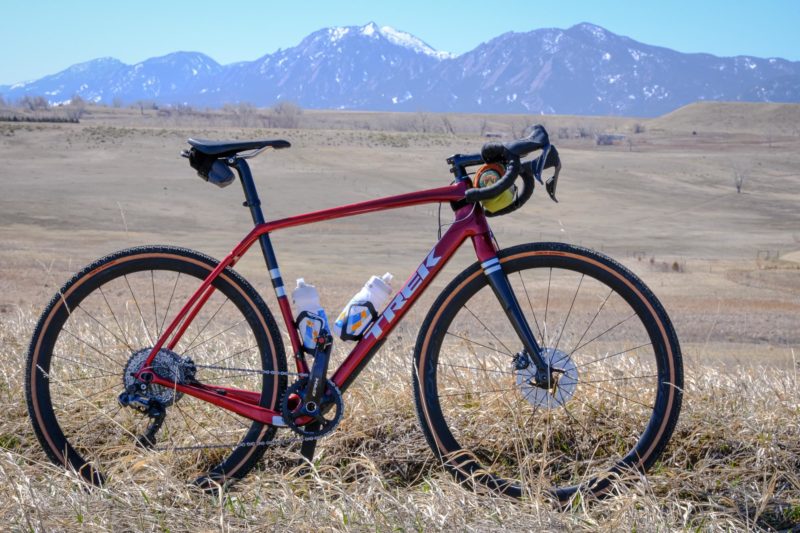 It’s pretty fun to be a gear tester in the age of gravel’s rapid birth and astronomical rise. Everyone’s got an opinion about what gravel is and what it should be. Perhaps Shimano has an outsized say in that narrative. With the launch of the GRX drivetrain, Shimano sent a loud message to the bike world: Gravel bikes deserve their own drivetrain. No more retrofitting.

A company makes such claims when it recognizes a certain type of riding isn’t going away. So drop-bar riding on dirt? Here to stay. (Yep, you can argue it never went away. I lived through the 90s and early 2000s too!)

That means the GRX drivetrain deserves analysis on its intended use, rather than against drivetrains retrofitted from the MTB or road world. And that’s what I’ve done over the course of the last year.

See it in action in my video review above, but keep reading for closeup photos and a few extra details not included in the video. 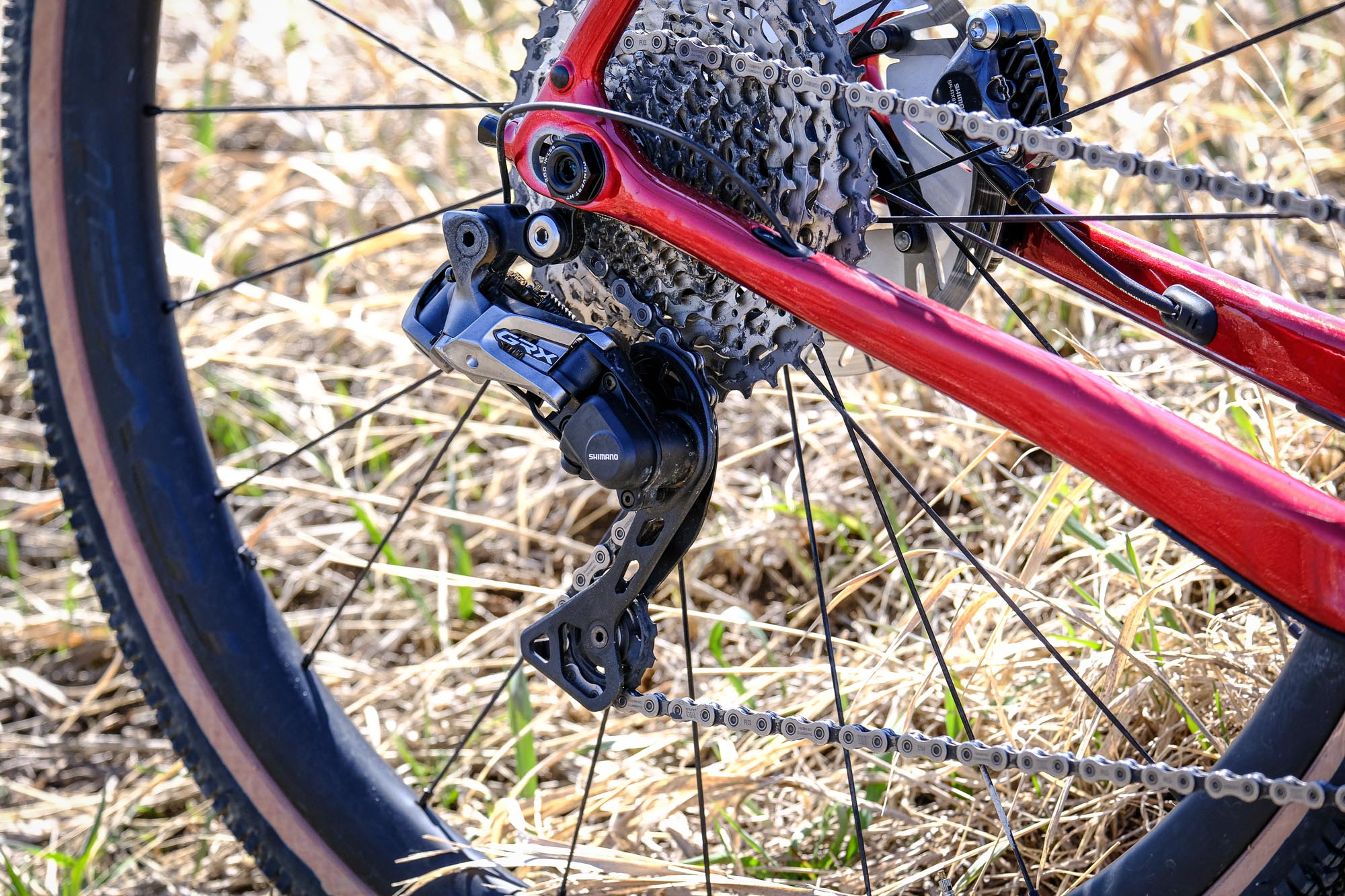 The rear derailleur features a clutch system. Engage the clutch to add tension to the cage and thus the chain, and disengage it to add slack to the system for easy wheel removal.

The GRX drivetrain looks a lot like any other drivetrain, which shouldn’t come as too much of a surprise. Gravel looks an awful lot like other types of riding, at least at first glance. But as is the case with gravel riding itself, the subtleties of the GRX drivetrain are what set it apart.

The controls exemplify the notion of subtlety nicely. Outwardly, the shape is much the same as Shimano’s other STI Di2 controls. But on further inspection, notable details stand out. The texturing on the brake hoods, for example, is meant to help you maintain a positive grip on rough terrain. The brake levers themselves have a flatter, wider shape so you can once again get a positive grip when the terrain gets chattery. 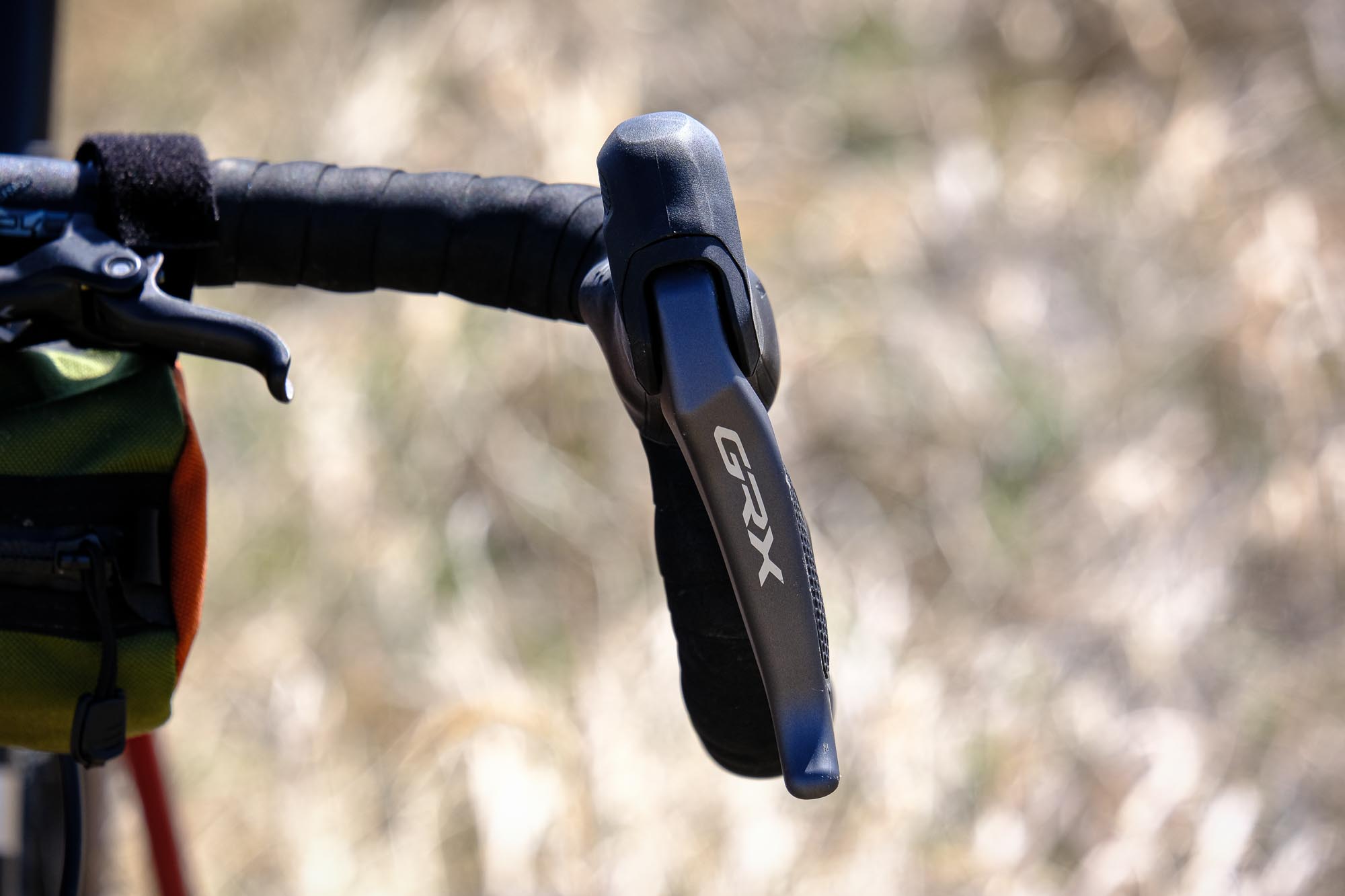 The GRX brake levers are wider than a road brake lever like Ultegra or Dura-Ace. They also curve in toward the handlebar to make them easier to reach and pull.

And those brake levers also cheat more inward toward the bars. That reduces the distance your fingers have to stretch to engage the levers. It also means you get better leverage, and hence more braking control when you need it.

The hoods too have a different shape. But Shimano also wisely includes shift buttons here, as they do on road groupsets. The shape of the hood encourages your hand to ‘slot’ into place. It’s a comfortable cradle and allows a firm grip over rough terrain.

If you’re the type to spend a lot of time on the bar flats, Shimano’s got you covered with specially-designed inline brake levers. These optional levers are small and offer another braking option when your hands are away from the hoods.

The rear derailleur features a clutch system. This essentially adds tension to the derailleur cage, thereby increasing the tension on the chain. This helps reduce dropped chains, which is a must-have when you’re riding off-road. 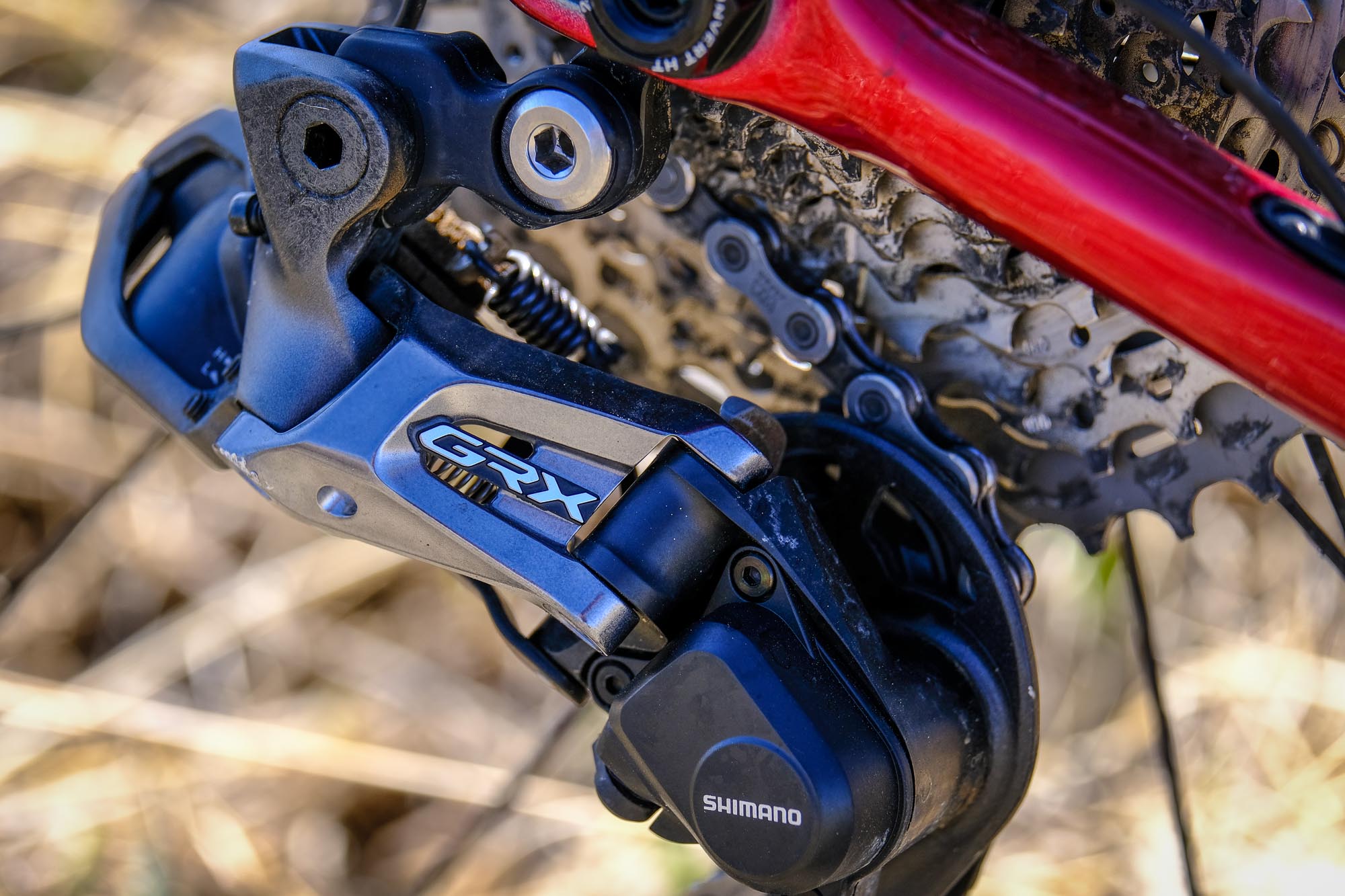 You can see the gray lever that activates and deactivates the clutch tucked behind the parallelogram pivot points.

Since the cassettes are existing 11-speed MTB or Road cassettes, they also use the existing HG freehub spline meaning you probably won’t have to buy a new freehub to run the group. Which is nice.

Di2 wiring remains the same as other Shimano electronic groupsets, so no surprises here.

The standout features of GRX Di2 are fairly subtle. The texturing on the brake hoods is a great example of a clear advantage to a dedicated off-road groupset. The lever shape and hood shape further complement this, and you’ll notice an increase in hand stability and the ease with which you’re able to maintain grip on the bars.

GRX is versatile, too. It is just as at home on a cyclocross bike as it is on a gravel bike. I rode a fair bit of pavement with it too. My only complaint there is that it was easy to spin out, but if I was going to spend more time on pavement, I could make changes to my gearing choices.

And of course, Shimano’s legendarily smooth shifting and strong braking make GRX a clear winner off-road. I even bashed the rear derailleur a fair few times, and it still shifts like a dream.

What are the drawbacks? 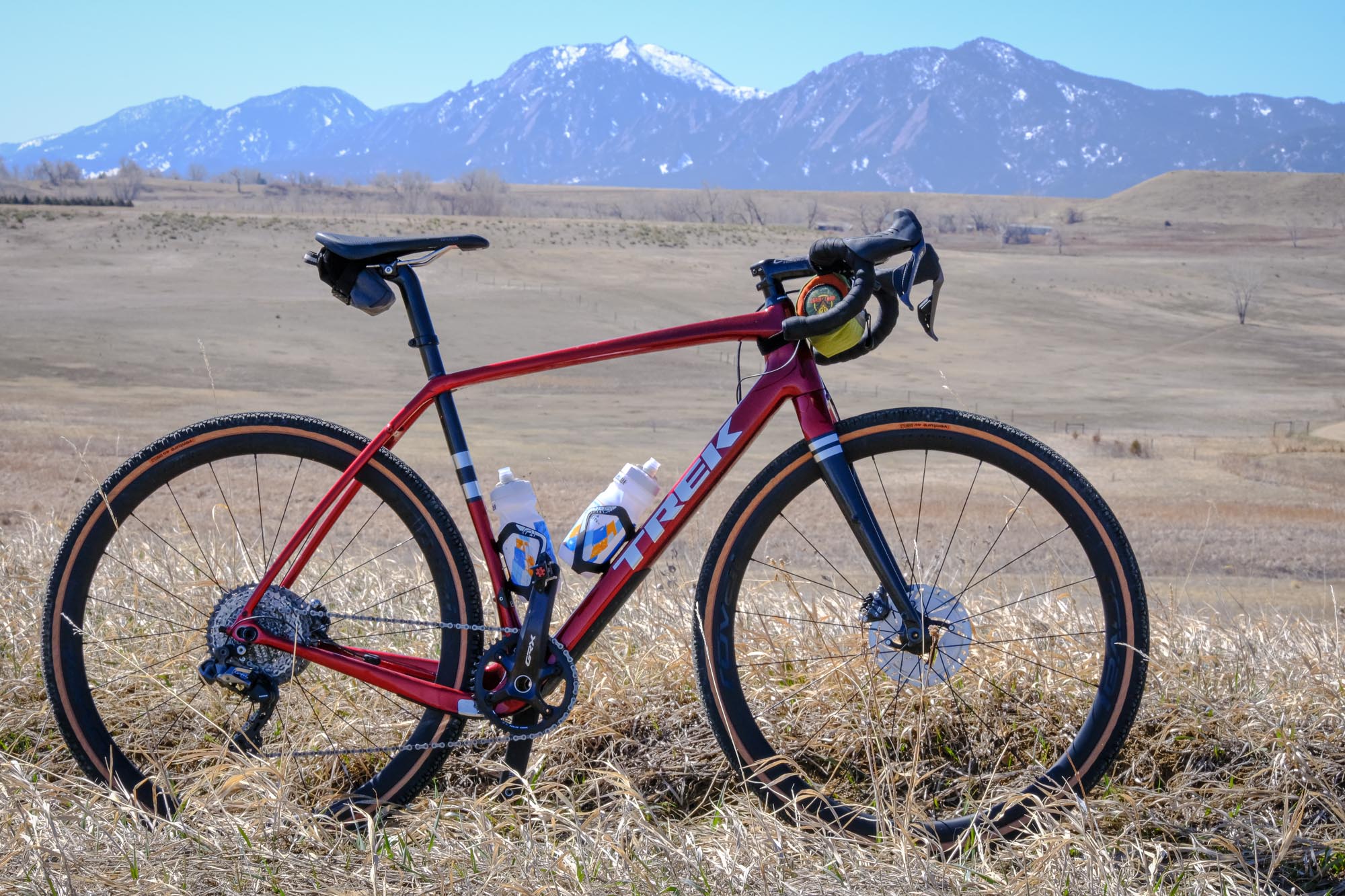 If you look closely at the head tube, you can see one of the Di2 wires. I found this annoying, but it’s by no means a dealbreaker.

Despite all the awesome stuff, GRX Di2 does have a drawback or two. The first and most significant is the same drawback of every Di2 drivetrain: The wiring.

While the wires help make for crisp shifts, they are also a pain to route through your frame. And there are lots of them, with junction boxes interspersed throughout. So initial setup takes some time and patience. Once it’s done, you likely won’t think too much about it, and I don’t — except when I look down at my head tube and see a wire dangling there. But if you’re not setting up the drivetrain yourself, you likely won’t think much about the wires at all. 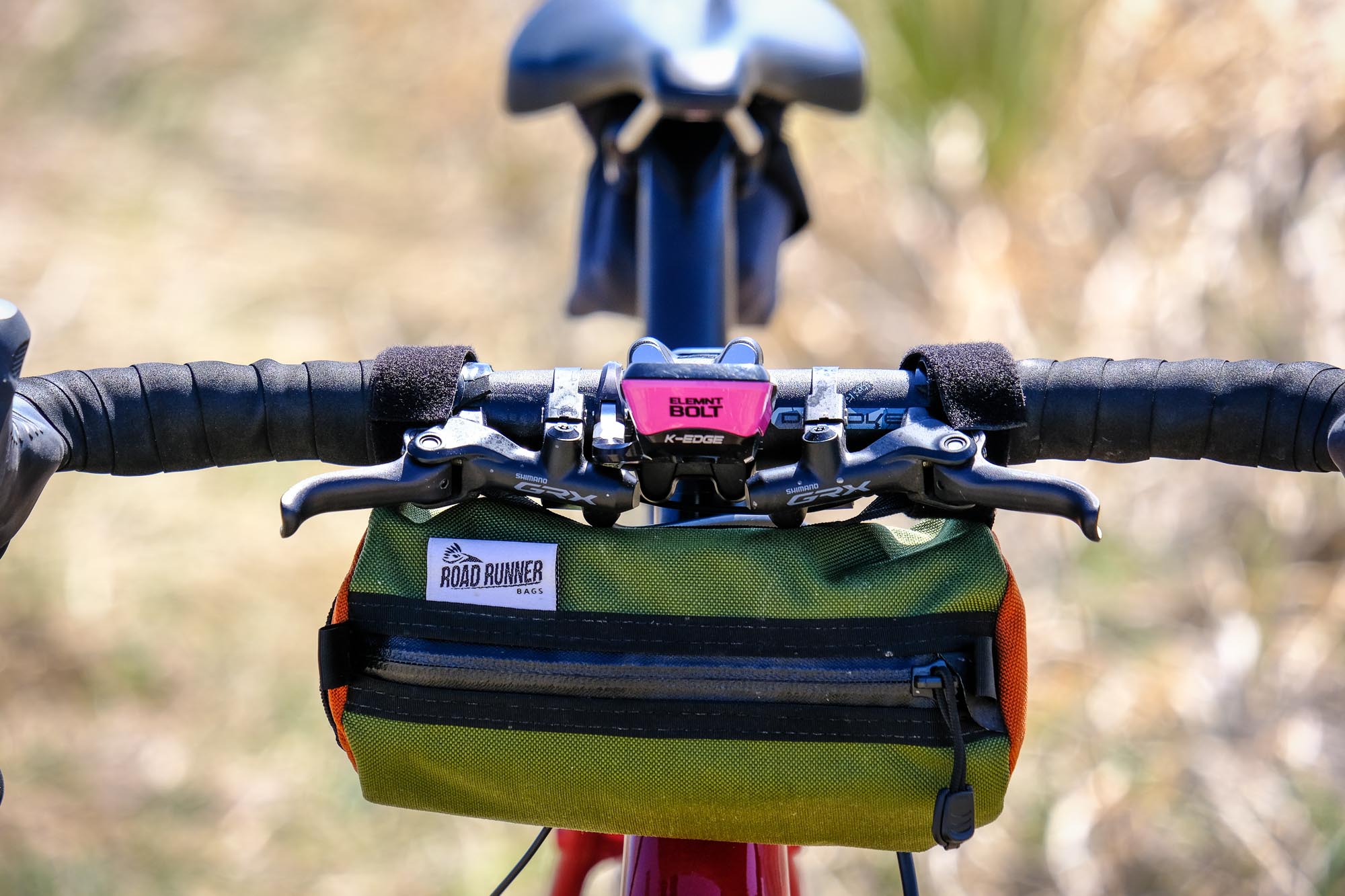 The bar flat sub-levers feel great and are a perfect size. But I didn’t end up using them very much.

The other drawback isn’t really a drawback. The brake levers on the flats are cool, but I can’t figure out why I would need them. They feel great and offer lots of braking power, but after using GRX Di2 for almost a year, I can count on my left hand how many times I’ve used these levers on the dirt and still have plenty of fingers left over. You may find a useful situation for them, but I never did.

Of course, now that they’re installed, it’s pretty involved to take them off. So they remain on my cockpit, even though I never use them. 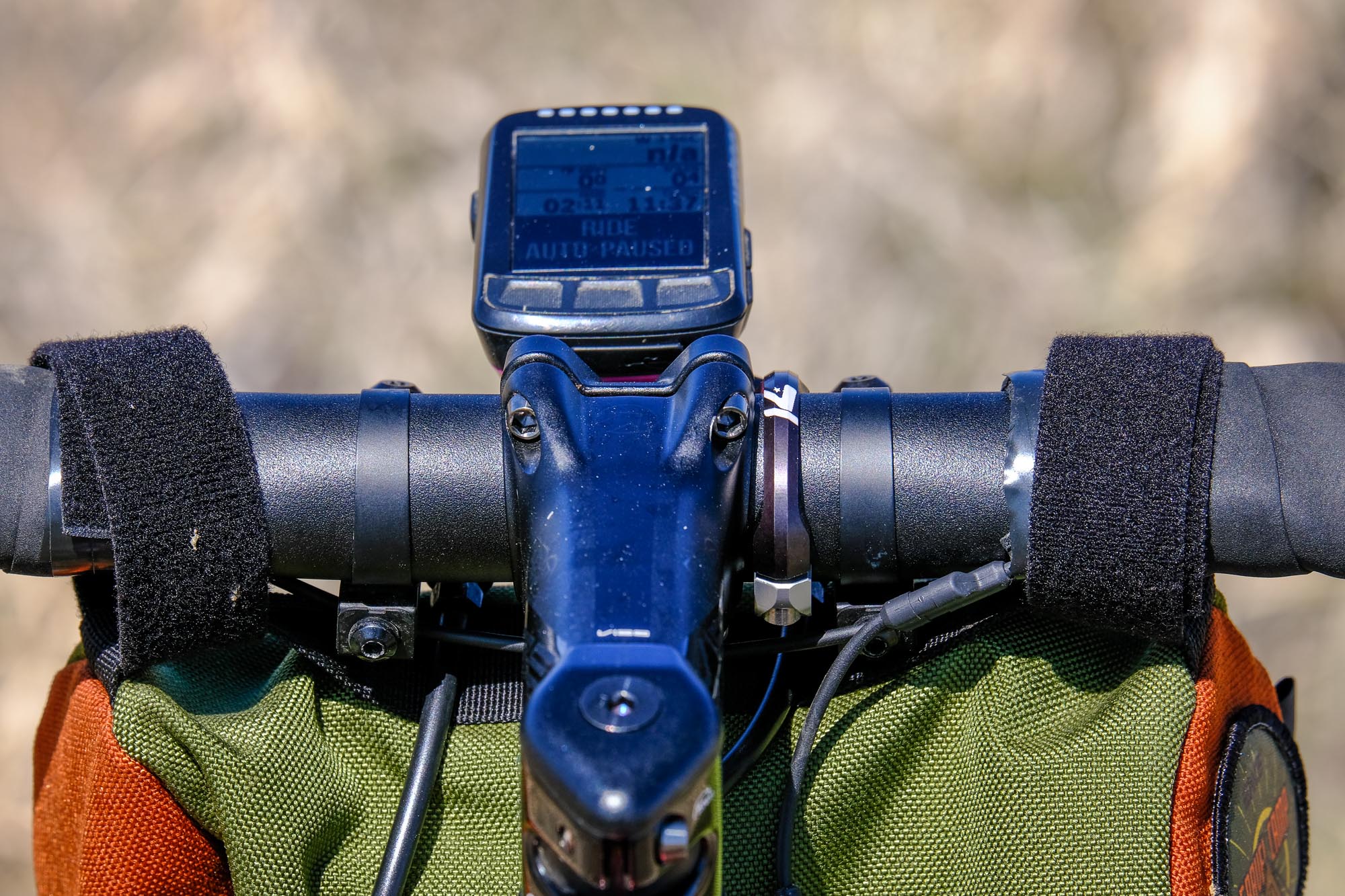 While the bar top brake levers feel excellent, I don’t use them enough to justify having them there. If they were easier to remove, I’d take them off so I have more room on my cockpit for my handlebar bag and computer mount.

GRX on the dirt 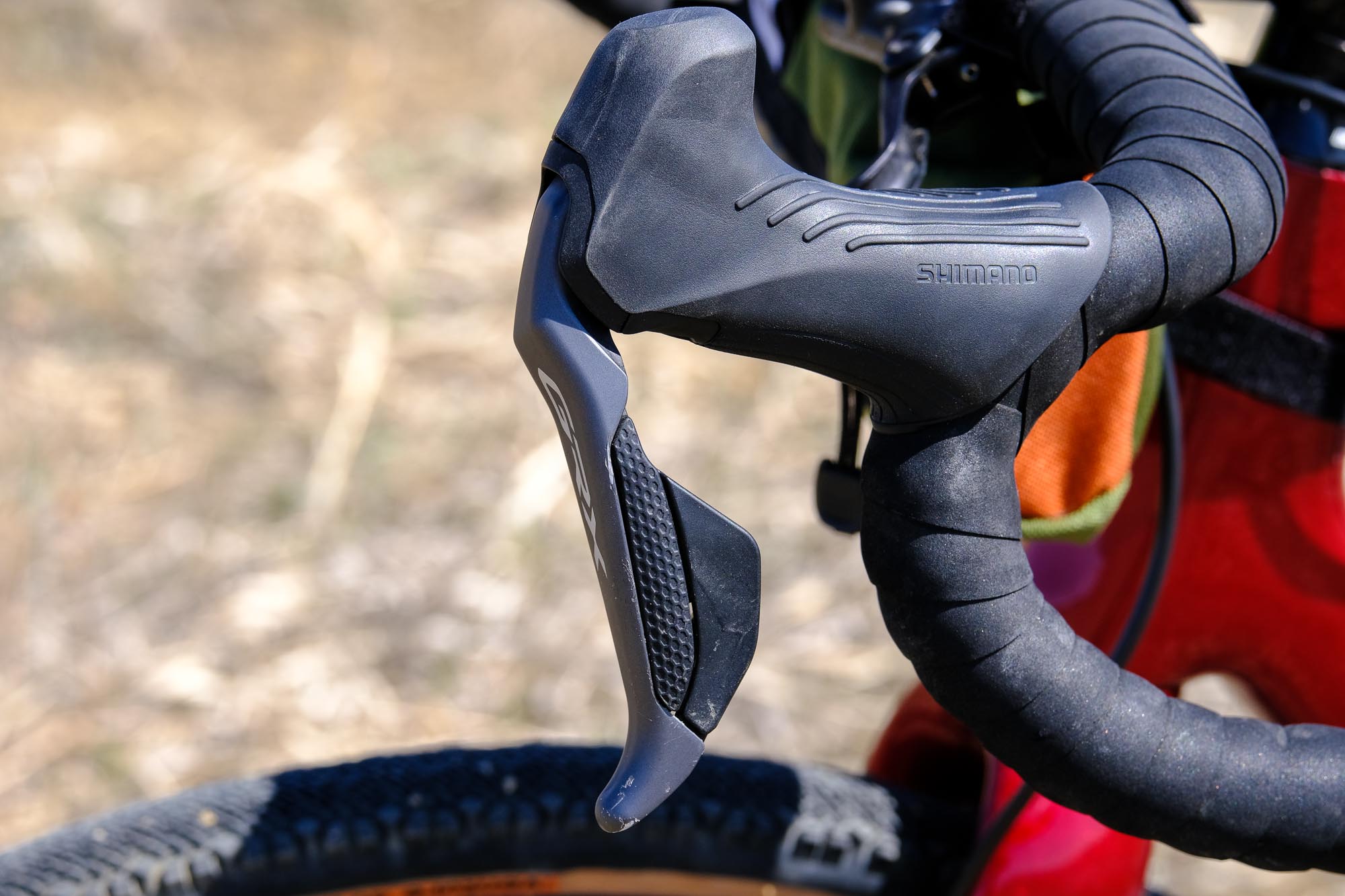 I’ve spent almost the entirety of my gravel rides in the last year on GRX Di2. There’s plenty of it to explore here in Colorado, and fortunately, I’m spoiled with a wide variety of gravel conditions. From flat, semi-groomed dirt roads to chunkier singletrack I probably shouldn’t have ridden on a gravel bike, we’ve got it all here. (Well, except for super muddy conditions. East coasters, feel free to chime in with your take in the muck.)

It’s safe to say that if you’ve ridden any other Di2 system from Shimano, you’ll know exactly what to expect from GRX Di2. It shifts just as smoothly and quickly as its siblings, and battery life seems to go on and on. Shimano is still the king of the castle when it comes to the shifting experience and battery life.

I would like to see a single-button version of the shifters, though. In other words, a similar system to SRAM’s eTap paddles would be advantageous here. That’s largely because it’s easier to hit one paddle rather than select between two smaller ones, especially off-road and when you’re wearing full-finger gloves.

It’s not hard to shift GRX Di2 with the number of buttons currently offered, but it could be simpler. Plus, with a 1X setup, a lot of the buttons become extraneous anyway.

Do we need dedicated gravel drivetrains? 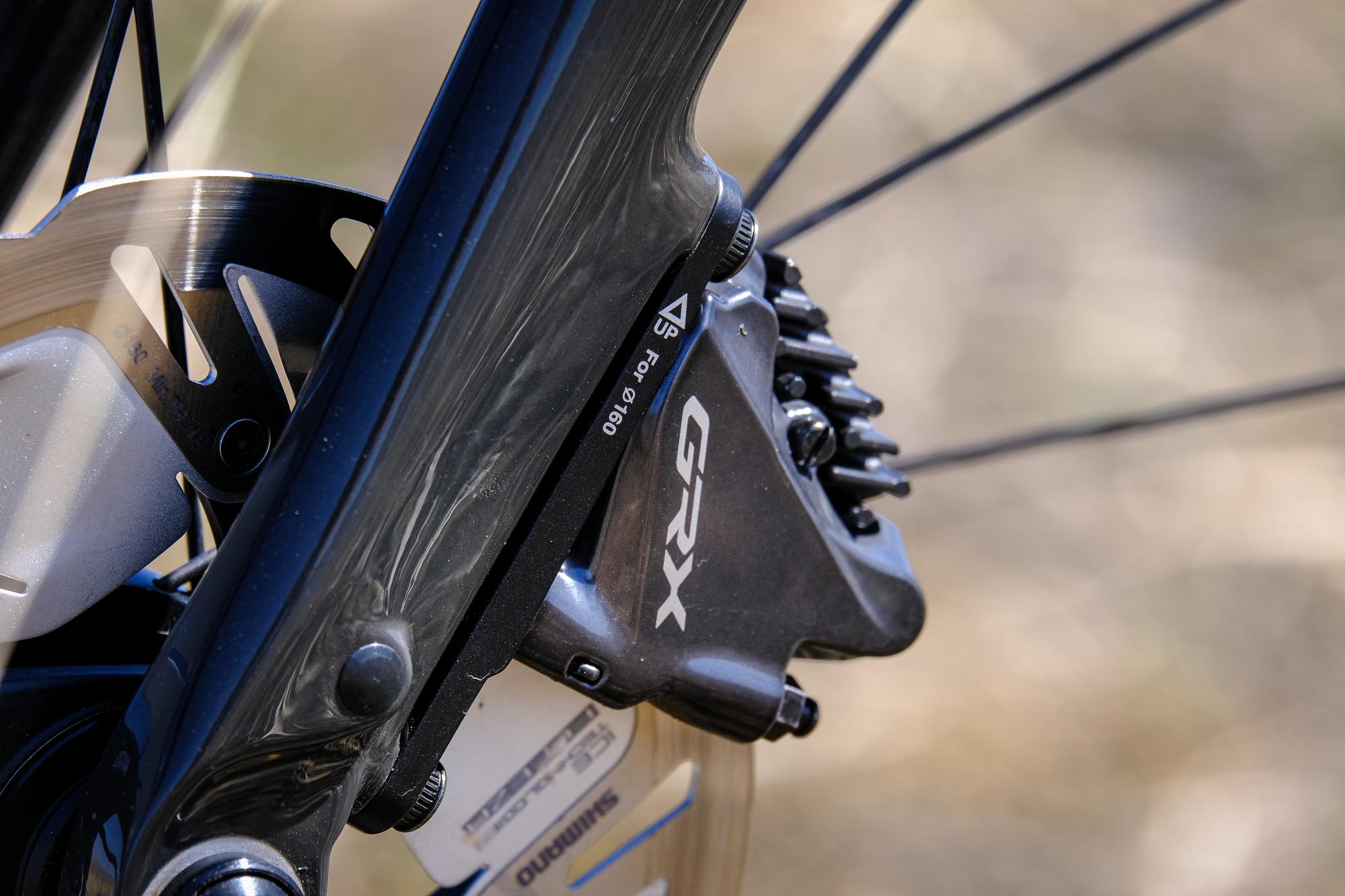 The braking on Shimano’s GRX groupset is superb. I would go so far as to call it one of the most standout features.

Don’t ever let anyone tell you that you need to run out to buy a gravel drivetrain. It’s not a necessity when it comes to gravel bikes. But it sure is nice to have it.

You can absolutely make a road drivetrain, or a road/MTB hybrid drivetrain, work just fine for your gravel needs. But there are two compelling reasons to invest in a gravel drivetrain.

First, if you’re going to buy a gravel bike in the future, it’s likely that bike will come with a gravel-specific drivetrain anyway. So you’re opting in whether you like it or not. 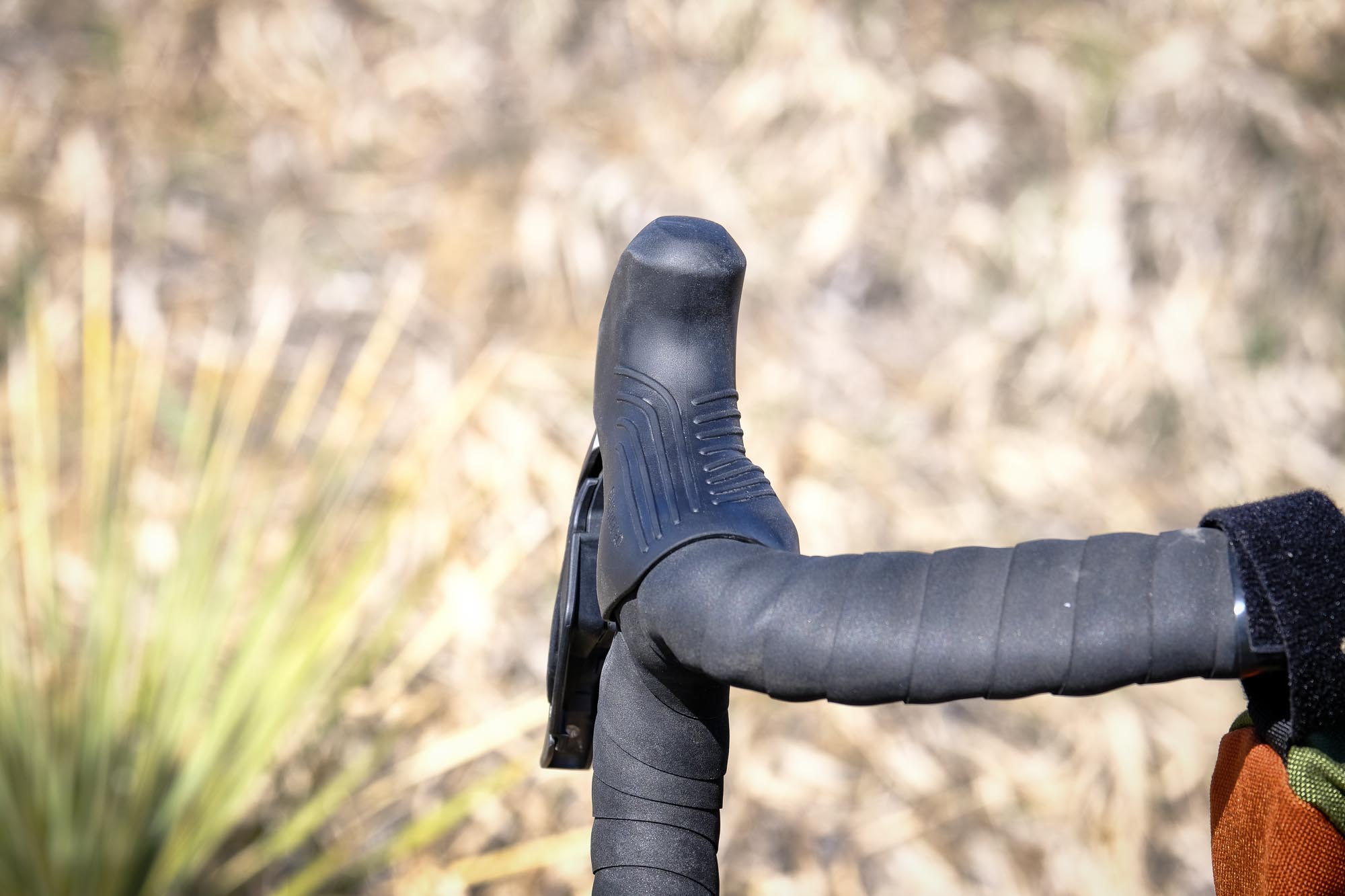 I’m a big fan of the prominent brake hood texturing. I have heard some riders complain that the texturing is too prominent, leading to hand discomfort. But I never experience this.

As a bonus, GRX Di2 works wonderfully as a cyclocross drivetrain, too. So if you want a single drivetrain to do it all, GRX is certainly a workhorse in that regard.

The final word on GRX 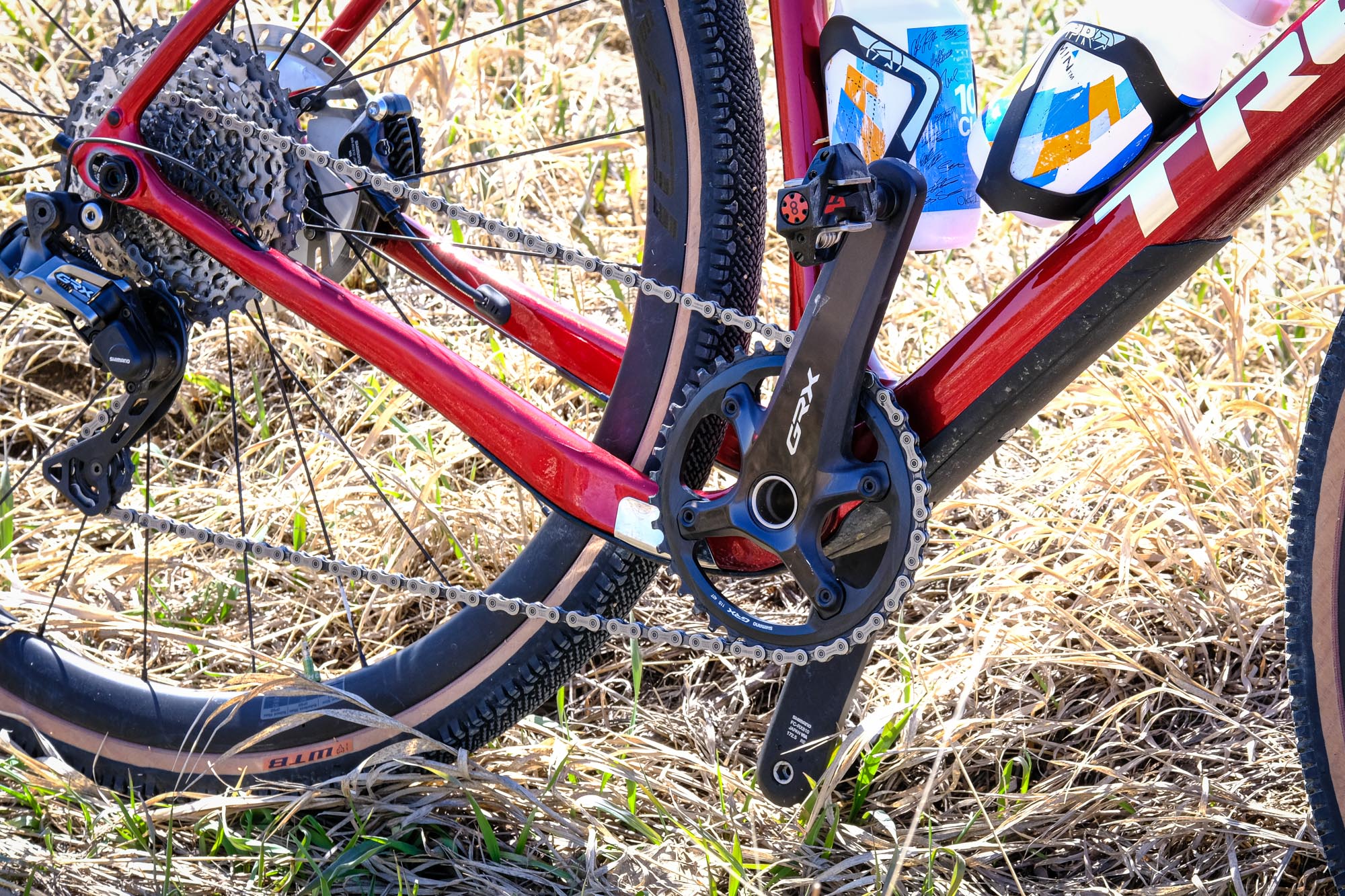 Shifting is impeccably smooth. I rode a 1x setup with a 40T ring up front and an 11-40 cassette.

I’ve very much enjoyed the last year of riding with GRX Di2. It does everything I want it to do, reliably every time. And I appreciate the subtleties that Shimano has packed into the overall group that make it dirt-worthy. I’m especially a fan of the textured brake hoods and the shape of the brake levers themselves.

That said, I wouldn’t call GRX Di2, or any other gravel-specific drivetrain, truly necessary. You can absolutely get away with using a road drivetrain, or a Frankenstein setup that combines a road and mountain bike setup. But if you’re after something more streamlined for gravel, something that was made specifically for this growing segment, it’s hard to beat GRX Di2. If you want to simplify your setup, opt for the mechanical drivetrain instead. But if the smoothest shifting possible is high on your list, GRX Di2 takes the cake. 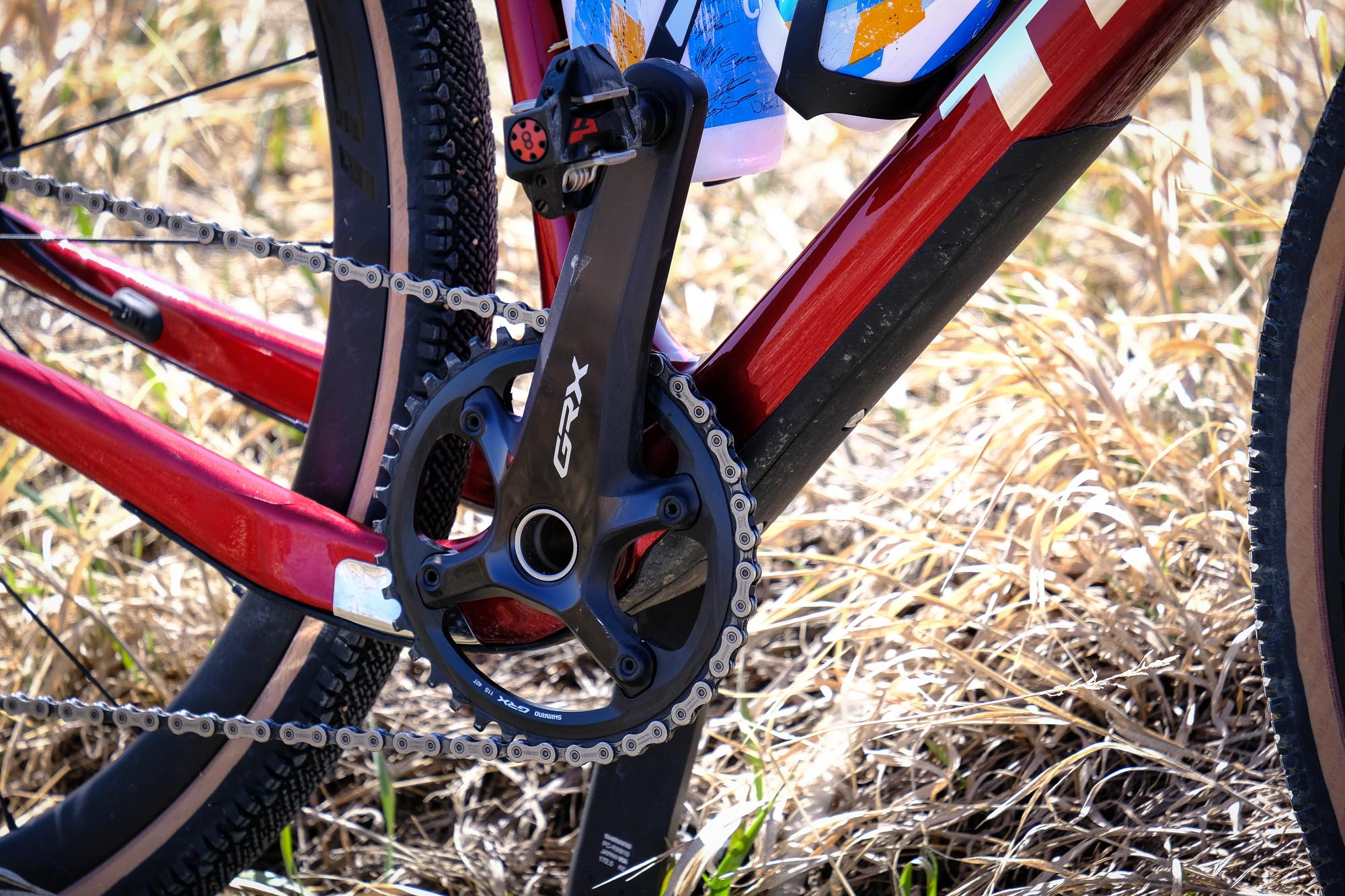 I chose a 40T chainring up front for my 1X setup.