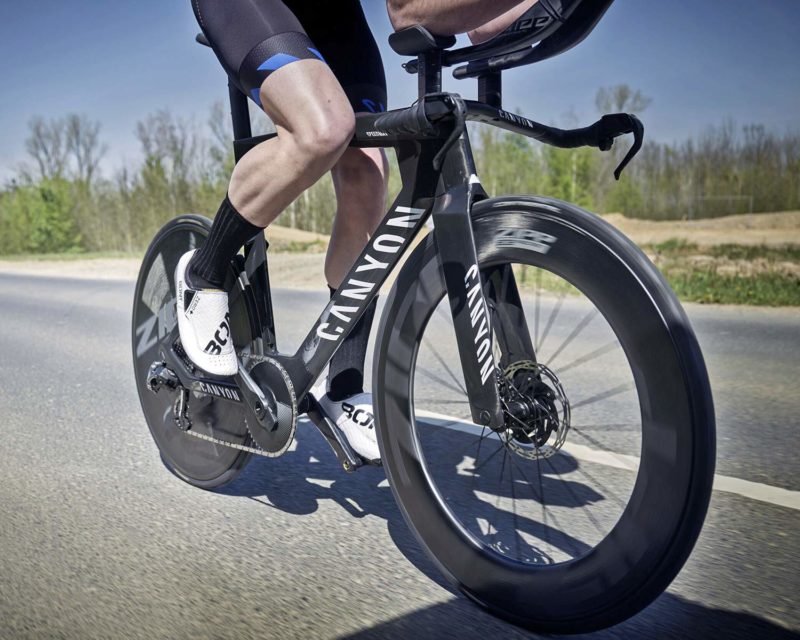 Canyon pro cyclists can now race an all-new, faster UCI-approved time trial bike with the addition of the Speedmax CFR TT Disc to the 2021 line-up. Introduced in a triathlon-only version just last autumn, the latest carbon Speedmax time trial bike has slimmed down the frame’s webbing, removed the extra storage, and ironed out the cockpit tweaks needed to appease the UCI so roadies can race the season’s key TT stages of the upcoming Grand Tours on the new bike. Integrating SRAM Red AXS and the latest, fully adjustable Zipp aero bars, even a Zipp disc rear wheel, this promises to be a super-fast TT build… 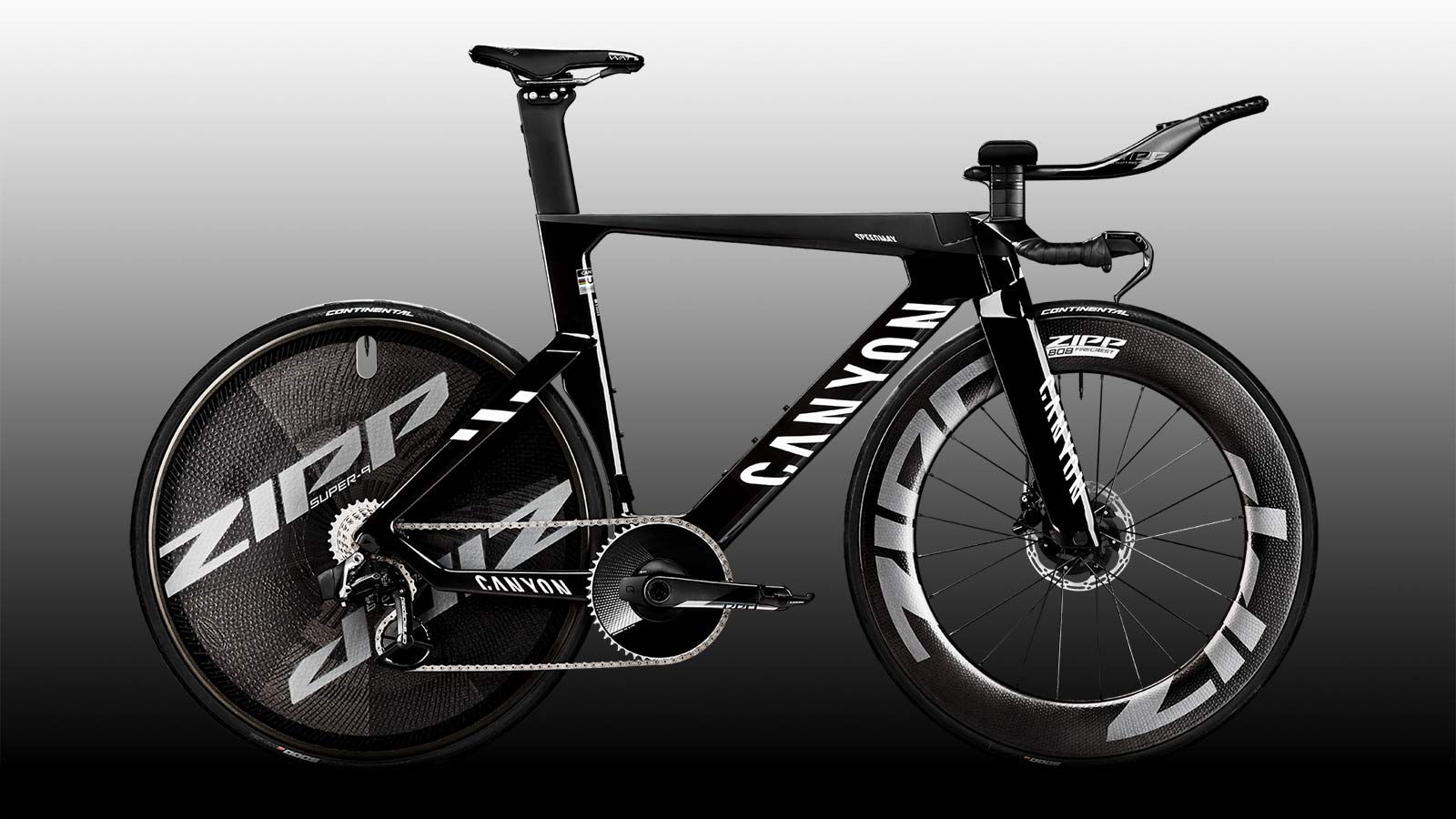 The biggest change vs. the triathlon Speedmax CFR is the removal of some of those deep webs connecting one frame tube to the next to fit within the UCI’s mildly flexible 3:1 & min 1cm/max 8cm rules.

With that comes the removal of integrated storage compartments – the top tube now simply gets closed off, and the web above the bottom bracket between down & seat tubes is gone altogether. 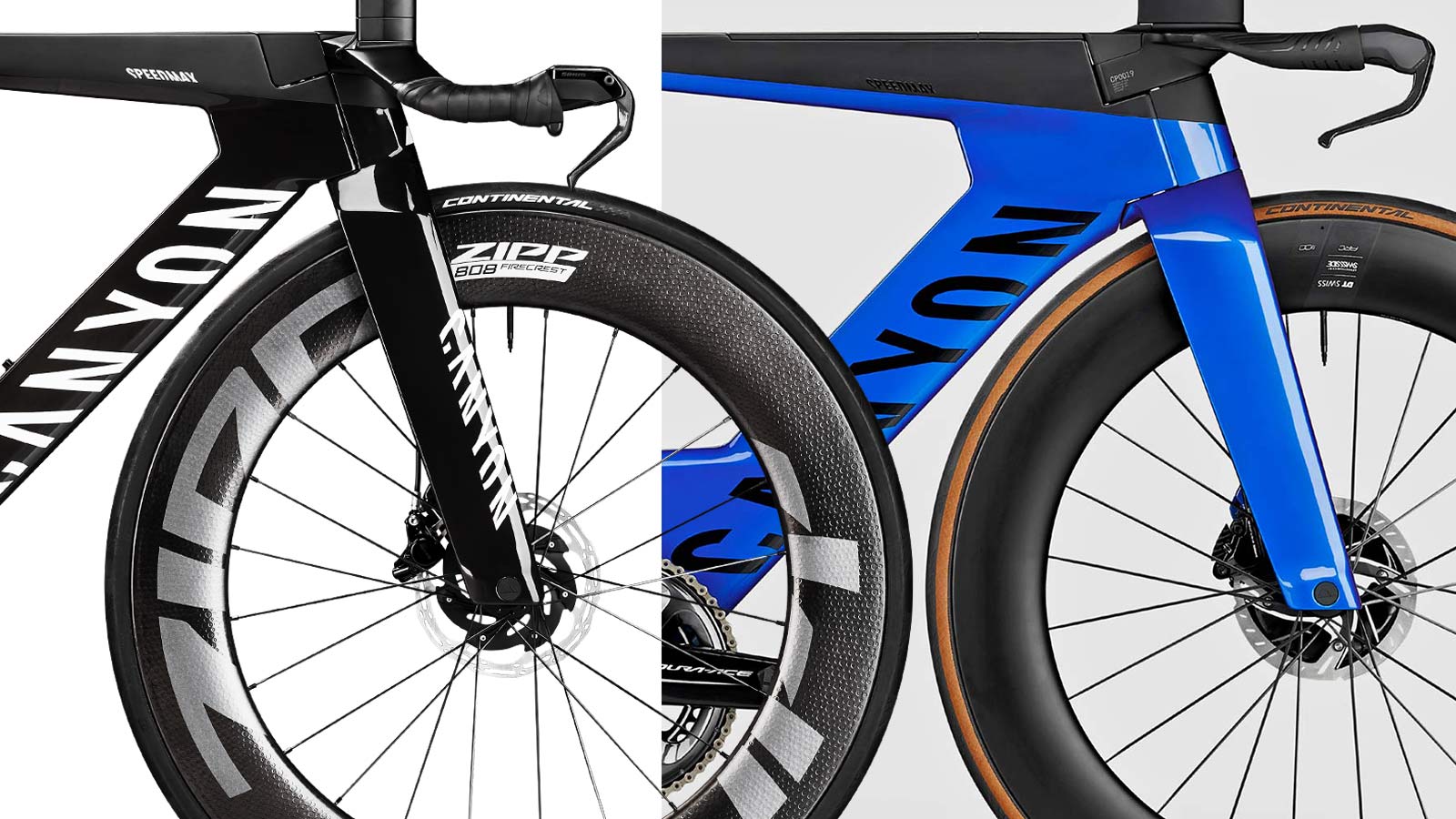 In a more subtle change, the small fin at the back of the tri fork crown has been chopped off as the deep fork blades stay inside the UCI-allowable profile, as has the transition in the shaping of the downtube. 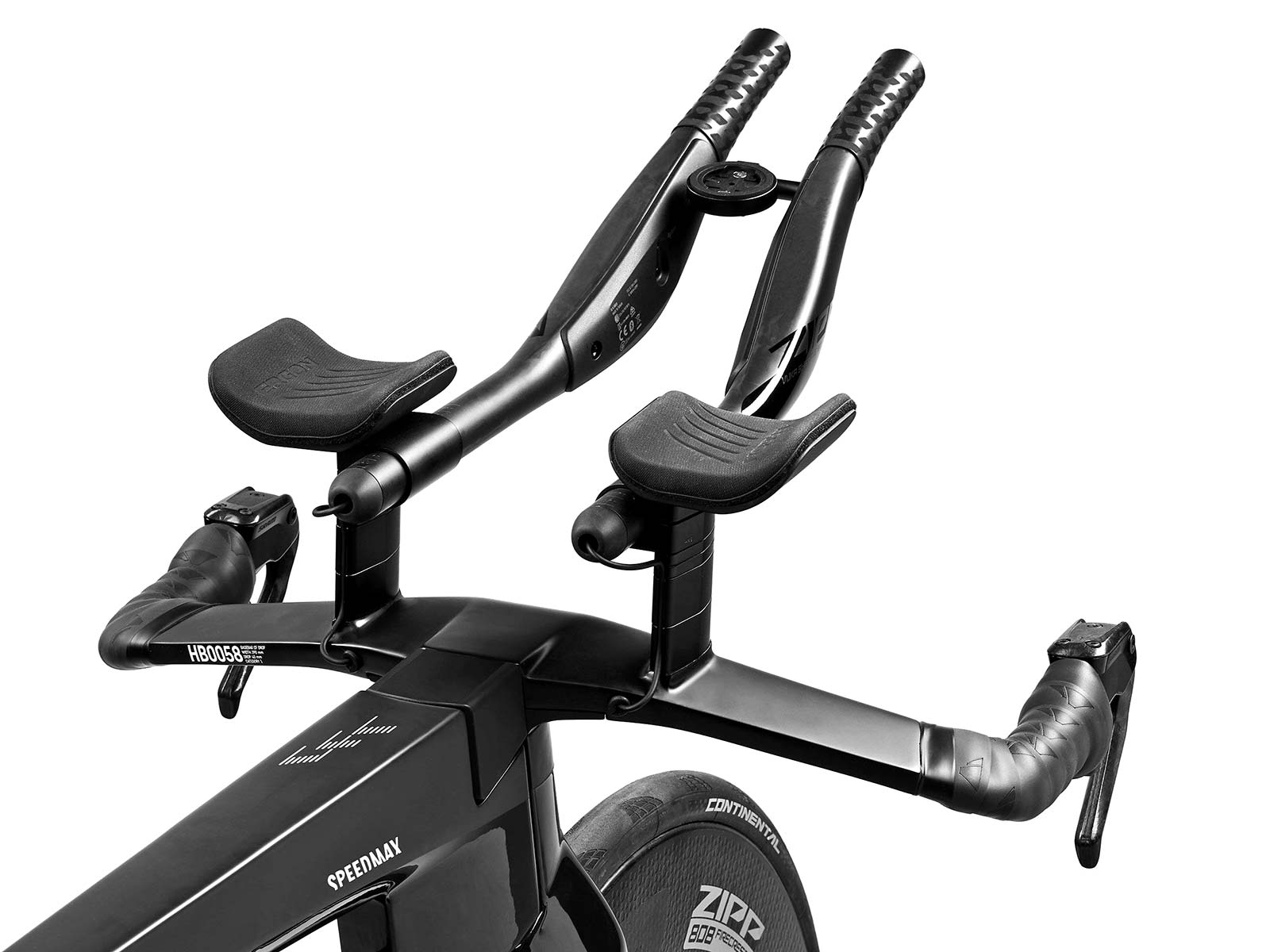 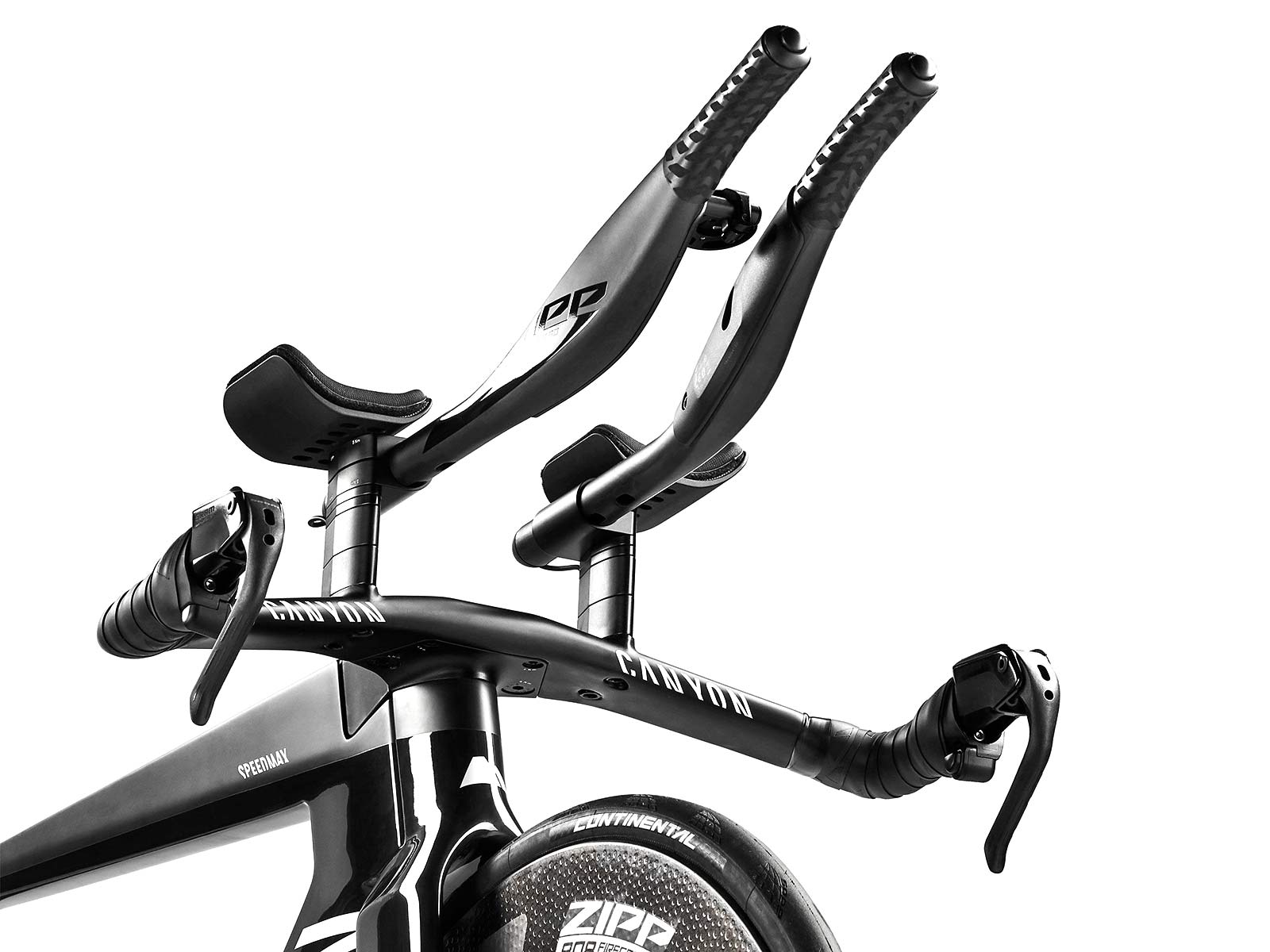 Designed to allow you to dial in the perfect position, individual riders can mix & match various risers, spacers & armrests combined with the latest Zipp Vukashift aero extensions that tuck all of the SRAM AXS wireless electronics inside so you don’t also need an extra blip box to control it all.

UCI approval for time trial racing, but only to a limited extent 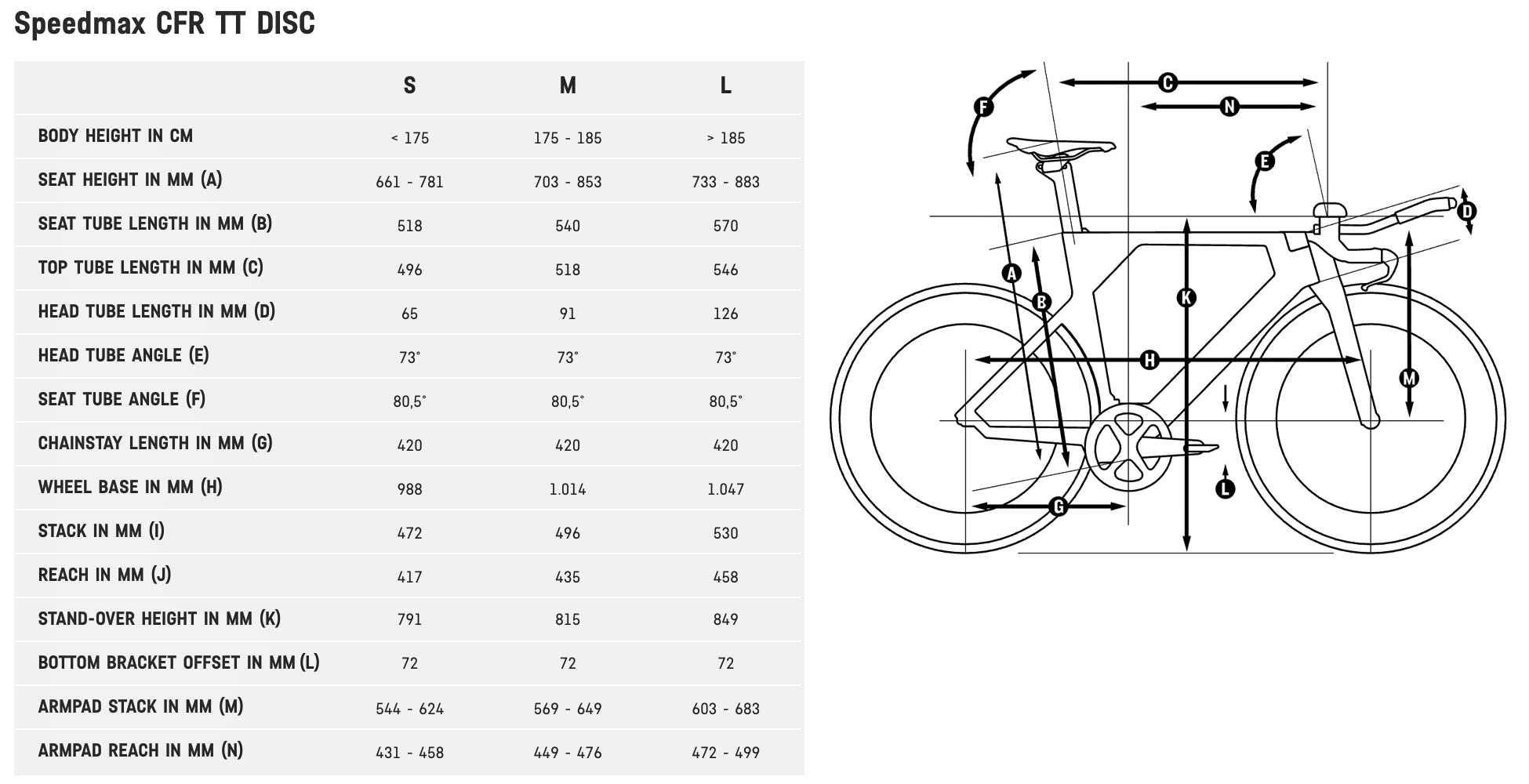 The latest Canyon Speedmax CFR TT time trail bike officially received UCI approval in mid-May, but only for the top tier CFR Disc frameset, and only for the middle three frame sizes S, M & L. It’s unclear why the XL or 650b-wheeled XS did not go through the approval process, but likely Canyon prioritized approval of the sizes their men’s pro teams needed ahead of the upcoming Grand Tours and the rescheduled summer Olympics.

Riders outside of those sizes, or who can’t afford the astronomic price tag of this TT bike will still have to stick to the previous generation Speedmax with rim brakes, which was the last to get UCI approval all the way back in 2016. 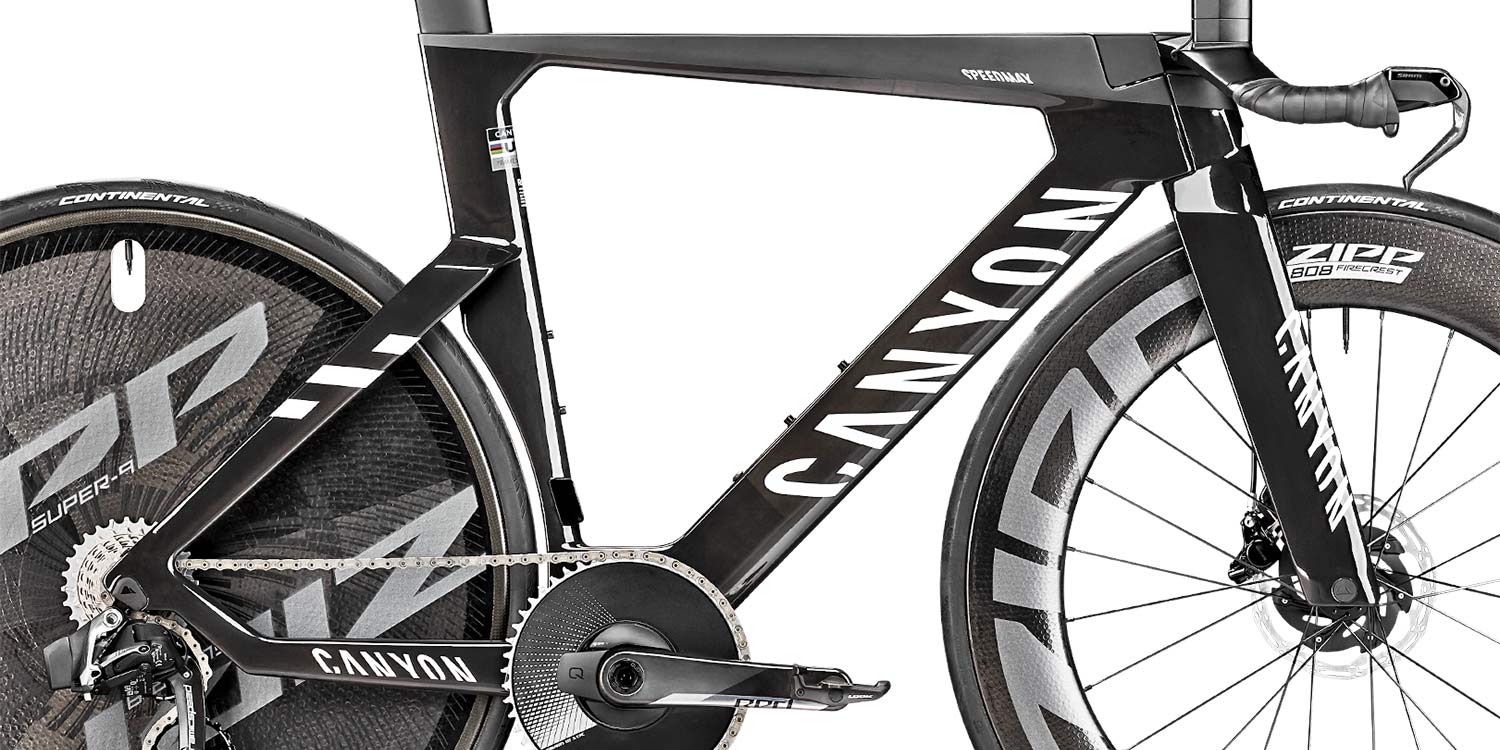 Like we saw when the integrated triathlon version debuted back in November, this TT version shares the same general CFR frame & fork designs and tech. Part of their CFR Canyon Factory Racing lineup, Canyon says the new top-tier Speedmax features their most premium carbon mix, including “ultra-rare Toray M40X carbon fibres”. Designed in CFD with Swiss Side, then tested in the wind tunnel, Canyon calls it their fastest ever bike.

The Canyon Speedmax CFR TT Disc gets fully internal cable routing, 12mm thru-axles, flat mount disc brakes, and a straight 1 1/8″ steerer, with a claimed medium frame weight of 1030g. Of note, the Speedmax CFR TT Disc does not include… the built-in tool storage above the bottom bracket, the hydration, fuel & spare parts storage in the top & down tubes, or the ultra-aero travel-friendly single mast modular aero bar riser & extensions of its triathlete sibling. 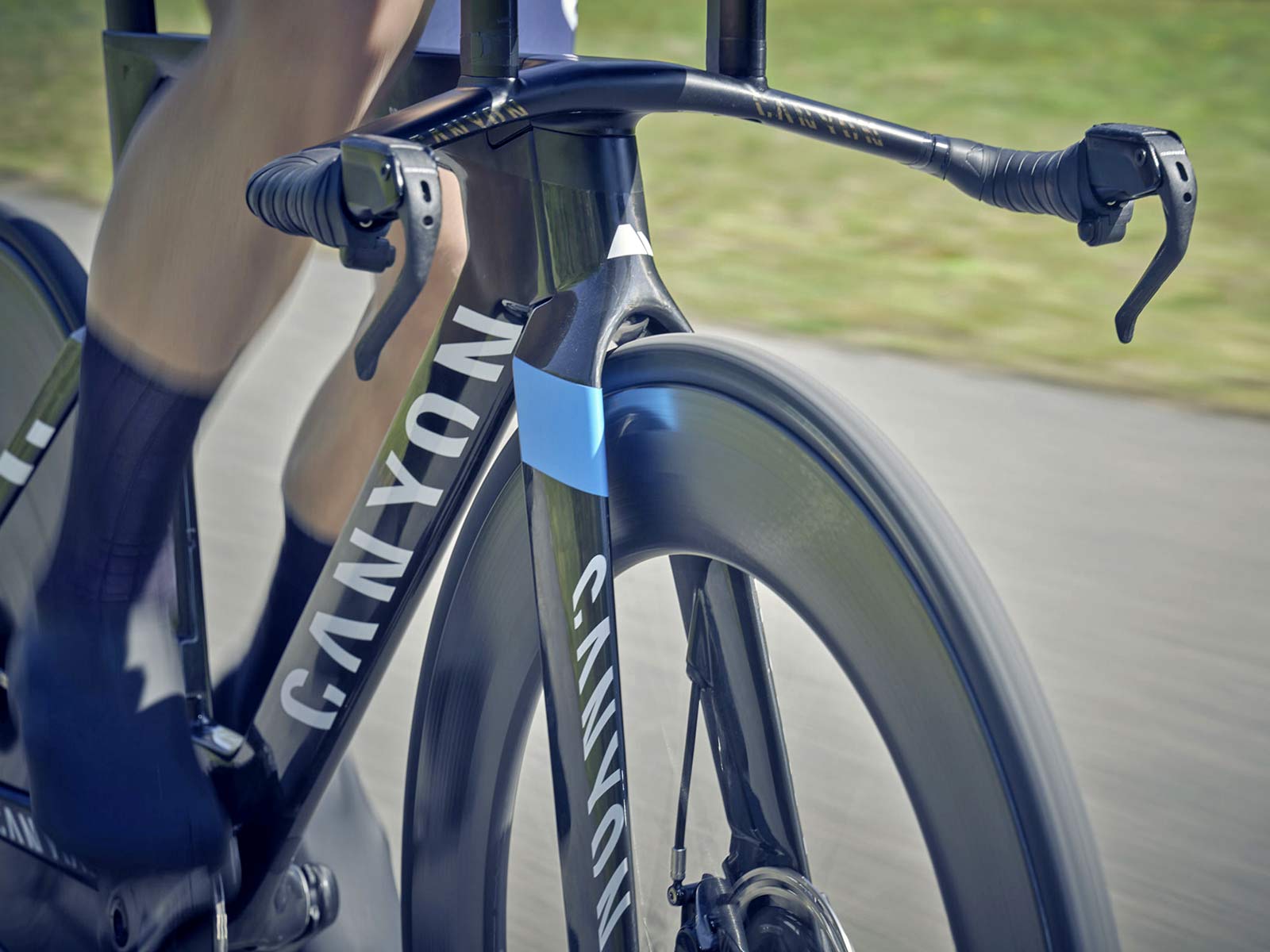 The new UCI-approved version of the Speedmax Disc doesn’t come cheap. Only one complete bike build has been officially announced so far – the 9999€ Canyon Speedmax CFR TT Disc. With that high sticker price does come an exclusive halo-level build, though.

The 2021 Canyon Speedmax CFR TT Disc gets a deep carbon Zipp 808 Firecrest front wheel paired to the carbon disc Super-9 rear and 25/28mm Continental GP 5000 tires. The wheels are both now tubeless-ready, but the tires spec’d are not. 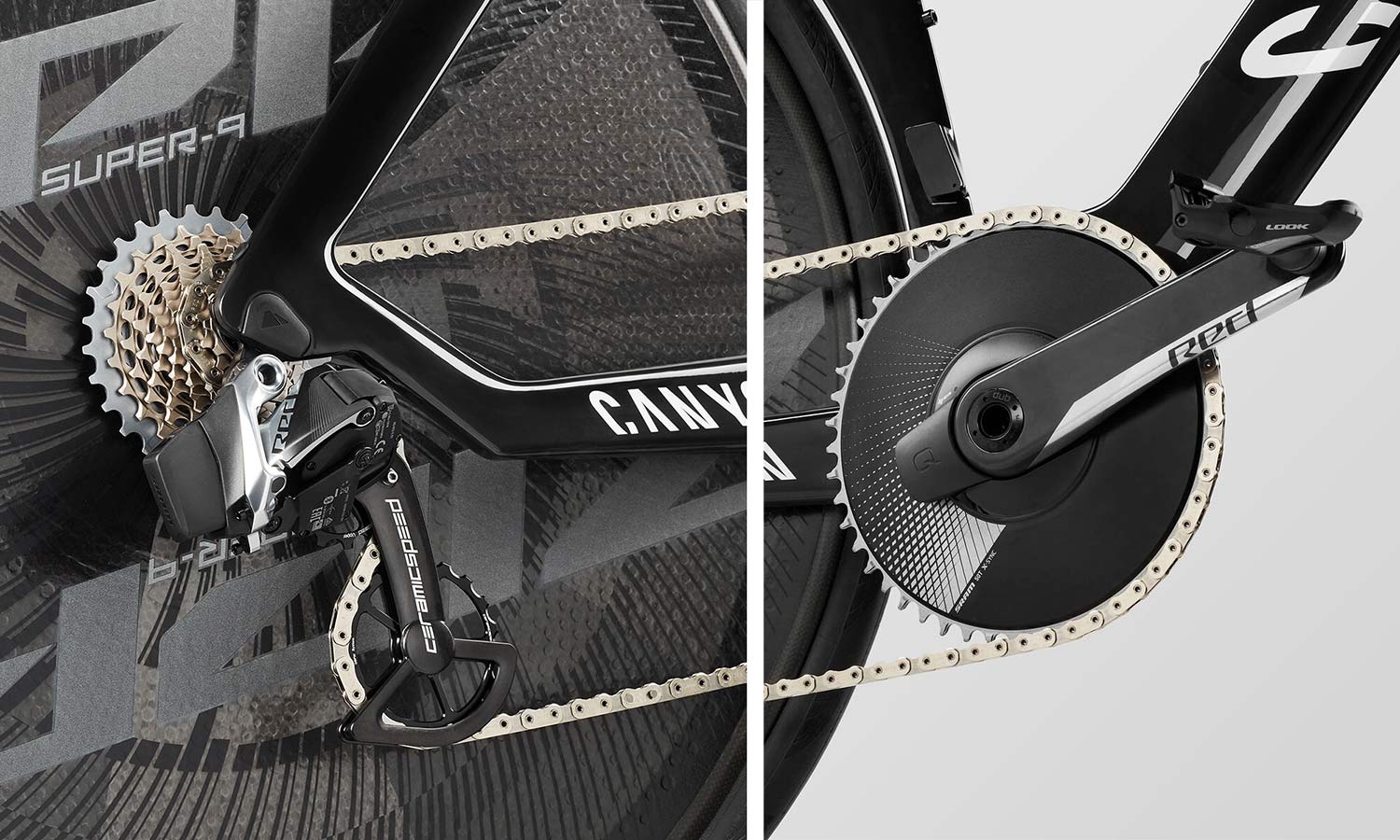 It also features a top-shelf SRAM Red AXS wireless drivetrain paired to the Zipp Vukashift extensions, including shift buttons on both the extensions and base bar. The 1×12 setup pairs a 50T aero single front chainring with integrated Quarq power meter, a set of Red crankarms, a tightly-spaced 10-28 cassette, and a Red AXS rear derailleur with a CeramicSpeed OSPW cage (that can fit a 10-36 cassette). 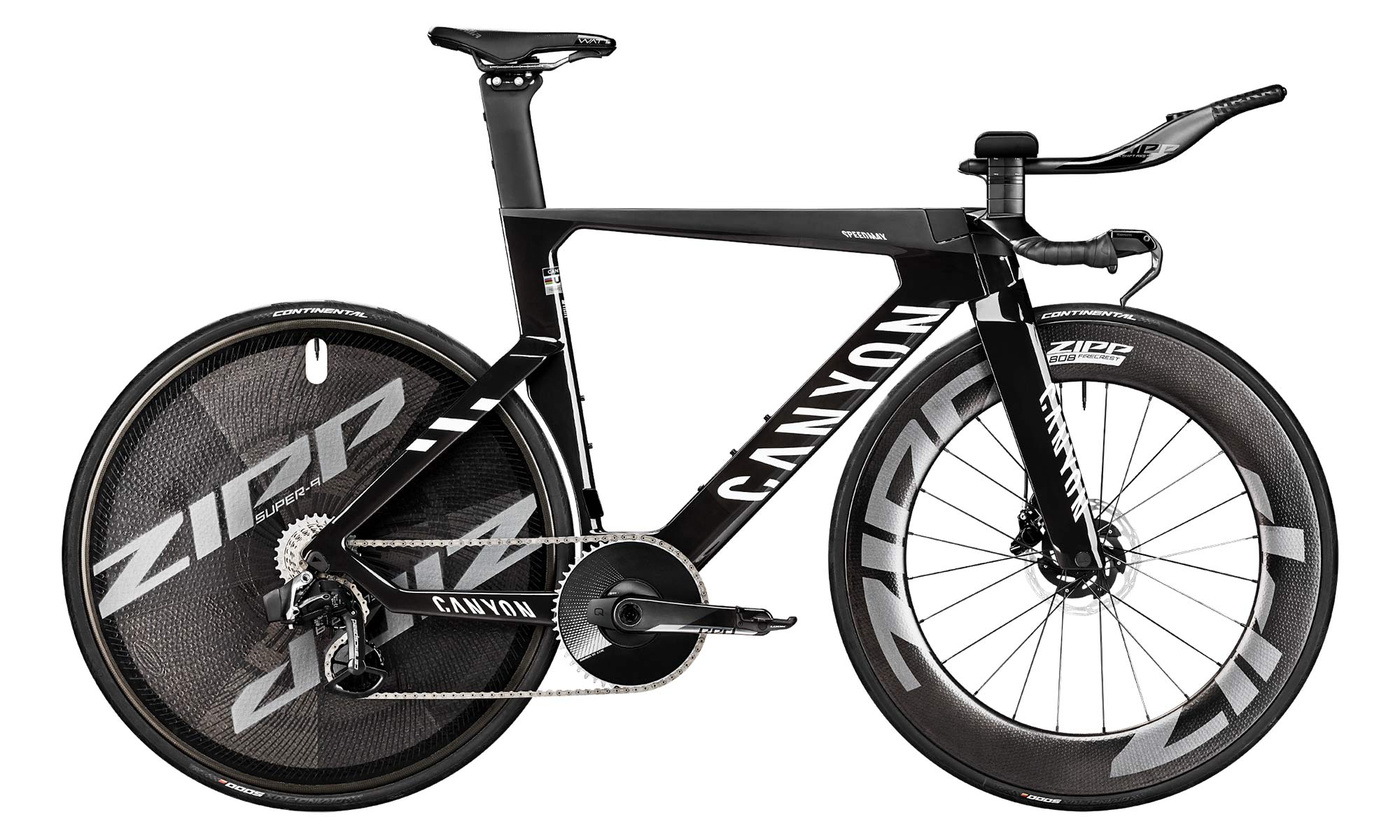 The complete time trial bike has a claimed weight of 8.62kg (19.0lb) and will be available in Europe first, starting in July 2021.