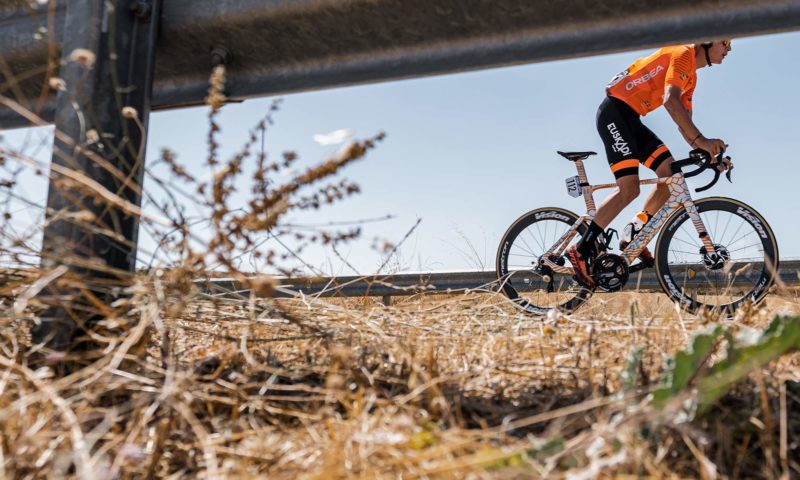 Euskaltel Euskadi has shared a few photos from La Vuelta España over the weekend that seem to show a next generation Orbea Orca Aero prototype being raced at the Spanish Grand Tour. It’s been three years since we saw Orbea add disc brakes to their aero road bike, and now it looks like a complete overhaul is coming soon, with dramatically reshaped profiles… 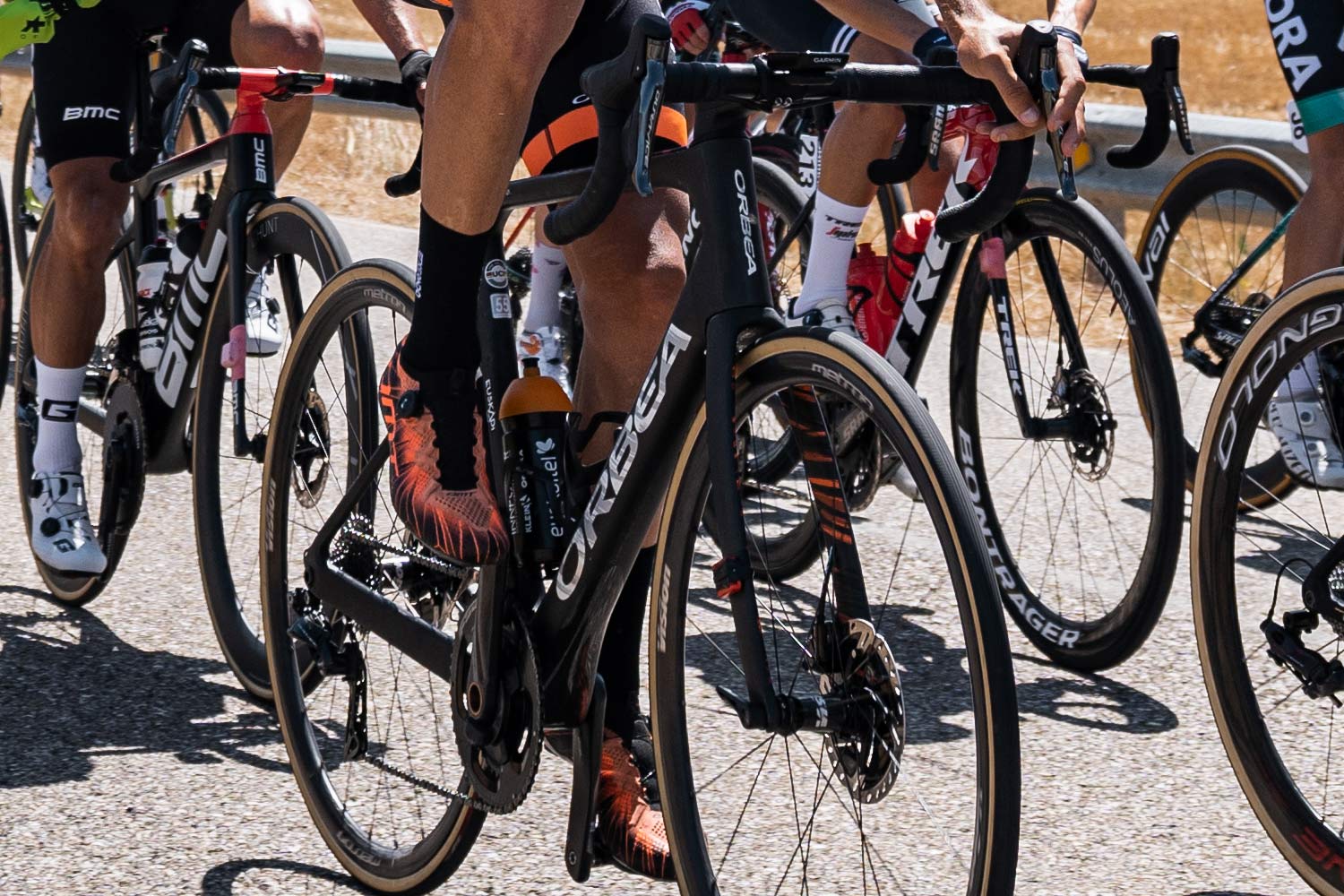 Orbea first debuted their dedicated Orca Aero back in 2017 as a rim brake-only aero road bike, following it up with a disc brake version the next year. Since that time, the standard Orca has continued to evolve, even getting much more aerodynamic to the point that the Euskadi pros seemed to be exclusively racing the all-rounder, but the actual Orca Aero remained unchanged.

Now it seems a new Orbea Orca Aero is coming soon, and it looks like a complete aero road bike redesign.

What do we know? Tech details 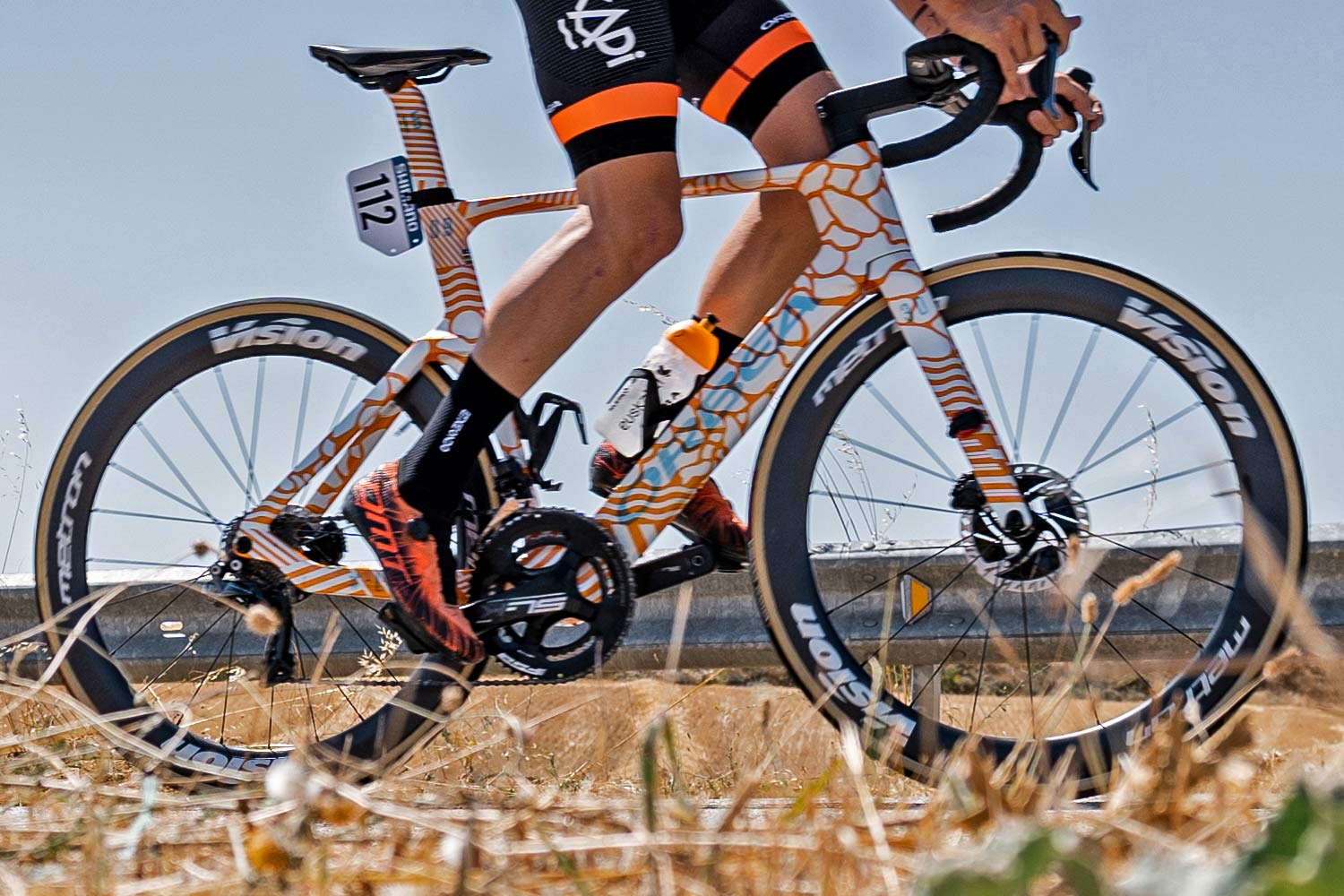 First off, we’re going to assume that this is a new Orbea Orca Aero as the deep tubes shapes and wheel cutouts suggest, and it also looks to take several cues from last year’s updated Ordu TT bike. But curiously, even though these bikes are being raced now (and have UCI stickers), no new Orbea has received UCI approval since last summer according to the official list of approved frames dated just over a week ago. 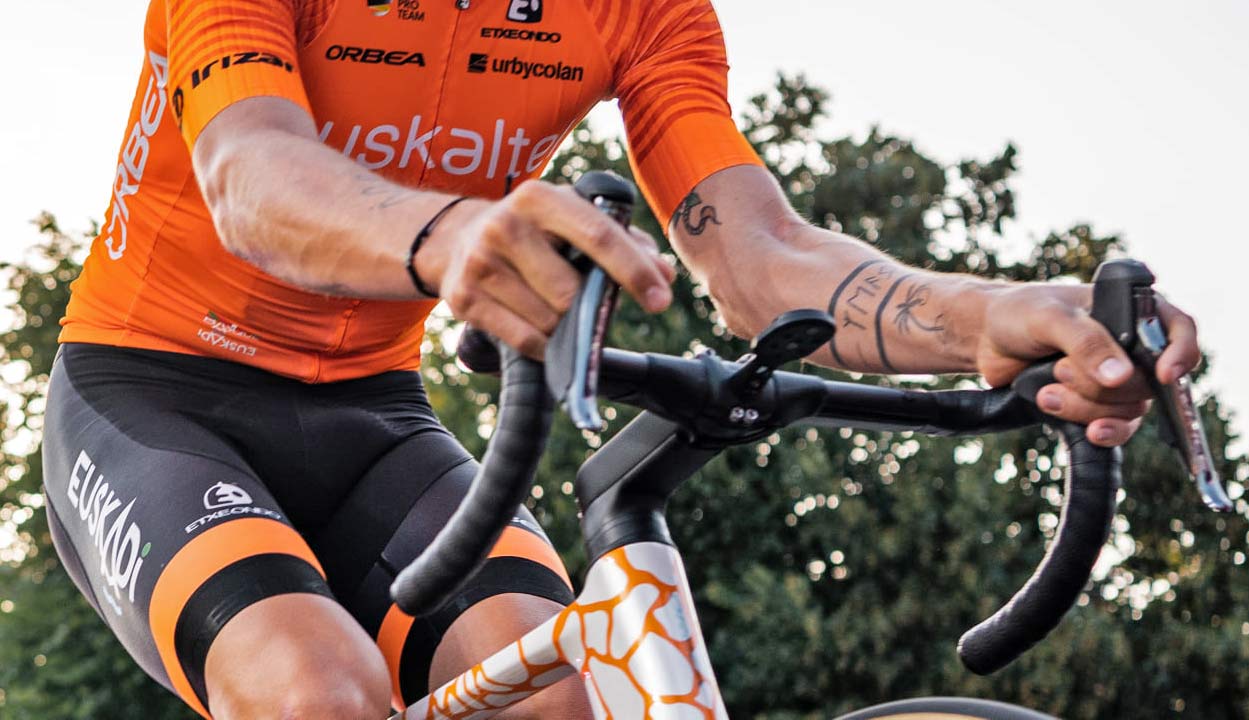 What we can definitively see is an all-new front end of the bike that seems wider at the straight 1.5″ internal headtube now that all cables are routed completely internally. There’s also a rethinking of the aero fork leg design, now moving straight down from the crown close to the rim, before an S-bend to clear space around the spokes down to the hub. That’s a major departure from Orbea’s previous bow-legged, low air pressure “Freeflow Fork” designs of previous aero road bikes. 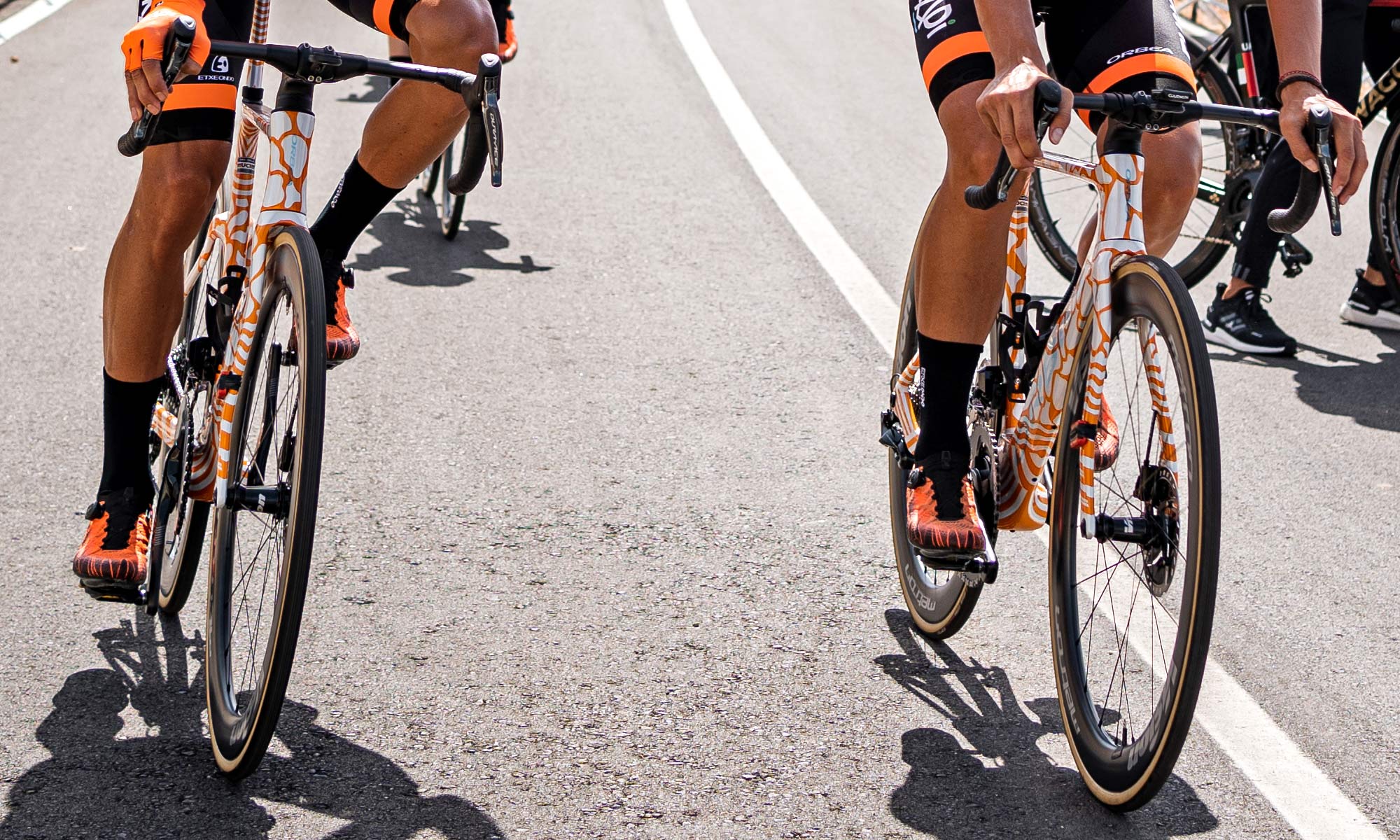 Moving to the downtube we see more drastic reshaping. The upper part of the downtube moves close up to the front wheel with a cutout to clear the tire and a smooth transition from the fork crown, then appearing to get a tapered aerofoil shape above the first bottle. The lower half features a more pointed aero profile into the wind, staying wide with a chopped-off rear to shelter or smooth airflow over the rider’s water bottles. 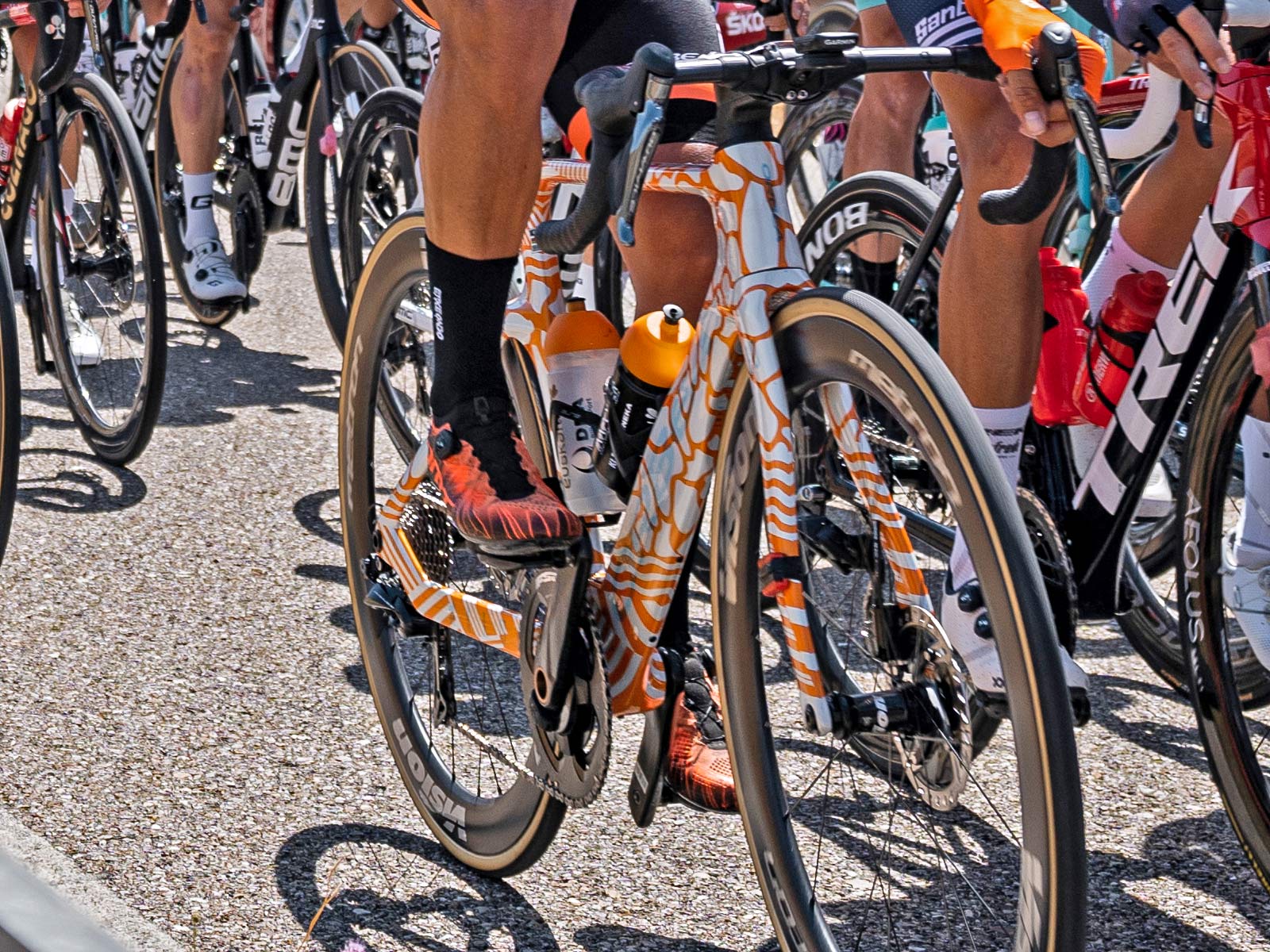 The rear end is also completely reshaped, with a completely horizontal set of chainstays coming off the bottom bracket, tapering up just in front of the rear dropouts. The disc brake-only bike drops its seatstays a bit more than before, with a horizontal top connection back to a thinner seattube with a rear wheel cutout.

Of note, there are blue text labels on these camouflaged bikes, which we’ve been led to believe suggest certain technical features of the new bike. That 30 on the fork could mean 30mm tire clearance, the 15 on the seatpost a 15mm head offset

The bulk of the team Euskaltel-Euskadi team is still riding the current Orca, but at least three riders appear to be on this new Orca Aero, including #112 Xabier Mikel Azparren who was in an early break. That suggests that the new bike might not be entirely ready, or the more all-rounder bike could just be a better option for mixed stage racing. We’ve asked Orbea for an official timeline on the new bike project, and will update when we get more details.