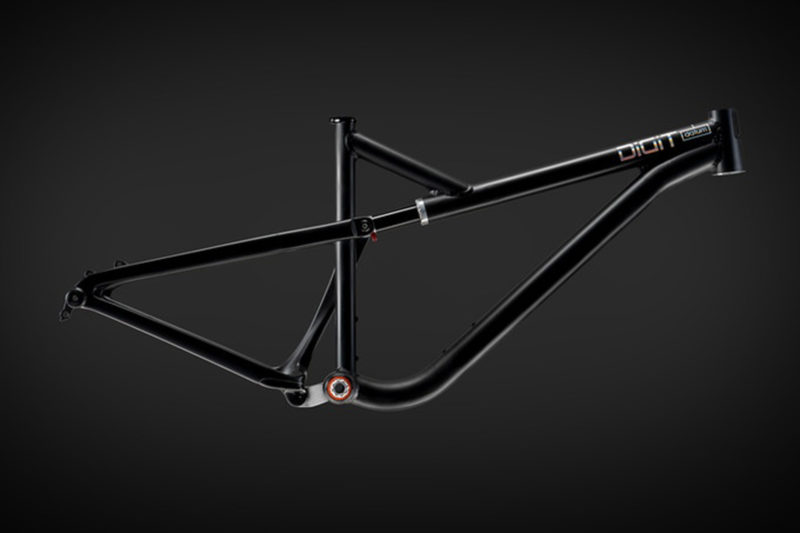 The Digit Datum is a 140mm travel full suspension mountain bike, the first to run Analog Suspension’s Integer Strut Shock. Digit Bikes have taken frame and suspension integration further than any manufacturer yet, sliding a 12″ long shock absorber into the top tube of the Datum frame. What’s more, the rear triangle drives the shock’s shaft directly, with the lower link pivoting concentric to the bottom bracket. Let’s dig down to find out exactly what your $2,750 USD gets you. 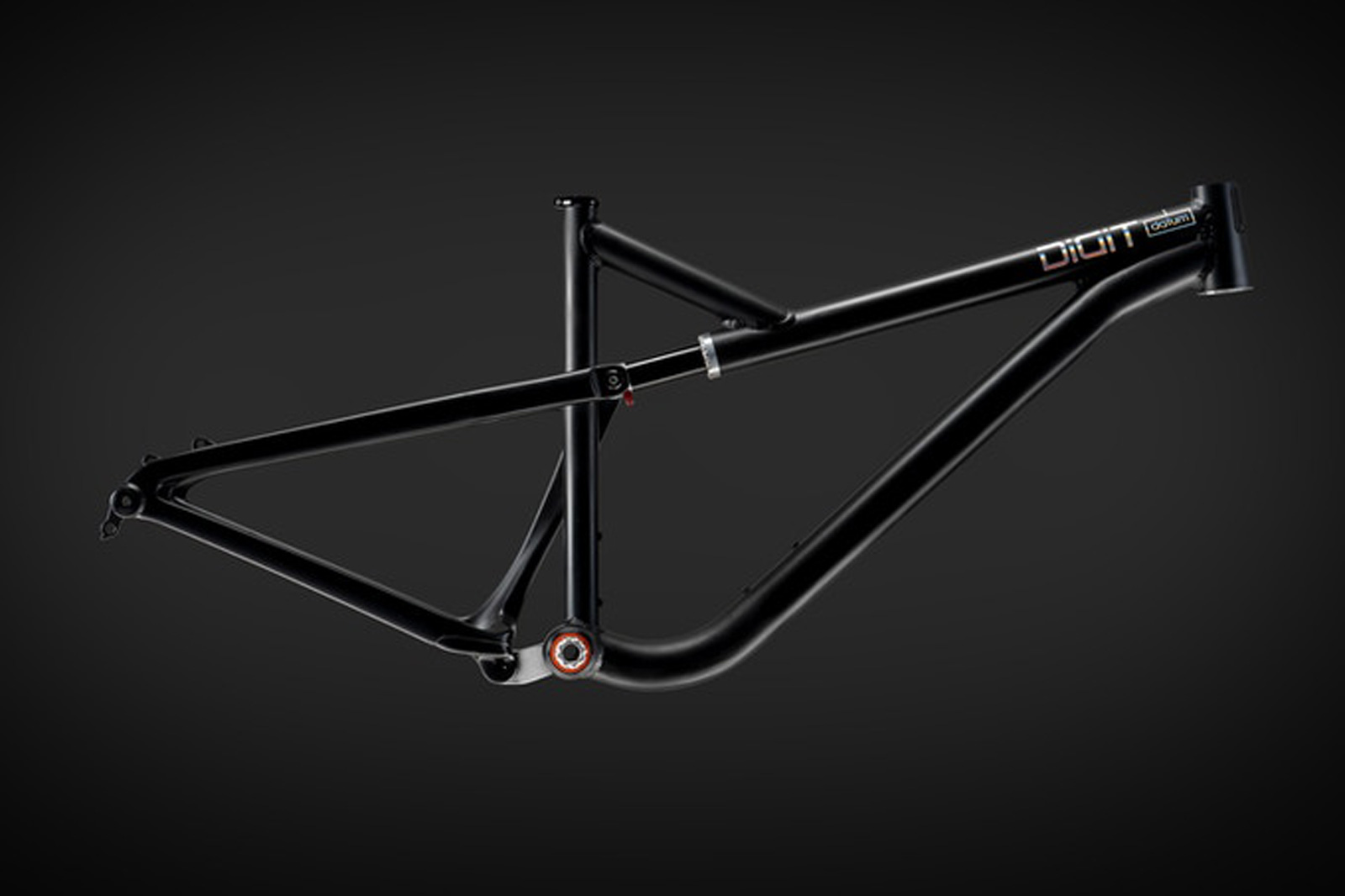 The Digit Datum, if successfully funded via their Kickstarter Campaign, will be available in sizes S-XL, catering to rider heights of 155cm to 195cm. It features a thoroughly modern trail bike geometry, with 140mm of rear wheel travel paired with a recommended 150mm or 160mm travel fork. It’s also a mullet, pairing a 27.5″ wheel out back with a 29″ wheel up front.

The Datum gets reasonably generous reach figures for a bike that sits firmly in the trail category, at 480mm in large. That’s combined with 435mm chainstays (consistent across the frame sizes), a 65° head tube angle, 75° seat tube angle, and a bottom bracket height of 344mm. 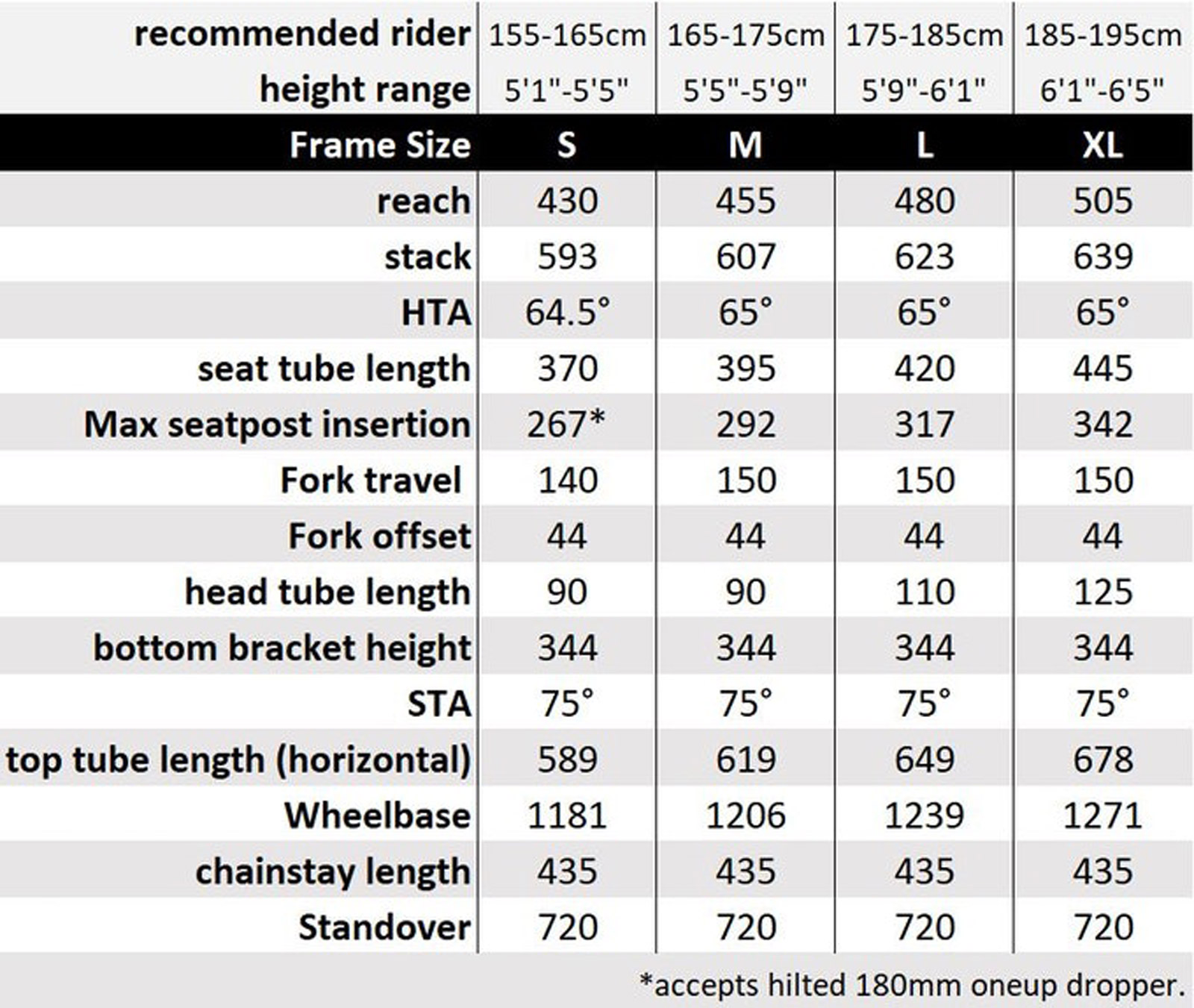 To be fair, there’s nothing especially interesting going on with the geometry. The highlight feature of the Digit Datum is that top-tube integrated shock; the Analog Suspension Integer Strut. Before we get into the tech, can we take a moment to appreciate that the suspension layout allows you to fit not just one but two water bottles inside the front triangle, even on the smaller frame sizes! 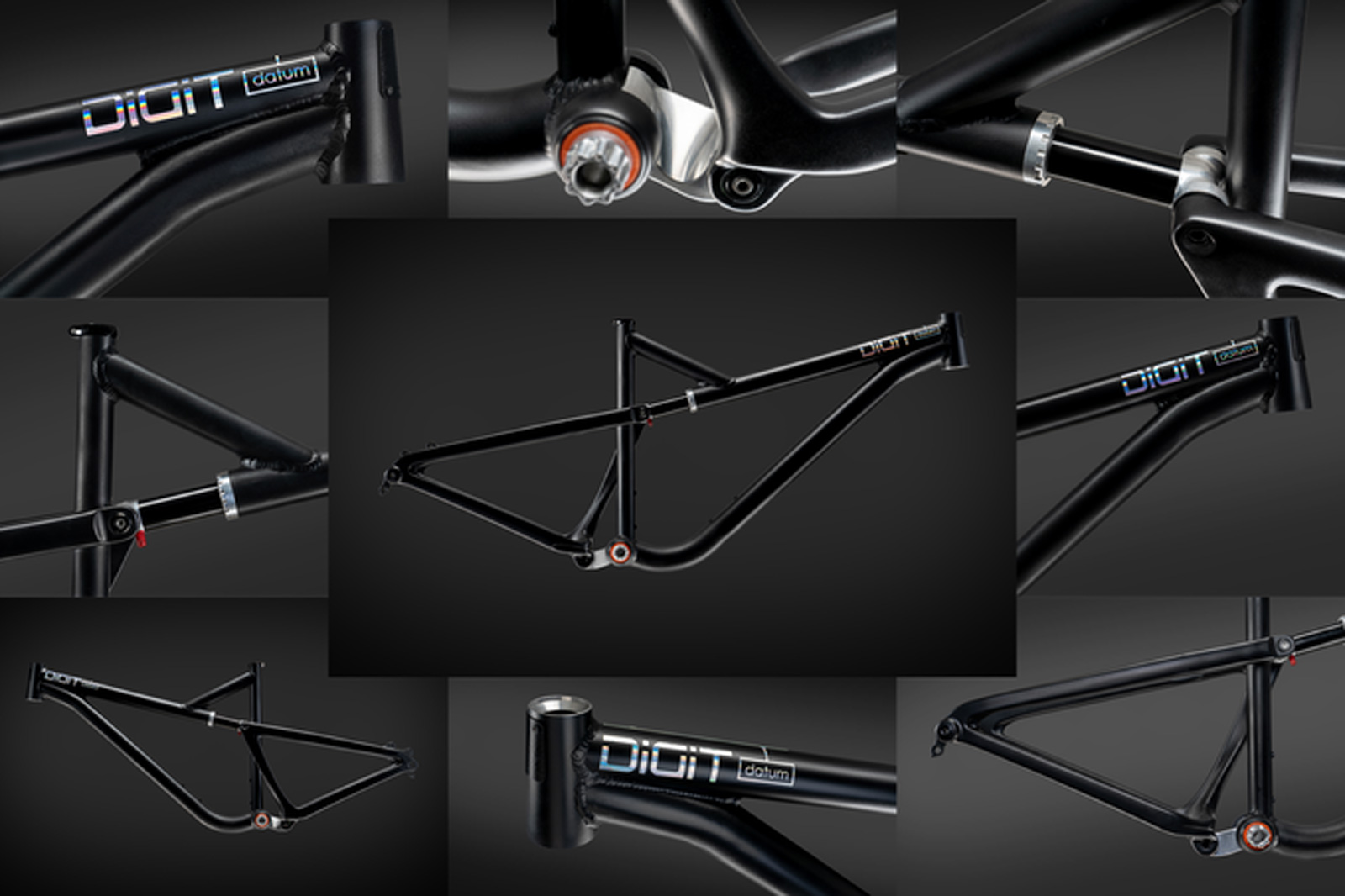 In founder Tim Lane’s own words, because the slider is an analog to the upper link of traditional four-bar linkage suspension systems. “Analog suspension was conceived from the realization that on most 4-bar suspension systems the upper link undergoes large angular displacement, which can cause the linkage’s instant center (sometimes called the virtual pivot point) to move wildly, and for the leverage rate to get all funky. This can cause the suspension’s behavior to change unpredictably throughout its travel, which in turn results in a loss of control for the rider”.

Digit go on to say, “The slider in the Analog system does away with the short upper link parts, yet functions like an infinitely long link. Doing so removes that angular displacement problem altogether, this helps keep migration of the Instant Center under control throughout the travel. The suspension performance is thus controlled throughout its travel resulting in a predictable, surefooted ride”.

As there is no pivoting mount on the front of the shock, the rear end has to drive the shock’s shaft perfectly linearly, or else it would suffer from binding issues, and the shock itself would last all of about 5 minutes.

Tim is confident in the design of the Datum, however, stating that the structure is very stiff, because it uses well-spaced, well-supported bushings to control the linear path of the rear triangle’s upper pivot. He goes on to attribute the stiffness to the rigid, triangulated structures for the front and rear frames, a single stiff link and the sturdy 15mm and 30mm pivot axes.

Well, we can definitely appreciate the potential here for a significantly lighter bike. With the lack of bearings, axles, and the rest of the hardware that goes along with multiple frame pivots, there’s potential for some serious weight savings. Digit claim this could be anywhere in the region of 200g to 600g.

Then, there’s durability and serviceability to consider; again, the reduced number of pivots mean fewer replaceable parts that are liable to wear and tear. But, these benefits are true of basic single-pivot suspension designs, too, which instead run traditional shocks, parts for which are readily available. A quick huck-to-flat, before we go on… shame the rider’s leg was in the way, mind.

Here’s a list of some of the other claimed benefits of Analog Suspension:

With the shock seamlessly integrated into the top-tube, the Digit Datum is rather aesthetically pleasing; there aren’t many full suspension bikes with lines that clean, and with so much room inside the front triangle. Beyond aesthetics, there surely there has to be a tangible performance benefit, right?

Here’s where it gets complex. 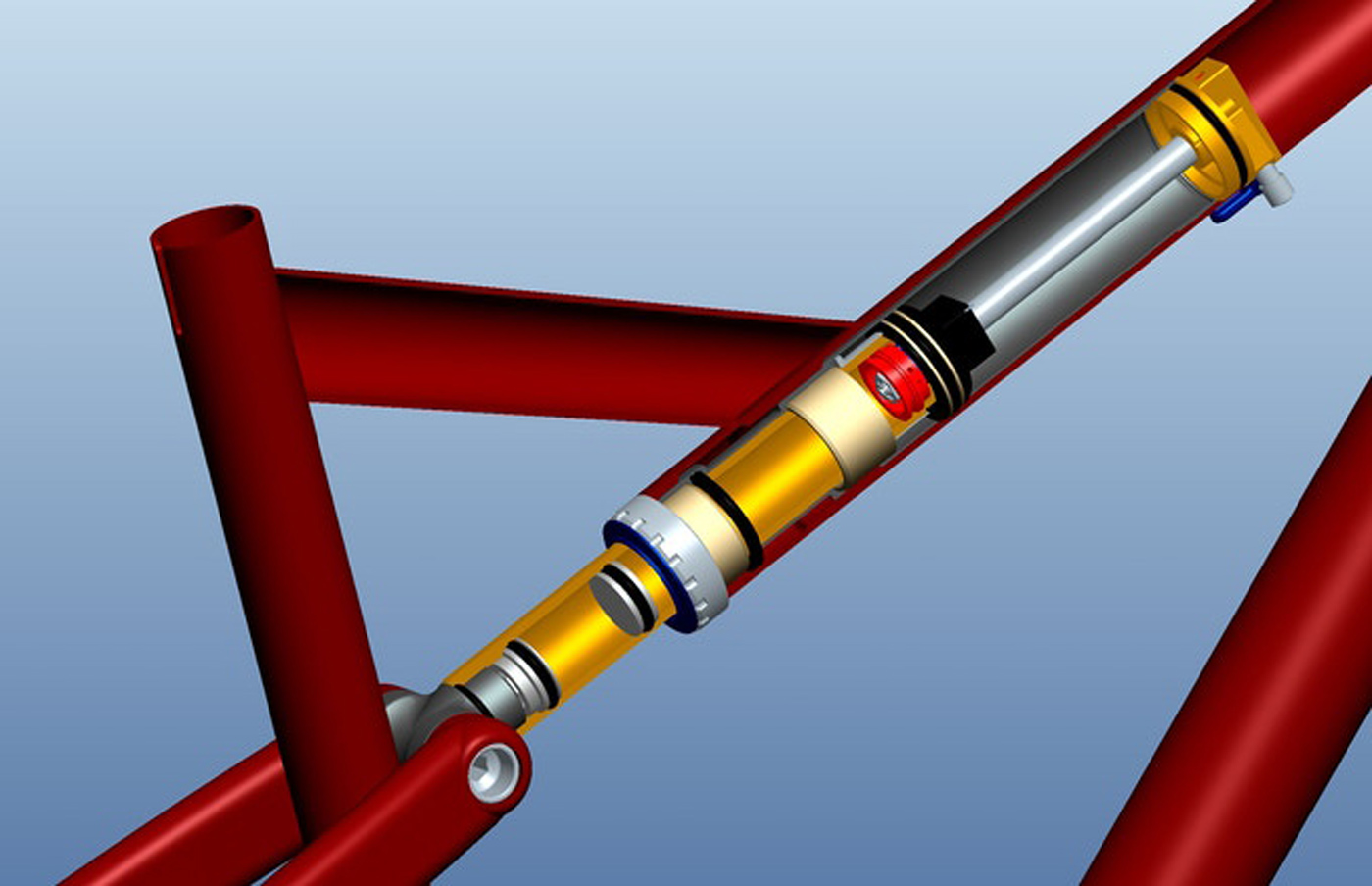 The Integer Strut is said to be fully serviceable, without the need for specialist tools

The architecture of traditional shocks is limited by the length permitted by the suspension layout; that’s true for all common suspension platforms you see on mainstream bikes, whether it be four-bar, Horst-Link, single-pivot, DW-Link, etc. That space is the distance between each eyelet, the points at which the shock connect to the suspension rocker/link and the front triangle. Analog’s Integer Strut design, wherein the shock absorber slides directly into the top tube, gets around this space limitation.

So what? It means that the shock itself can be super long. In the case of the Digit Datum, the shock is over 12″ long. For reference, the shock on my 165mm travel Revel Rail is just over 9″ long. Again, so what? Analog fill that additional space with a longer air spring, tuned to match to the frame’s leverage profile. It also enables them to use more oil in the damper to resist overheating and allow higher flow rates through the damper piston. This is said to amount to improved control over longer periods of use.

“Much of the technology which makes the most highly regarded off-the-shelf shock absorbers ‘special’ is intended to compensate for deficiencies resulting from having to squeeze performance out of the small space between the frame’s shock-eyelets, and to make them adaptable for use on all different bike models. The Integer Strut isn’t disadvantaged in these ways because there is no upper eyelet to limit its length, and because it’s a bespoke match for the Analog suspension mechanism” – Digit Bikes.