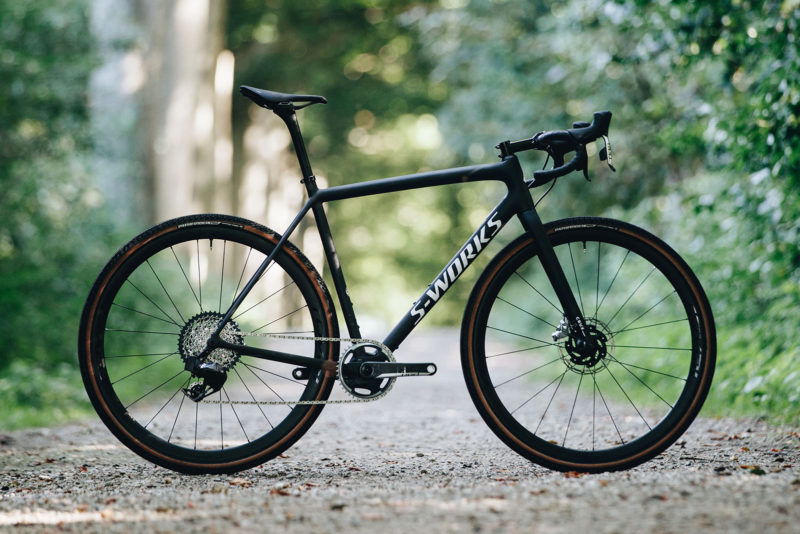 Like so many brands these days, the new Specialized Crux has made the shift from cyclocross to gravel. But it’s the execution here that sets it apart, using their ultralight layup and design concept from the Aethos to create a bare bones, spare no expense gravel race bike that weighs next to nothing.

With frame weights as low as 725g, they say it’s the lightest gravel bike frame in the world, and with the S-Works build, it’s gunning for the Lightest Gravel Bike in the World title, too.

But giving up weight didn’t give up its goal of crossing the finish line first, so they tweaked the design, geometry, and features for the express purpose of making it not just the lightest, but also the fastest. Here’s how they did it…

How they made a 725g Crux frame 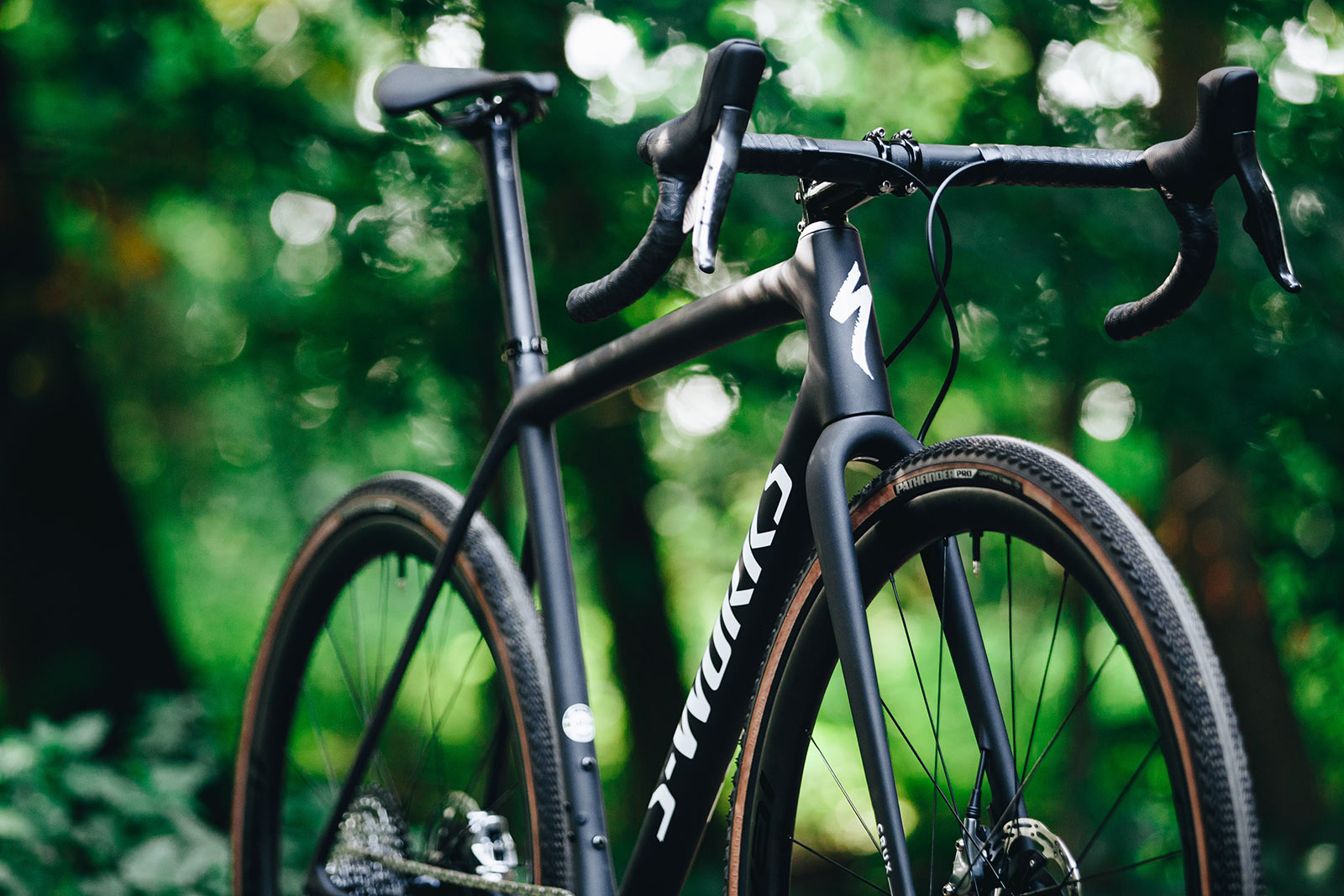 The S-Works Crux gets a shimmery, barely-there paint to save weight.

Like the Specialized Aethos, there are two versions of the Crux, an ultralight 725g S-Works version with FACT 12R carbon, and the 825g Pro version that’s 100g heavier and will eventually come in Expert and Comp builds, too.

The weight savings come from employing the same minimalist approach used to create hte 525g Aethos S-Works frame. Straight tubes with as few curves at the joints as possible plus minimal overlap of carbon fiber sheets saves a lot of weight. It also lets them use longer sheets and more continuous fibers running throughout the frame, which maintains the necessary strength and durability. 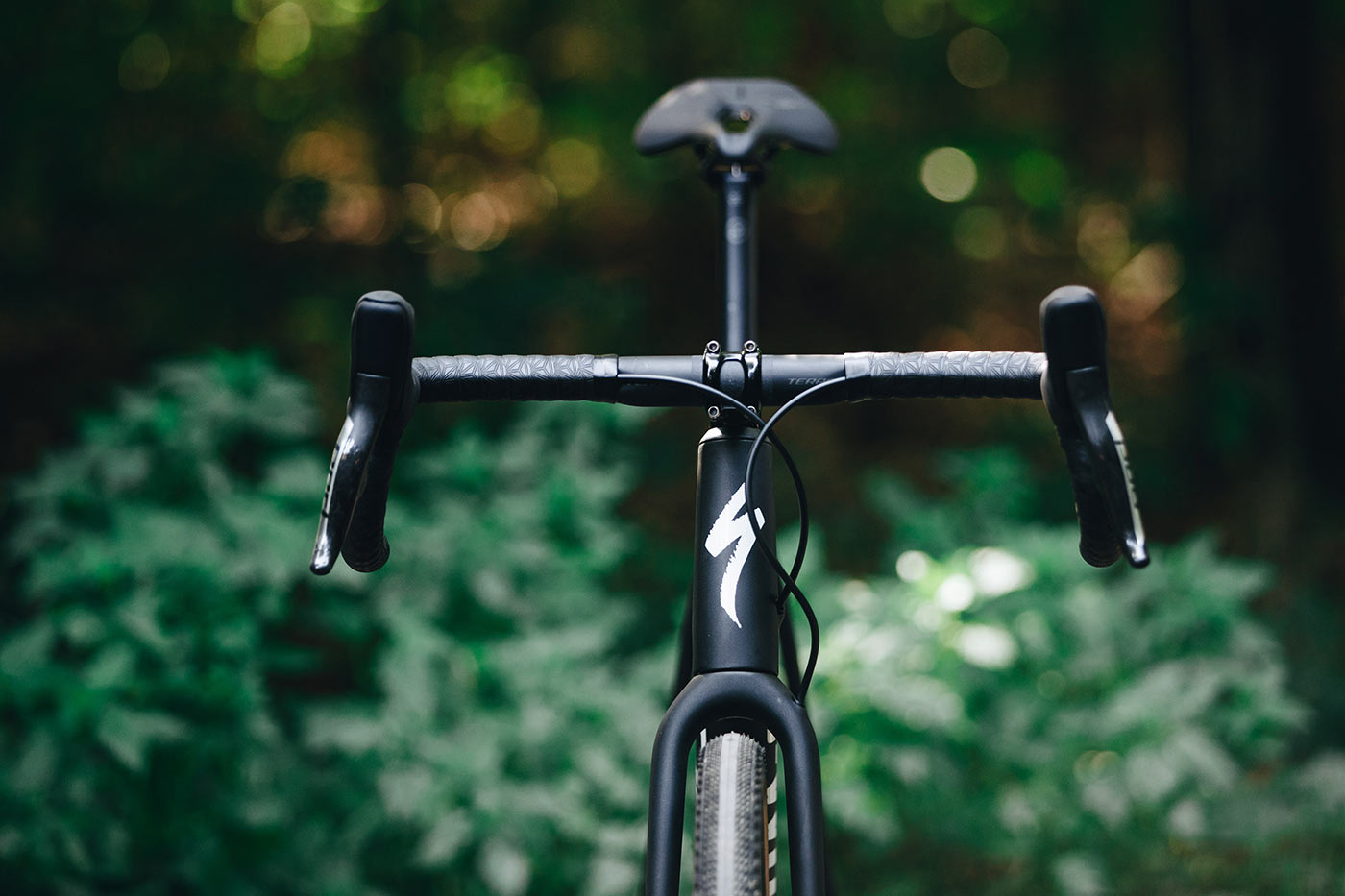 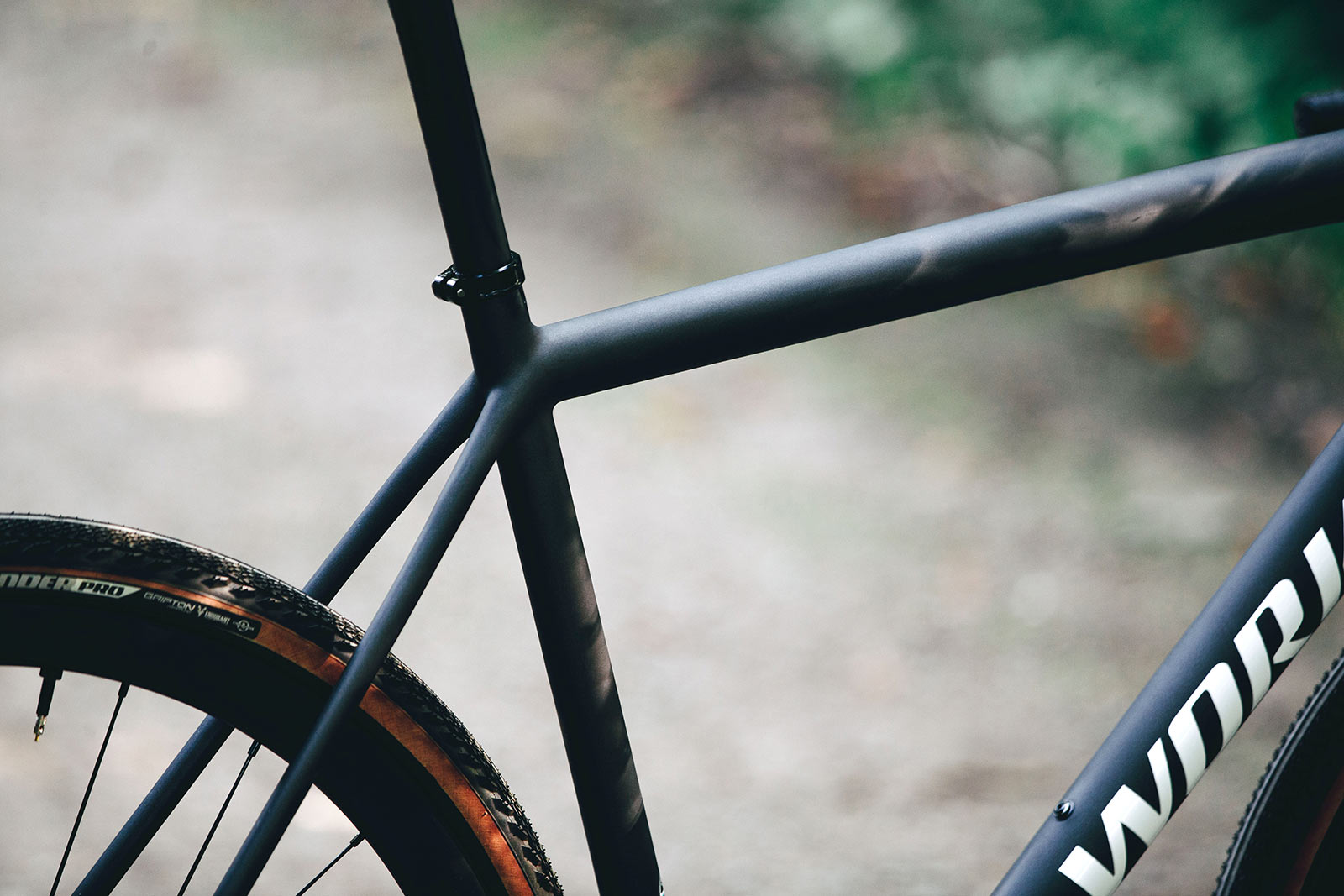 They say the layup alone saves 150g, and then the tube shapes do even more. Check out our Aethos coverage for a deeper dive on how and why this construction method works.

For the Crux, they definitely needed to beef it up a bit, but it’s still a featherweight. All models use the same FACT 12R carbon fork, which comes in at 400g cut for a size 56cm frame. 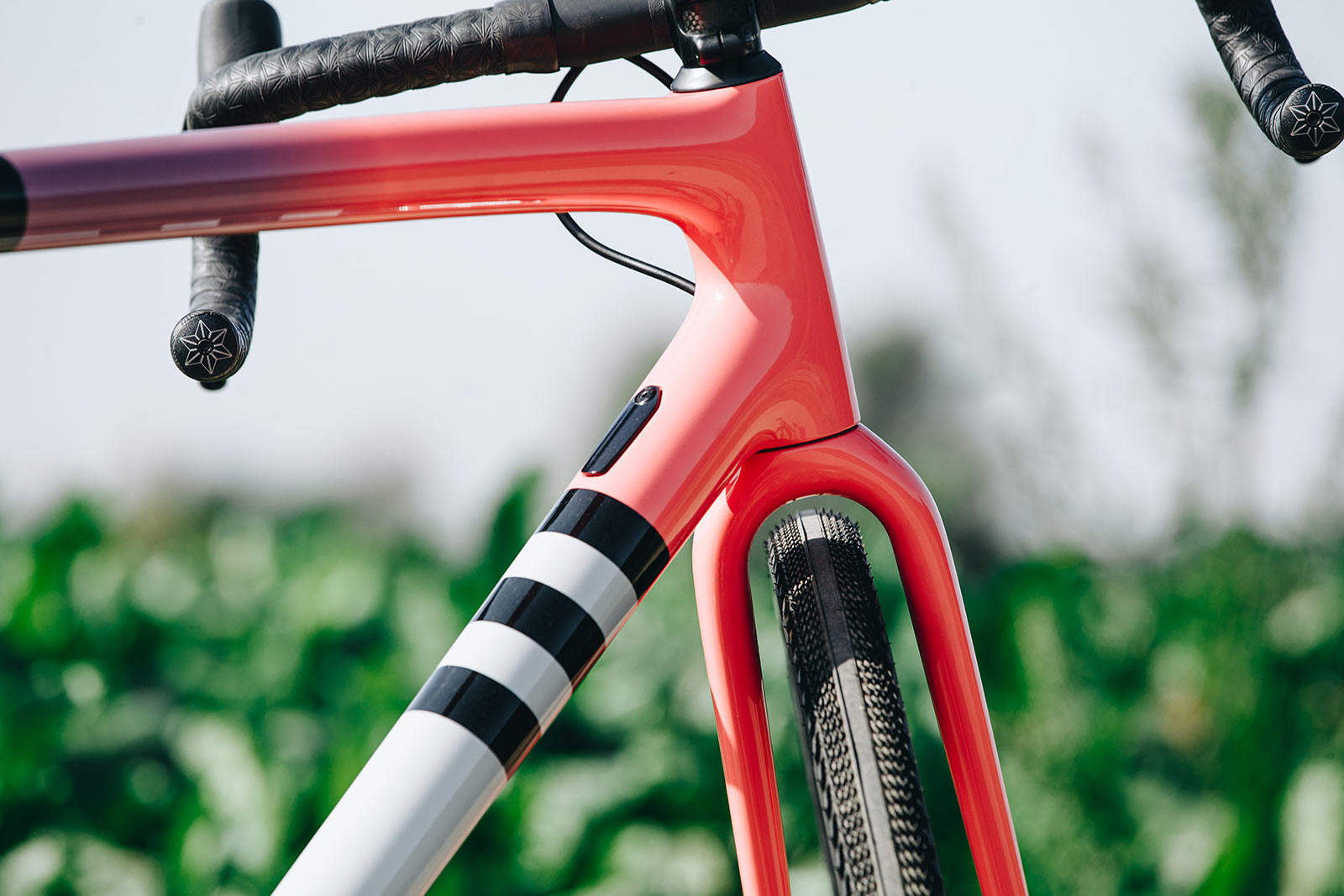 While we could guess why the Crux is heavier than the Aethos, we wanted Specialized’s take on it. Crux product manager Stewart Thompson told us  there are “two reasons the Crux frame gains weight over the Aethos. Mainly, the stresses of off-road riding are subsequent strength and durability testing requirements are much higher.” 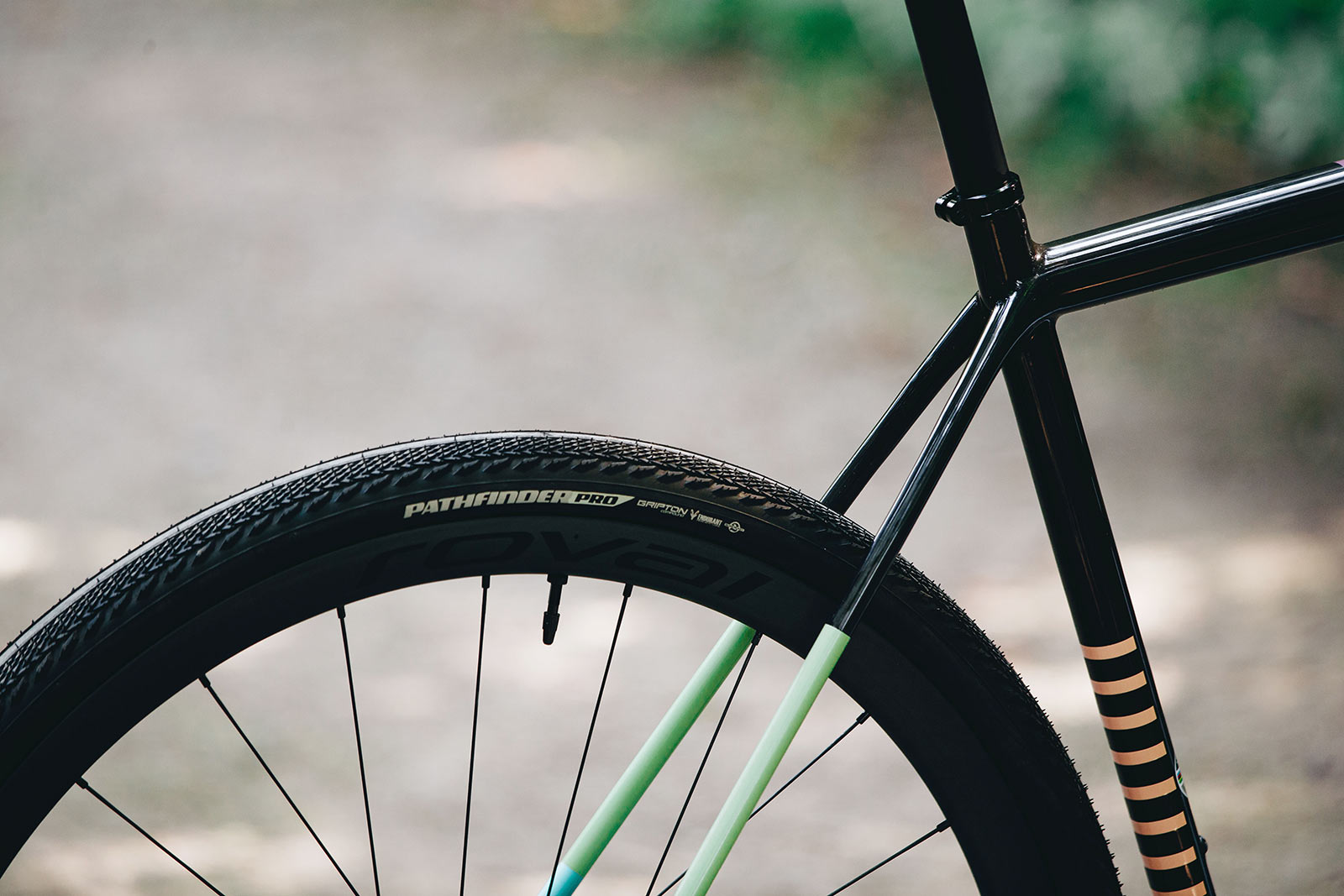 “With 47c tire clearance, this bike has so much capability and we made sure that the frame was strong and durable enough to handle anything you could throw at it. The layup is reinforced across the board but particularly in the seat tube and head tube regions. Additionally, the frame has more surface area and is larger overall to accommodate things like the tire clearance, which adds some weight.”

There’s more to it than less carbon

A lightweight frame is worthless if it doesn’t ride well and fit all the current standards. The new Crux clears 700×47 tires (or 650B x 2.1″) without using dropped chainstays or other curvy designs. In fact, they’re using the same straight, hollow chainstay design as the Aethos, and it’ll still clear big tires and a 2x drivetrain with front derailleur.

They’re (jokingly) introducing a new standard to hype this: Clearance to Weight Ratio (CTR), and here’s how they say the competition stacks up: 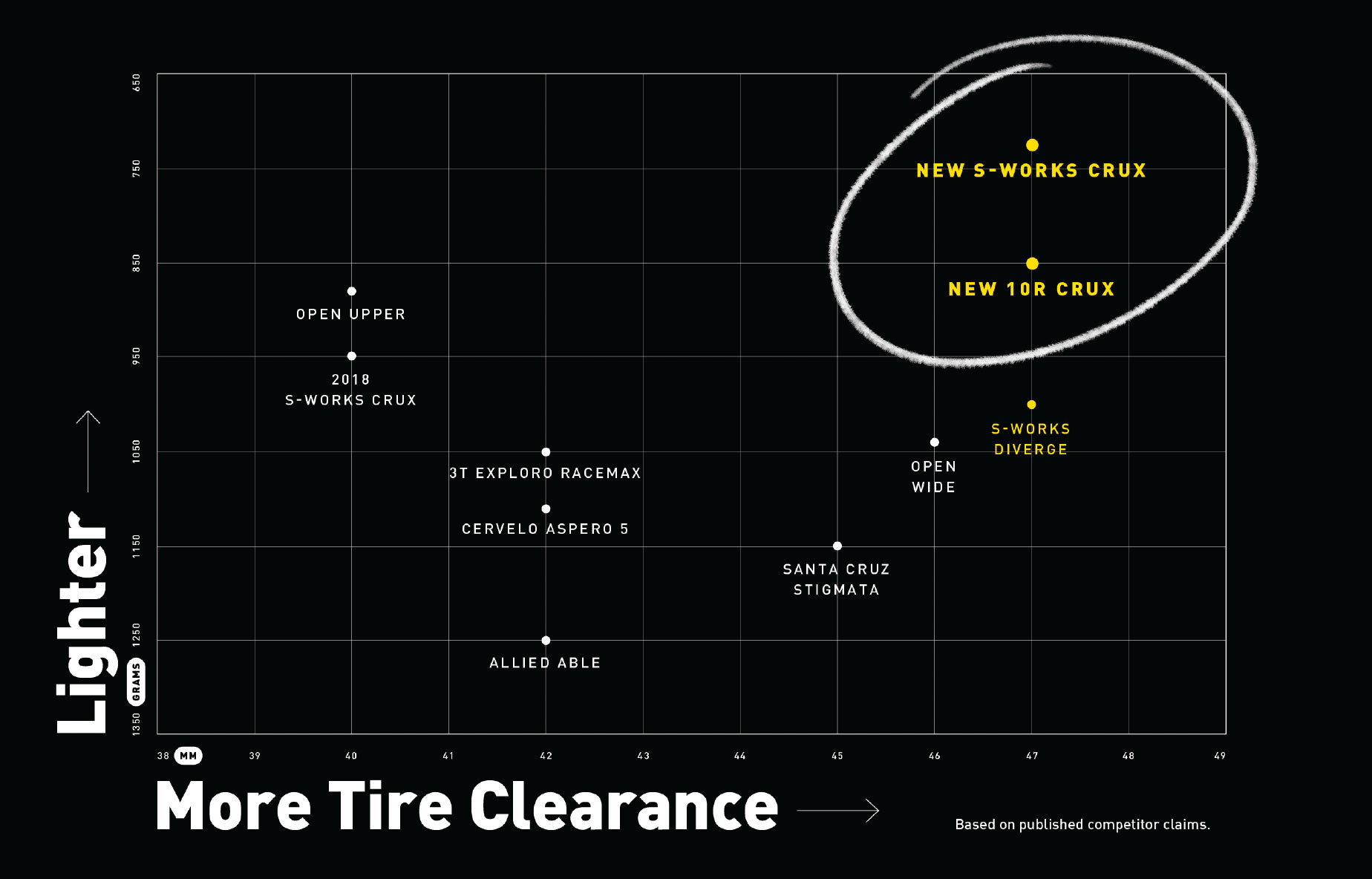 In addition to large tires, the frame’s minimal plies, thin seatstays, and intentional layup combine with a 27.2mm Roval carbon seatpost that adds a bit of flex to enhance rider comfort. It’s dropper post compatible if you want to run one. 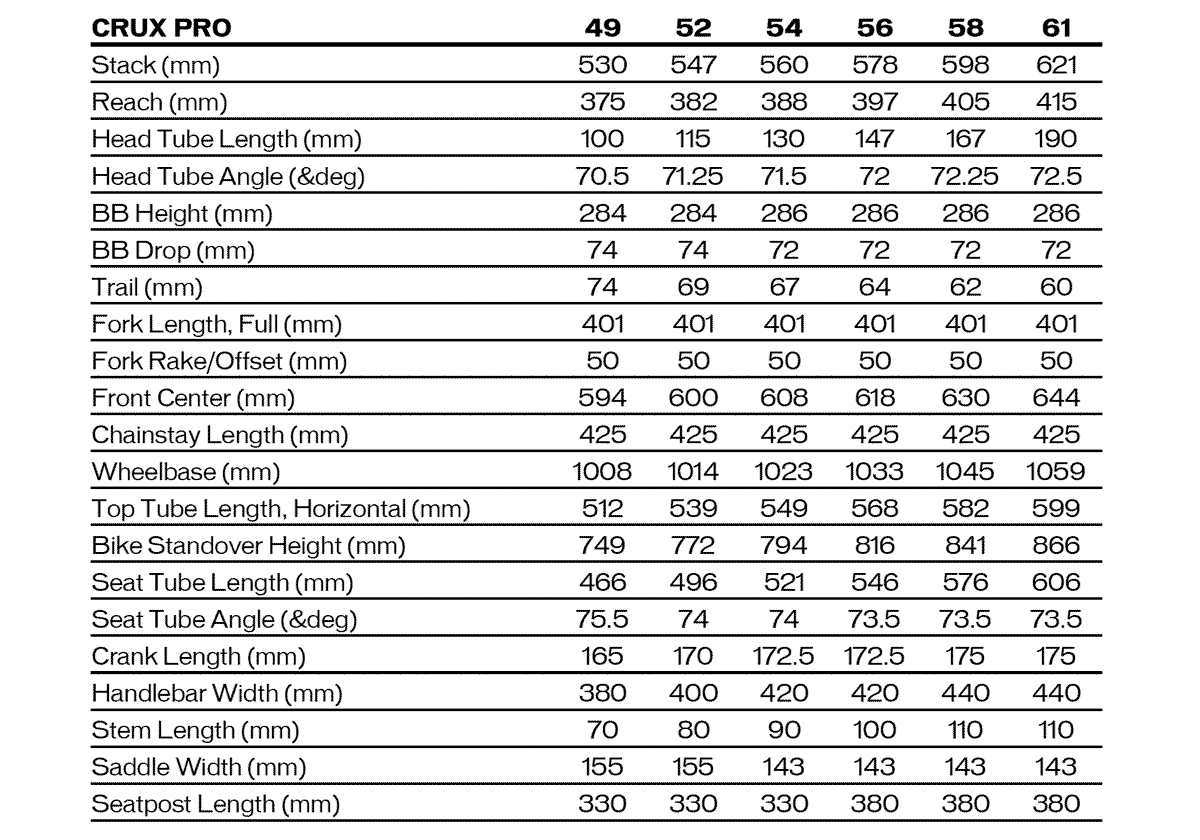 The geometry is race oriented, with a 10mm longer reach and low stack. Combined with a 72mm bottom bracket drop (3mm lower than prior Crux), it puts you in a comparatively low, racy riding position, but not so low that you can’t ride long hundred-miler events on it. The design also pushes the front wheel out of the way of your toes to eliminate clearance issues.

A shorter stem and low stack helps keep enough weight over the front for adequate steering traction. All of it creates a bike that borrows a bit from mountain bikes to create high speed stability and center the rider weight regardless of whether you’re going up or down, or just hammering along the flats.

And since this has to also serve as their cyclocross race bike, it maintains just enough low speed snappiness and cornering ability to wiggle between course tape chicanes, too.

So what did they give up? 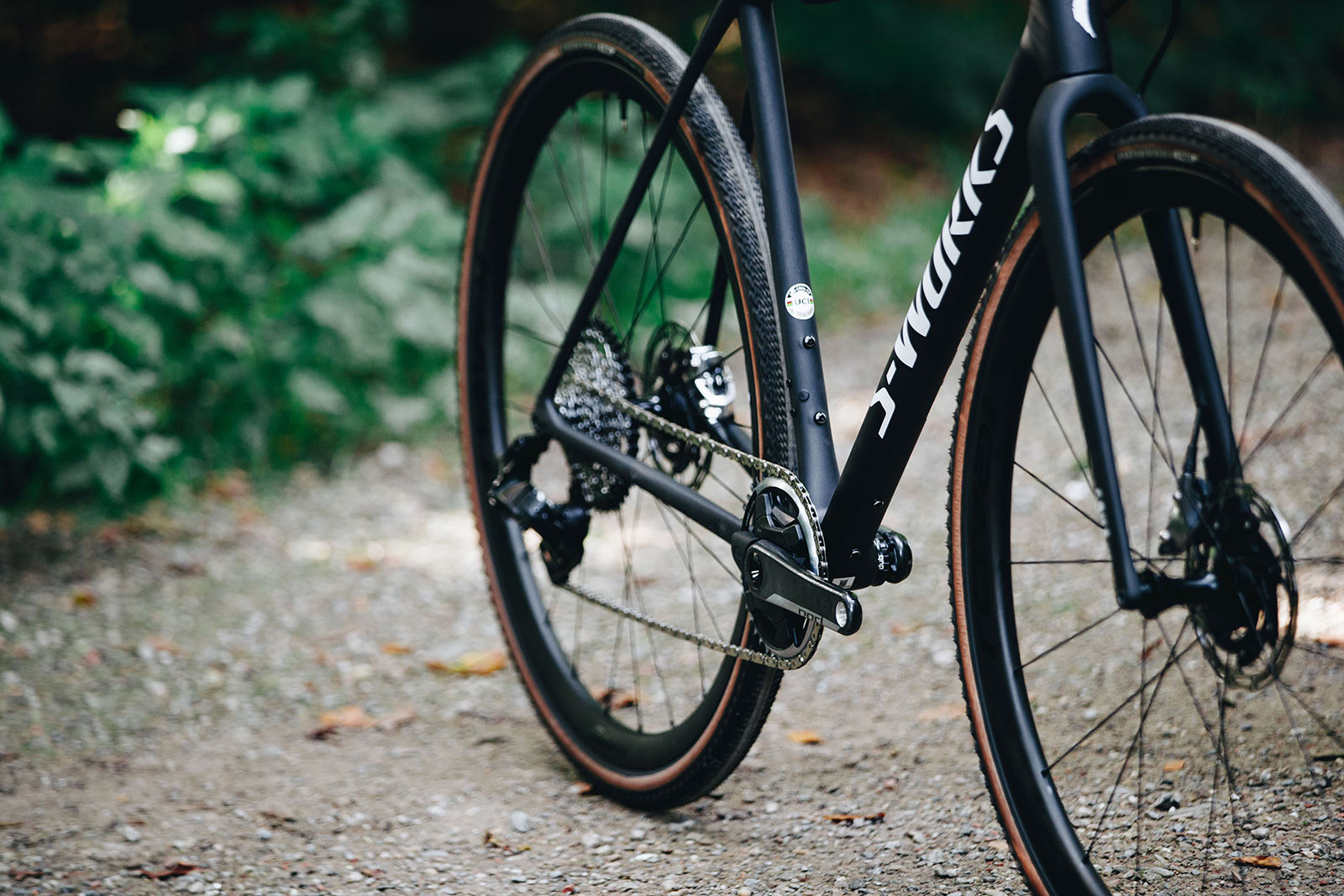 It does have three bottle cage mounts, albeit one’s under the downtube, just in front of the bottom bracket.

It uses the same minimalist dropouts and recessed thru axle bolts as the Aethos, and keeps a simple threaded bottom bracket. Despite the weight and appearance, it passes all the same safety and strength tests as the Diverge, though, so you won’t need to be gentle with it. 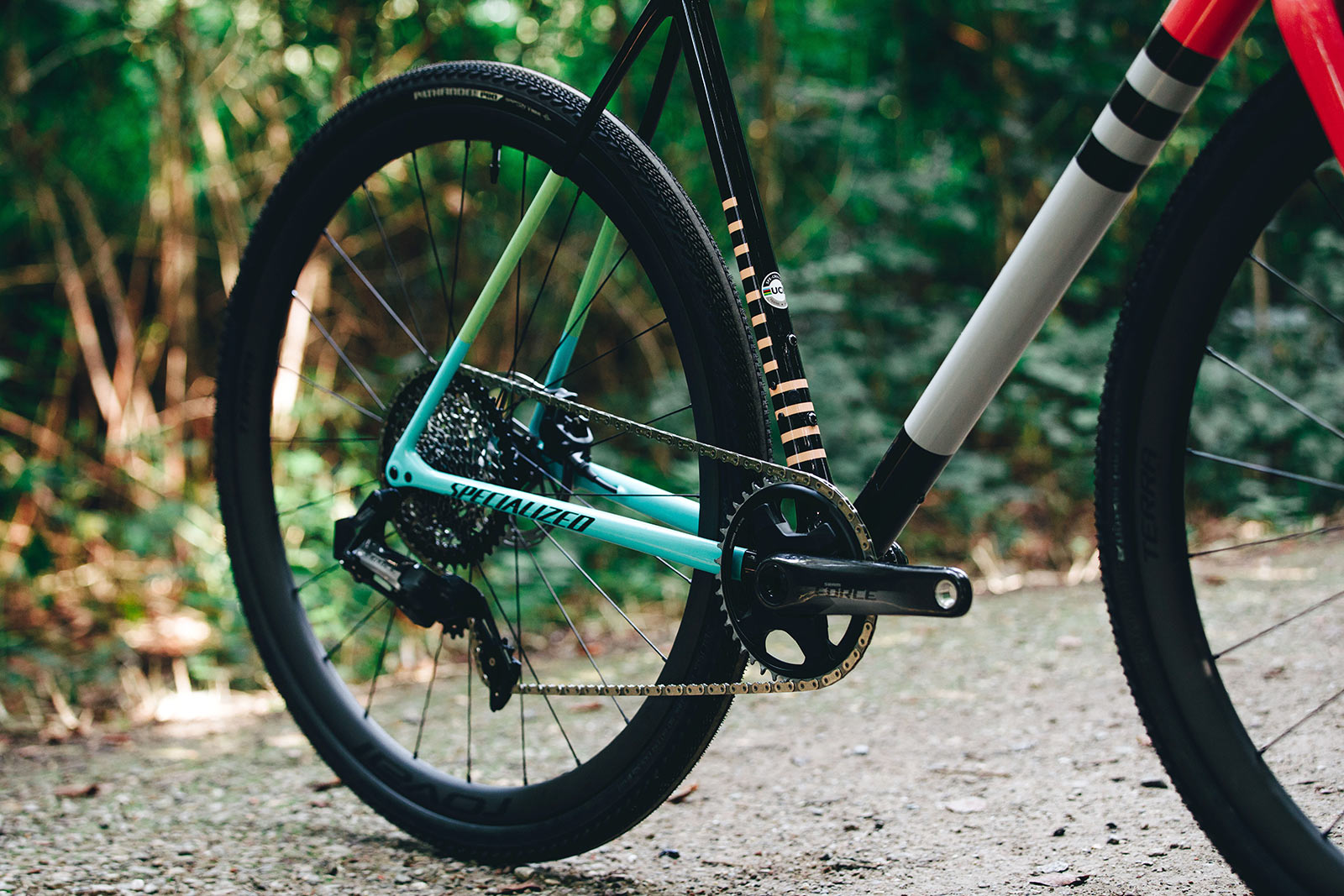 The Crux Pro gets a fancier paint job.

As for drivetrains, it’s 1x and 2x compatible, with the only caveat being that it will only work with electronic 2x groups (AXS, Di2, EPS), and you may not be able to run all gearing combinations. Specifically, Thompson told us that max chainring size depends a bit on the specific crank.

With SRAM 1x, max is 46t. SRAM 2x eTap can use all double chainring configs. Shimano GRX, all cranks and ring sizes are compatible. Shimano 2x road is not compatible, Shimano road cranks with 1x can go up to 42t ring.

The front derailleur mount bolts on, so if you are running 1x, you’ll have a clean appearance by just putting the bolts in there instead. 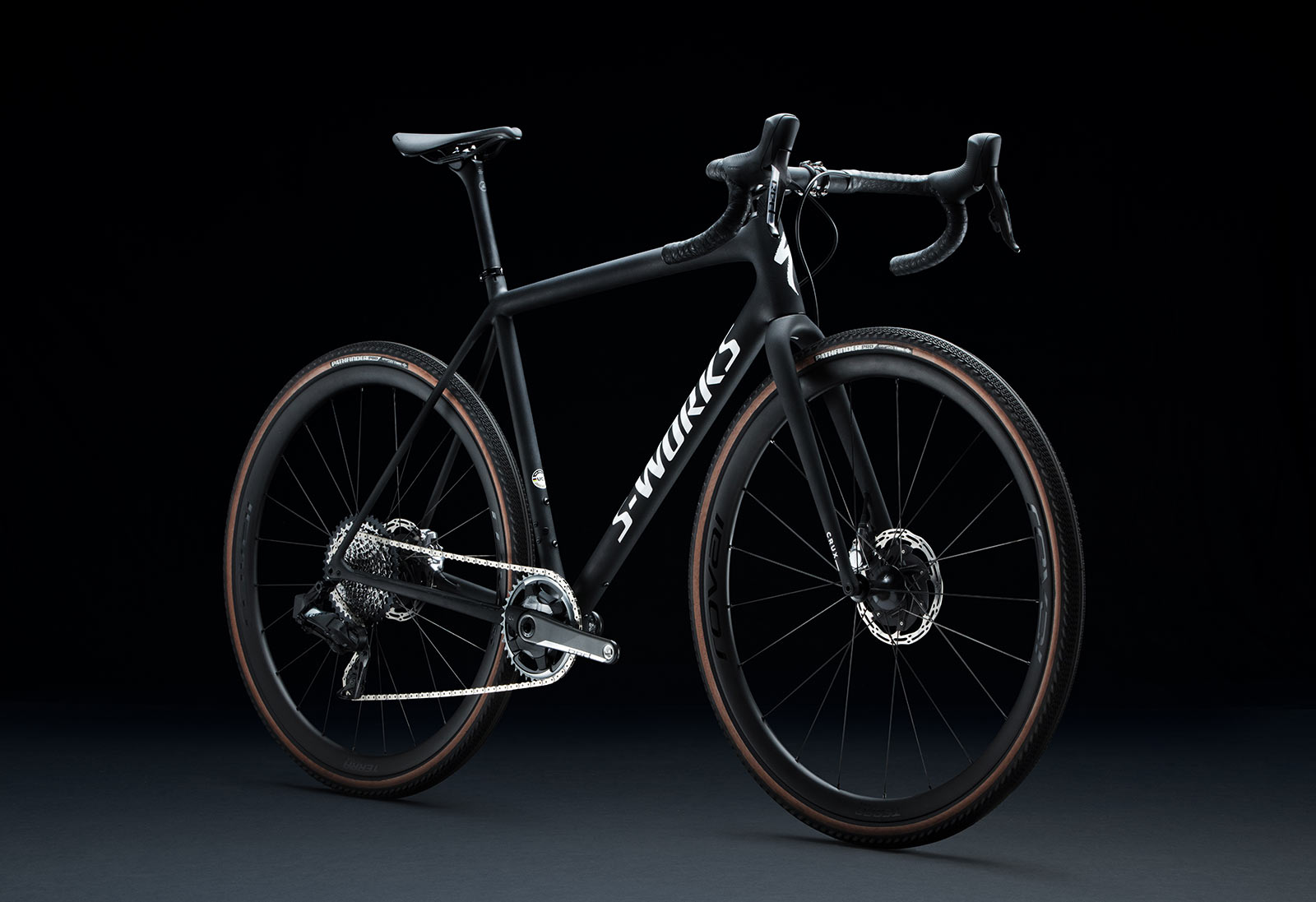 Remaining spec includes an S-Works Power Saddle with carbon rails, SRAM Red eTap AXS drivetrain and brakes with XPLR 10-44 cassette, 40-tooth chainring, and powermeter crankset. MSRP is $12,000 (£10,750 / €12,200) and you get one choice of color: This lightweight Satin Carbon/Spectraflair/Gloss Abalone. 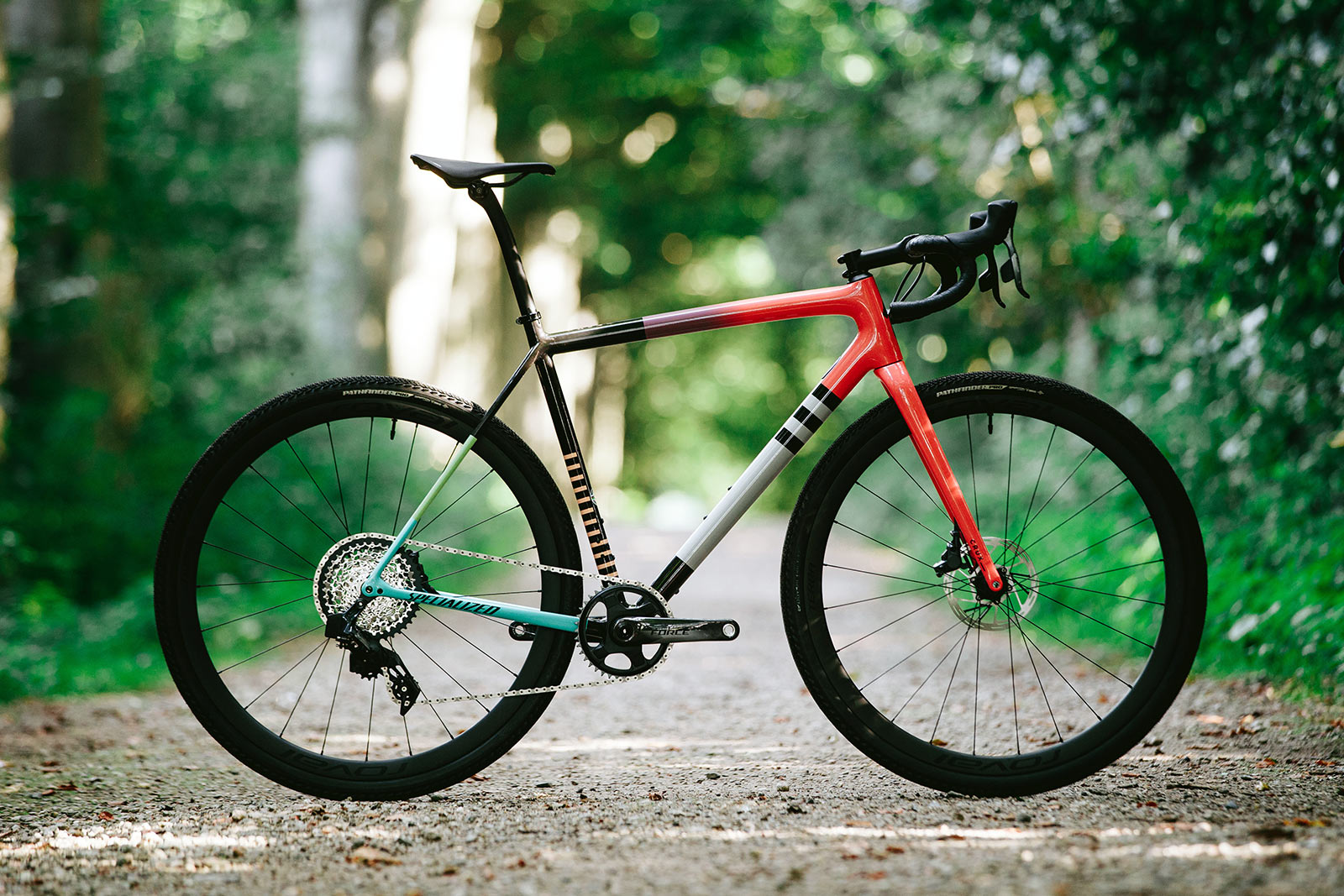 Claimed weights for these models, which all use the same FACT 10R frame, are:

An S-Works frameset ($5,000 / £4,000 / €4,500 ) will also be available in three colorways and includes the Roval Alpinist seatpost and seat binder with titanium bolt. Or go for the standard FACT 10r frameset ($3,200 / £N/A / €3,000 ) which leaves off the seatpost and gets a standard binder bolt. Both framesets include the same S-Works level fork and thru axles with all frame hardware.

Stay tuned for our full review, but here’s a little teaser, plus video walk through of the new Crux frame and first impressions…