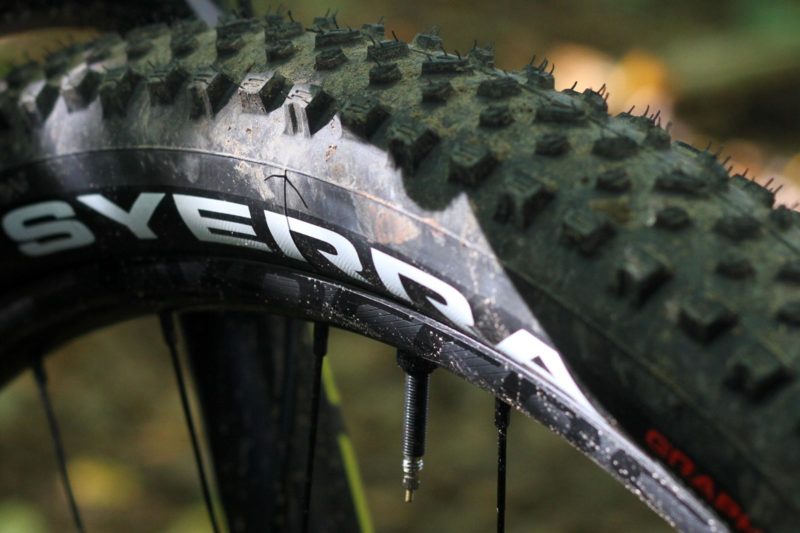 Vittoria Tires have released an new mountain bike tire specifically for Downcountry riding; the Vittoria Syerra. A supple yet robust casing construction is combined with a fast-rolling tread pattern made up of their proven 4C Graphene-containing rubber compounds. 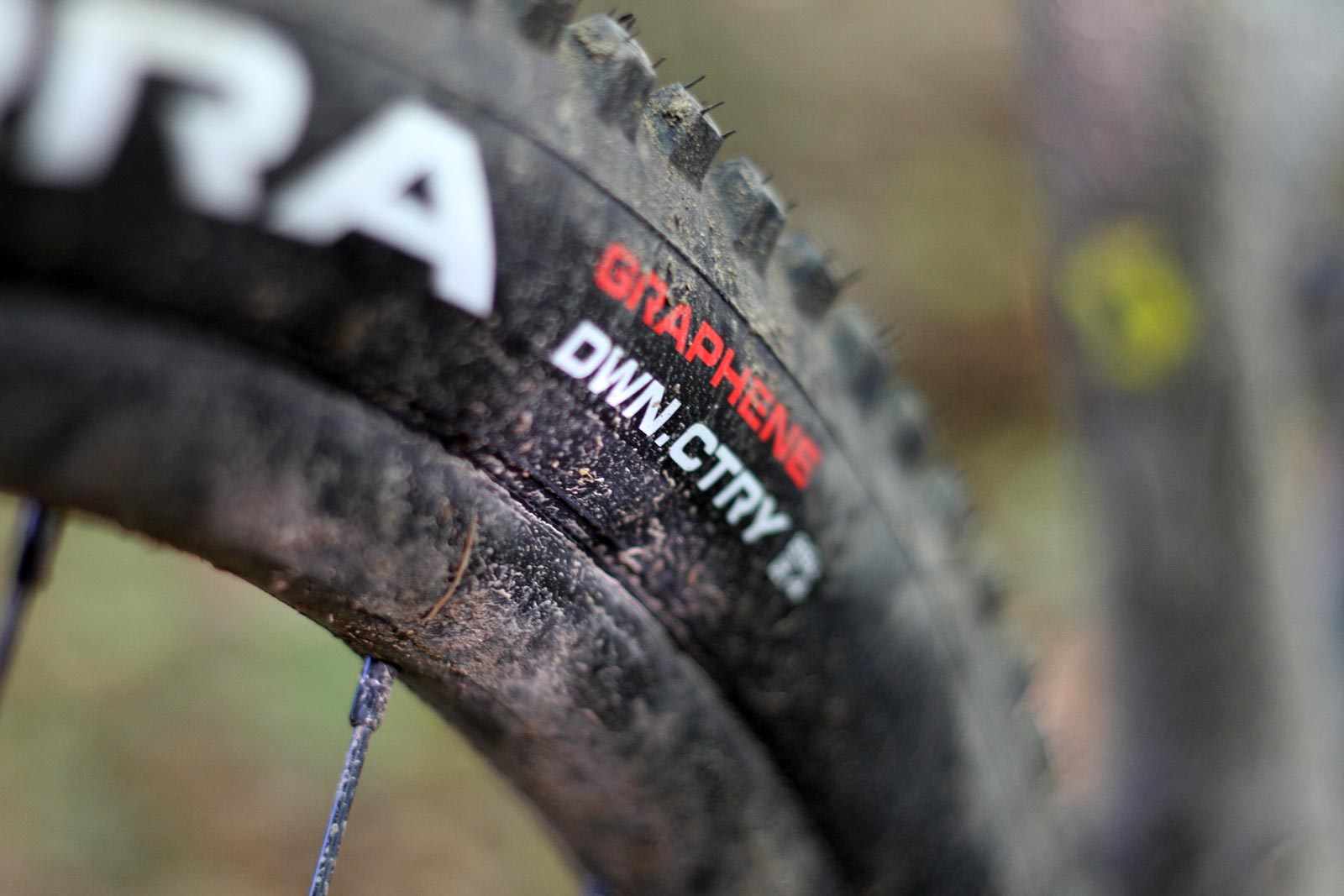 The Syerra is available in 29″ only, aimed at a segment of mountain biking that is still defining itself. What even is Downcountry, after all? At the launch event, Vittoria themselves define it as the fine line between XC and Trail Riding. They chose to showcase it with a pedal around the Glentress Trail Centre Red Loop aboard the new 120mm travel Scott Spark RC Cross-Country Mountain Bike. Here’s a quick explainer from Vittoria’s Ken Avery, first… 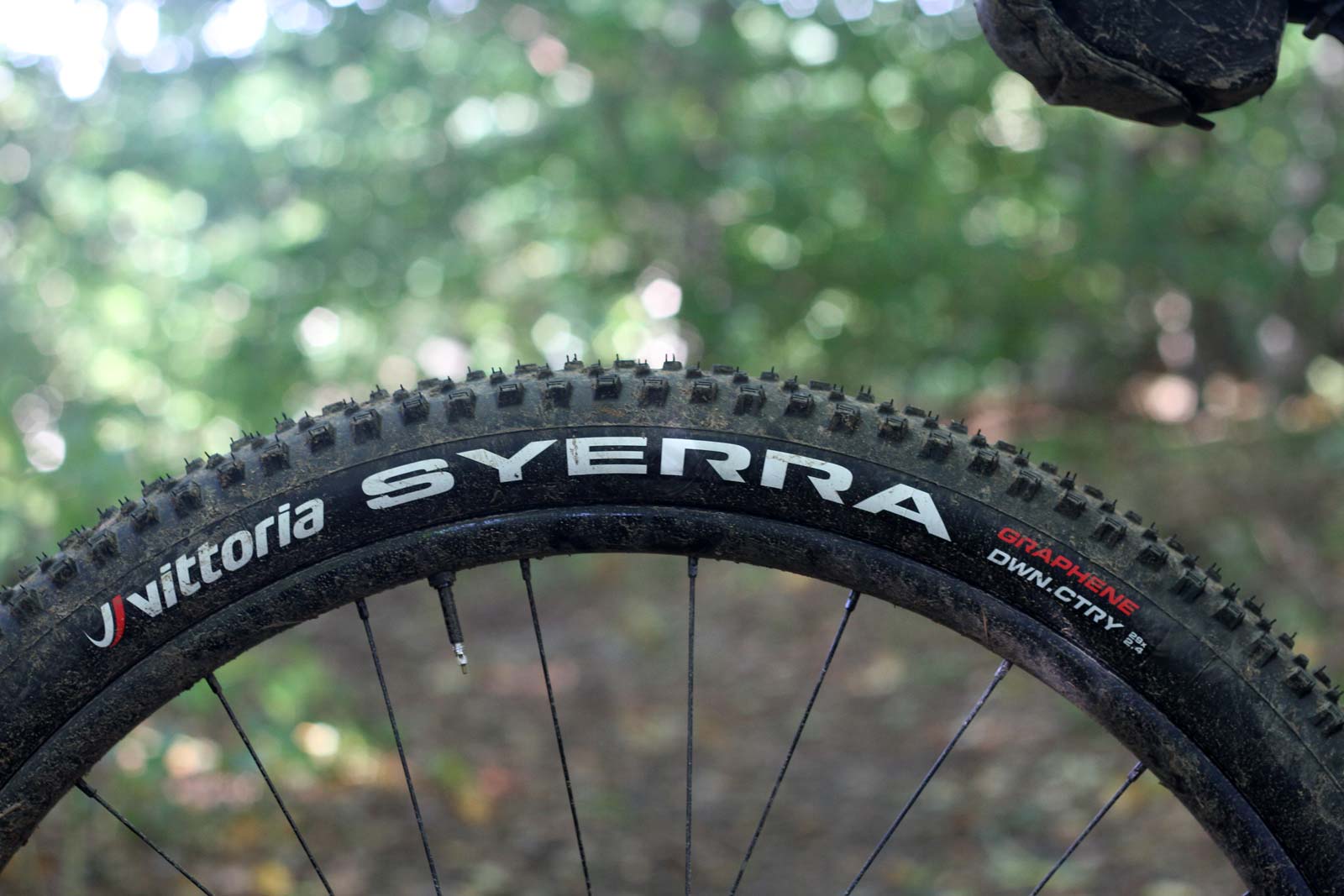 Thew new Vittoria Syerra is a 29″ x 2.4″ tire with a Nylon 60 TPI Casing and APF (Anti-Pinch Flat) insert in the sidewalls. Weighing in at a claimed 850g (868g, as measured by Jordan’s scales), the Syerra is lighter than their mixed-terrain Trail Tire, the Agarro, but heavier than their thoroughbred XC tires, the Barzo and Mezcal. 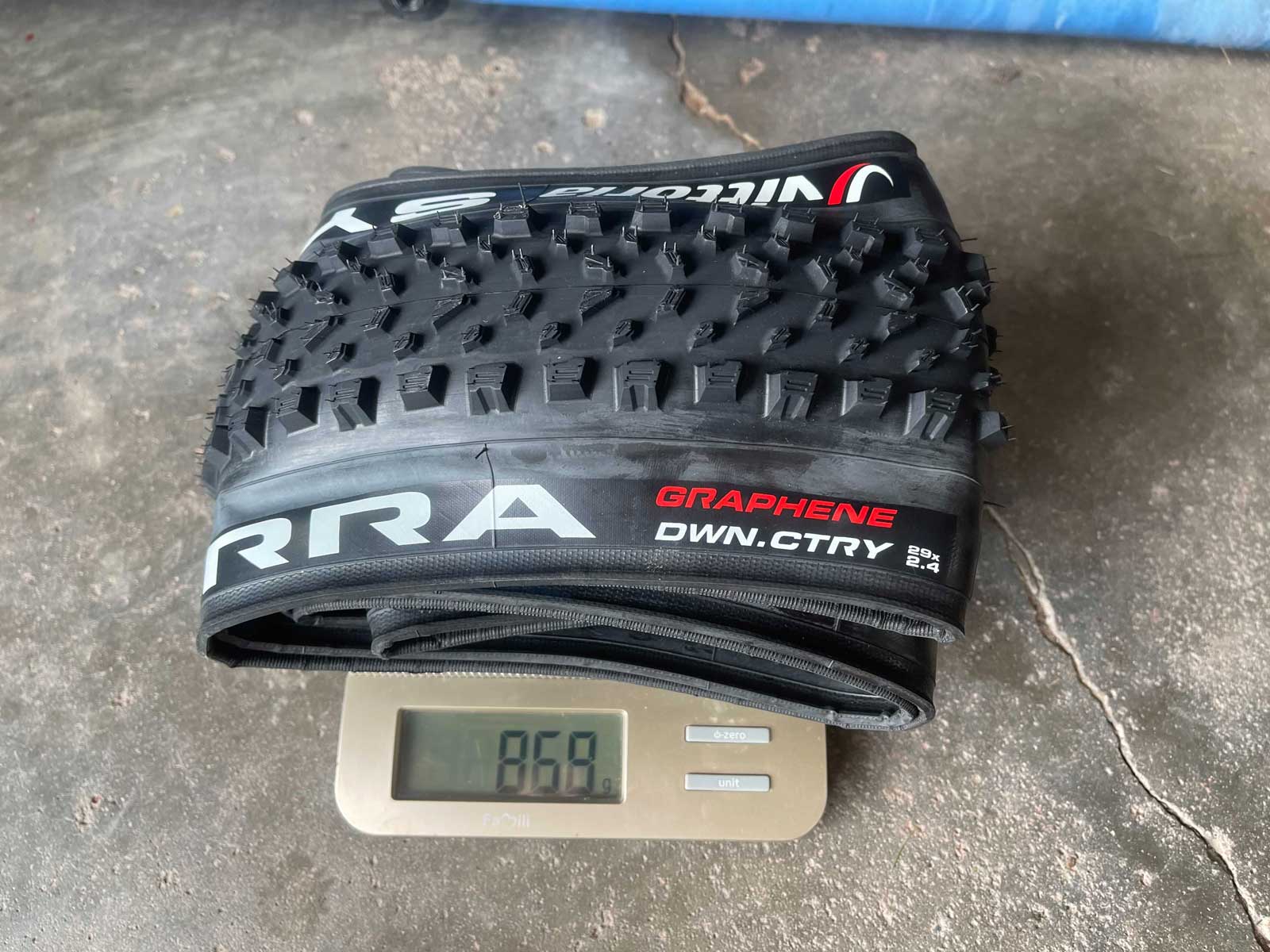 The Vittoria Syerra attempts to blend the fast-rolling characteristics of a cross-country tire with the more aggressive cornering capabilities, grip and robustness offered by a trail tire. So, how exactly does it do that? Let’s start with the tread pattern. 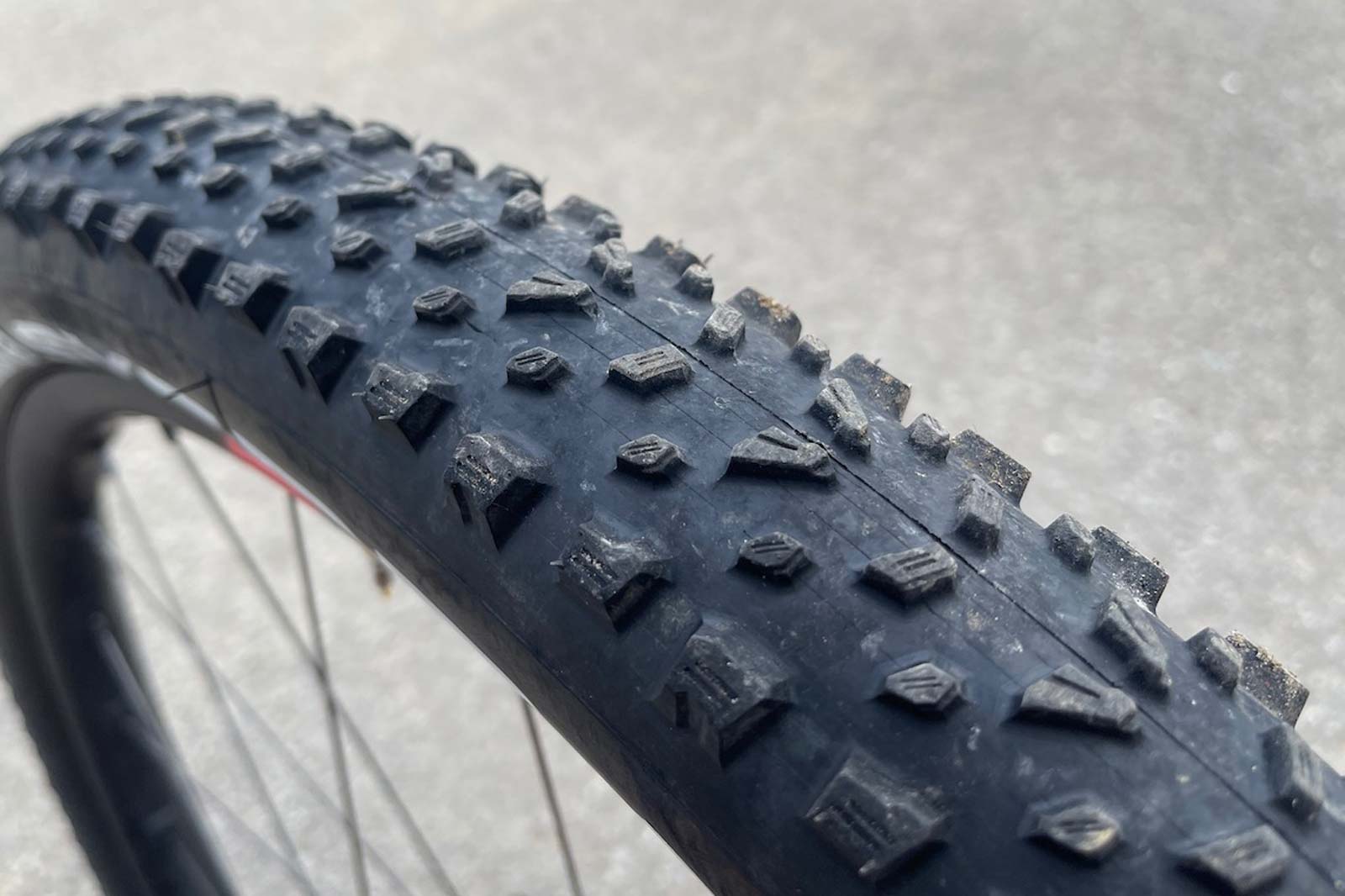 It’s not entirely dissimilar to the tread pattern of the Agarro trail tire, albeit more widely spaced thanks to the significantly smaller centre tread blocks. Like we see on the Agarro and Mazza, the leading edge of these centre blocks is stepped, designed to bite into the ground for good traction when climbing without negatively affecting rolling resistance too much. 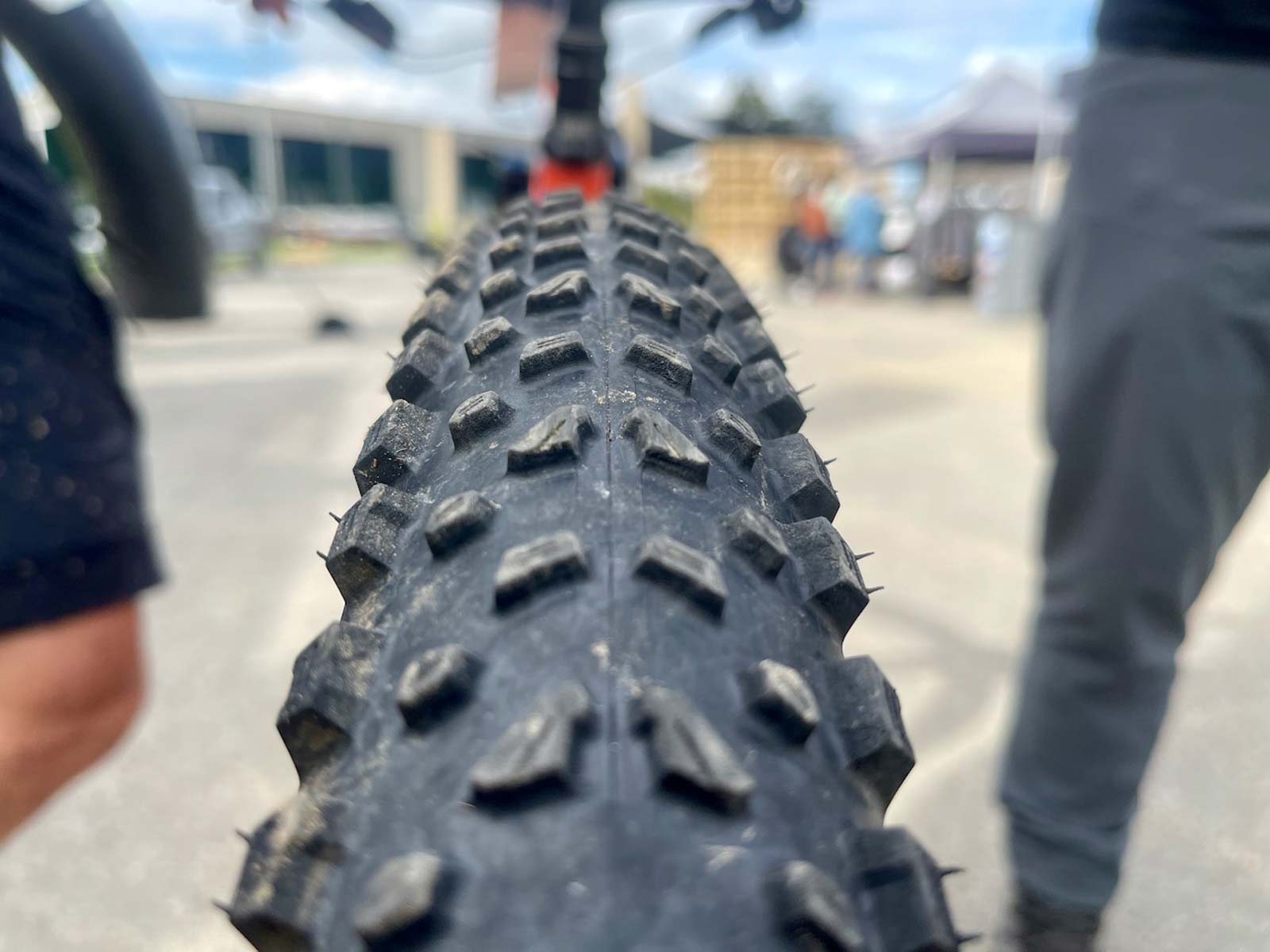 The leading edges present less surface area than the trailing edges, with the blocks flaring out at the rear to present a much larger and slightly more squared-off edge for braking forces to push against. Looking out toward the edge, we see much larger, taller side knobs for handling the harsh lateral forces associated with cornering. 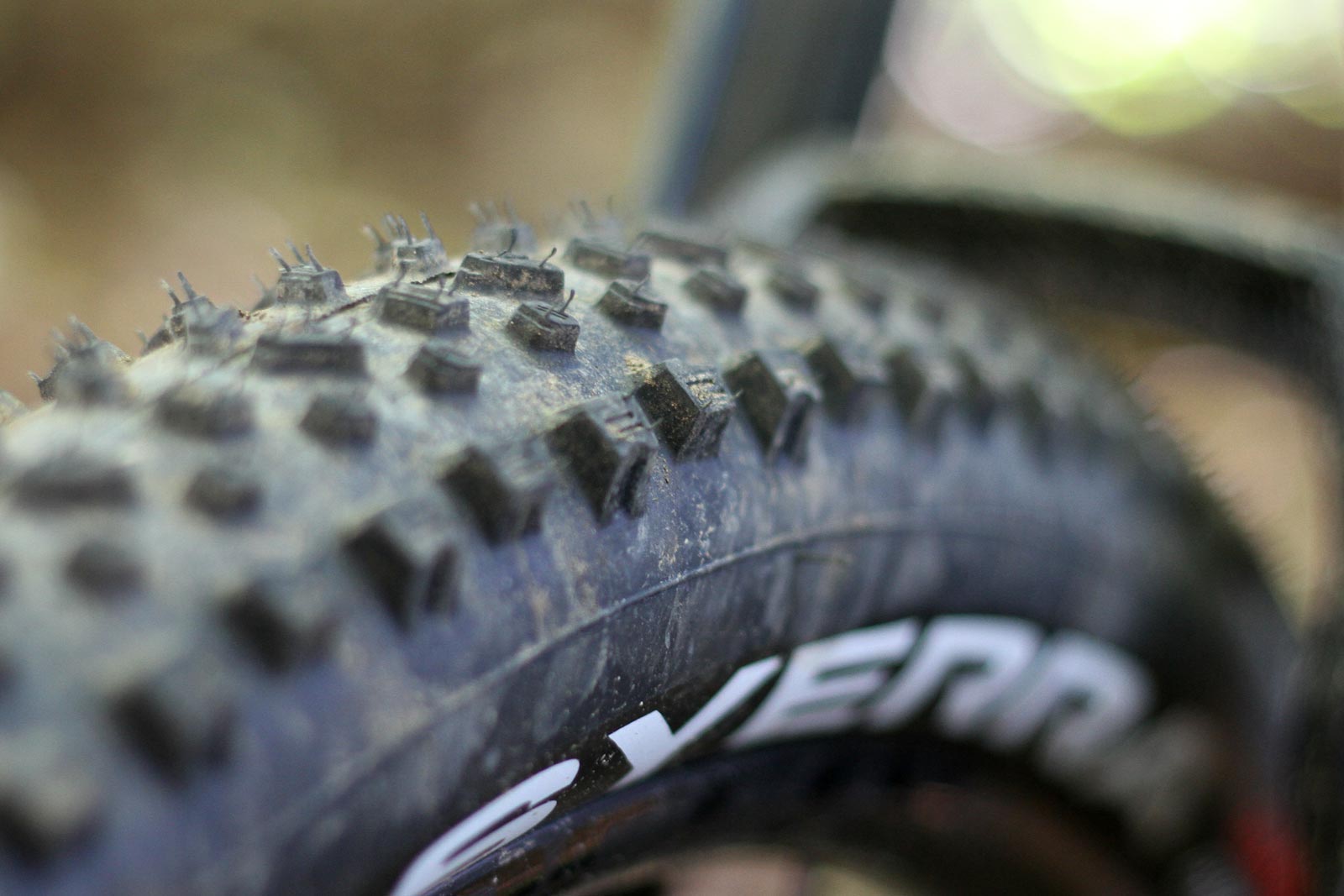 All tread blocks on the Vittoria Syerra feature some degree of siping the principle function of which is to introduce a little flex into the knobs, making the tread more supple for a more consistent contact patch with the ground. Some of these sipes, particularly those on the centre tread that sit perpendicular to the direction of travel, also present an additional edge for biting into the terrain.

Like all Vittoria Tires, the new Syerra Downcountry MTB Tire features their 4C Graphene-Containing rubber compounds, formulated to toe the fine line between grip and durability. The softness and rebound properties of the rubber differs across the tread pattern in relation to the function of the tread blocks in the different areas. 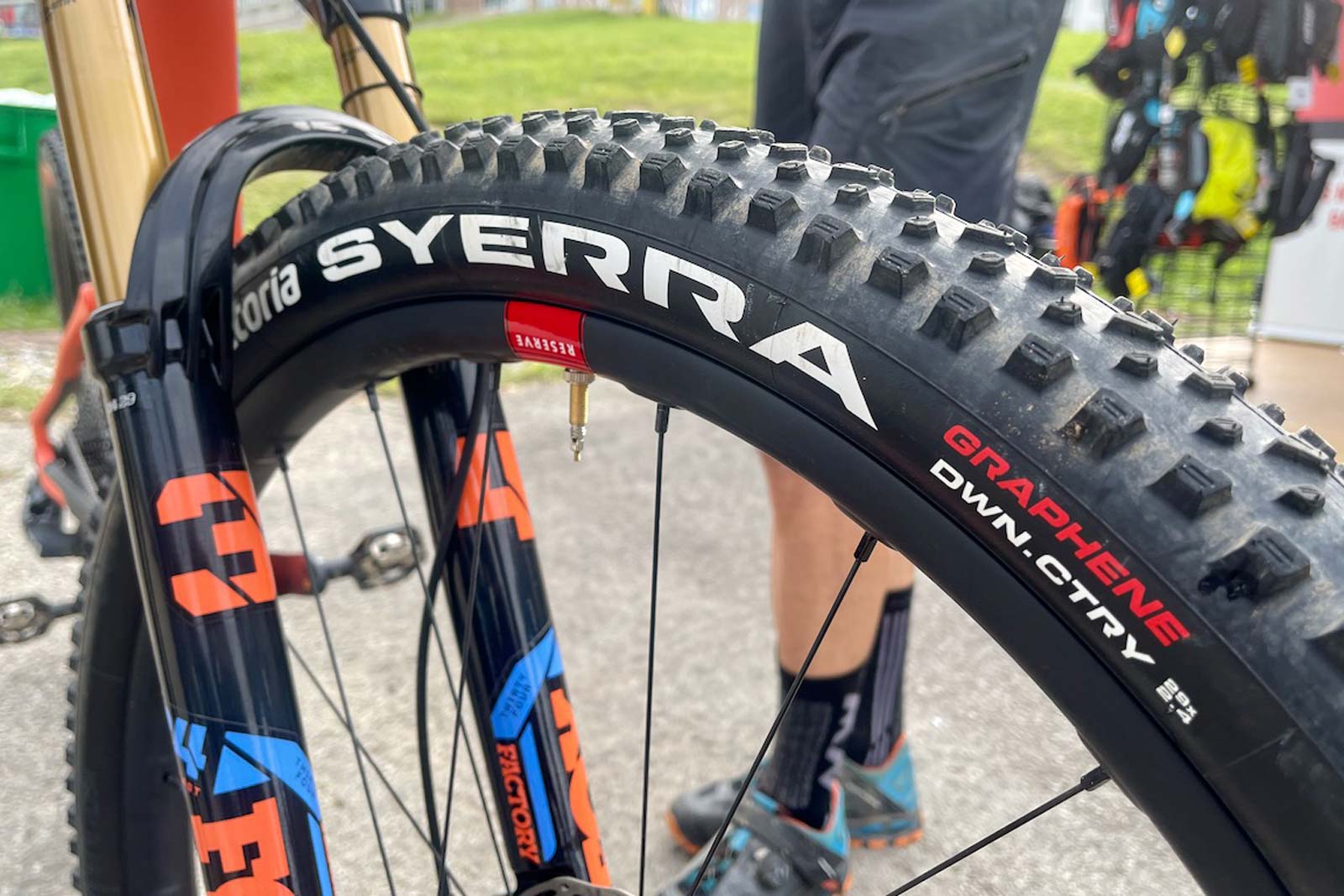 The centre tread gets quite a hard, fast rebound rubber compound, similar to what you’ll find on Vittoria’s out-and-out cross-country tires. At the edge, the situation is very different with the side knobs composed of a tangibly softer rubber compound with a lower rebound speed (as determined by the very scientific knob twist test).

Each tread block itself is also made up of two rubber compounds; a harder more durable compound underneath with a softer, grippier compound on top. Vittoria tell us the depth of that softer top layer extends at least as far as the depth of the siping, so when these disappear, you can expect the grip level to deteriorate slightly.

The Syerra has a single-ply 60 TPI casing, reinforced at the sidewalls with an APF (Anti Pinch Flat) insert. That insert beefs up the sidewalls significantly, stiffening them too for enhanced support. Above the APF insert, the tire casing is flexible allowing the tread region to deform over rough terrain, with a little lateral flex.

Note: This is simply a first ride review, but Jordan Villella will have a long-term review in due course. 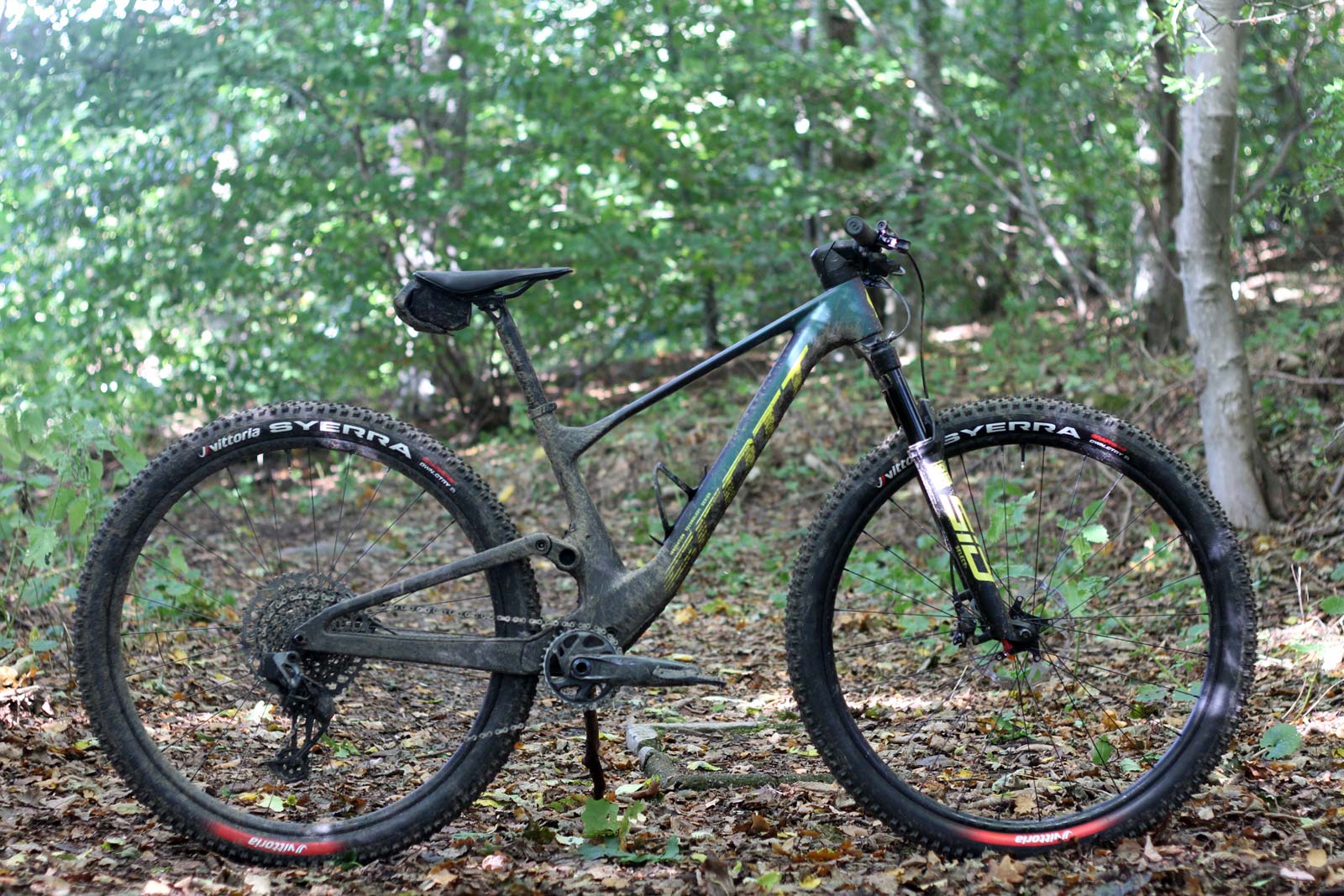 We tested the 29″ x 2.4″ Vittoria Syerra fitted to an aluminium Syncros wheelset (30mm internal width rim) on the new Scott Spark XC Bike (the one with a hidden rear shock). The tires were setup tubeless by the Vittoria team, inflated to 17 PSI in the front and 19 PSI in the rear. Those pressures were the same for everyone in the group, where rider weights ranged from 60 kg (me) up to somewhere in the region of 90 kg (wild estimate).

We rode the red-graded loop at Glentress, the UK’s most popular trail centre. Climbing terrain consisted of long stretches of smooth fire road interspersed with hard pack stretches of winding singletrack, lightly adorned with roots and slick, wet rocks. Heading up the hill, rolling resistance was low, with perceived effort fairly low considering the speed we climbed at. Being predominantly an enduro rider who rarely strays away from ultra-soft low-rebound rubber, i’ll leave my comments on rolling resistance at that.

On the drier patches of uphill sections of trail, the rear tire bit the terrain really well to propel the bike up steep slops with ease. On the damper, rockier sections of the climb, I did occasionally feel the rear tire spin out a little as it struggled to catch grip on the smooth  surface, wet rocks. 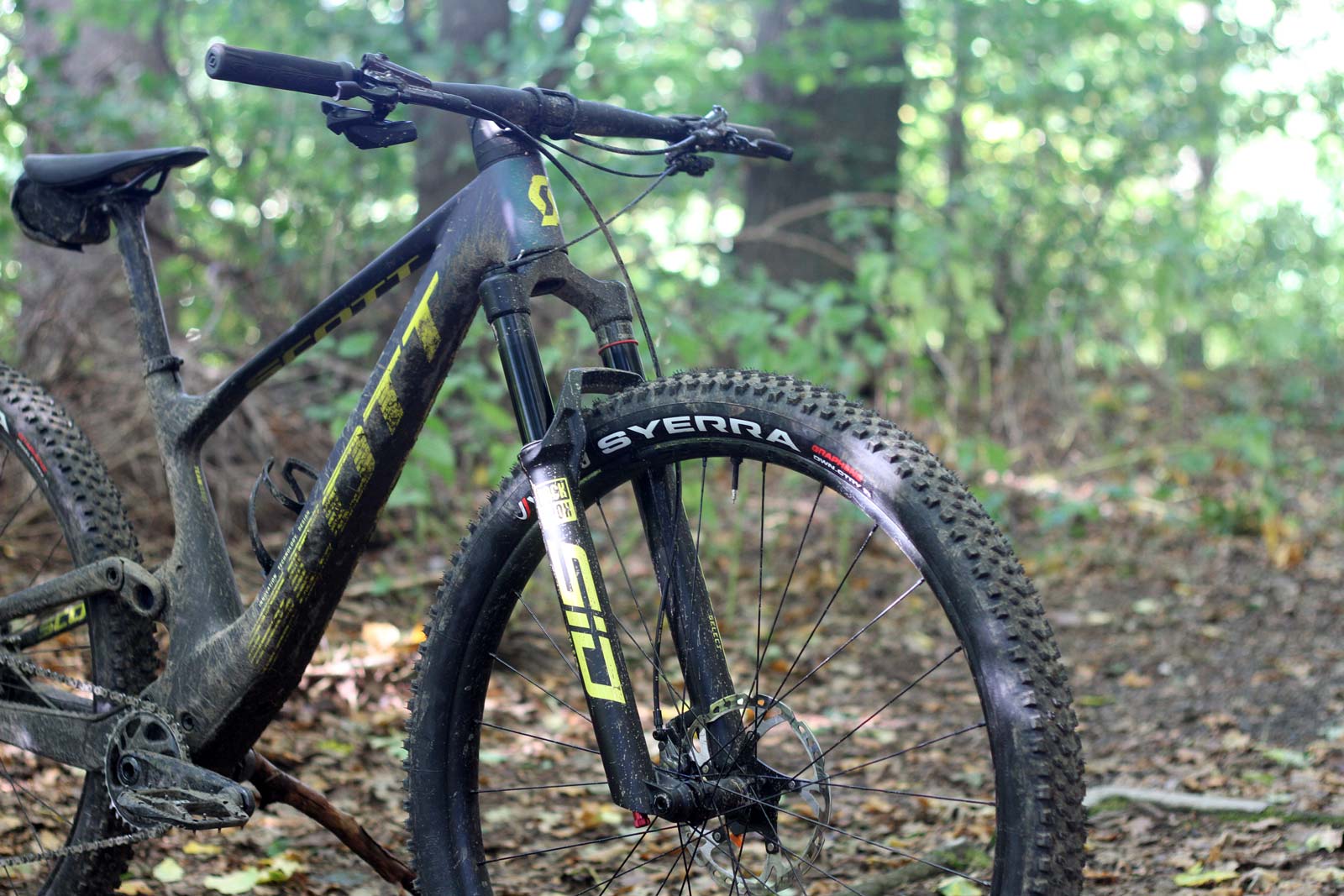 My Scott Spark RC didn’t have a dropper seat post. I was able to drop the seat a couple of cm south of seated-pedaling height, but not far enough. I felt quite pitched on the descents, with insufficient clearance to move around the bike to lean it and push into corners as much as I would have liked.

Despite that caveat, I must say I was pleasantly surprised by the Syerra’s cornering capabilities. Though not terrifically technically challenging, the trail does feature a good number of loose, flatter corners with little support; corners where it’s very easy to wash the front end when pushing on.

I rode tentatively at first, concerned the front end might not be able to hold grip around these gravelly corners. My worries soon disappeared; not once did I feel the front end go vague, or begin to wash out over the loose ground. As I say, this was a pleasant surprise. The side knobs offered good bite when called upon. 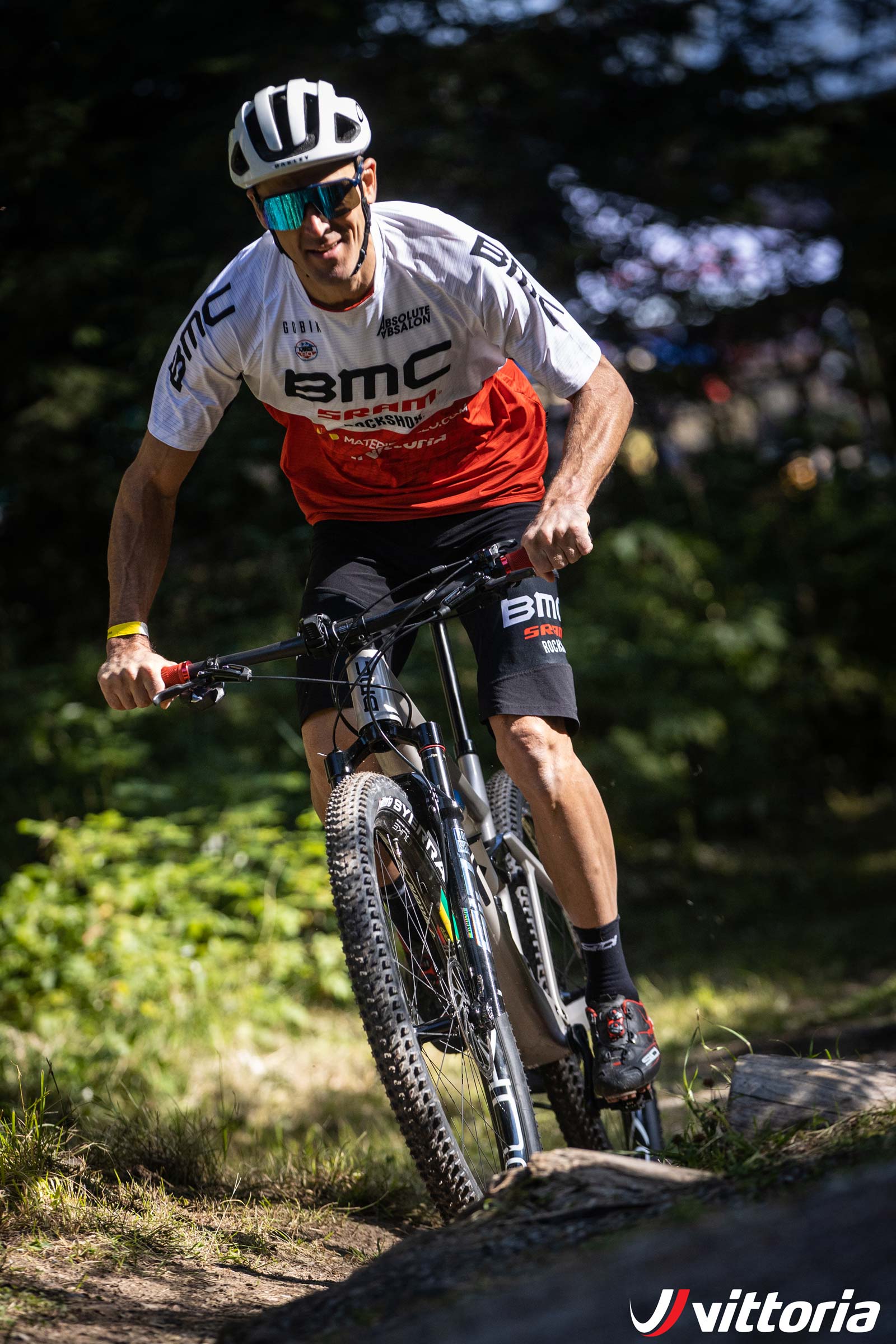 Not me: Julie Absalon has been involved with development and testing of the Vittoria Syerra

At 17 PSI and 19 PSI, I felt the tires were plenty comfortable, deforming over the terrain and providing a nicely damped ride feel. There were a few occasions where the tires made a very loud ping as they rebounded off sharper rock edges, but that didn’t translate into a pinball feeling for the rider.

For the hell of it, I did drop the tire pressure to 14 PSI front and 16 PSI rear for the final descent; not because I felt I needed it, but because Tommaso Cappella, Vittoria’s Product Specialist, suggested that lighter riders can get away with running these low pressures. Honestly, I couldn’t feel the difference. The ride comfort was still good, as was the cornering grip. I must say, I never felt the tire roll or become vague at any time, even at these lower pressures. I credit this to the thicker threads of this 60 TPI tire and the support offered by the APF insert.

The Vittoria Syerra Downcountry MTB Tire is available now in 29″ x 2.4″ with a black sidewall only, retailing at €60,95. 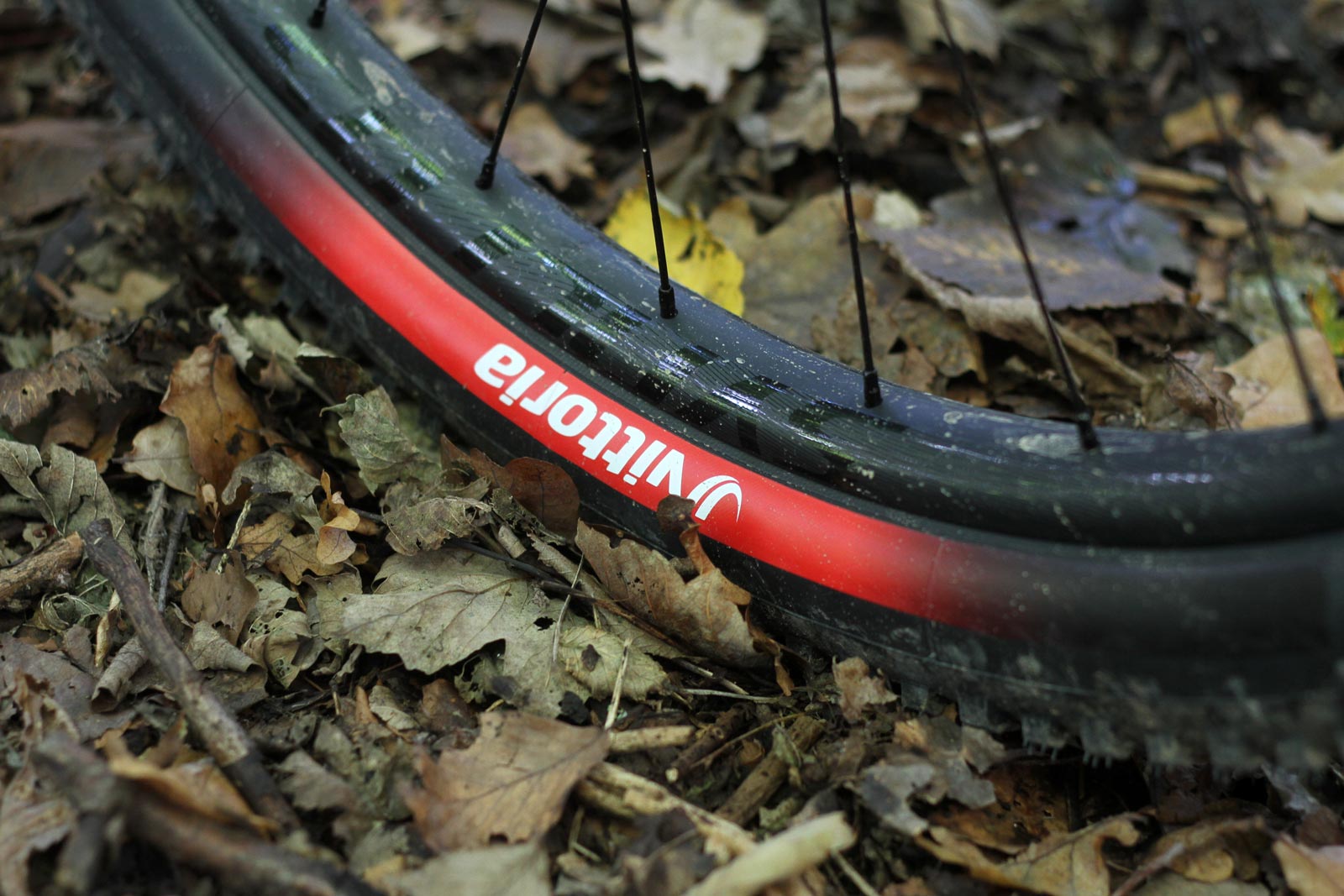