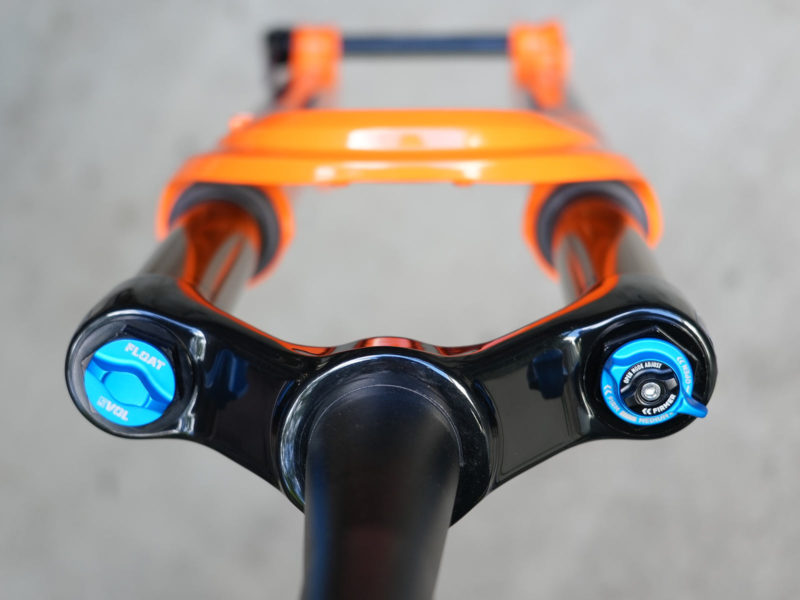 The all-new MY22 Fox 34 mountain bike fork borrowed a lot of design cues from the bigger, heavier 36 and 38 forks, yet it uses those features to drop a lot of weight from the prior model.

As the sweet spot in travel for down country, fun country, and trail bikes, the 120-140mm travel 34 has a lot of bikes looking at it to both save weight and offer crazy good performance. So, how did they chop about 200g off the Factory level fork without giving up the stiffness and traction it’s known for? Let’s take a look… 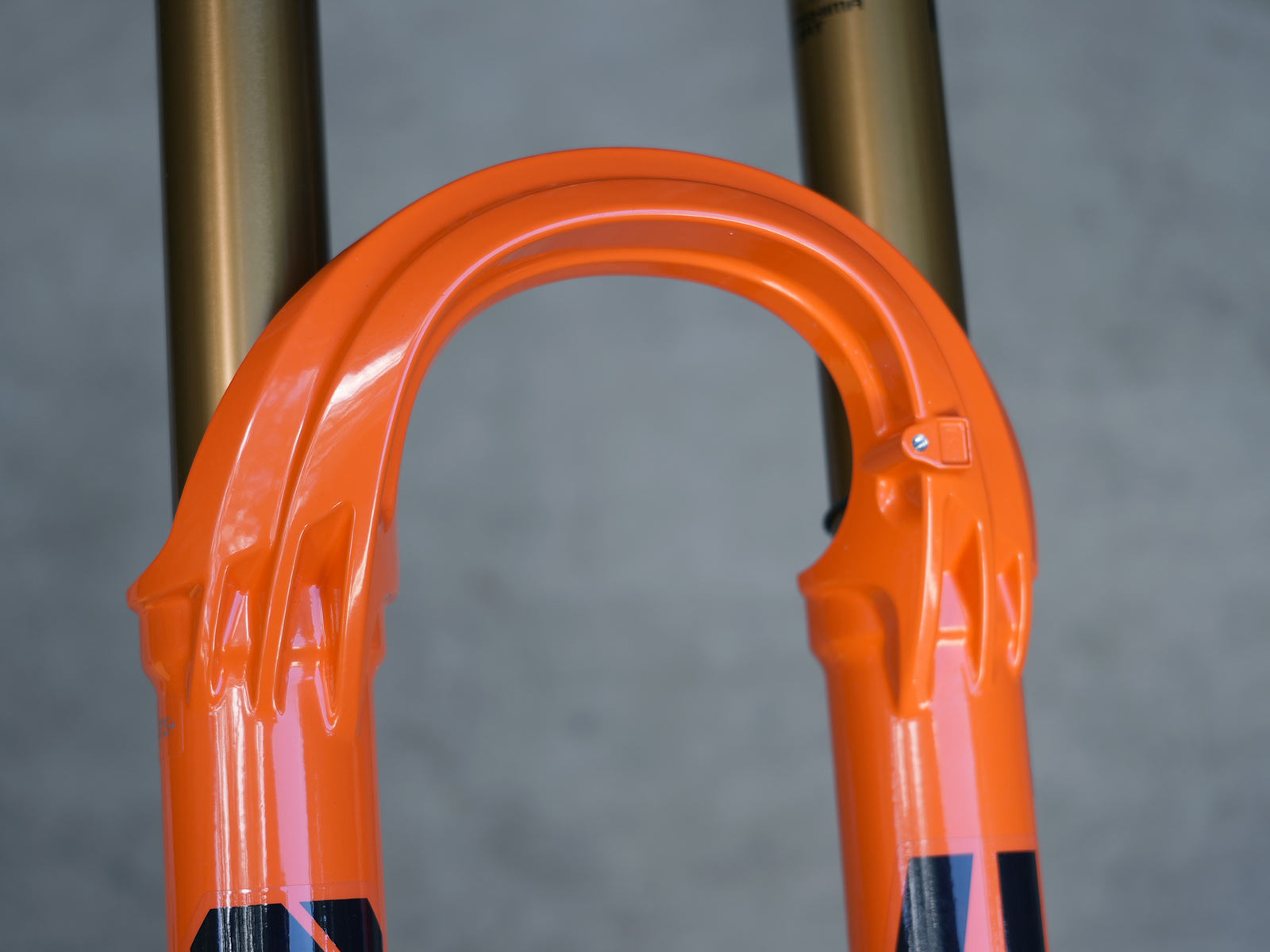 The most visible difference is the new arch, which looks much bigger and rounder than before. The extra ribbing and wrapping around the tops of the lowers helps it resist torsional flex and keep the legs sliding in the same direction. 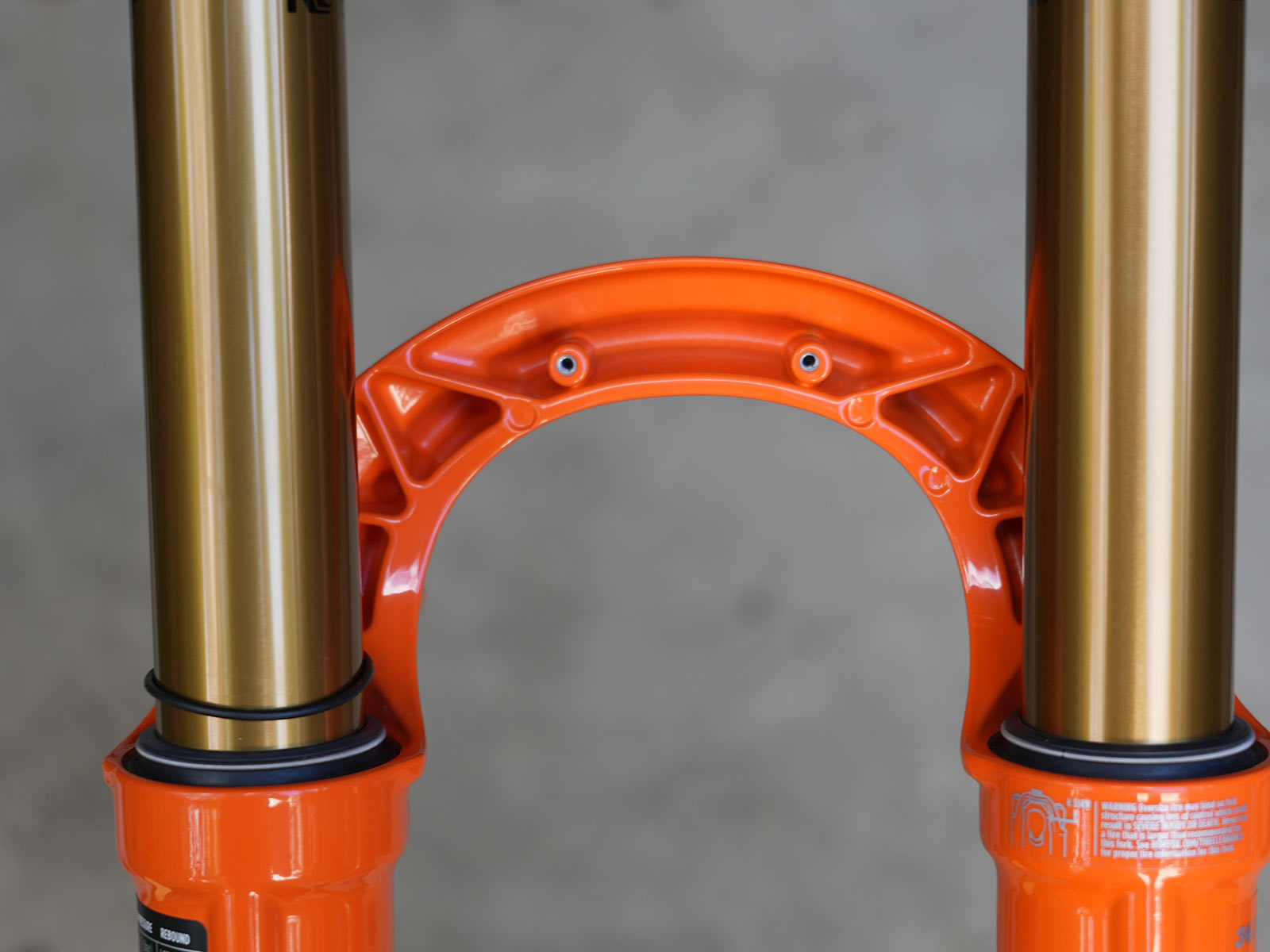 On the back are a few bracing elements, but note how it extends its connection farther around the top of the lowers, just below the wiper seals. The two threaded bolt holes are for attaching their Live Valve sensor. They might work for a fender…Fox just doesn’t make one for the 34. 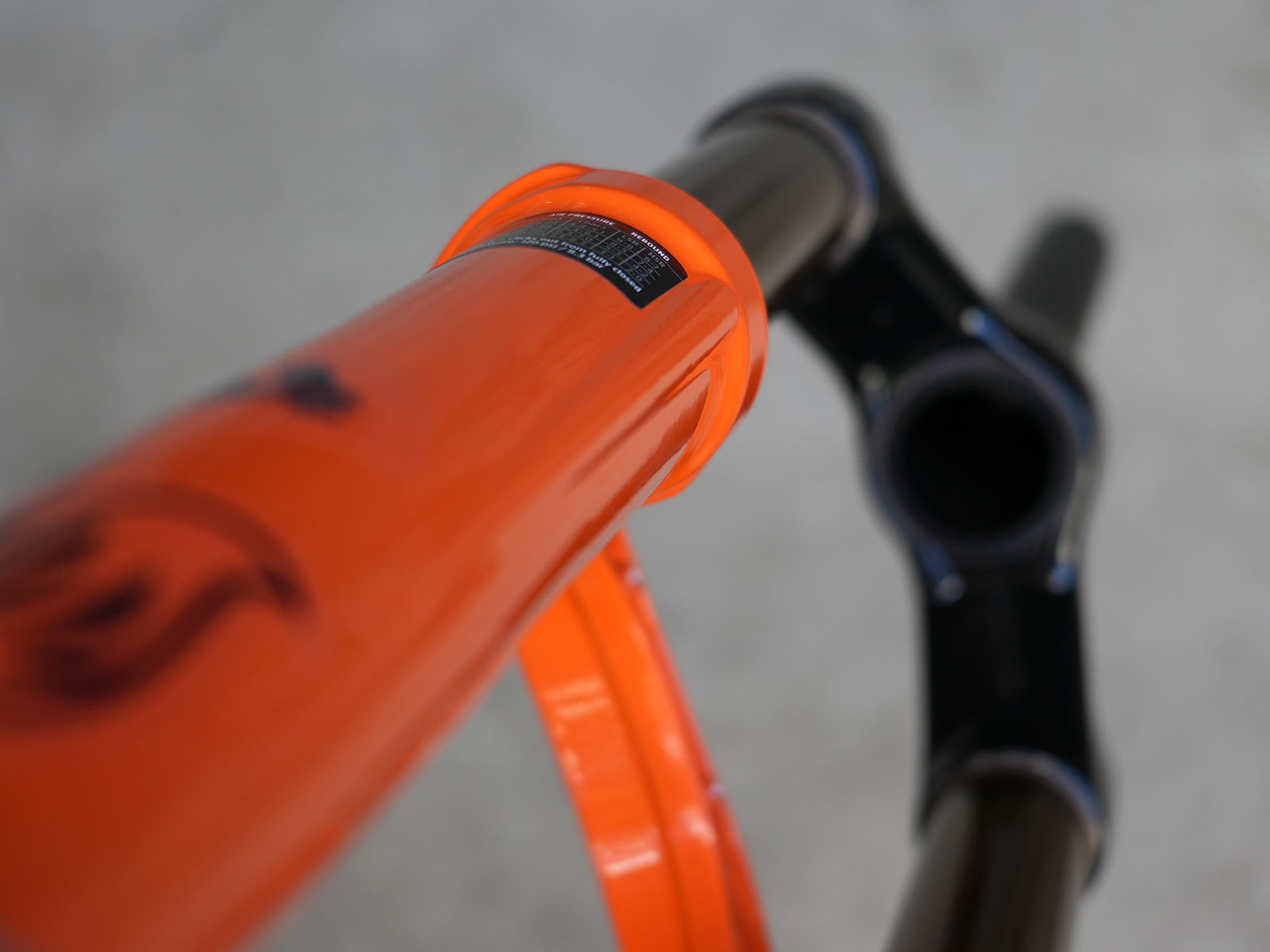 The new 34 gets these extra volume channels on the backs of the legs. This adds a bit of air volume to the space inside the lowers. While not technically part of the air spring, that air also gets compressed when the fork is compressed, so increasing the volume means it has less of an effect on the suspension’s performance. 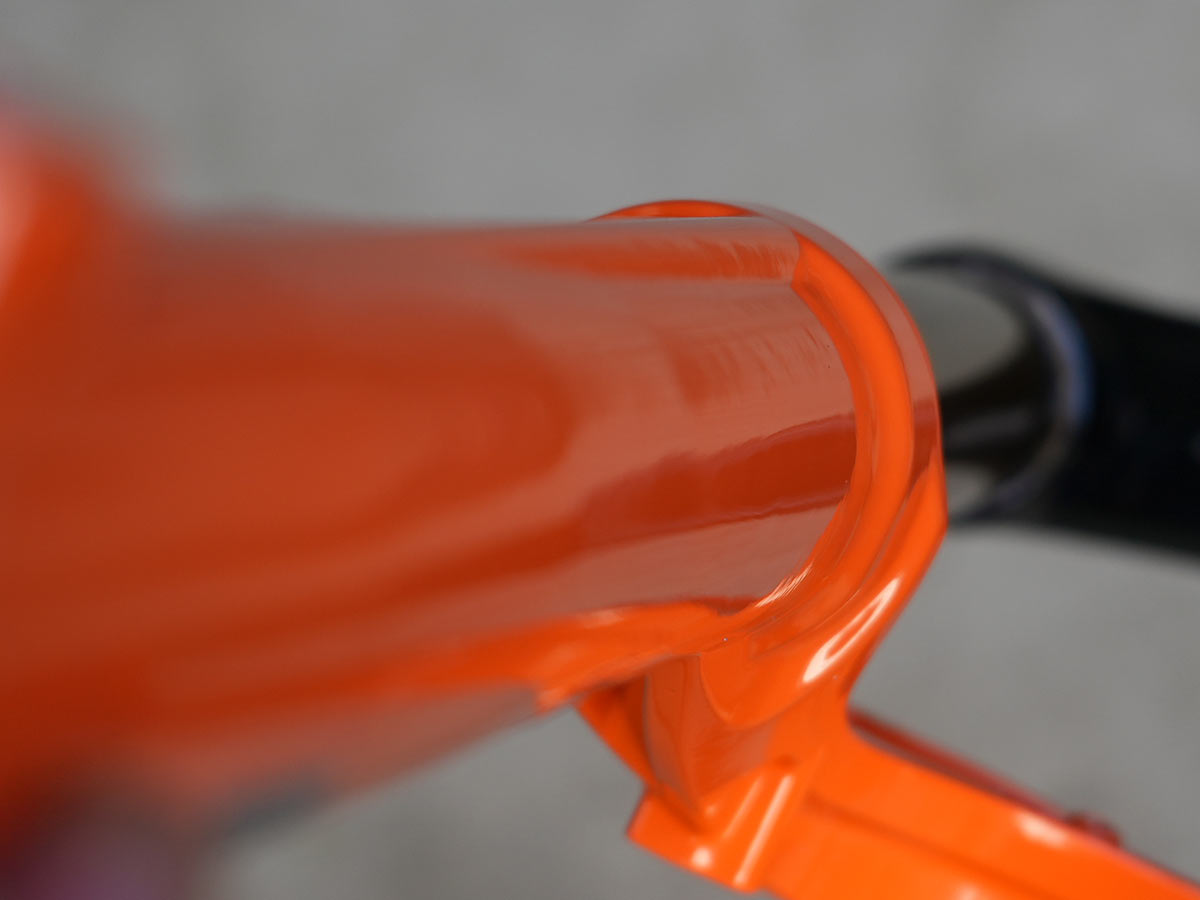 Fox says these channels also help oil get up to the top of the fork more easily, too. 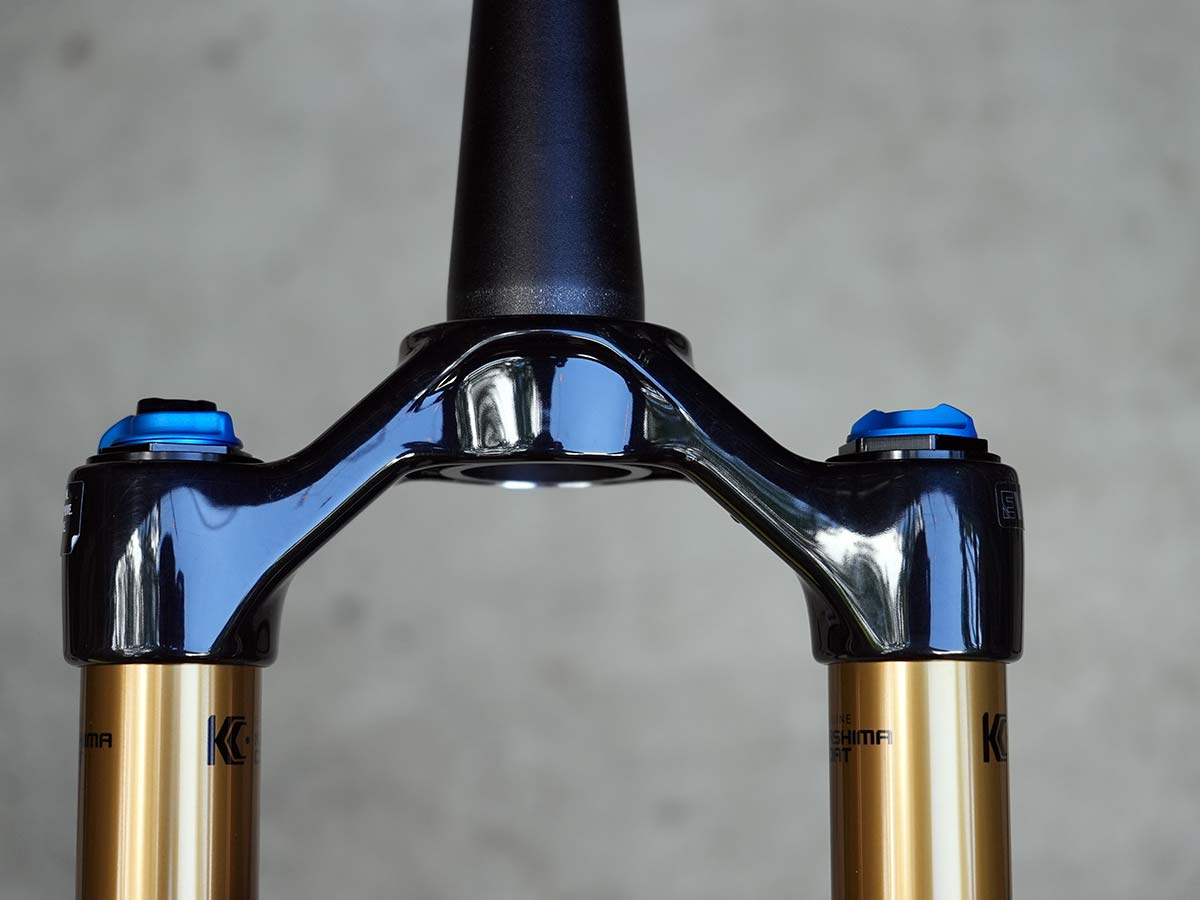 The new crown has more ridges and shaping, which are both functional and aesthetic. They likely make it stiffer, but also help fill that space under your headtube now that so many bikes are using really fat head tubes. 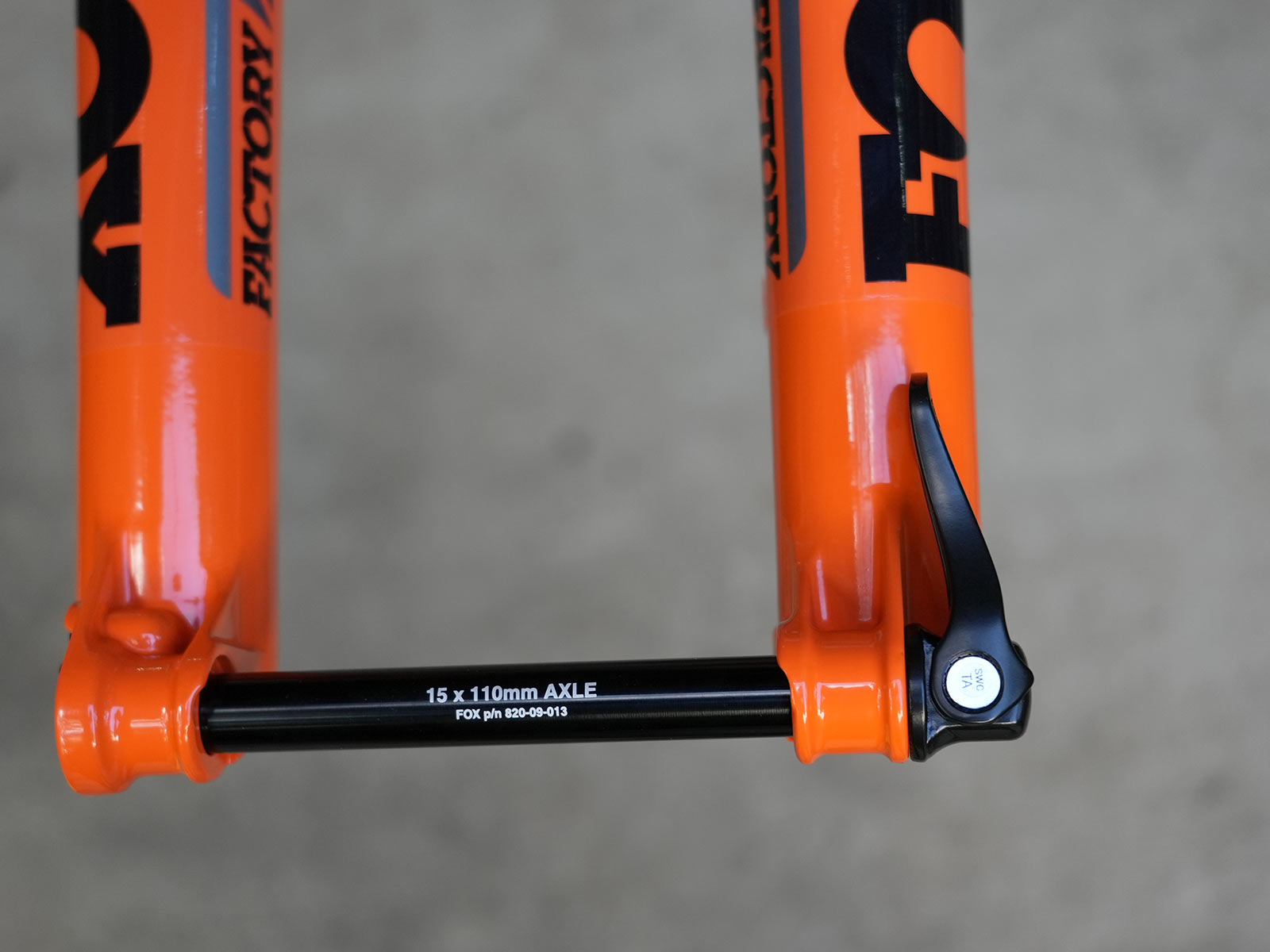 A little extra chiseling around the dropouts saves more grams, which will become more apparent when you see it side by side further down. Order it with the tooled Kabolt thru axle to save more weight, you’ll see that even with this quick release version they saved a few grams.

The Factory level fork is available with their top-of-the-line GRIP2 damper, which is what our test fork’s sticker says we have, but this one is the FIT4 damper…which is a claimed 70-75g lighter. More on that below.

Get the full tech story on the fork in our 2022 Fox 34 launch coverage. Now, let’s see it side by side with the prior model… 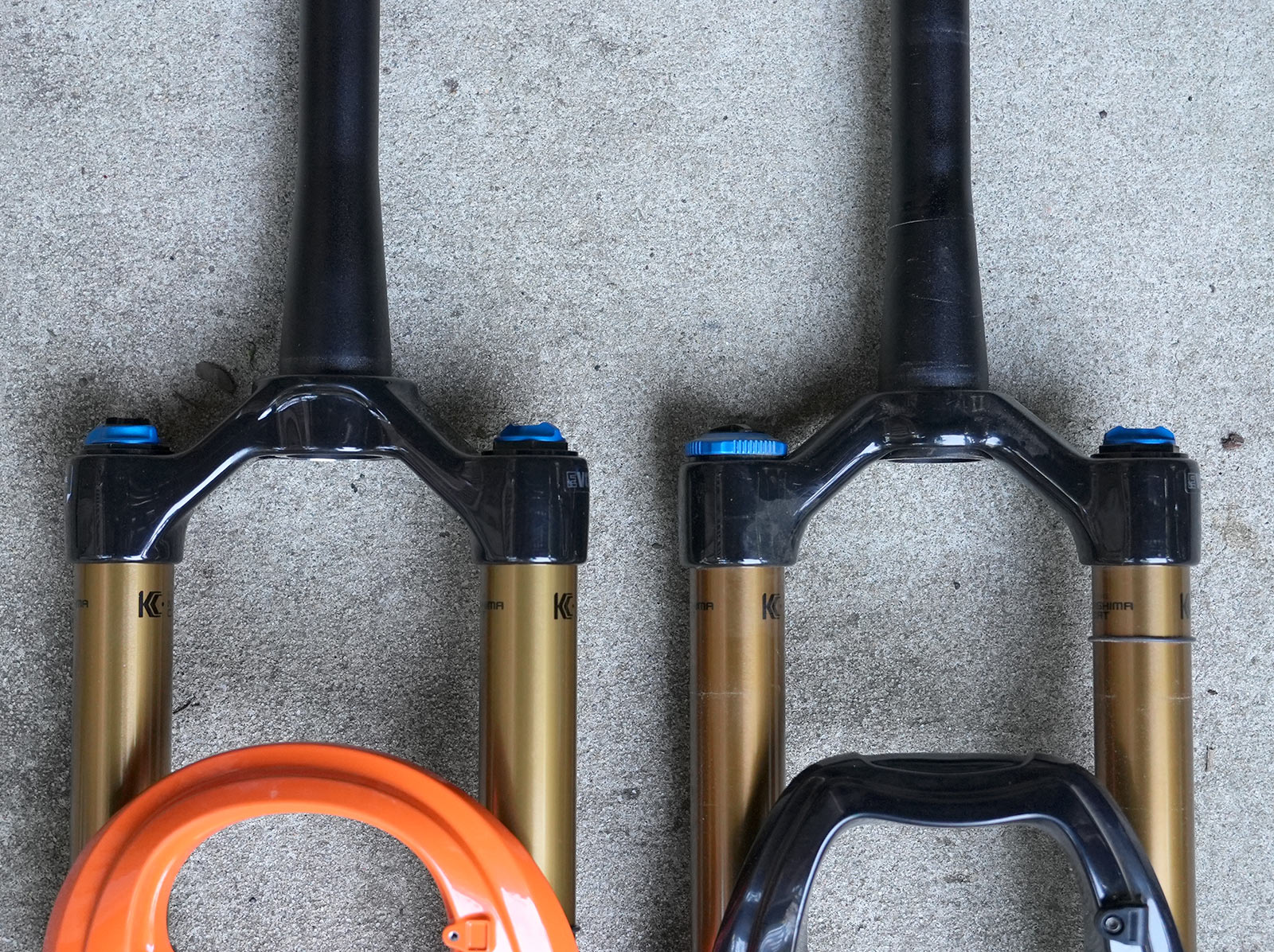 The orange fork is the newer MY22 model, and the black fork is a MY21 Factory level Fox 34 for comparison.

How does the new MY21 Fox 34 suspension fork compare to the prior MY21 model? We’ll get to performance differences in our upcoming review, but here’s a visual feature comparison to show how they cut so many grams, and where they saved weight.

Starting at the top, the crown’s extensive shaping continues to the bottom, too, with a slight recess punched in where the steerer tube is bonded into place. While the new model’s crown doesn’t immediately look much better, you can see how it fills in the space better. 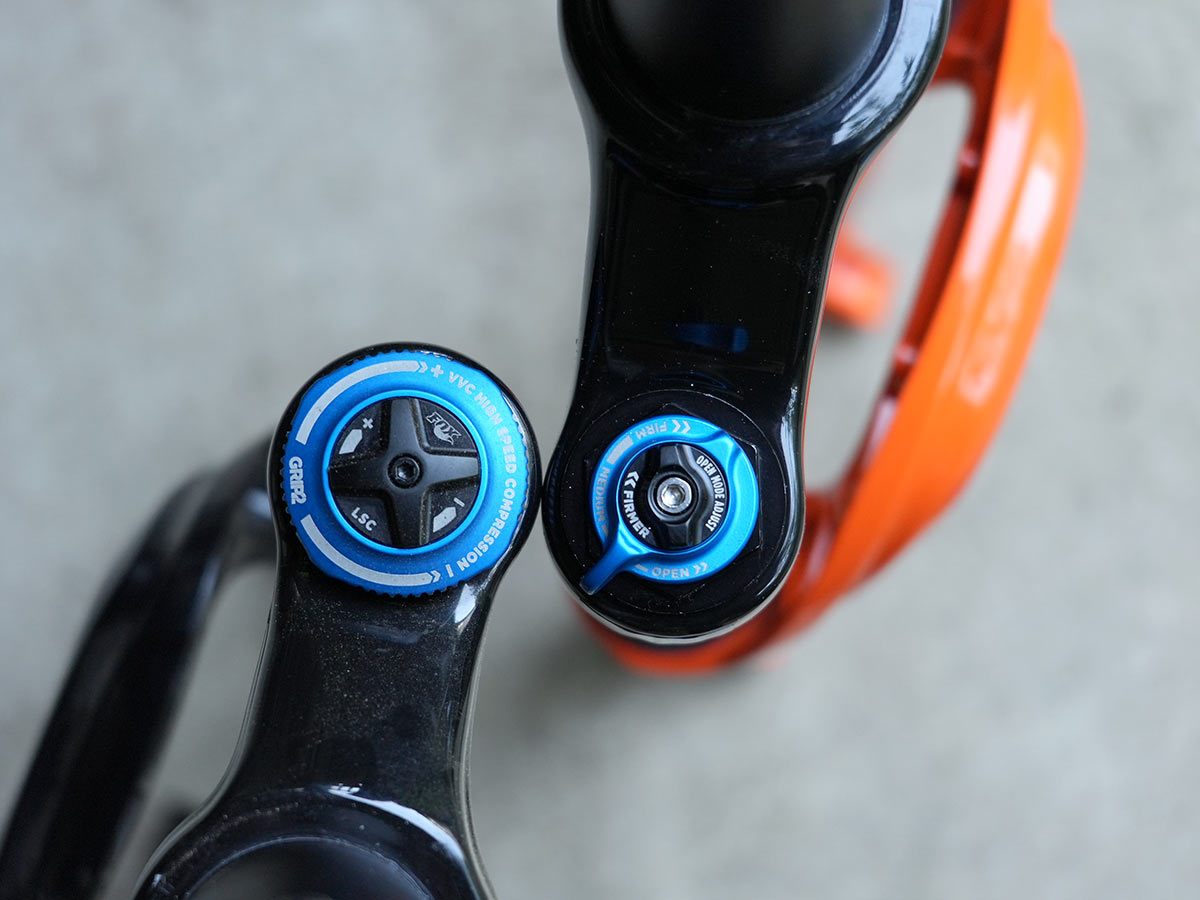 The GRIP2 damper is their premium damping tech, delivering a lot of clicks to help you fine tune the high- and low-speed compression and rebound damping with individual knobs for each. It also has a bit more advanced valving inside.

The FIT4 damper uses a simpler 3-position external compression adjustments (Firm, Medium, and Open) with a 22-position dial that lets you fine tune the low-speed  “Open” mode’s damping. Think of this as the Climb, Trail, Descend switch that with proper setup on the air spring you can probably just leave in Open the whole time.

Why opt for the FIT4 damper? Fox says it’s a bit firmer, making it a good choice for those who are on more pedally trails, or more of a racer looking for a fork that feels a little more efficient. Or weight weenies…because it’s ~70g lighter.

Side by side you can really see how much more robust the new arch looks. 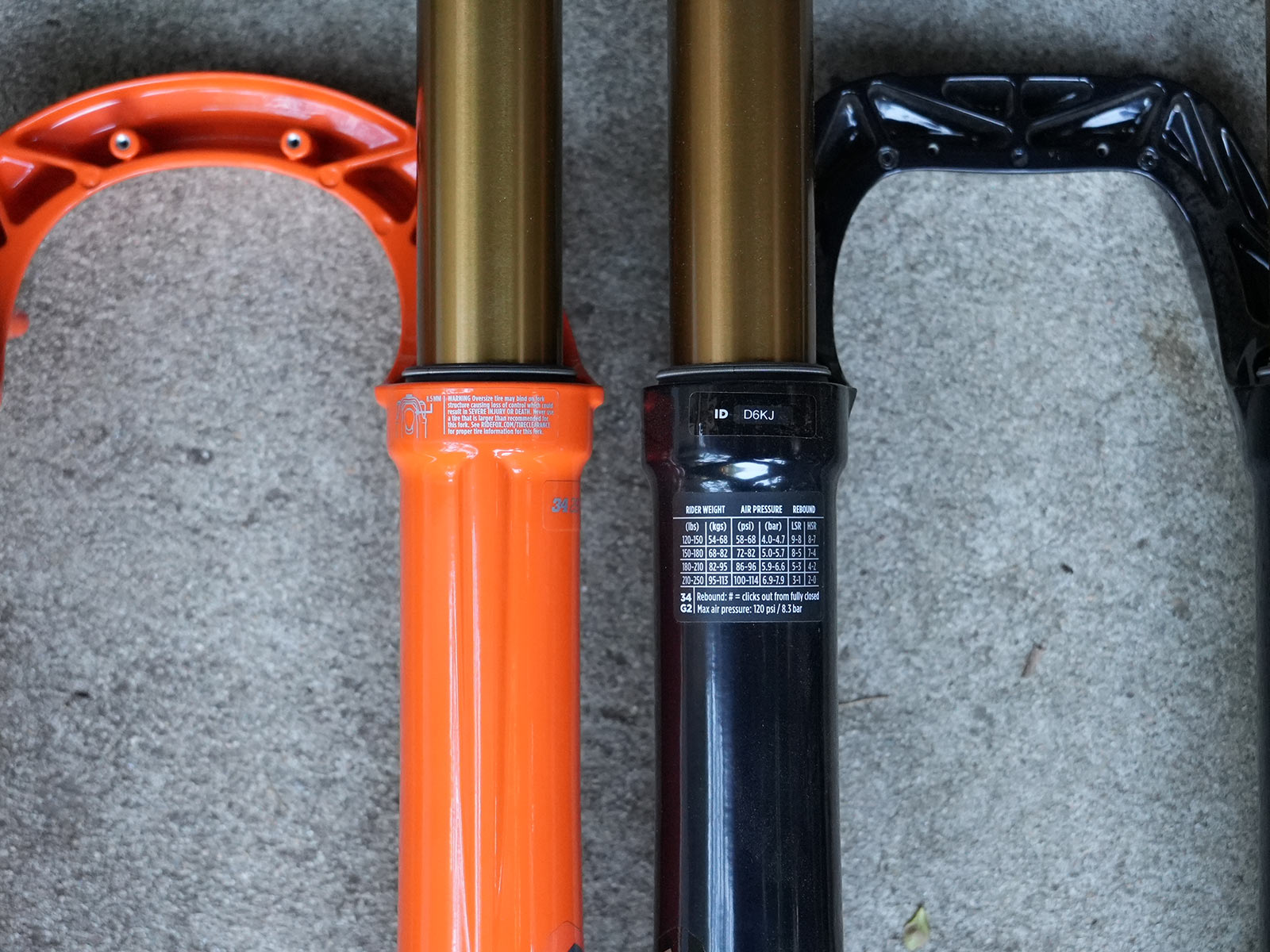 There appears to be less material on the backside of the arch, too. Check out the tops of the lowers, where the arch meets it and wraps around a bit more. The lowers’ legs look just a bit leaner, but gain the extra volume “straw”. 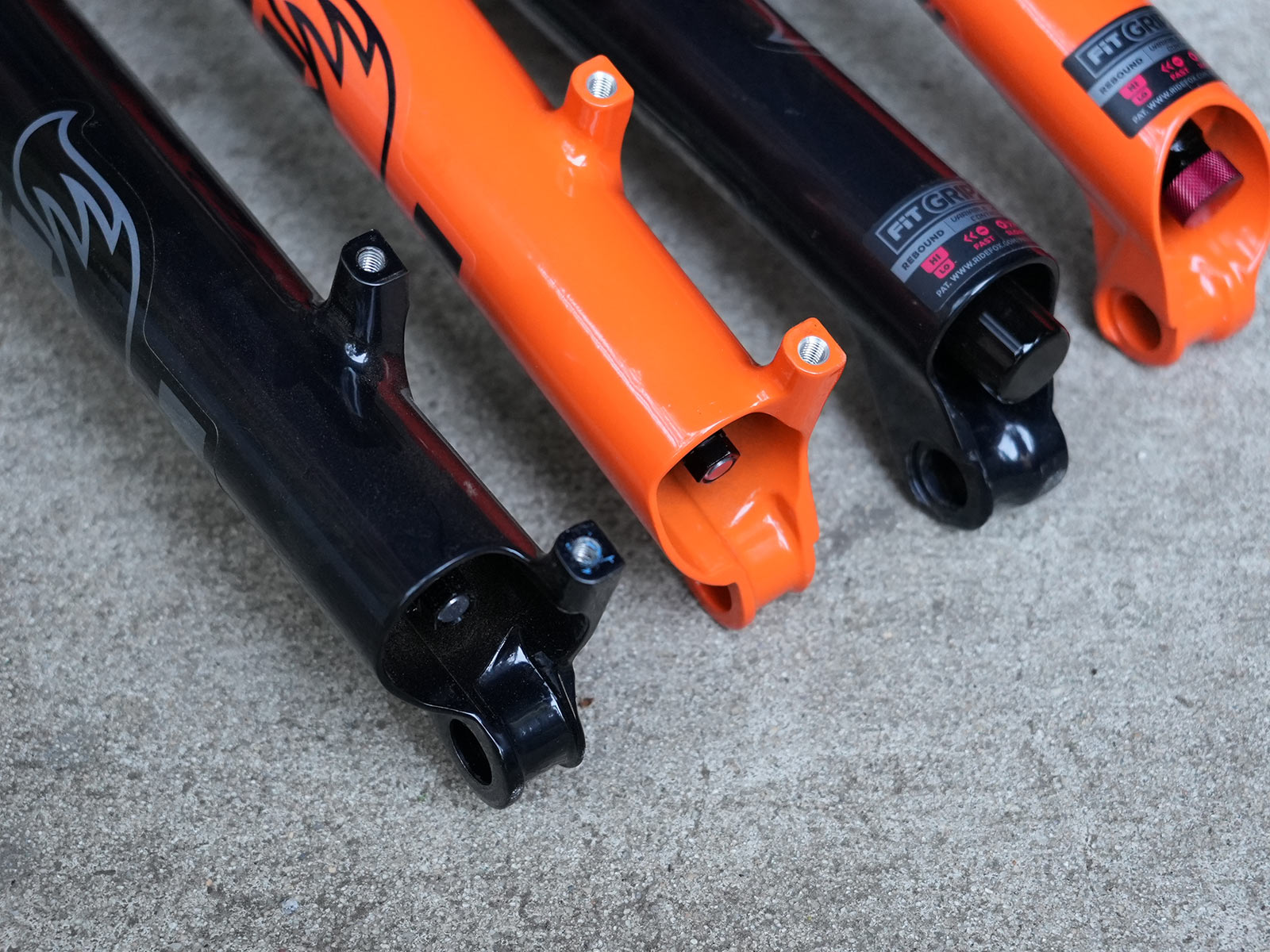 The bottoms of the legs get a bit more of the shroud removed on the backside, but it dips lower on the front, wrapping directly into the bottom of the dropout. 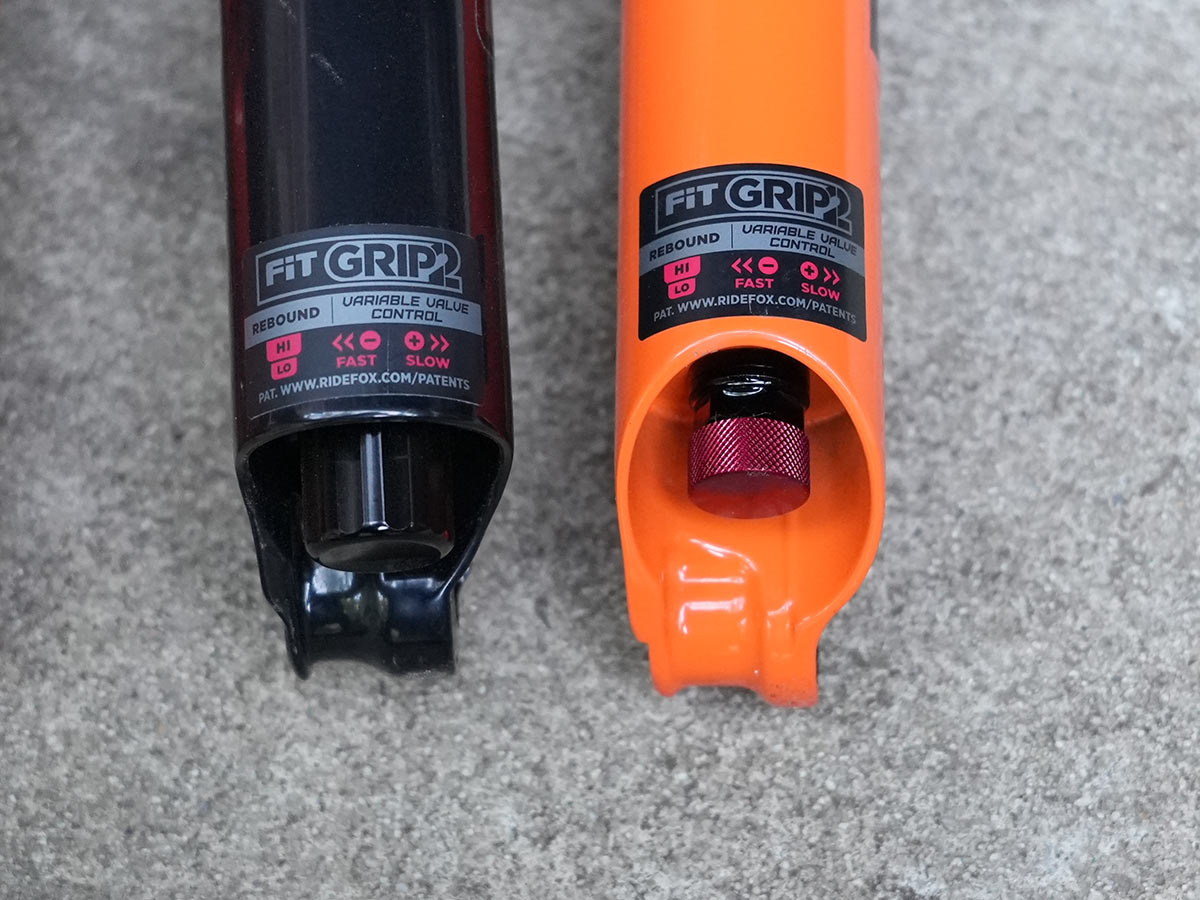 We got the wrong sticker on our new fork.

From this view some of the little differences are more apparent. Note the extra material at the base of the lower where it connects to the dropout, on the inside (left) face. 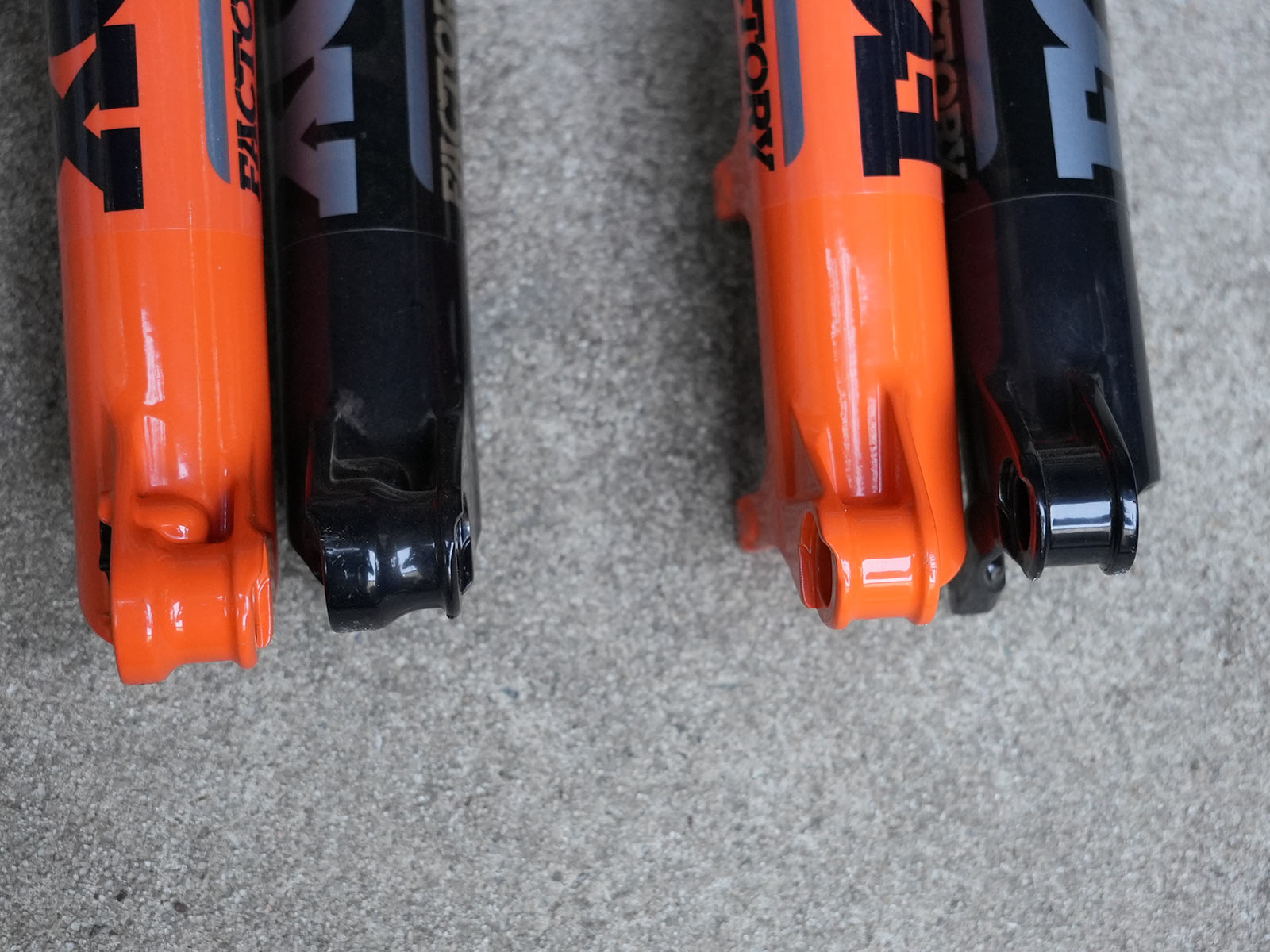 The dropouts themselves have a few minor differences, too. 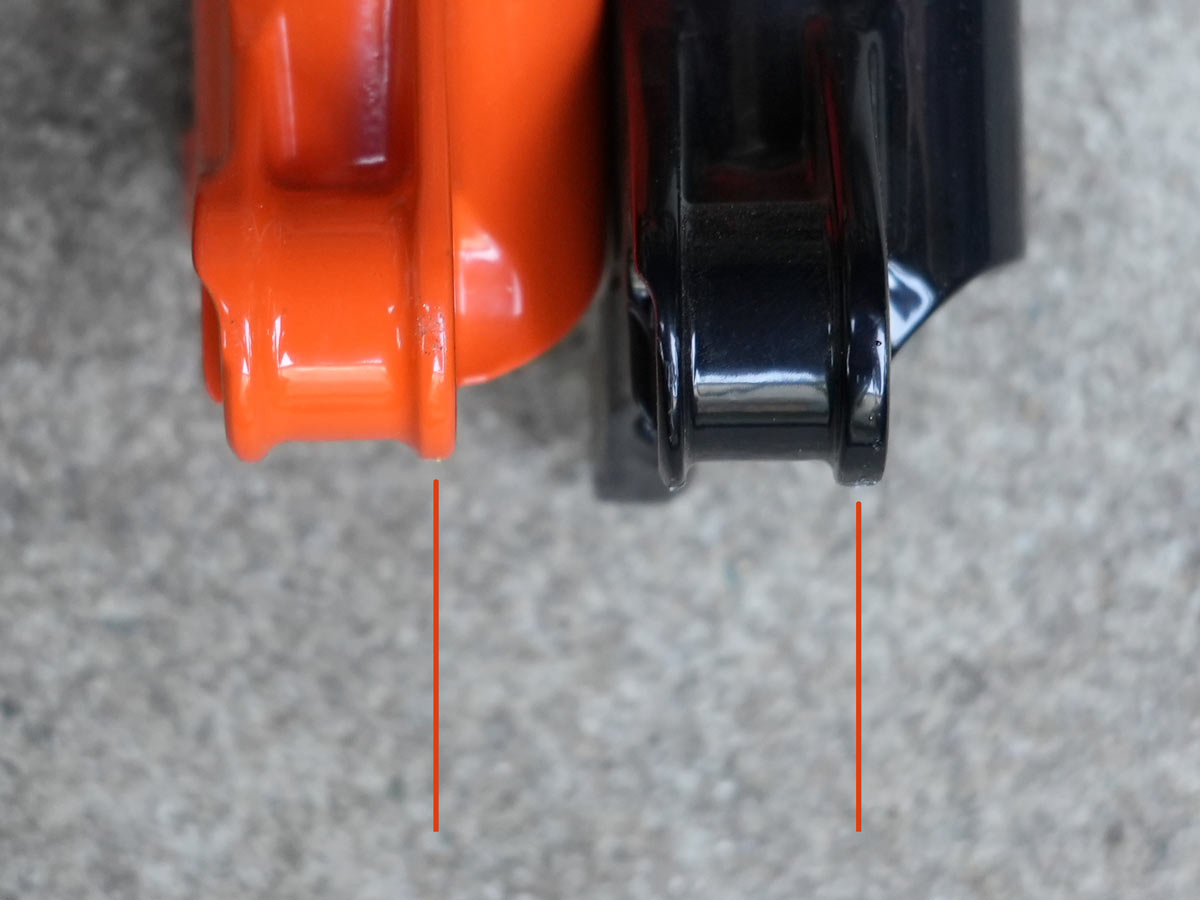 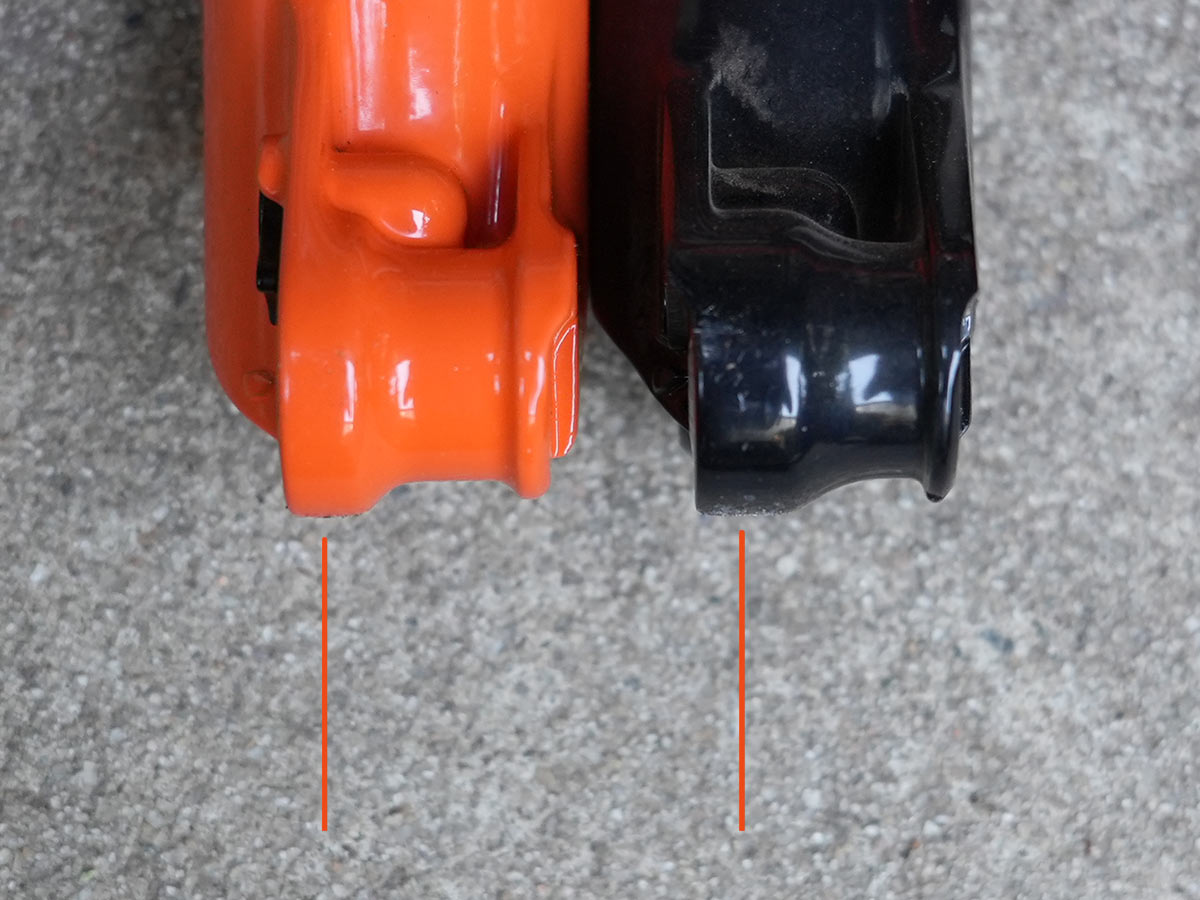 …but the inner edges (not marked) actually appear just a bit thicker.

Side view of the dropouts show a few more differences…but what’s more important here are the differences in the post brake mounts.

The prior MY21 Fox 34 (left) used an adapter to push the caliper out to accommodate a 180mm rotor. The new MY22 34 repositions the post mounts higher, which actually lets them be shorter and straighter, and now you don’t need any adapters to fit a 180mm rotor. This saves more weight than you’d think…scroll on. 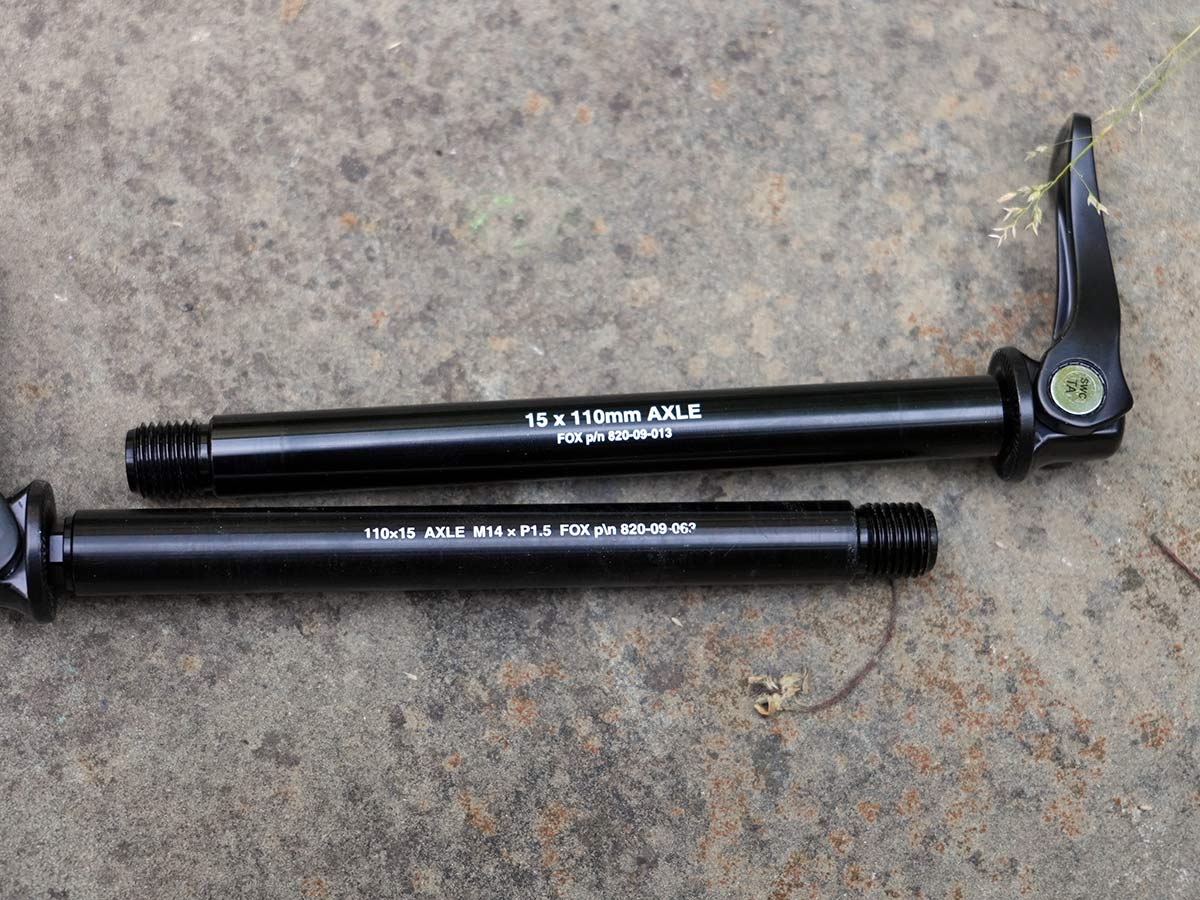 Here’s where things get a little tricky. Fox’s QR Thru Axles used to be lighter. But then they simplified them, and they got heavier.

You can tell the “new” ones because they have an allen key accessible on the end of it, otherwise, they look very similar…but the weight difference is dramatic, as you’ll soon see. 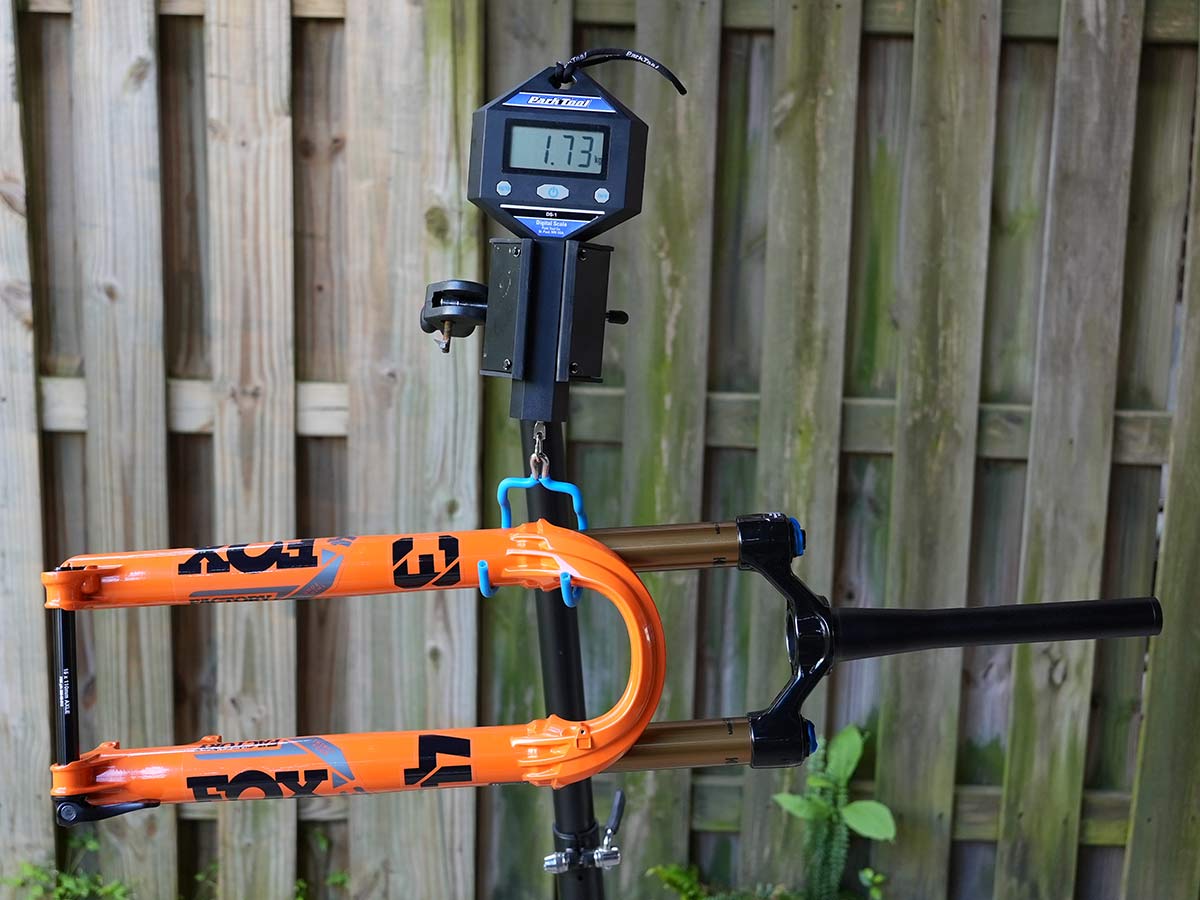 The MY22 Fox 34 with steerer tube cut to 8″ without axle or star nut weighed in at 1,640g. I intentionally left the steerer a bit longer so I could move it between a wider variety of bikes. But I did forget to attach the cable clip, so in the interest of making it fair: 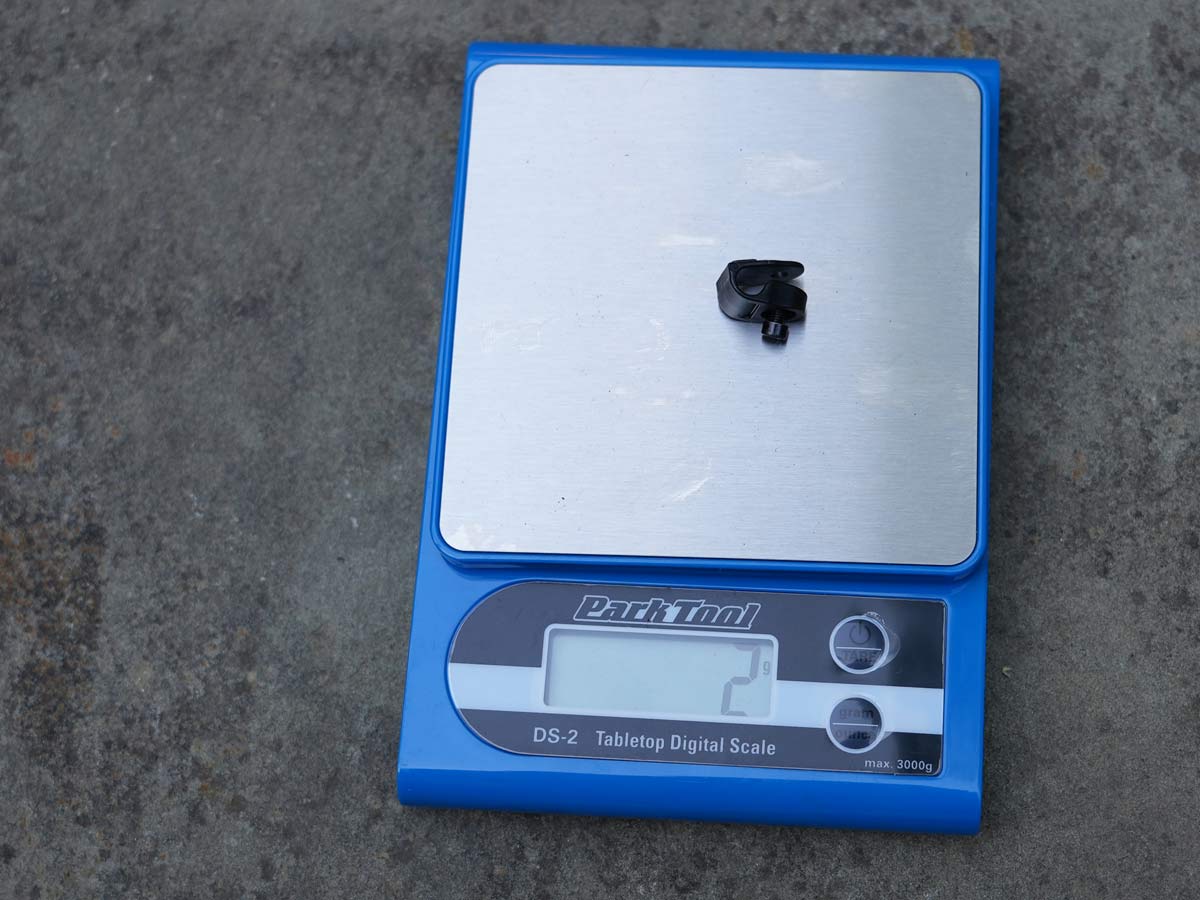 Add two grams to the weight of the new fork.

The difference in axles is dramatic: 76g (original) versus 114g (new). That’s 38g of unsprung weight. (We’re clarifying this with Fox…there’s a chance Factory-level forks will ship with the lighter axle, and we’ll update this post as soon as we have confirmation. But, they have told us that if you want the lightest possible setup, upgrade to the Kabolt. Our test fork came with the lighter axle, we’re just not sure if that’s how they will ship.) 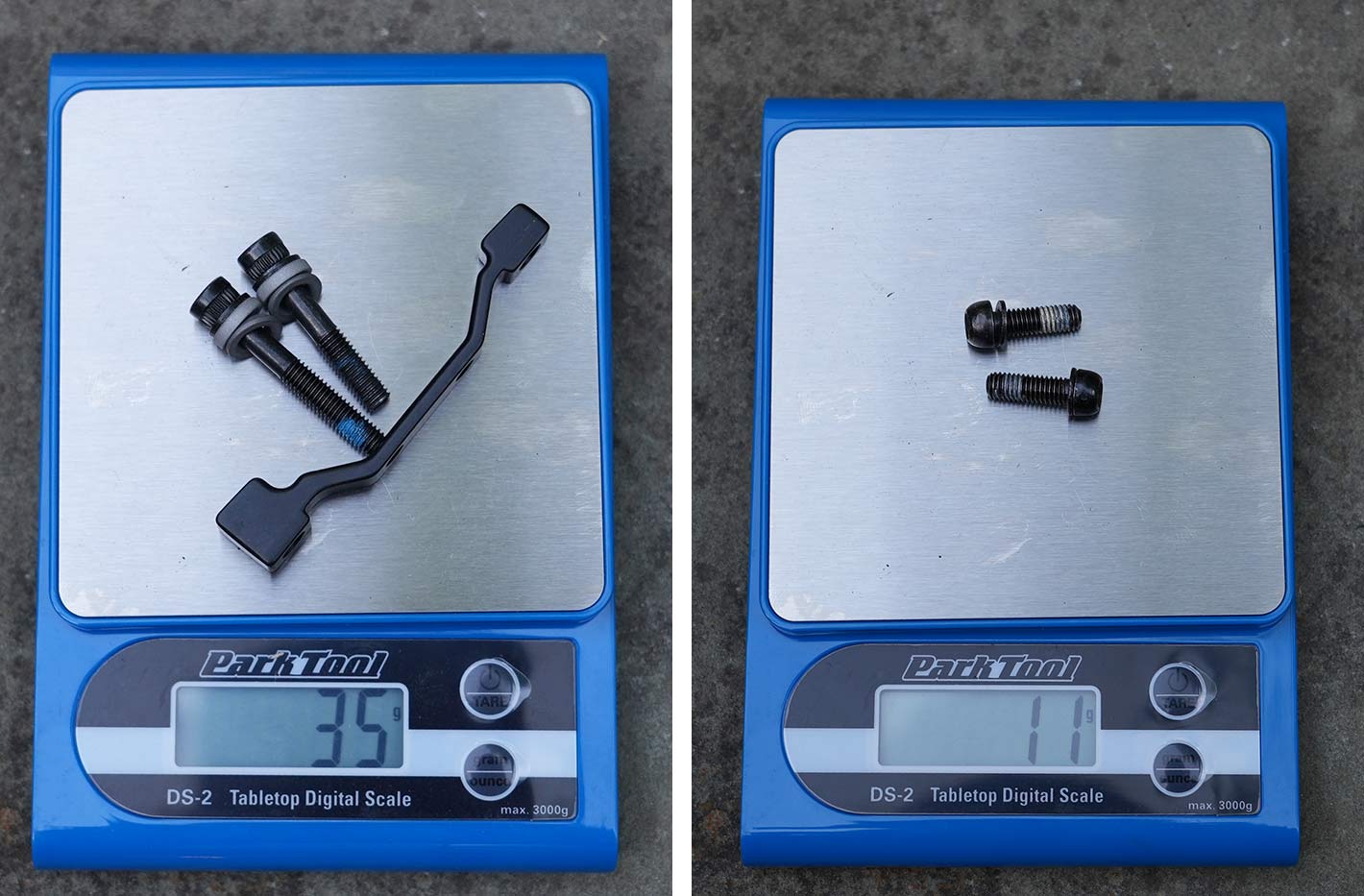 With more (most) trail bikes now spec’ing 180mm front brake rotors, the move to a direct-mount design makes a lot of sense. The lack of adapter and longer screws saves 23g of unsprung weight.

Add it up and there’s a big difference:

That’s a 240g (0.53lb) difference, which is huge. Opt for the GRIP2 damper and add 75g, that’s still a 165g (0.36lb) drop. With most of that weight savings coming low on the fork, and being unsprung mass, it should help improve performance. Swapping to the KaBolt thru axle will drop another ~40g.

Thanks Tyler, appreciate the thorough comparison.

Wringing hands over unsprung weight on a 25 lb +/- bicycle that is primarily ” sprung” by your arms and legs is ridiculous.

Isn’t it actually a reduction of weight of the subsystem that is made up of the fork lowers, brake caliper, rotor, wheel and tire. Not the entire bike.

Who cares! If you’re getting GRIP2, you have higher priorities than a minuscule weight difference. Namely, outright better damping performance. Time weighing your parts could be better spent using them….

Time reading and commenting about the weight of parts could be better spent using them too.

(And btw, weighing parts takes even less time than reading about or commenting on them. Now go ride your bike.)

Now, if Fox could just figure out what way they want to go with the 2-Pos lock (PTU or PTL)….being as I can not seem to get decent answers from Fox…may end up just going to RockShox (who at least have the same direction for front and rear).

Installed 2022 Factory grip 2 140 mm travel on my 2017 Fuel EX, changed to 44mm offset. Dampening is amazing and 44mm offset made made bike respond quicker on tight trails in my area.
Saved over 1 pound over stock fork.( Rhythm)

What was the weight of your new 2022 34? Thinking of getting the same one but want to know how much I will save over my 36. Thanks!

I like this sort of stuff.
Comparing the ’22 34 vs. the ’22 SC 34 what’s the weight difference and more importantly the rigidity difference between the 2 products?
Thanks!