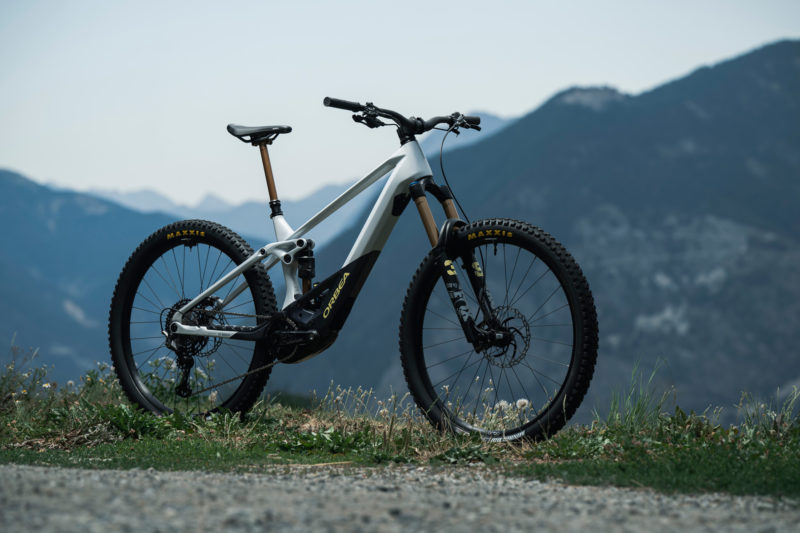 The 2023 Orbea Wild is a complete overhaul of its Wild-FS predecessor, with a new geometry packaging an integrated battery solution resulting in a vastly lighter, and vastly stiffer eBike. The Basque Country brand is leaning on its depth of experience designing lightweight frames to shave an astonishing 902g off the frame weight, with complete builds as light as 20.9 kg. It is still “full fat”, though, pairing a 85 Nm Bosch Performance Line CX Motor with a 635 Wh or 750 Wh battery. 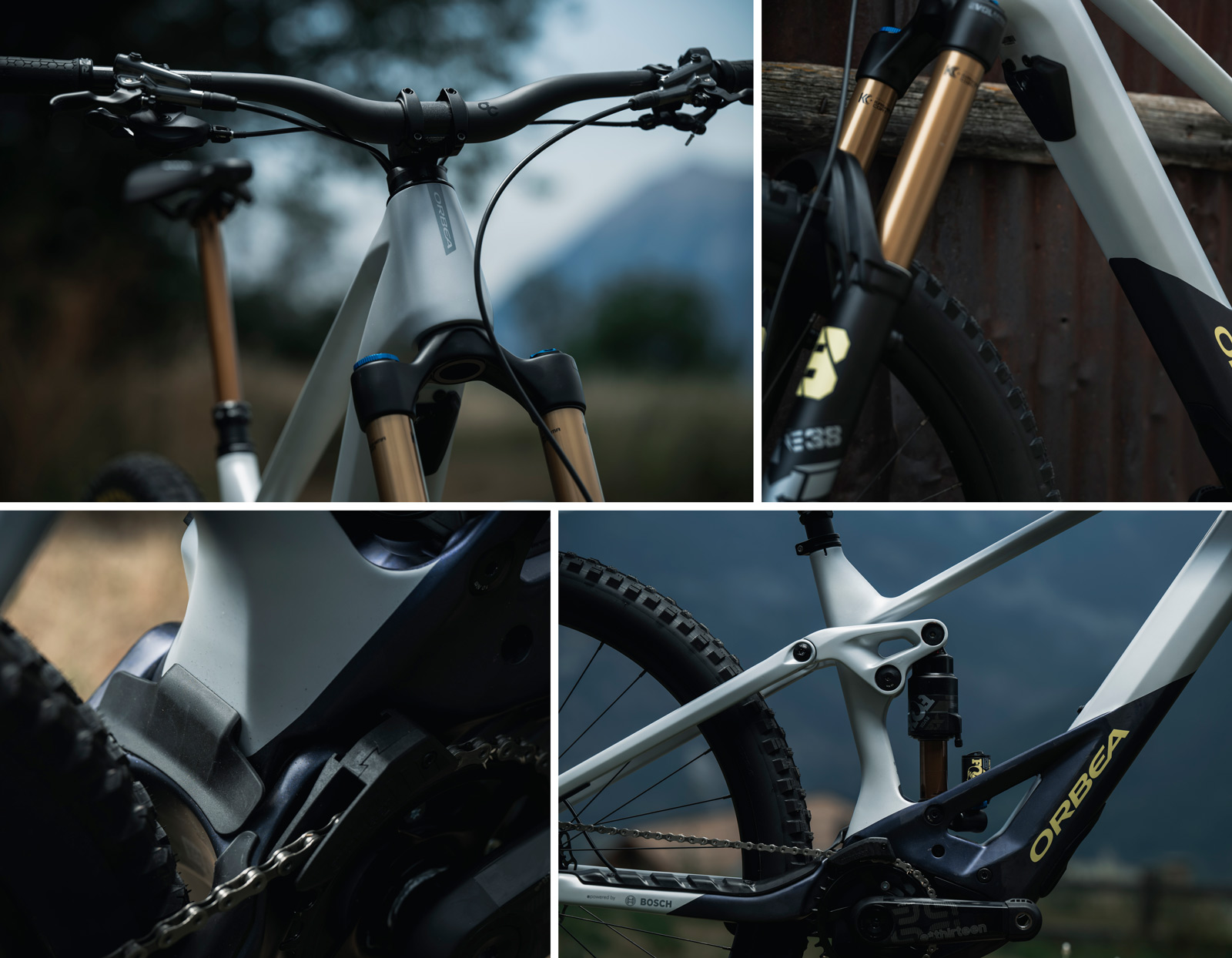 Orbea has placed ride-quality at the heart of the new Wild, prioritizing performance over outright power (though it’s not exactly lacking there, either). We are told the redesign has resulted in a bike that has a ride feel more similar to Orbea’s Rallon enduro bike. A longer reach, shorter chainstays and a slacker head angle are just a few of the noteworthy changes for 2023, and there are now four sizes to choose from. Let’s dig a little deeper on the details. 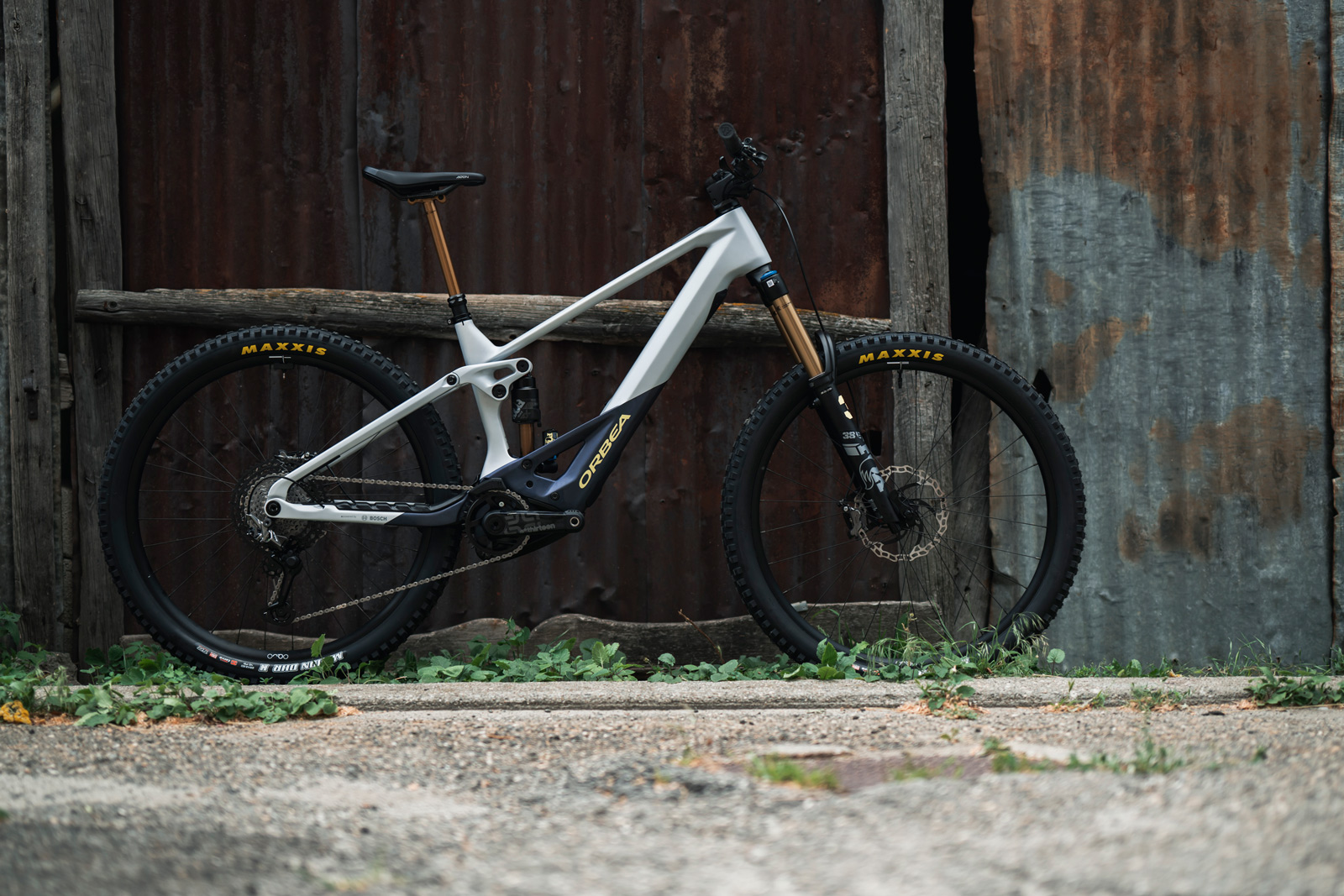 Orbea already has numerous success stories when it comes to eBikes. The Orbea Fox Enduro Team is off the back of a very successful EWS-E season, with Flo Espiñeira taking the Overall Series Title, and Edgar Carballo Gonzalez taking third in the men’s. The brand has proven its ability to produce a winning enduro eMTB, and its ability to produce a lightweight mid-powered eMTB with the very popular 16.2 kg Orbea Rise. Now, Orbea is capitalizing on those wins developing a new enduro eMTB that is significantly lighter and stiffer than its predecessor. 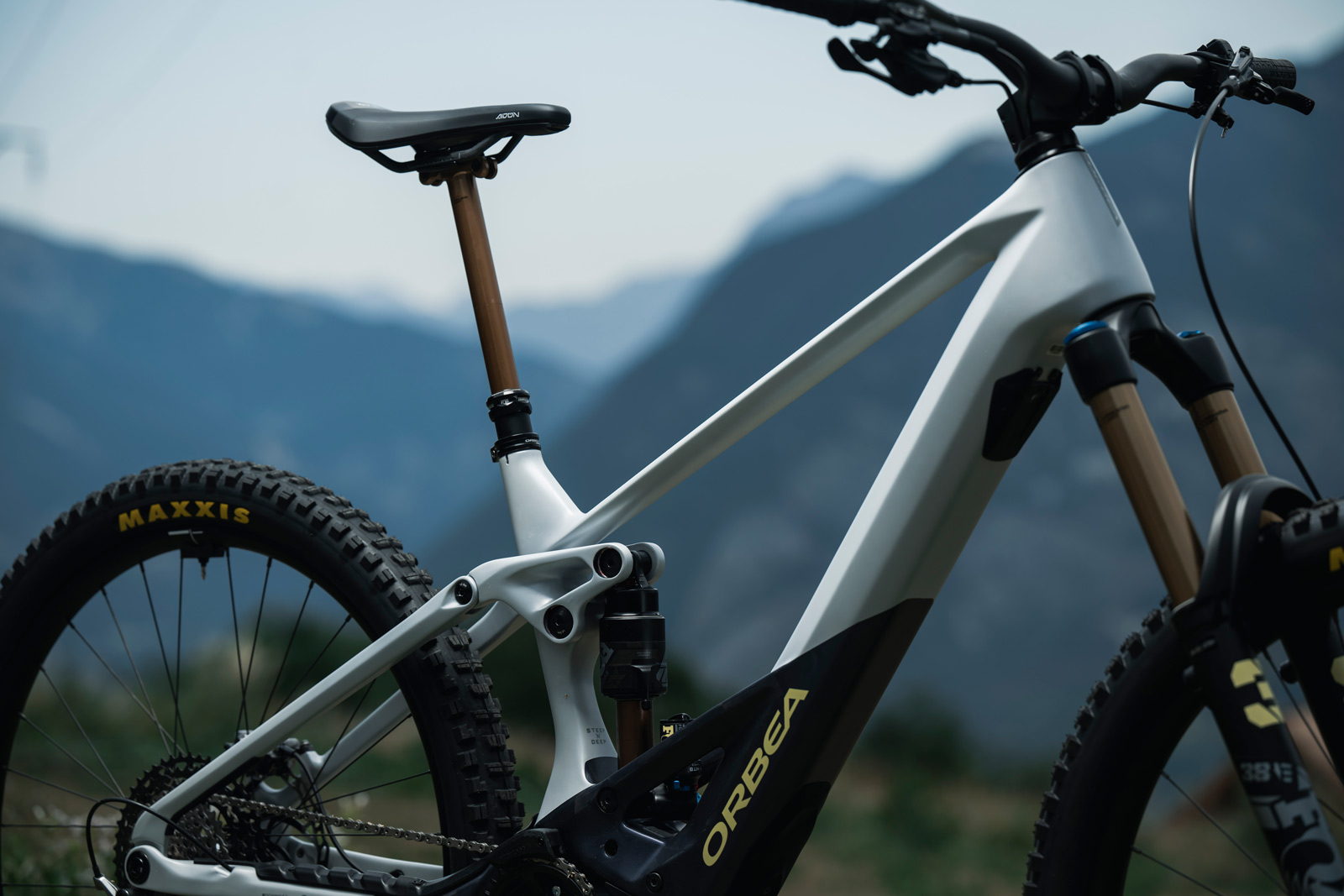 The battery on the previous Wild-FS was removable by virtue of a door underneath the downtube. While that would have been convenient for off-bike charging, it was a compromise for the frame’s stiffness. Here, we see a major update. The 2023 Wild does away with that feature, with a fully integrated battery that isn’t removable. Orbea says this allowed them to make the bike 51% stiffer than the previous Wild-FS and almost 10% stiffer than the Rallon.

Here are the need-to-knows: 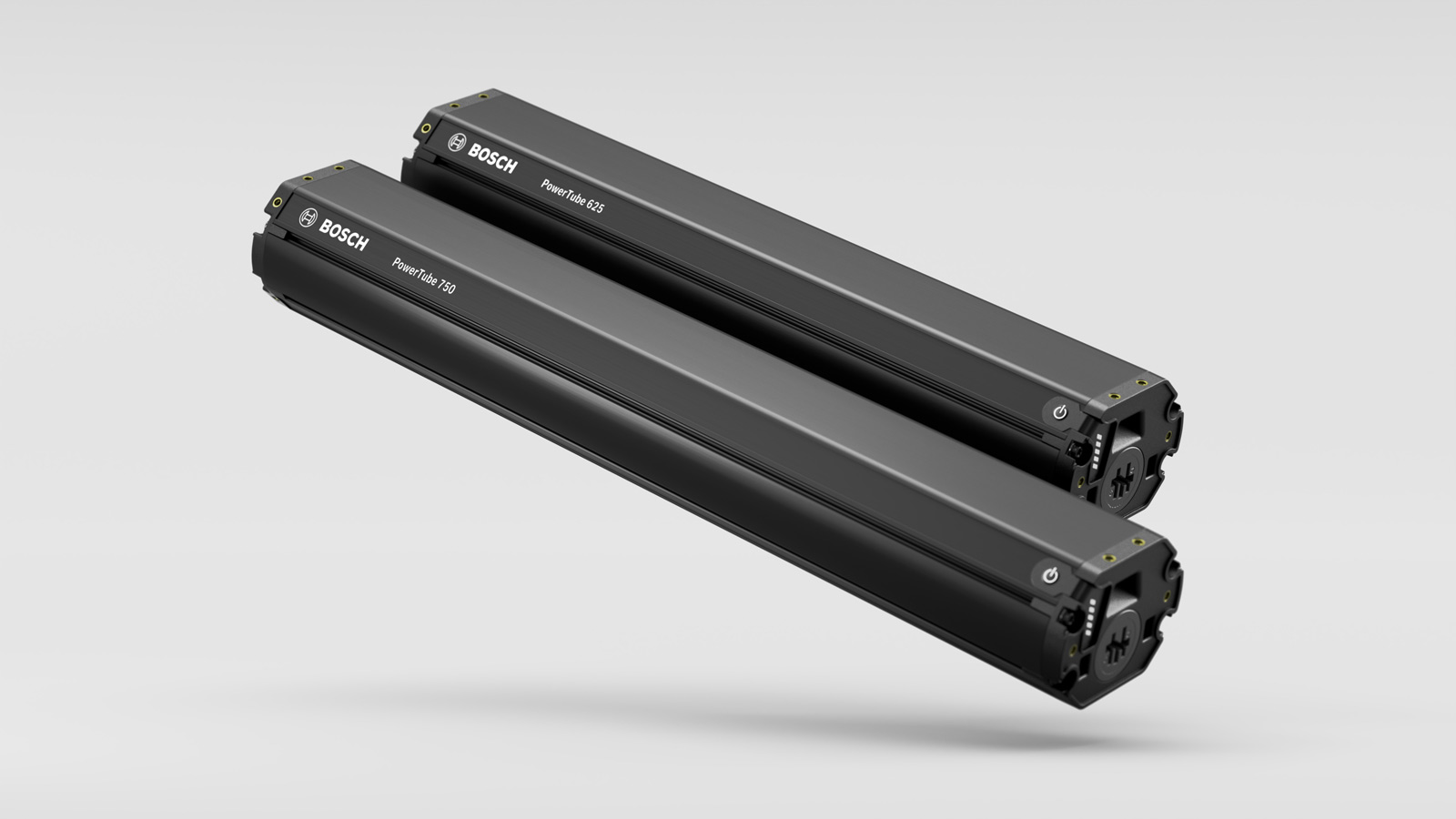 The 2023 Wild is built around the Bosch Smart System. All models except for the top-end M-LTD run the Bosch Performance Line CX Motor; the aforementioned exception gets the new Bosch CX Race Motor which is 200g lighter and offers up to 400% assistance in its exclusive Race Mode. Using Orbea’s MyO customization service, customers can choose between a 625 Wh battery or a 750 Wh option, dependent on whether they value range over ride quality or vice-versa. 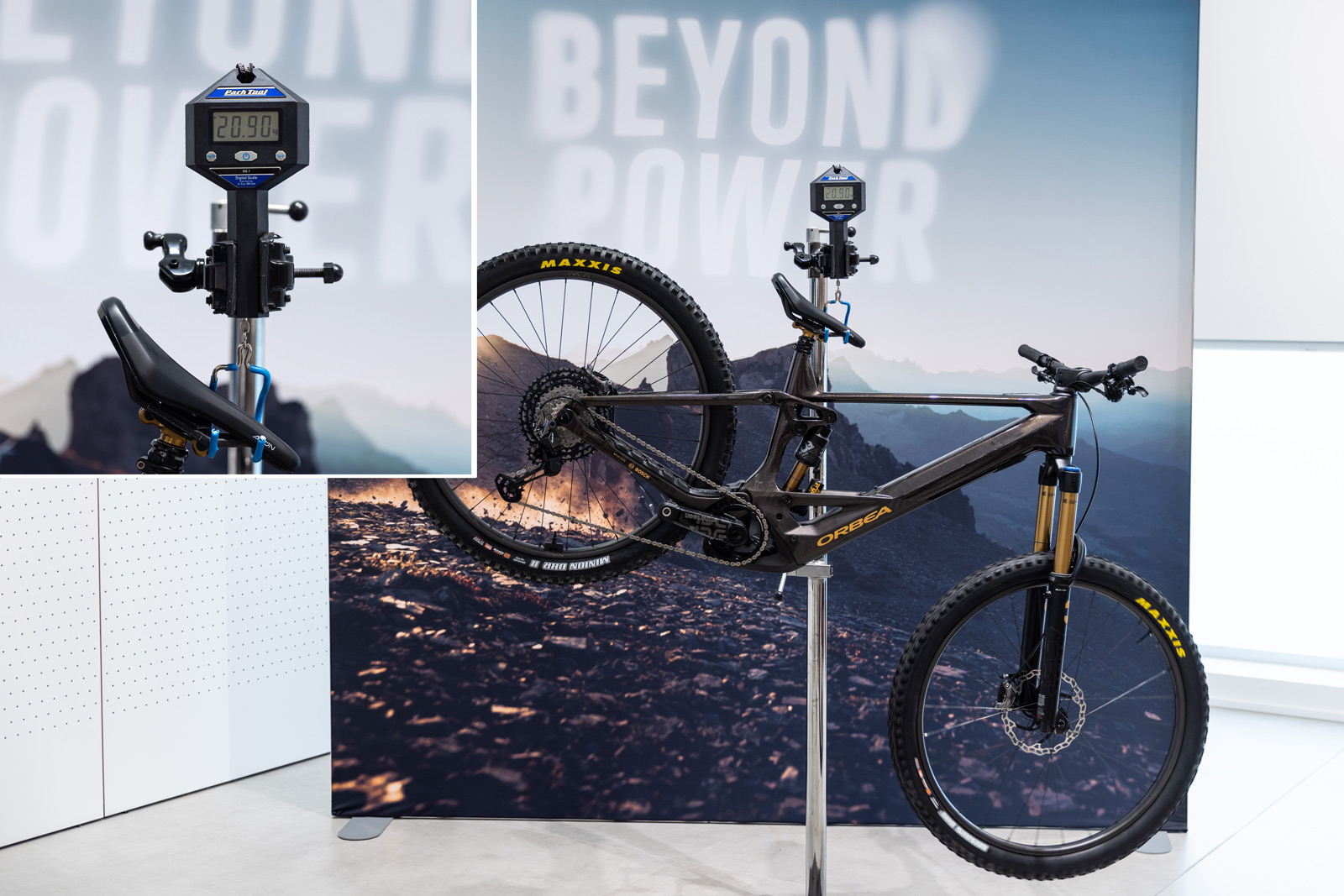 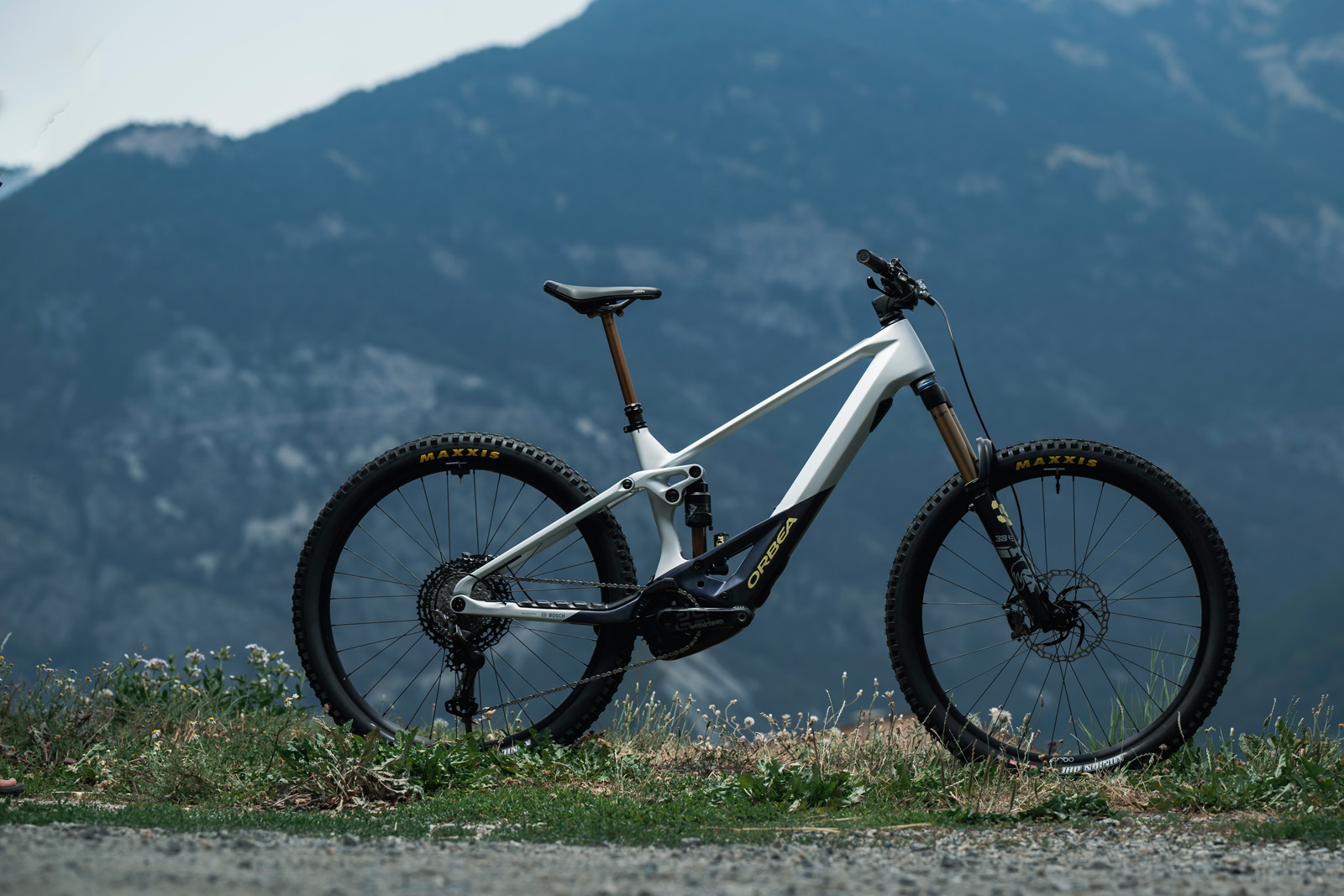 The 2023 Orbea Wild is a dedicated 29er, and its geometry is not adjustable

Orbea’s update to the Wild eMTB is far from incremental. In a size large, the reach grows significantly from 455mm to 480mm, while the chainstays shorten to 448mm. All four frame sizes get that super short rear-center length (for a 29″ eMTB).

The headtube length grows to 130mm delivering a stack height of 639mm. The BB goes higher by 5mm, resulting in a 25mm drop. Overall, the bike is significantly longer with a wheelbase of 1277mm in large. 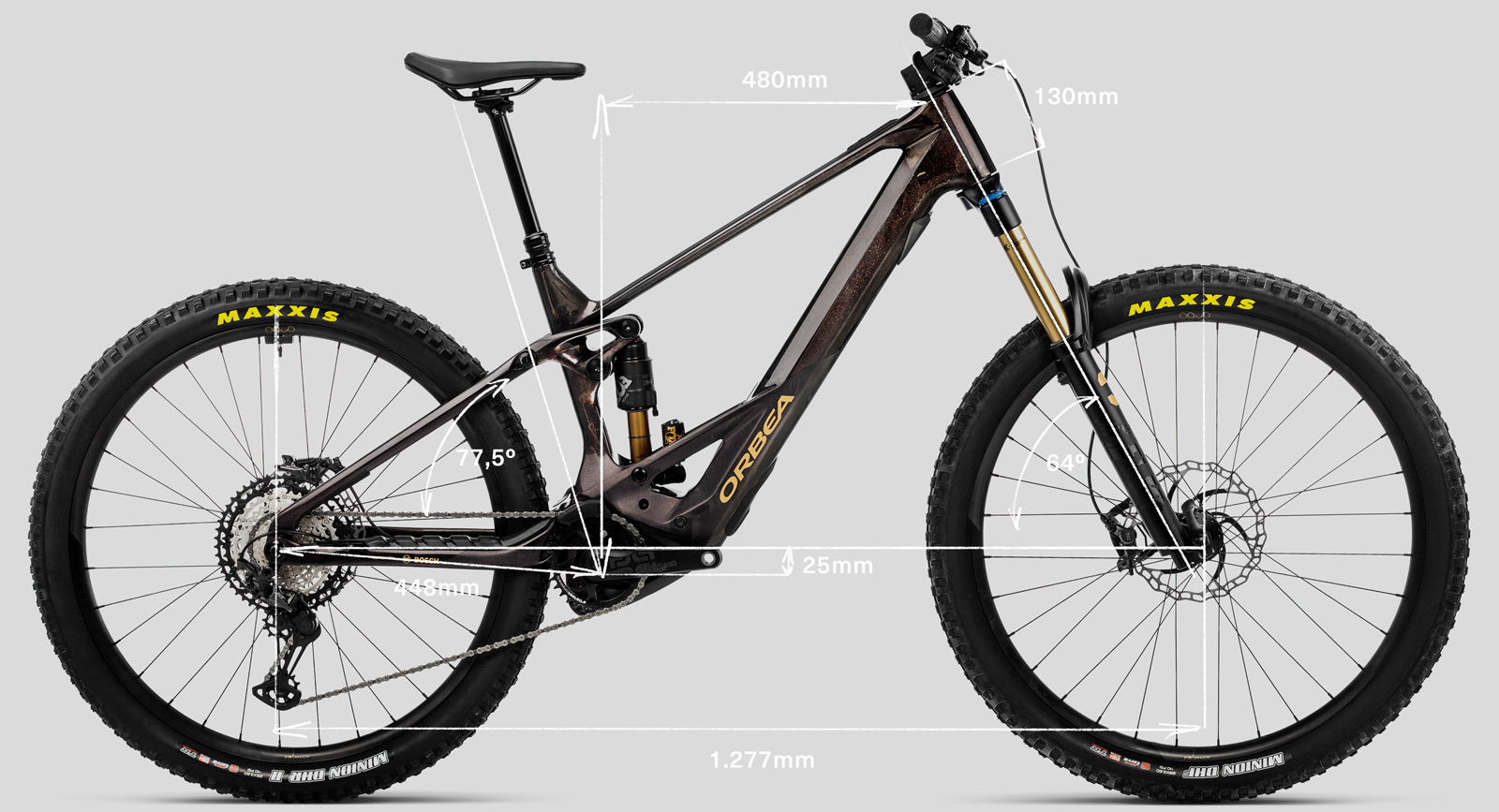 That’s partly thanks to the slacker 64° head angle. The seat tube goes steeper at 77.5°, explaining Orbea’s decision to print “Steep N’ Deep” on the seat tube (just behind the shock), reference to the fact that each frame size offers a seat tube with reasonable insertion depth for the fitment of dropper seat posts.

The geometry of the Wild Carbon and Wild Hydro frames is almost identical; the only difference is seen in the bottom bracket height which is 3mm lower on the aluminum frames. 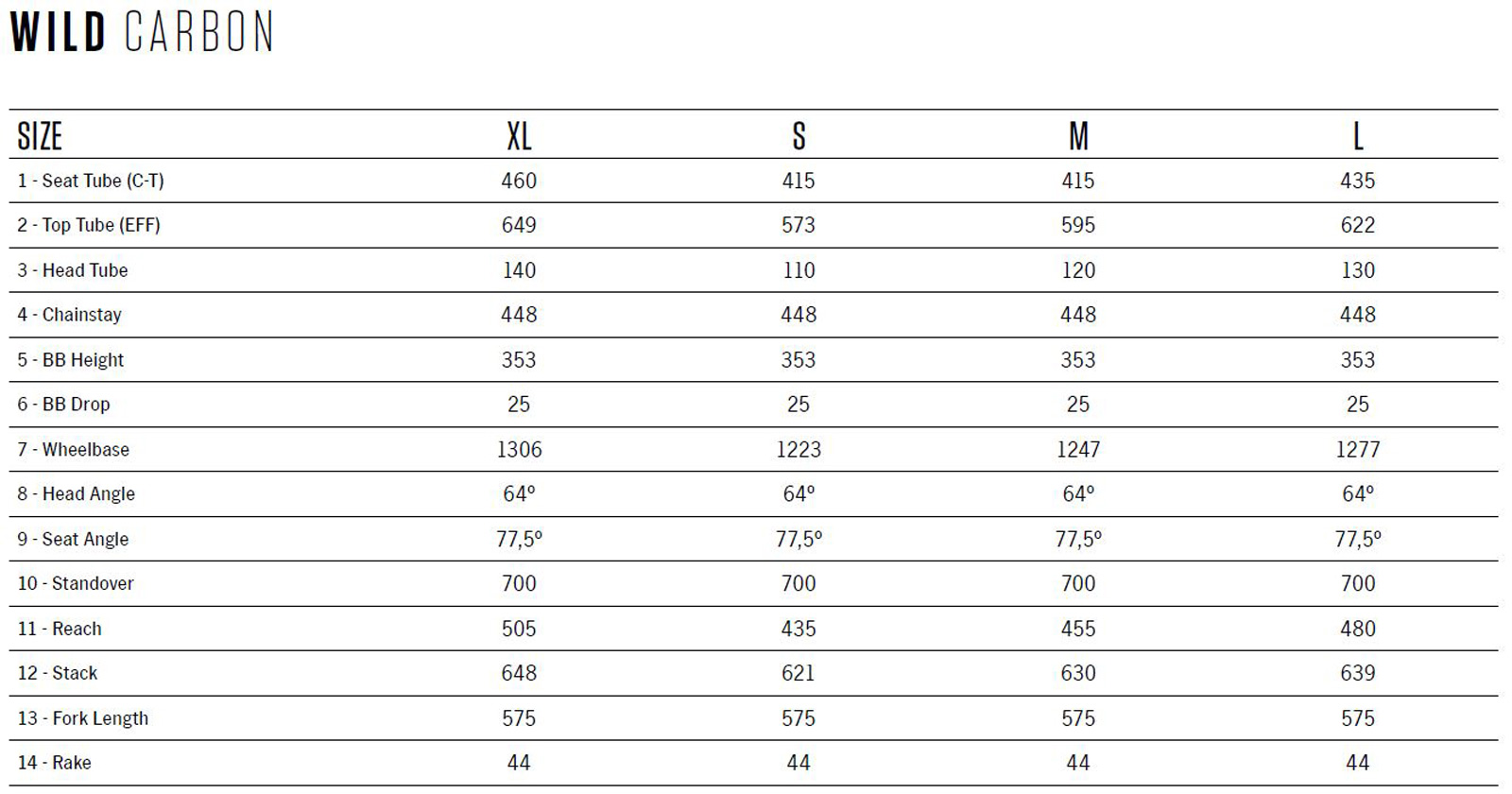 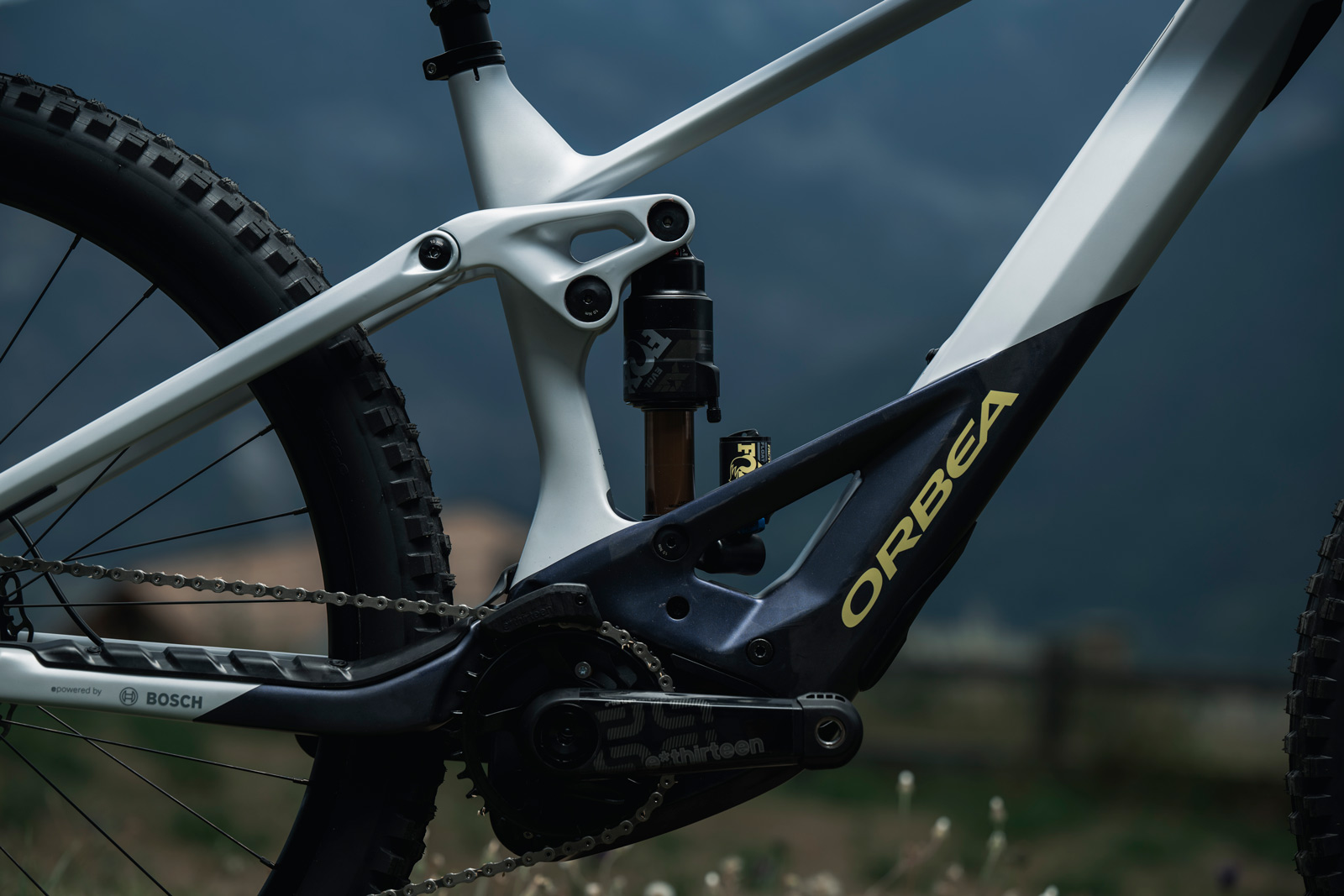 The 2023 Orbea Wild has a four-bar layout; out of sight is the rear pivot that sits concentric to the rear axle

For 2023, Orbea is sticking with a four-bar suspension linkage to deliver 160mm of rear wheel travel, with the rear pivot concentric to the rear axle in a bid to dissociate braking forces from suspension movement. The linkage is tweaked as compared to that on the previous Wild-FS, primarily to increase mid-stroke support and end-stroke progression. All seven models released today are spec’d with air shocks, though Orbea say the bike is sufficiently progressive to work well with coil shocks too. 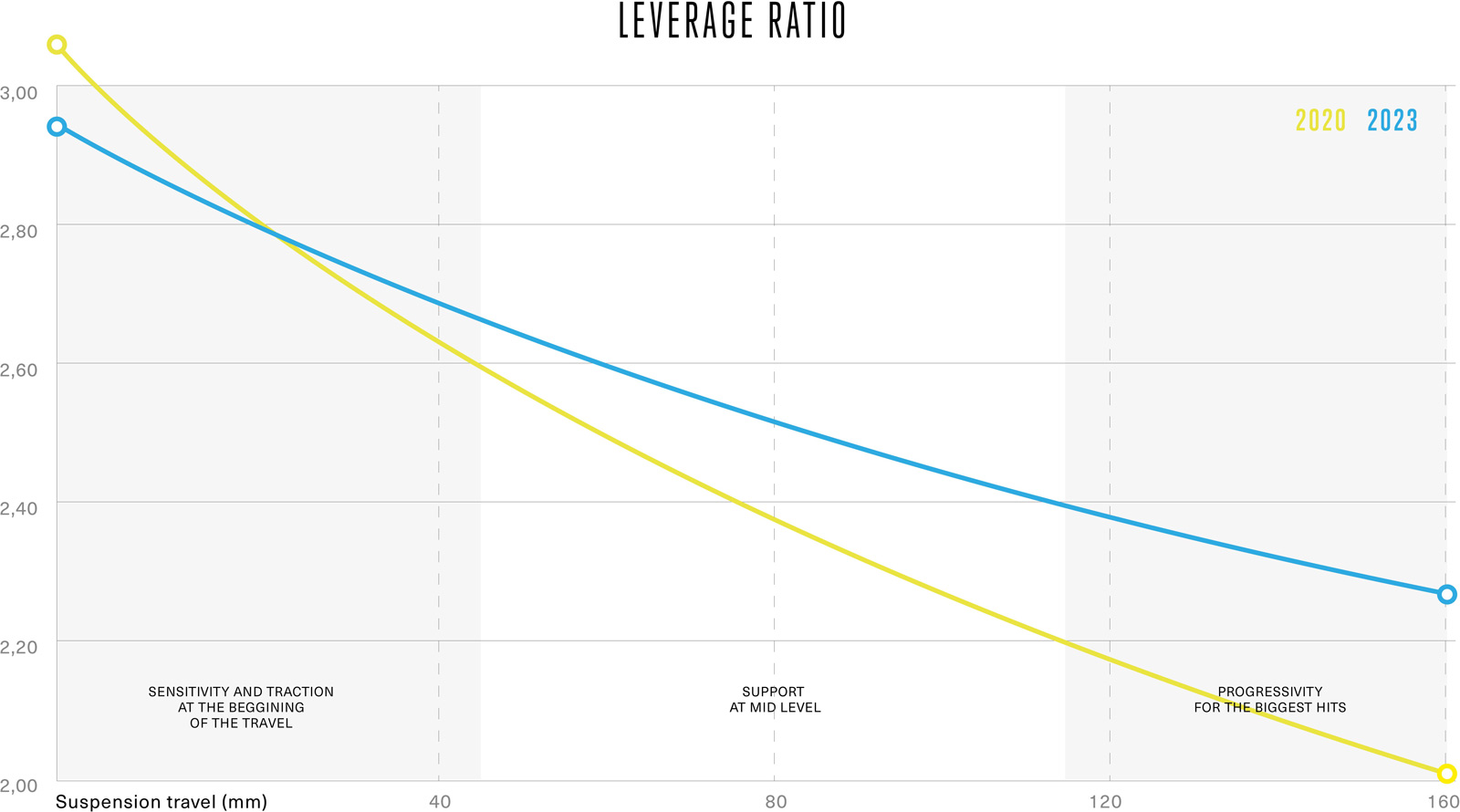 The Wild’s anti-rise values are also a fair bit higher than those seen on the previous Wild-FS, indicating that the bike’s suspension should be a little more active under braking.

Anti-rise and anti-squat characteristics of the 2023 Orbea Wild versus the 2021 Wild-FS. Click image to enlarge.

Just as we saw on the recently launched Orbea Oiz XC Bike, the brand has taken the decision to route cables through the headset using their new SIC System developed in conjunction with Acros. It’s not a fully-integrated job, in that the cables enter the assembly underneath the stem where they are routed through a custom-designed headset spacer. Cables and hoses will need to be cut and the rear brake re-bled only when it comes to changing the headset bearings. To help space out intervals between swaps, Orbea opted to use a stainless steel upper headset bearing. 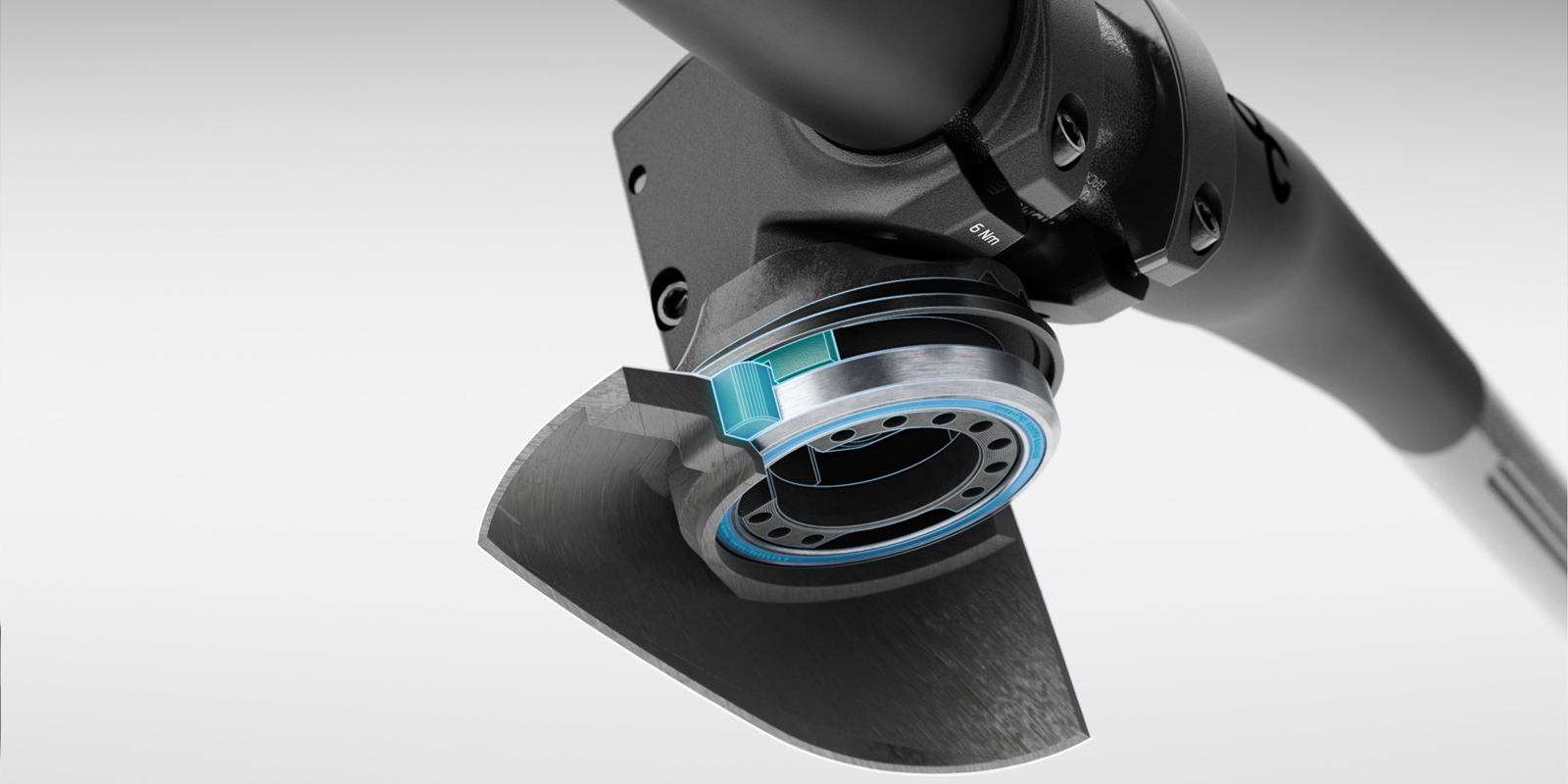 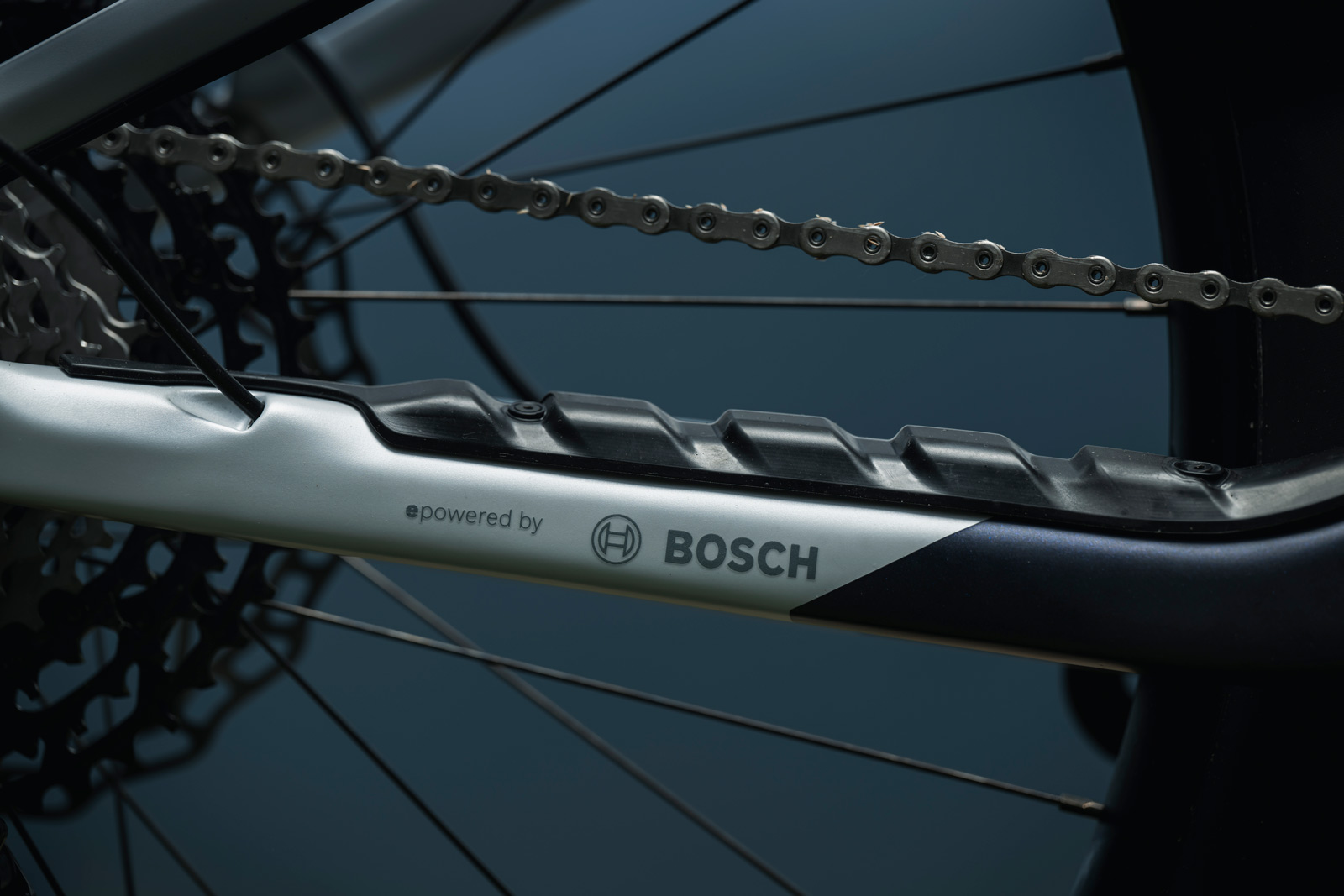 … and a mud-flap at the back of the seat tube that serves to stop stones getting trapped in the gap. 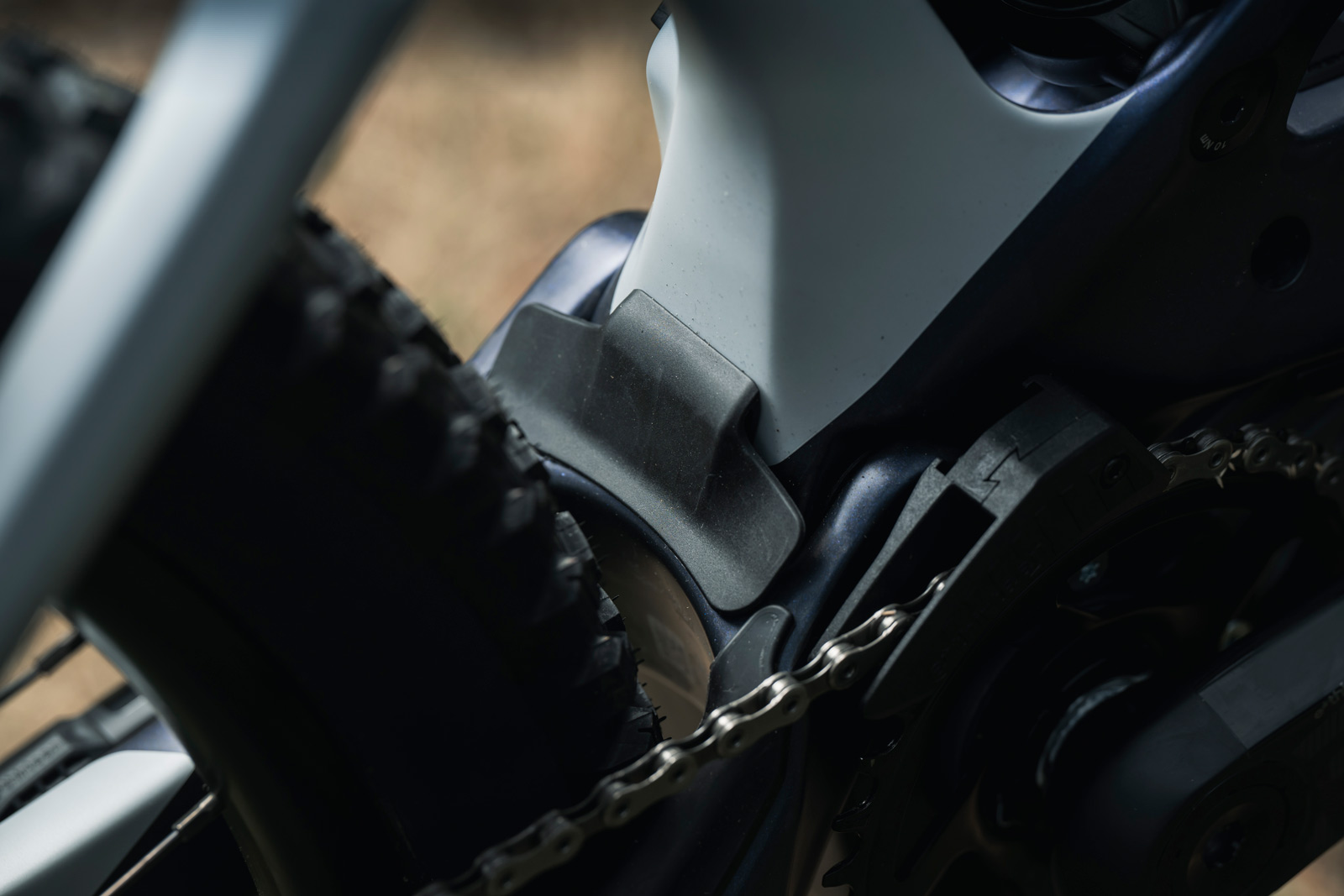 The 2023 Orbea Wild is available in seven models, four of which boast a carbon frame, and three of which have a hydroformed aluminum frame. All get dropper seat posts, 160mm cranks, and a set of Maxxis Tires in the form of a Minion DHF 2.6″ Maxx Terra EXO+on the front and a Minion DHRII 2.6″ Maxx Terra EXO+ on the rear. Using the MyO Customization Platform, there is the option to upgrade may of the components on each build, including those tires to a 2.5″ Maxxis Assegai and 2.4″ Minion DHR II Combo. 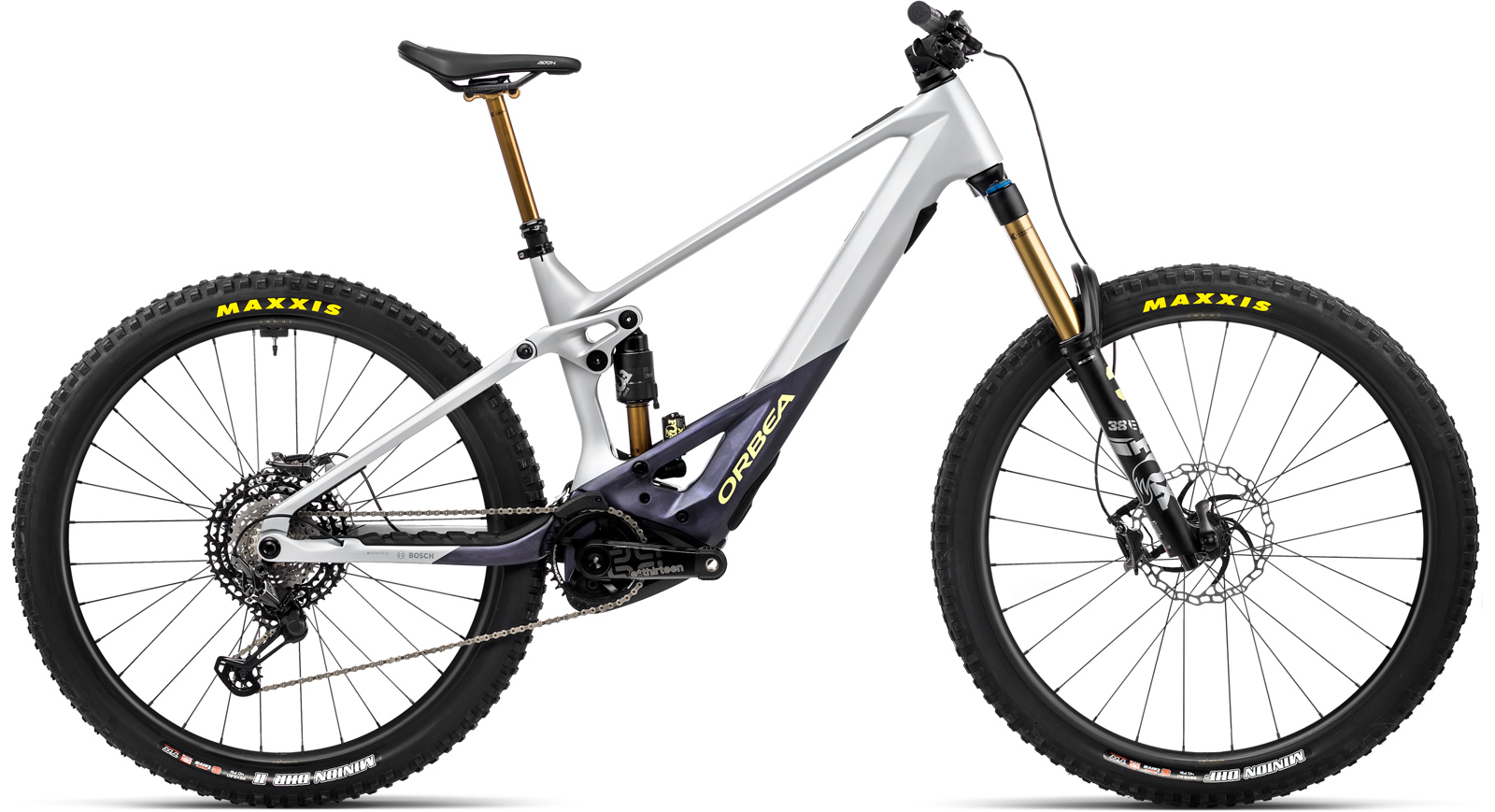 Topping the range is the Orbea Wild M-LTD, retailing at $11,999 USD. It is the only one to get the Bosch Performance Line CX Race Motor, and it packs the smaller 625Wh battery inside its downtube. It sports Fox Factory Suspension Components in the form of the 170mm travel 38 Fork with GRIP2 Damper and the X2 Shock, both Kashima Coated. It runs a Shimano XTR Drivetrain and Brakes, Oquo Mountain Control MC32 LTD Carbon Wheelset and an OC Components Cockpit with Mountain Control handlebar. 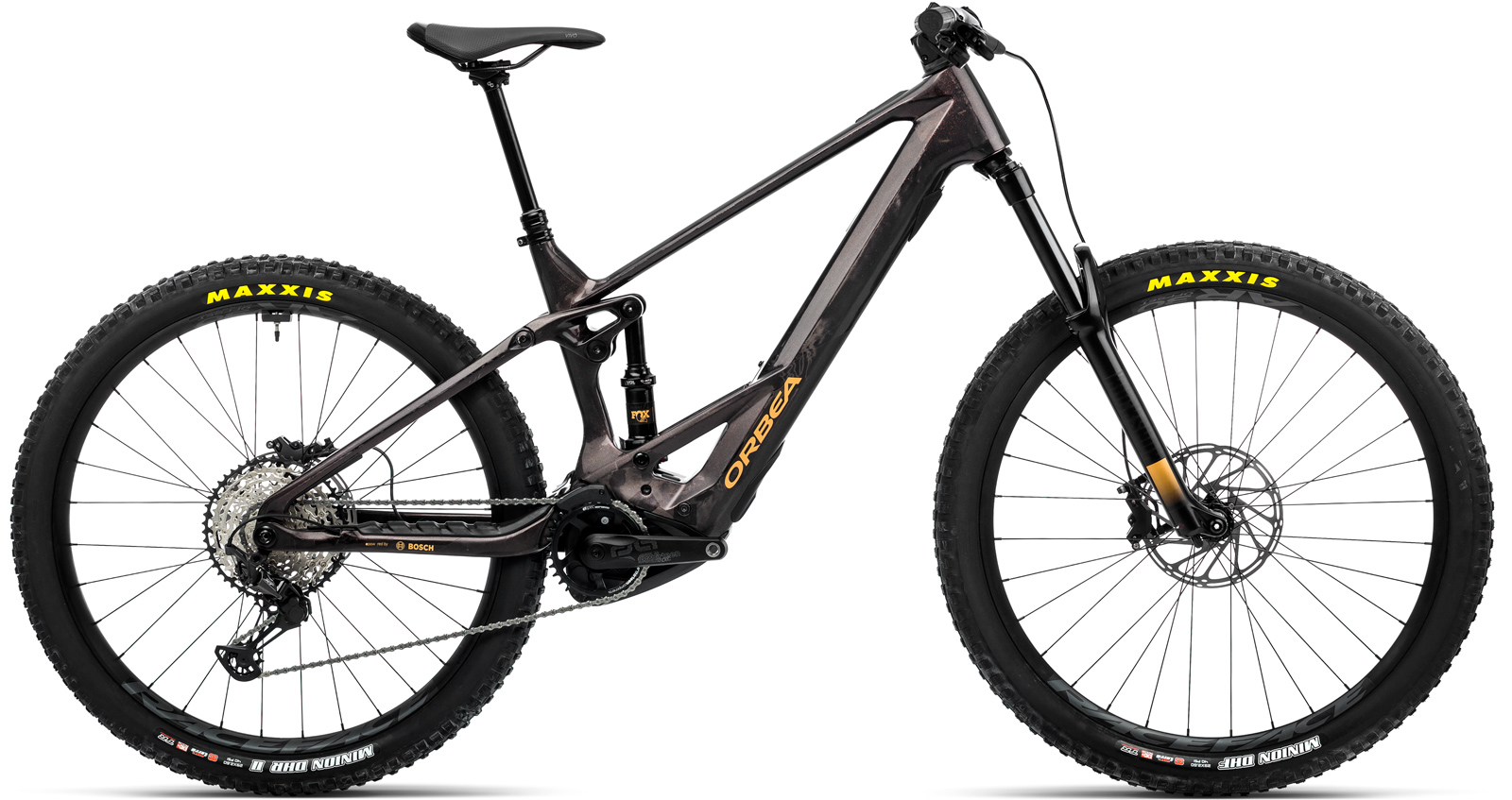 Next up is the Orbea Wild M-Team, a $9,599 USD eMTB with Fox Factory Suspension. It gets the Shimano XT Groupset and Brakes, the Oquo Mountain Control MC32 Aluminum eBike Wheelset, and an OC Components Cockpit with Mountain Control handlebar. 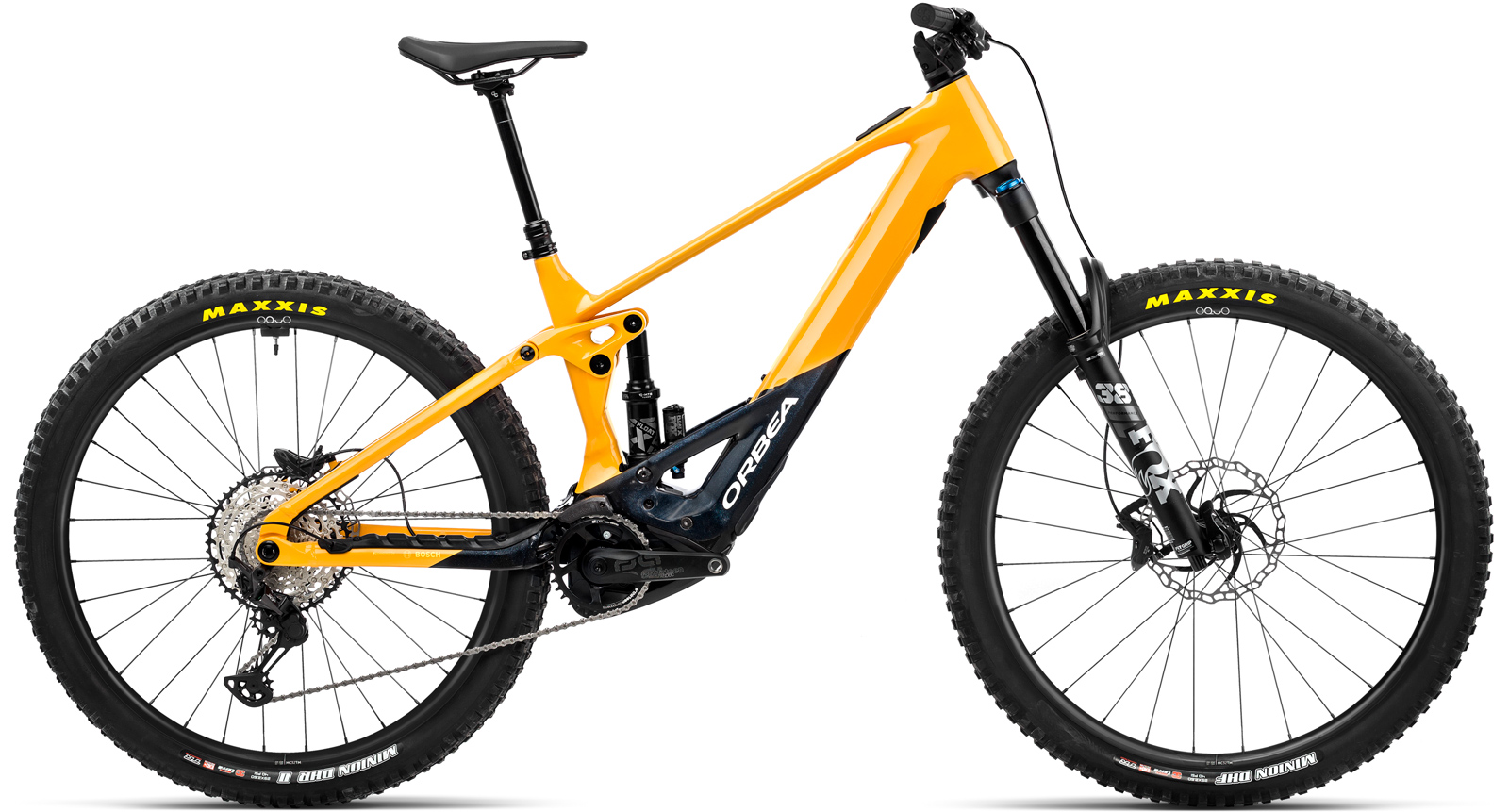 The top-end aluminum build comes in the form of the Orbea Wild H10 retailing at $6,999 USD. This one is kitted out with a Fox Float X Performance Shock, a Fox 38 Float Performance Fork, Shimano XT / Deore drivetrain components, M6120 Brakes and the Oquo Mountain Control MC32 TEAM eBike wheelset. 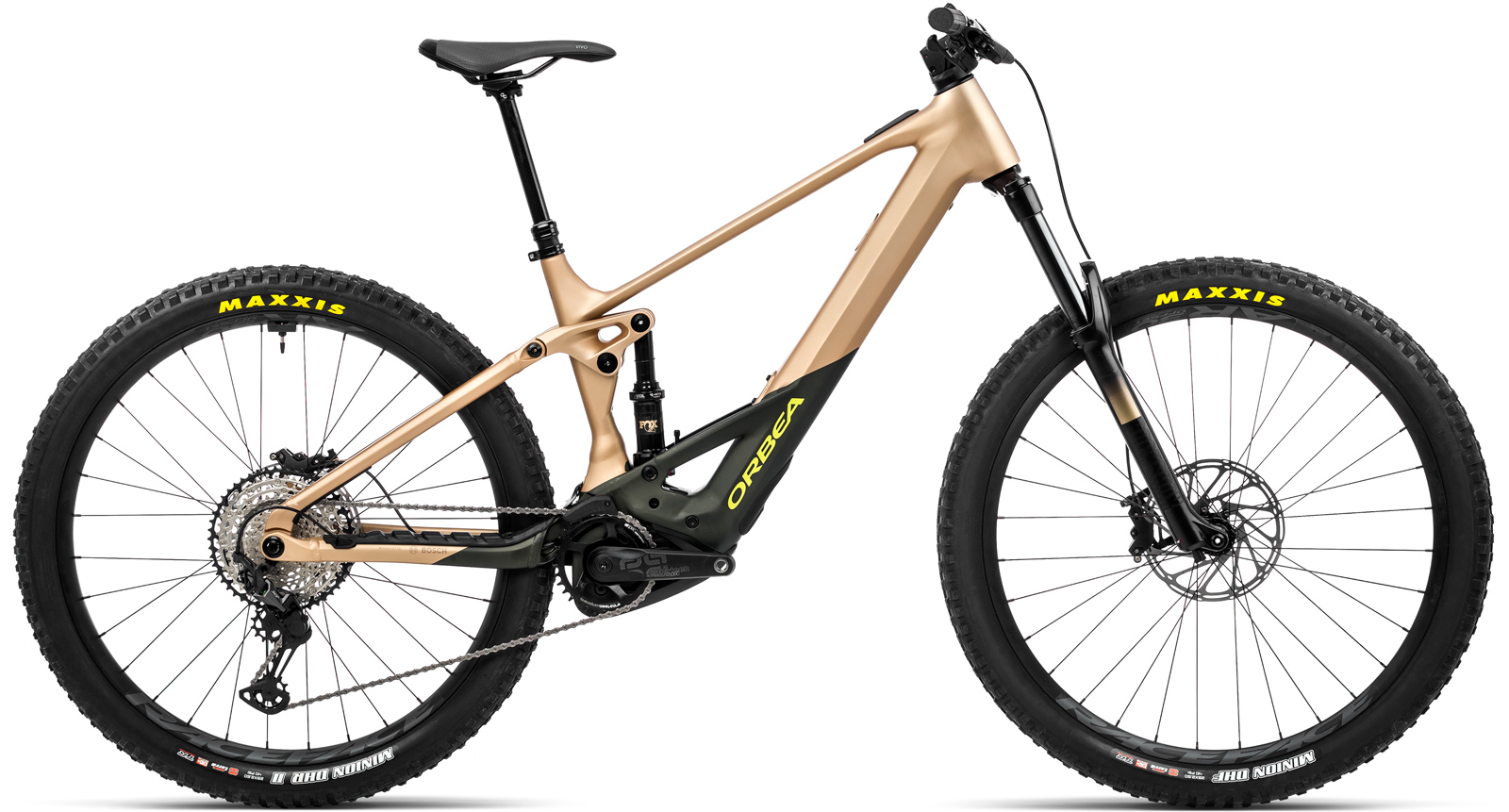 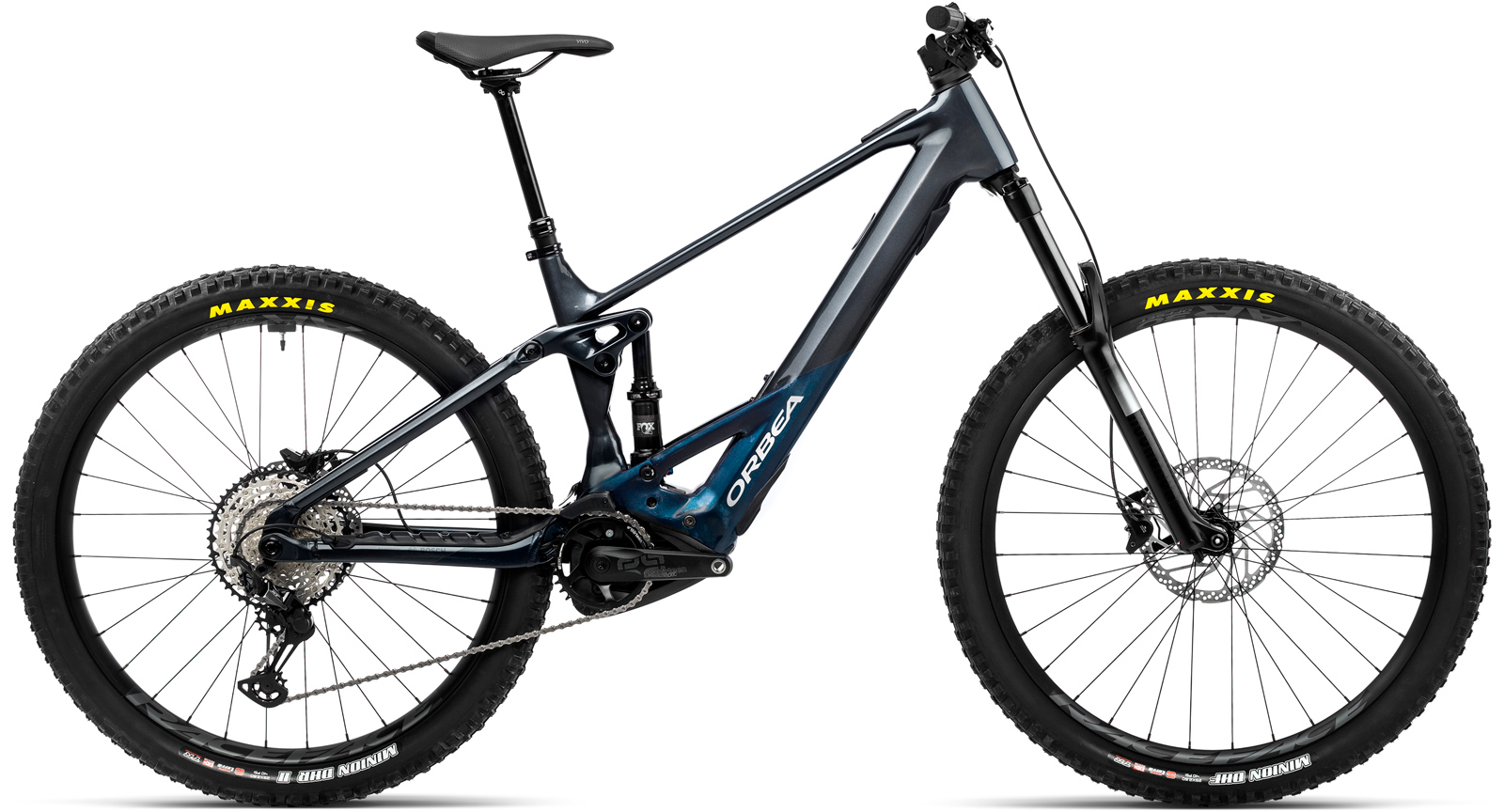 Finally, we come to the entry-level option; the Orbea Wild H30 which will set you back $5,699 USD. That money will fetch you a Fox Float DPS performance Shock, a RockShox 35 Silver Fork, Shimano MT410 Brakes, XT/Deore Drivetrain, and a Race Face AR 30c wheelset. 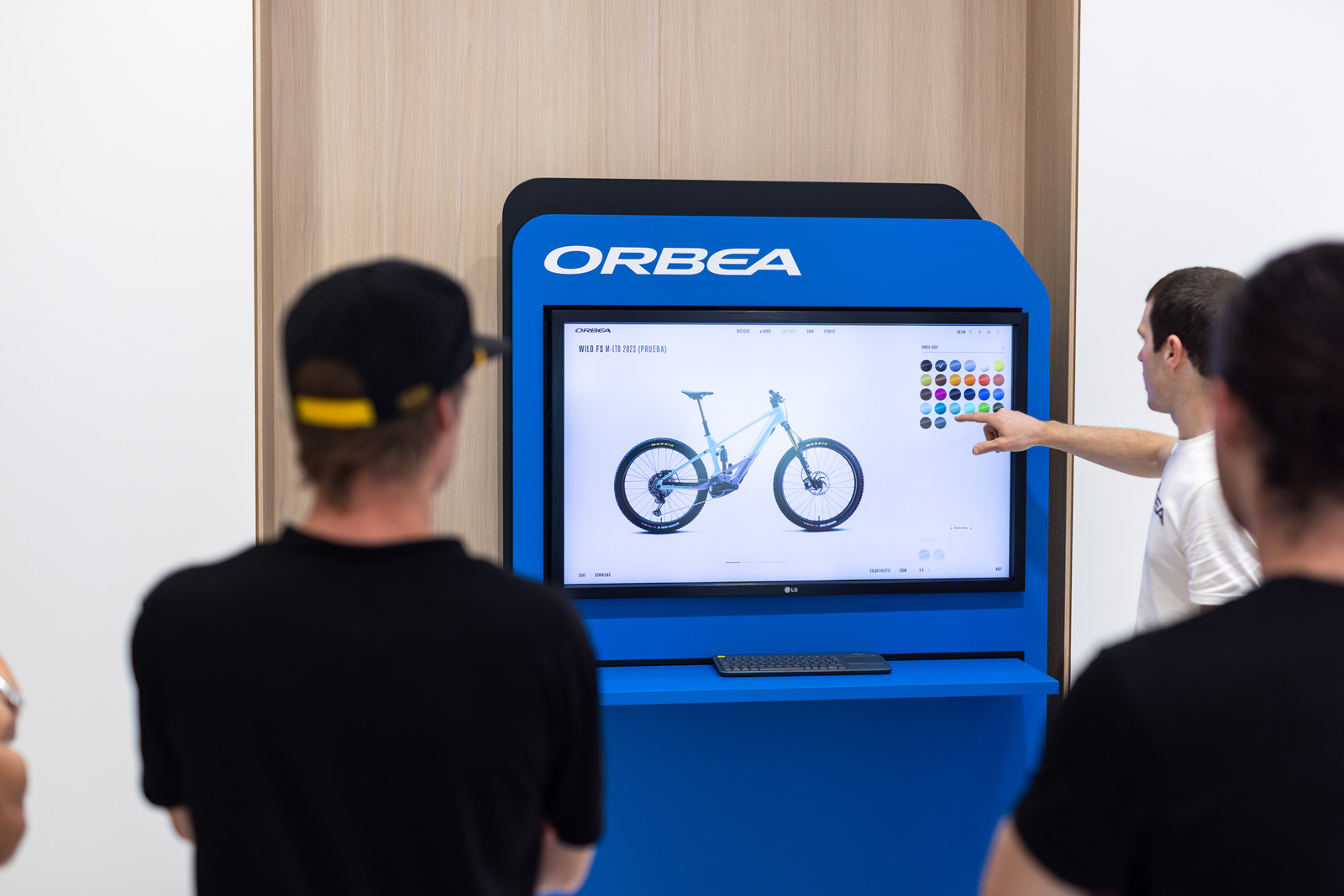 Orbea is offering full customization of all four carbon models of the 2023 Orbea Wild through its MyO programme wherein one can also make spec alterations to create something rather unique. For complete spec lists and colorway options, head to the Orbea Website.

Use Orbea’s Rider Connect Service to find out where your closest Orbea dealer is.

There is nothing unique too the uno about it. A lot of these design touches go way back

Orbea is finally gaining some well deserved traction here in the States. The execution of this new ebike launch is just another good reason why. Well done Orbea!

oranges vs apples, isn’t it?

Nice bikes. They seem to cost about the same as similar, unpowered, Yetis.

Looks good, the non-removable battery is a deal breaker. What a strange decision.