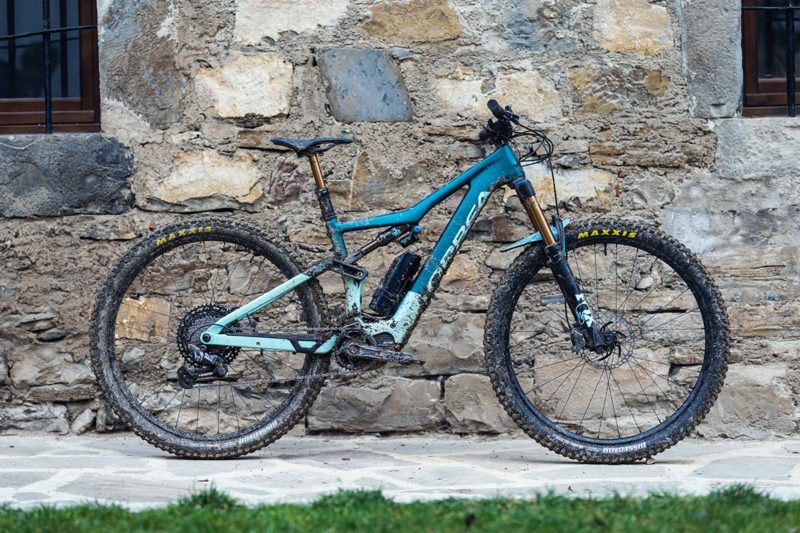 The Orbea Rise is one of the most svelte full suspension mountain bikes we’ve seen yet. Challenging the class-leading numbers of the Specialized Turbo Levo SL, the all-new Rise weighs a claimed 16.2 kg for a medium frame, top-end M-LTD model. That’s with a custom Shimano EP8 motor with a 360 Wh battery. 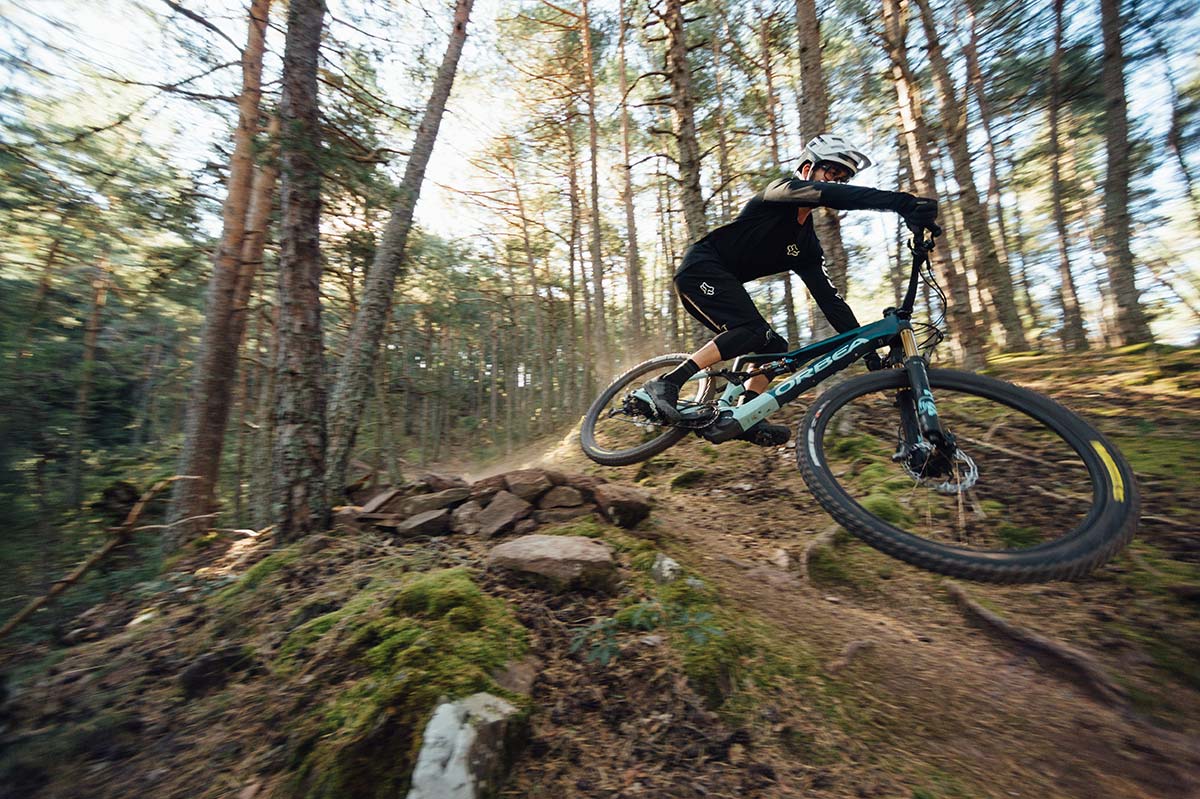 This is not an e-bike designed to deliver maximum power for maximum duration; rather, Orbea aimed to produce a bike that was “less e and more bike” – a bike that naturally rides like a traditional full suss but with a little assistance to turn your big trail rides into epic ones.

The Orbea Rise was given the same ultralight frame construction as the Occam trail bike and Rallon enduro bike. That makes it one of the lightest eMTB frames on the market with 2.3 kg of OMR carbon. 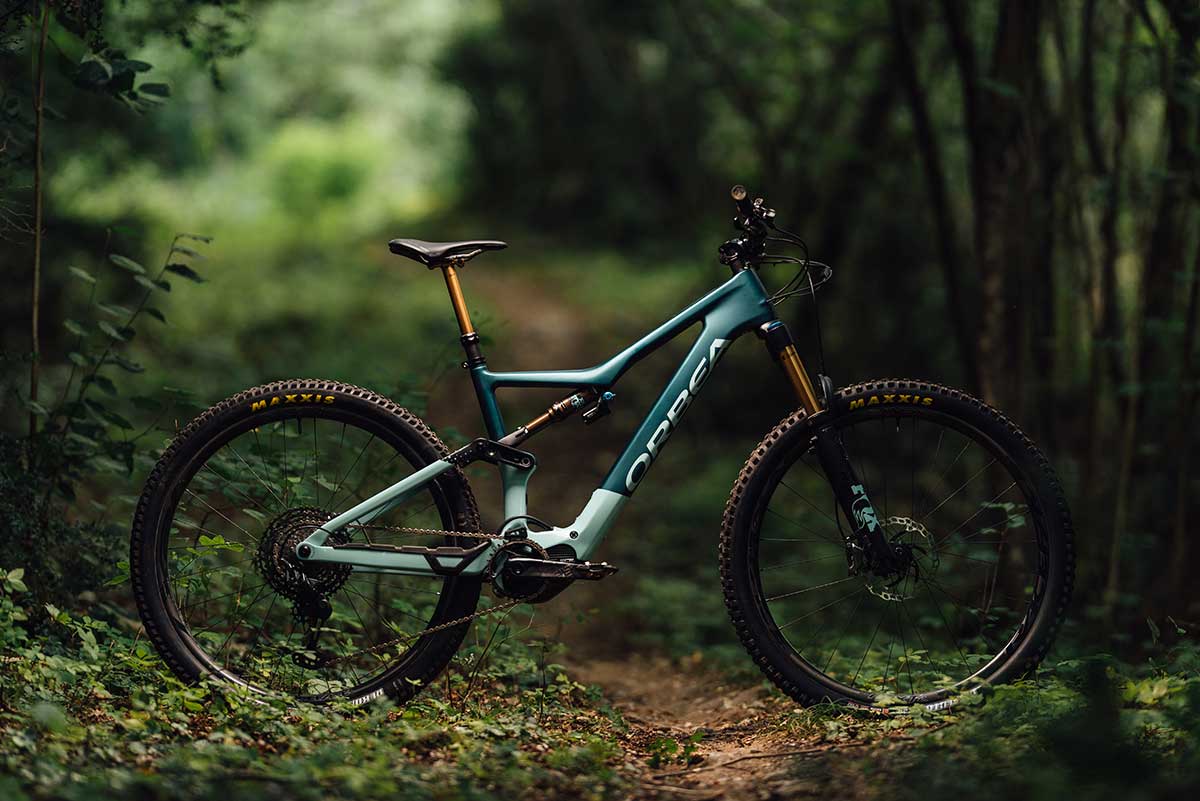 The Rise is a 150mm/140mm travel full suspension 29er e-MTB and… it’s not ugly. Big deal, I hear you say. Well, most brands fail on that last point. But, Orbea have successfully created a compact and functional shred-worthy e-bike that doesn’t look like it’s mistaken a packet of growth hormone for its morning vitamins. 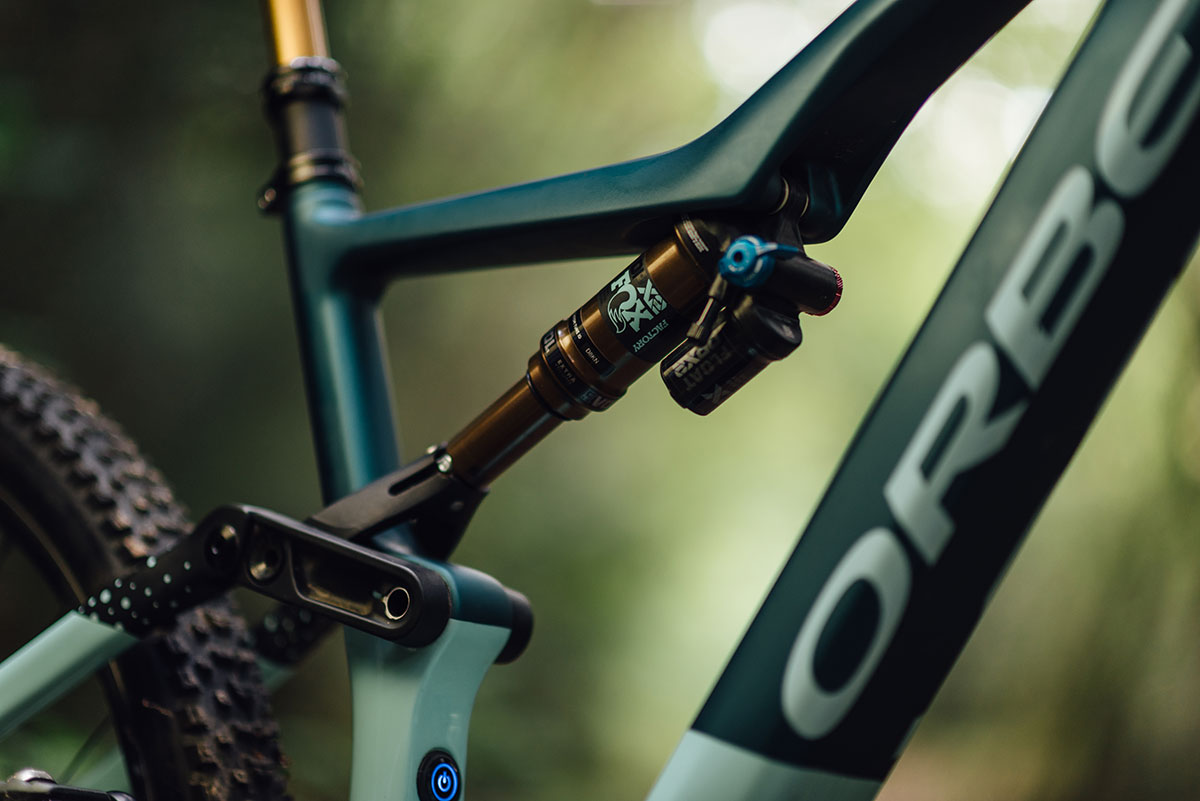 That said, it’s not designed to be a big hitter, neither in terms of range or power output. So, it can afford to be a little on the svelte side, and looks a lot more like a traditional full suspension mountain bike. The new Shimano EP8 drive unit goes a long way to aiding its sleek aesthetic, replacing the chunkier Shimano STePS E7000 and Bosch Gen 4 motors we saw on the Orbea Wild FS of 2019 and 2020. 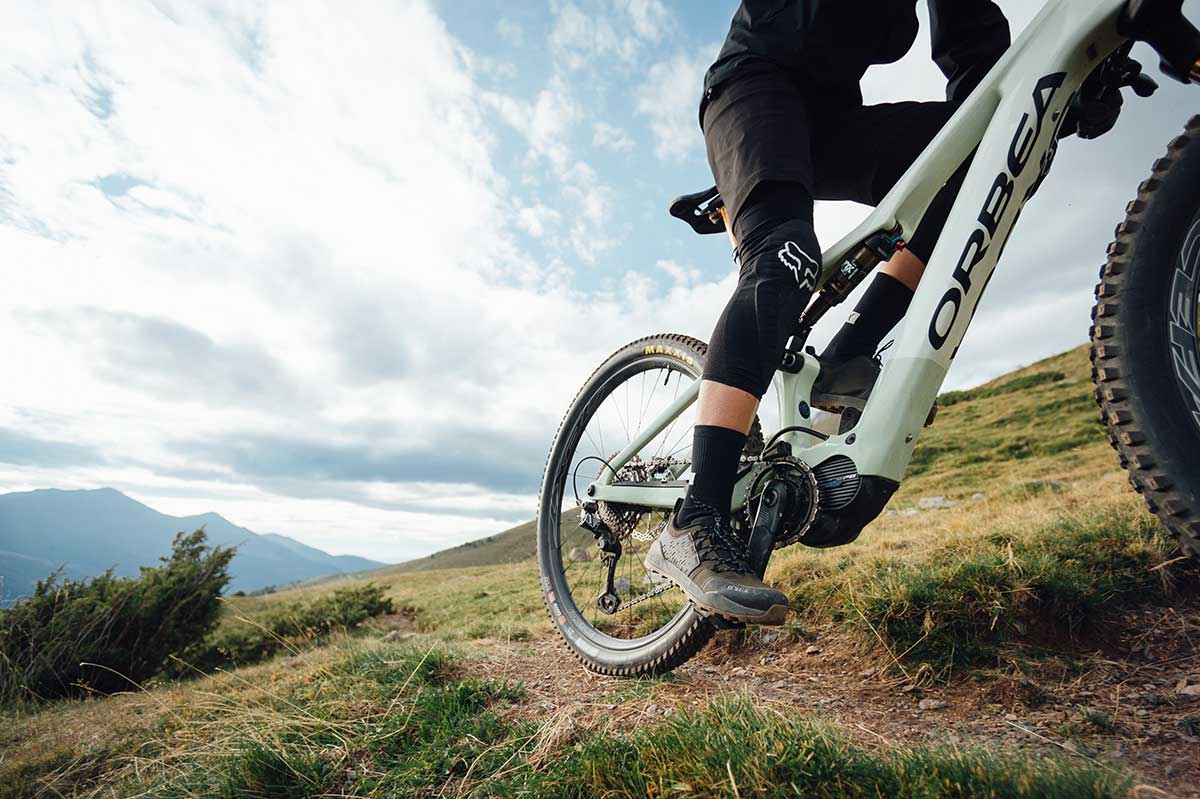 A narrow, lightweight 360 Wh battery slips into the downtube. Add an optional 252 Wh extender battery to get 70% extra range should you wish to carry the weight for longer 8 hour+ days in the saddle. The range extender takes the traditional place of a water bottle, mounted to the topside of the downtube inside the front triangle. 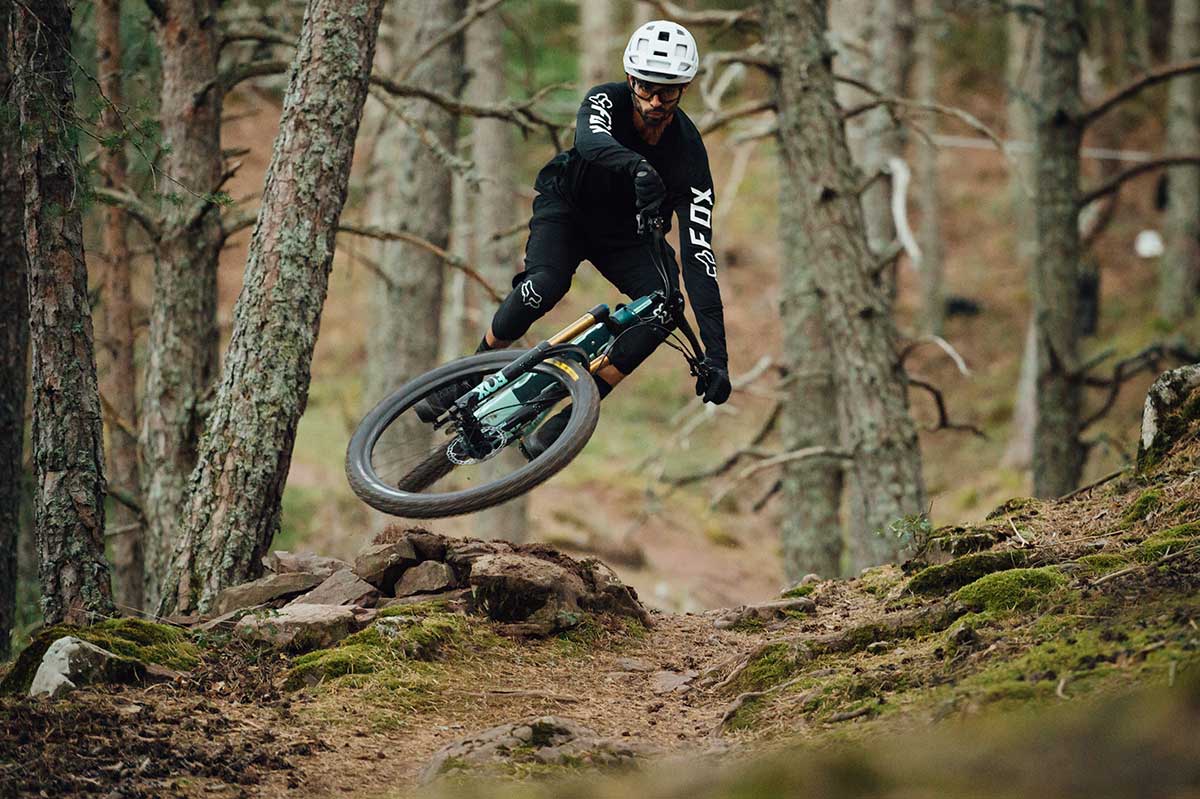 So, how is the Orbea Rise different to the Wild FS? It has the same 29″ wheel size, but is a little shorter on travel – the Wild FS got 160mm, front and rear. And, it was a hella chunky bike, with a downtube girth that was nothing short of massive – it even got a bridge between the downtube and seat tube. 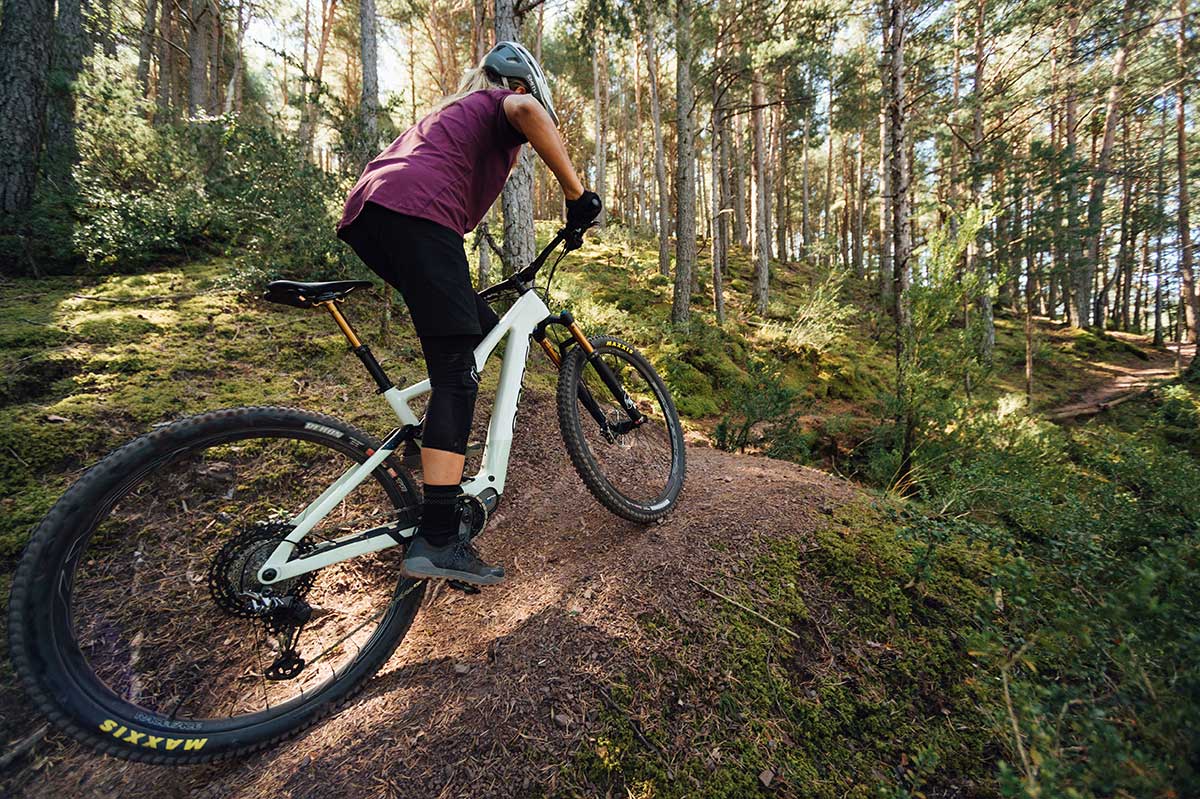 The new Orbea Rise was designed around their new concept dubbed “Rider Synergy”. Simply a new marketing term, perhaps, but here’s the deal. The guys at Orbea say the Rise e-MTB is designed for riders who aren’t simply asking the bike to carry them up the hill.

They are the type of rider who wants to feel some element of achievement in reaching the summit, having ridden up under a lot of their own steam. And, that rider that wants the natural feel of a traditional full suspension mountain bike on the descents too – rather than a weighty plough that wants to straight-line everything. 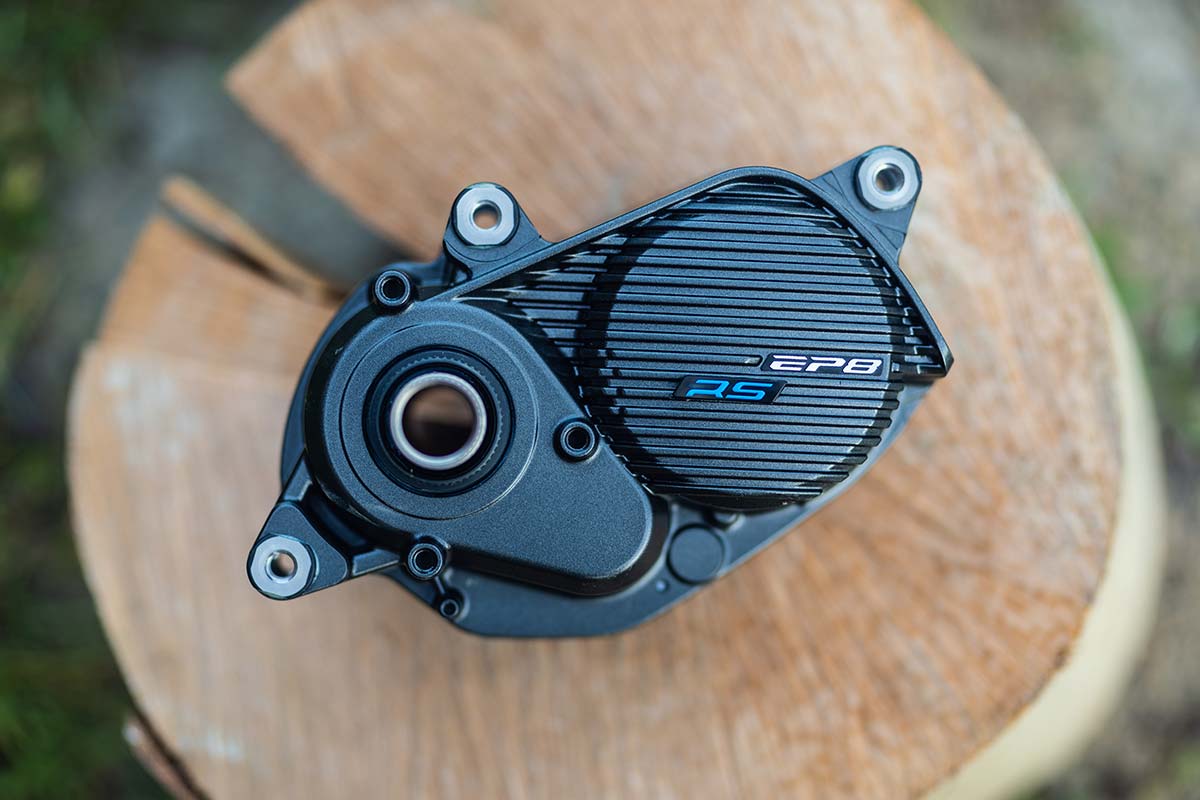 This is why Orbea worked with Shimano to build the Rise around a custom RS EP8 drive unit limited to a torque of 60 Nm, as opposed to the full 85 Nm it is normally capable of. It has a power map designed to “match your pedaling and cadence in a subtle, natural yet energetic way”. The motor is said to deliver maximum power when you are pedaling the strongest: the harder you pedal, the more power it will deliver. It could just be me but I reckon the same could be said for just about every e-MTB drive unit on the market. 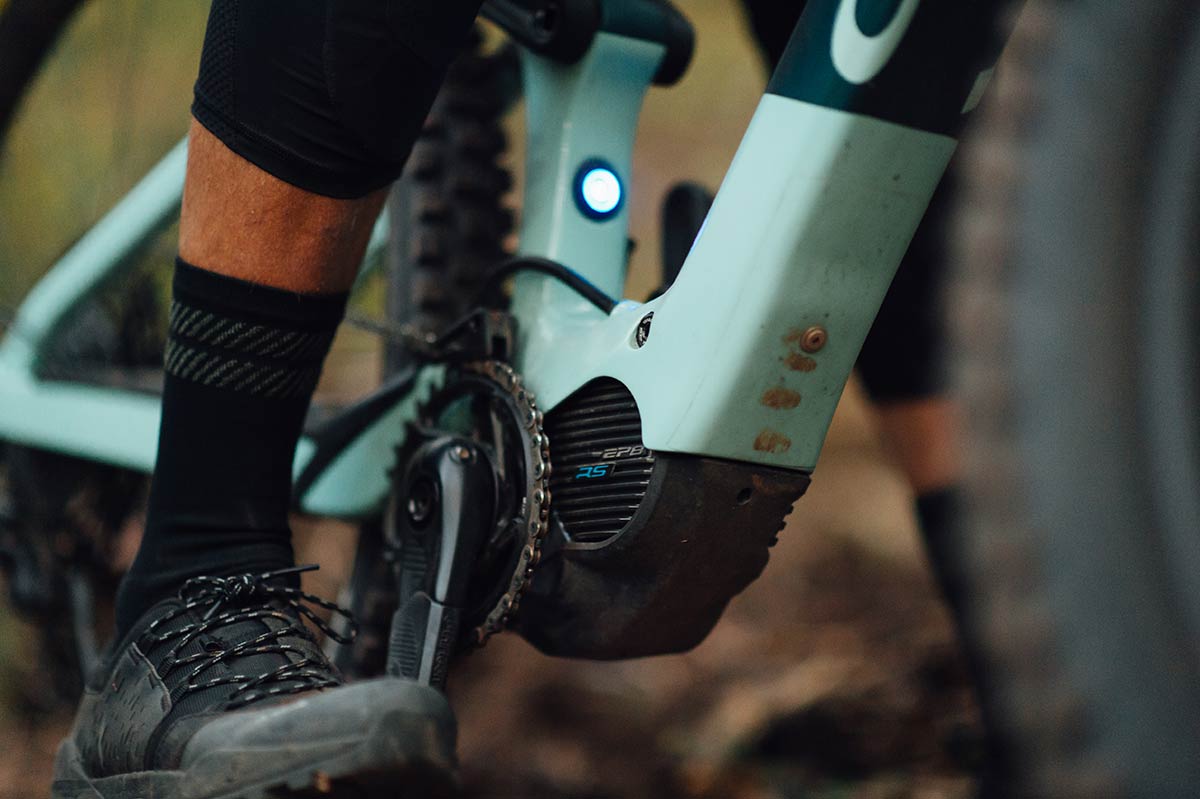 Orbea’s custom electronics are tuned so that the peak power delivery comes at pedaling cadences of 75-95 rpm, what would be considered an efficient climbing cadence for MTB. The EP8 drive unit is also said to be one of the quietest on the market – more like the second tier STePS E7000, quieter than the E8000.

As with the other Shimano drive units, Orbea’s custom EP8 is tuneable via the Shimano E-Tube App. Switch between the two RS (Rider Synergy) power profiles to get your desired power output increments at Eco, Trail and Boost levels. 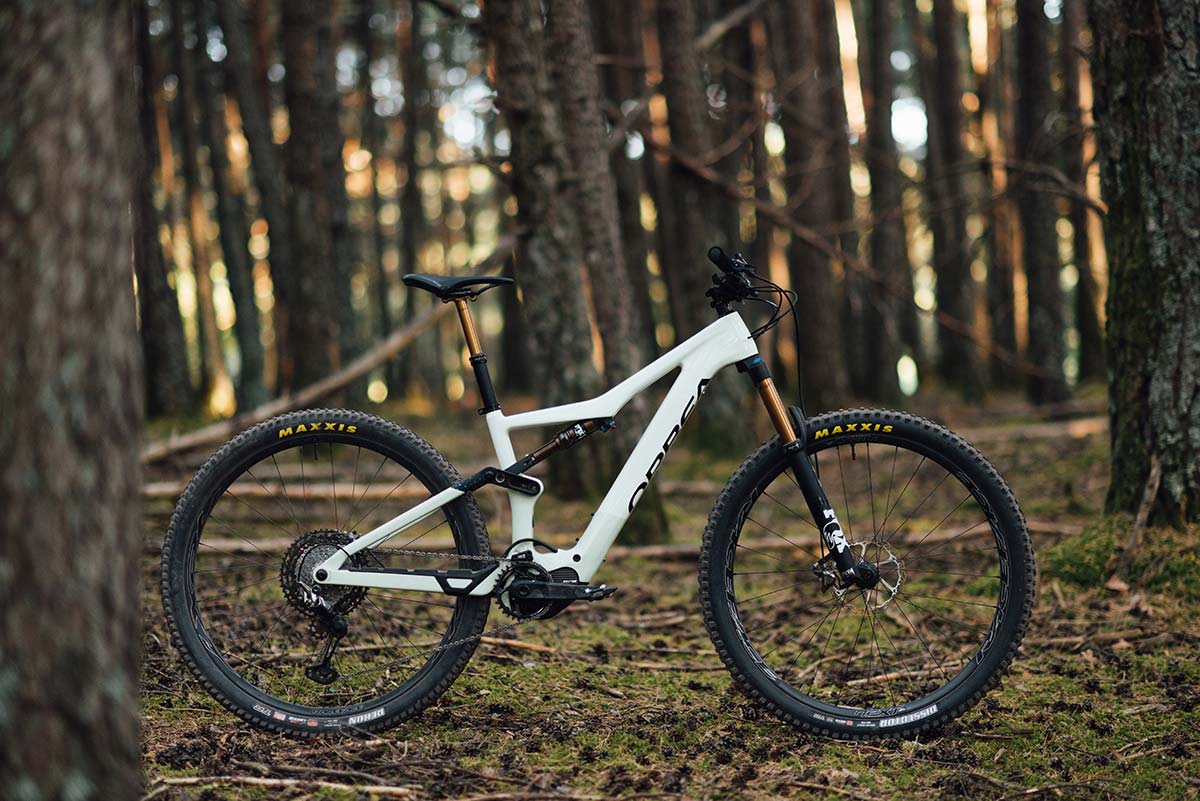 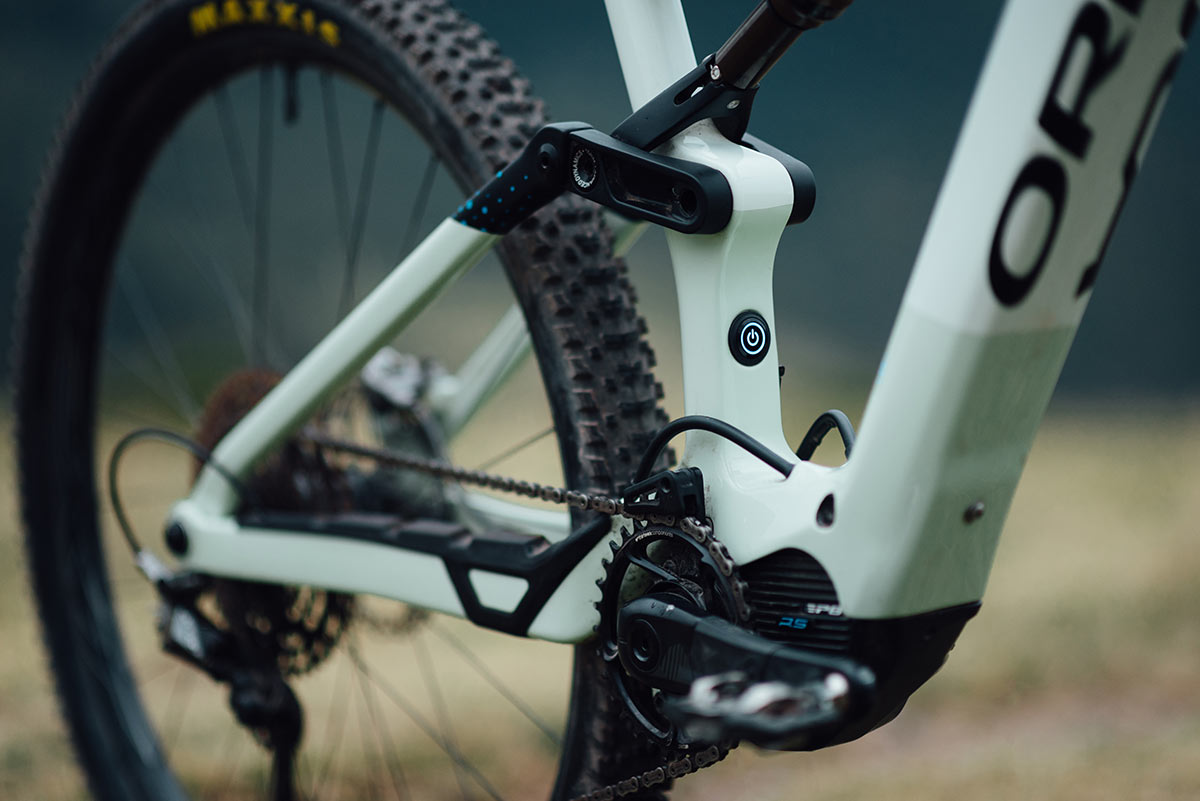 A 140mm fork comes standard on the Orbea Rise, but an optional 150mm Fox 36 is available – that extra 10mm up front alters the geometry slightly. That’s why you’ll see two values for head tube angle and seat tube angle in their geometry chart below. There is no flip-chip, so geometry isn’t adjustable. And no, you can’t run it mullet. 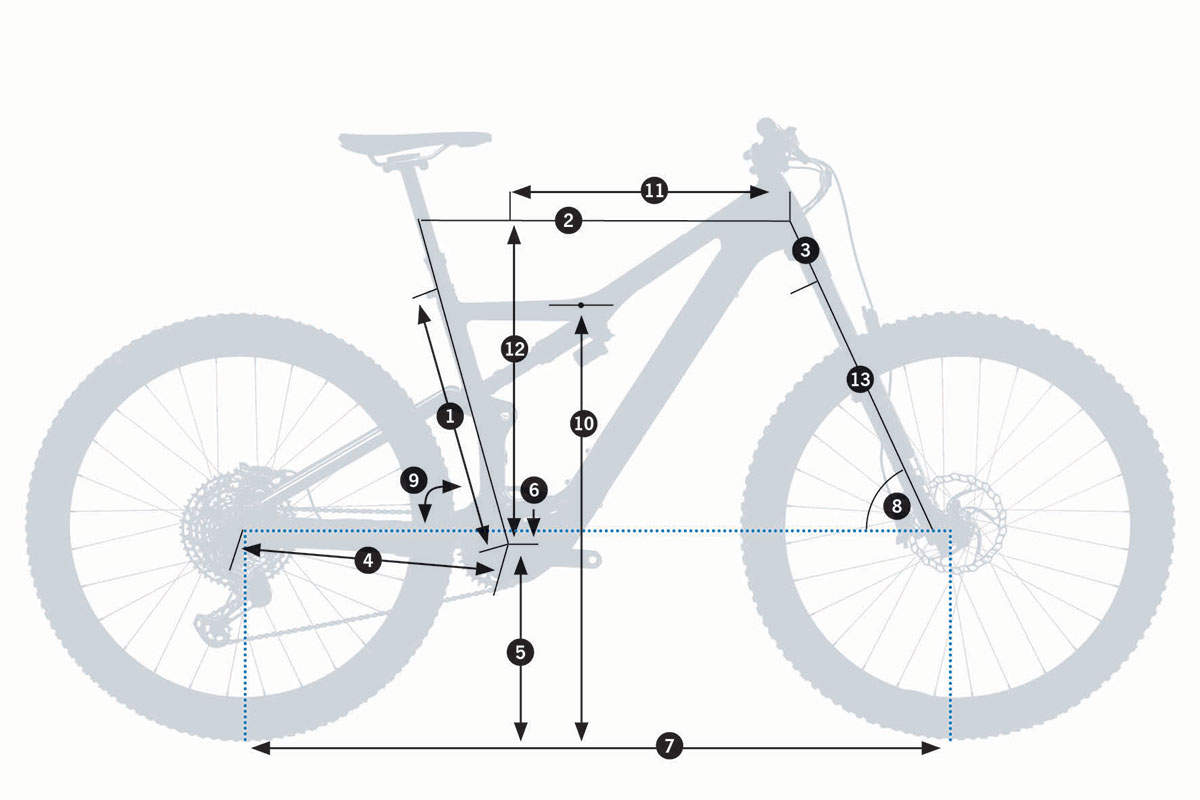 So, with that 140mm travel fork the HA sits at 66° and the seat tube at 77°, consistent across the size range. I make the point about that consistent seat tube angle as many brands will steepen it towards the larger frame sizes in order to maintain a sensible seated pedaling position for taller riders. Chainstay length is also consistent across the frame sizes; generous at 445mm. The BB drops 35mm from the dropouts. 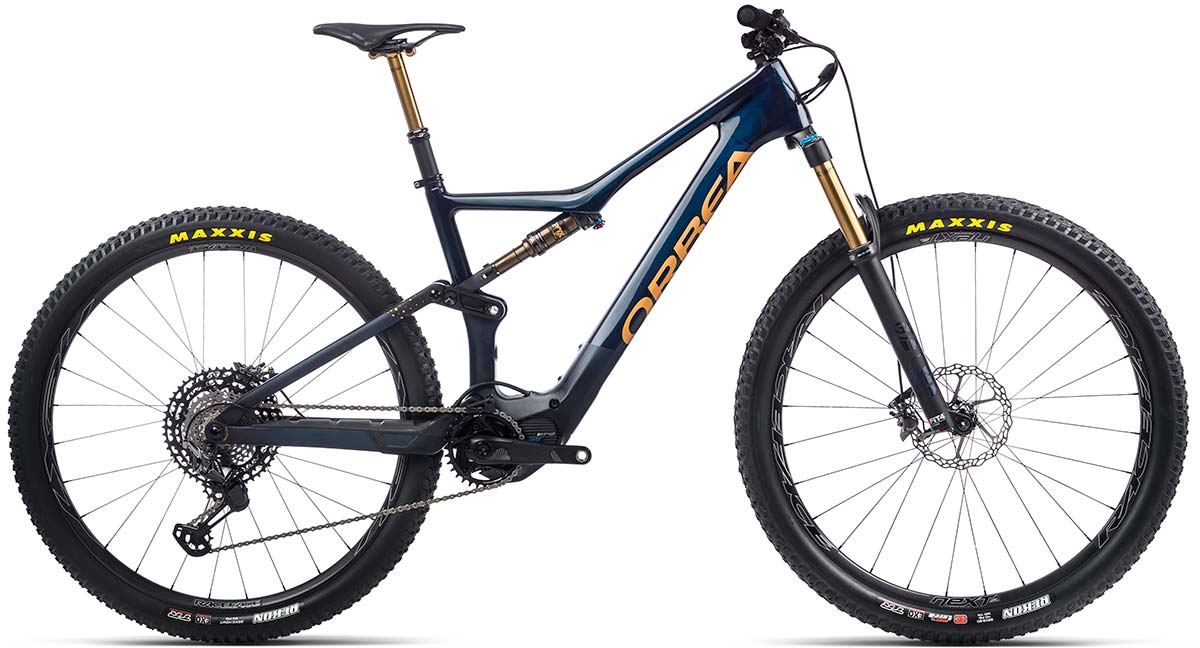 The Orbea Rise is available in four builds, all of which feature a full OMR carbon frame. At the top end we have the Orbea Rise M-LTD priced at $10,499. That top dollar gets you a Fox 34 Float Factory fork with FIT4 damper and a Float DPS Factory shock. It rolls on a carbon Race Face Next-SL XC wheelset fitted with Maxxis Rekon EXO casing tires. The Shimano EP8 drive unit works with XTR level components and a carbon e13 crankset. 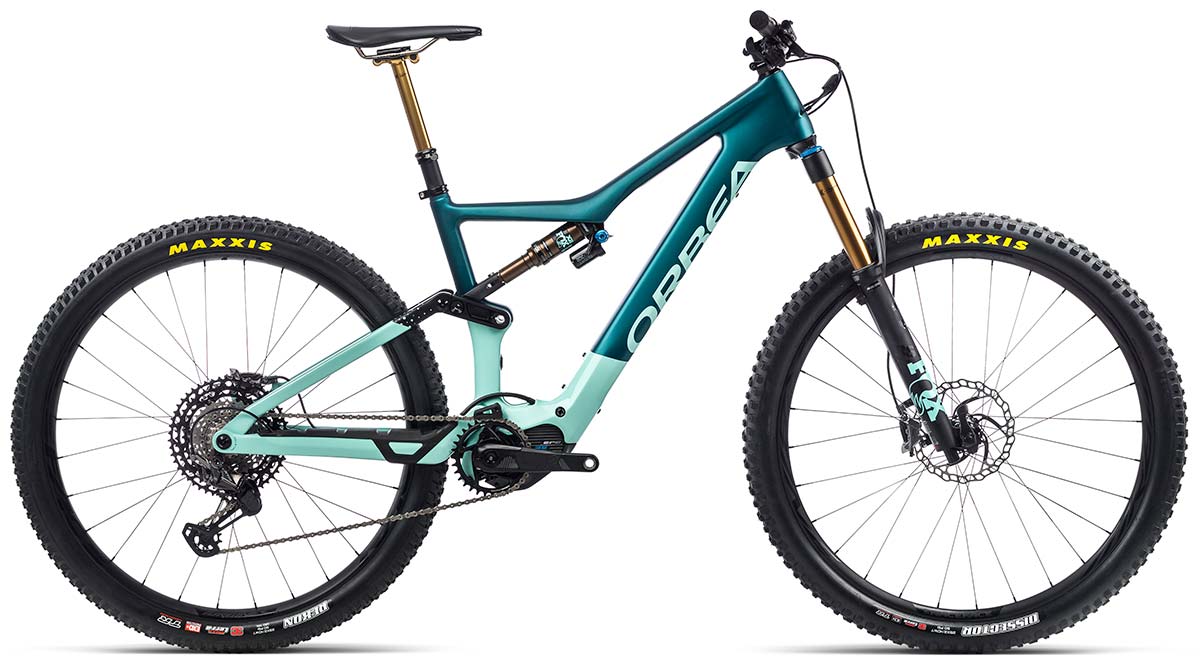 The M-Team build gets a 150mm fork as standard 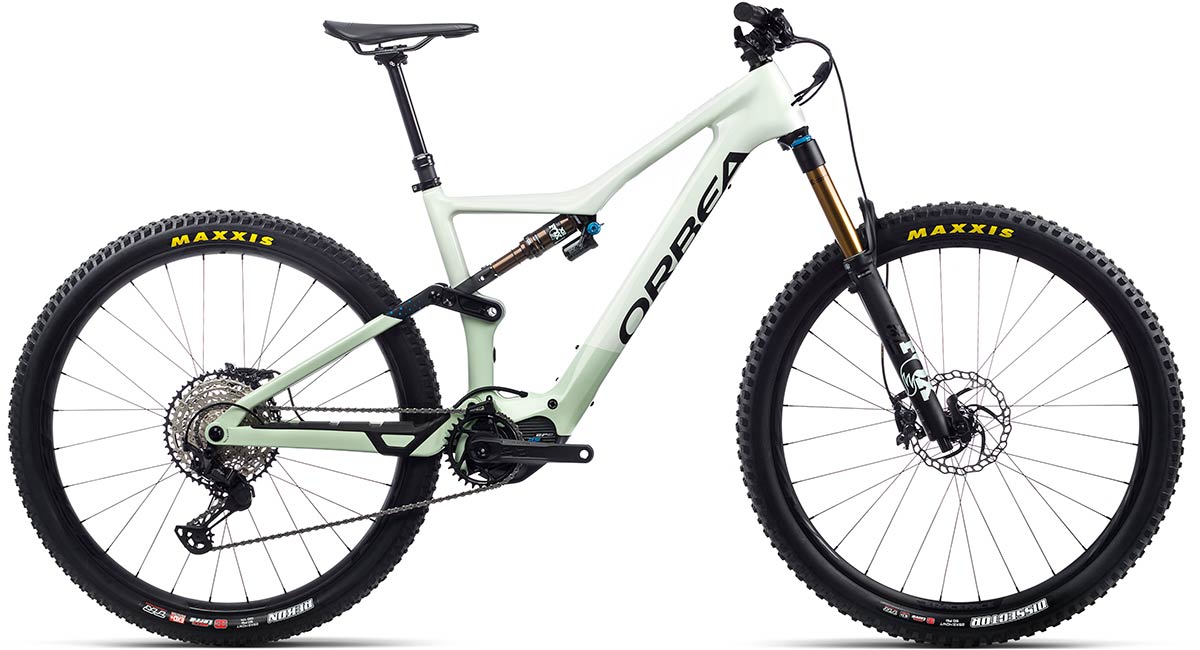 The mid-range Orbea Rise M10 features the same suspension as seen on the M-Team but with an aluminium e13 crankset, Race Face Turbine Wheelset and XT level drivetrain components. It will set you back $7,999. 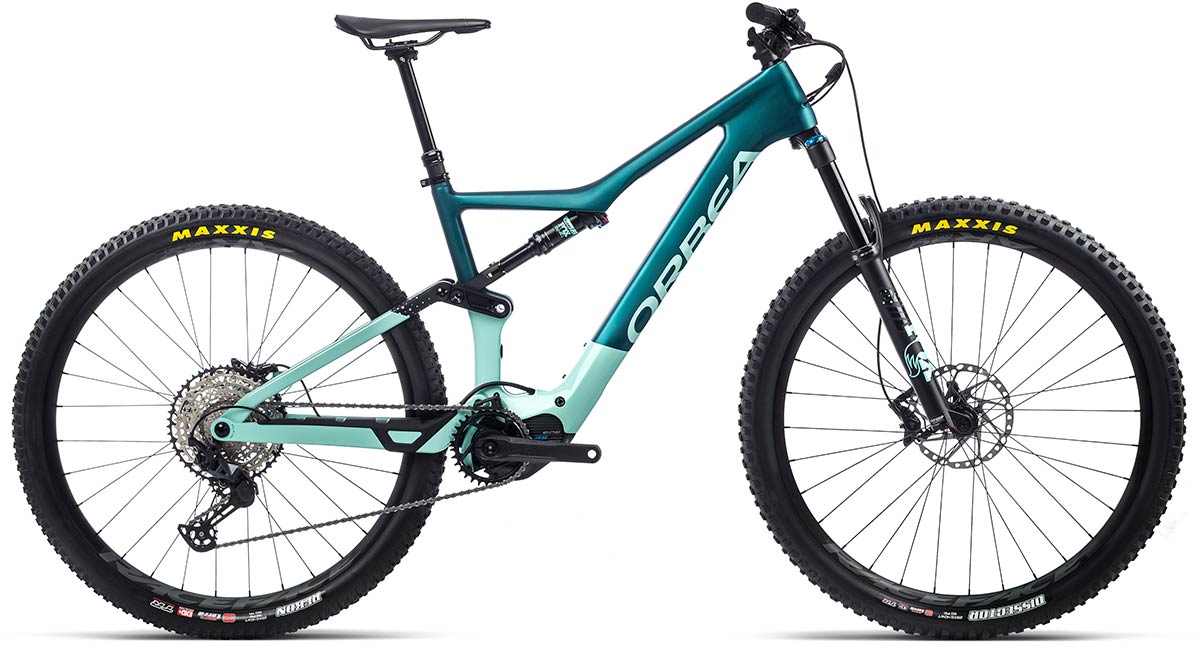 The most wallet-friendly Orbea Rise is the M20 build. It gets a Fox Float Performance 140mm fork, a DPS Performance shock, Race Face AR wheelset and SLX level drivetrain componentry. Get one for $6,499.

For full details on pricing and availability, head to the Orbea website.

Seriously? Does this article mention the word weight 5 times and not actually list the weight of the bike anywhere?

If you read the article, you’d see it in the very second sentence as 16.2kg, for the top end model. Maybe add a bit between each spec level.

“Challenging the class-leading numbers of the Specialized Turbo Levo SL, the all-new Rise weighs a claimed 16.2 kg for a medium frame, top-end M-LTD model.” Just to direct quote the article to make it easier!

Bravo Orbea, for listening to what most of the riders want, instead of the moto shred bro’s that think more bike and more power is cool. Anyone that’s spent a lot of time riding a mountain bike with some assist will tell you that they only use the fast modes on the road, whereas full power off road is just not needed and in some cases detracts from the ride.

oops 30% less expensive than my sl, i should have waited