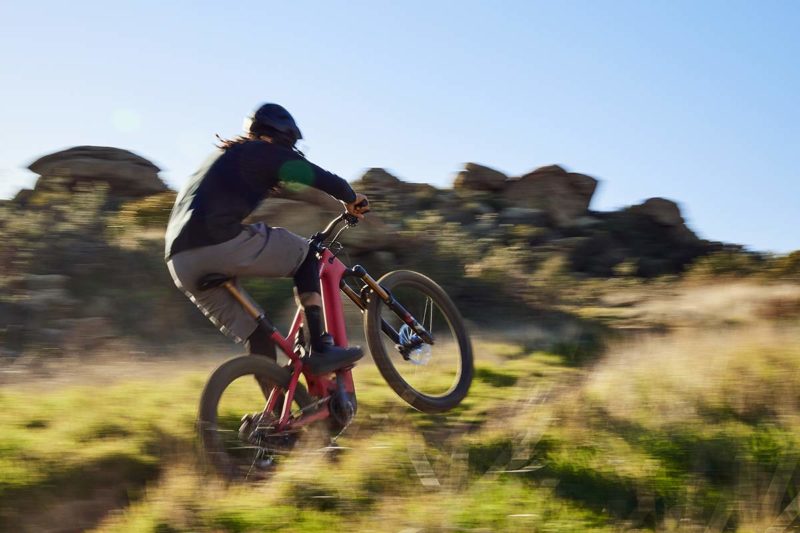 We’ve been testing this for the past couple months, and it’s a beast. We’ll cover riding impressions in our review, but first, let’s look at all the new tech and details…

While it’s a bit light on actual tech details, the Levo Gen3 launch video definitely maintains the high production value of other recent launch videos. Did you stick around until the end? Just sayin’, there’s a teaser…Kenevo Prime? 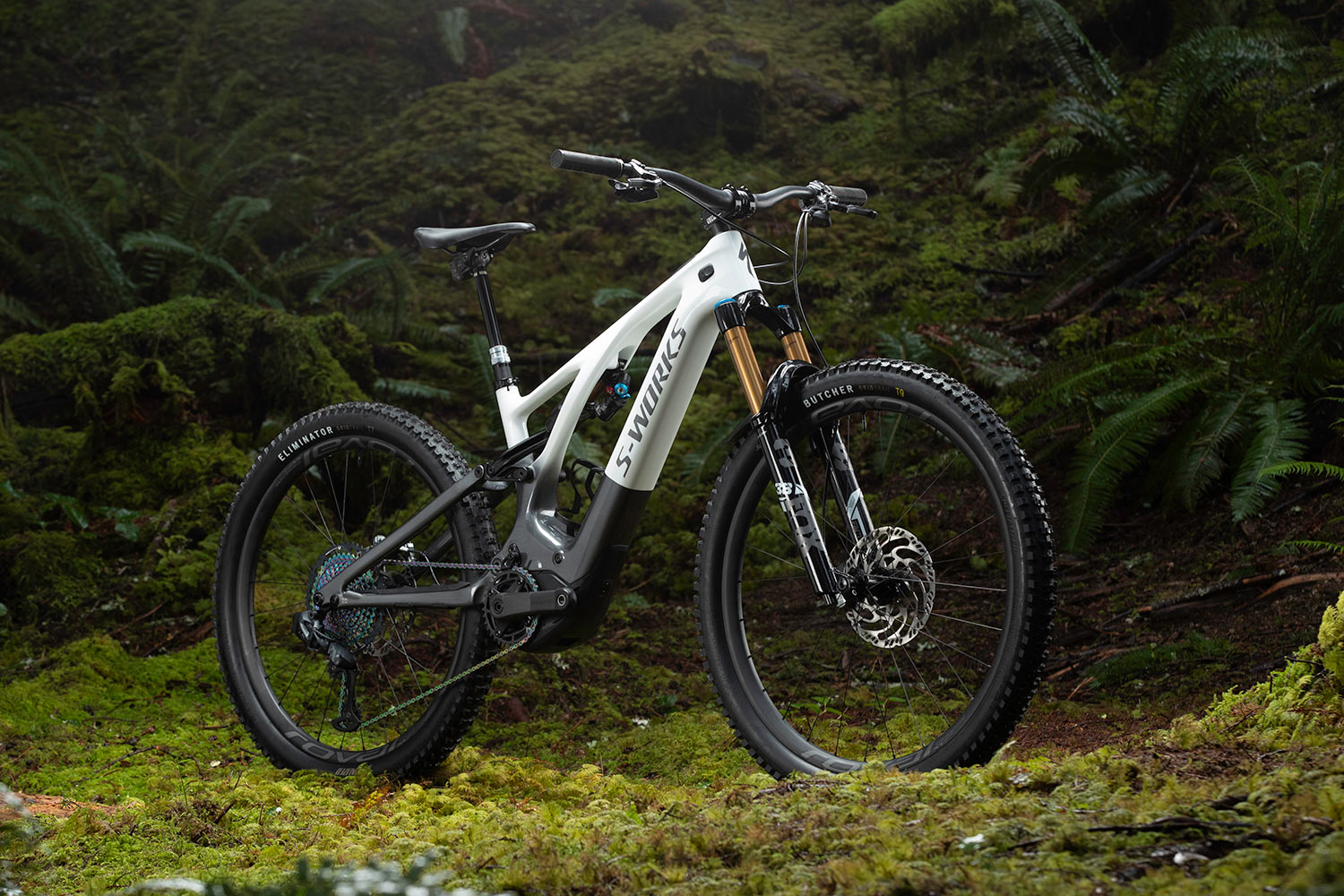 Here’s the short of it: The 3rd generation Turbo Levo switches to a “mullet” mixed wheel size format, adds a rear flip chip at the lower Horst link, and adds an adjustable headset cup system. Combined, these give you six different positions that affect chainstay length, head angle, and bottom bracket height.

The motor and battery carry over, but with an upgraded belt inside to improve durability. Their Mission Control head unit is all new and provides a lot more data, and new ways to control the motor’s output.

It’s hard to say which change is most important, but let’s start with the move to a 27.5″ rear wheel. It keeps a 29er front wheel, both spec’d with Specialized’s GRID casing Butcher (front) / Eliminator (rear) 2.6″ tires.

The goal was to give the Levo 3 a familiar feel, very similar to the recently introduced Stumpjumper EVO. But, they couldn’t just copy/paste the geo, for two reasons: 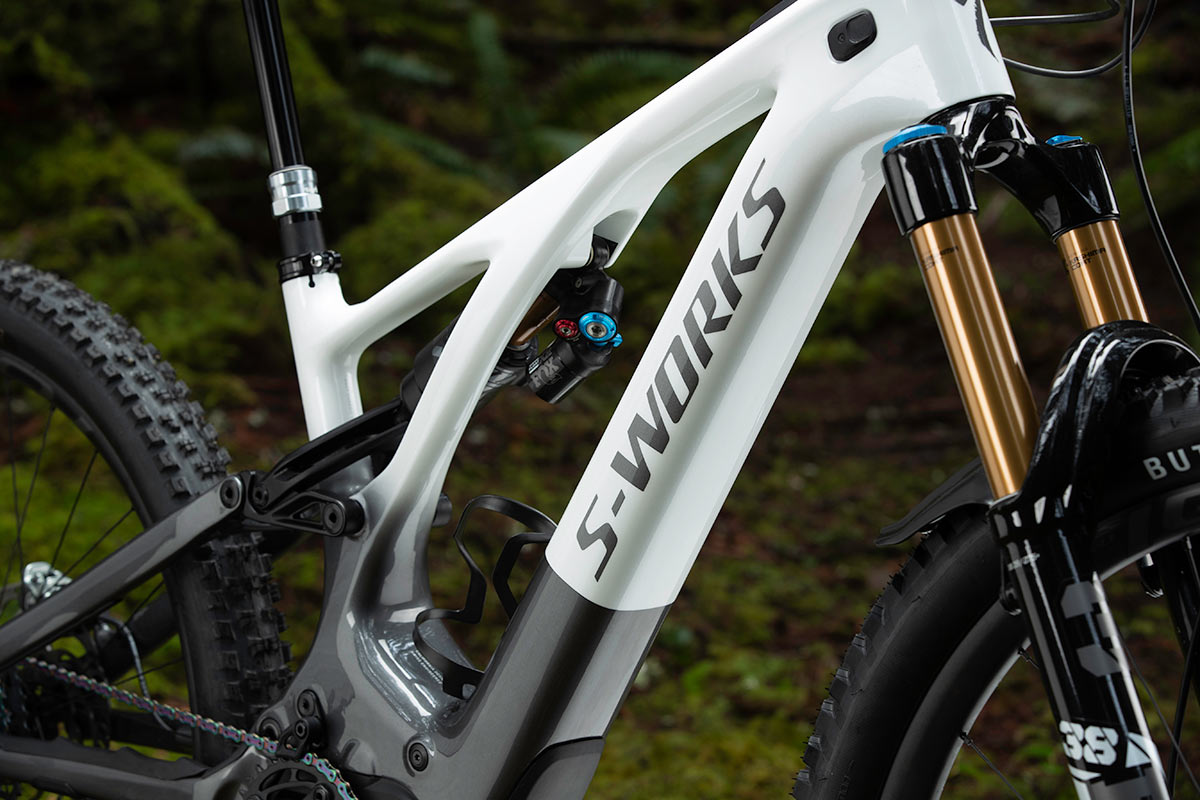 That’s what led to a complete redesign of the suspension, geometry, wheel size, and more.

There are a couple things that carry over from the analog Stumpjumper EVO. The Levo v3 has the same 150mm rear travel with a 160mm fork (150mm on the smallest size). They say the geo works up to 170mm forks, but the warranty is only valid with 150-160mm forks.

And it uses the same S1-S6 sizing scheme, which is a big upgrade from the prior generations’ four frame sizes. Now you have six frame sizes, plus flip chip and headset adjustments. More on those in a sec. 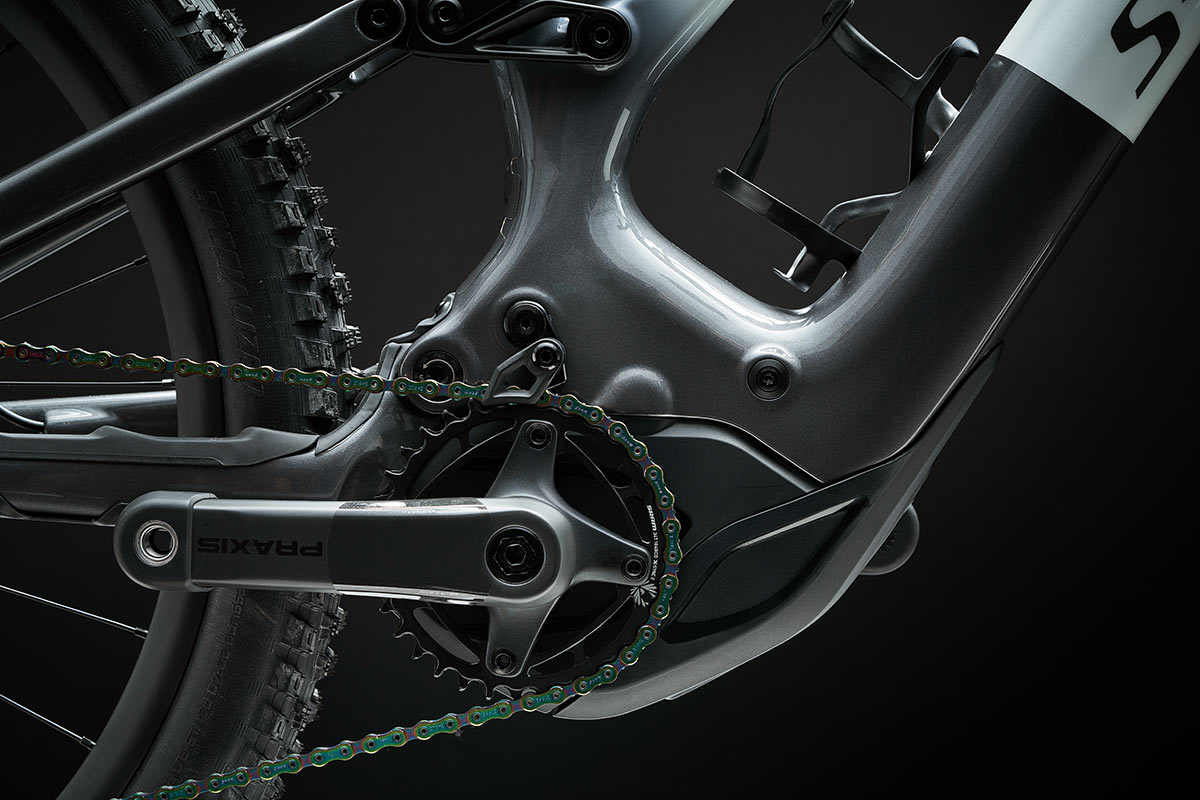 The reason for the smaller rear wheel is that it let them get the chainstays down to 441mm (17.36″), even with the motor increasing the BB shell’s size. That’s 14mm shorter than before, giving the bike a more playful, nimble personality.

Does the smaller rear wheel affect the e-bike’s range? They say you’d see more of a difference by changing rear tires, meaning, a heavier more robust tire would reduce range more than the difference going between 29er and 27.5″. 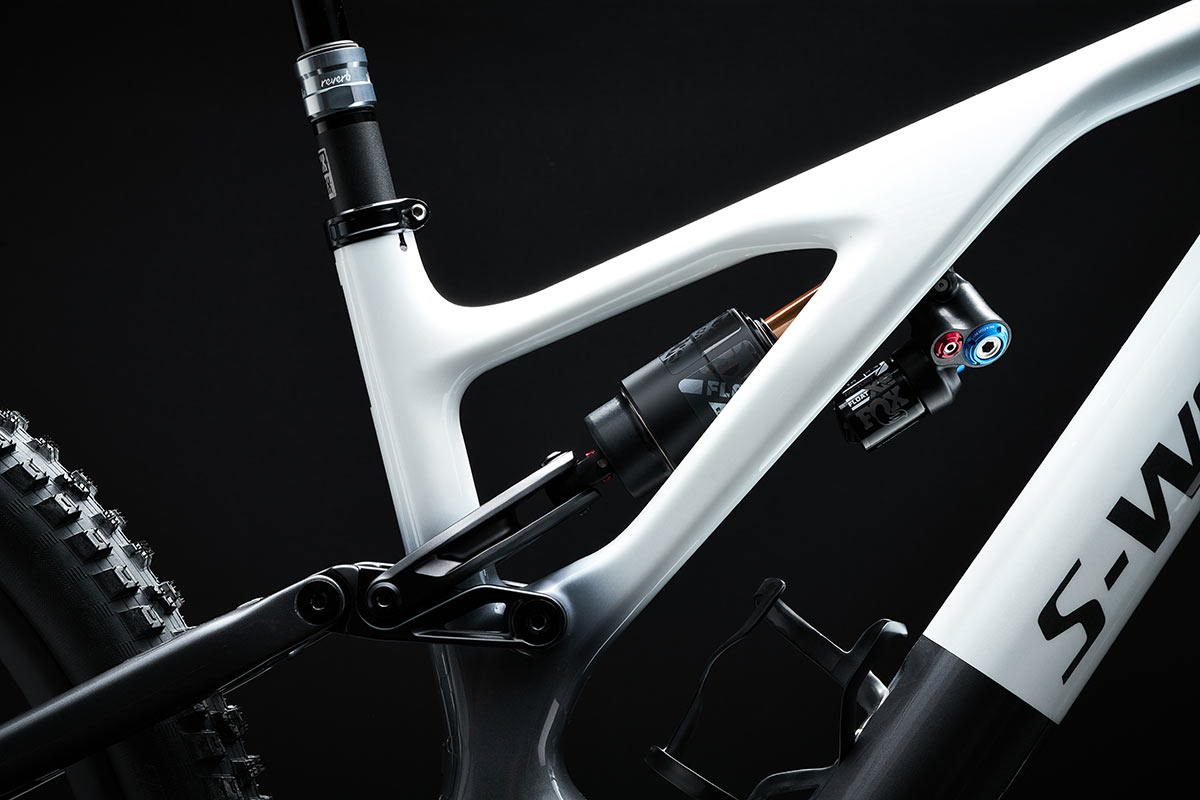 Another goal for the new Levo was to open the frame up to fit bigger shocks. And bigger water bottles.

The front triangle was redesigned to make room for rear shocks with external damping reservoirs. Check the prior model and you’ll notice there was NO room for a piggyback shock. Coil shocks will fit, too.

Now, you can fit a more capable shock and have room for a full-size water bottle. You’ll probably still want a side-entry bottle cage, though. 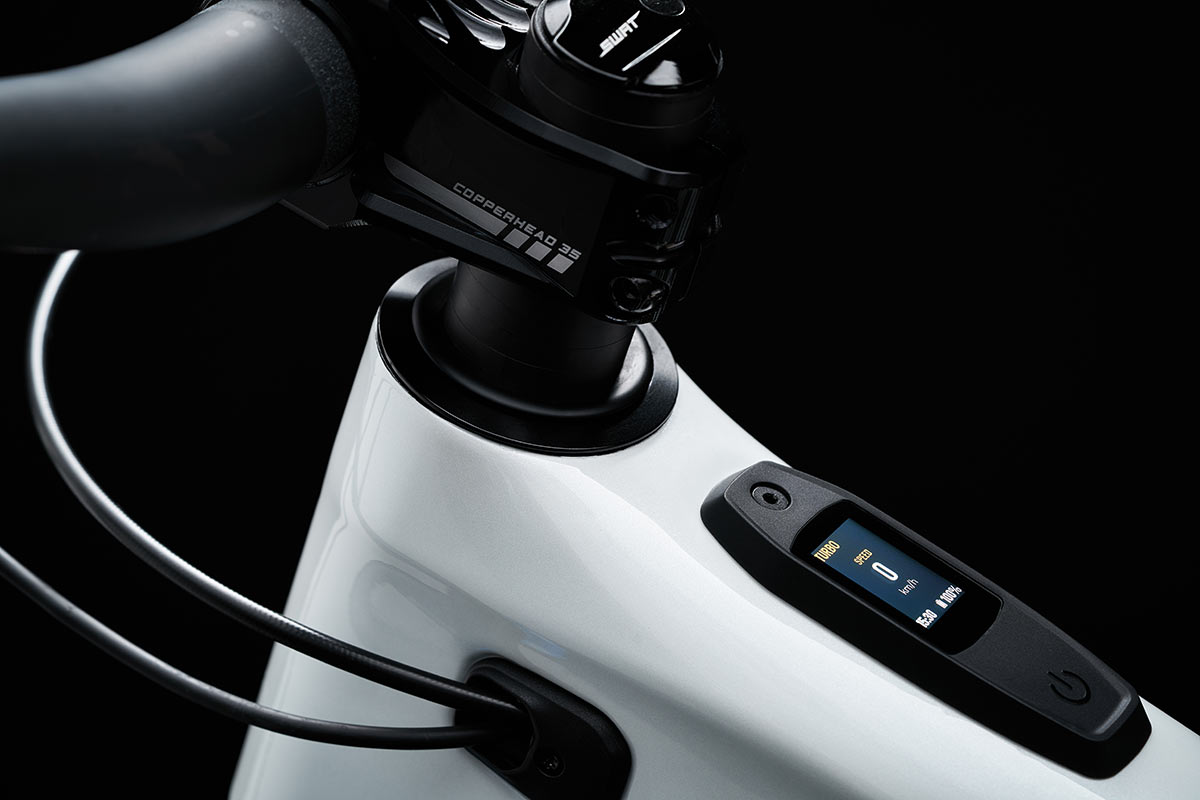 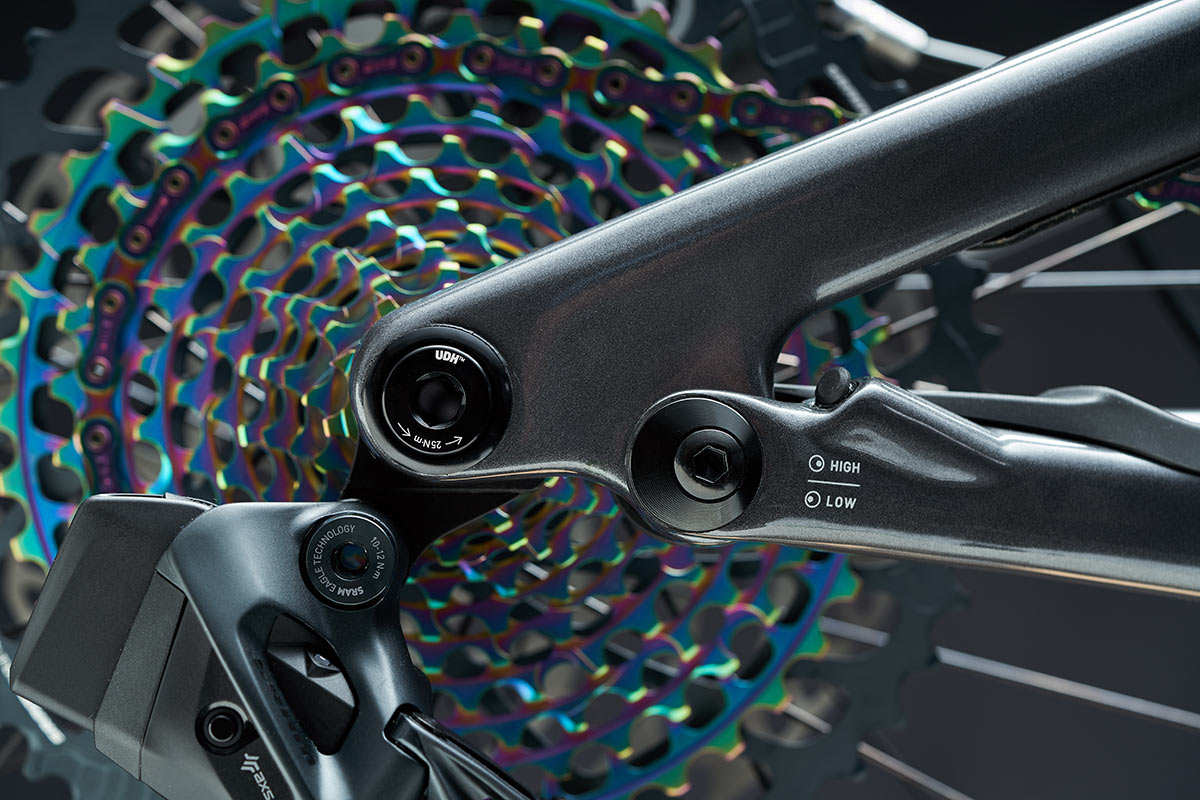 Changing the rear flip chip from High to Low will drop the bottom bracket 6mm and make the head angle 0.5º slacker in all positions. Doing so also lengthens the chainstay by 6mm, pushing out to 447mm in Low mode. 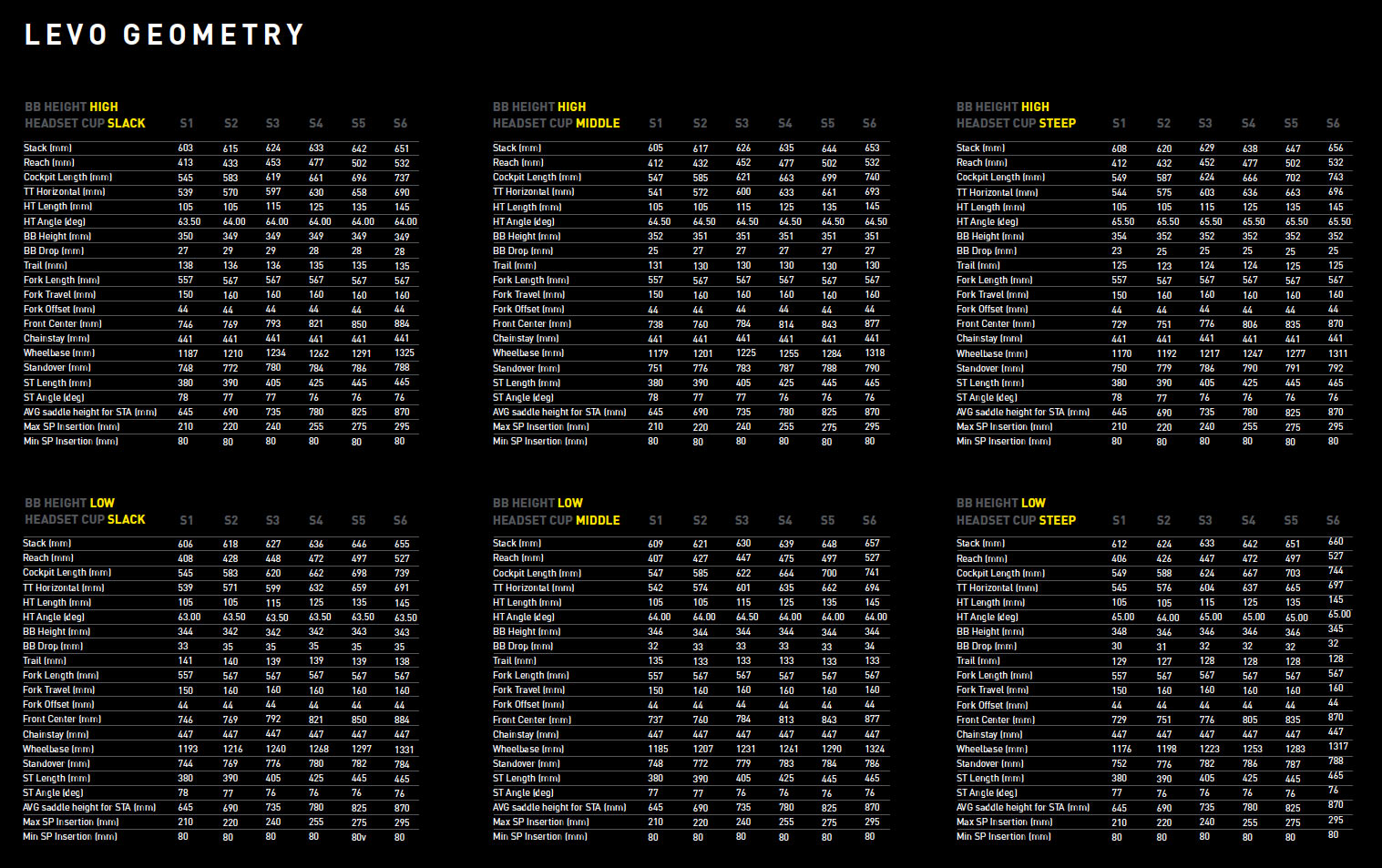 Wheelbase changes slightly with each adjustment, too. Click this (or any) image to enlarge. 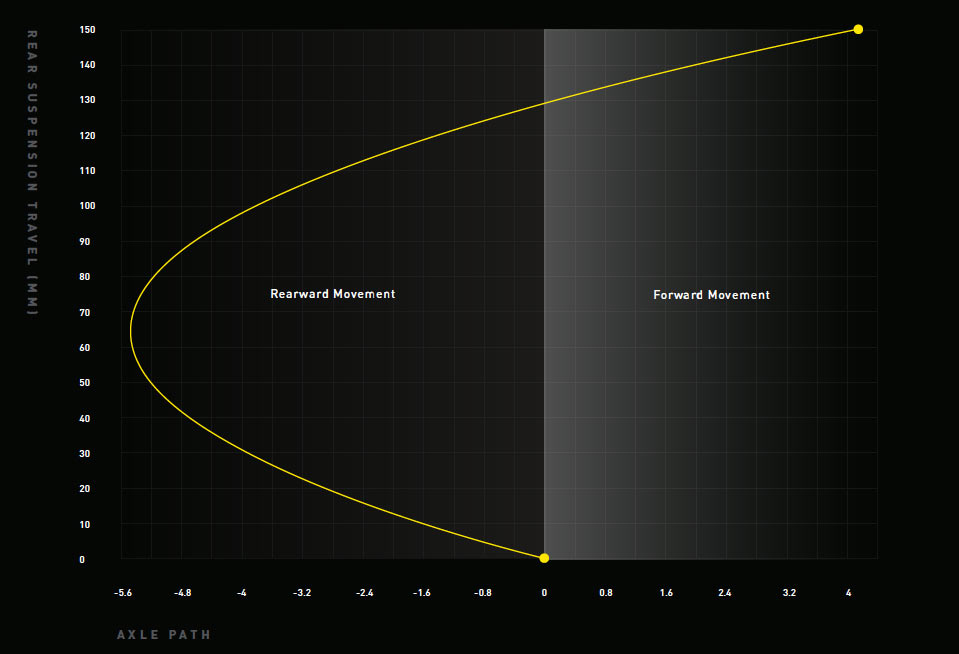 The suspension kinematics were refined to create a more rearward axle path in the first third of its travel. This helps the rear wheel move “with” the terrain as you hit something, so it gets less hung up on square-edged hits like roots and rocks, thus keeping the bike moving forward without slowing down. 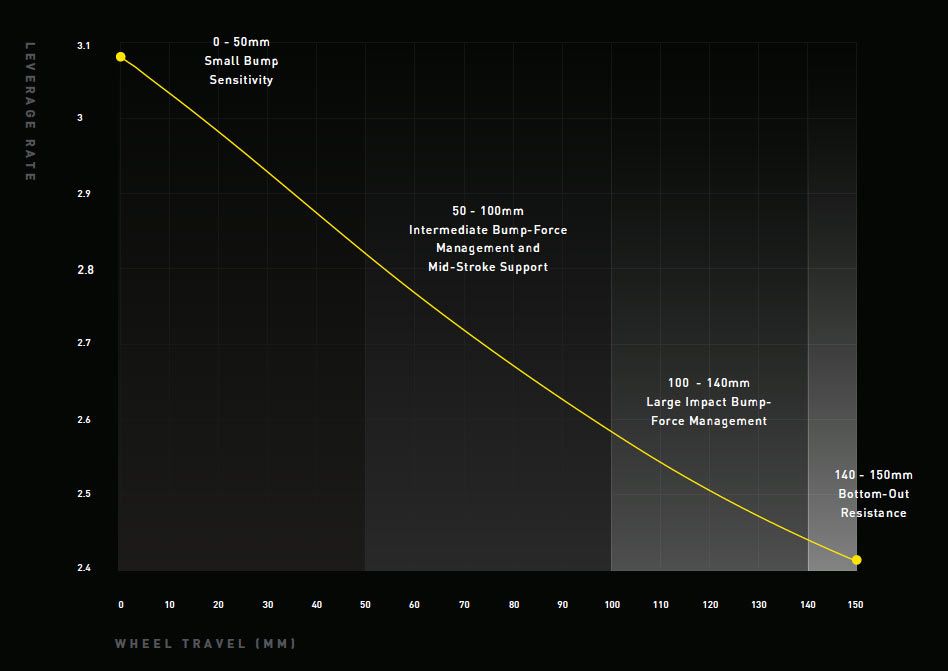 The leverage ratio is similar to the Stumpy’s, getting more progressive deeper into its travel. With higher leverage in the beginning of travel, it’s more sensitive to small bumps, but loses leverage as it gets deeper into the travel to avoid a harsh bottom out.

Internally, the shock was retuned specifically for the bike’s heavier weight and higher speeds. 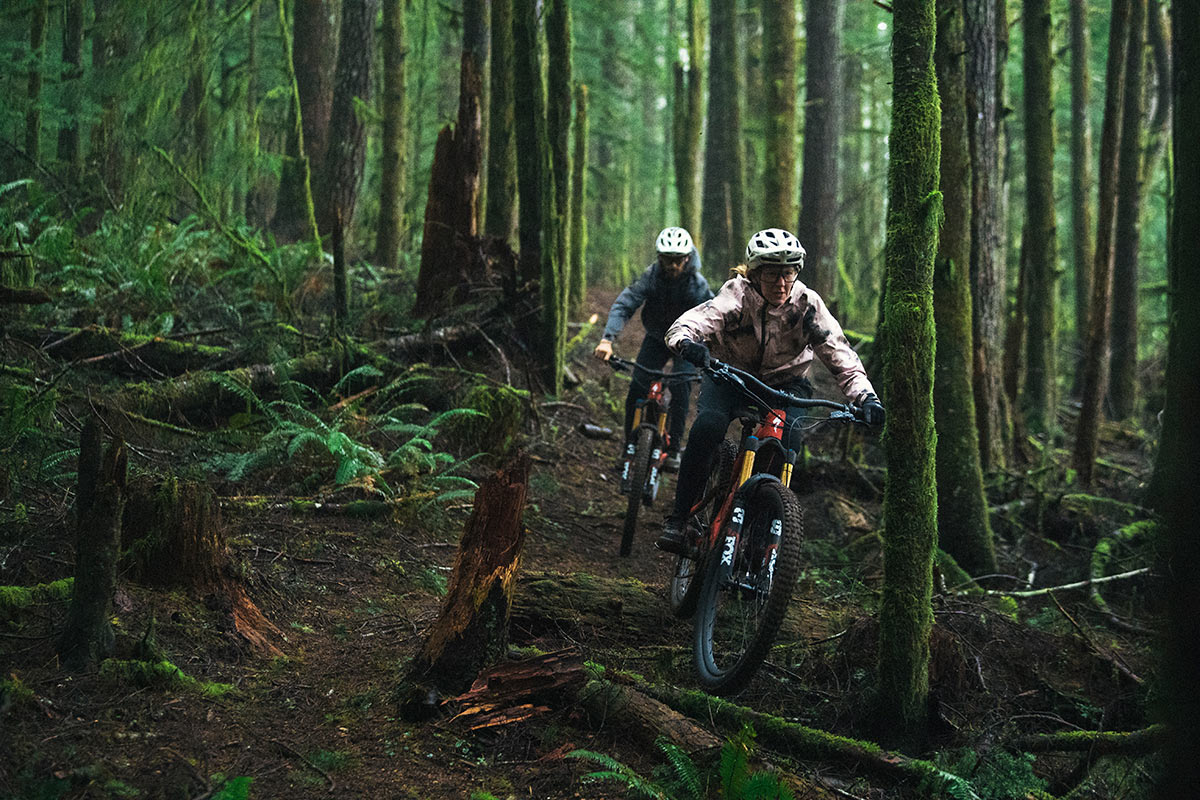 The motor itself is a new, more robust 2.2 motor, which delivers a massive 90Nm of torque and 565 watts of power. That’s the same output as before, but two key features are new.

First, a new belt should last longer than the original. They say some past Levo motors had belt durability issues, so they found a new material and are using an all-new belt to increase durability.

Second, there’s additional weather sealing for the battery connection. There’s a cover, and then a second latch to unplug it that has additional sealing around it. Stream crossings shouldn’t be an issue.

They say the motor only adds 2.8w of drag, which, for all practical purposes is no friction or drag from the motor when it’s not assisting you. 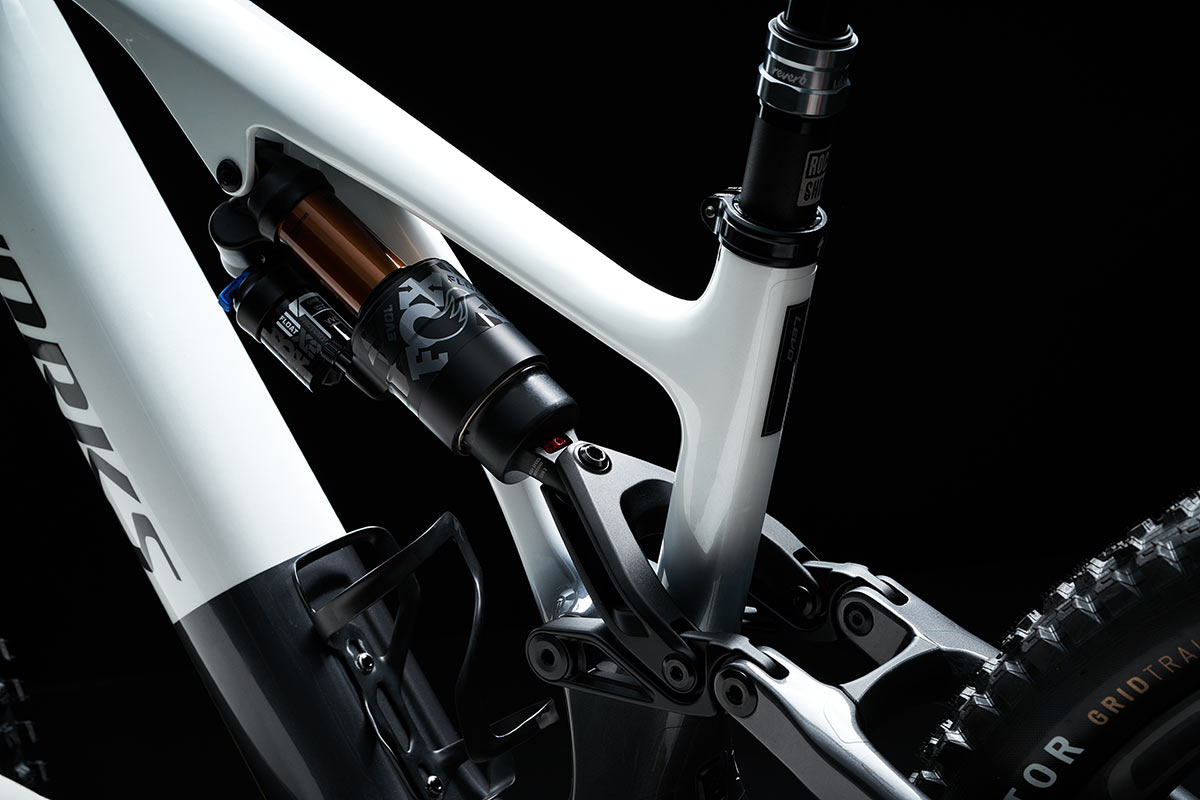 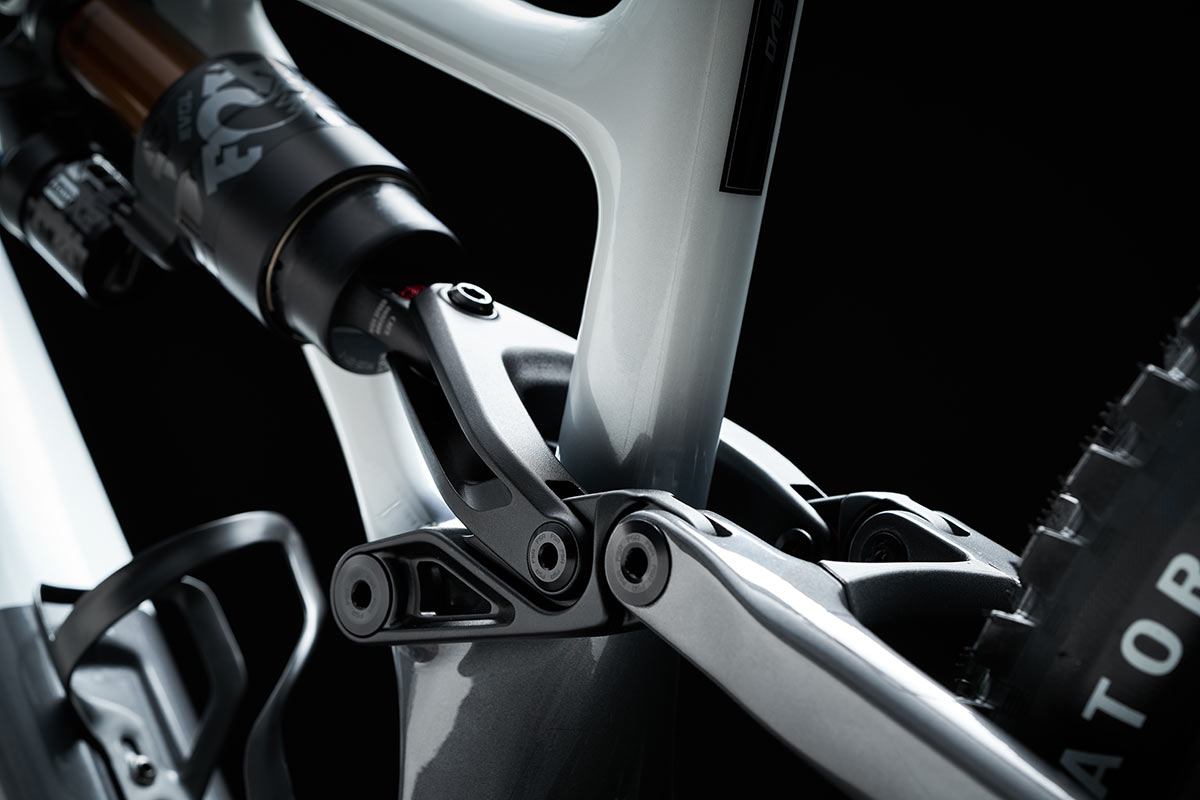 They also reworked the upper seatstay bridge and linkage to increase stiffness and clearance, opening everything up to allow full travel with the shorter rear end.

Meter it out wisely and you could get up to 5.5 hours of assisted ride time from this beast. To help with that, there’s a new Mastermind firmware that you can use with the app to tune its output to your needs, whether that’s assist level or maximizing the 700Wh battery’s life.

They say the battery has 1,000+ charge cycles without degradation, and takes about 5h15m to fully recharge from dead. 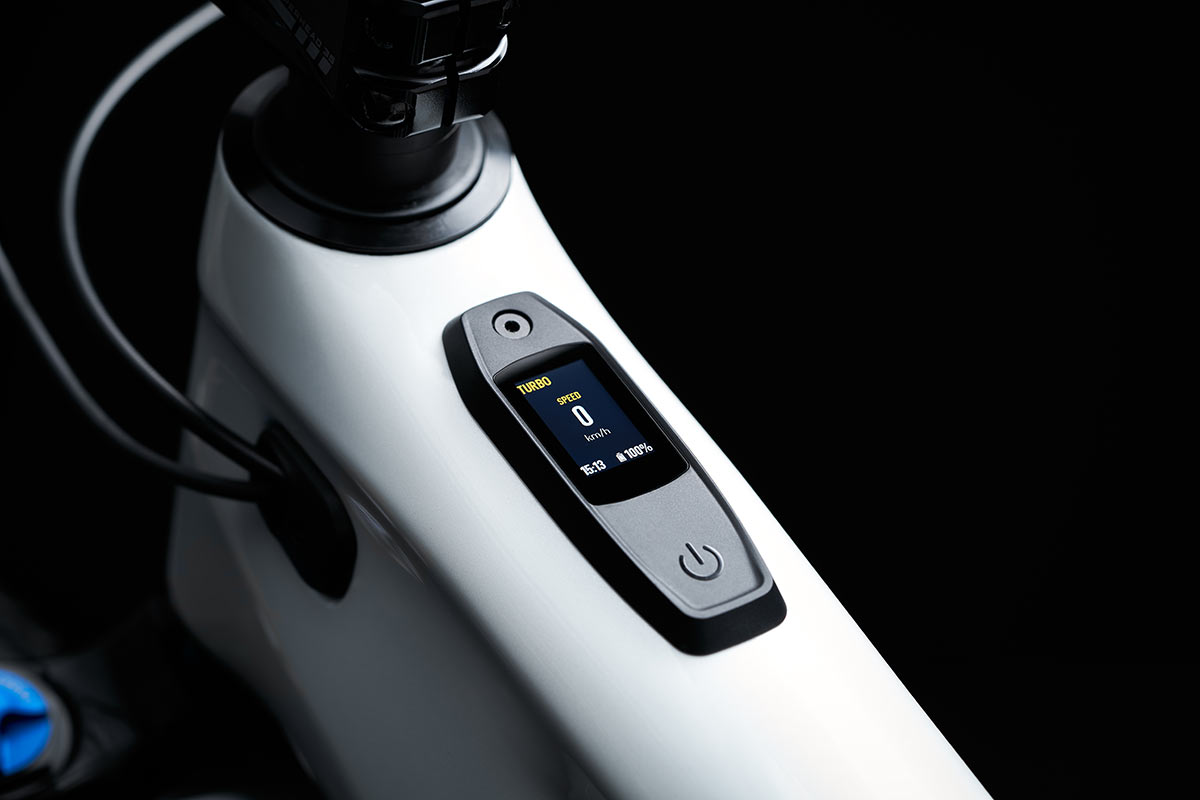 There are actually two components to controlling this bike – The Mastermind Turbo control unit and firmware, and an updated Mission Control app. Three if you count the handlebar-mounted toggle switch.

Mastermind is the new control display on the bike. Gone are the simple color blocks, it’s an actual real display, with Gorilla Glass so you’re unlikely to smash it and a coating to help keep it clean. You can switch screens to show more or less data, and you can even use the app to customize which, and how many, metrics you see on each screen. The Mission Control app lets you customize the settings for Eco, Trail and Turbo modes. Between total assist power and the ratio of assistance, you have a lot of control over how the motor behaves.

Another big change is the ability to switch out of their preset Eco, Trail and Turbo modes and go into MicroTune. MicroTune lets you adjust the support level in 10% increments, which means you can quickly and easily match the output of other e-bike riders in your group, so you can all ride together without trying to pedal a weird cadence or use the app to try to match other brand e-bikes. It’s brilliant in its simplicity.

It’ll also let you input the duration or distance of your ride and let the software calculate the output to ensure the battery lasts for the whole ride. Other fun metrics include: 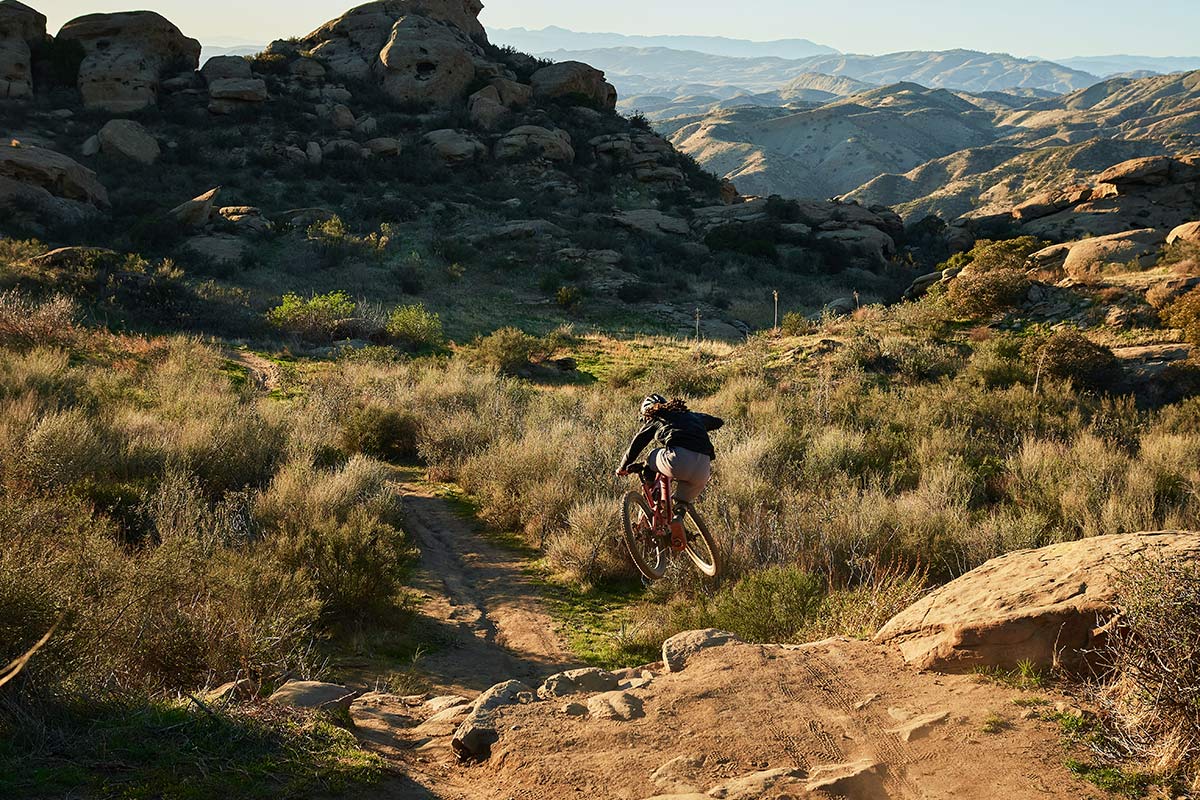 To take full advantage of these features, you’ll want to pair and run Mission Control while riding, so make sure your phone is charged up, too. You don’t need it for anything on the bike to work, but it enables ride tracking of all the metrics, your route, etc.

This is a software-driven system, so as they fine tune it, you can update your bike. Specialized highlights that because they’re using a proprietary system, they have full control over the system’s performance. Even better, updates are done over the air, so they can push updates through the smartphone app. 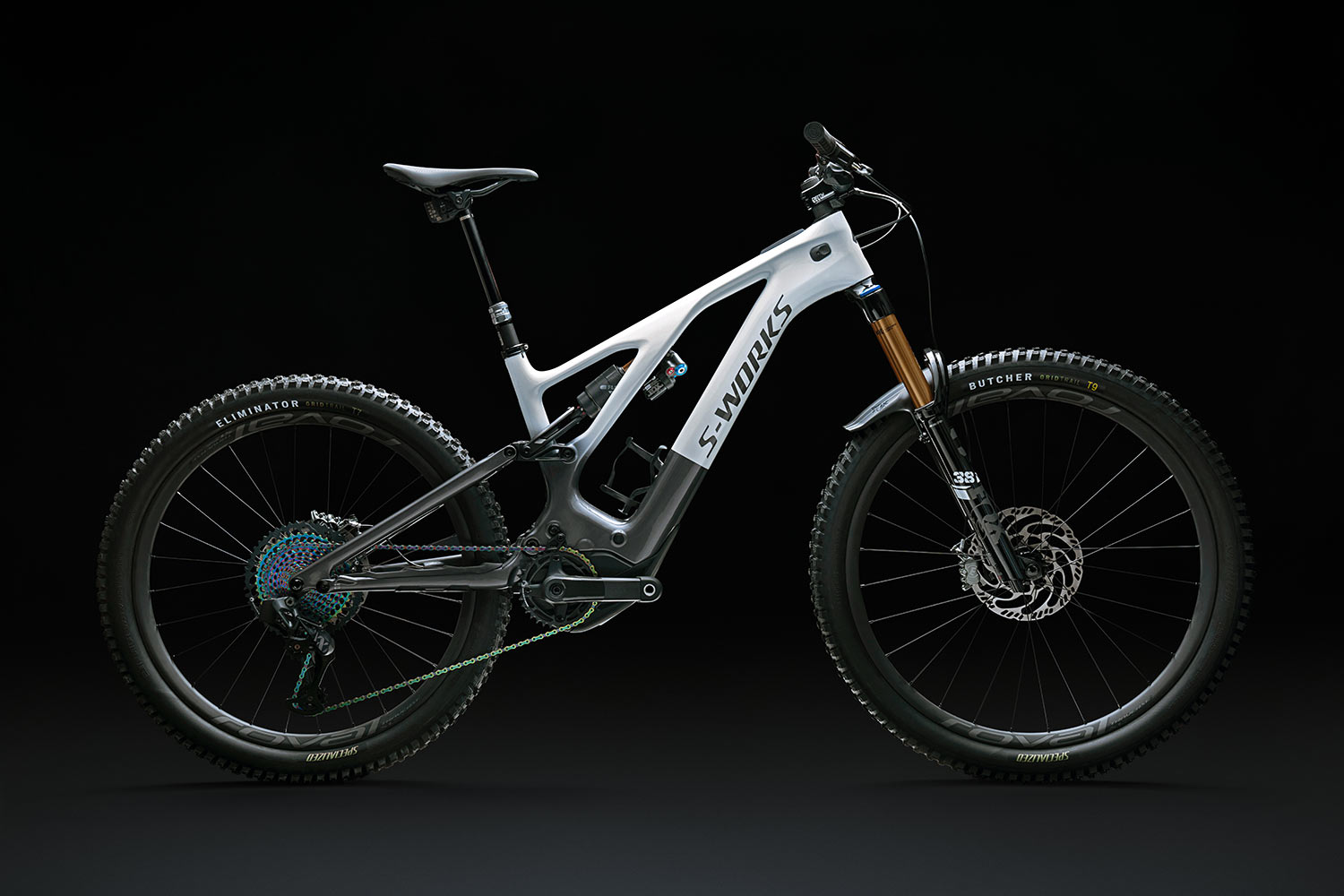 The new Turbo Levo v3 is a bike you buy because you want it and don’t care how much it costs, not because you can kinda make it work in your budget. Only two models are offered, the Pro for $12,000 USD, and the S-Works for $15,000 USD.

Let that sink in for a moment, then here’s the specs:

Click any image to enlarge. All photos c. Specialized.

There’s really nothing that’s not top notch on these bikes, with both models getting carbon wheels/handlebars/cranks, Fox Factory suspension and dropper seatpost, and their SWAT steerer tube tool. The S-Works model upgrades to lighter wheels and SRAM XX1 Eagle AXS with Magura brakes. 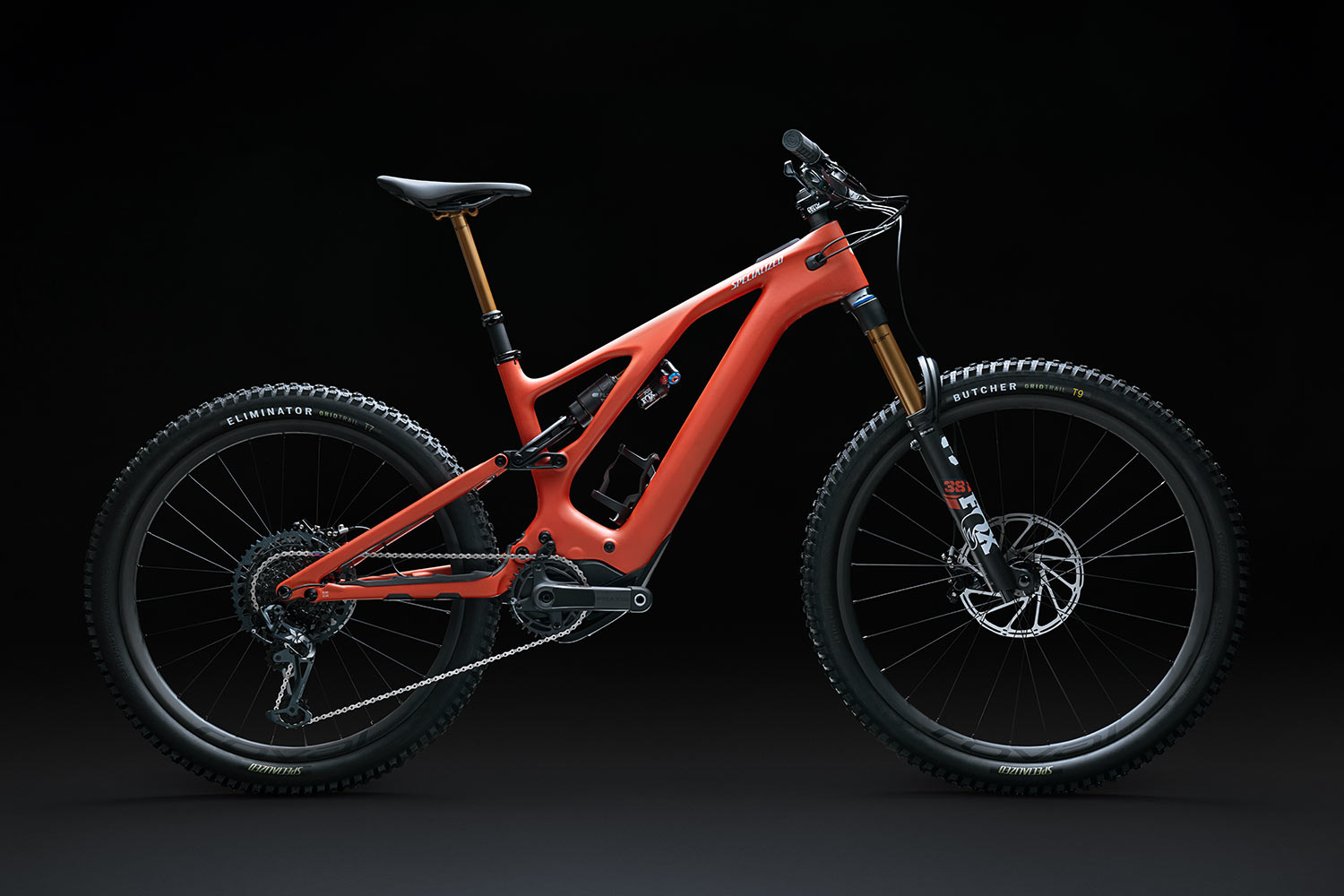 Stay tuned for our ride review and a closeup look at the Mastermind system, motor and more tech details…

More like granny smith apples to golden delicious apples.
Motors to Motors.
When can I get a Showa fork on an e-mtb ?

like anything, the value all depends on the person paying at the end of the day. Its not for me either, but comparing it to a Moto is silly, they aren’t the same. I get your point but its not logical. What they have here is the undisputed current king of eMTBs, with all the exclusivity that comes with a) Specialized b) Covid-economy. Guaranteed they’re sold out for the season on the 1st day. Whats expensive to you does not the market make.

if you ride it 5 times a week for 2 or 3 hours it probably makes more sense than a moto that you ride once a month at most. I dunno, chits expensive

I’m confused. Is this Bike Rumor or a marketing arm of specialized. I think 49 of the last 53 “articles” have been press released form one company in particular. At some point in time ya gotta say, ” I stufffed guys, come back next week when I’ve purged a little”.

“They say some past Levo motors had belt durability issues”

Understatement of the year.

IMHO, this is ridiculous. I own an eMtb, and would buy one again, but not for these prices. I probable wouldn’t buy the one I bought in October now due to large price hikes. What’s more, the tiny potential performance gains could only be realized by a very tiny segment of riders. If I were ridiculously wealthy, maybe, but otherwise there is VERY little value to justify. JMHO

Makes my Santa Cruz Bullit look like a bargain!