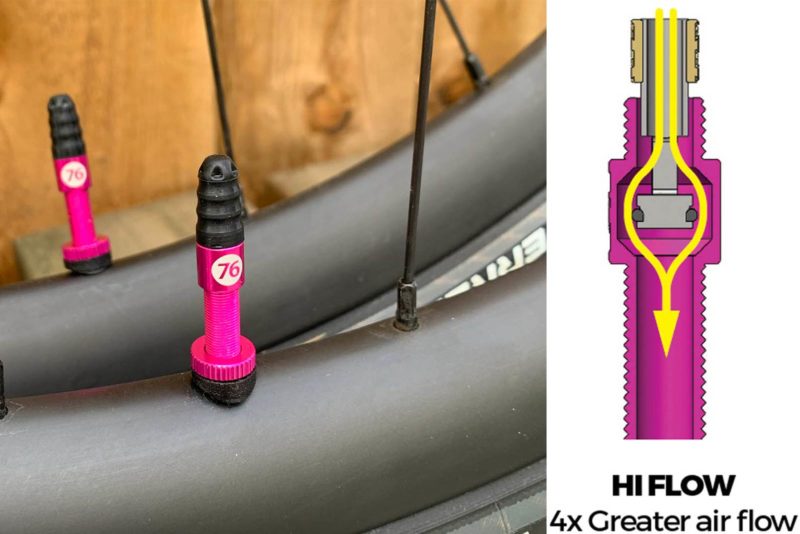 Before we get into it, let’s address the elephant in the room. Reserve recently released the Fillmore Tubeless Valve, a reinvention of the regular Presta Valve, adapted to increase air flow four fold. Not entirely sure how we missed this but, turns out that, several months ago, 76 Projects released their new tubeless valve that also offers 4X times the airflow of Presta. The two designs are very different, however, and it seems to me that 76 Projects’ offering is more compatible with tire inserts. Here’s all you need to know. 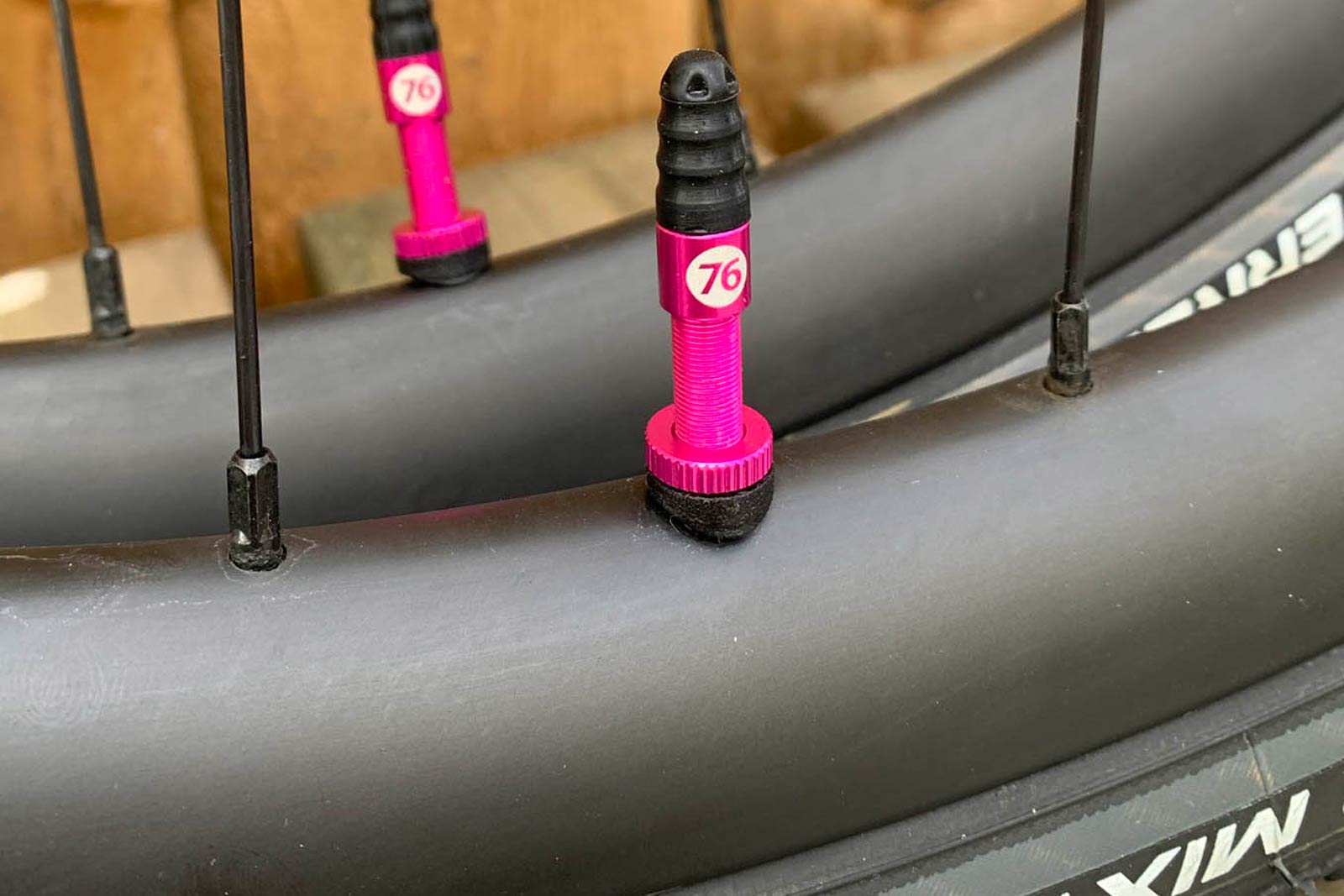 The 76 Projects Hi Flow No Clog Tubeless Valves are composed of a high precision CNC machined aluminium body with a stainless steel hollow core; a pair weighs a claimed 9g.

The Presta Valve has been serving riders of all kinds of bicycles very well for many, many years (probably since before you were born). With the almost ubiquitous uptake of tubeless systems, particularly in mountain biking, shortcomings of the traditional Presta design have been highlighted. The first of those issues is encountered when seating the tire on the rim. As the rate of airflow permitted through the Presta Valve isn’t all that high, you’ll often find you need to remove the valve core to inflate the tire in a rapid enough fashion that the beads will seat.

Secondly, there’s the Presta Valve’s tendency to clog up with sealant… only last week I had to use pliers to unscrew a Presta Valve clogged up with Slicy Banana Smoothy. My riding pal at the time also made use of them shortly afterwards for the very same reason.

So, how does the 76 Projects Hi Flow No Clog Tubeless Valve circumnavigate these issues? 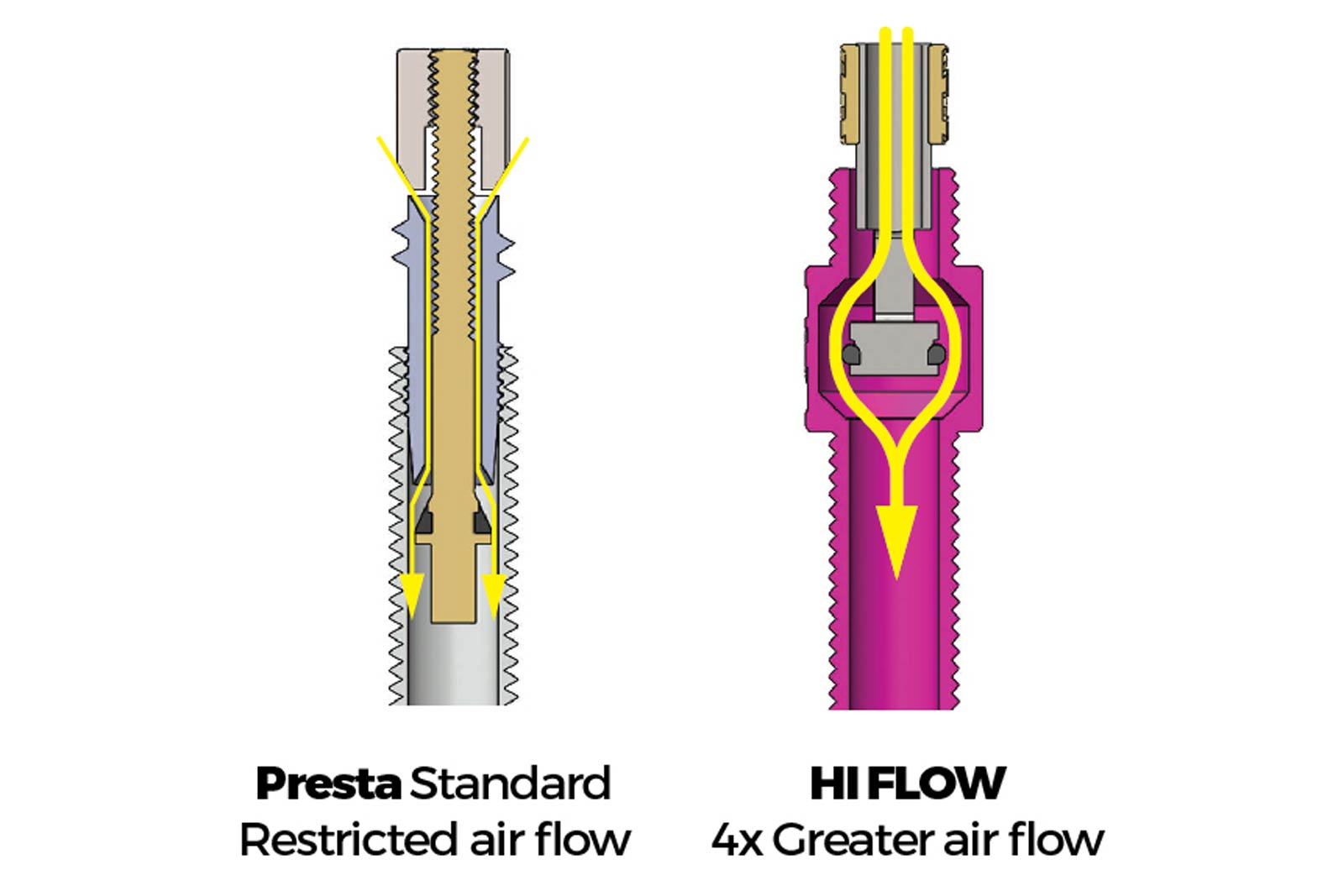 Like the Presta Valve, the 76 Projects offering runs a removable valve core, but key to this design is the fact that this one is hollow; air and sealant go through the hollow core before passing into the lumen of the valve stem and finally into the tire. It is the volume of the valve core that is responsible for the massive increase in air flow.

A key part of the design is that wider region near the top of the valve. Here, the external diameter increases to allow the internal diameter to increase. It is at the bottom of this wider area where the valve core seal sits; screwing down the valve core pushes its seal down against the region where the lumen begins to narrow again. Functionally, this presents a notable difference to the design of the Reserve Fillmore Valve, which seals at the very bottom of the valve stem, a feature that will likely make its use with certain tight fitting tire inserts such as CushCore a little problematic.

The higher volume design of the valve is responsible for it’s “No Clog” tagline. We don’t have exact measurements to share, but it’s clear from the following image that the hollow region within the valve core is fairly voluminous. Thus, the valve is said to be compatible with sealant injection systems like Stan’s The Injector. In the event that the valve does clog, the core can be removed for a thorough clean. 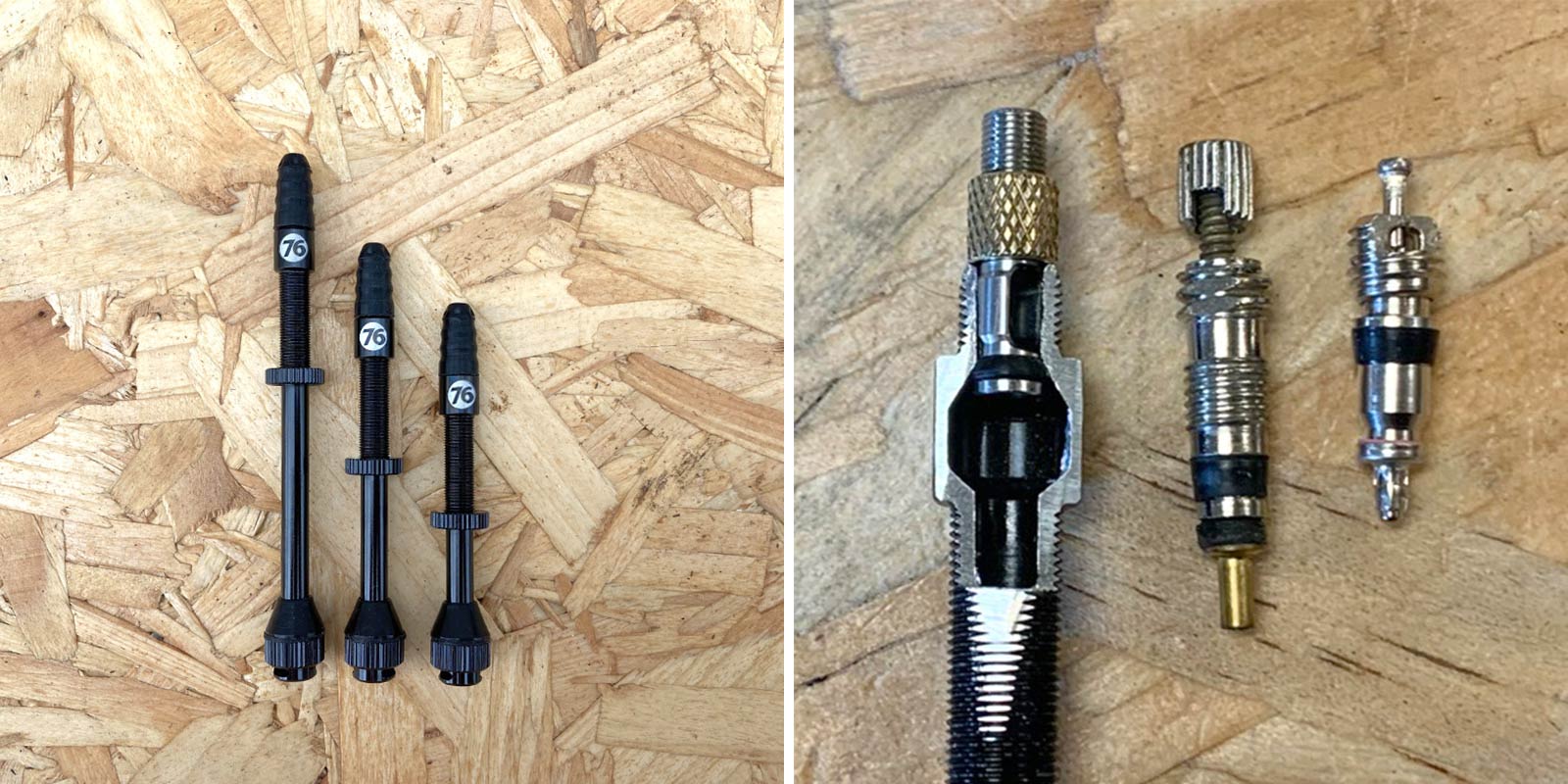 Left; the threaded portion of the valve is wider than the narrower non-threaded (externally) portion that passes through the rim hole – the two thread together just underneath the rim hole. Right; a cross-section of the 76 Projects Hi Flow No Clog Valve, next to the cores of a Presta and Schrader Valve.

With its larger external diameter, installation requires a few more steps than you’ll be accustomed to. Why? Well, to accommodate the wider stem, the 76 Projects Valve is actually composed of seven individual parts, as opposed to the four parts that comprise the regular Presta Valve.

As you can see in the following image, and in the installation video provided by 76 Projects, a base nut that sits inside the rim seals the valve from underneath, working in concert with the external lock nut that tightens the whole assembly from the outside. Note the bridged portion of the base nut – that should allow these valves to work seamlessly with tire inserts. 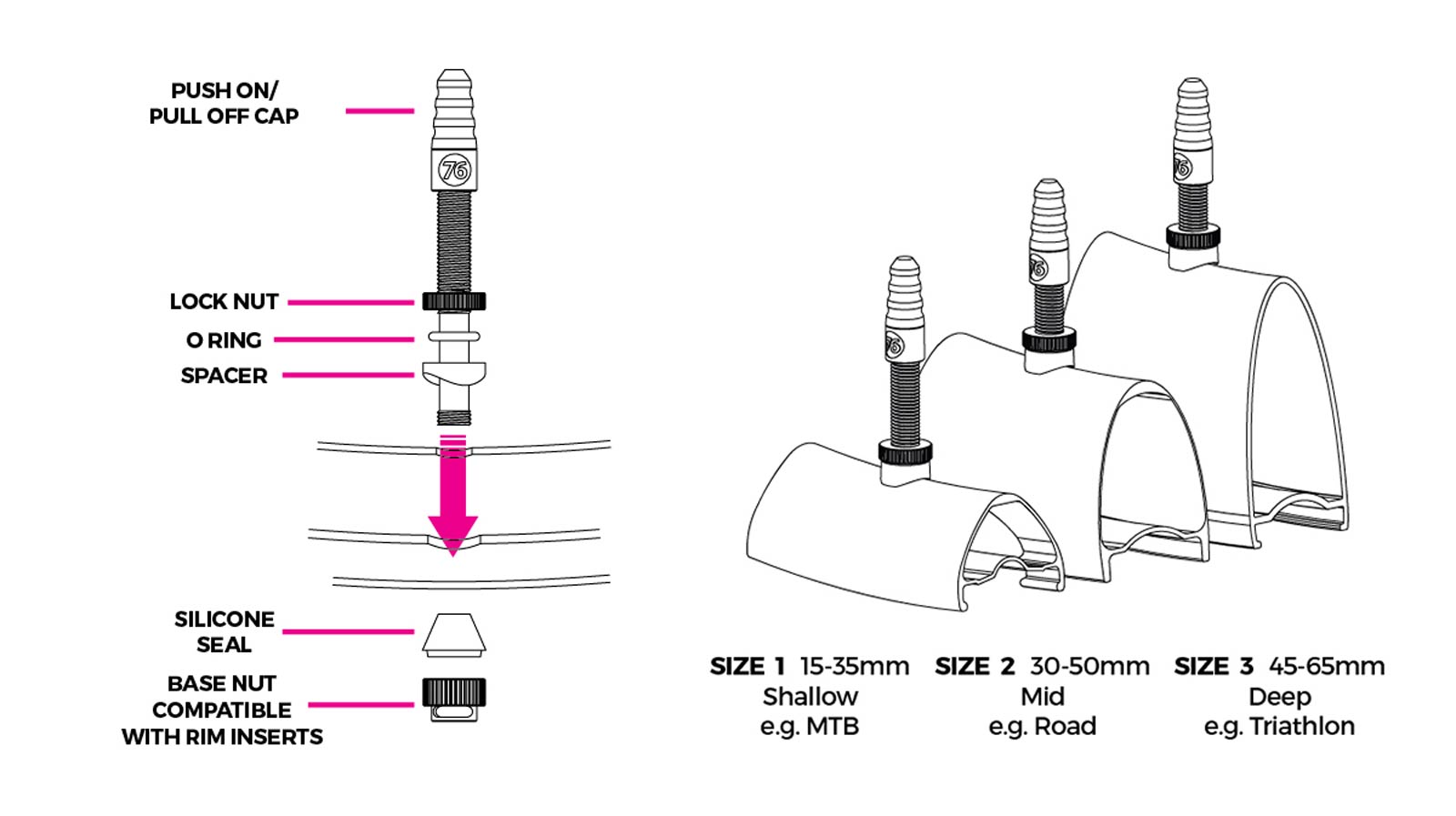 76 Projects offer the Hi Flow No Clog Tubeless Valve in three lengths to fit rims of different depths; 15-35mm for shallow MTB rims, 30-50mm for deeper road rims, and 45-60mm for more aero rims like those used for triathlon – ranges are quoted here as 76 Projects can supply spacers to allow the valves to work with different rim depths.

The valve is optimised to work with push-on pumps, though 76 Projects do provide an adapter for use with screw-on pumps.

What do you guys think? Is the 76 Projects offering better or worse than Reserve Fillmore? Let us know in the comments.

The 76 Projects Hi Flow No Clog Tubeless Valves are available now, directly from 76 Projects, retailing at £24.50 per pair. Get them in Black or Magenta.

Isnt this the same valve?

The fact that this valve doesn’t work with most pumps or pressure gauges makes it less ideal. Plus, modern day sealant seals up to 6mm-8mm holes. So, I’m not understanding how they can claim “No Clog” if their valve stem is exposed like that. This valve is guaranteed to clog…..

Installed Reserve yesterday. Not saying it will be this easy for every rim/tire combo but I was able to seat my tubeless tires with a standard floor pump. Happy so far. At a glance, 76 looks to have similar flow capacity from valve size and design but with different location of seal that keeps compressed air in. Their seal is within an enclosed chamber on the stem and Reserve’s is visible at the tire end of the valve. To me, it looks like the Reserve would be easier to clean/service in case the ‘paint’ were to dry. But, it could be that both of these valves have large enough volume to possibly never need any service –time will tell. 76 currently has better price tag and stem length options for sure. Glad to see both of these iterations. Old presta design required too much maintenance and would sometimes delay race prep or prevent a post burp refill.

Perfect! Another company fixing the problem that I have never had with any other vendor! I love options.

How does this claim “No Clog” when the valve stem is exposed to sealant? Plus, it’s kind of a deal breaker that it doesn’t work with most pumps or pressure gauges

Meanwhile Schrader has been around forever, definitely allows for better air flow than any fillmores or this, and has next to no downsides. 2mm in diameter hardly makes a difference on today’s rims.
I personally haven’t had a real problem with Presta, but they still annoy me working with them daily and I see literally no credible benefit to presta even after a bunch of research. I appreciate that presta as is isn’t ideal for tubeless on MTB, but why not use the solution that’s been around for ages, is universal from cars to rear shocks and just about anything else.

The presta valve was probably invented around 1890 or so. I doubt anyone remembers back that far.

Why not just use Schrader valves? They are more robust and very simple valve caps are available to remove the core…

I’m trying to figure out the demand for such a product. What’s the rush for filling bike tires? Is this valve going to make more air come out of the tiny handheld bike pumps? How often are people filling their bike tire thinking, “man, if only this valve allowed more airflow…”?

Will it work with Quarq pressure reader?

To that, when Presta was being used (on tubulars) “Sealant” was not even imagined yet.

So you have to take the tyre off if the base nut needs tightening? Sounds messy

Hate presta vslves. The bane of urban cycling. Hit ine one with a rock or limb. They bend they break they leak. Useless. Totally useless.

The higher airflow is specifically for tubeless setup. To properly seat a tubeless tire, you want a huge volume of air entering through the valve, through the rim, and into the tire.

Inflating a tubeless tire after it’s fully seated is identical to how you would inflate any other tire.

I love how they put the “No Clog” in quotes. It’s like them saying yeah we know it’s gonna clog. Doesn’t take much of a genius to know that their cavities gonna collect the sealant gunk. Sealant’s like a slim when it starts to solidify and the solution shown here is a worse than a straight stem Presta. And we all know how shitty Prestas are

No Fillmore or 76 will allow more airflow than a presta without a core… easy peasy!

As an engineer, I was curious to see the flow measurements through both valves. So, I hooked a flow meter to the new Fillmore and then the 76. It’s interesting because even though 76 advertises more flow, Fillmore measures higher at the same pressure. SCFH changes with pressures because air is not an incompressible fluid. So, I guess when they claim 4x the flow what pressure are they referring to? Or are they just talking about cross section area?

@Jburns I snapped a presta valve once when I was about 16, wasn’t supporting the head of my frame pump properly. I’m 48 now and haven’t broken one again since, despite being a bike commuter daily for all except a 4-year period in that time, and running presta valves on my commuter, road and mountain bikes.
I think you’re overstating the problem.

I bought a pair and do have one pump it works with. That is where the pluses stop. I can use the gauge on that pump for my gravel bike since the pressure is high enough. My fat bike is another story. Now I’m going to have to pull the valves since I have no way to get a low pressure gauge to work with them. Fixed a problem I never had and created a problem I now have and it’s a critical one.