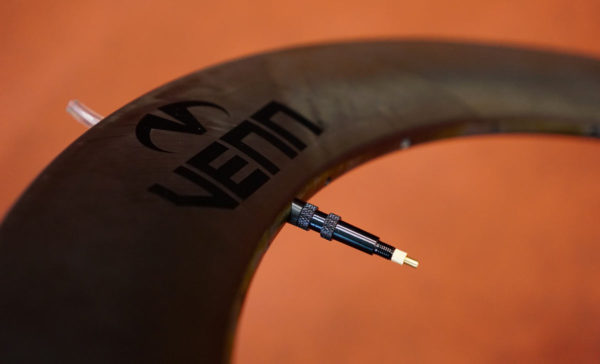 If there’s one component on your bike that hasn’t seen much innovation over the years it’s the humble valve stem. Not that it didn’t need it, but with so many off the shelf options available, wheel manufacturers simply had to spec something that met their cost requirements and matched their rim bed’s shape close enough. There was little impetus to fix something that didn’t seem broken. But, when we need things like compressors and 160psi auxiliary chambers to blast enough air into our tires to pop them into place, perhaps things were “broken”.

Fortunately, our friend Wayne at Legion saw the opportunity and came up with a unique design that more than doubles the amount of air that can flow through the valve stem. And he claims this new design will let you seat a tubeless tire with any standard floor pump… 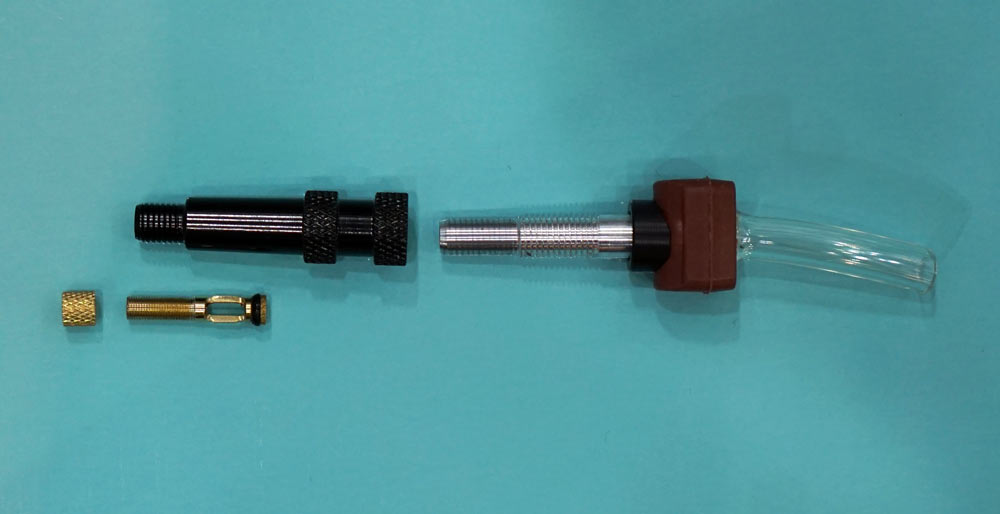 The new Legion VMAX tubeless valve stem replaces the traditional core with a hollow one that opens up to two large cutouts inside the stem. The nut on top threads up to allow it to press down and create an open airway. Thread it down and it pulls it up to close off the system. A rubber seal at the bottom prevents air from leaking out, and when the tire is inflated, that internal pressure pushes the core upwards to maintain the seal until you (or your pump) presses it down. Basically, it’s the same way a normal Presta valve stem works, but this one has a MUCH bigger airway. Here’s a look inside: 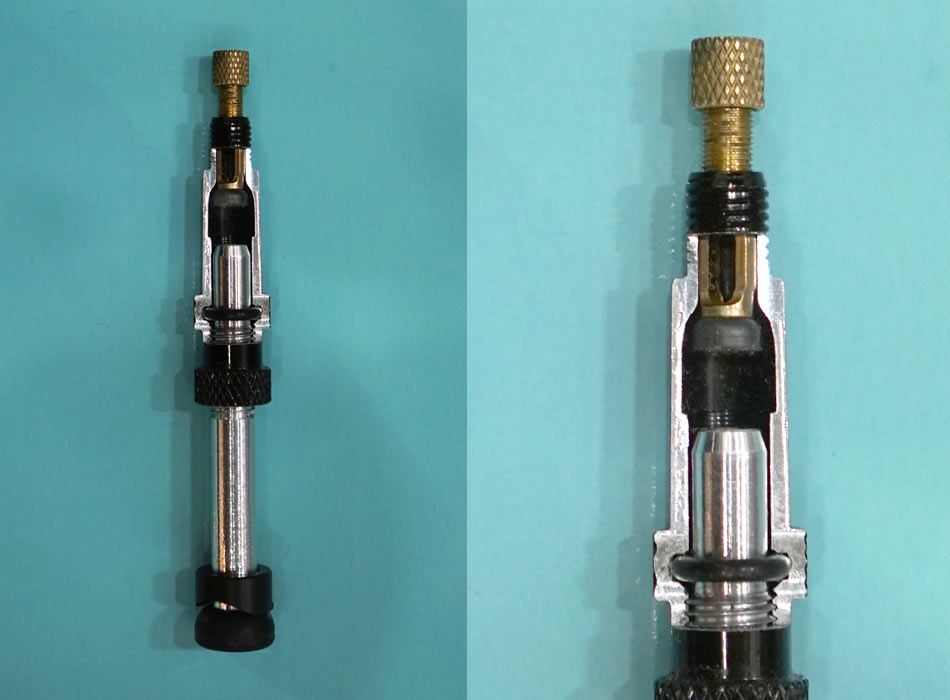 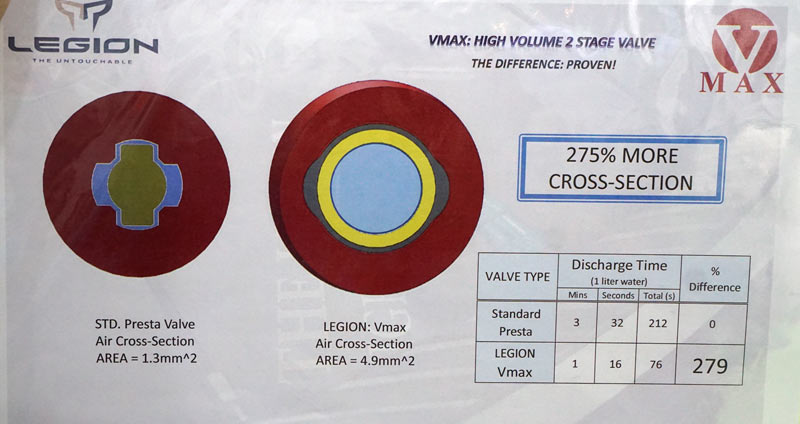 Wayne tested them to prove the difference, showing a 275% improvement in air flow. So, basically, these valve stems allow almost 3x the air volume to move through them, so you no longer have to remove the cores to try to maximize flow. Which means once you do seat them, they’ll stay inflated. 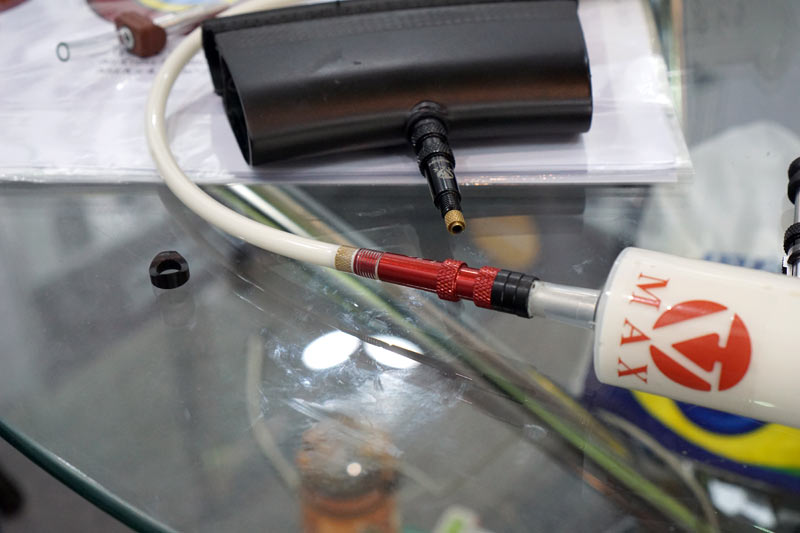 Wayne says you’ll be able to seat normal road tubeless tires (and gravel, cyclocross, and some smaller mountain bike tires) with a standard floor pump now. Large volume mountain bike, Plus and Fat Bike tires might still need a bigger push, but there’s other reasons to use them for MTB.

The design leaves a small tube attached to the backside, which keeps sealant from settling into the valve and clogging it up. And, at least for road bike tires, it should allow you to use a syringe to check sealant levels. The larger opening also means you can easily add more sealant without having to remove the valve core.

Retail should be about $30 for a set, and they’ll include small covers to keep crud from getting trapped in the core’s air passage.

what is this title lol.
you can remove the valve core of all tubeless valves and get more airflow than this, yet not all tire will seat with a floor pump connected (granted that you have the right adapter

so.. current valves are TECHNICALLY MUCH SUPERIOR and lighter, less complicated, not to mention cheaper. lol. wtf.

Yeah, that’s really where they lost me. The size of the rim hole hasn’t changed, and typical valves have a thin wall already, so the potential air flow is the similar. Perhaps a schrader rim hole with a presta valve and internals would give the best of both types.

I don’t understand how this can work better than a presta valve without a core. I do like the modular design, as it’s likely easier to clean.

With hard-to-seat tubeless tires the problem is not air flow, it’s the fit of the bead within the central channel of the rim.

That small tube is quite tall isn’t it?

It can be pulled off if you do not anticipate the need to suck up the sealant, and it is otherwise meant to be trimmed to your specific tire size so that the tube is submerged in sealant, without touching the tire, when the wheel is at its lowest position.

What about pumping op your tires without a valve core inside of it. As long as they seat first. You can pump it back up later.

I wish this company luck and I hope this product stirs up other inventors to design better valves. (And check out the Legion website – they have a very good sense of humor!)

I’ve never had an issue seating MTB tires with a floor pump… Only once have I had to pull the valve stem to get more air flow. Too many products are coming out that fix non-existent problems.

Unfortunately Wayne should’ve done his due diligence more thoroughly when searching for a name. EMC has used VMAX for their high-end enterprise storage products for years.

Entirely different trades so I don’t see the problem?

V-Max is a motorcycle too…so what. I get the feeling no consumers will be led astray by the name.

Yamaha VMax motorcycle. Again, different trades, and obviously not trying to capitalize on the other’s rep.

Appears to be a larger diameter than a standard presto valve, will it fit into a presto sized hole on your rim?

Yes, they fit normal holes. I am currently using some on my test wheels and they work beautifully.

Time to invent a large inner diameter valve stem that has an easily replaced inner valve. One that you can remove with very common tools and find at any automotive store… Well name it The Shredder Valve! 😀