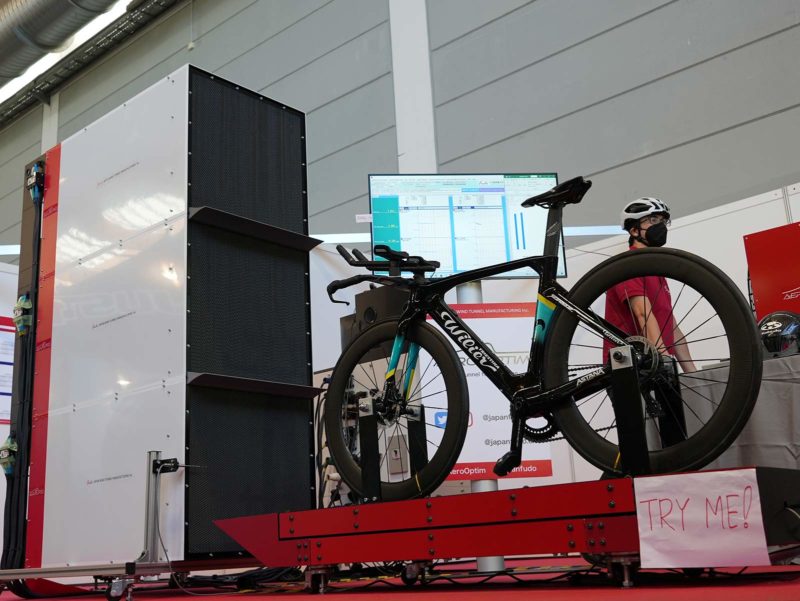 If you’re down to the last frontier of turning cash into a marginal gains, the Aero Optim miniature, modular wind tunnel system is for you. Comprised of 27″ x 27″ x 57″ fan blocks, a strain gauge platform, and the control station and software, you can build it only as small or big as you need it… 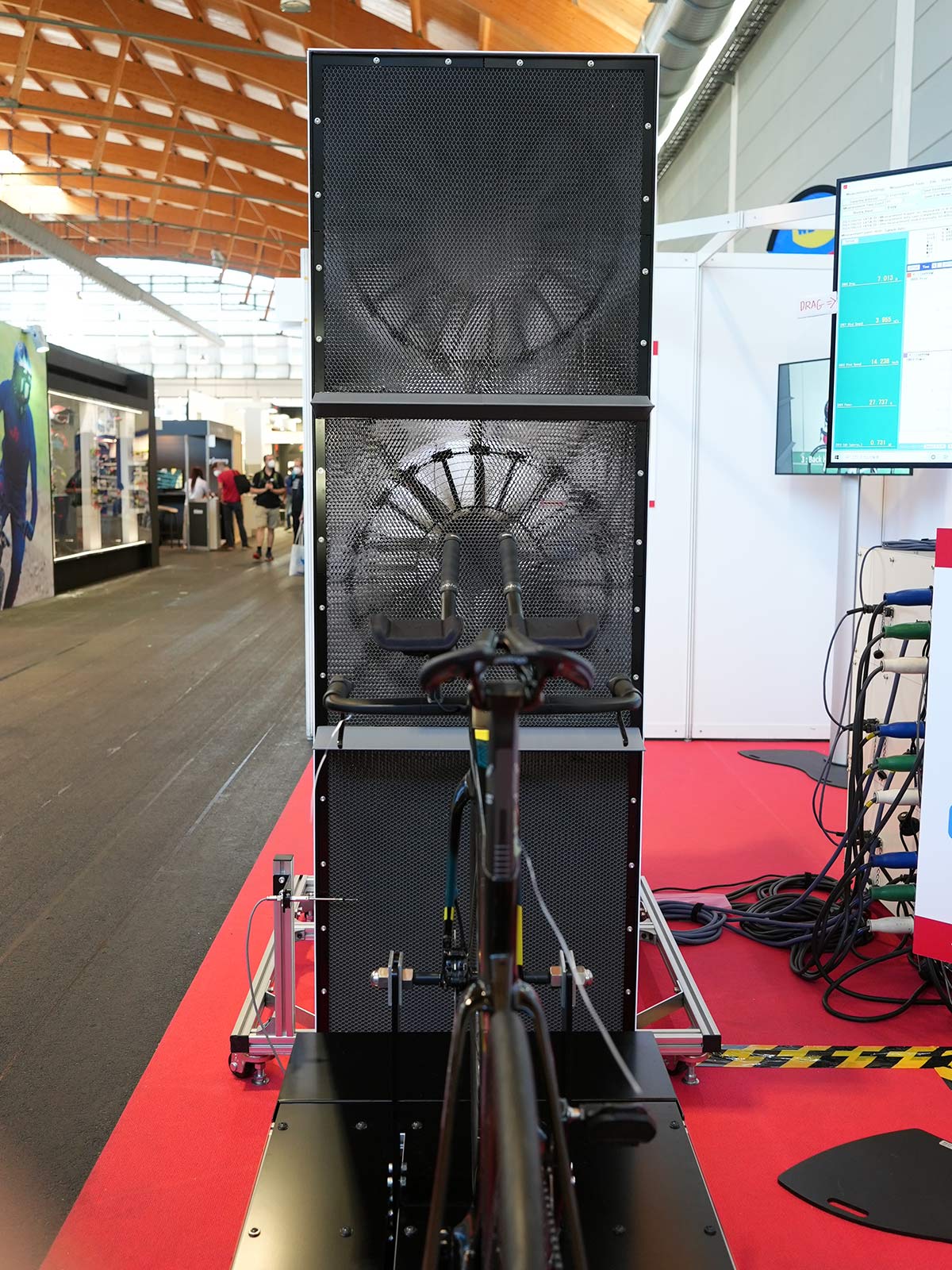 Designed and built by Japan Wind Tunnel Manufacturing, the Aero Optum system is an open-air wind tunnel that has the same air flow controls as a large scale, fixed tunnel. The fan is situated between grates that diffuse and straighten the airflow, normalizing the breeze across a space nearly equal to its footprint. 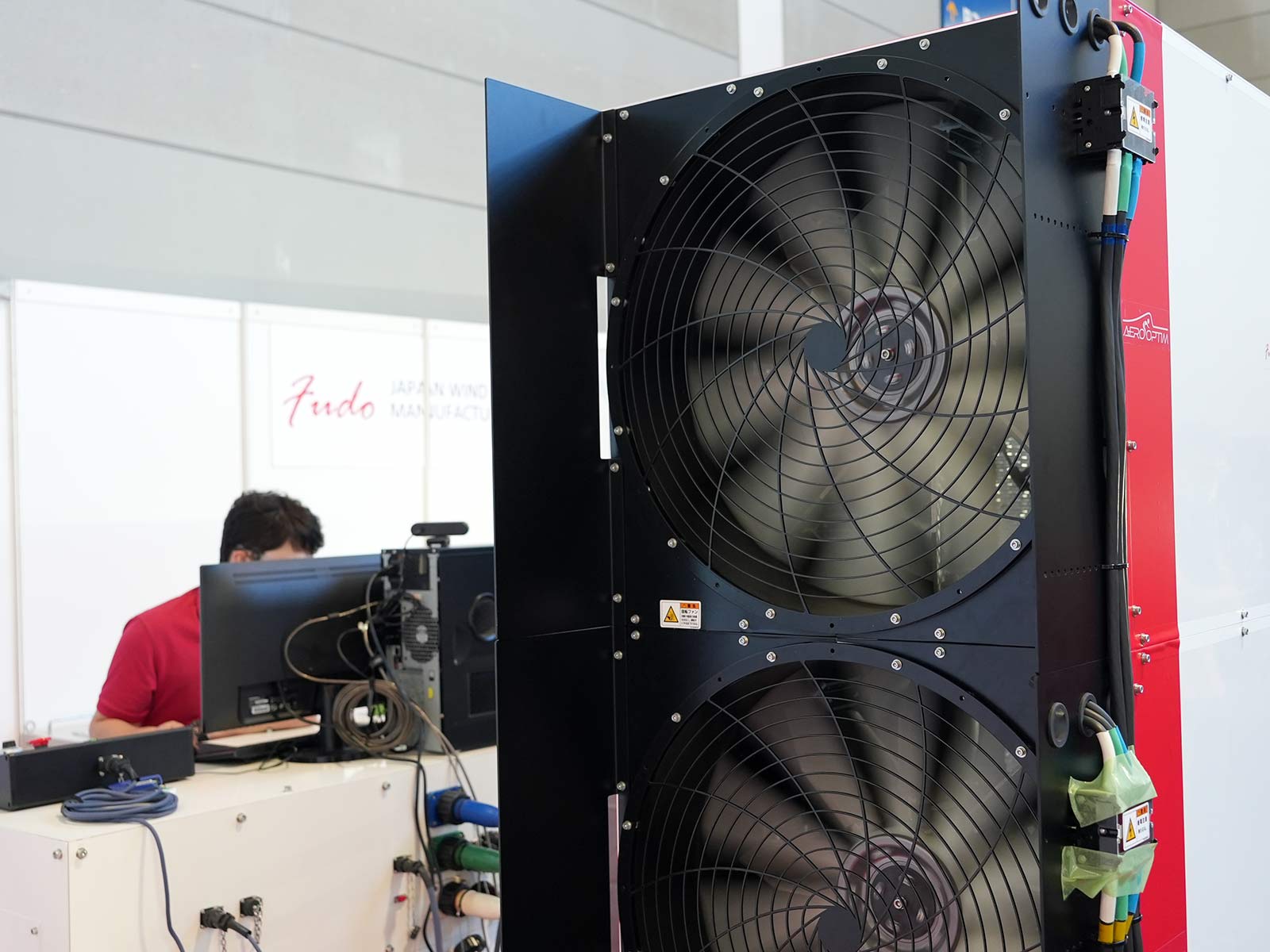 Meaning, if you have the three fans stacked as shown here (which is what they recommend for testing a single rider on a bike), you’d end up with a roughly 2′ x 6′ river of air flowing over you. 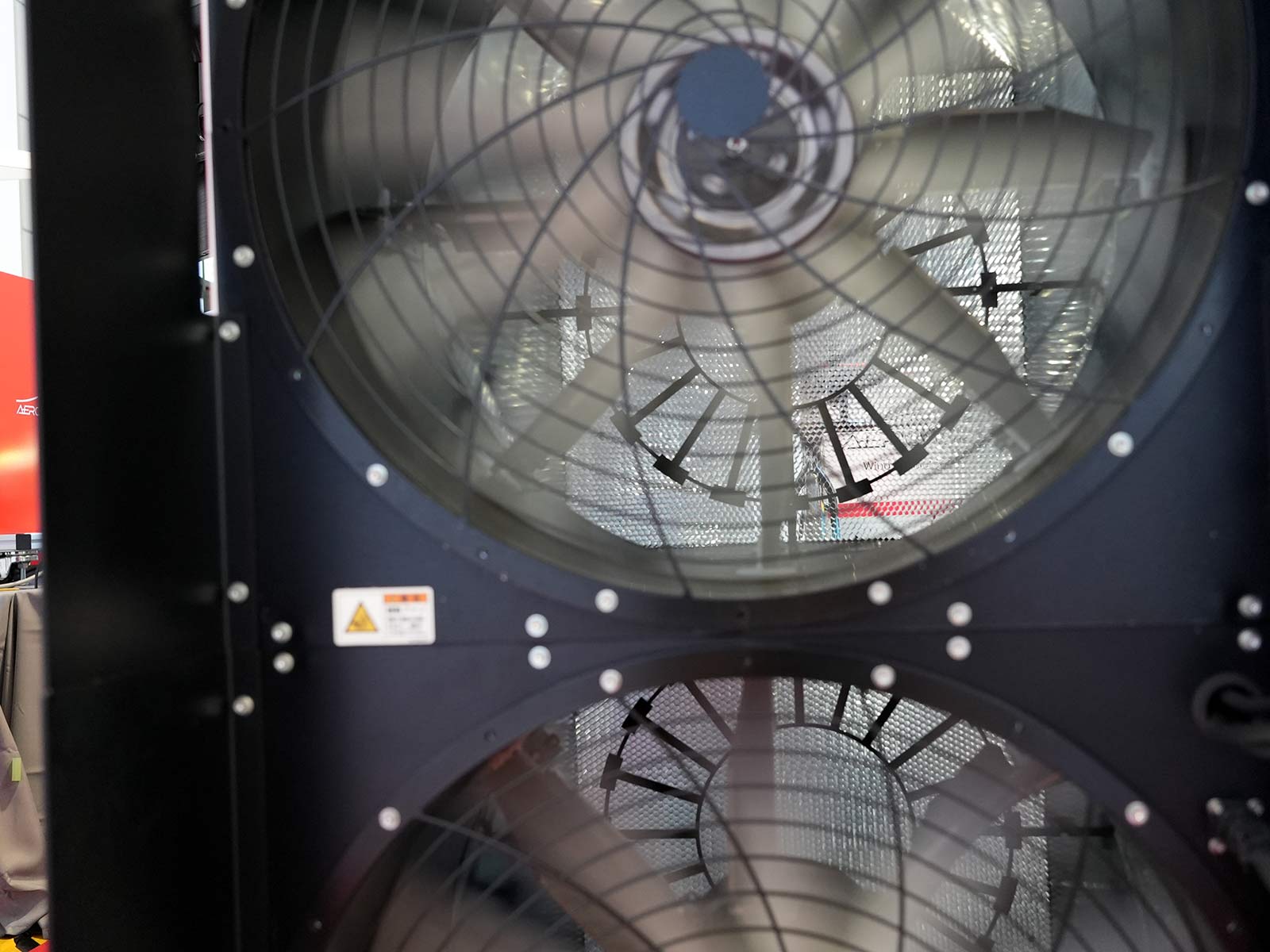 The fans can blow from 3.6km/h (2.2mph) up to 54km/h (33mph), simulating the full range of normal riding speeds. And, since they’re controlling it’s flow, they say wind speed is consistent across the entire cross section, like it would be out in the real world. 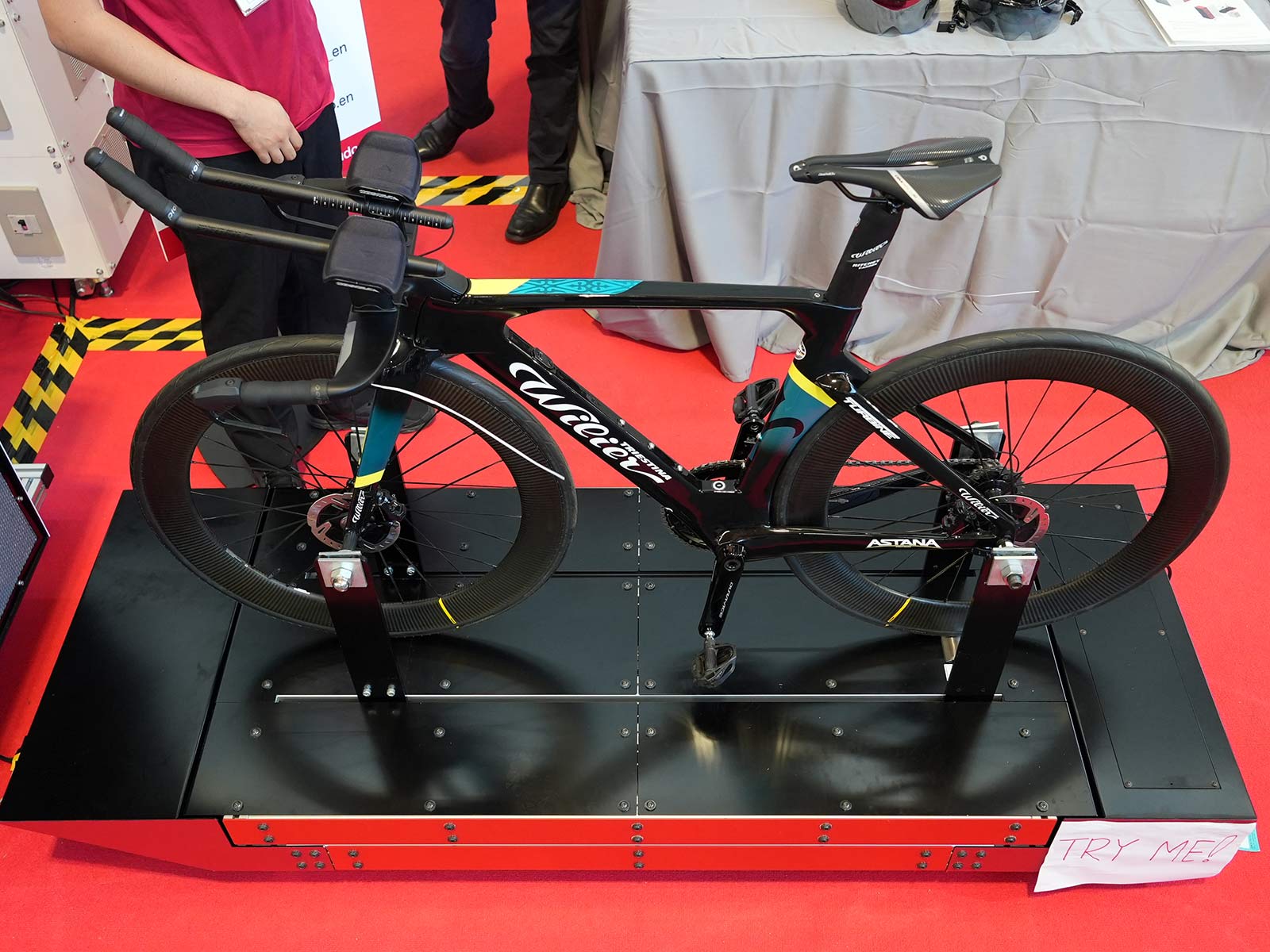 Getting the wind is only part of the package. You need to be able to measure the drag, and that’s where their strain gauge platform comes in. They say it’s strong enough to handle full power sprints, yet sensitive enough to detect changes as small as changing your jersey. 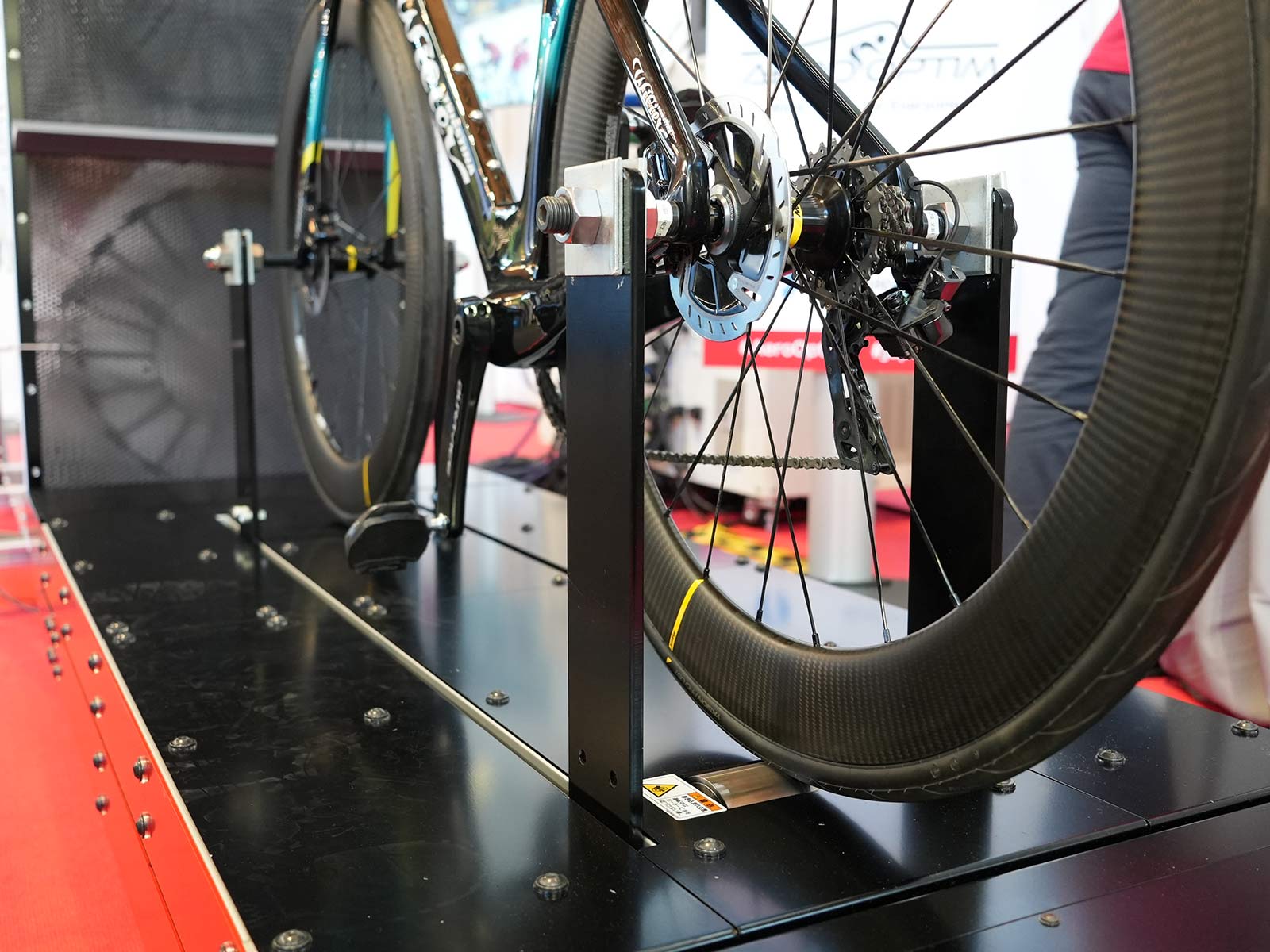 Equipped with axle mounts and a roller, it lets you sit on the bike normally and pedal. To measure your drag, you hold a position (pedaling or not) for 10 seconds while someone starts the test. 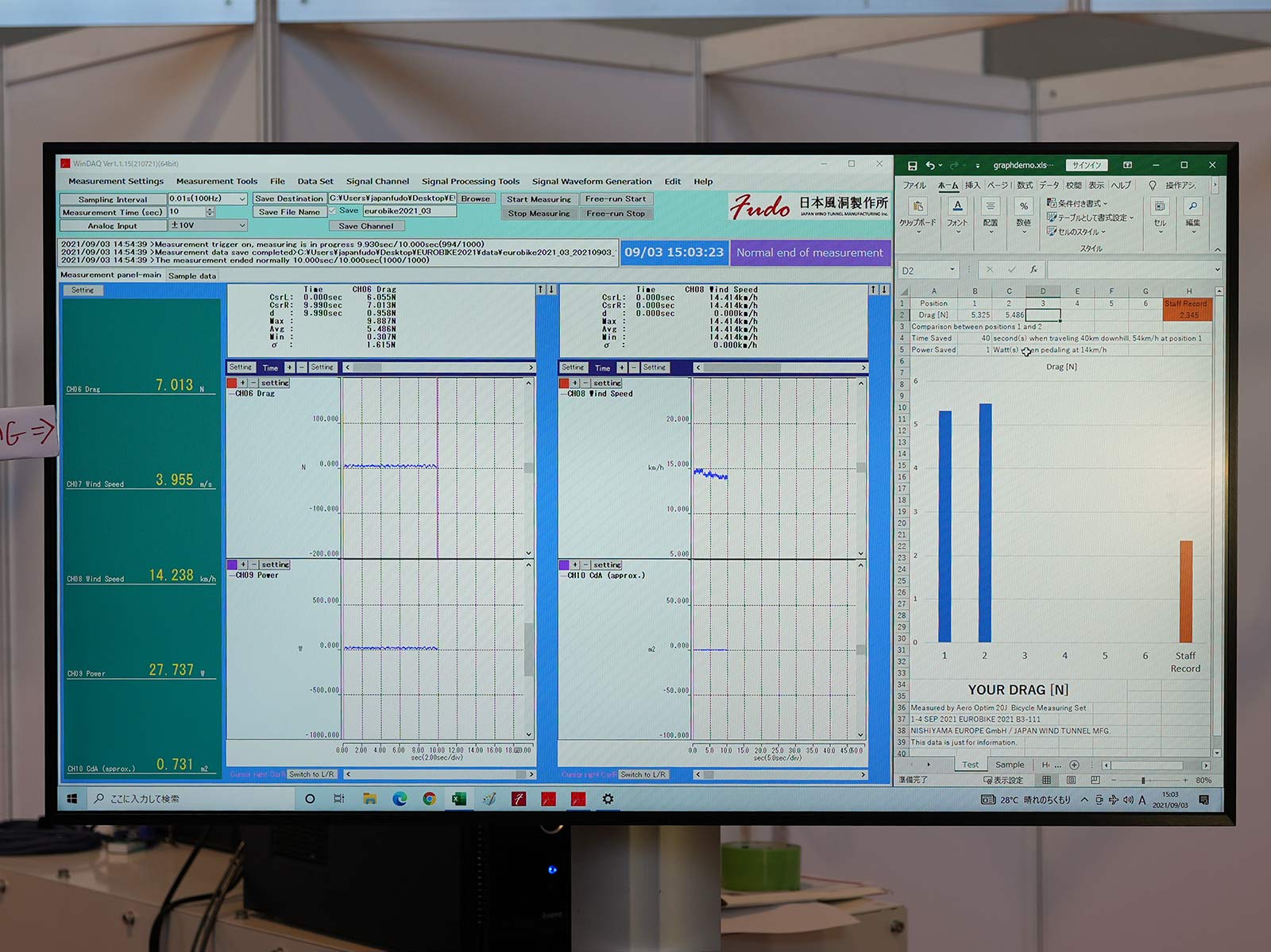 For reference, I sat on it in normal clothes with hands on the hoods and logged ~5.4 N, then rested my elbows on the aero drops and it dropped about 20%…which is a huge gain. 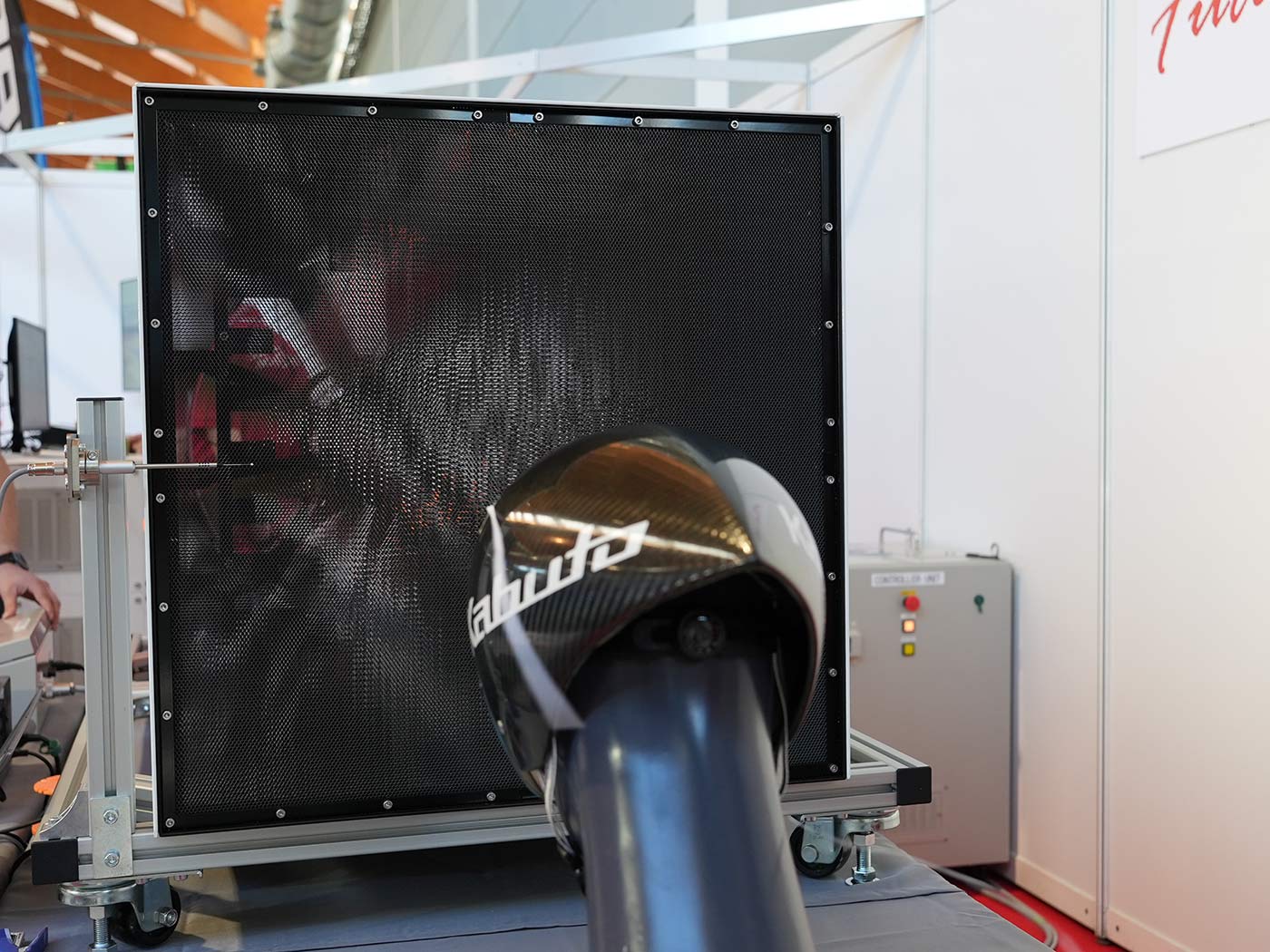 Since it’s modular, you can piece them together as needed, or just get one for small parts testing…though you’d still need some way of measuring drag if you wanted hard numerical data.

The setup shown with the full bike would retail for €220,000 (about $261,000 as of this story going live),  excluding the bike. You’ll also need a bit of space for it, as they recommend at least 3m behind and beside it, a 4m ceiling height, and 5m distance in front of the fans (where the bike is).

While the cost and space makes it a bit impractical for most, we could see some bike shops in triathlon-heavy and affluent markets being able to amortize this into their business model. Regardless of whether it’s as accurate as a normal wind tunnel, the data is still valuable for anyone trying to optimize their bike setup, kit, and riding position. Or just have a cool story to tell after they’ve run out of ways to bring up their Ironman race.

A bit too expensive for my zwift setup.

After doing my first triathlon I can see the benefits here. My ride was slower than I hoped for and I might be able to refine my position and helmet choice with something like this.