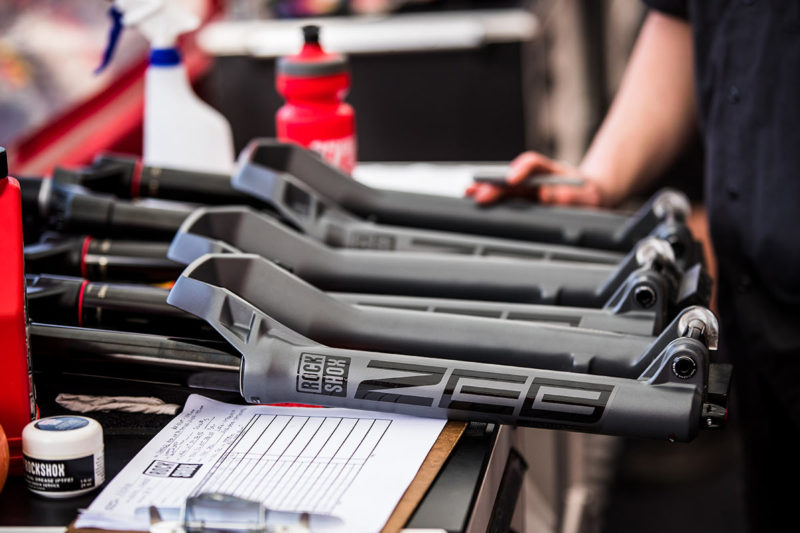 Built for the roughest enduro stages and the biggest e-mountain bikes, the new Rockshox ZEB is their biggest single crown fork yet. Boasting 38mm stanchions, a sharp new crown and arch design, and oversized details, it’s designed for riders who want to push the limit without pushing around extra pounds.

Indeed, for its size, the new ZEB is relatively lightweight. Coming in just a couple hundred grams (less than half a pound on average) heavier than a comparable Lyrik or Yari, it gains stiffness without gaining much weight.

With 160mm to 190mm of travel, an angular design, and multiple crown- and steerer diameters to fit oversized eMTB designs and more, the ZEB is their answer to long travel, single crown forks for the biggest, baddest trails. And, you know, that new Fox 38 fork… 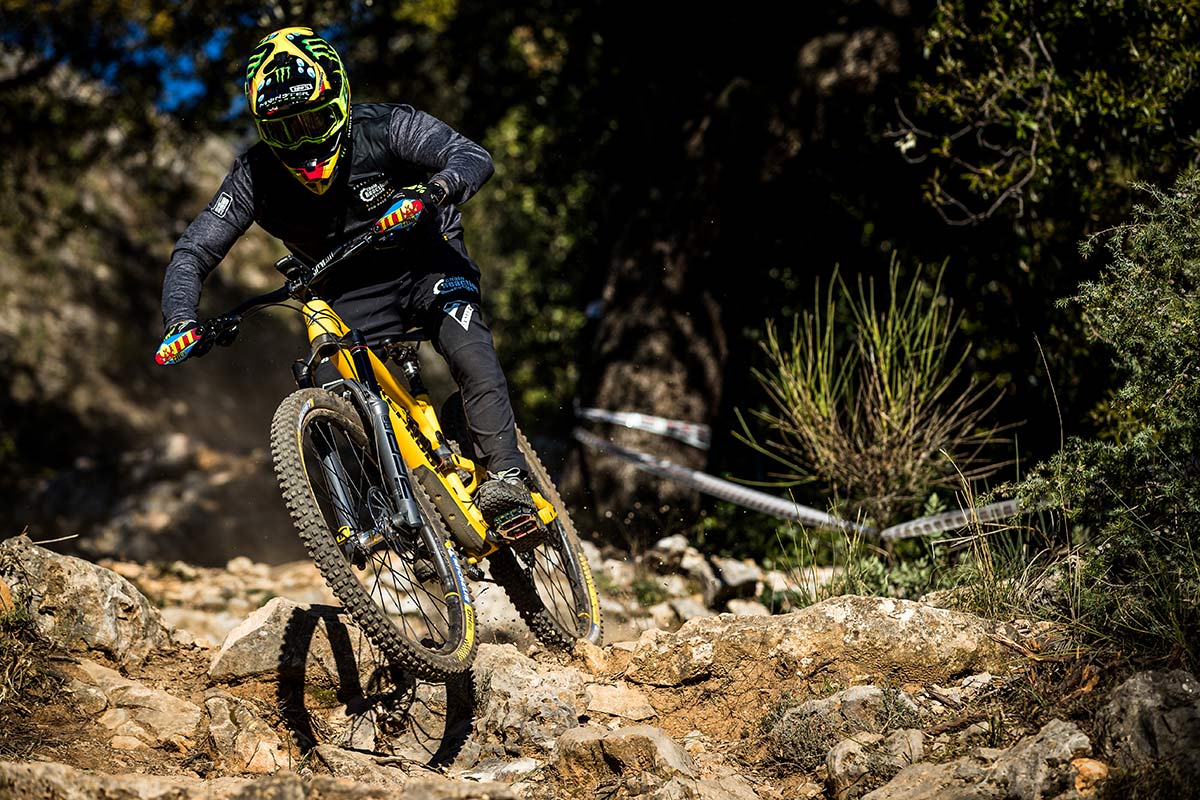 Based in Colorado Springs, Pike’s Peak is in Rockshox’s backyard. American explorer Zebulon Pike first attempted to summit it in 1806, and, well, they’d already used the name Pike. So, ZEB got the nod as the fork that could tackle Pike’s Peak’s rocky, high-speed, death-defying 7,690-foot singletrack descent.

OK, how does it compare to Lyrik? 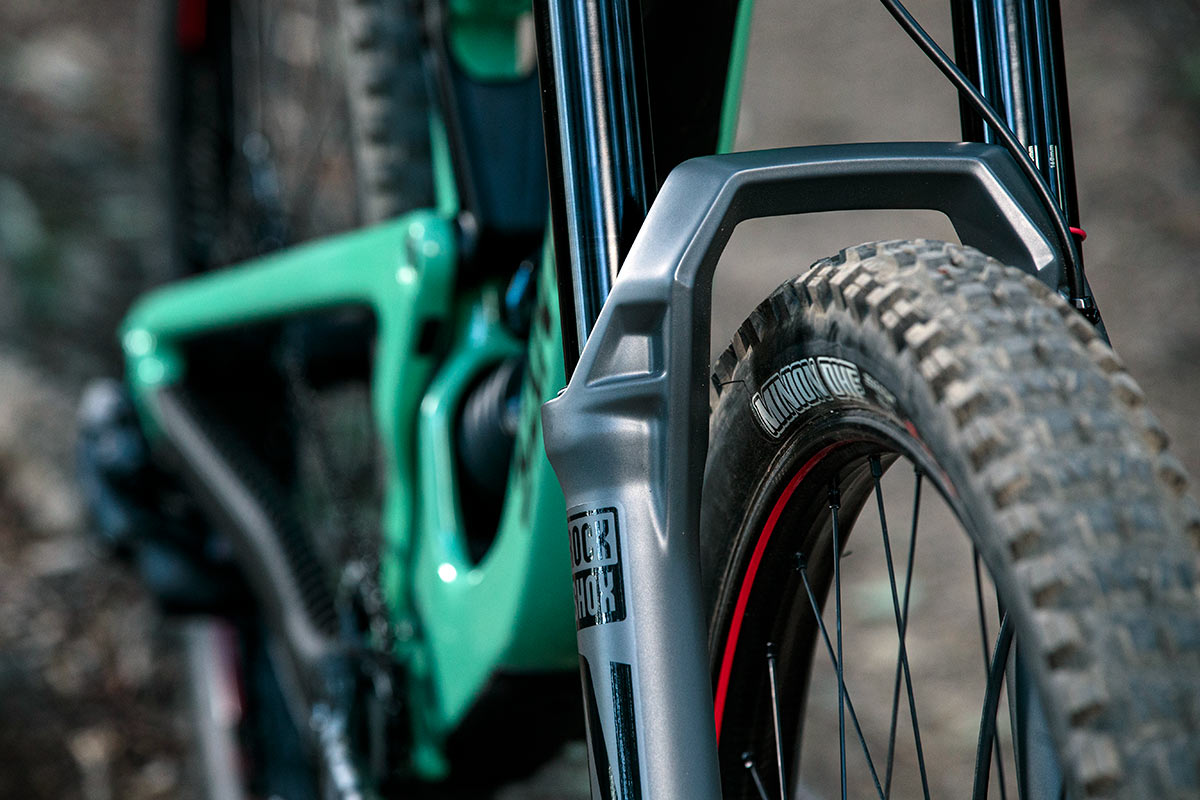 The Lyrik, Yari and Pike forks all use 35mm stanchion diameters, but the ZEB gets 38mm alloy upper tubes. These, along with the design of the crown and lowers, gives the ZEB:

If some of those differences seem less than dramatic, that’s be design. Rockshox says the most important number was torsional stiffness, which improves steering precision. The others were reigned in so that the fork wouldn’t feel too harsh. 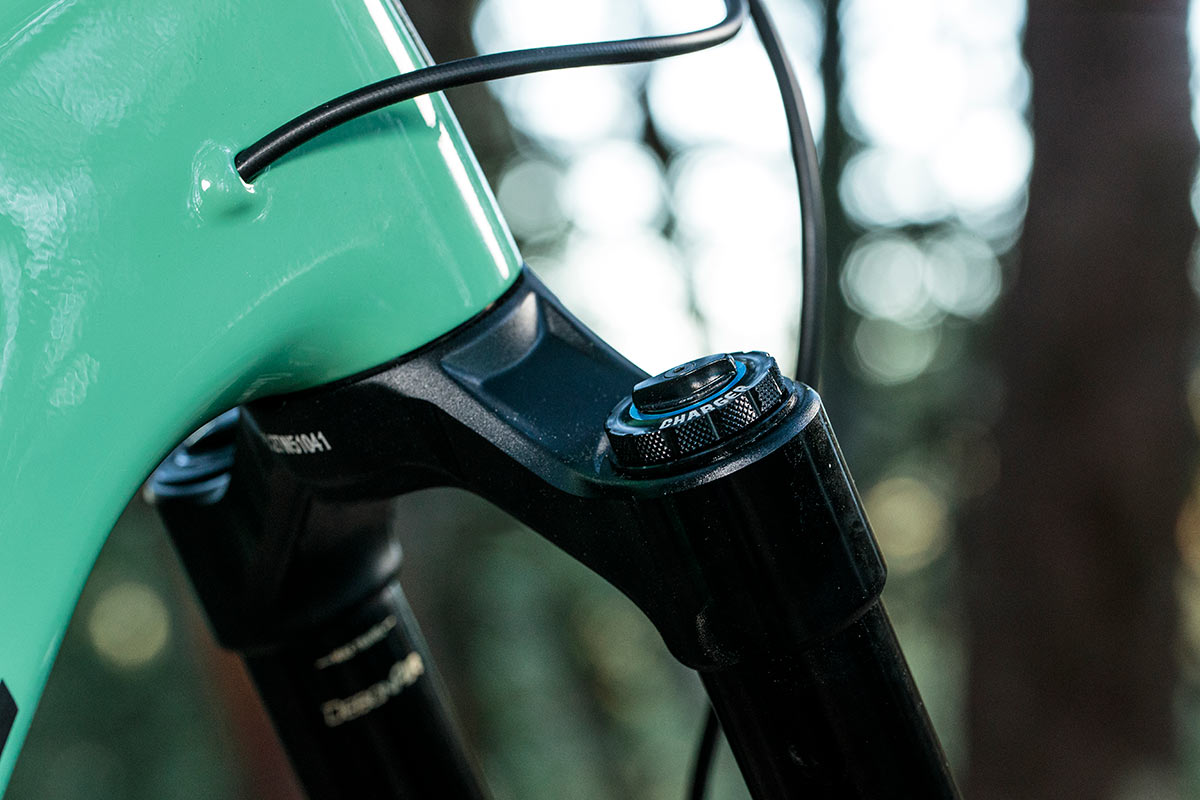 The arch juts out slightly more, which helps it clear larger diameter headtubes. That’s good for e-bikes and more robust enduro bikes that are getting bigger tube sections to handle the extra stresses riders are placing on them. It also provides more clearance when using their bolt-on fender. 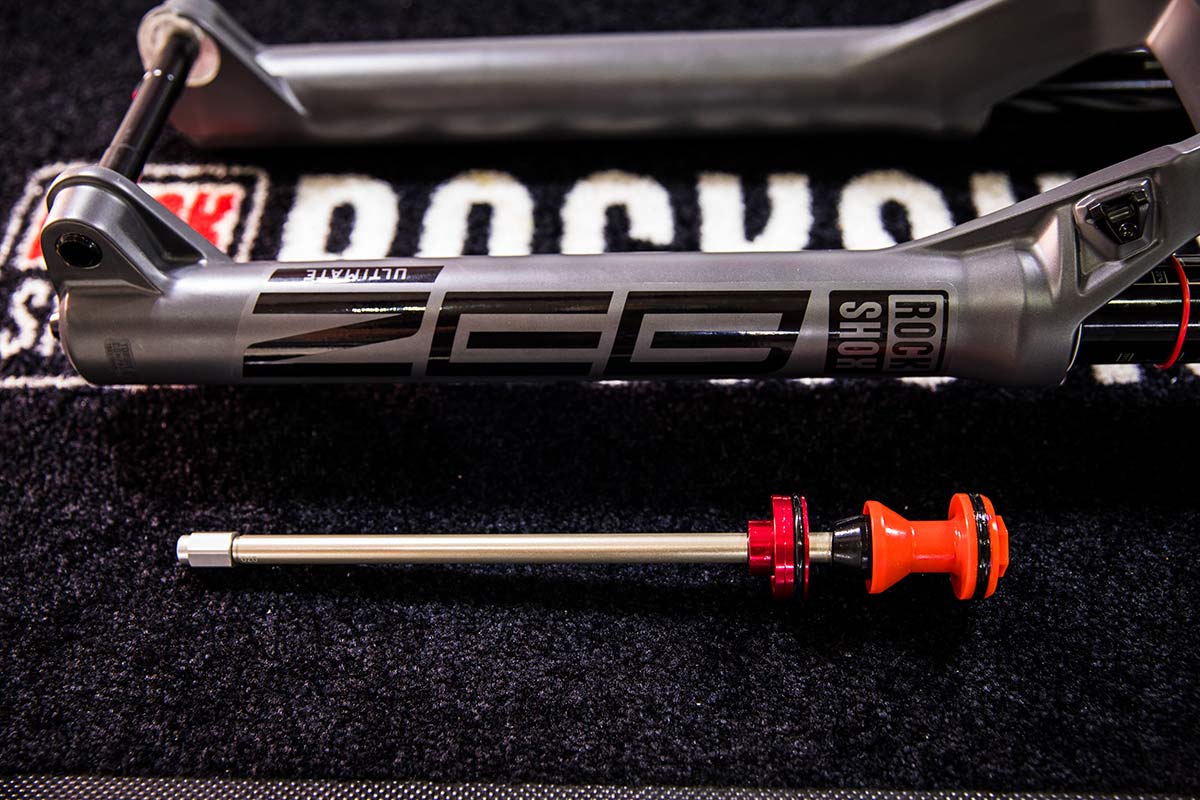 The larger 38mm stanchions create more air volume inside them, so Rockshox says you can run lower air pressures. That also means that smaller changes will have a more pronounced effect on its performance. 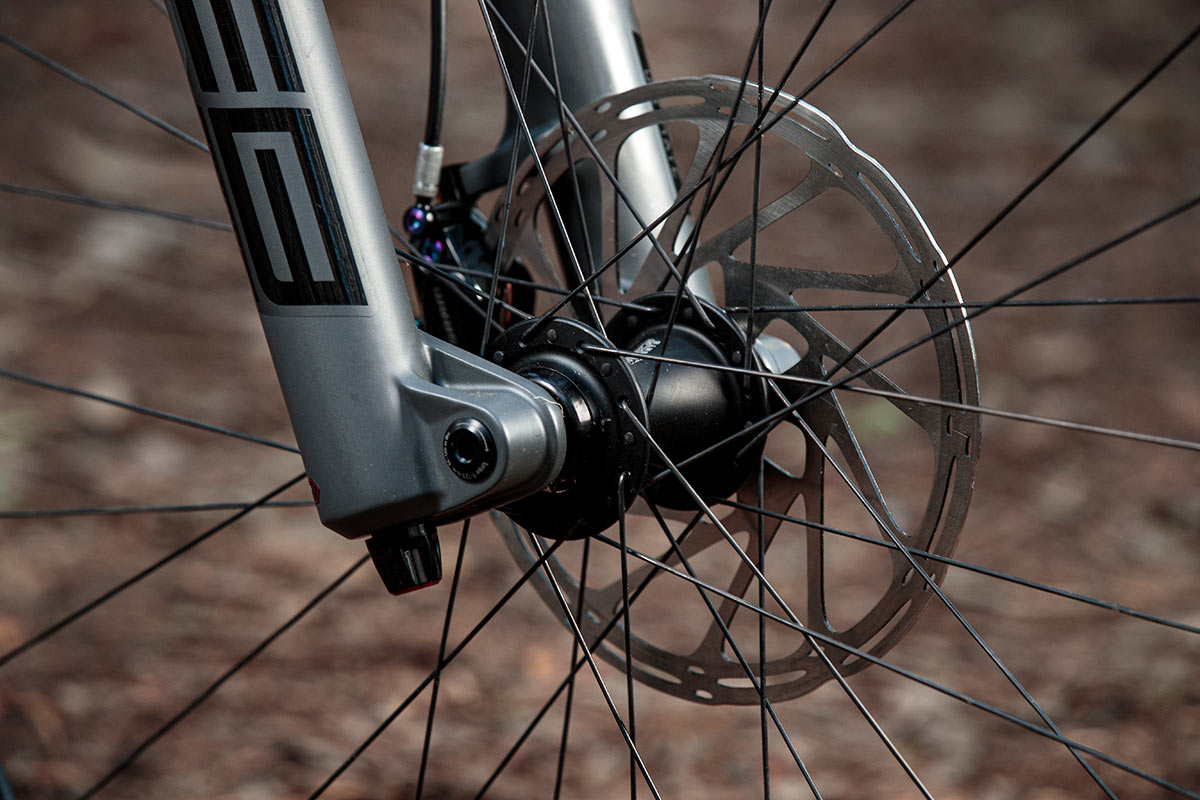 The lowers are designed around a 200mm rotor minimum, but will work with 203mm and 220mm rotors with the appropriate spacers between the caliper and post mounts. They stuck with a 110x15mm thru axle to maximize wheel compatibility, with the option to run Rockshox’s Torque Cap hub endcaps on compatible wheels.

Four models will be offered, including Ultimate, Select+, Select and a new base model called, simply, ZEB. Except as noted in the individual descriptions that follow, shared specs for all models include: 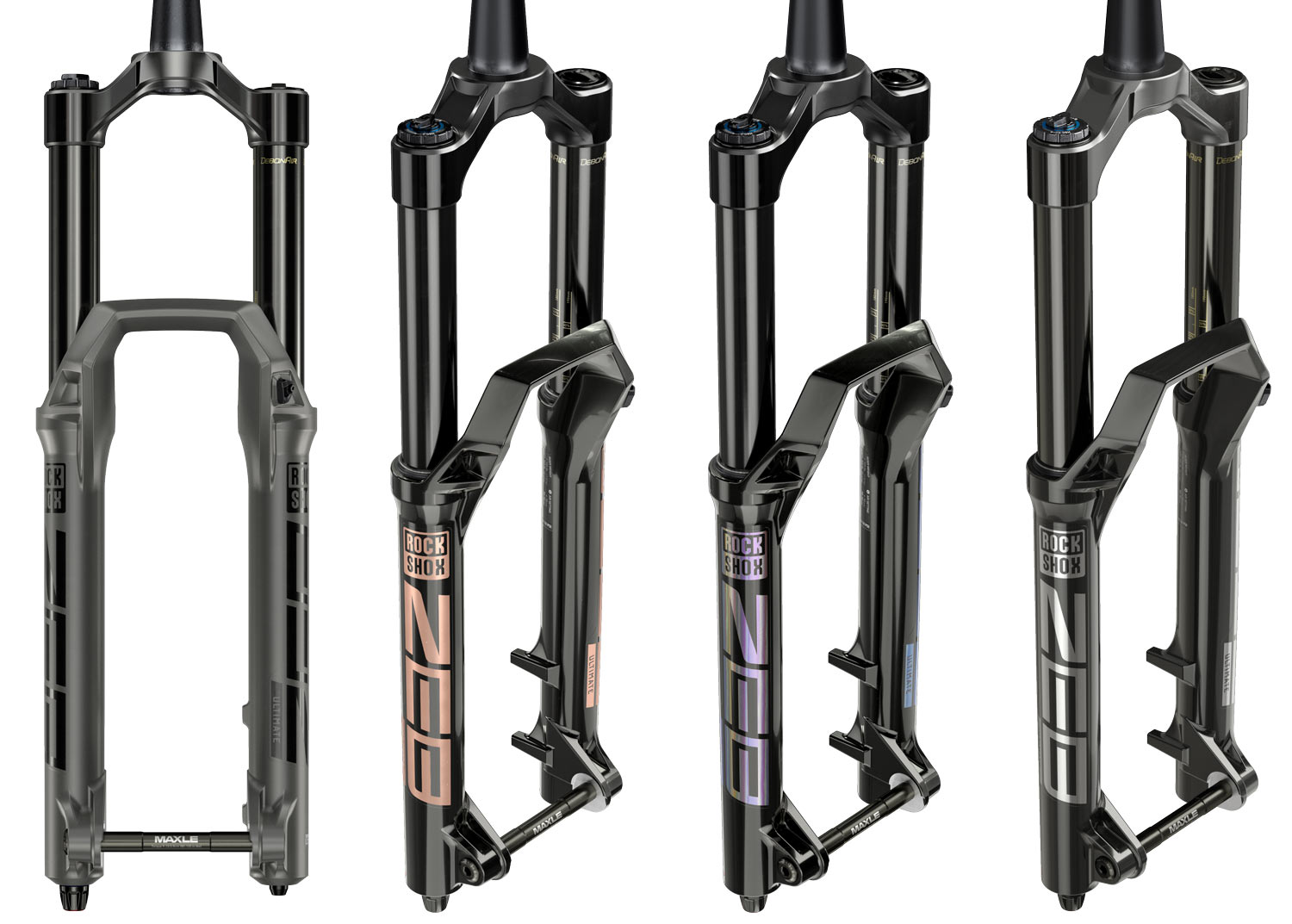 All models use the latest DebonAir air spring, which maintains a higher ride height than before thanks to an updated design inside. Check out our video explanation of how that works for more details. You’ll find it on the 2021 Lyrik, Pike and other forks, too.

The ZEB Ultimate gets the Charger 2.1 RC2 damper, with independent high and low speed compression with rebound adjustment.

Looking for “Ultimate” performance but don’t care about the signature colors? The ZEB Select+ has the same feature set as the ZEB Ultimate, but only comes as a stock fork on high end bikes, and only in all black.

The base level model gets the same 38mm chassis, but drops down to the Charger R damper with non-adjustable factory tuned compression, but keeps an external rebound adjustment. It keeps the SKF wiper seals and Maxima Plush damping fluid, but is the only one that has their Dual Position Air spring, letting you turn a knob to go from 180mm down to 150mm for climbing, then back to 180mm for the descents.

This is mainly intended for e-bike applications, but if you really wanted a big ol’ adjustable fork, this is it. Or go for the DebonAir version in one of four travel lengths.

Let’s say you get the new ZEB and want to change its travel…that’s a simple air spring parts swap. All models (except the Dual Air version) can run any of the five air springs: 150/160/170/180/190mm travel. So, yes, even though most of them state 160 to 190mm of travel, that’s the intended use. You could drop them down to 150mm if you wanted, though it’s probably overkill for anything other than an e-bike. Replacement DebonAir Air Springs are $42 (€47/£42).

I will never be in the market for a fork like this, but it is still very cool.

There is a tumor, a biketumor

It would be really cool if they had a coil option. Thankfully Vorsprung has people covered.. at least soon they will with the Zeb.

The name is terrible, Zeb is a character in Star Wars. Zebulon would have been better, or Totem, since it’s clearly the new Totem. Unless they have a new, 40mm stanchion Totem in the wings to cover every possible market segment.

cultural appropriation is probably why they avoided the Totem name….. but Zeb is a horrible name

Having done some reading, it turns out SRAM/Rockshox let the copyright on the Totem name and branding expire and someone else holds it now. I’ve also discovered that Zeb is French slang for penis. Quite how they failed to discover that over months of design and branding will have to remain a mystery.

they failed to discover that French slang? Maybe they know and is all good, big stanchions and all

Yeah why didnt they call it the SickBroEpic. Seems like a missed opportunity.

Looks good to me!
I may have to call in a favor…