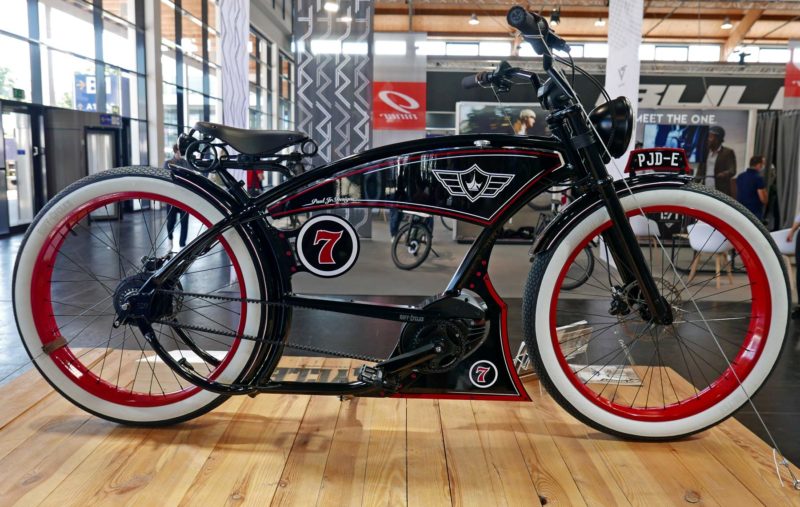 We always knew e-bikes were going to be a trend at Eurobike this year, but a collaboration with Paul Jr. Designs of American Chopper fame made clear that chopper & cafe cruiser motorcycle designs would inspire a growing crop of e-bikes to cruise around town.

While we’ve seen a number e-cruisers before – even several throttle-based e-motos – this latest crop takes advantage of pretty much every style of pedal-assist e-bike powertrain on the market. Check out the latest & greatest we spotted from Ruff Cycles, Aevon Bikes, Super73 & Rayvolt… 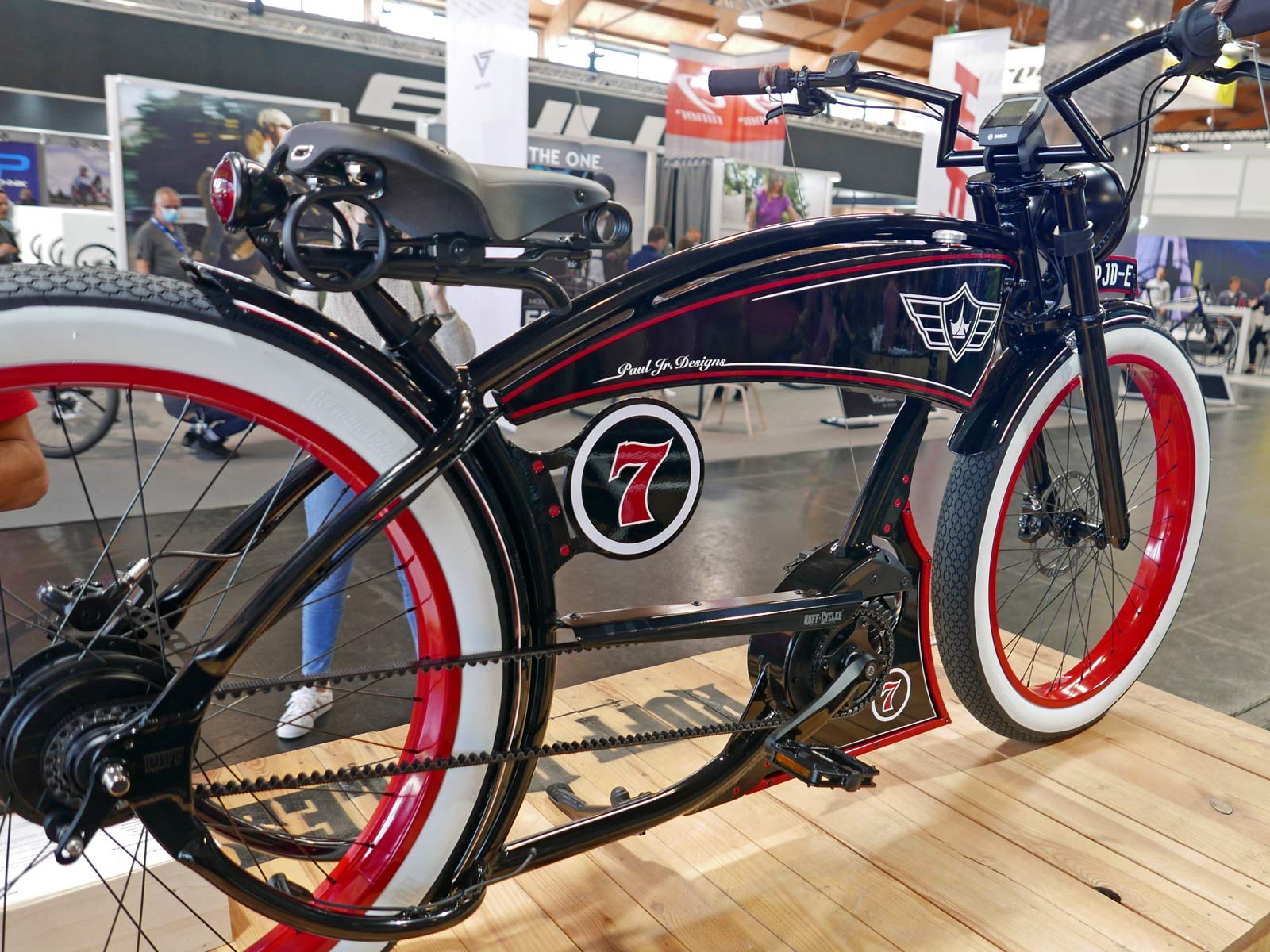 The PJD-E Ruffian, a limited edition e-bike cruiser made by Ruff Cycles in Europe, was designed by custom motorcycle designer Paul Teutul Jr of American Chopper fame, said to be inspired by his motorcycle from their “Build-Off 2” custom challenge. The e-bike is built by Ruff with an aluminum frameset crafted in Bosnia and Herzegovina before heading to their German HQ for hand finishing. 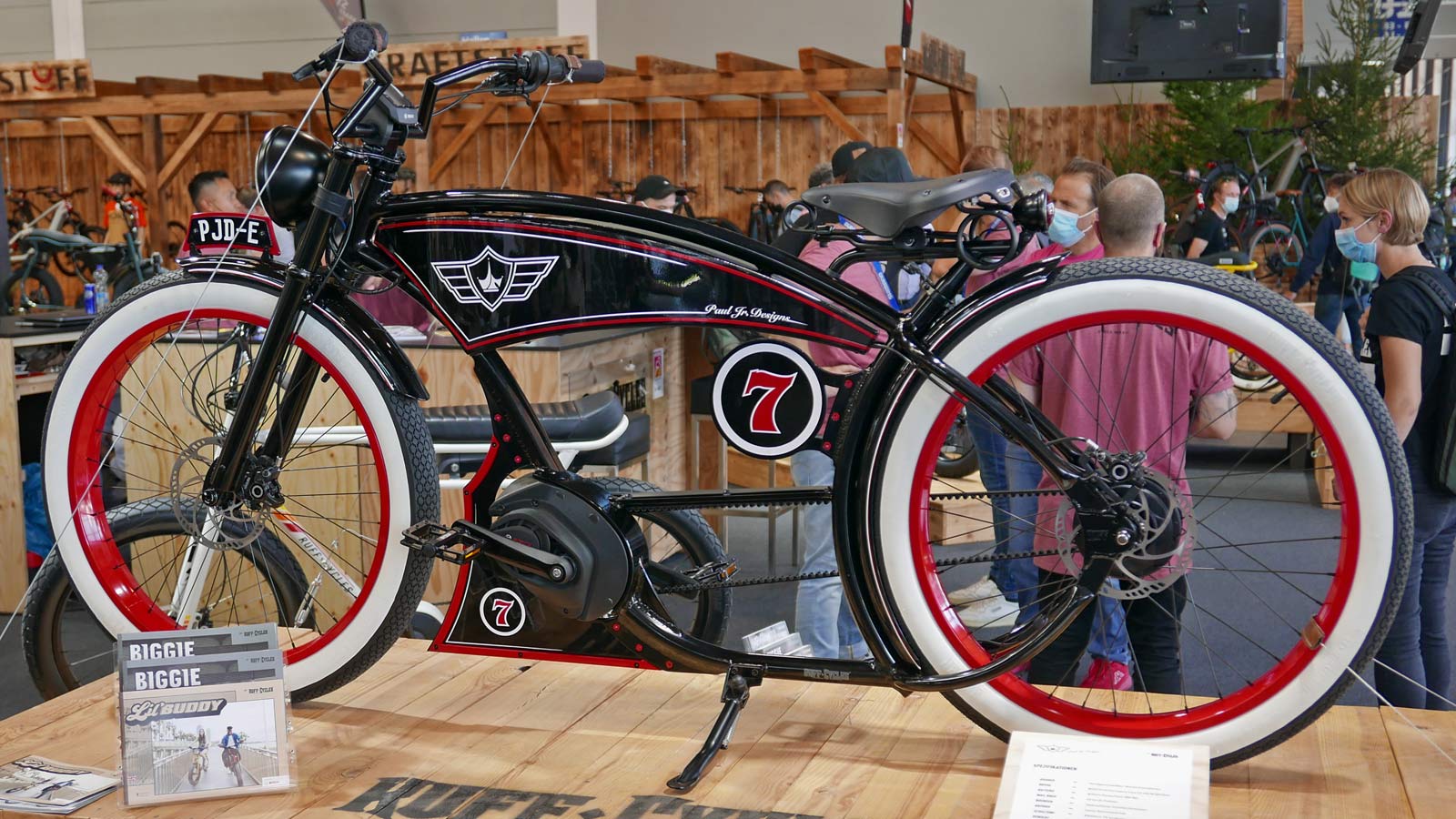 The 25km/hr pedal-assist e-bike is being offered in Europe only for the time being for 6600€. It is powered by a Bosch Performance Line CX motor with a 500W battery hidden in the chopper’s tank, an Enviolo CVT hub out back for a wide gearing range through a Gates belt drive, and Magura hydraulic disc brakes. 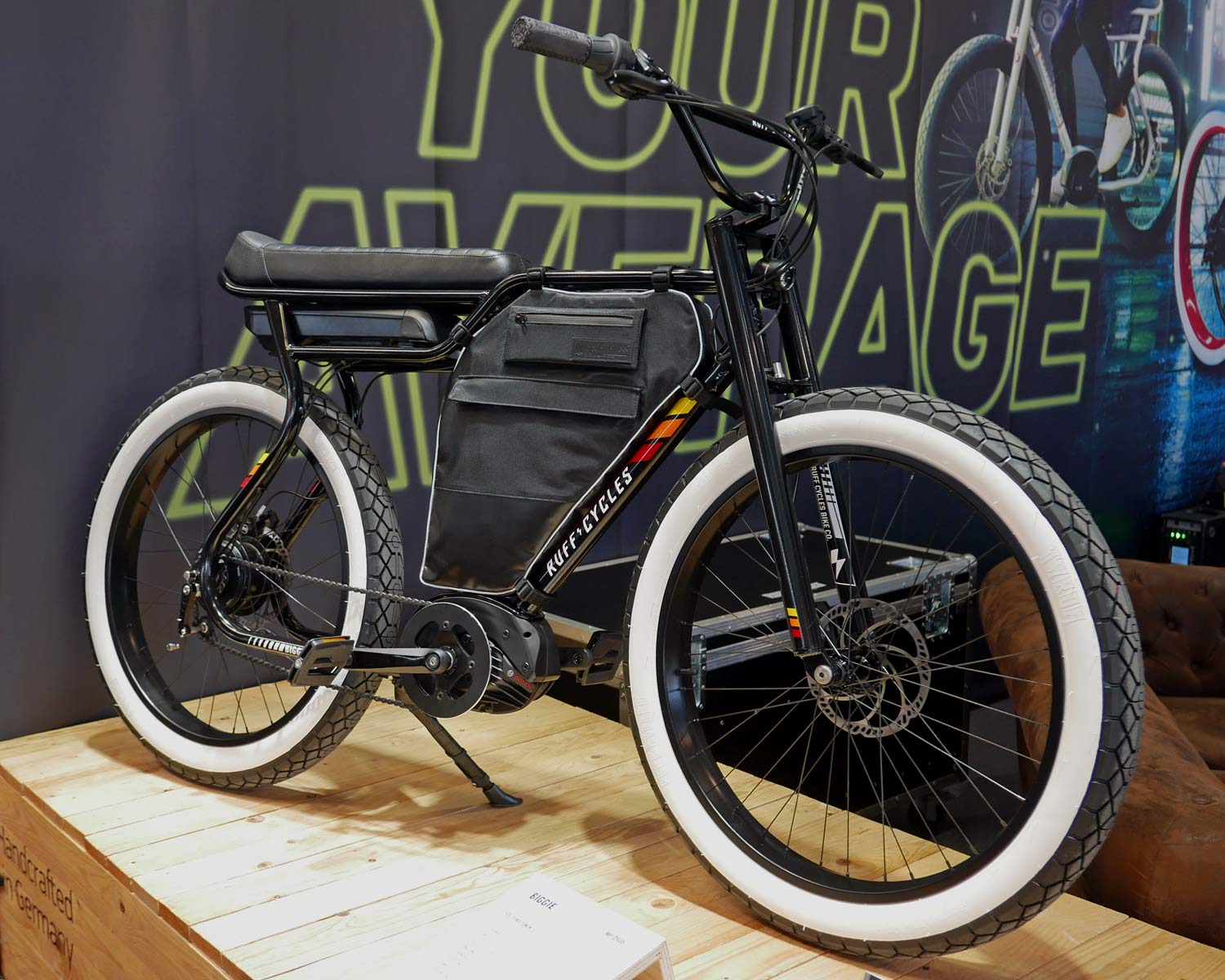 A newer style of e-bike cruiser from Ruff is their new Biggie cafe racer. Pretty much a scaled-up version of their previous Lil’ Buddy, the new Biggies share a similar open loop style steel frame but much larger 26×3.0″ tires. Like the chopper, the Biggie is made in Europe and offered with tons of options for personalization. 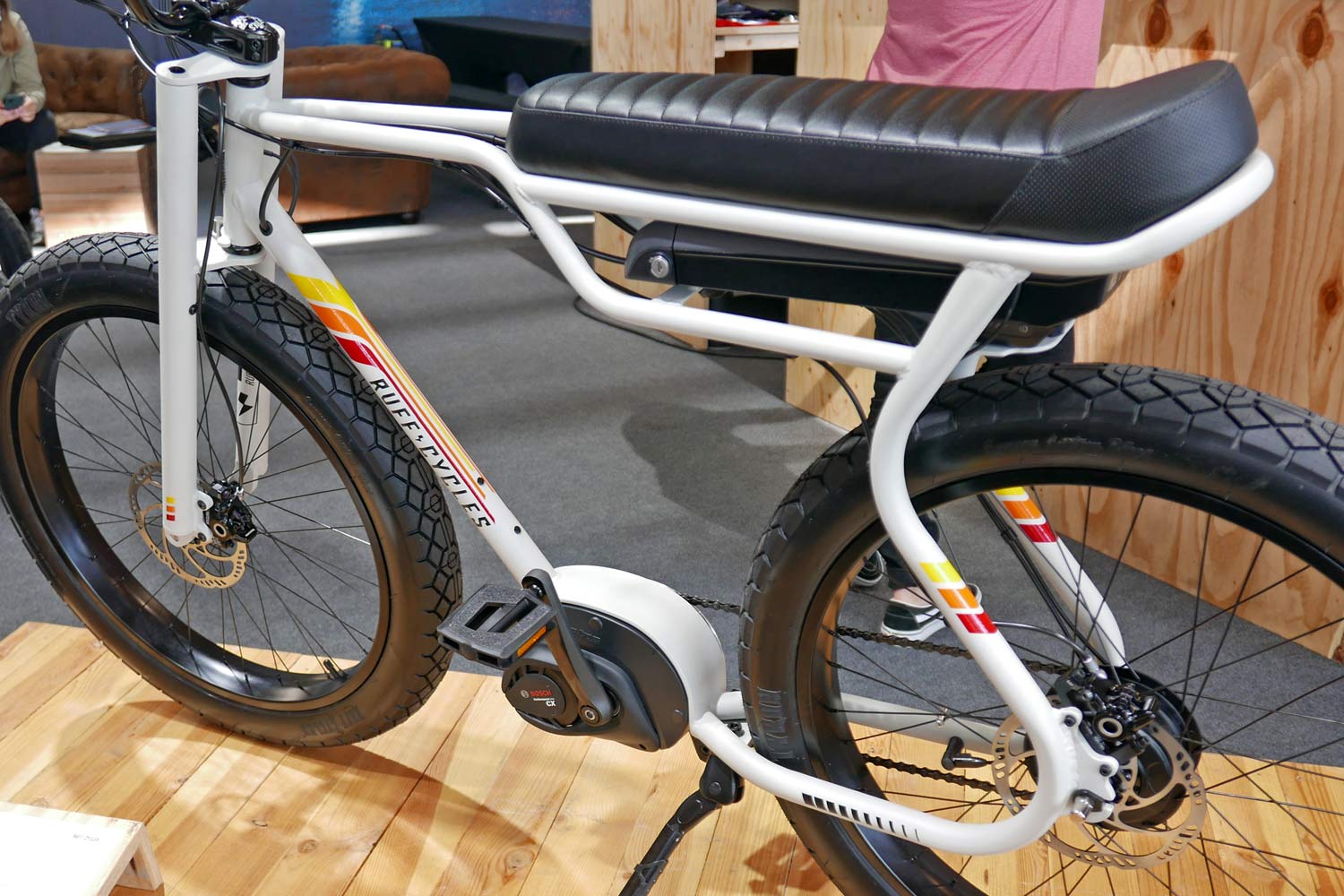 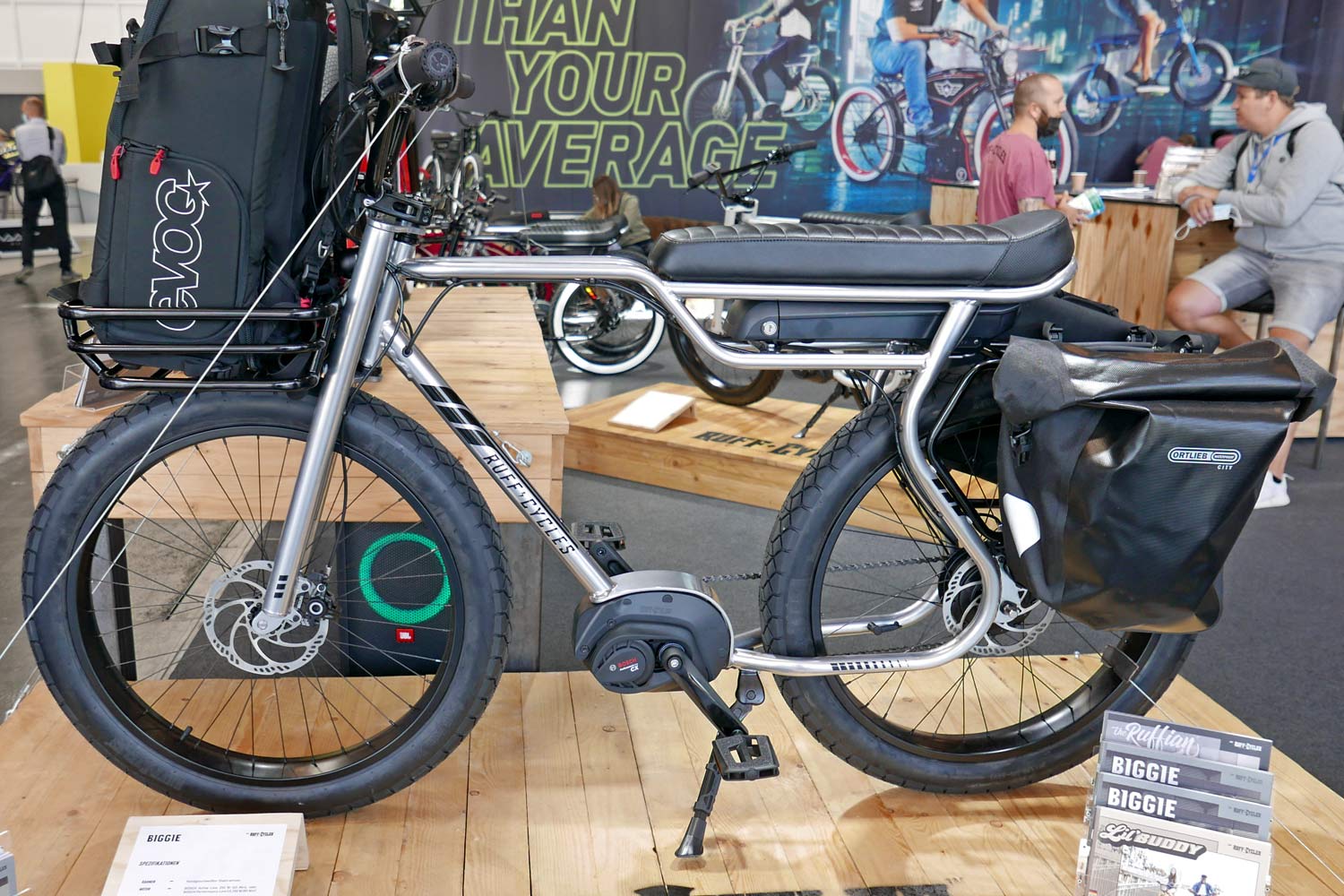 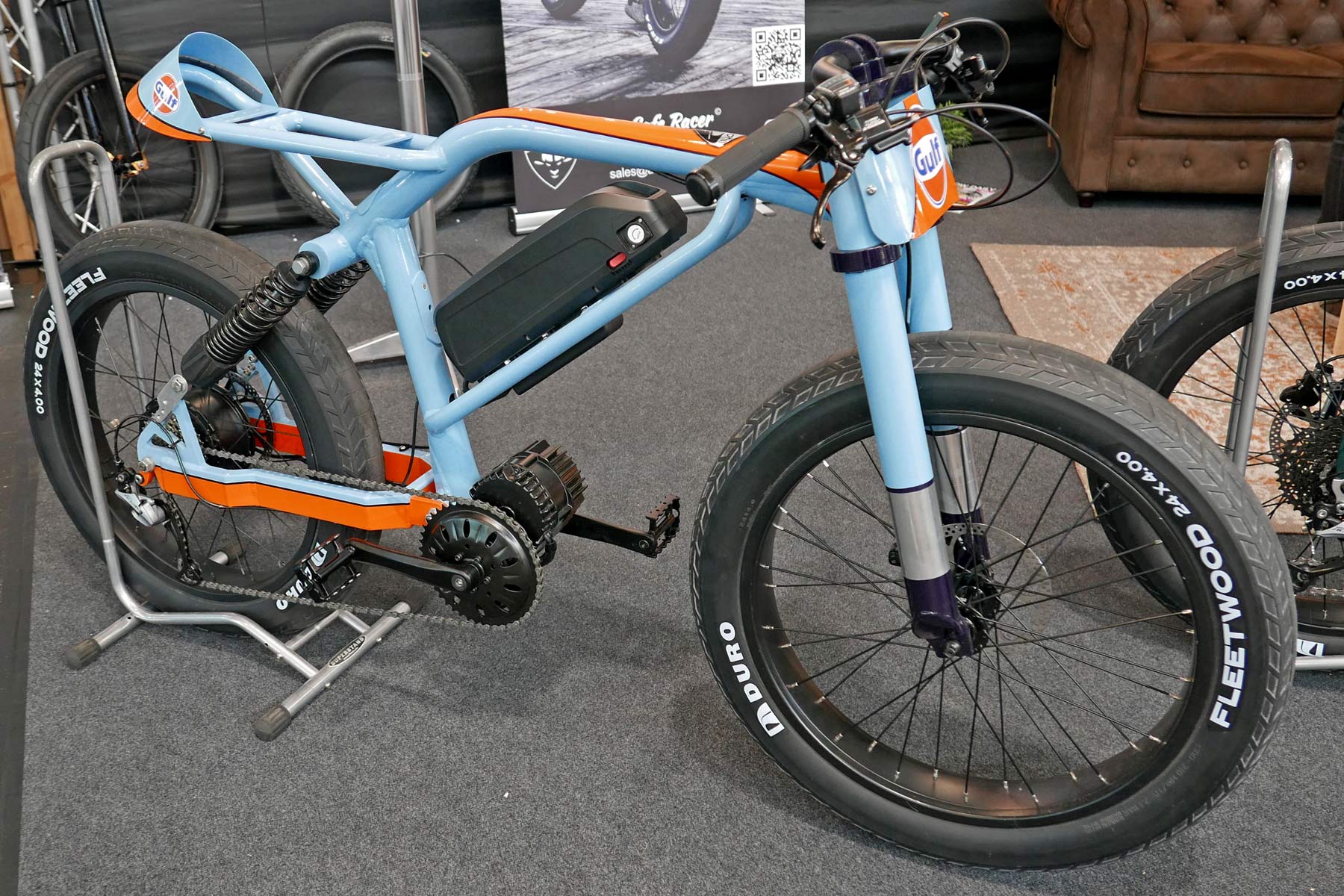 Aevon’s Le Cafe Racer project has been chugging along offering customizable, full-suspension cruisers in pedal-only or e-bike variations to get around town in style. It’s hard to argue with the unique look and flair of this Gulf Racing replica. 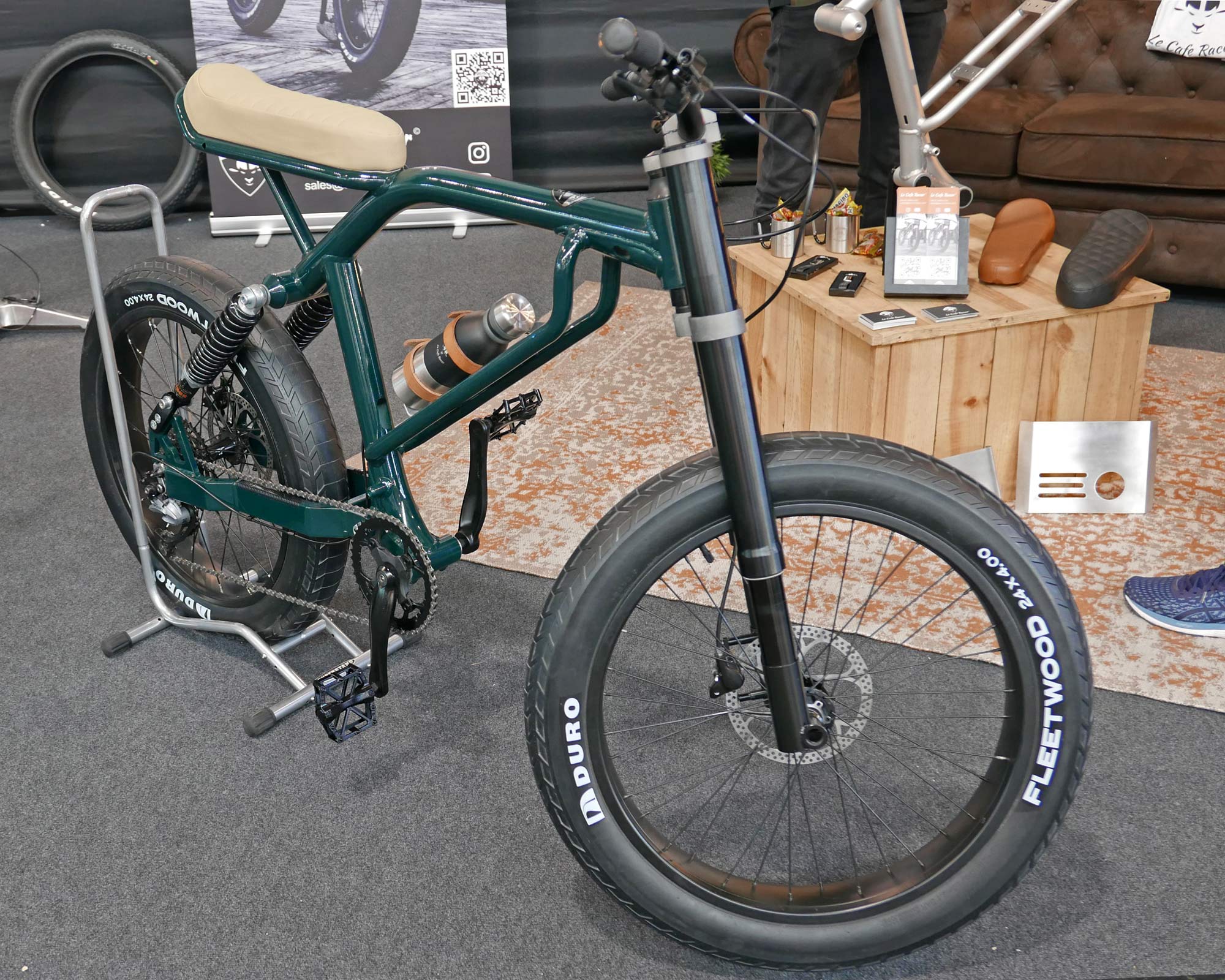 Disc brakes and integrated LED lighting come standard in the 3000€ starting price tag, but it is up to each buyer if they way 250W pedal-assist or up to 1000W pedelec mid-drive or hub motors, internally geared hubs, or even conventional derailleurs. Aevon even says they’ll fabricate a custom surfboard rack for you, add a trailer hitch, give it moto-style turn signals, or pretty much any other customization you can imagine.

The trick is they’ll make just 50 pieces once they get official later this year, so pre-order now if you want your e-bike cruiser to be ultra-custom. 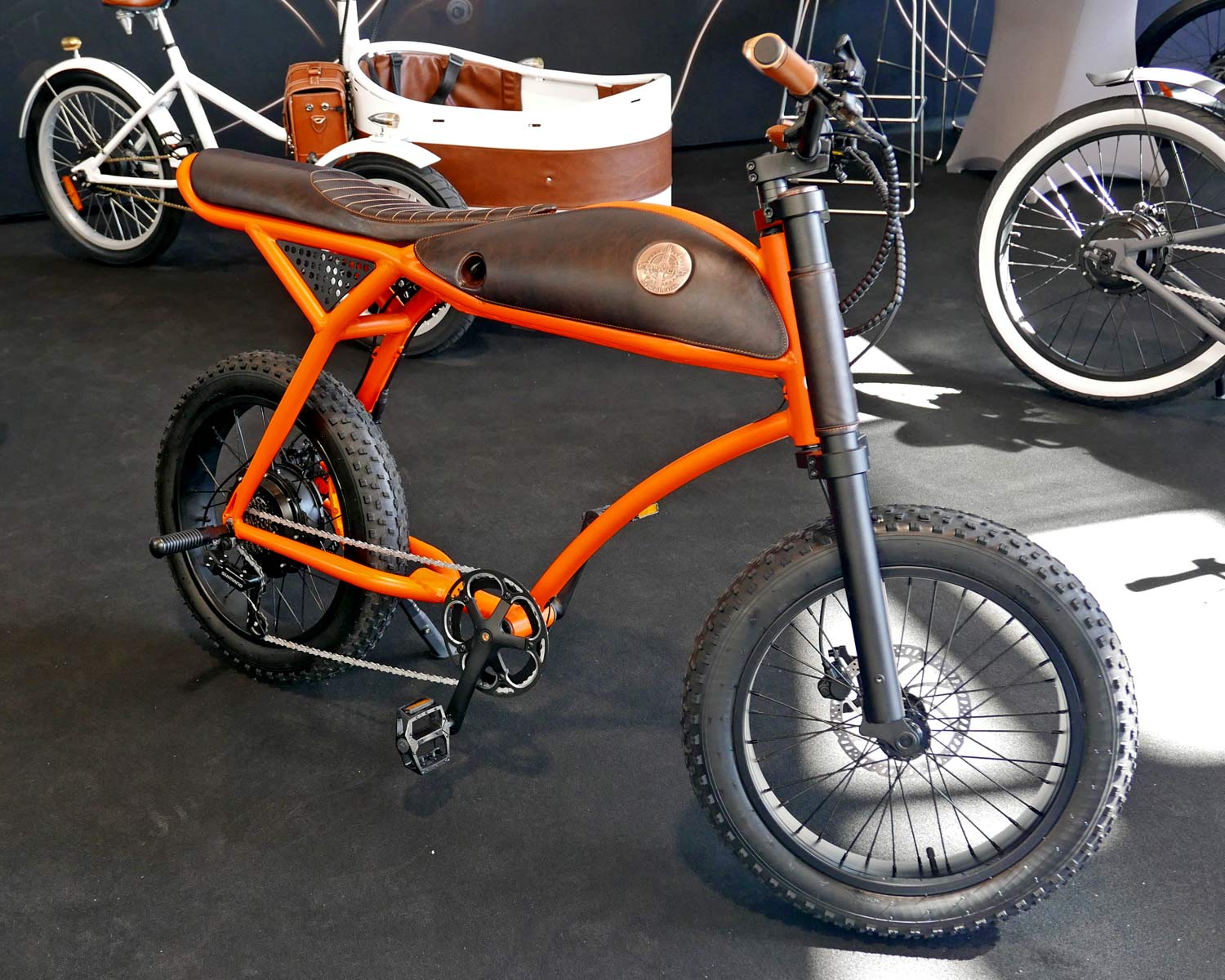 Not to be left off, German bike maker Rayvolt puts out a bunch of urban e-bikes, with solid options for both cafe racers & cruisers (not to mention 3-wheeled Trixie taxi trikes, too.)

This Django is their 20″ wheeled mini cafe racer e-bike, with a hub-based motor, and a long seat & footpegs to keep a passenger comfy spinning around town (also called the Ringo in some configurations). 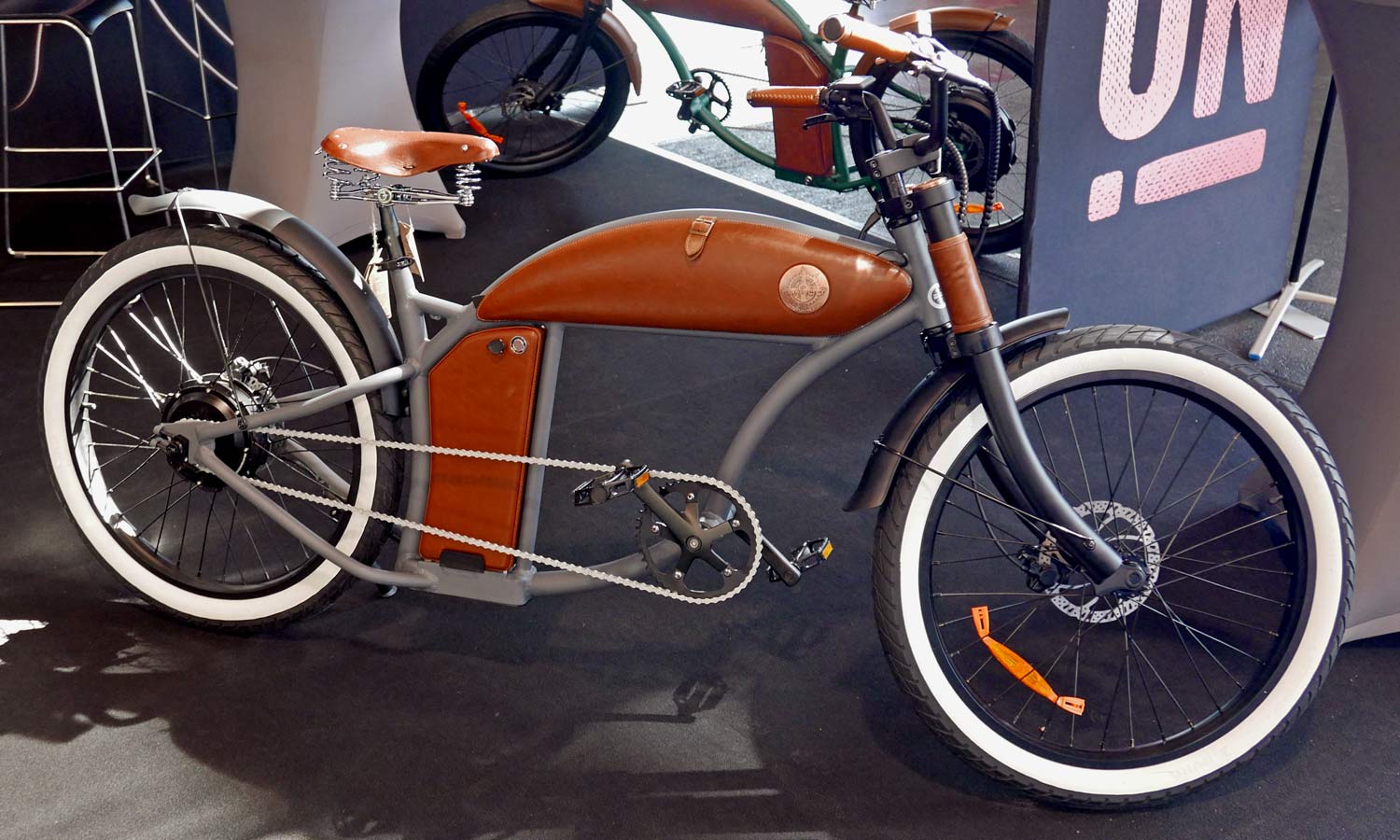 The Cruzer is their stretched out chopper, with 3″ wide tires on 24″ or 26″ wheels depending on frame size and a couple of 250W hub motor powertrain choices. 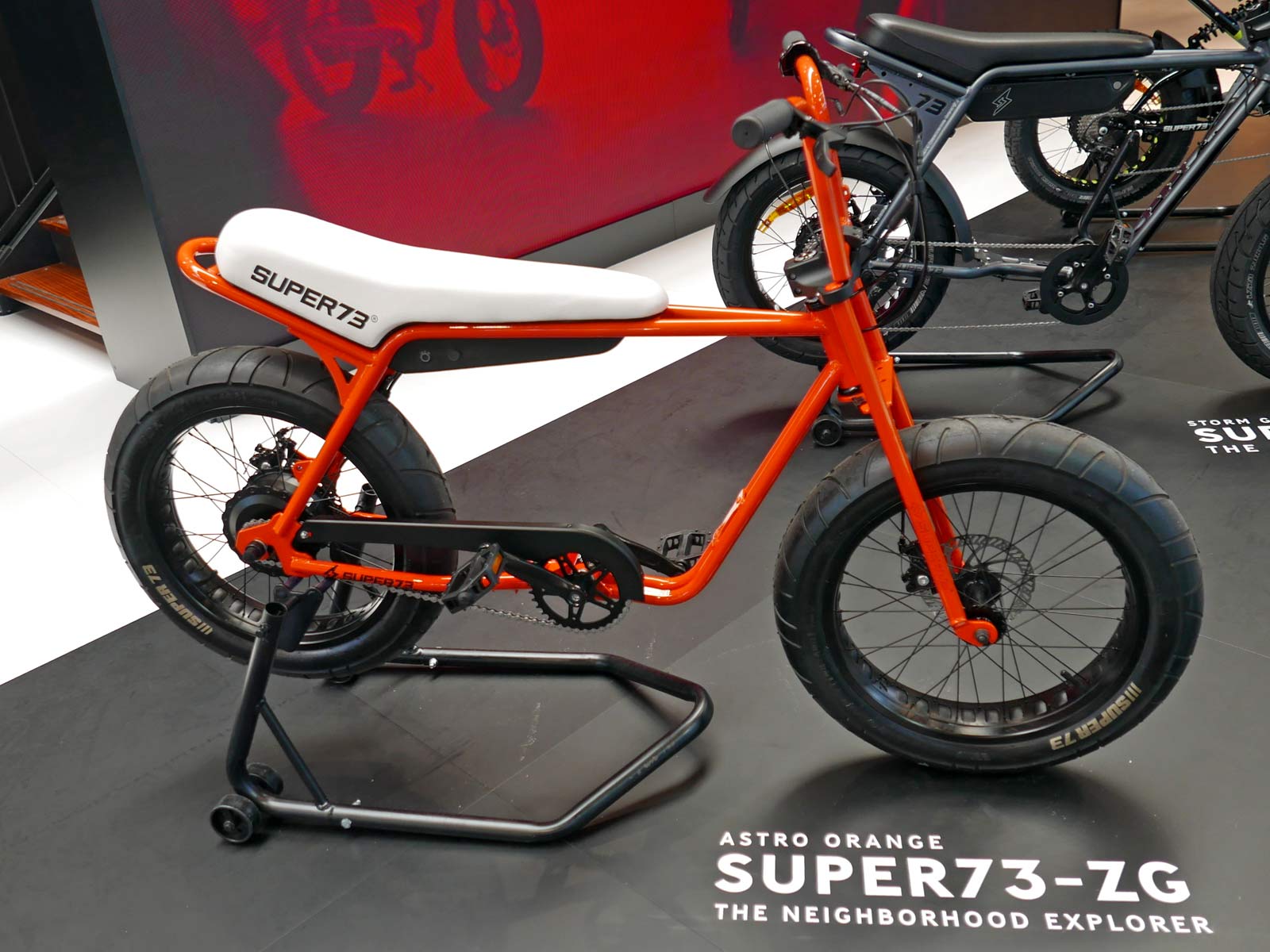 The new Super73-ZG is another compact cafe racer style e-bike cruiser for those looking to zip around town. There are plenty of options to pick what power and accessories you need, with prices starting from 1600€. The Super73 also happens to be part of the recently announced Best Buy e-bike e-mobility line-up making them much easier to get for US-based buyers, especially over the Labor Day weekend sales events.

What price is it
9