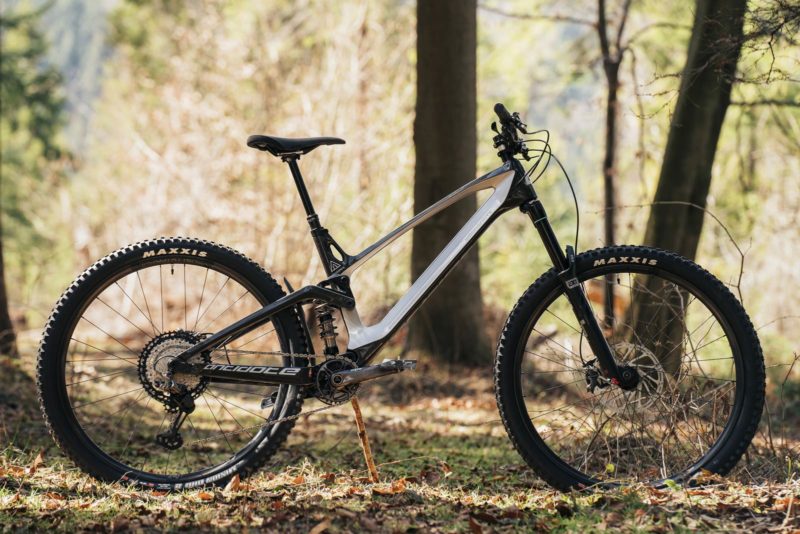 Antidote Bikes has today made public its new short-travel 29er trail bike; the Antidote Woodsprite. It has all the aesthetic hallmarks of an Antidote; the shock is positioned behind the seat tube, the seat post clamp is integrated into the frame, and the paintwork too makes this bike instantly recognizable as an Antidote.

With just 135mm of rear wheel travel, the Woodsprite can, in many ways, be thought of as a pared-back version of the 150mm Carbonjack, running a simplified version of its Floating Damping System, optimised to keep weight down and pedaling efficiency up. The Polish brand has been rather generous with kinematic information for this one, so prepare to geek out. 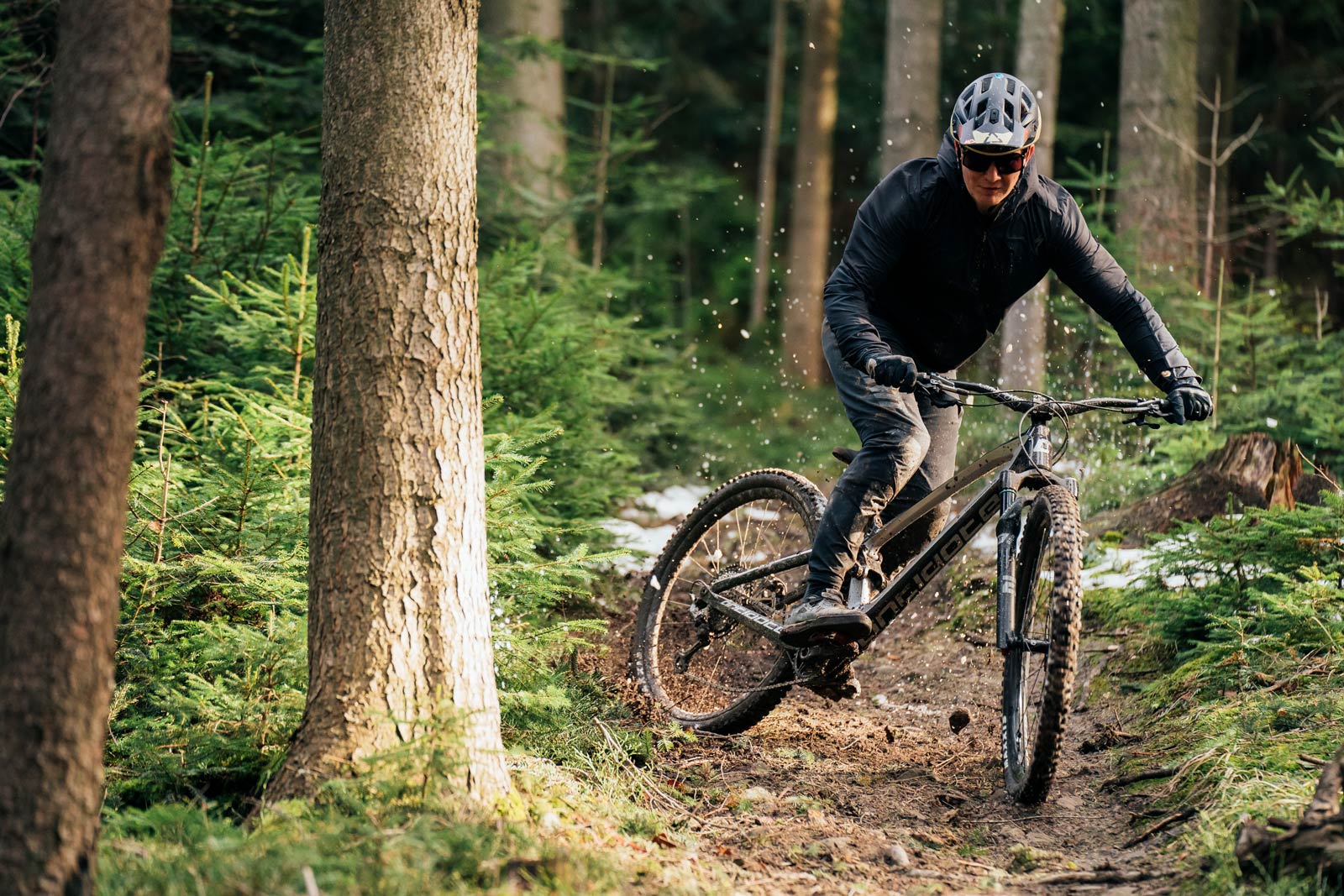 Like its long-travel enduro sibling, the new 135mm travel Woodsprite is designed, manufactured and put together in-house at the Antidote Bikes HQ in Kraków, Poland. The front and rear triangles are made from a monocoque carbon and Vectran composite, and the link you see bolted to the seat stays and upper shock mount is CNC machined 7075 T6 aluminum. Titanium hardware is used throughout, helping to keep frame weight to a claimed 2.5 kg without the shock (with all frame protectors). 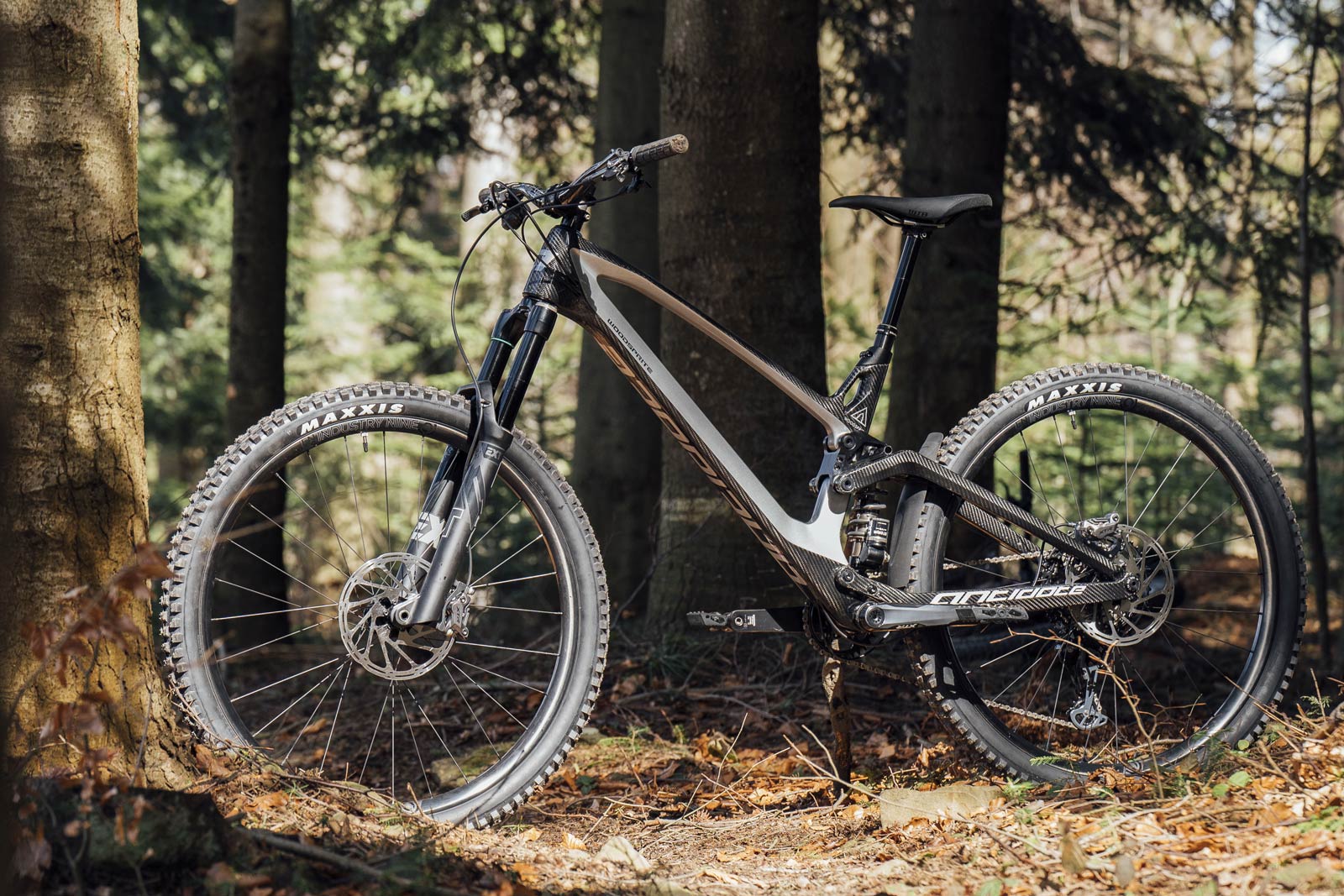 The Woodsprite’s 55mm stroke rear shock delivers 135mm of rear wheel travel via the so-called SMART Floating Damper System (FDS), a less complex version of the FDS seen on the Carbonjack. While we see a pair of counter-rotating links on the Carbonjack, with the shock suspended between the two, the Woodsprite’s suspension platform retains only the upper rocker link. The lower link that pivots about the bottom bracket gives way to a design wherein the lower shock mount is fixed to the chainstay, which itself pivots about a main pivot located in line with the top chainline. 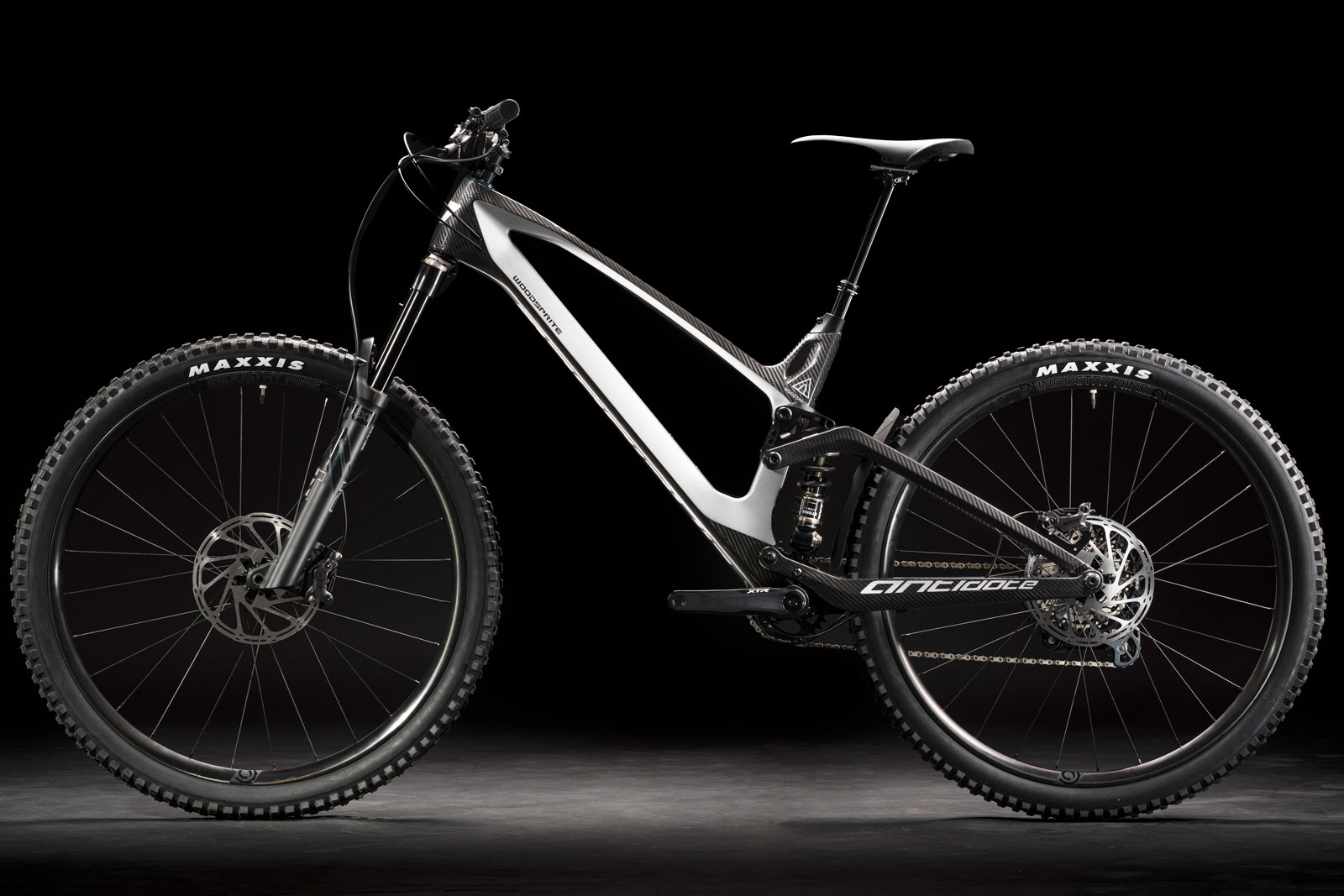 Black on black is always a pain, but we have increased the brightness on this image to make the linkage easier to see…

The SMART execution of Antidote’s FDS saves on weight, of course. Fewer parts and hardware, along with the revised rear triangle with a pivot at the dropouts, is said to result in a frame that is 15% lighter. Antidote tells us the advantages that come along with the more complex linkage design we see on the Carbonjack (ability to control anti-squat and anti-rise deeper into the travel) are less beneficial on a shorter travel bike, rendering the weight penalty associated with it pointless.

Antidote has been generous in sharing the Woodsprite’s kinematic information, so if you want the low-down on leverage ratios, anti-rise, anti-squat, axle path and pedal kickback, we have all that for you after the following discussion of geometry. 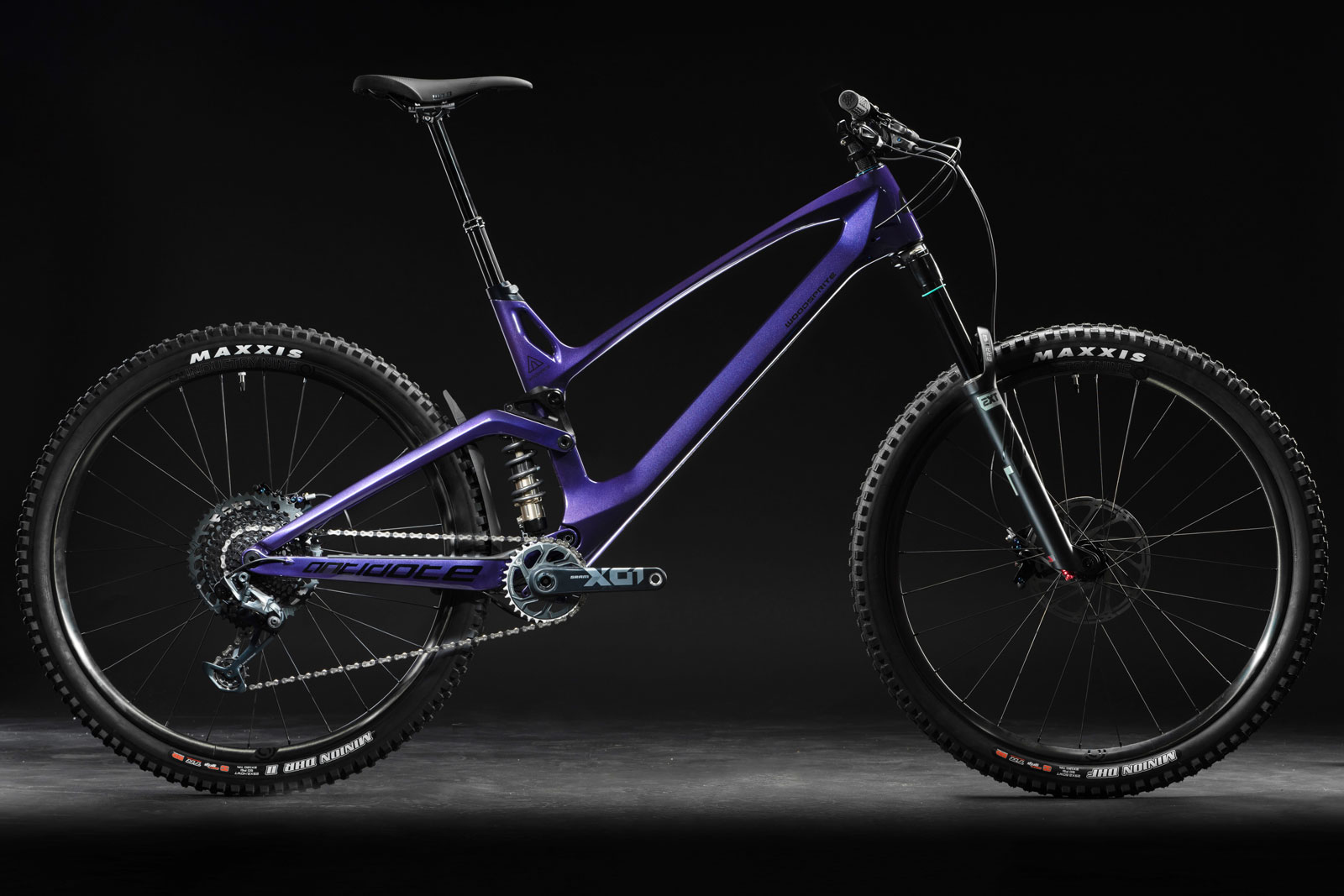 No flip-chips or shape-shifter levers on the Woodsprite… Antidote chose a set of geometry figures they liked and stuck with them; recommended fork offset is 42-44mm.

The Woodsprite’s geometry numbers give rise to its aggressive trail bike aesthetic, with a 65.5° head angle and a 485mm reach on the size large. Across the M-XL frame sizes, chainstay length is consistent at 450mm, which should be plenty long enough to make for a well-balanced bike in terms of front-to-rear weight distribution, particularly on the medium which sports a reach of 455mm.

Seat tubes are short enough, at 440mm on the large, sat at an effective 76.5° at a saddle height of 780mm. Seat tube insertion is sufficient to permit use of the following dropper seat posts: 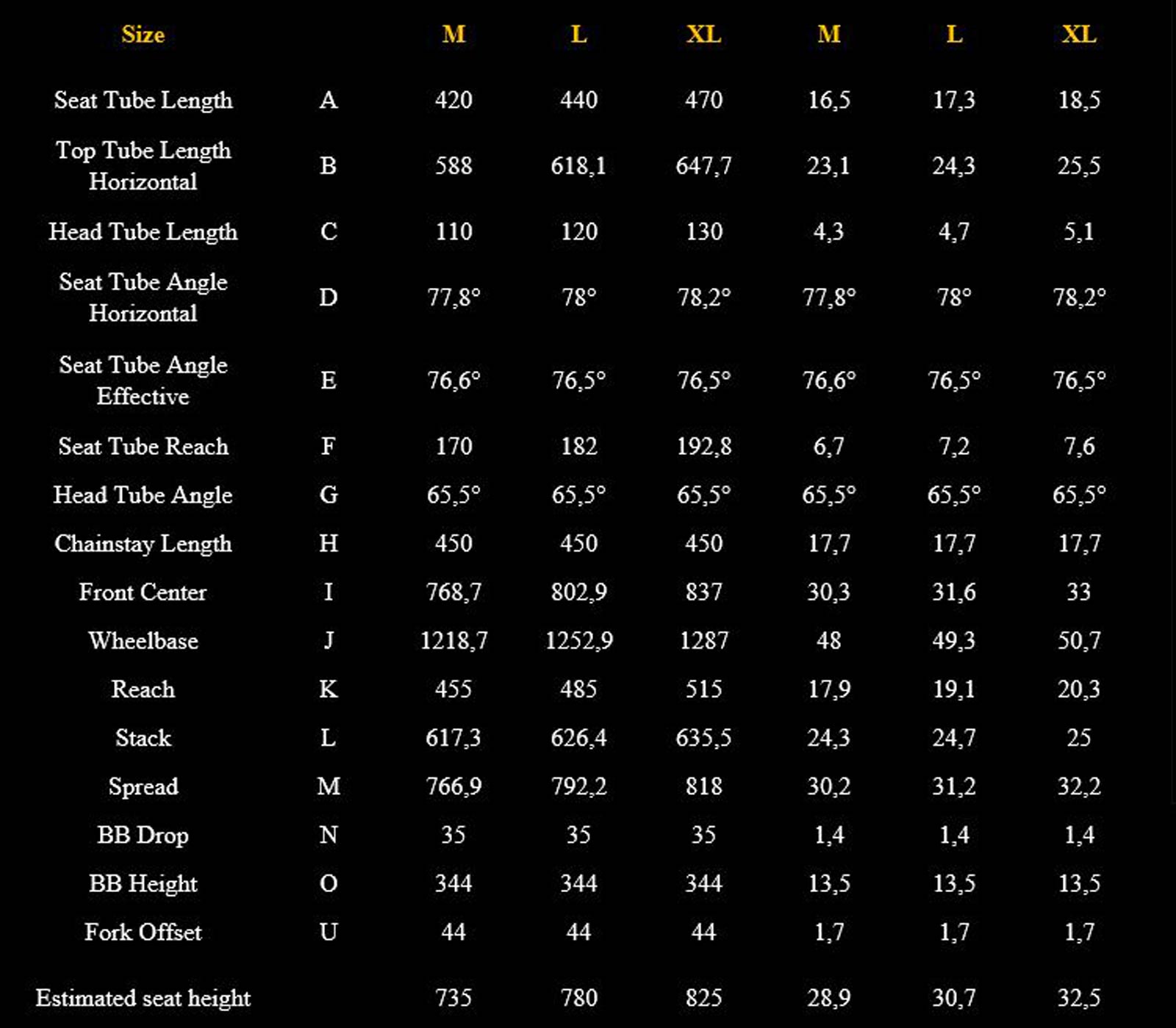 The geometry numbers published herein relate to a 140mm travel fork, though Antidote approve use of a 150mm fork too

Antidote describe the Woodsprite’s ride quality as follows, “[it] offers a very quick and stable ride, a reassuring characteristic of longer-travel bikes, but its bespoke and shorter suspension layout encourages the rider to go airborne, saves energy and provides excellent feedback from the trail. It allows [you] to squeeze out 100% of fun from a simple trail near your house, as well as pump you full of adrenaline on a rock garden in the mountains. It’s light, fast, it climbs great and goes downhill like a stabbed rat”. 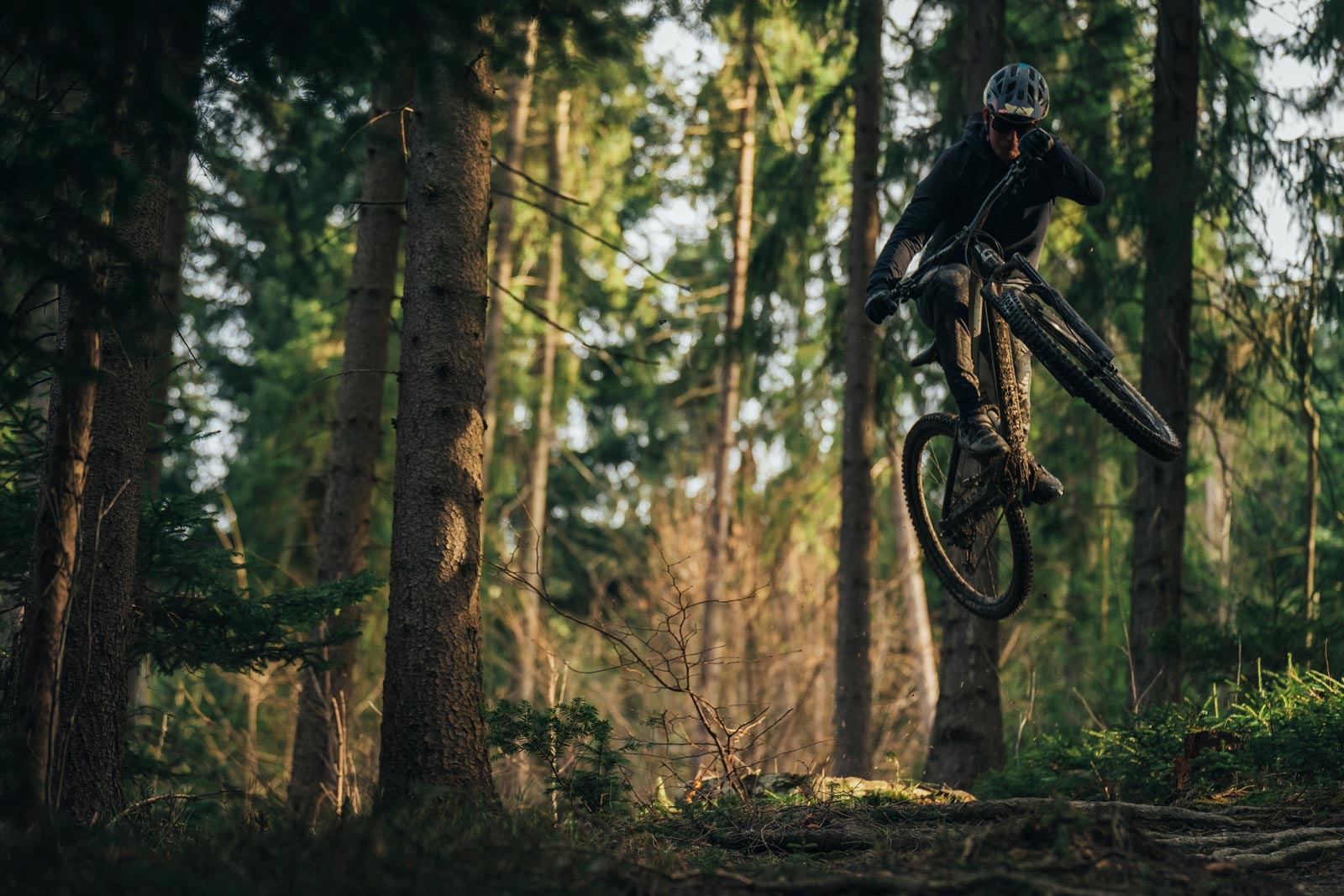 We’ve never seen a stabbed rat go downhill, but let’s assume it does it quickly, and with a great deal of enthusiasm.

There’s a whole load of math lying behind that ride feel, of course, and Antidote has been forthcoming in providing the details. There’s nothing weird and wonderful going on with the rear axle path; it arcs rearward initially to the sag point, then tracks a forward path thereafter. At bottom-out of the bike’s rear suspension only, the wheelbase is reduced by around 10.5mm.

The Woodsprite’s 55mm stroke shock gives it a leverage ratio of 2.45 with progression around 16% from the sag point to bottom-out. Antidote tell us it is optimized for use with both air and coil spring shocks.

Antidote has shared anti-rise information to give us an idea of how the suspension performs under rear wheel braking. If you’re a little unfamiliar with the concept, you should definitely read this explainer article, particularly Chris Currie’s contribution which features diagrams and an explanation of how anti-rise values are actually calculated. In brief, the higher the anti-rise value, the lower the suspension’s propensity to extend under rear braking; i.e. the closer it is to 100%, the more the bike’s geometry should be preserved under braking, as it is able to resist the mass transfer that occurs during deceleration. It is also dictated by where the bike is sat in its travel at any given moment, with a tendency to decrease the deeper into the travel you go.

If you do read the aforementioned recommended explainer piece, you will learn that a bike’s anti-rise values depend very much on the location of its centre of gravity, and that is dependent on the rider’s height, weight, and position on the bike. The above graph was generated for a large Woodsprite, with an assumed rider height of 185cm, positioned in a standing riding position. Around dynamic sag, anti-rise is somewhere between 79% and 81%, decreasing in a linear fashion to 72% around two-thirds of the way into the travel. The fact that the chainstays are consistent across the M-XL frame size means these values will be slightly different for the Medium and XL frames.

For context, the Woodsprite’s anti-rise values over the dynamic sag range are lower than those given for the 150mm travel Carbonjack with its dual-link FDS platform, quoted around 80-84%.

Perhaps more important for a relatively short travel bike are its anti-squat values, which help to describe the suspension’s tendency to compress under pedaling and acceleration. The higher the percentage, the lesser the pedal bob. Again, it depends on the system’s (bike and rider) centre of gravity, but also on which gear you’re pedaling. Antidote wanted to keep the Woodsprite’s anti-squat value concentrated over a narrow range (within 10%) of one another through the dynamic sag portion of the rear wheel travel, so the bike has a similar responsive feel when you lay the power down no matter which sprocket of the cassette you’re in.

Antidote has also chosen to share pedal kickback information for the Woodsprite, something we rarely see from brands. This is closely linked to a bike’s anti-squat characteristics. It describes how much rearward crank arm rotation will be experienced at any point in the travel, depending on which gear you’re in. Ultimately, pedal kickback goes largely unnoticed on the trail, and can only really be felt in very specific scenarios such as under heavy rear braking over rough terrain, or big rear wheel compressions at very slow speeds. It’s cool to see it graphed out, though, and helps give some context to how exactly the OChain Active Spider works, if that is something you’ve ever considered. 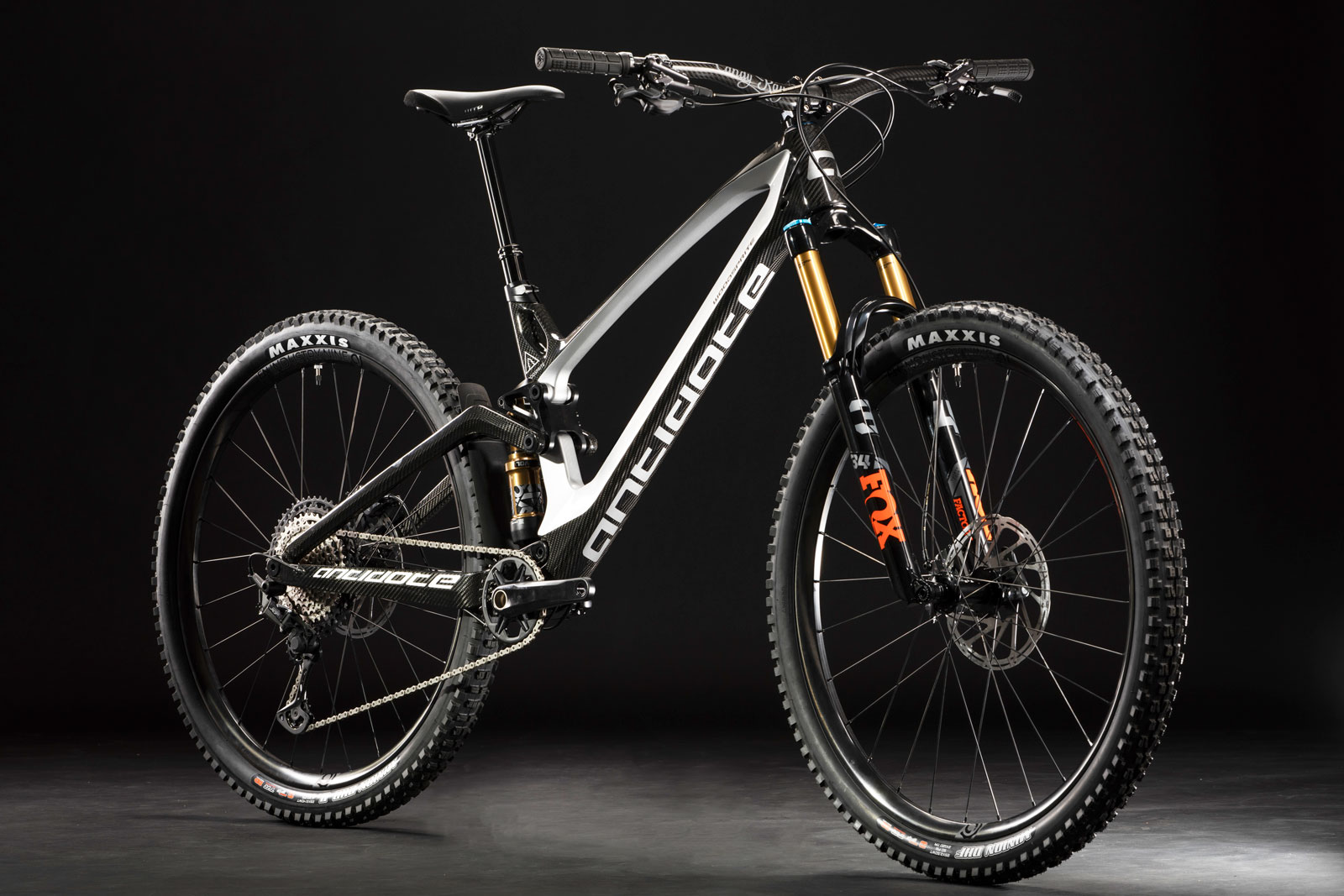 Like the Carbonjack, the Antidote Woodsprite runs a Boost rear end (148mm x 12mm) and has sufficient clearance out back for a 29″ x 2.6″ tire mounted on a 30mm internal width rim. It is shown here with a rear fender bolted to the seat stays – we’re waiting to hear whether the fender comes with the bike/frameset, and whether or not it is replaceable and at what cost. Other notables are as follows: 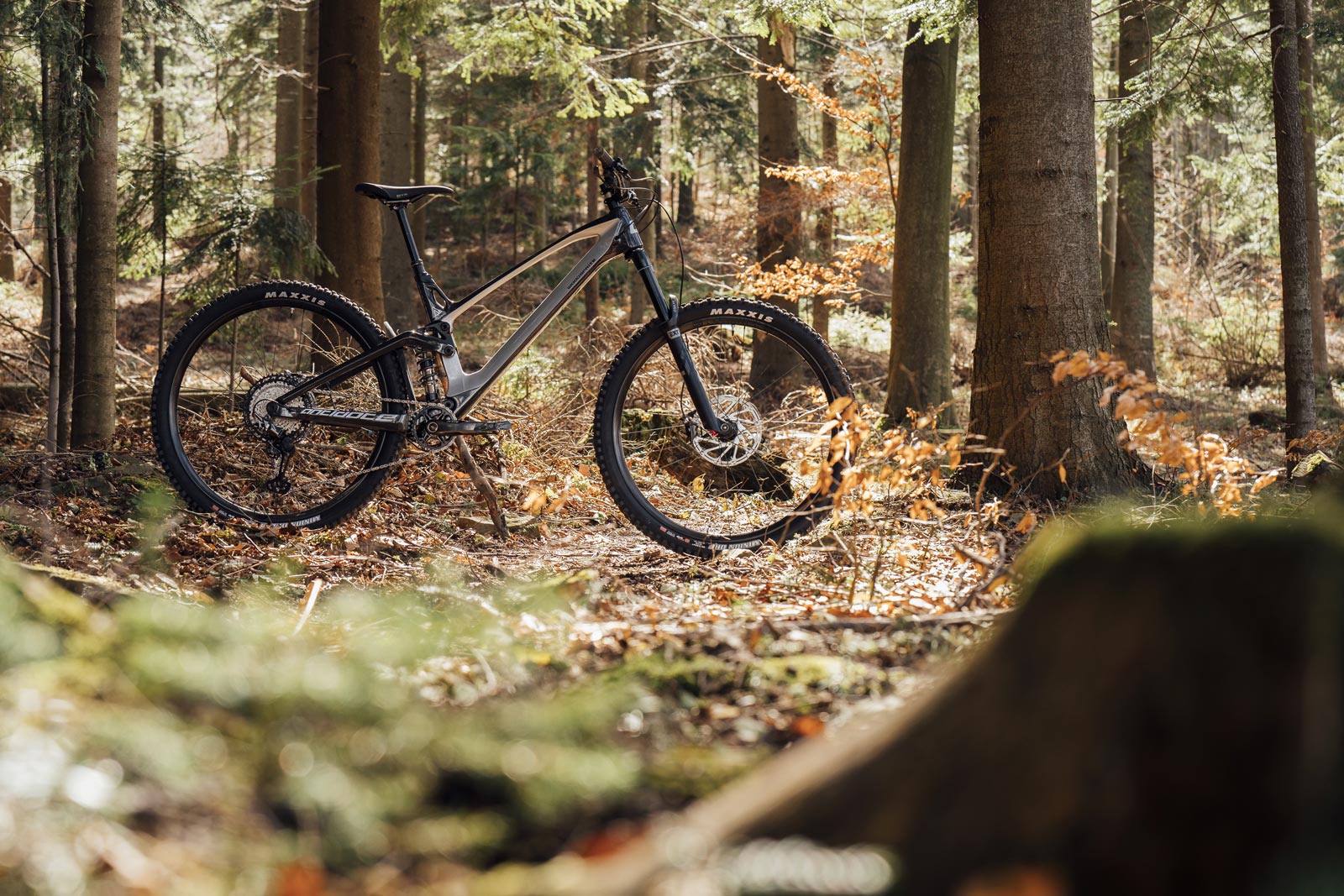 For complete spec lists, head to the Antidote Bikes website.

Is it just me, or is there no cupholder spot inside the front triangle?