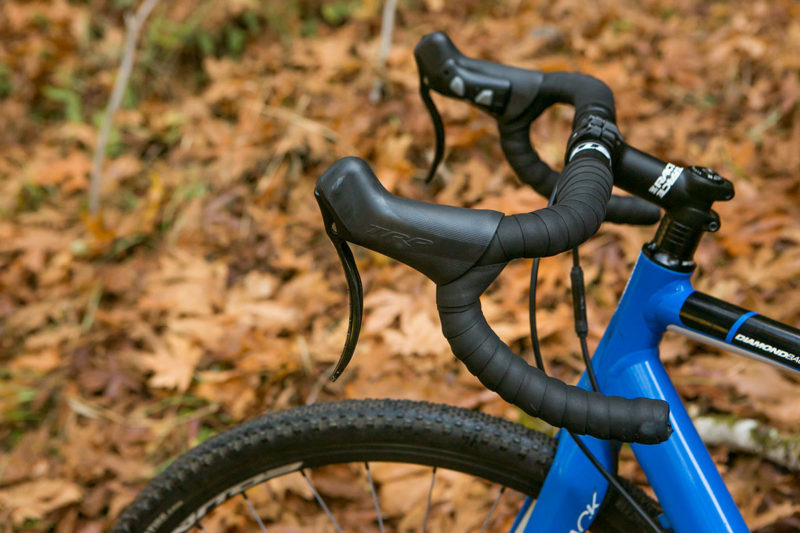 Do you not want wireless shifting for your drop bar road, gravel or cyclocross bike? Because, YUP, it’s now available for any brand derailleur, any drivetrain. Well, assuming you don’t mind swapping to TRP’s stellar Hylex hydraulic disc brakes, that is.

Archer Components’ DBR kit has just launched a conversion hack that puts a two-button wireless shifter pod inside the TRP Hylex brake lever body. That’ll send a signal to a chainstay-mounted shifter, which moves the cable leading to any standard mechanical derailleur. 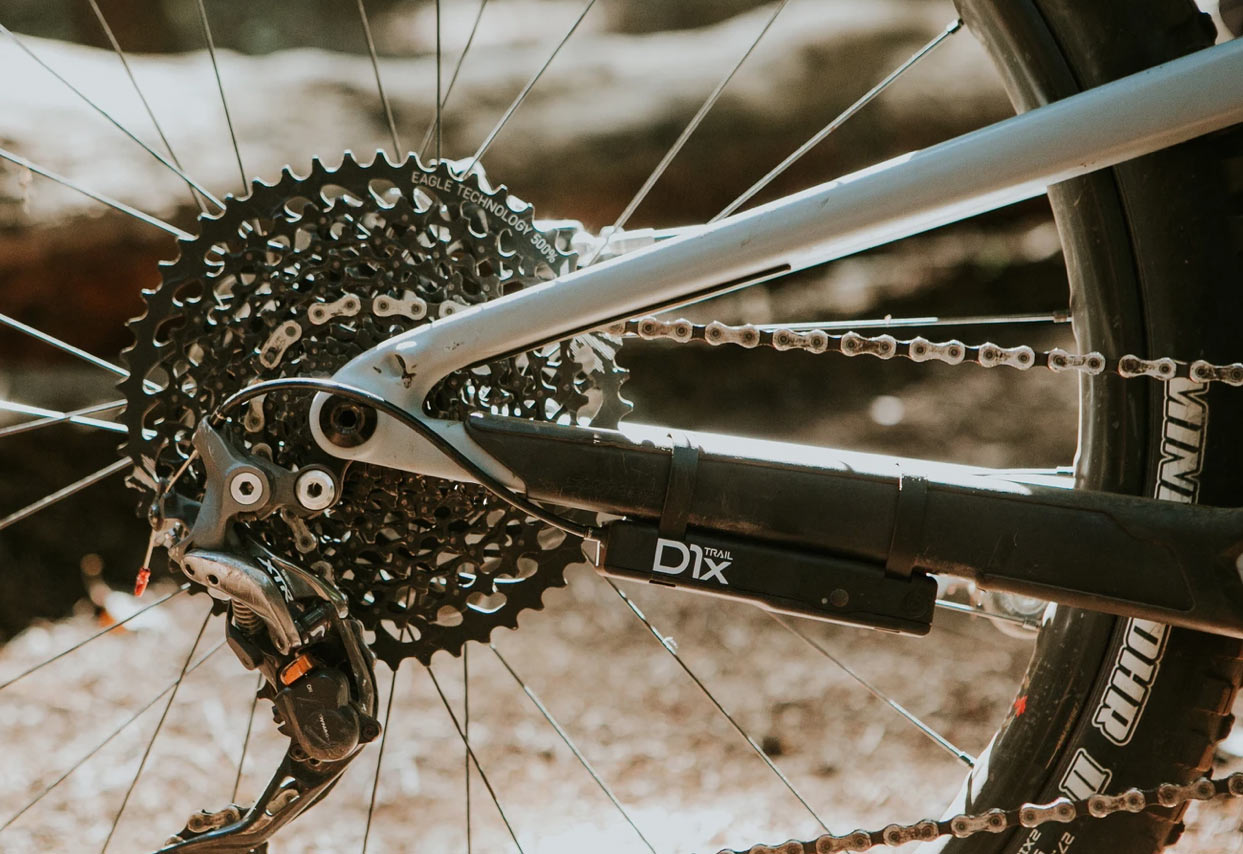 The D1x shifter unit is the same as used for their Trail kit, which uses an under-bar mounted wireless shift controller for flat bars. We’ve tried it on a mountain bike and it works great, and it can be custom tuned via there app for any number of rear cogs. 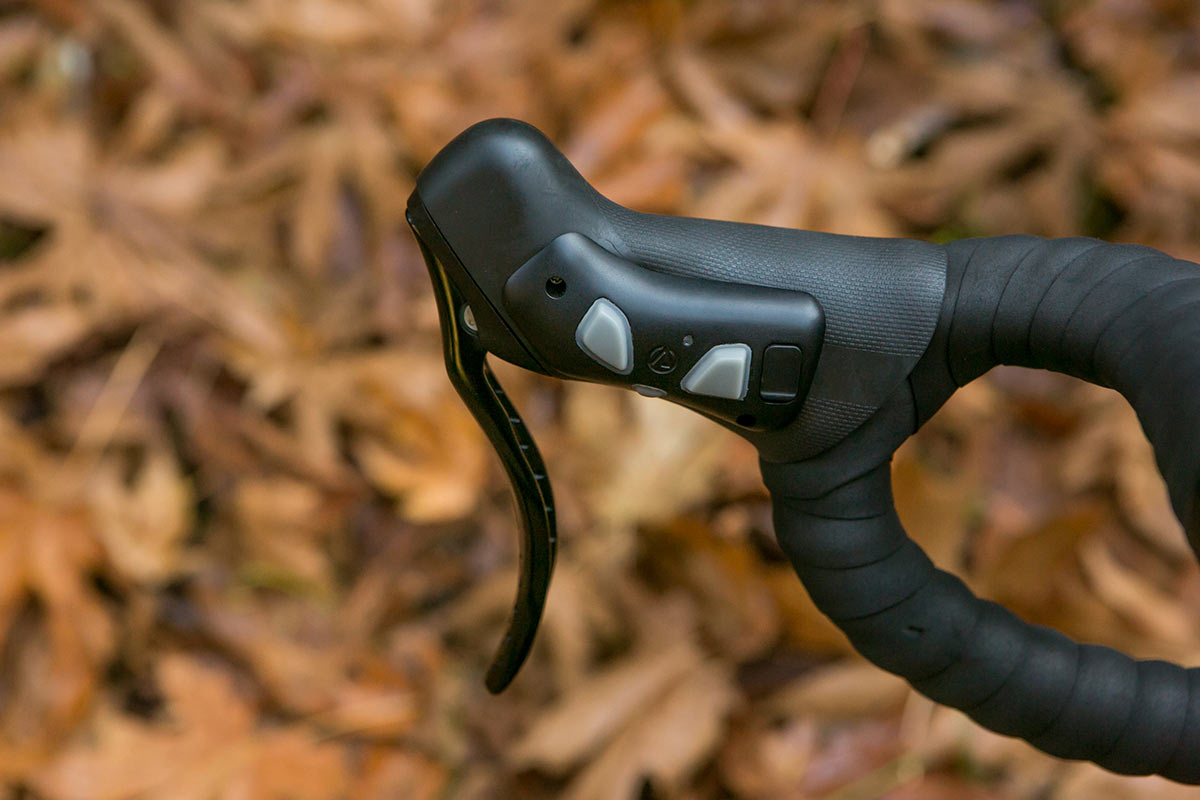 So, whether you’re building up a retro 8-speed or modern 12- or 13-speed adventure bike, Archer’s app will let you set individual cable pull/release settings for every cog. There’s even a micro-adjust button on the remote so you can fine tune once you’re out riding. 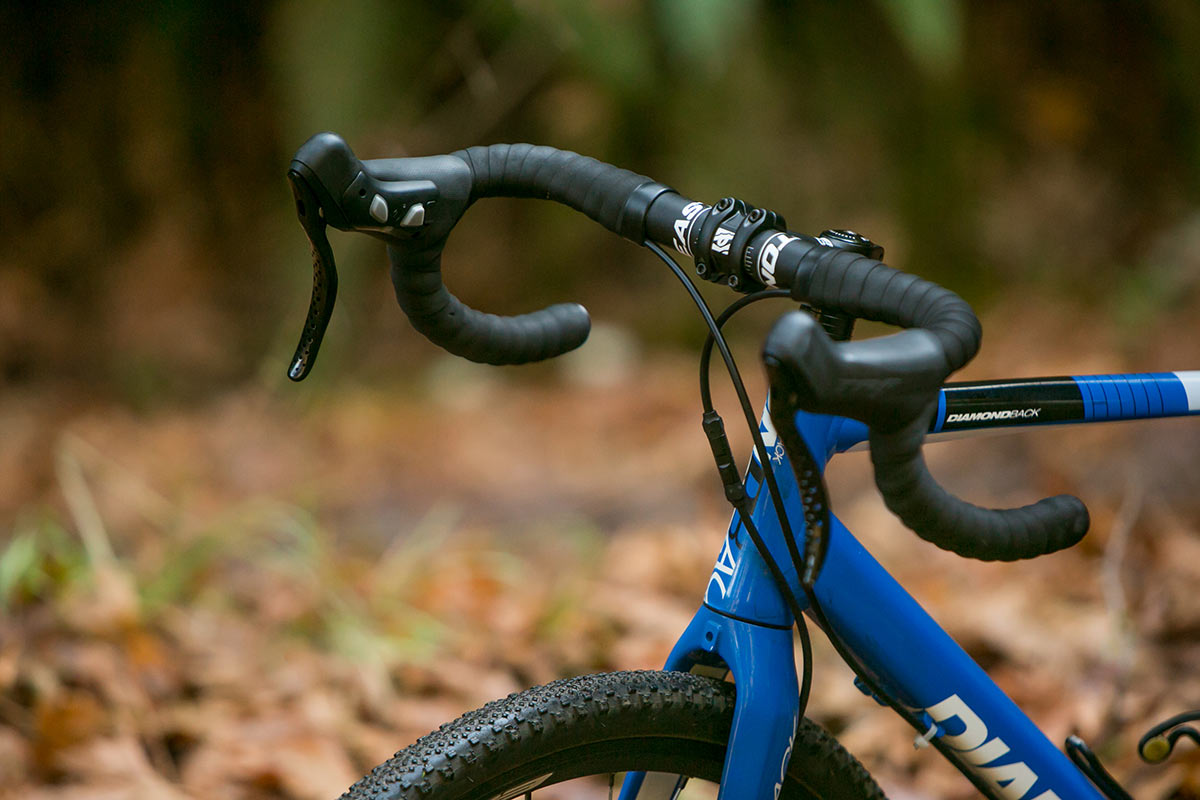 Even better, the DBR remote can be charged directly on the bike with a standard Micro USB port…and, hopefully, a very long cable. The D1x motor unit has rechargeable batteries that you pull out and recharge. 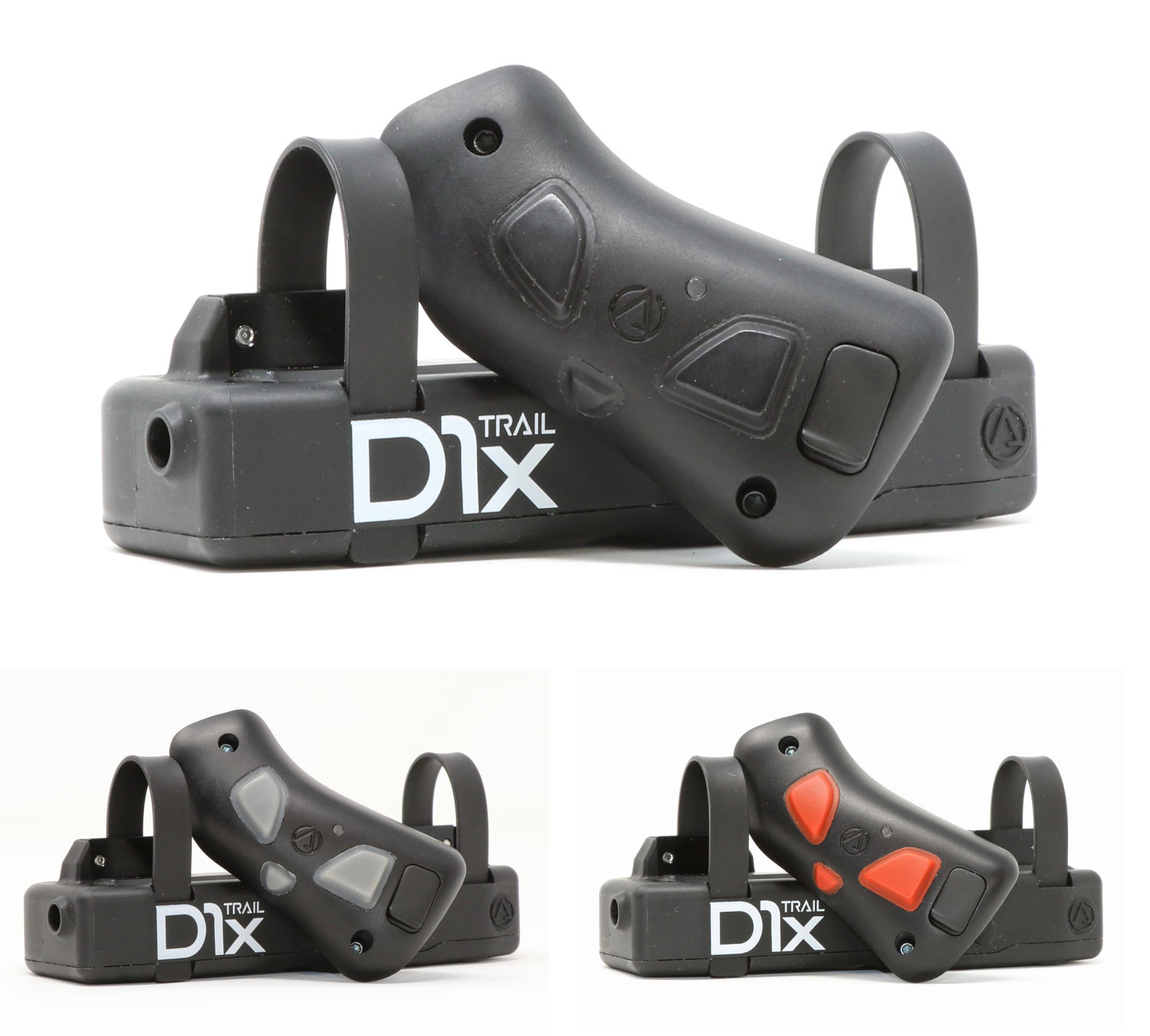 The Archer D1x Trail Shifter with DBR (Drop Bar Remote) kit will retail for $399, with pre-orders opening on December 21, 2020. The kit includes the Archer parts shown directly above, which integrates directly into the TRP Hylex lever, but not the brakes themselves.

If you already have the D1x shifting unit, the DBR remote will sell separately for $119. The first batches should start shipping mid-February, and eventually they’ll offer kits that do include the brakes, too.

Oh my. This actually solves a problem I have!

Now if they would only make something to convert wireless to good ol’ cable shifting…..

why would anyone do that?

Very cool, but they really need to improve the shift speed and latency of the system. I tried it out last year and felt that it’s still too slow compared to mechanical shifting. It doesn’t necessarily *have* to match DI2 or AXS shift for shift, but those should really be the benchmarks to shoot for.

Anyone have any idea when this is coming out? Seems like a way better solution.

I can’t believe these guys are still in business. Not saying it won’t work well, because I have never tried it. But it is beyond me why anybody would buy this over a good mechanical or electronic groupset.

You can now have wireless shifting and indexing for Suntour,
a massive market. Simplex too.
I may get one to try with a Osgear SuperChampion, wireless 4 speed shifting.

So i have to pay $200 for some TRP brakes, then i have to pay $400 for this thing, then i have to buy the rest of the drive train. so basically i have $600 into a set of brifters? that seems like really bad math compared to just buying a set of R8000 or R7000 shifters and brakes. Honestly if this went Di2 style and was a wired electronic i would be more inclined to like these but the delay in shifting response i have heard about is a hard no for me.

K-Pop is dangerous to your health
Reply to  Jeff

Yeah, no way I’m paying a dime for slower shifting. TRP has their own Di2 adapter so you can mount the R600 climbing switches on their levers for 3-4 years now. I’ve seen many road and gravel rigs set up this way, both 1x and 2x and people love them. If I was going electronic it would be that way.

True — They could just grab a (used) AXS rear derailleur and shifters off eBay, maybe an XDr freehub…. for around the same money. Neat idea — and nice problem solving but not sure it well sell in any quantity.

*their app, Tyler. Is about time you learned the difference.

The reason for riding mechanical: simplicity and being able to repair it yourself anytime anywhere. And no battery charging.
The reason for DI2: superb shifting performance due to servo motor always forcing your derailleur in exactly the correct position. Irrespective of how long it has been on your bike. Irrespective of clean or not so clean drive train.

This system: combining the need to charge with the shifting performance of a mechanical derailleur for the price of a DI2 drivetrain. Whilst at least loosing the simplicity of a mechanical drive train.

Brilliant, I’ll be out shopping soon.

I have no issues with shifting mechanically. Having said that, I do prefer the shifting performance of DI2/EPS/AXS over mechanical.
The only exception, as far as I’m concerned, is long bike packing tours.

how many times have we seen this? lol.

In fairness, one huge advantage this kind of thing has over AXS and DI2 is that it essentially doesn’t care what derailleur you have. If you break the derailleur, you’re not out $600-700. You’re not likely to break the shifter, because it isn’t hard-mounted to the frame. If/when somebody releases a 13-speed cassette, you just get the cassette and can spend as little or as much as you want on the derailleur to match.

I’ve been using the cell-cycling shifters for several years now. I can definitely level a bunch of criticism at them for various issues, but the big takeaway for me is that they’re fast and precise enough that I haven’t ever felt the need to go back to mechanical shifting.

I dont get the hate on this. This solves a huge hole in the market. I have been planning on building a “gravel bike” for sometime with a 11-50 cassette that I take either on the local group centuries or the local single tracks and I am not going to be buying a $300+ derailleur and also forced to buy a brifter I do not like. With this setup, I can get an average mtb derailleur and cassette of any brand and any speed and shred on mtb trails without worrying about destroying an expensive derailleur. I mean you could use 9, 10, 11, 12, 13 speed or even 8 or 7, the possibilities are so cool. But I guess there will be haters out there for being miliseconds slower at shifting, i mean like 95% percent of cyclists dont race, or have awesome di2 or etap, so lets just keep talking about that.

Wireless electronic shifting is just next-level. The precision is unmatched. Once you go wireless you can’t go back.

They actually work amazing well and you guys hating on it before trying trying it are missing the point. It lets you not get stuck on what hub driver you have dictating the rest of the drive train. Shimano cassette or any cheaper knock offs, Any speed, half sram half shimano, what ever you want and then what ever derailleur you want. It makes then all work together. On an MTB they are a great upgrade.