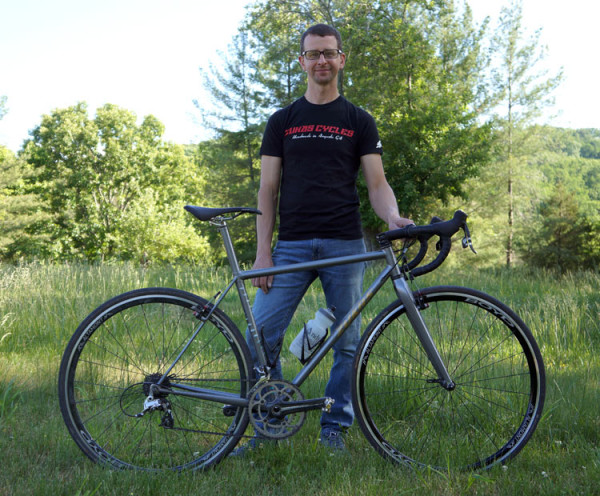 We first spotted Nate Zukas’ handiwork at the inaugural SE Bike Expo in Conyers, GA, and more recently at NAHBS. Among the builders present at Baller’s Ride weekend, he’s a relative freshman, but his work with steel earns him the entry. And his hardcore descending earned him eight flats for the day, an unenviable record for the weekend that came from flying past the rest of us with reckless abandon.

Like Sachs, Nate brought his ‘cross bike decked out with slicks. The bike’s sinewy lines and trick features made it one of the prettier bikes at the event, and that’s saying a lot. Check out the details of his personal ride below… 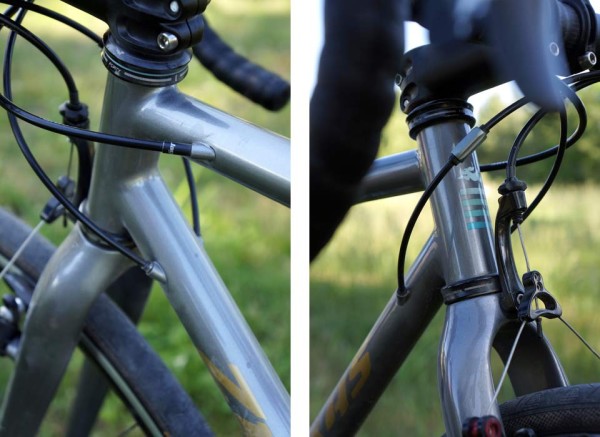 Simple, effective cable ports run everything internally. The Ritchey carbon cyclocross fork is one of a few still available with a straight steerer, and its thinner profile matches up with steel bikes better than most. It also offers tons of clearance. 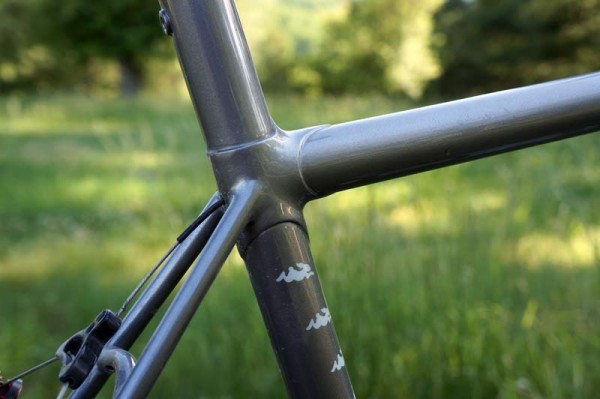 The seat tube junction mixes lugged assembly with brazed seat stays. Rear brake cable pops out between them, something only possible with a seat mast design. 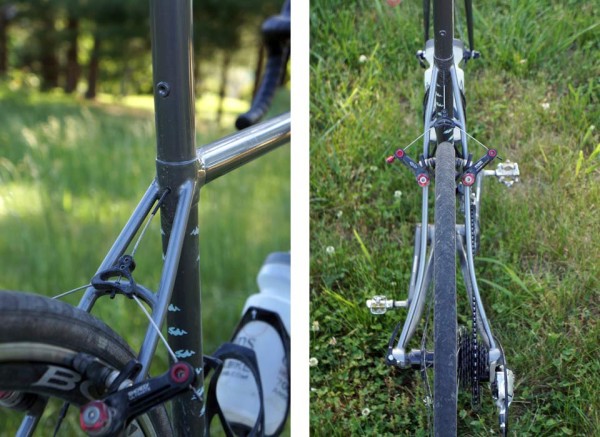 The bolt hole on the seat mast is for mounting a tail light, keeping the ultra clean aesthetic of the bike free of straps and clamps. One of Zukas’ signature designs are the ultra thin seatstays. Not every rider can get these (about 10mm diameter), but Nate’s light enough to ride them. Heavier riders need a bit larger diameters. 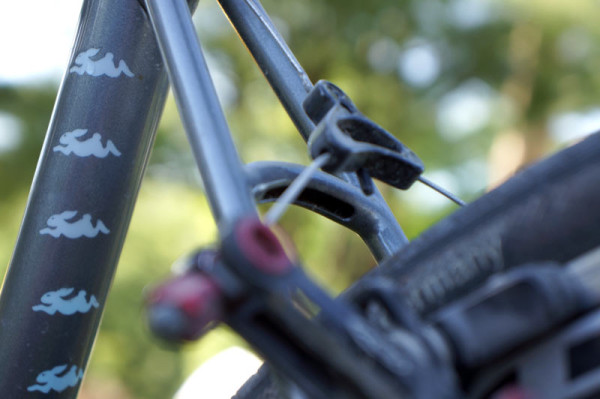 Plenty of all-but-invisible touches adorn the bike. The seatstay bridge’s underside was machined away – because he could. 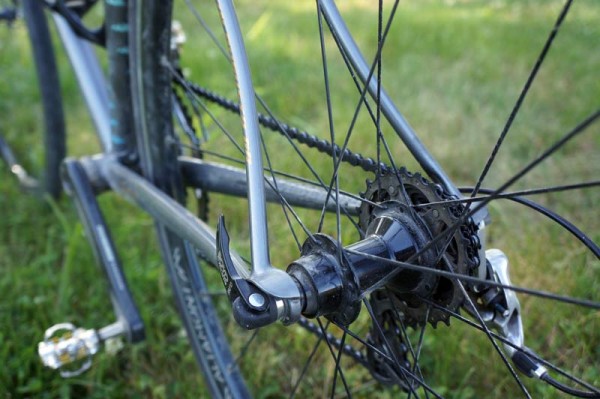 Breezer-style dropouts are popular among custom builders because they provide plenty of surface area for the stays and are easy to use. Nate’s wrap around a bit further than most, almost like a fender for the axle. 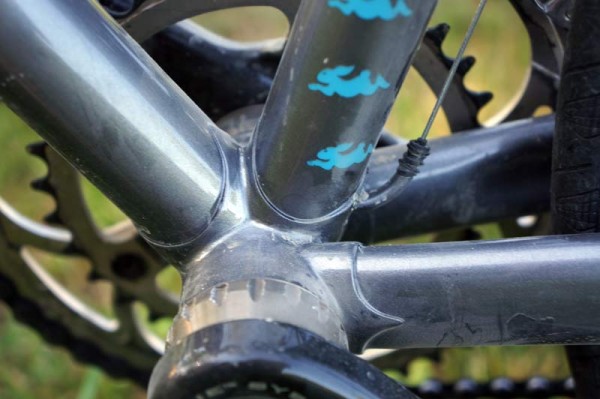 The front derailleur cable pops out behind the BB shell, keeping it hidden as long as possible. 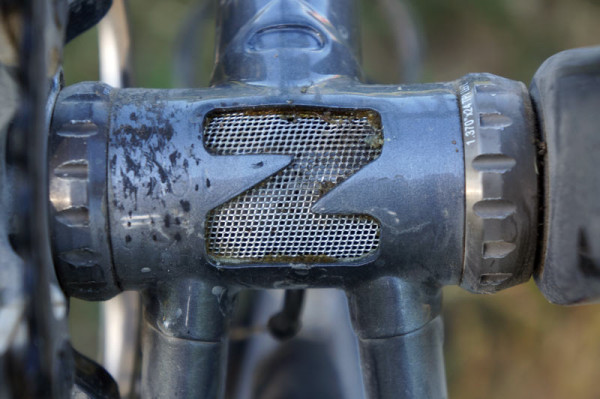 This was one of Nate’s earlier bikes. He’s since reduced the size of his Z drain holes by at least half. 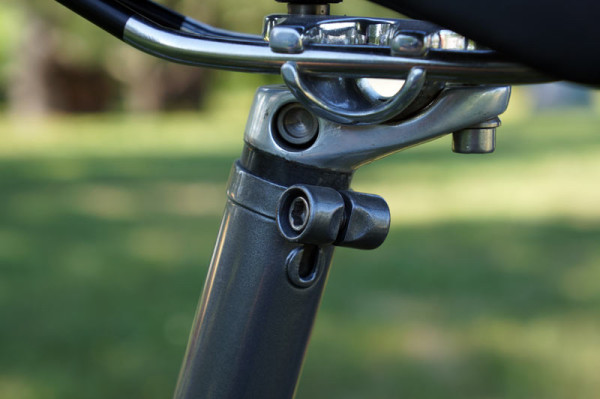 The seat post is cut very short to save weight without giving up enough adjustment to compensate for new shoes, cleats or shorts. 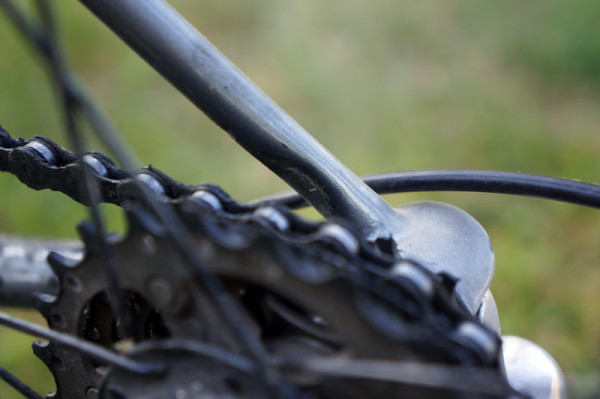 Drive side seatstay had a small divot to improve chain clearance on the smallest cog.

His bike was decked out with a mix of SRAM shifting and Campagnolo cranksets with Ritchey Paradigm pedals. Boyd hooked him up with wheels, which he dented on one of his bigger flats, and they were wrapped in too-narrow-for-this-ride Continentals.

I can’t find that fork on the Ritchey website, unless it’s a WCS with a custom drilled crown to mount the cable hanger. Could it possibly be a Whiskey fork?

I like it. Clean and simple with lots of small hidden features that just make sense.

That is a great looking bike and probably a very nice ride. Looks like a nice mix of traditional construction with modern touches.

Why does he run run such pinner tires?! I put some 38s from Compass on my ancient Rivendell and I can fly on off-road descents and use crap dual pivot brakes! I am able to rock Open Pro rims from the last decade as well! And I’m fat! (170Lbs+)