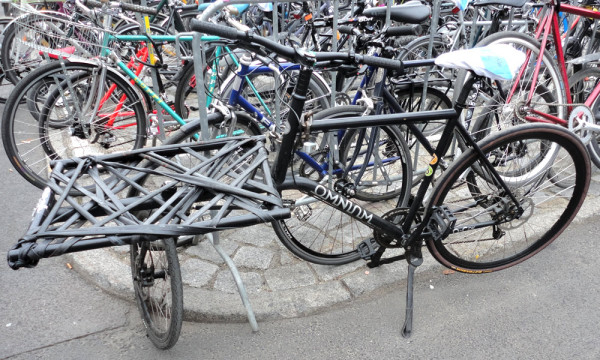 For another year the moment we set foot (tire?) in Berlin we started spotting cargo bikes everywhere. While it would be out of the ordinary to find cargo bikes locked up on the street in the states, or really even in Prague where we have our EU base, in several European cities they are all over the place. There is a sizable number of people who truly replace cars with cargo bikes, and many delivery companies that find them more convenient or affordable than cars. The first we ran into at the show wasn’t even from an exhibitor; it was this Danish Omnium Mini-Max (retail 16750DKK or ~2250€) that was locked up out front of the show in the sea of townie bikes of attendees. The Mini-Max is relatively short cargo bike at less than 2m long, and is often set up with a woven inner tube platform that gives both a shock absorbing rack surface and can strap down objects by just adding a few extra tubes.

We got some good feedback last year asking for more cargo coverage, so we are happy to oblige. Come past the jump for all variants of new cargo bikes, as well as the most appropriate application for e-bike drivetrains we’ve yet seen…

Cargo bikes at the show came in all shapes, sizes, and materials. The colorful blue and orange Italian steel Bicicapace is another short option at 1.7m, based around a large 70 liter porteur-style front bag that can haul 30kg/66lb of gear. The base model is right at 1000€ with a 3-speed hub, but you can also add accessories like this Family model to carry two kids in child seats for about 150€ more. The DHL bike is called their DHL Parcycle, and is one of their local delivery bikes based in Berlin and Frankfurt. Built on an aluminum Bullitt platform with a 140l lockable Convoy Box, this one joins DHL’s fleet of delivery bikes in 24 cities in 9 European countries so far, with talk of continued expansion. DHL says that they are able to deliver faster in the city, where traffic isn’t really an issue, and they can always park right at the door to their destination. The long beer crate-hauling contraption is a custom made tiger bamboo cargo bike from Ozon Bicycles of Berlin. Ozon builds custom bikes and offers technical courses where one can learn to build your own bike by flax-fiber wrapping bamboo tubes together to build anything you can imagine. 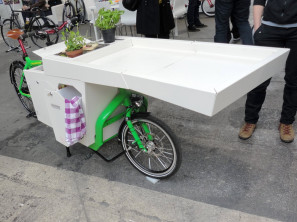 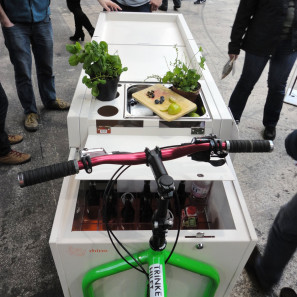 One unique aspect of cargo bikes is really in their customization to fit the end-user’s need. Unlike a typical custom bike, where you are looking at geometry, colors, and components, with cargo bikes it is what you are going to build on top of the bike. Another Berlin shop, Rhino produces custom fitted cargo boxes out of aluminum and composites that can serve for example as mobile showrooms or food carts. This café box is more than 300l and folds out and slides open to reveal a 1.7m long table top with a built in sink, food prep area and supply storage underneath all balanced on the Bullitt platform’s center stand. Perfect to serve beers at a trade show or make fresh Basil Lime Coolers.

A look at the components on some of these cargo bikes can be a bit surprising. While there are a lot of internally geared hubs and pretty basic drivetrains, pushing around almost 200kg/440lb of bike and cargo can be hard on gear, so some opt for more tough stuff. This Bullitt that German lock company Abus uses is built up with a full-on downhill ready Shimano Saint drivetrain, including the quad piston calipers and 203mm rotors. I guess it could handle some stair riding or cities with more hills than Berlin. 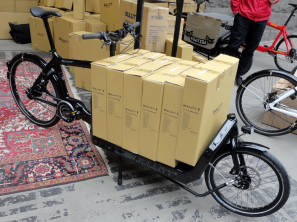 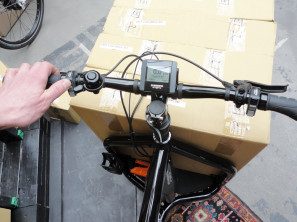 A good number of our shots have been of the modular 2.4m long Bullitt cargo bike system from Danish bike builders Harry vs Larry (yes that is the actual company name, although most just refer to it by the Bullitt bike’s name.) The reason is they build the benchmark cargo bike platform that starts just under 2000€, but can easily climb to over double that when you kit it out. They’ve had some e-bike system options in their builds for a while like Bionx hub-based motors, that were actually cheaper than an XT build, but now they have a new 4200€ eBullitt build with Shimano’s STePS Di2 system that includes the smart controls with an Alfine Di2 hub. The folks at the show weren’t entirely sure about the autoshifting functionality of the system, but the spec sheet and the feedback we had gotten from Shimano seem like this can be the case. The biggest praise the guy who is actually riding this eBullitt around the city had to say was about the auto-downshifting. When you stop at a light with a loaded cargo bike, the fact that the hub automatically drops down a few gears makes restarts much easier. 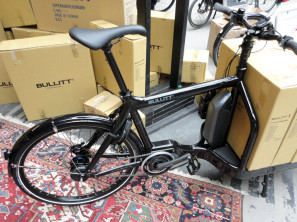 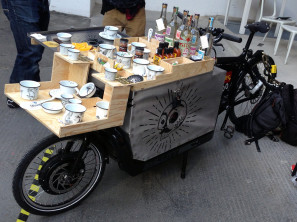 As much as e-bikes can be controversial, this is where they really make sense. Whether you use a crank-based system like STePS or Bosch or one of the many front or rear hub-based motors, the obstacle of motor+battery weight is not a major issue on cargo bikes. And while a cargo bike is surprisingly easy to keep moving once you get going, getting up from a stop is tough; e-bikes to the rescue. 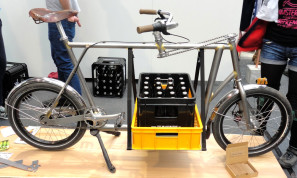 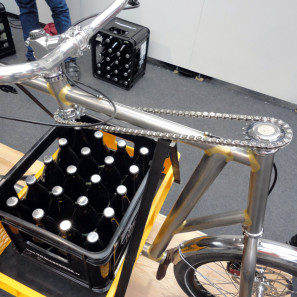 Most cargo bikes are based on a modular frame or platform and then are customizable, but some frame builders do full custom as well. KleinLaster from Halle, Germany whose name directly translates as Small Truck only build cargo bikes and developed a 20″ small wheeled cargo bike that is just 1.7m long but has the hauling capacity of the larger long-john style bikes. The KleinLaster carries cargo on a foldable platform, partly suspended by straps from the fillet-brazed steel frame, with weight more balanced in the center of the bike. 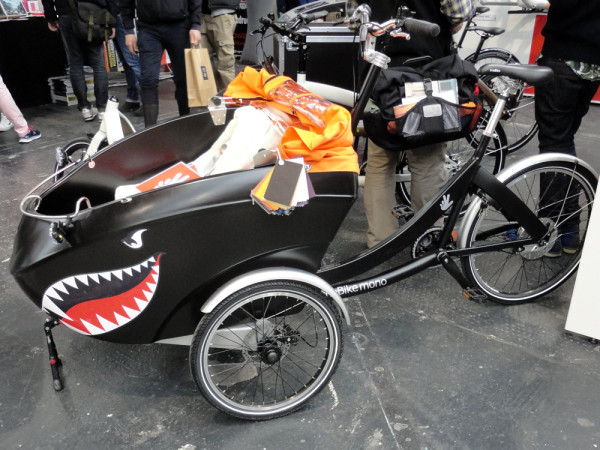 Another cargo bike giant, strangely also from Copenhagen (OK, not surprisingly since the Danes use these things a lot!), trioBike has been known for their 3-wheeled trikes and modularity. This 2300€ shark-toothed Trio Mono with its ABS-sandwich box construction is one of the lightest and the safest way to move kids on a bike. It can seat 2 kids, even an infant, or haul a bunch of groceries in that big box, which also can have a waterproof fabric roof. 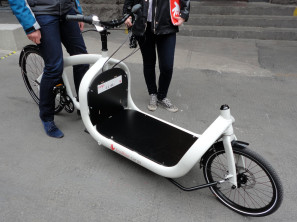 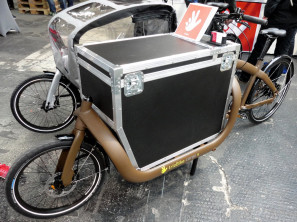 But after leading the 3-wheeled sector of the cargo market, trioBike has made a big development push to go head-to-head with Larry and Harry with their new two-wheeled long-john style TrioBike Cargo. The base level starts at 2200€ with an 8-speed hub and tops out over 5k with an outfitted e-bike version. Pre-order one now for delivery in about 4 weeks. 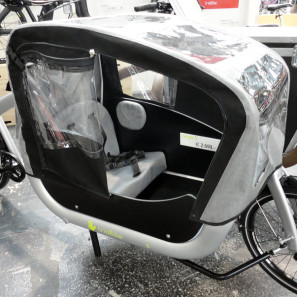 The solid aluminum frame, a mix of cold formed tubes and machined yoke and dropouts, is also available as a frame kit for 1600€ (their website lists this lower price than our photo) so you can tailor it to your individual needs or desire. The bike has interchangeable sliding rear dropouts and is compatible with 26″, 27.5″, or 700c rear wheels. The frame was designed to better transfer weight higher in the frame through the big swooping wing tubes for better stiffness, handling, and durability. Build out accessories include standard stake-bed cargo Panels, a kid Seat with optional Hood, and an air-cargo-like Flight Case Box that can even be insulated. Plus, there are always belt-drive, fully-geared, and e-bike versions.

From the looks these were getting at the show from other cargo bike riders, we expect to see several parked out front next year. OK, that wraps cargo coverage. It isn’t likely that we will be doing any long-term tests of these anytime soon, but if anyone wants to know or see more let us know in the comments and we’ll keep our eyes open.

We even have nationals in cargo bike.

Good fun and a lot of action 😀

The Bullit seems to be the preferred bike to use 🙂