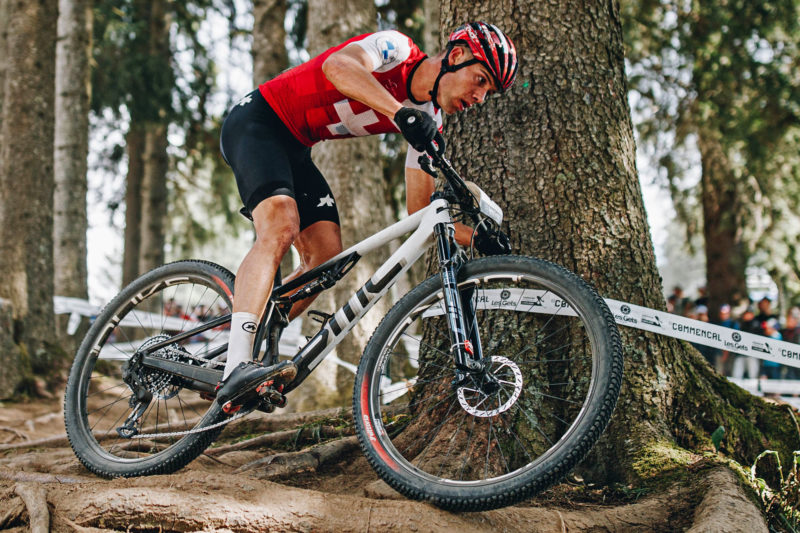 BMC’s full-suspension XC Fourstroke mountain bike looks set for a complete redesign if this prototype raced at MTB Worlds with the new SRAM Eagle AXS is anything to go by. Plus, BMC seems to have casually let slip a real timeline for the launch of that next-gen direct-mount SRAM Eagle AXS derailleur prototype we spotted on Nino’s Scott. 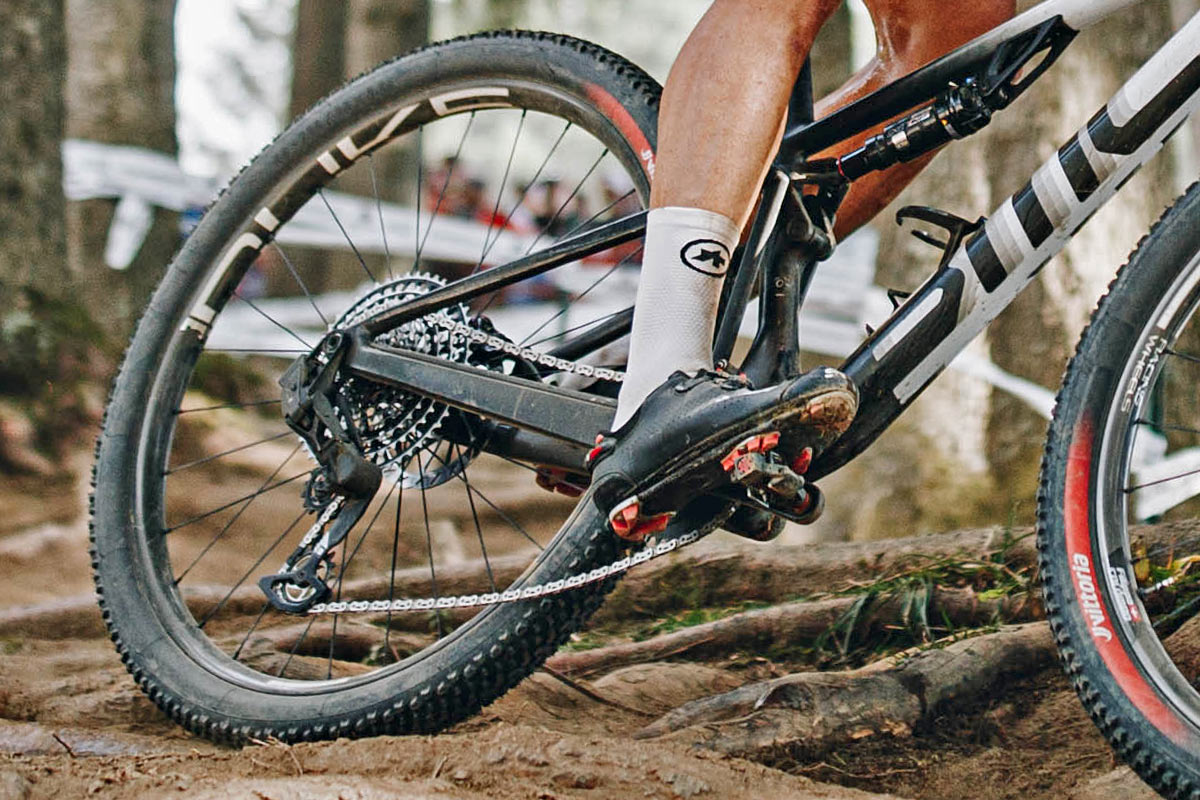 At the UCI XC MTB World Championships last weekend in Les Gets, a couple of riders from the BMC MTB Racing team were spotted on a new and as-yet-unreleased carbon BMC Fourstroke prototype XC mountain bike, with all-new tube shaping and a reoriented shock layout.

Plus, the bikes of these two racers also appear to be built up with the same direct mount BlackBox SRAM Eagle AXS derailleur prototype, the same hollow plate Eagle FlatTop SL (T-Type) chain, and same new XX1 SL Eagle cassette with 3 machined alloy cogs that we spotted on N1N0’s bike.

Check out our Pro Bike Check of 10x World Champion Nino Schurter’s setup for the full details of everything we know about that prototype SRAM Eagle AXS drivetrain – the patents we’d uncovered years back, the expected performance gains, and UDH compatibility. 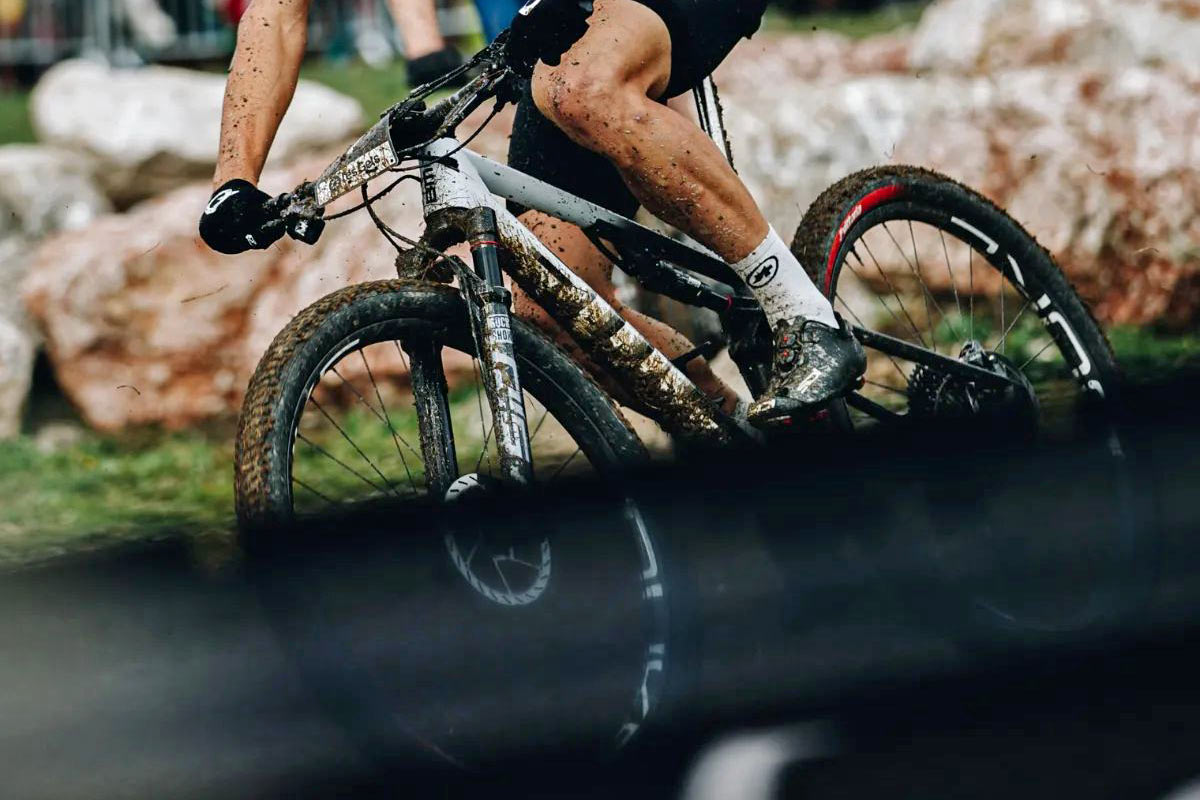 Both Filippo Colombo & Titouan Carod were on the new BMC Fourstroke prototype, with Filippo earning an XCC podium & an XCO top ten on the unreleased bike.

Interestingly of note, Pauline Ferrand-Prevot opted not to ride the new bike, but to race the BMC Twostroke carbon hardtail instead, in order to benefit from lighter weight and improved efficiency for the Les Gets climbs. That seemed like a good call as she went on to win the World Championship title in both short track XCC and Olympic distance XCO.

What do we know? BMC Tech details 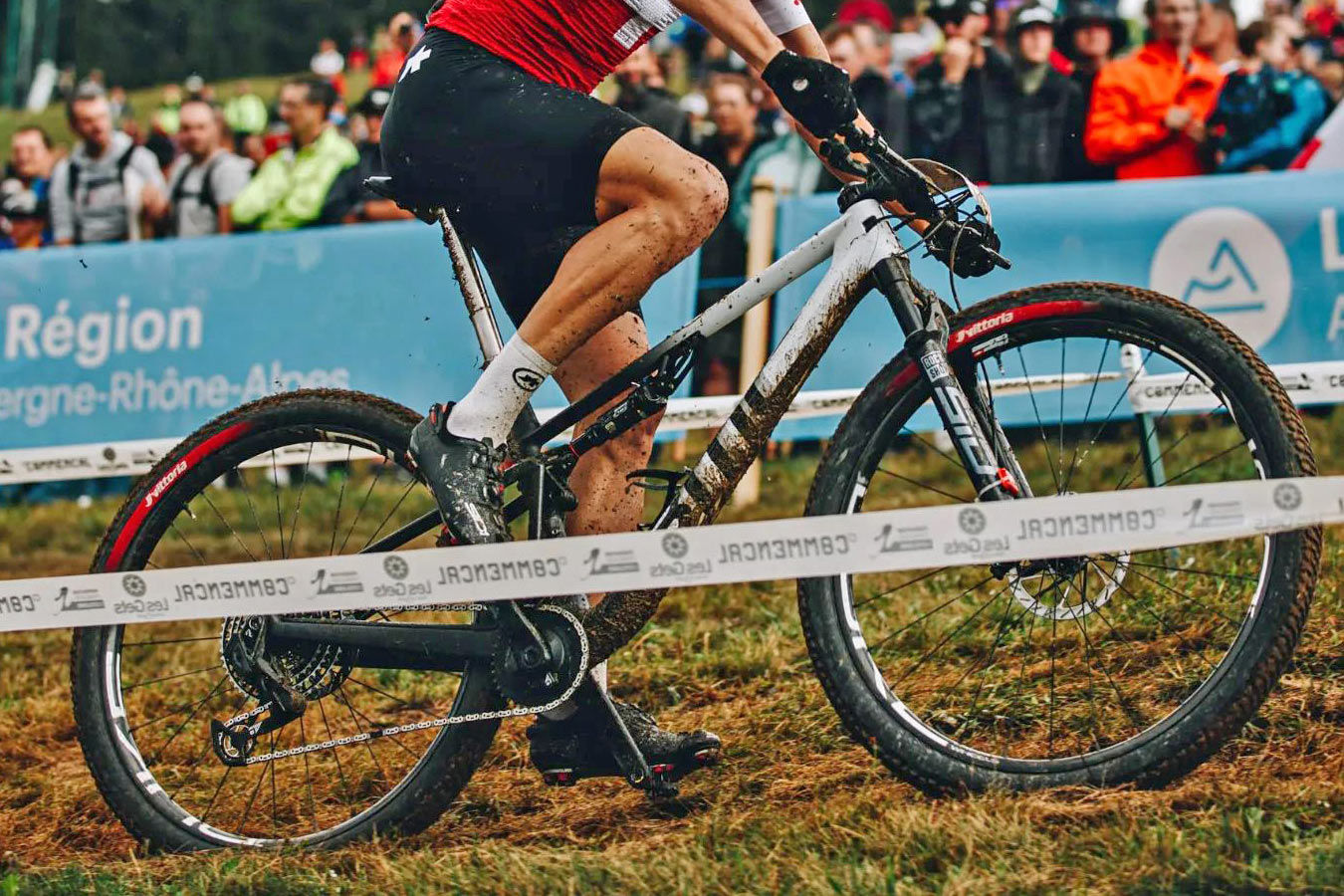 BMC hasn’t shared any details on the new bike yet. But the most obvious shift for BMC who long held the opinion that a vertical shock orientation yielded the best performance… the unreleased BMC Fourstroke prototype moves to a horizontal shock layout.

It still appears to be a short-link virtual pivot-style 4-bar with a unified rear end (not exactly a URT as it doesn’t include the BB) and a tiny rocker driving the shock. But now the rear triangle has moved to a more symmetric design with a vertical strut connecting seat & chainstays on both sides of the bent seat tube, and a post mount brake now on the seatstay. 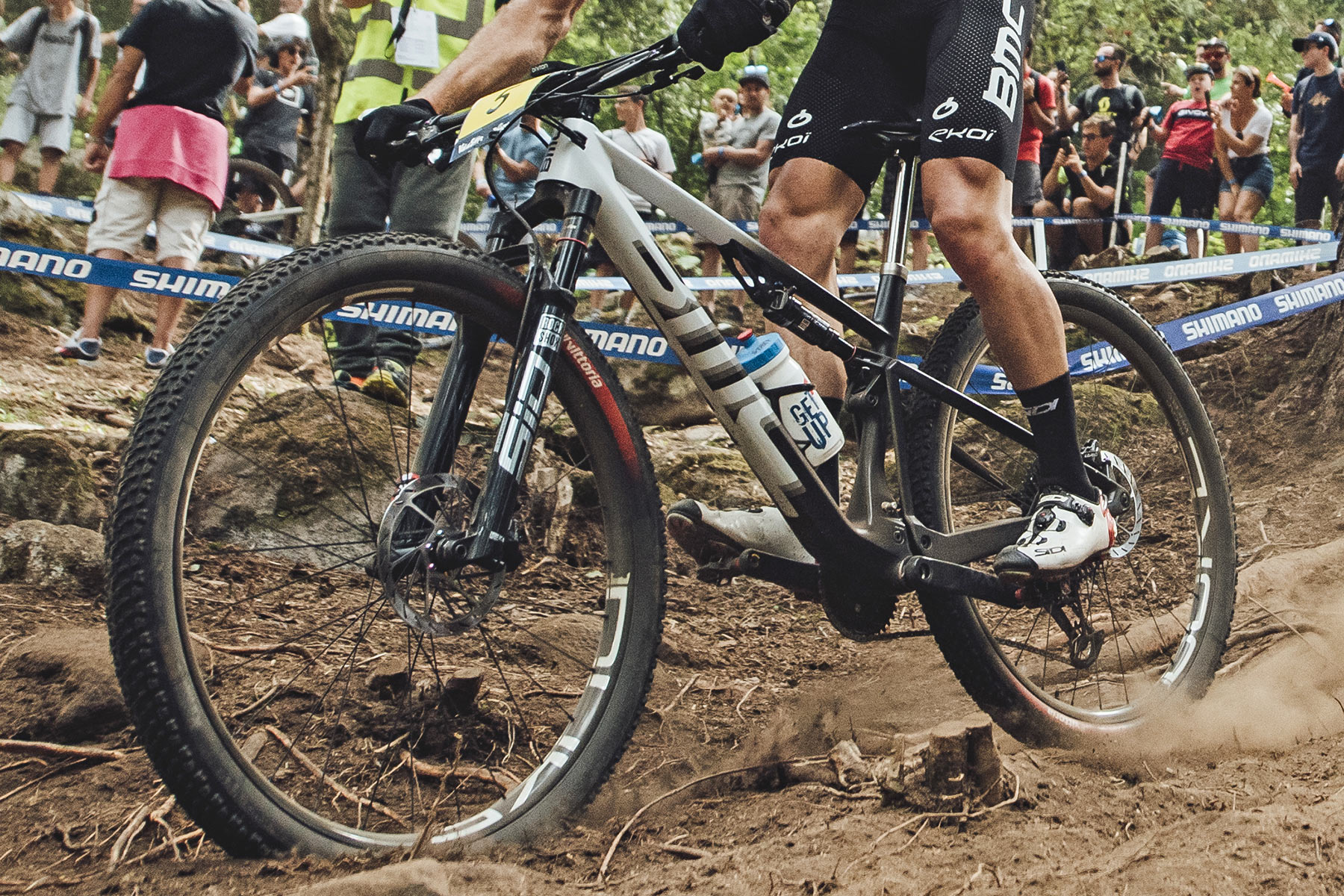 The downtube drops a bit at the bottom bracket, presumably to make more room inside the main triangle. These Fourstroke prototypes we’ve seen do not appear to include a cage mount on the seattube. But they do seem to have 5 water bottle bosses on the downtube. The racers at Worlds had just one bottle cage in the second-to-lowest position, but this surely would allow for 2 bottles or a bolt-on tool/spares carrier below a full-size water bottle? 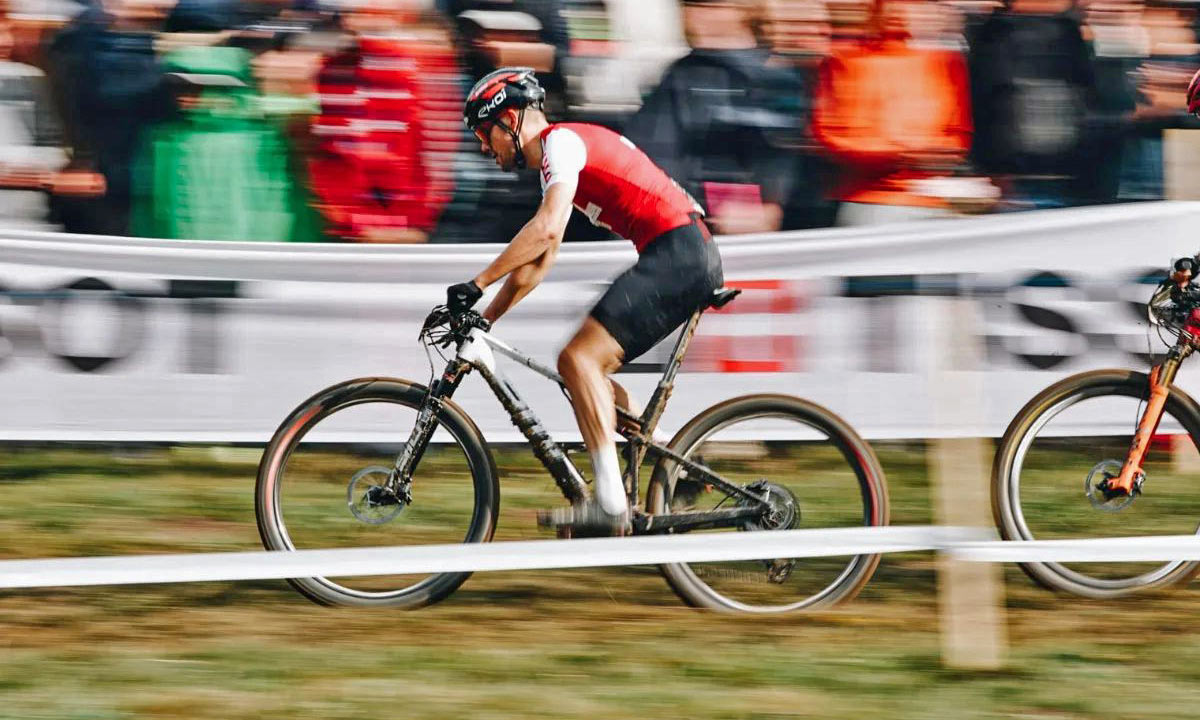 The new BMC Fourstroke prototype gets a steeper sloping toptube more in line with the seatstays and looks to feature more boxy tube shaping in its rear end, with the same pointed seatstay caps & hidden hardware. Up front, the main triangle is a bit more rounded than the current angular bike. The new bike retains the short-travel integrated RAD elliptical dropper seatpost, now in shiny silver ano, and moves its internal cable routing from the bottom of the downtube, up to the sides of the headtube.

And of course, it moves to the new UDH-compatible (?) SRAM direct mount rear derailleur. 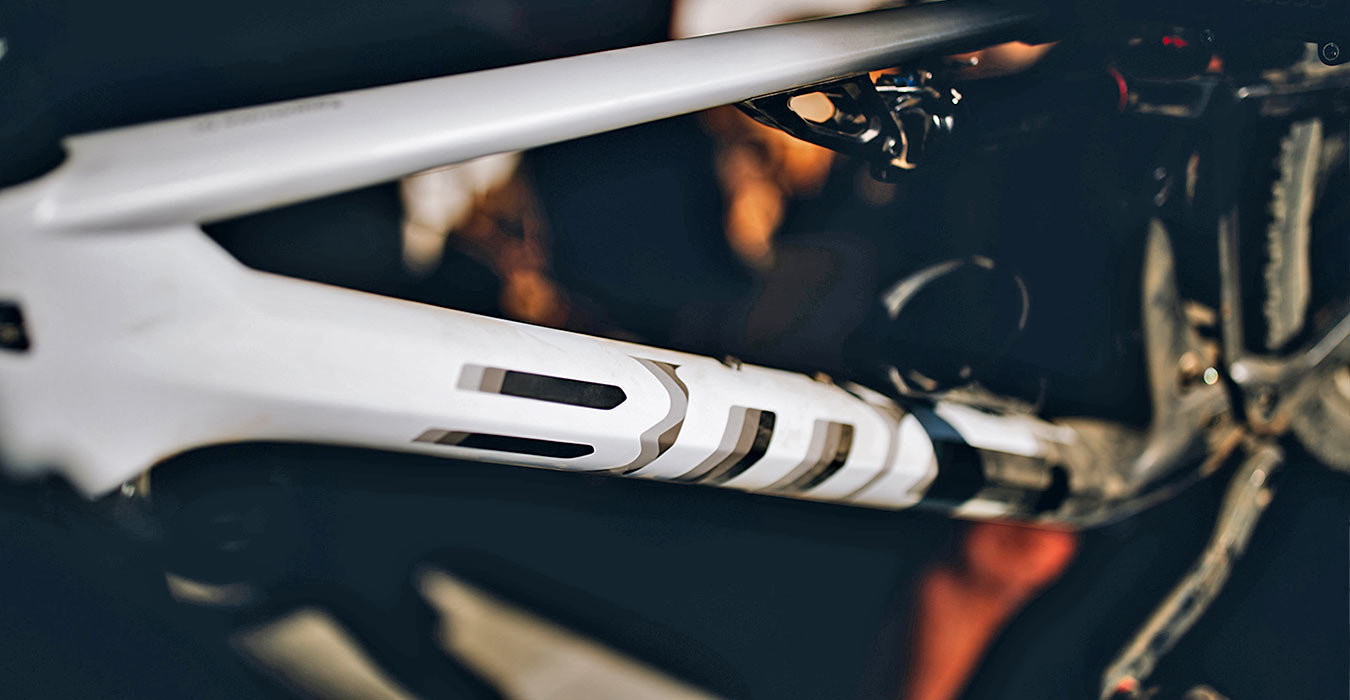 Even though it is a completely different suspension design compared to the current Fourstroke, we’re pretty sure it will keep the same name. How? These teaser images on BMC’s homepage are named “Fourstroke”.

BMC isn’t really hiding the unreleased Fourstroke prototype very much either. In fact, the new bike is on their homepage now, and you can sign up to be one of the first to get the full details:

“Spot something special in Les Gets? Sign up to be the first one to know.“ 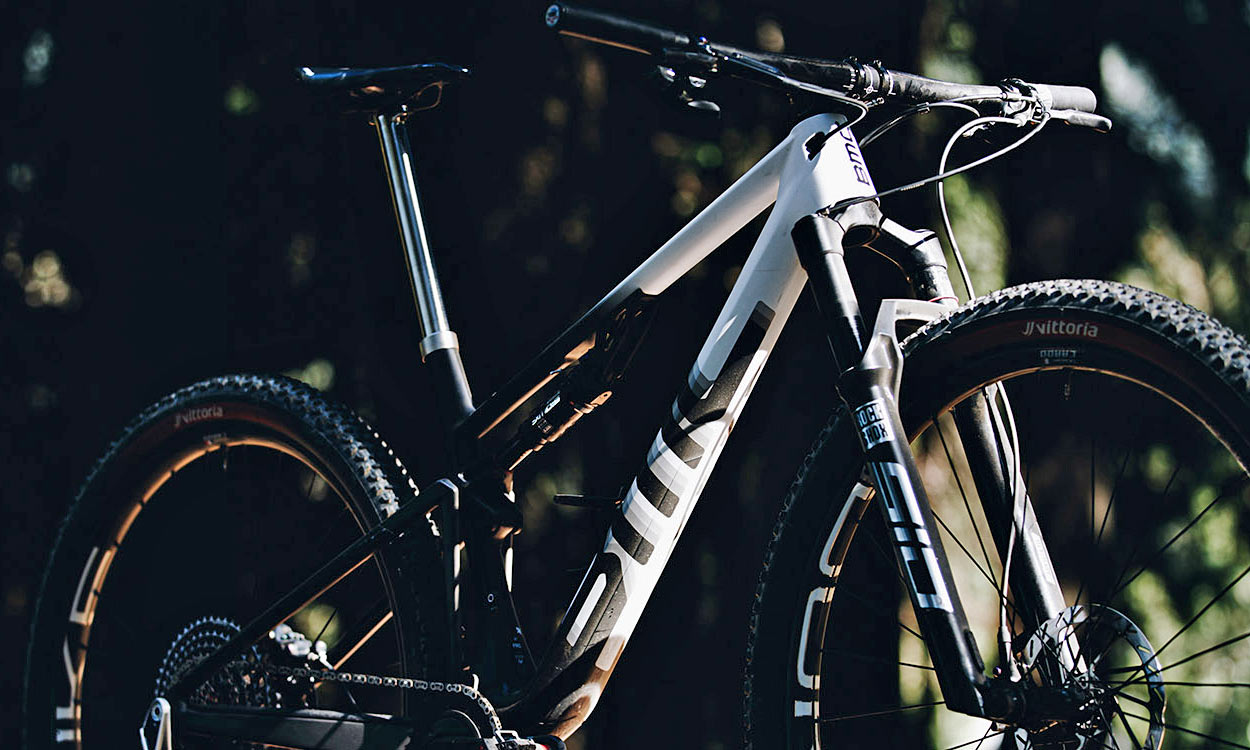 Clicking BMC’s “Tell me more” button takes you to a page called “The Final Countdown” with a clock counting down just over a month left until the October 5th unveiling.

And see what’s peeking out of the bottom of that photo above at the end of the new Eagle FlatTop SL chain?

But instead of being stealthy all-black like the BlackBox prototypes on Filippo Colombo’s new bike or the one raced by Nino Schurter… this one has polished alloy on the upper B-knuckle direct mount. That looks a lot like a finished consumer-ready product. So, it sounds like SRAM is going to have to launch it before Oct 5, 2022 if this new BMC goes live in just 32 days.

Good to see the prefered swing link suspension design, but the unifed rear triangle (URT) is just stupid. This bike is going to rattle your fillings out on the high frequency chatter bumps as their not going to be compliance in the rear seatstays. Also there is limited ankle clearnce. Considering the swing link suspension design is now the dominate XC bike design the BMC is going to have a lot of competition from the likes of Specilized, Canyon, Cannondale, Rose, Momsen, and Megamo.

@alloycowboy the name URT used in bike suspension refers to something completely different (more info here http://ffden-2.phys.uaf.edu/211_fall2010.web.dir/Michael_Stanfill/UnifiedRT.html). The article mentions a short-link 4-bar. It’s not because you don’t see it on the pics that there’s no lower link to attach the rear triangle. it wouldn’t work otherwise without any flex built in or an eccentric to drive the shock like on a Santa Cruz Tazmon from bacon the days.

Hey Fred, thanks for the comment, your right URT originally refers to the John Castellano Sweet Spot design that Ibis manufactered for a while. However in this case we are just using the term to mean that the seat stay and chainstays have a third member that connects them. Orginally these additional member was required because of the Specialized patents on four bar suspension, however those patents have now lasped so these additional members are now redundant.

Small/high frequency bump compliance is still a function of shock tuning + flex in the system, same as it is if the chain stay and seat stay are isolated from each other with a pivot. Makers are finding they can omit the pivot because the movement is so small as to be barely noticeable. Usually short travel XC bikes have poor small bump compliance because the shocks are tuned with heavier compression damping to reduce pedal induced movement (and because they’re short travel). Most of these choices are driven by the desire for light weight. This shouldn’t be any worse than any of those others you’ve mentioned.

The only Unified Rear Triangle suspension platform that was worth a hotdamn was GTs. The rest are trash. Hopefully a misunderstanding and its still a vpp.

iDrive wasn’t even properly a URT. It was high-single pivot with a floating bottom bracket. URTs have the bottom bracket mounted firmly to the same piece as the wheel. iDrive worked because it wasn’t a URT.

I guess when l think of urt l think of those old Kleins, Schwinn’s, Y bikes and such where the bb is attached to the swingarm. Thankfully this appears to be none of those!

BB mounted on a swingarm was one of the dumbest things ever – not only You didn’t get any rear suspension while standing on pedals (since they’re mounted to the moving part), but also it made the distance between BB and saddle change constantly.

Apart from that – anyone else thinks the new sram drivetrain sucks? What’s the point of releasing it if it doesn’t bring any advantage over the previous one?

URTs don’t give zero suspension when standing, but the leverage ratios change dramatically. They were good if you wanted a single speed suspension bike, but not that good. They only survived as long as they did because of the quality of shocks in the era.

It is now November and new BMC is released without new axs. Now all the in action race pics exposing the new derailleur are obscured, either non-drive side to even a photo shopped blade of grass LOL.