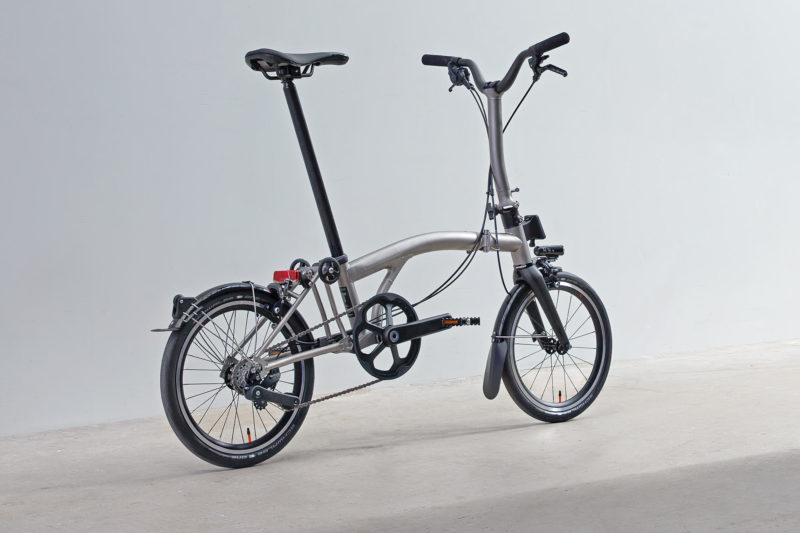 Brompton has built light mixed steel & ti folders before, but their all-new full titanium T-Line folding bike takes city commuters to the next level, with weights as low as 7.45kg. To get there, Brompton welds the T-line’ with a titanium mainframe, ti rear triangle & ti extended stem in the UK, plus a steel-reinforced carbon seatpost, their first carbon cranks, and wild 60g rear derailleur.

It’s the lightest ever Brommie folder at 7.45kg, as light as many modern carbon road or gravel bikes, and will likely last forever thanks to corrosion-free titanium. Its frame is 37% lighter than the steel version, yet still rated for a 110kg rider. 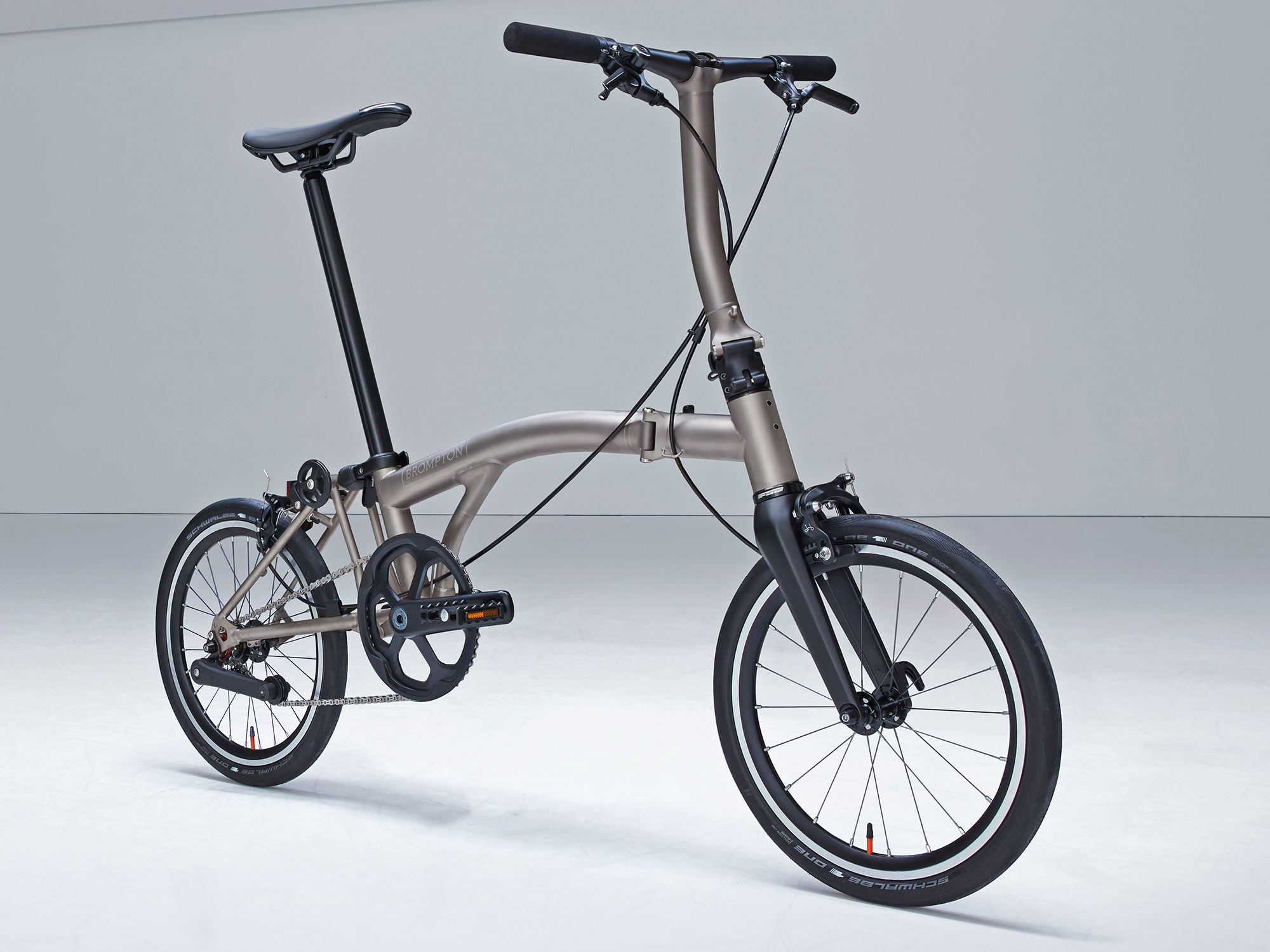 We could stop there, and that would likely sell a bunch of city commuters on the idea – at least those with thick-enough wallets. But the new titanium Brompton T-Line folding bike is actually super interesting from a technical perspective, as well. 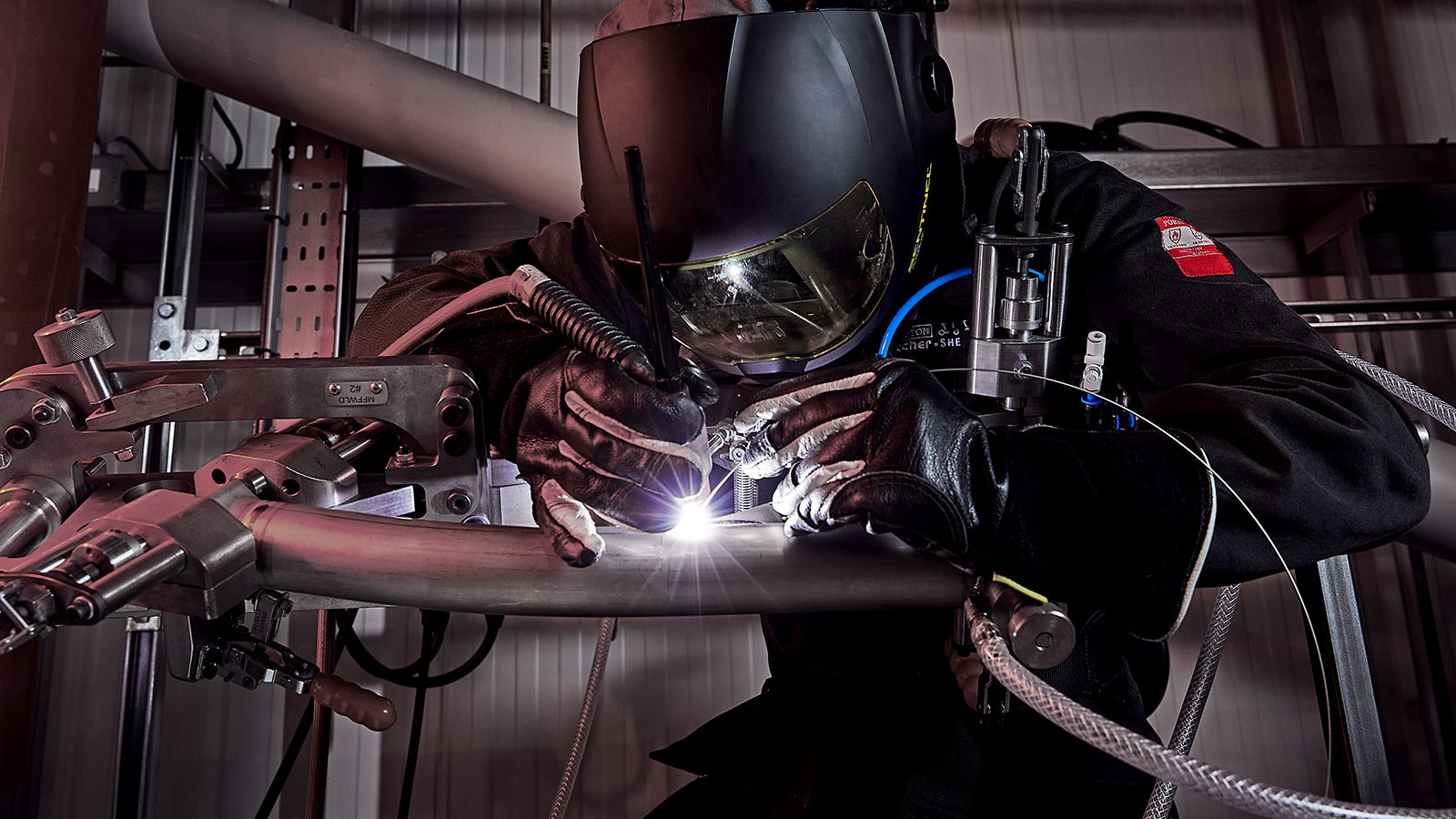 There’s plenty of all-new tech tucked inside this matte grey folding super-commuter city bike. Brompton says it’s the culmination of three years of R&D figuring out how to take their folders to the next level. And it even required building a new Sheffield, England manufacturing facility to craft the new bike and its 150 new component pieces. 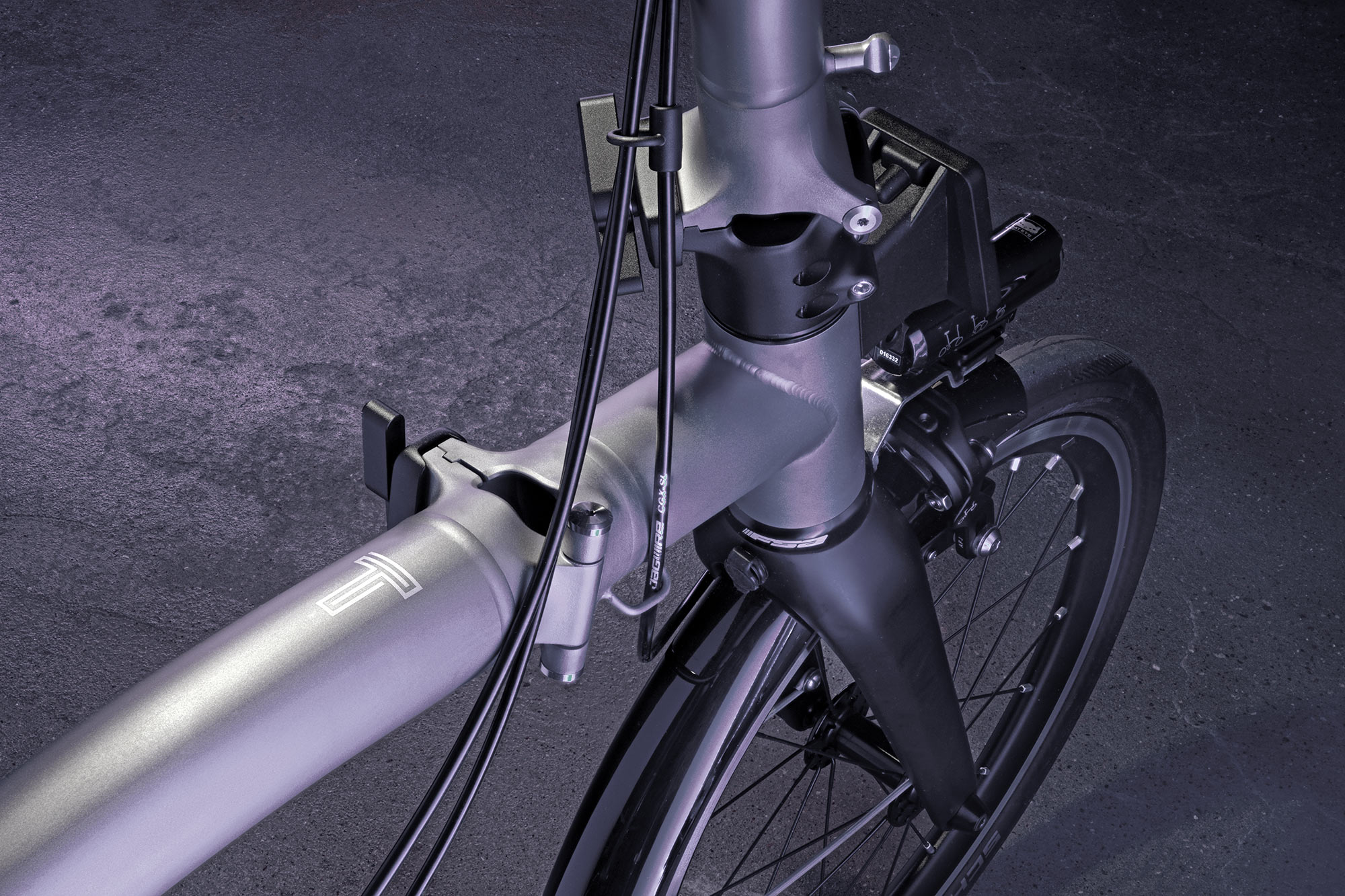 The large-diameter welded Grade 9 titanium frame gets new self-aligning hinges that promise faster folding & unfolding. There’s also a new spring-loaded catch for easier handlebar folding, and bigger rolling wheels for better mobility when folded. They say, “Nothing folds like this Brompton, not even other Bromptons.” 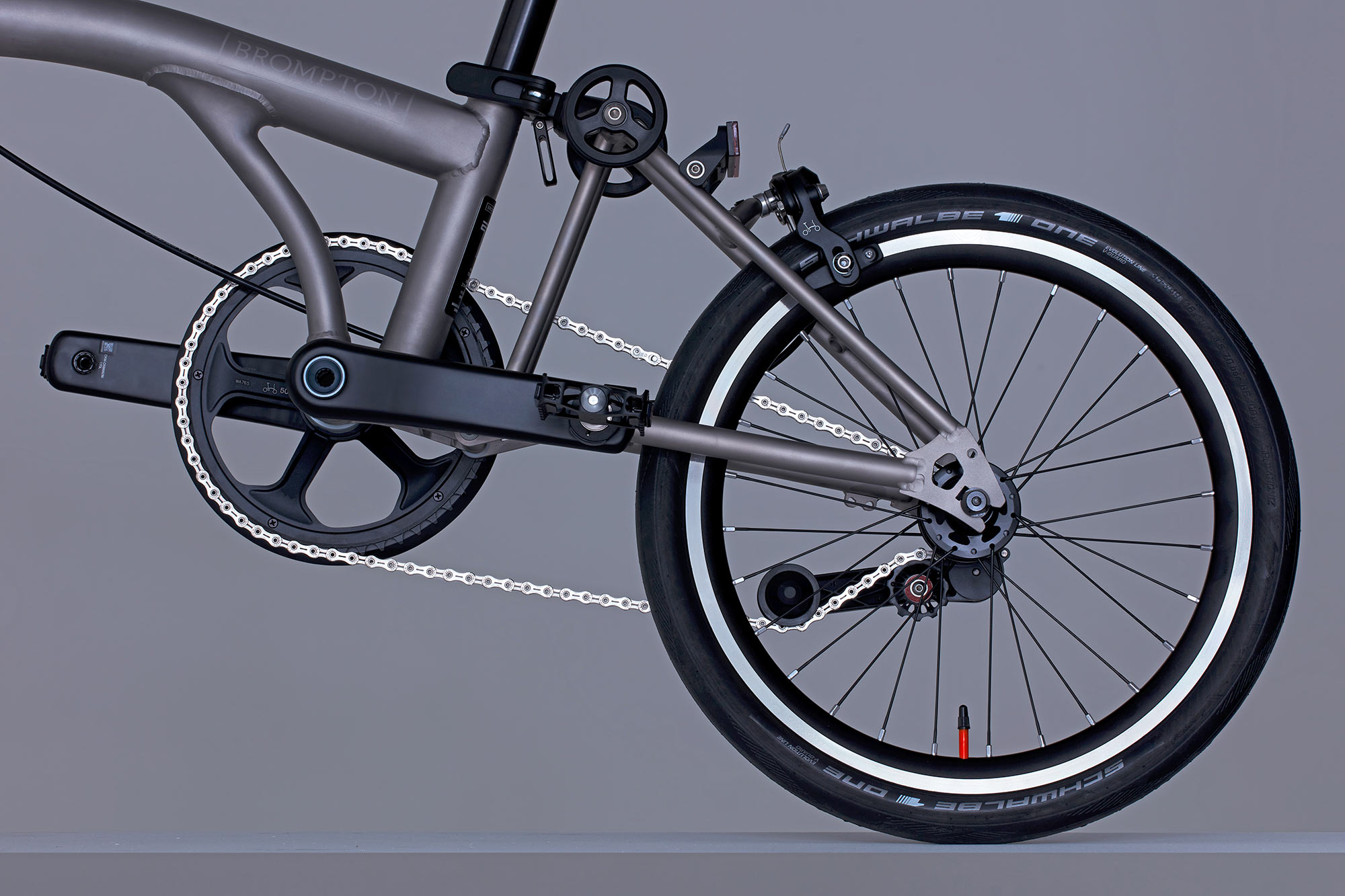 Brompton says the T Line is the “first bike in the world with a steel-armoured carbon seat post“. To be fair most bikes don’t need a 530-600mm long post to get proper leg extension, so light & stiff are easy to achieve with carbon. But to handle the daily stresses of long extension, folding, clamping & unclamping, Brompton design engineers developed a carbon post with a 0.3mm thick steel reinforcement layer that makes it bulletproof. 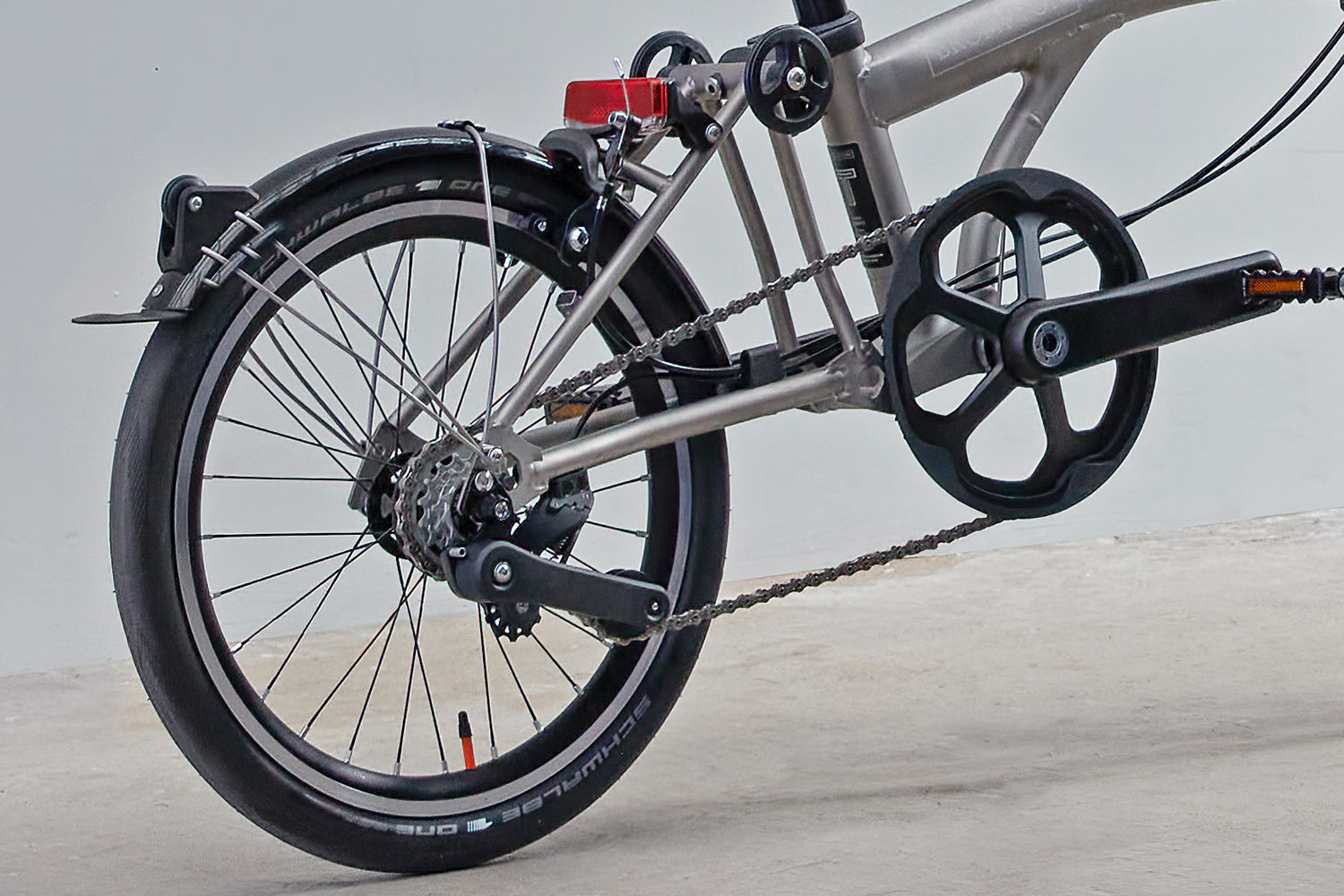 The ti bike gets the same patent-pending compact drivetrain we saw on the recent light mixed ti & steel P Line, with a long-arm 4-speed rear derailleur that weighs just 60g to shift across an 11/13/15/18T mini cassette. 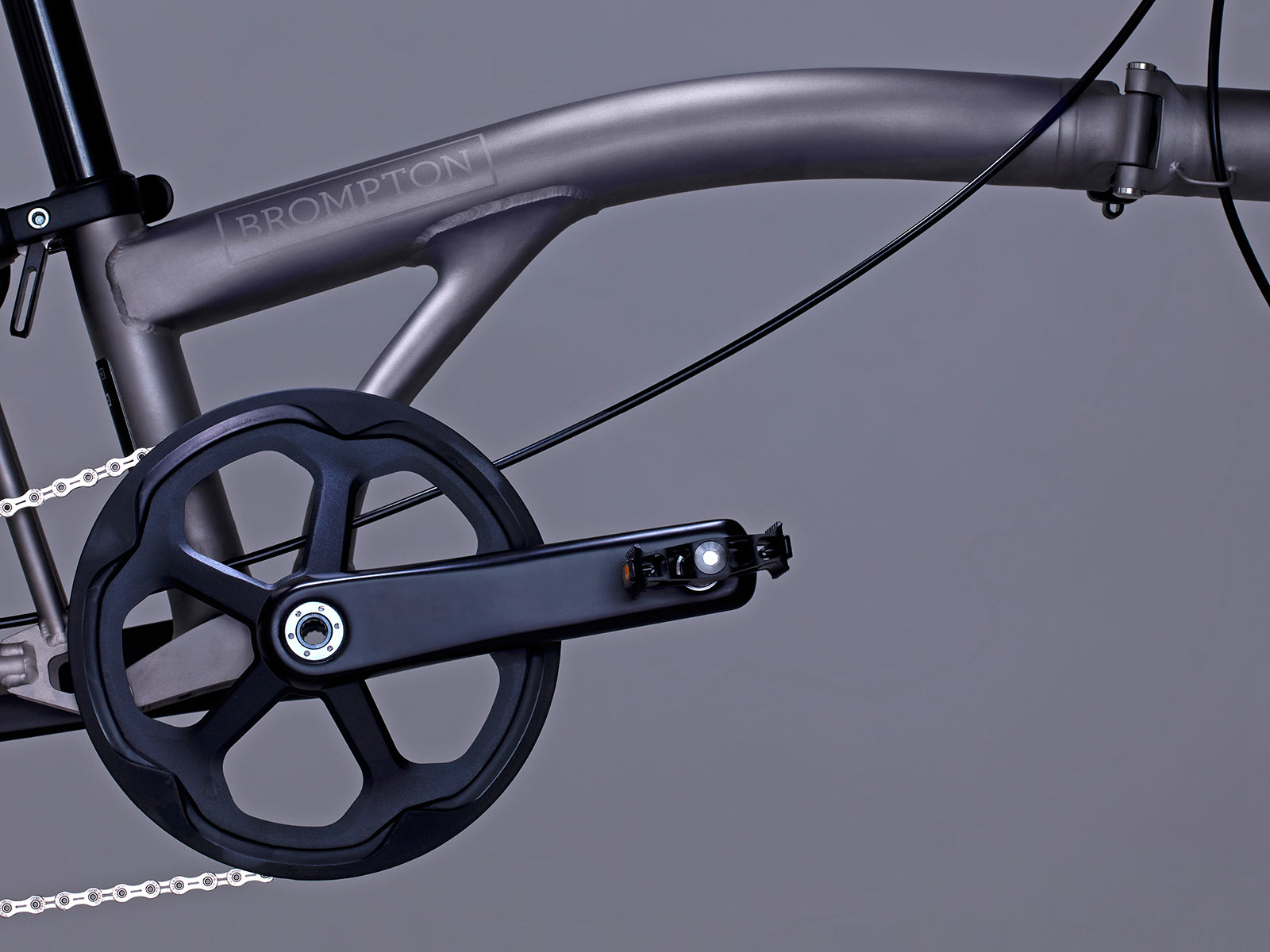 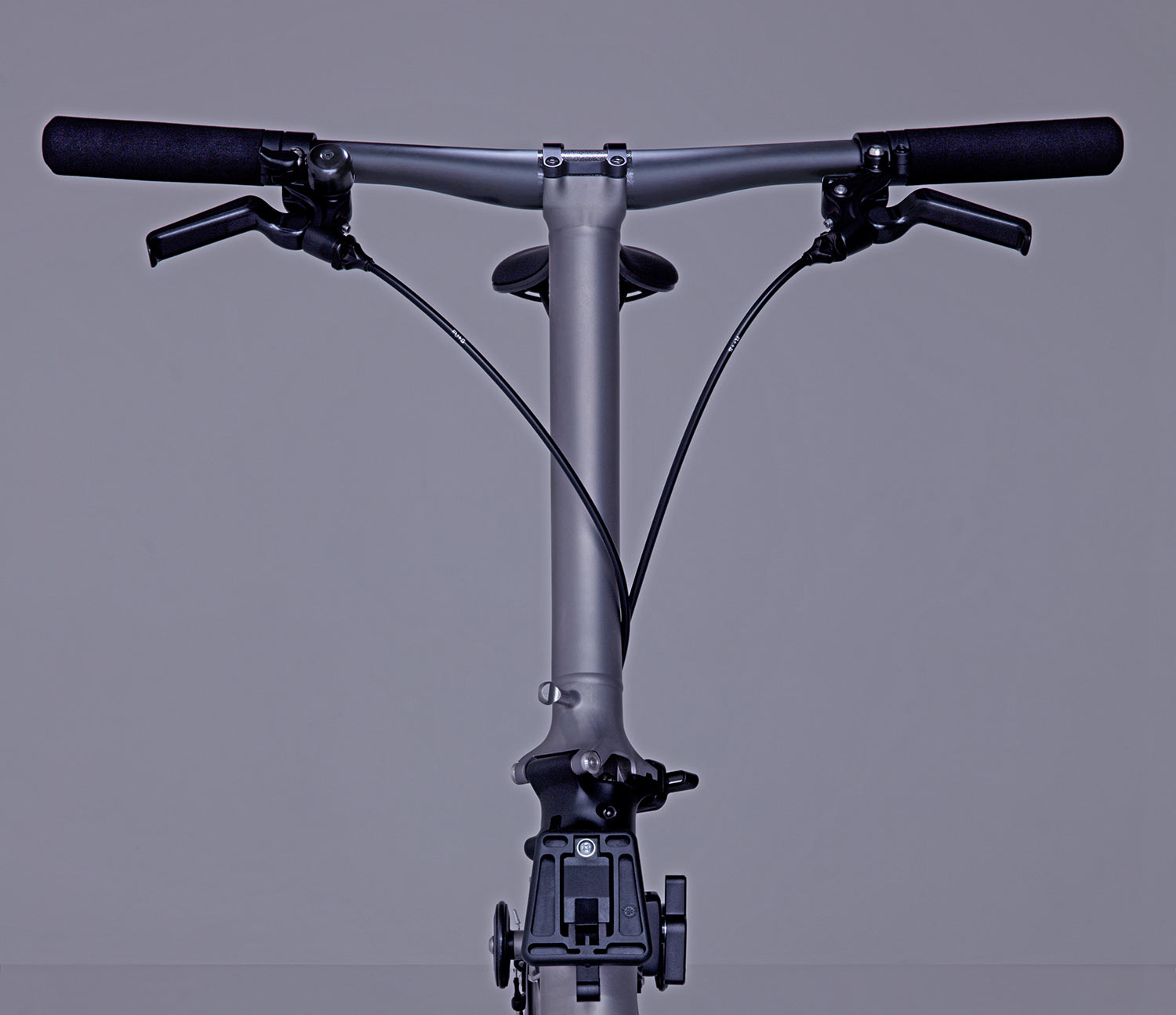 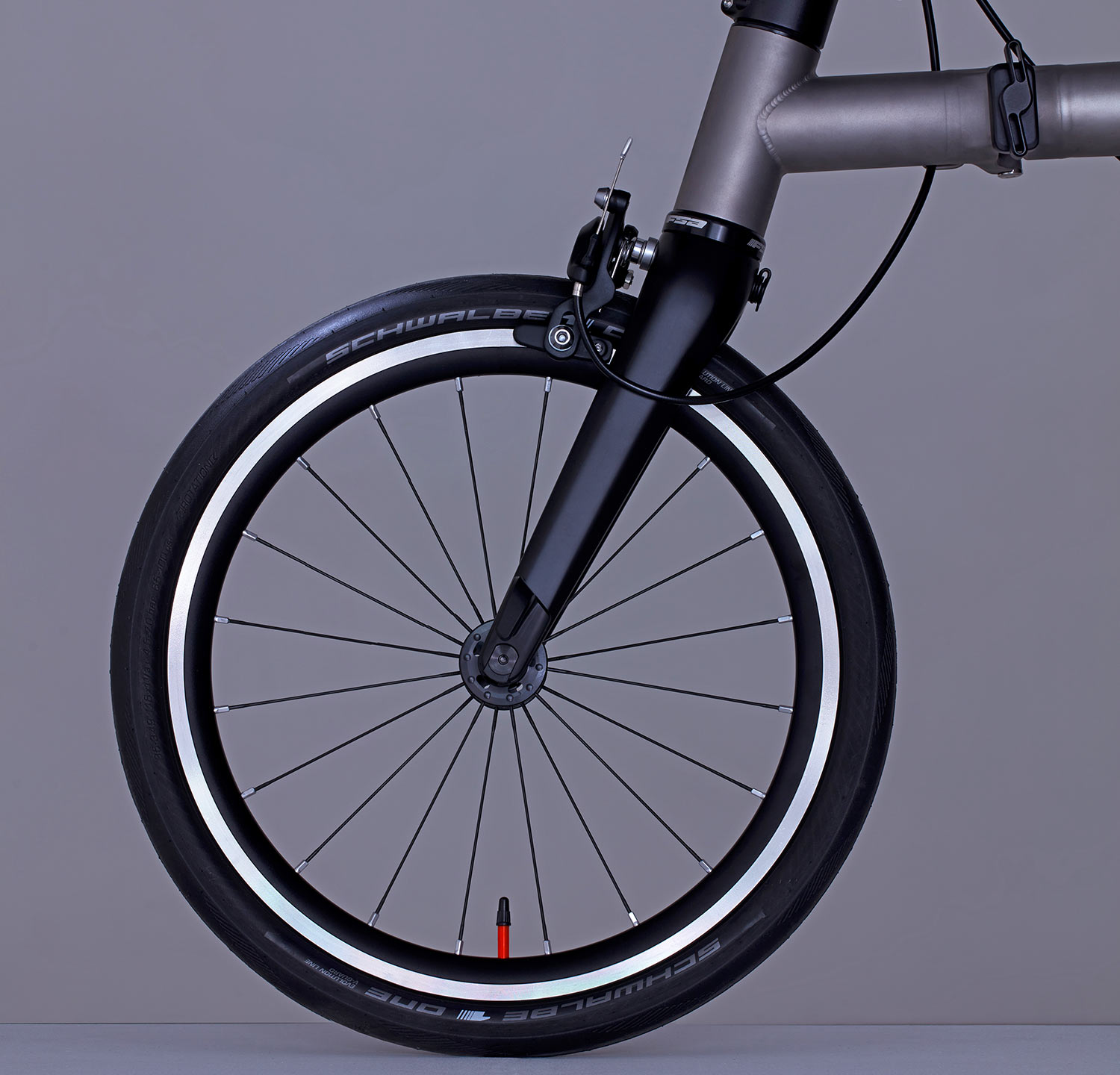 The T Line keeps the same dual-pivot caliper rim brakes to clear the 35mm Schwalbe One road tires (with 34g Tubolito S-turbo tubes inside) –  almost the only tech carried over from the classic Brommie. 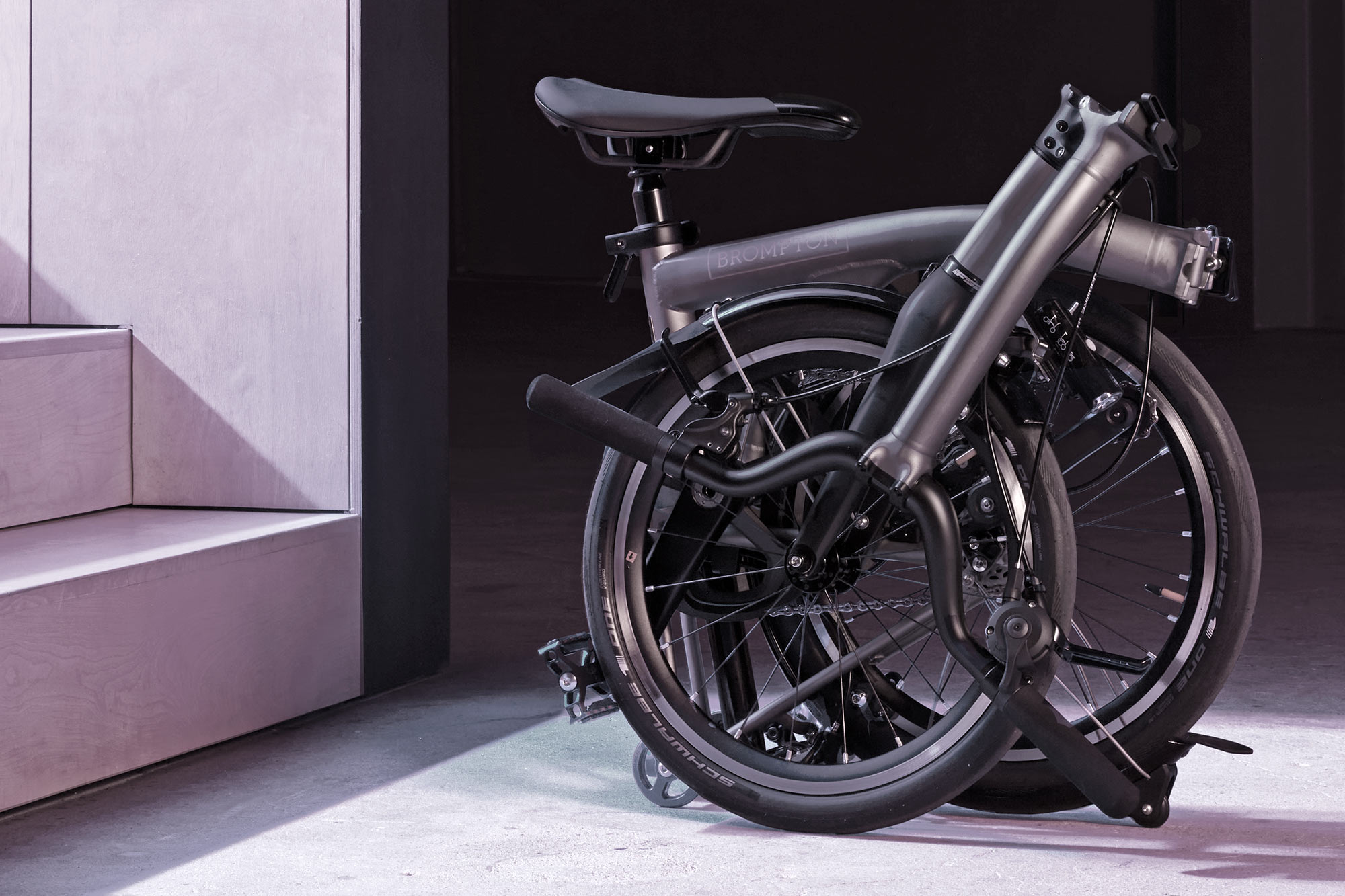 A premium ultralight titanium Brompton doesn’t come cheap, and they won’t be so easy to get ahold of. The new T Line is available in two models (and two bars each), both available exclusively through a ballot system on Brompton.com and through premium Brompton Junction shops only in London, New York, Shanghai, Singapore & Paris. 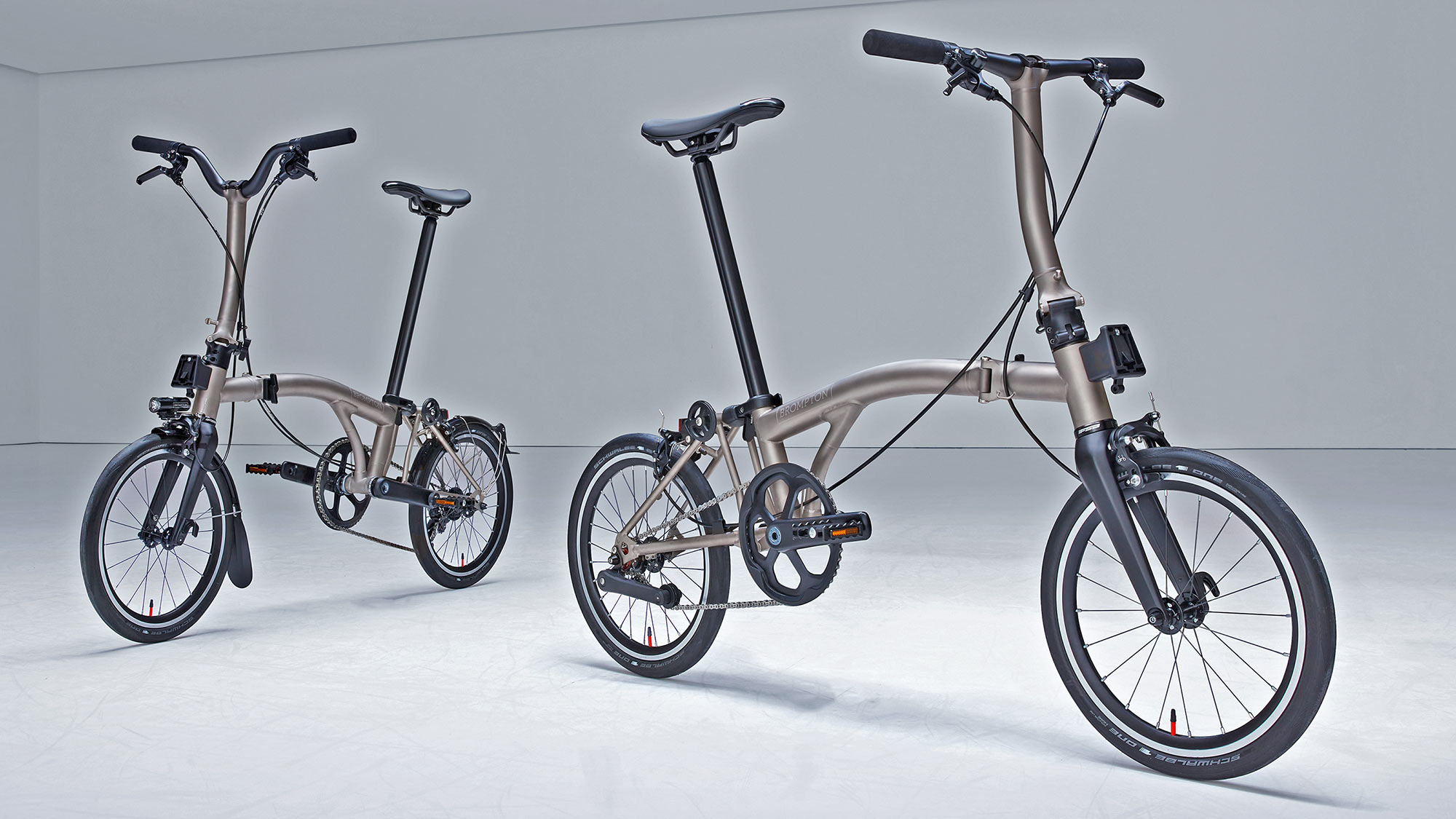 That is one elegant Titanium folding bike! If i was an inner city train commuter that needed something for that “last mile,” i would take a hard look at this Brompton.

I literally LOL’d at the beginning of the video when they said the only thing carried over from the old model was the brakes – the worst feature of Bromptons.

Aside from that, the new frame looks nice, and lighter weight would be good.

Why 4 speeds only??? “Tested all the way from San Francisco to…” yeah right.

Lmao 7.45kg and claims to be the lightest yet… Ffs