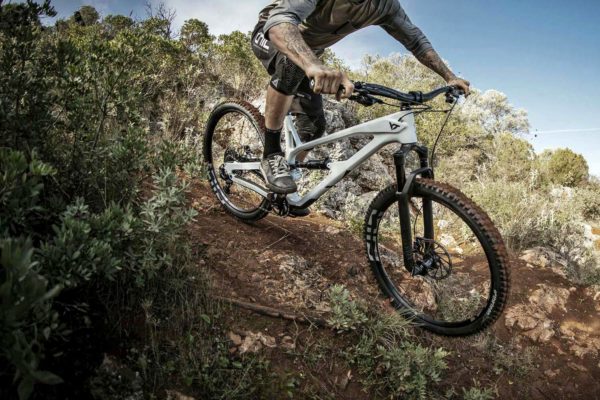 Taking a completely unique approach for their new trail bike debut, YT is touting the emotional bond between rider & bike, before even looking at tech features. So Walken gives a heartfelt monologue of the human connection to the bike, ending with “ride it out, together, just like Jeffsy and I.”

Seriously, Christopher Walken. How is he the spokesman of YT’s totally revamped Jeffsy all-mountain bike?

Well, clearly YT is following up last year’s Capra ‘Return of the Goat‘ with an even wilder approach. ‘Friendship Redefined‘ sees acting legend Christopher Walken shed light on the rare & precious few connections we make in life, how maybe the right bike can help you build those bonds & “scars, that tell the stories, of a lifetime well-lived.”  It’s pretty compelling to watch, before you, even think about the bike. And the bike is no doubt solid as well, even if they did sneak it out after just releasing the updated 2019 Tues DH, Capra enduro & Dirt Love dirtjump bikes… 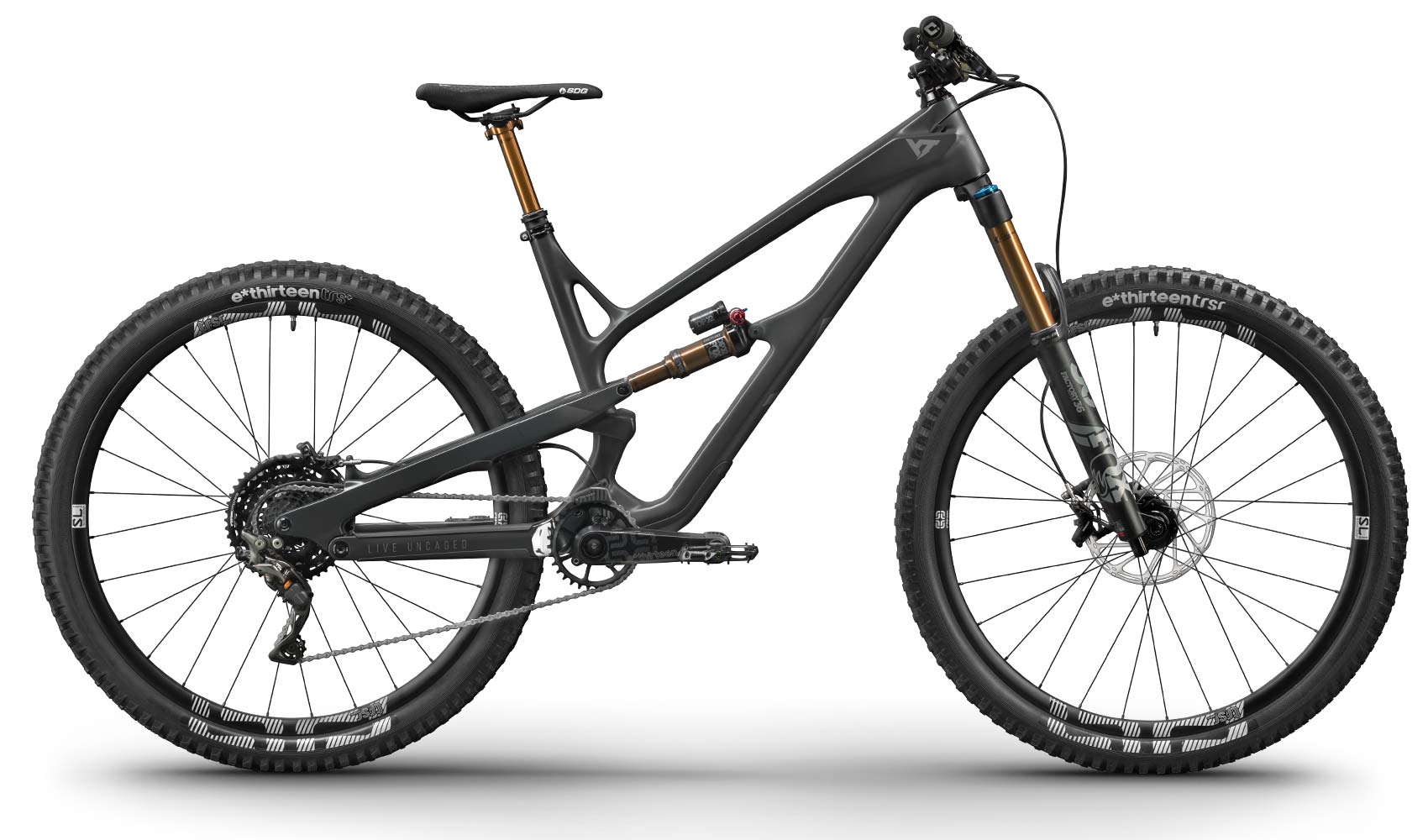 At a glance it’s not so different looking that the outgoing Jeffsy, just a revamped seat cluster and more angular shaping on top of the Horst-link four-bar full suspension bike. That’s probably not a bad thing, as the old bike has been quite popular, since its 29er-only debut.

The second generation bike though launches with both 29″ & 27.5″ wheel builds (in two completely different framesets). The 29er promises fast rolling efficient and the 27.5 bike should lend a more playful feel.

Geometry on the new carbon bike is a lot longer than before (like an extra 30mm), plus 0.5° or 1° slacker up front, with a 3° steeper seat angle for improved climbing. It was already pretty low, so new bike Stack is about 10mm higher for a more comfortable position when descending.

YT has added a new fifth larger frame size for both wheel options (now S-XXL), even while shortening the seattubes, to make it easier for riders to pick alternate sizes to get the exact Stack & Reach they prefer , without worrying about standover. 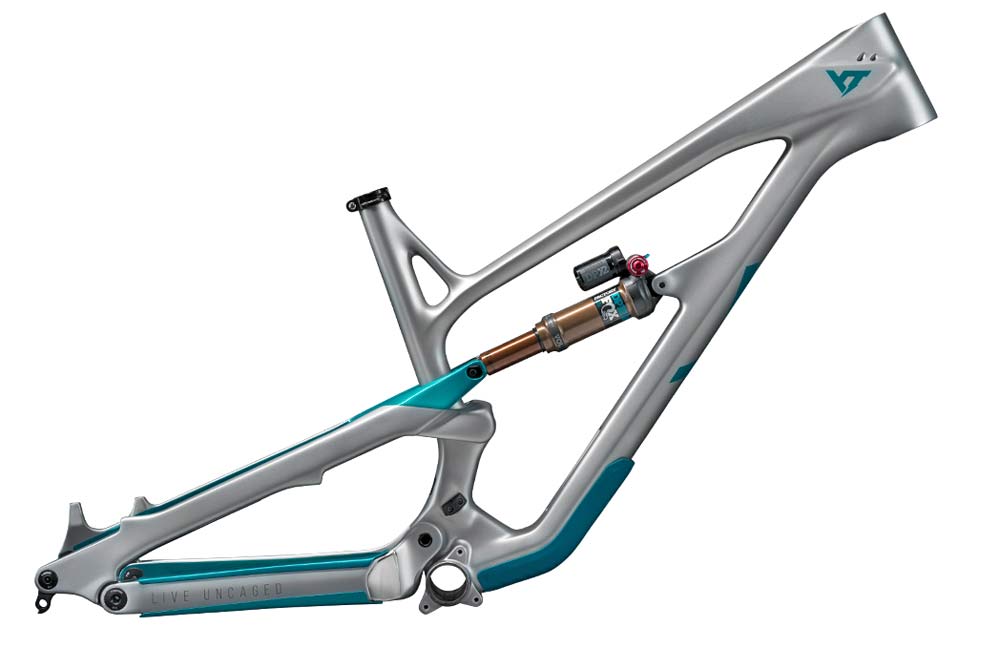 Of course, carrying over the Flip Chip design at the lower shock mount lets riders tailor the geometry 0.5° (and 8mm of BB drop) to dial the bike in for their riding style or terrain.

Interestingly enough there are three different geometries available in the new Jeffsey (six really, two wheelsizes and all). The bikes with a hi-mod carbon front end are all the same, but the top CF Pro Race gets 10mm more travel both in the fork & the rear travel which slackens those bikes out by 0.5°, also hitting a few mm on StacK & Reach.

Then, the all-alloy bikes again are less aggressive, effectively keeping the shorter, steeper geo of the first generation bike, including its smaller four size range (S-XL.) 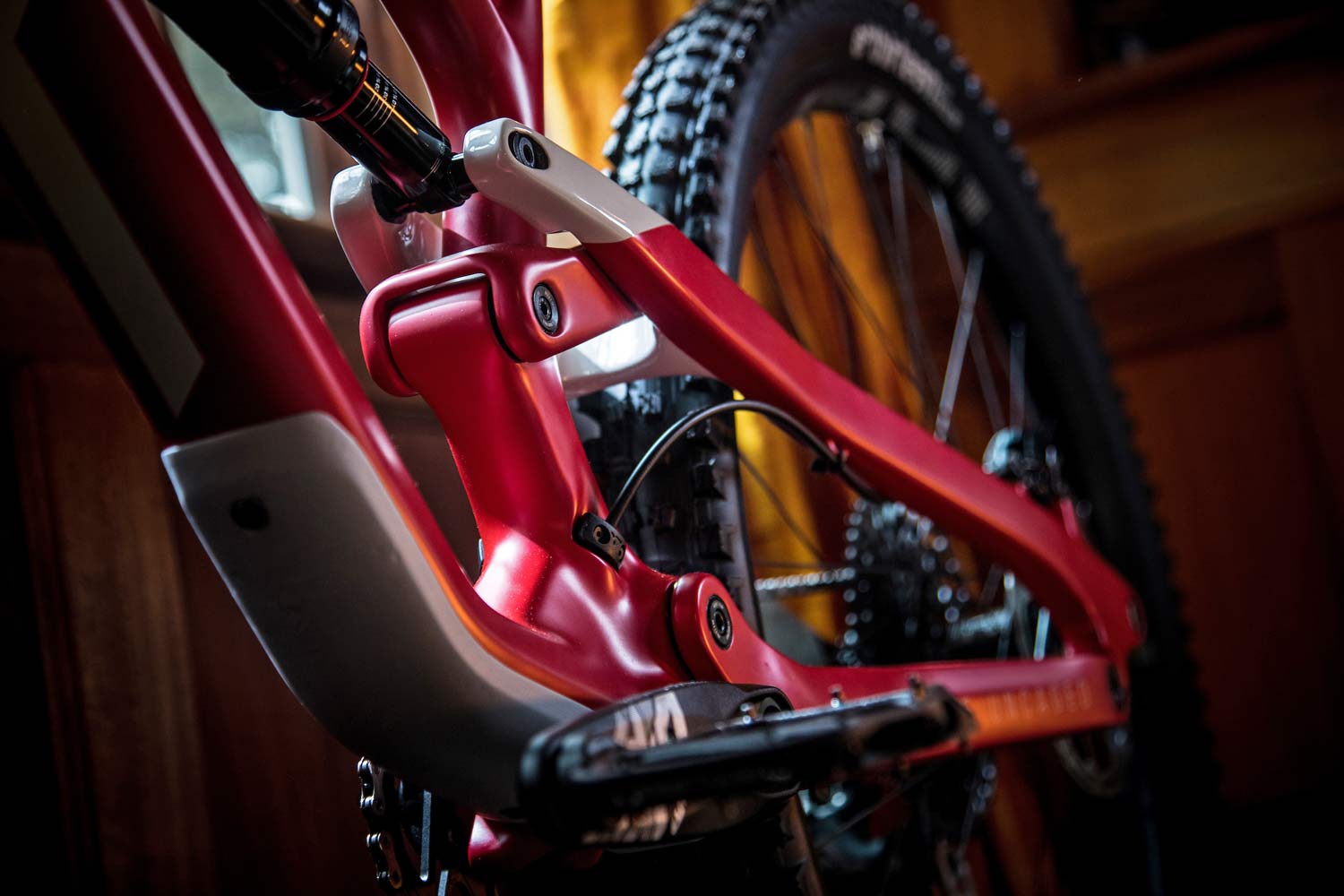 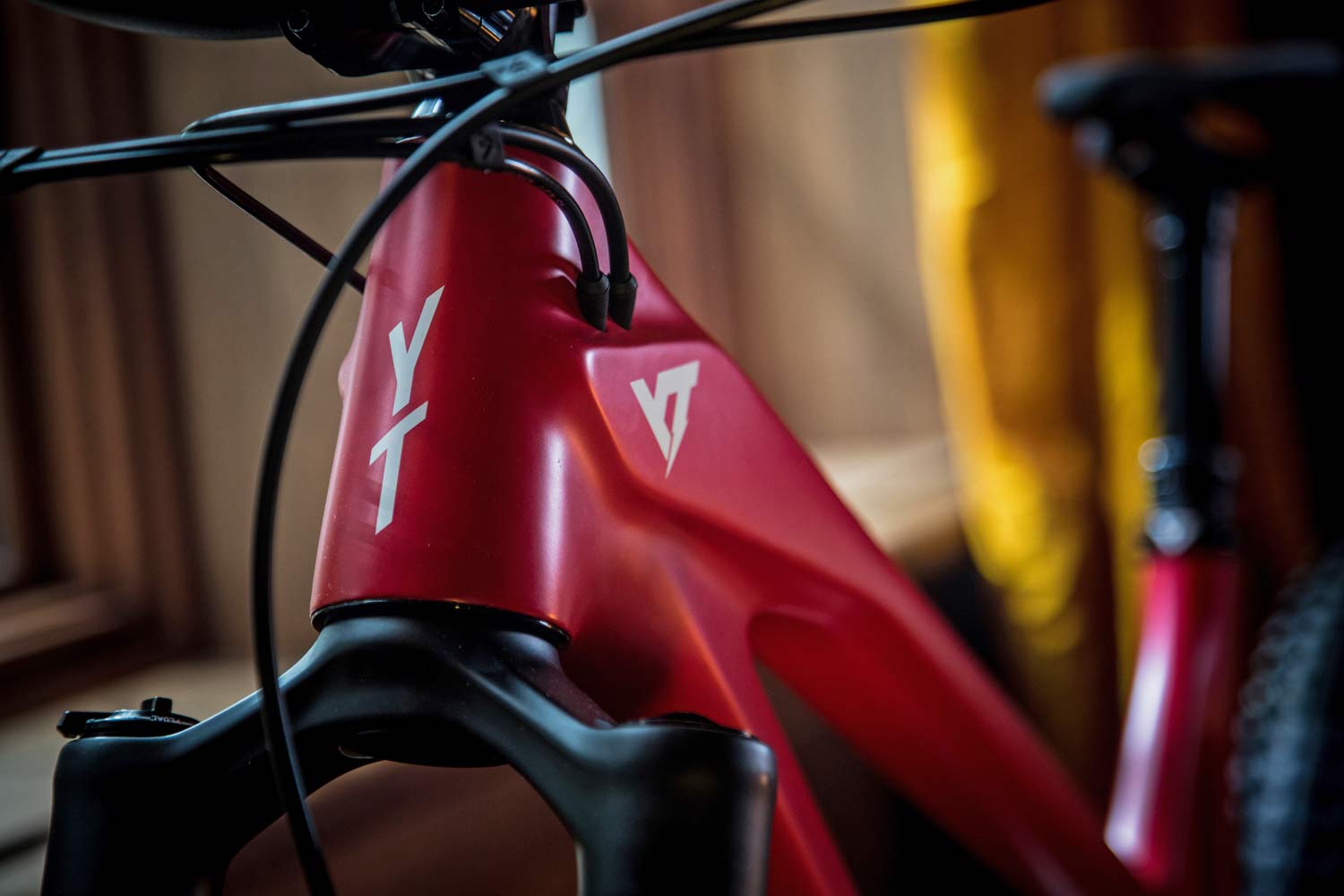 The wildly angular new headtube junction claims extra stiffness, while the frame is supposedly smoother overall with fewer places for mud to build up. 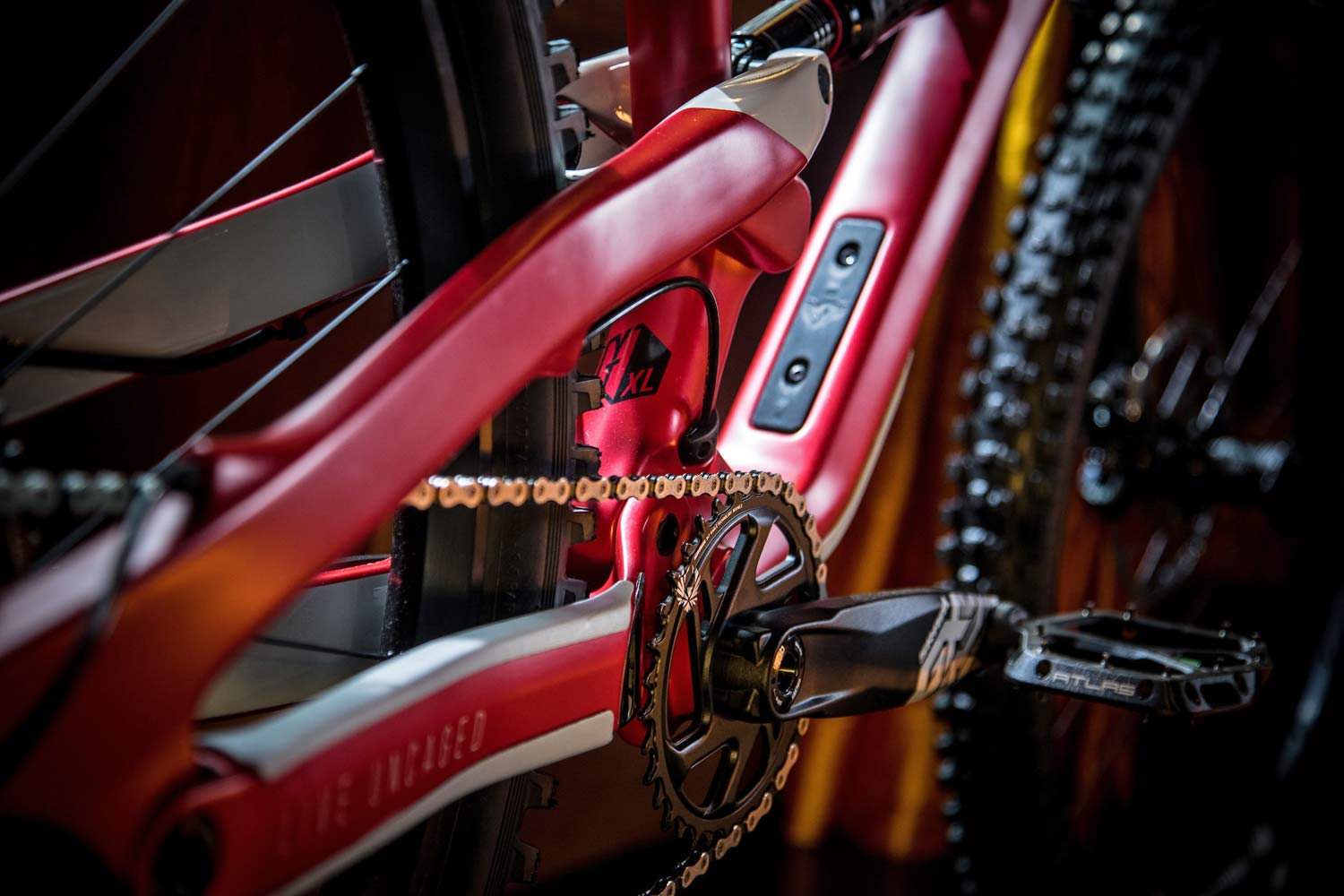 Again the bike has to get its own bottle cage solution to squeeze in some low-profile water. Now it is called the Thirstmaster 4000 (up from 3000), designed with Fidlock to make it easy to get in & out. The carbon frame also features revised internal cable routing with clamping ports to quiet cables & hoses in the frame, plus DT Swiss bolt-on thru-axles. 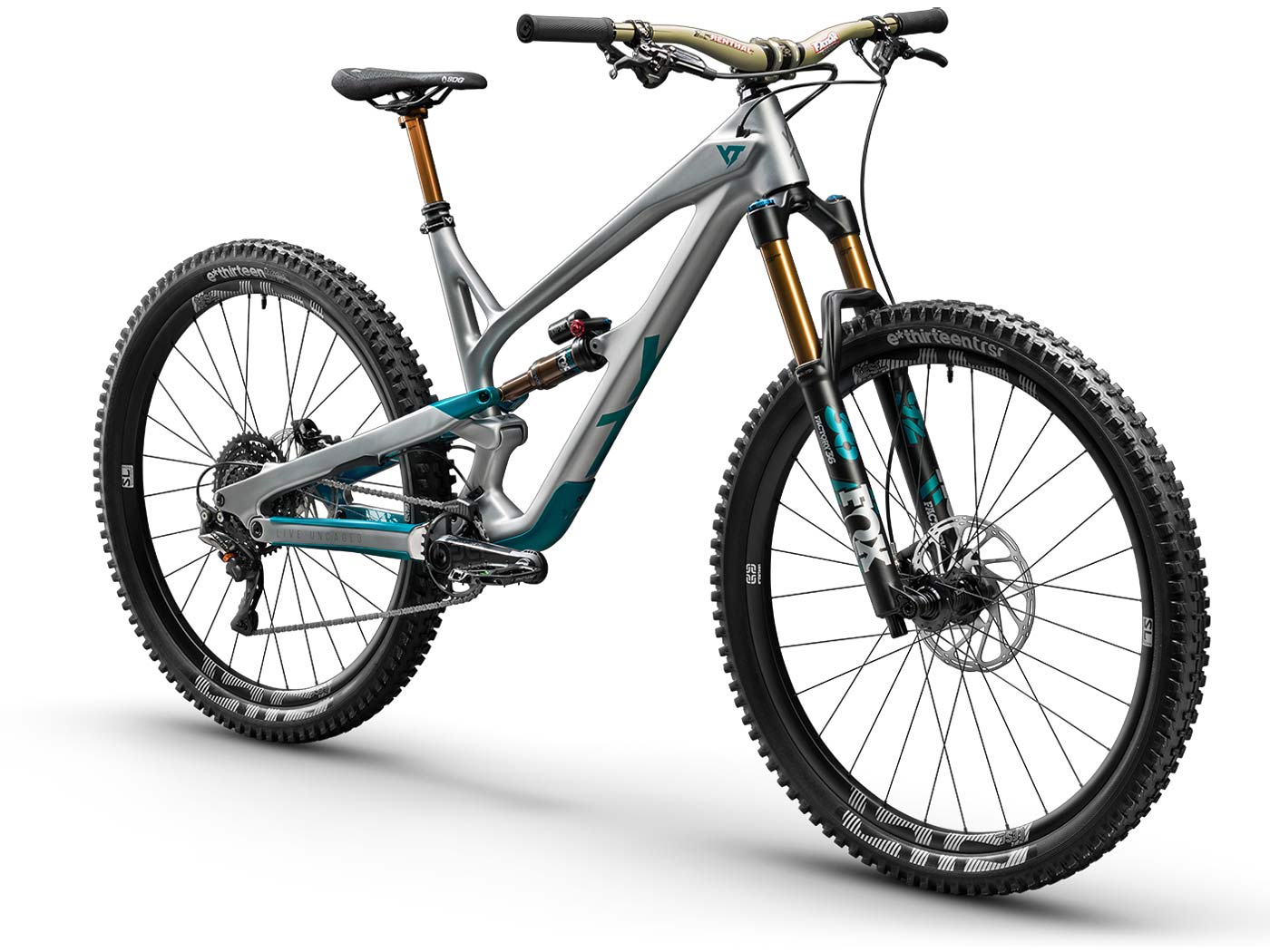 Both 29 & 27.5 bikes are available in the same four complete bike specs, with both carbon & alloy frame options – and like the other new 2019 bikes, two paint options per bike.

The top carbon Jeffsy CF Pro Race sells for $5700 / 5300€ with a no compromises build featuring Fox Float Factory suspension with longer 150mm (29″) & 160mm (27.5″) front & rear travel than the rest of the range. As has become the norm, the top-end Jeffsy uses YT’s signature combination of a Shimano XTR 1×11 drivetrain with the e*thirteen 511% gear spread TRS+ cassette. Guide RSC brakes stop the carbon e13 wheels, plus carbon Renthal cockpit adds up to weights from 12.7kg (28lb) for a small 27.5 bike. 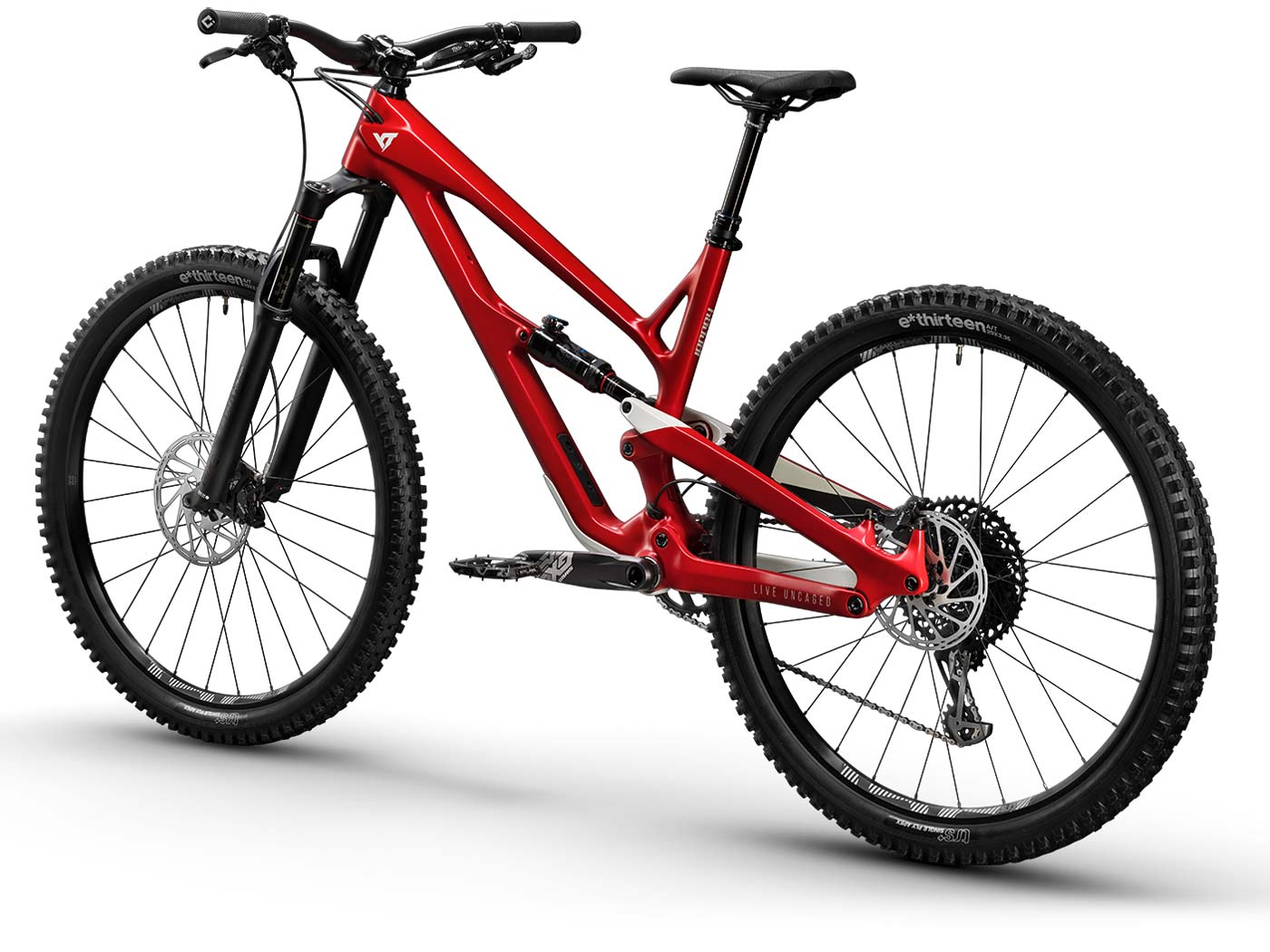 The most affordable carbon version is the $3500 / 3300€ Jeffsy CF Comp, which actually swaps in an alloy rear triangle to cut costs. The CF Comps go back to Fox Float suspension, this time at the Performance Elite level, get XT 1×11 with the wide e13 cassette & base Guide R brakes from 13.3kg (29.3lb).

Then the full aluminum Jeffsy AL Base drops in with a $2300 / 2300€ price tag featuring the three-year old, unchanged geometry of the original Jeffsy. The base is all about keeping costs down so it doesn’t evolve with the carbon bikes, matching front & rear Fox Performance suspension travel, and a SRAM NX Eagle drivetrain from 13.8kg (30.4lb). 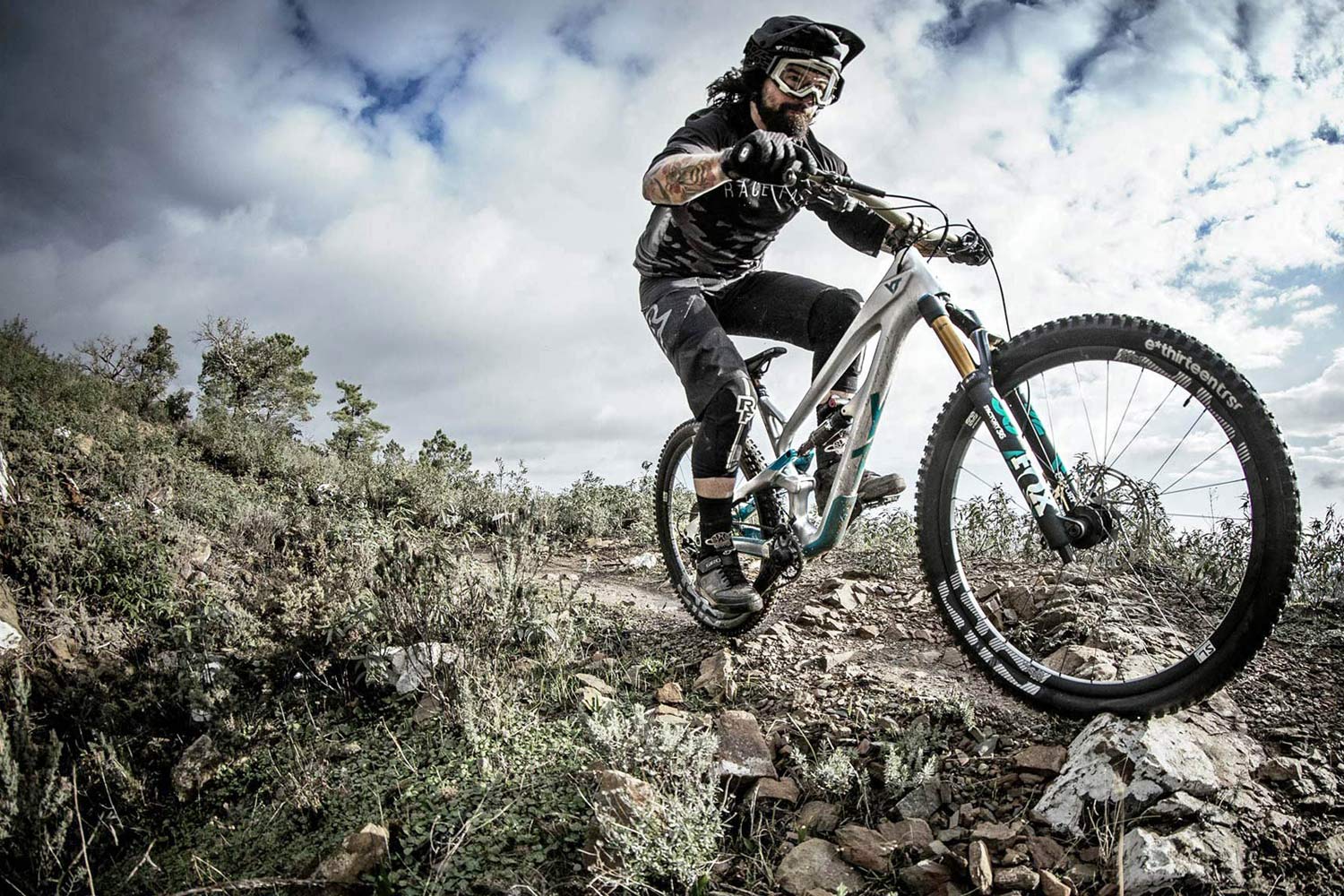 Each of the new 2019 Jeffsies is ready to order now direct from YT. Actual availability varies based on model, color & size, with the first bikes shipping out before the end of January.

While YT’s prices are not unreasonable by modern standards, I for one would prefer they cut their marketing budget and their prices

Looks like a nice solid bike which would do well on my local rides, will be looking out for them

Rumor is that Christopher Walken never turns down a role that’s offered to him. Maybe YT capitalized on that.

No frame only option. Wonder why??

I was hoping to see Christopher Walken shred.

Indeed @Mike. We (I) mixed several extra ‘e’s in there. Sorry about that, but thanks for the heads-up. I guess my brain wanted more vowels.

The video was great until the very last line. Awkward!

All I can think is Captain Koons and the watch he had to carry in his rear for many years.