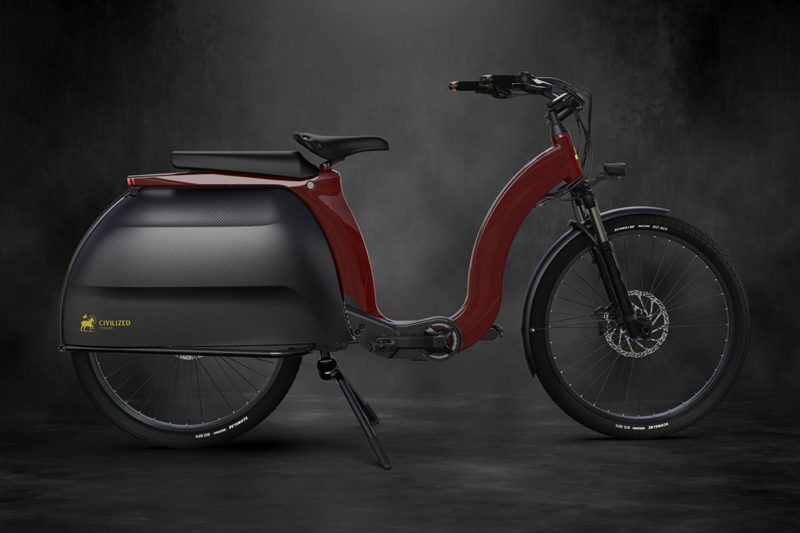 Editor’s Note: We have updated the article to include Civilized Cycles explanation of the self-leveling suspension technology.

Civilized Cycles have released an eBike modeled on the Vespa moped, complete with a 750W mid-drive motor, self-leveling suspension and space for a passenger! The Model 1 gets expanding panniers for up to four fully laden shopping bags on a Step-Thru frame for easy mounting and dismounting. Here’s everything we know about the $6,000 US Civilized Cycles Model 1. 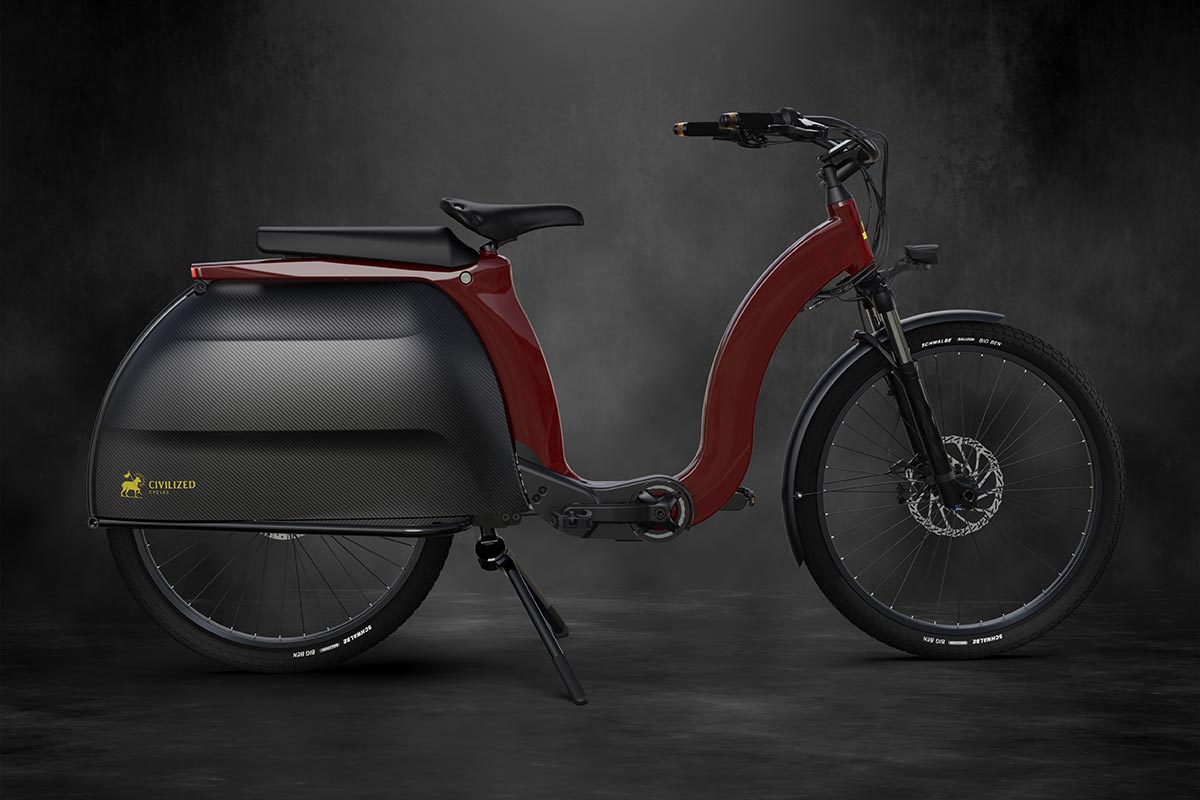 I’ve said it a number of times this year, and I’ll say it again…  This has got to be the most well thought-through comprehensive urban eBikes we’ve seen yet (other bikes I’ve said this about include the Specialized Como SL and the Cannondale Adventure Neo). The technology is progressing at a rate of knots, and the Civilized Cycles Model 1 seems to have it all. 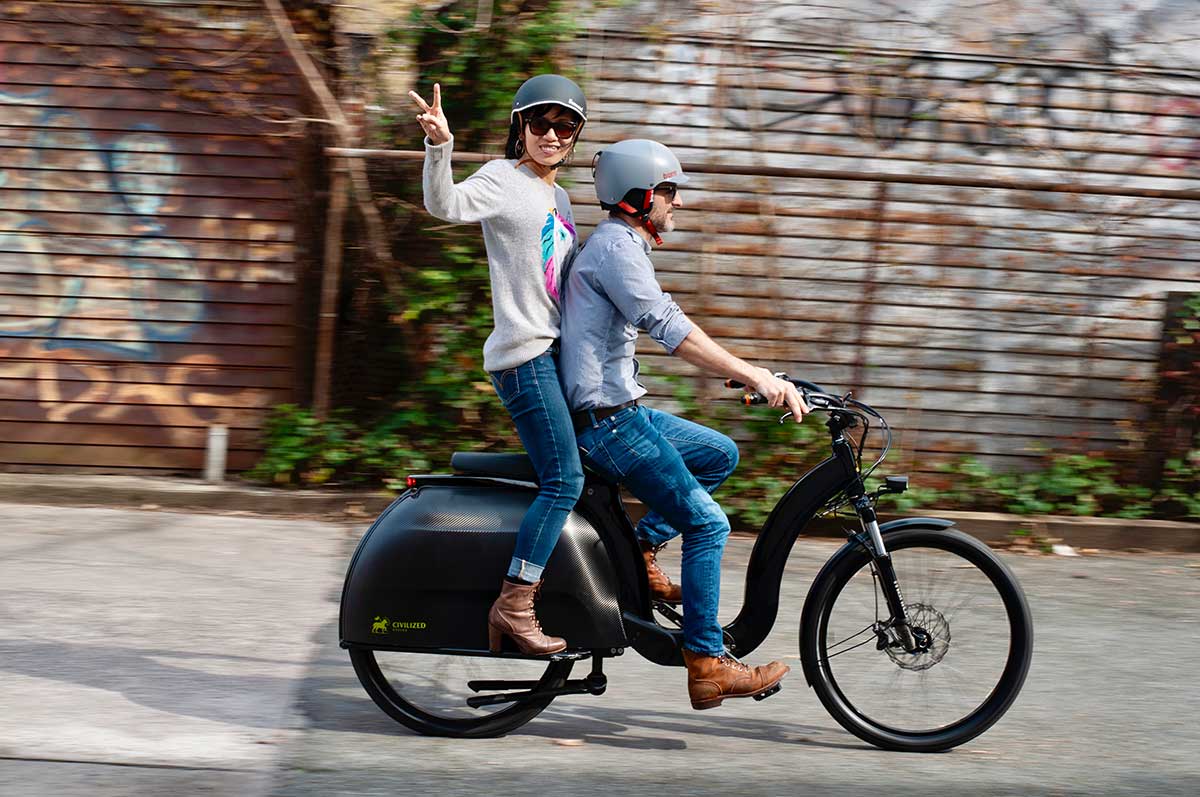 In fact, it immediately makes the aforementioned commuter ebikes look outdated. The Civilized Cycles founder, Zachary Schieffelin, seems to have thought of everything, producing the most practical bike for city dwellers on the market.

Having been a very successful Vespa dealer in the heart of NYC for many years, Zach knew he wanted to model his eBike on the moped. The step-thru frame and ability to carry an adult passenger are both features that were inspired by the Vespa, and of course Zach’s desire to create a functional vehicle that was actually a viable alternative to a car. 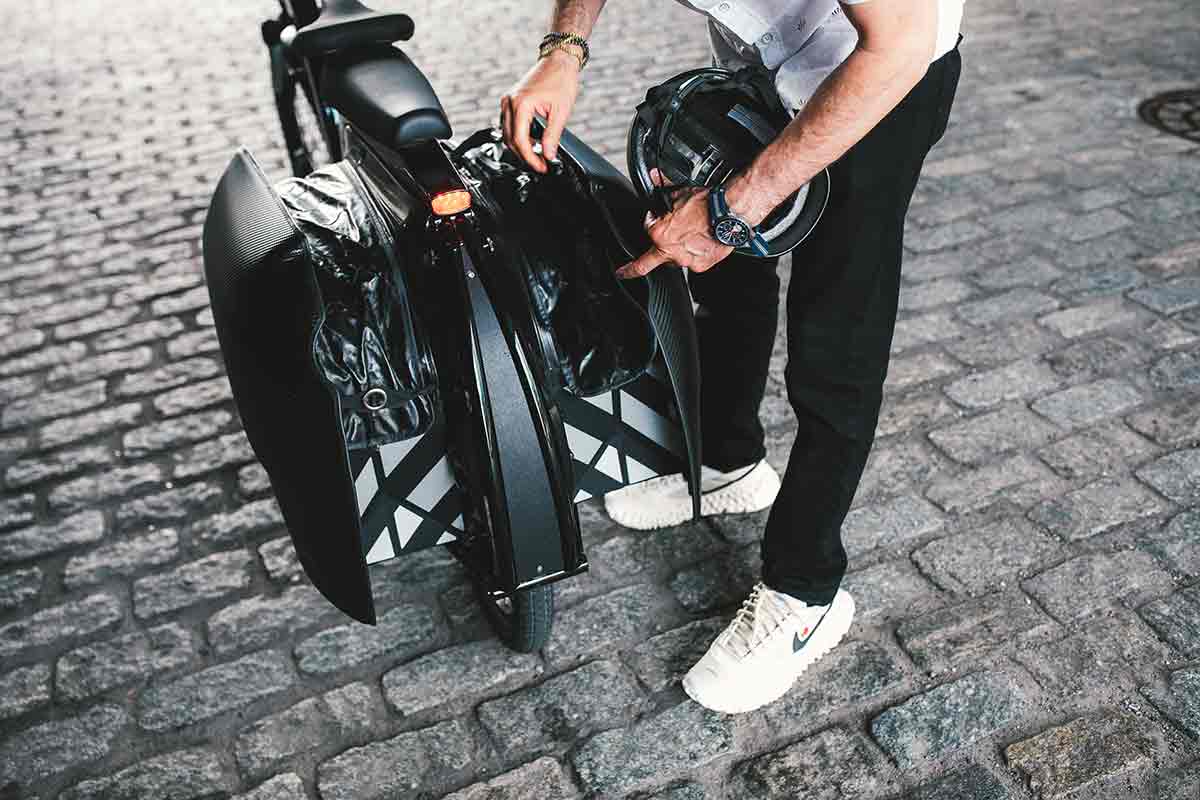 The Model 1 blends the practicality of a cargo bike with the maneuverability of a regular eBike, thanks to its carefully designed expandable pannier bags. Unlike on most commuter bikes, these aren’t simply an add-on; they are a permanently integrated feature of the bike. A design team that normally does work for NASA and Nike helped develop these now-patented hard shell panniers said to be able to carry four fully loaded grocery bags. 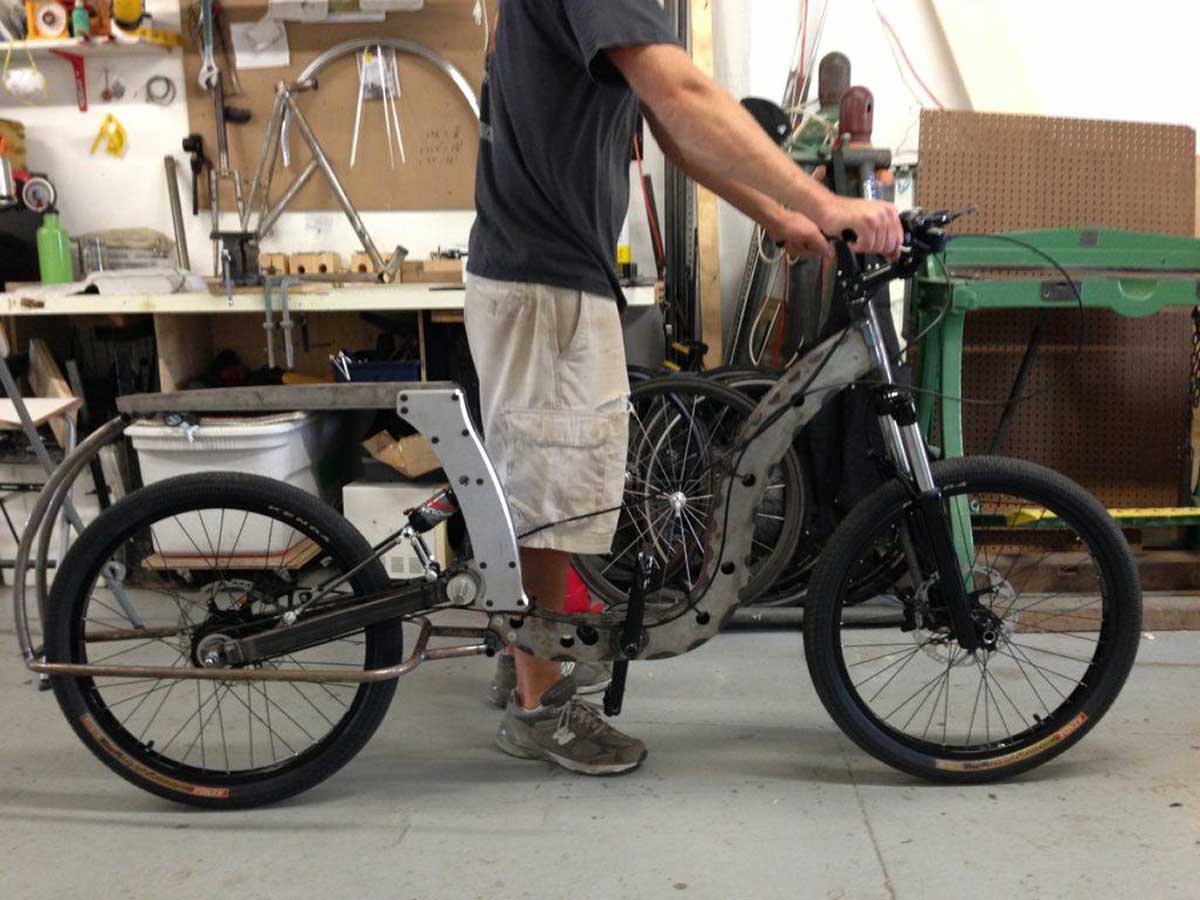 The cleverest piece of technology on the Model 1 would have to be the active suspension system which automatically self-adjusts depending on the rider and cargo weight.  Underneath the glossy veneer of the fiberglass body is a hydroformed aluminium frame; a front end step-thru piece and a rear swing arm. Civilized Cycles’ images of the early prototypes show a single pivot suspension platform whereby the shock is driven directly by the swingarm. 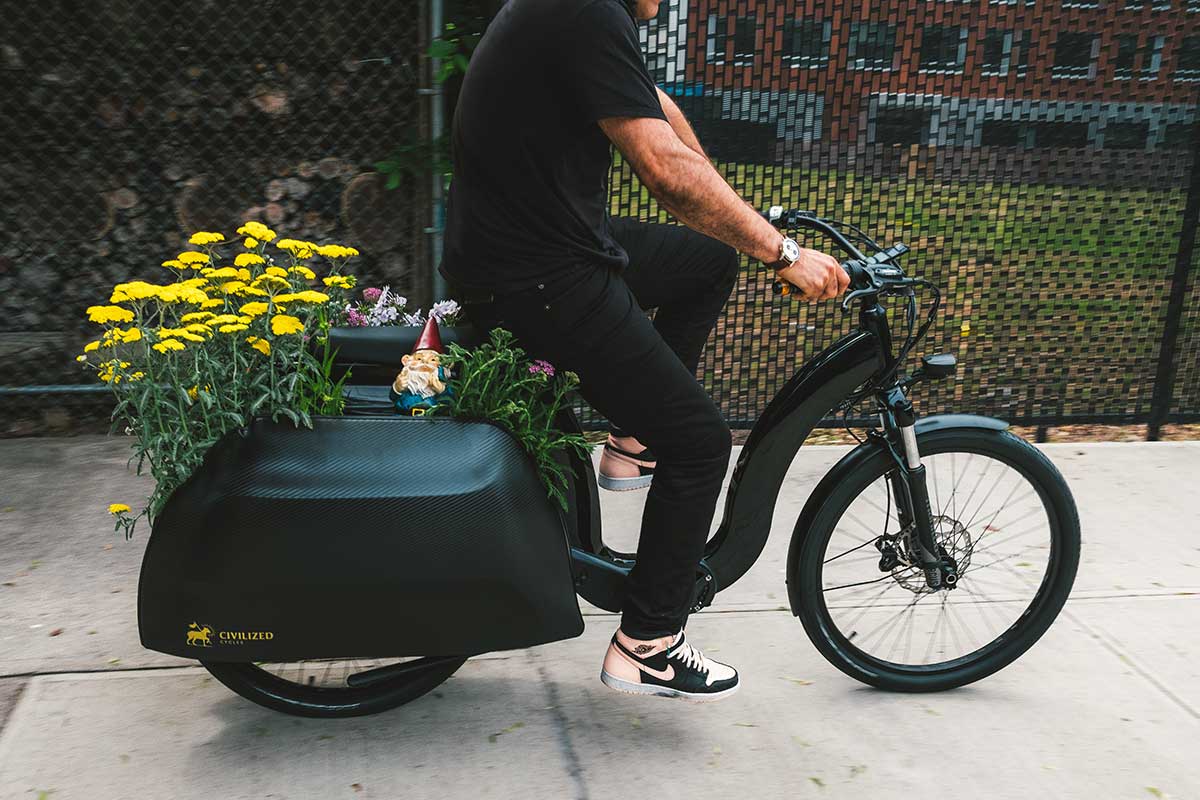 Nothing unusual or technologically advanced there. The interesting thing is that this suspension system self-adjusts, leveling the bike according to the weight it is carrying by adjusting the amount of sag (how deep the bike sits in its travel).

How? Civilized Cycles say that the “patented system works by using an onboard compressor, air spring, and some clever sensing and control logic to match the weight on the bike. Any time the weight varies significantly, (like a passenger gets on or off, a simple push of a button will reset the suspension to its optimal function“. 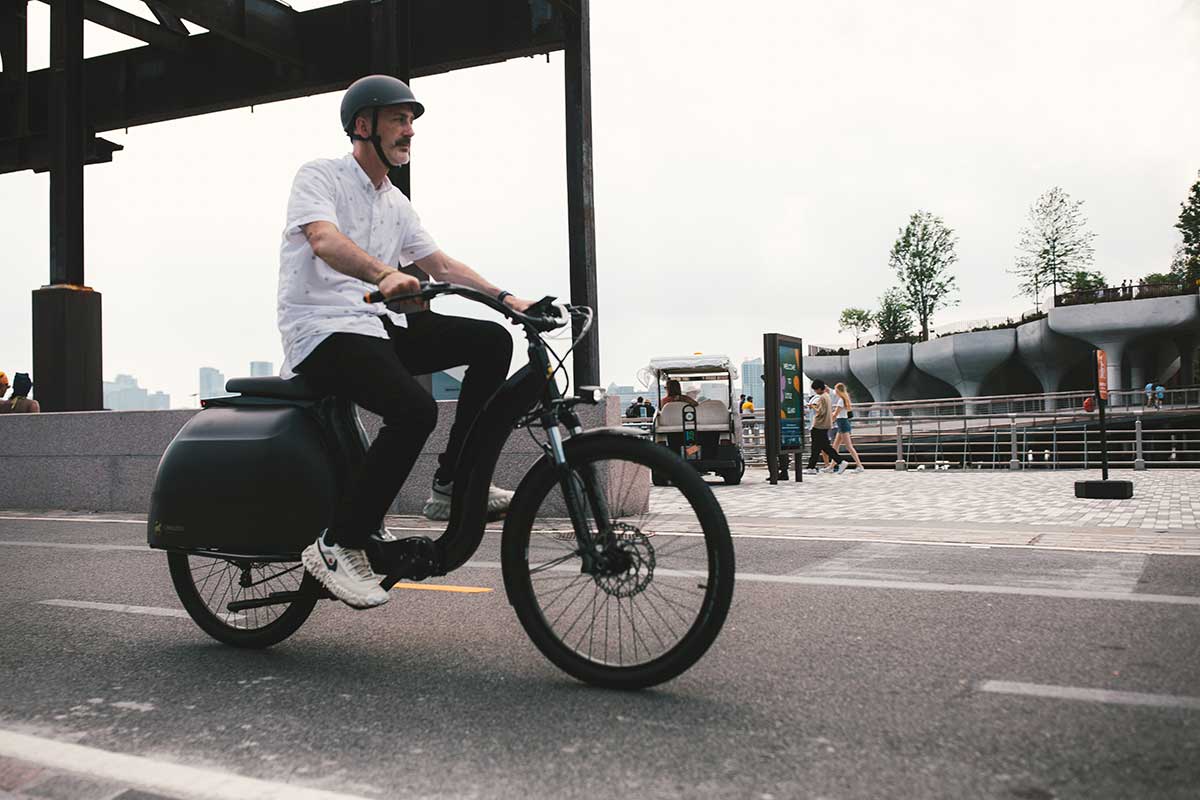 This means that you can let your much heavier friend borrow the bike, or fill up the expanding panniers with the weekly grocery shop, without having to adjust the suspension to the bike’s new system weight. Civilized Cycles call it their “glide ride” technology, with that suspension designed to soak up any imperfections in the road for a comfortable ride. 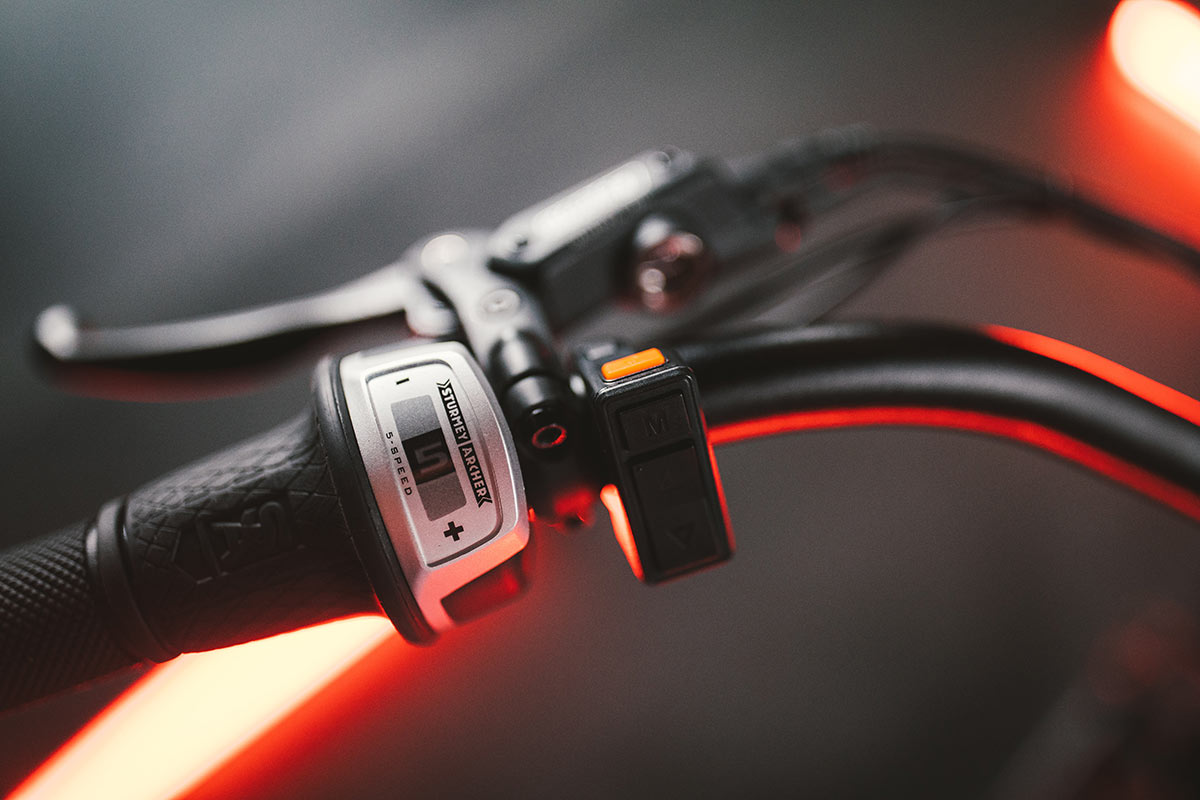 The Civilized Cycles Model 1 eBike runs on a 750W mid-drive motor, with a Sturmey Archer 5-Speed Transmission. It can be driven either via pedal-assist, or via the throttle. The changeable battery pack can also be used as a Powerbank for charging devices such as your phone on the go.

That’s a heap of technology, right? And, there’s more. 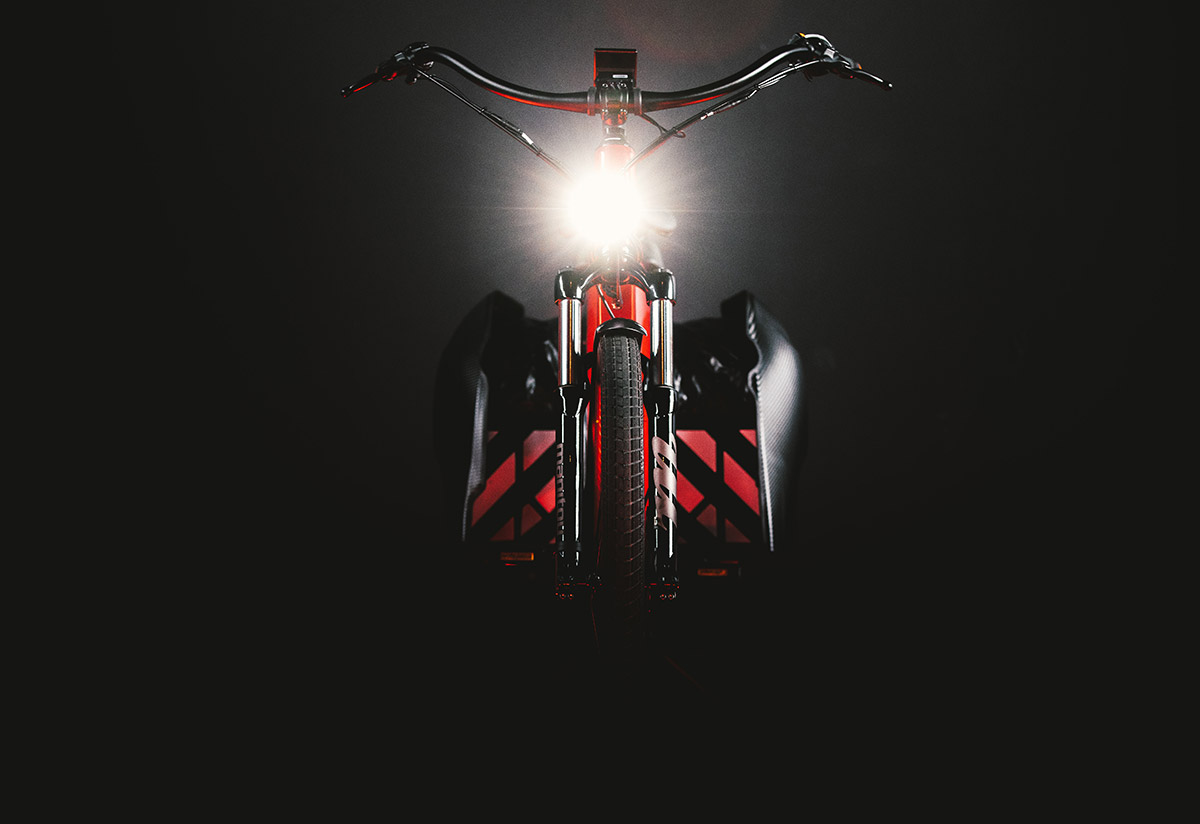 The Civilized Cycles Model 1 features integrated lights. The head lamp is courteous to other road users in that it automatically dips its high beam when it detects and oncoming vehicle’s head lights. In addition to the usual rear light, there’s a also a rear brake light alerting anyone behind you that you’re slowing down. 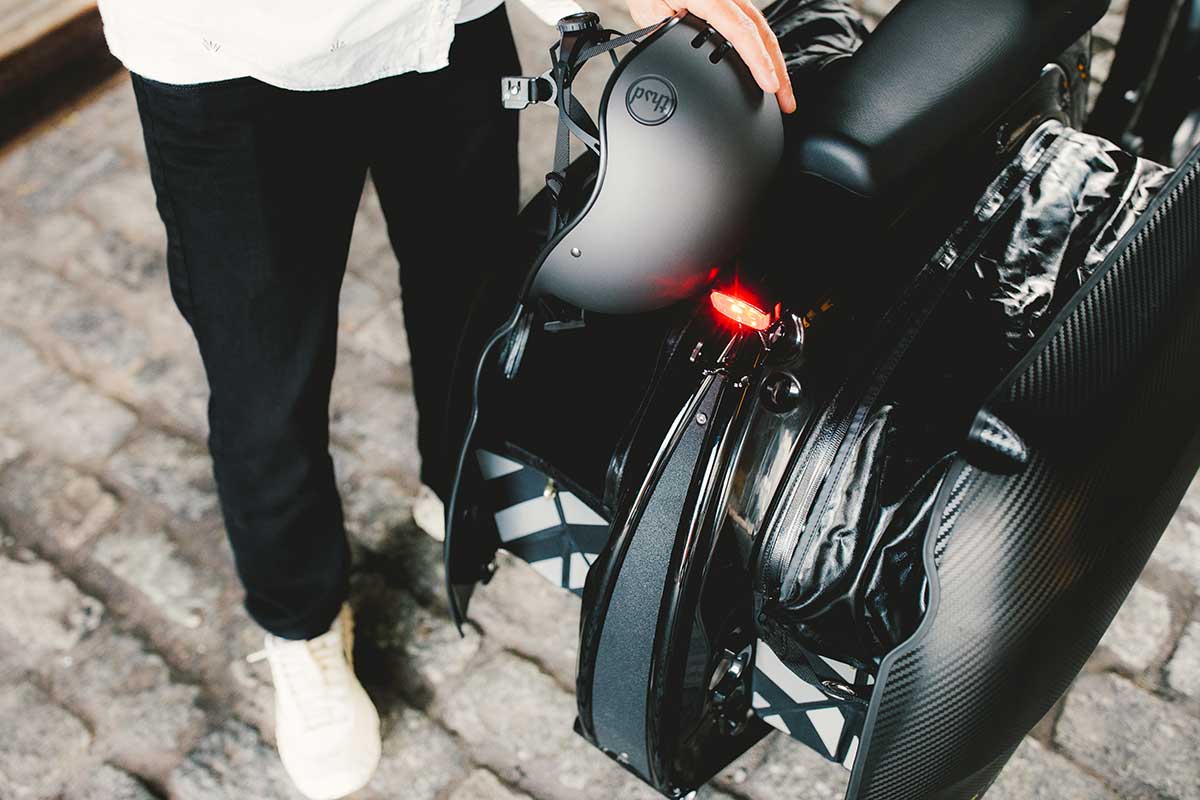 Security is taken into account, too. It can be locked by PIN via its onboard display or remote app and it features GPS theft tracking.

As far as we can tell, the bike will be available in one size only. The handlebar features a dramatic backsweep, bringing the cockpit close to the rider for ease of control. We don’t have a geometry chart for the bike yet, but the marketers tell us the seat can be set low enough for most riders to plant their feet on the ground firmly to allow a passenger to mount the bike. 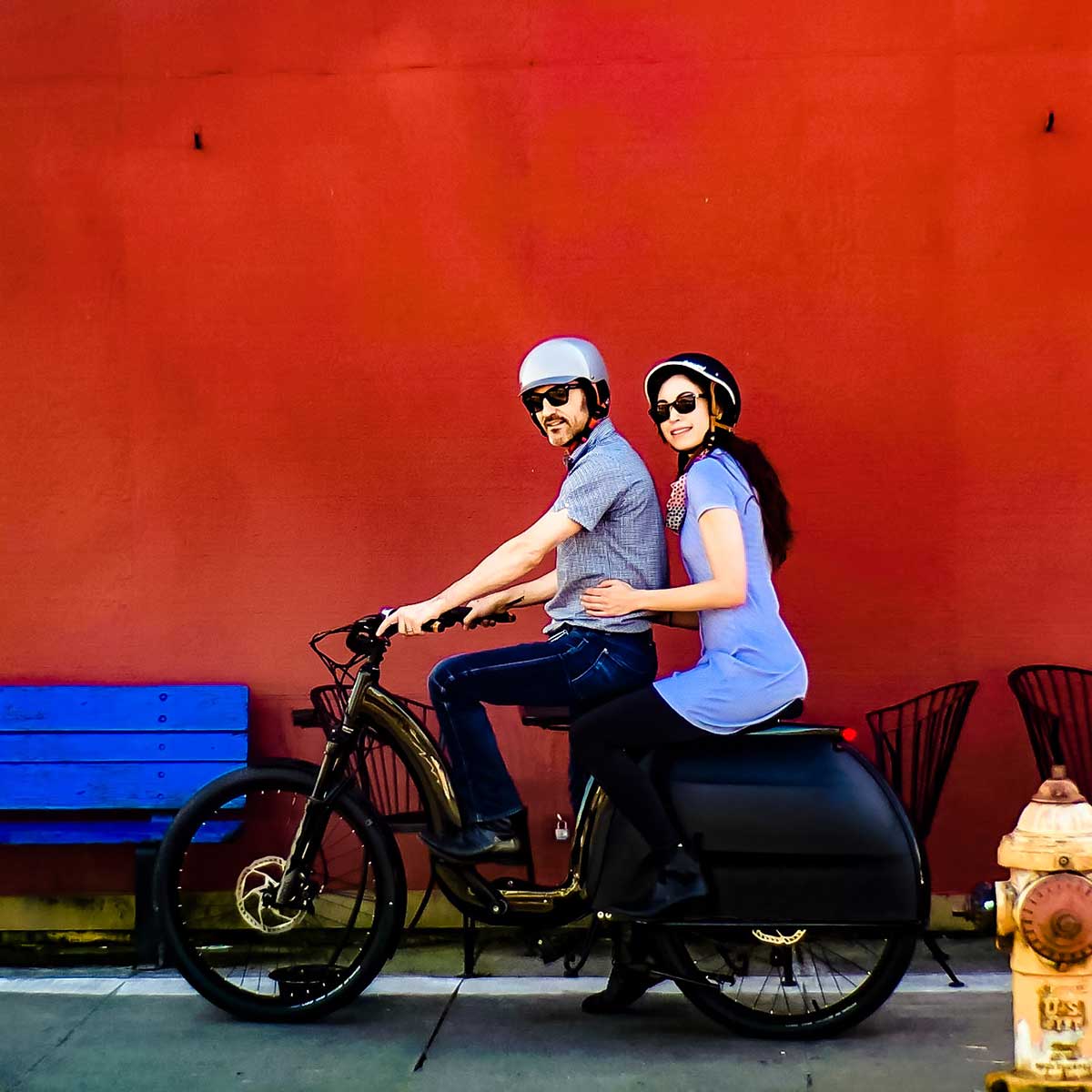 Wanting to make the Model 1 as Civilized as possible, the designers have ensured it will fit in regular bike racks and even in elevators for inner city tower block dwelling riders. 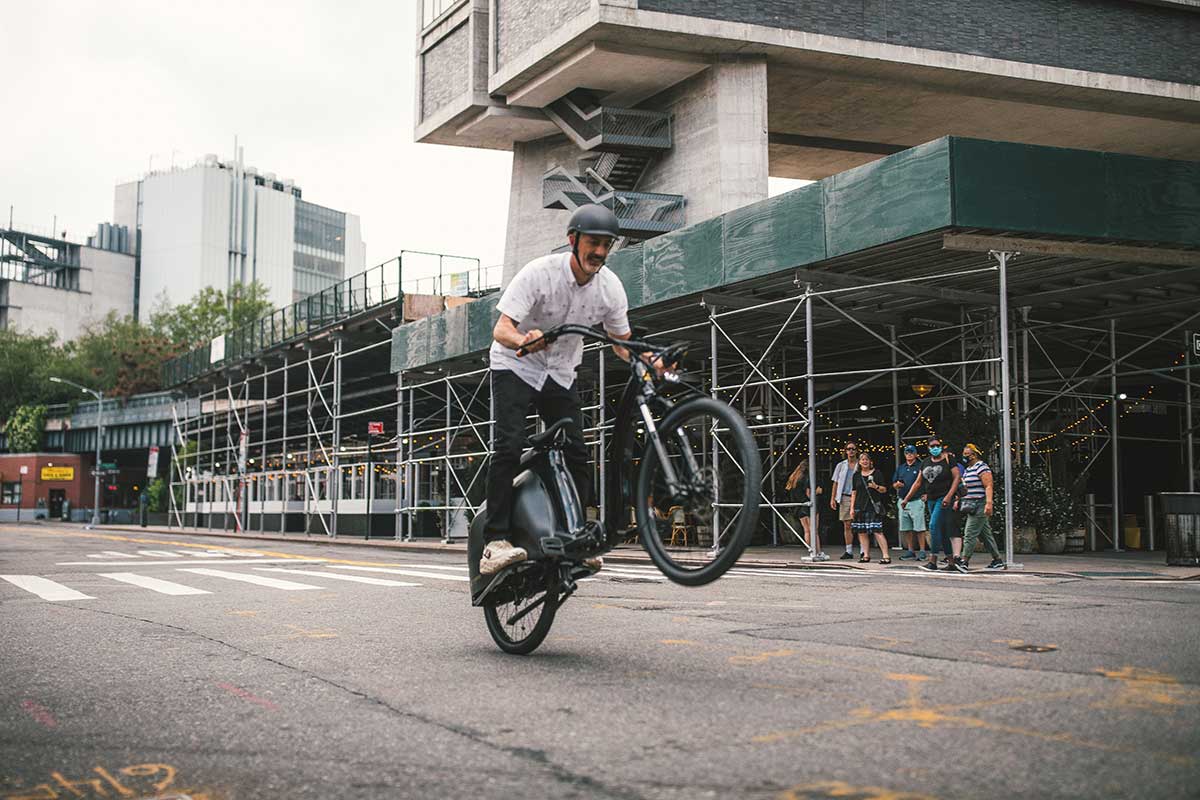 The Civilized Cycles Model 1 retails at $6,000 USD. The first production run, aka the Founders Edition, has flown the nest already. We’re waiting to hear back from Civilized Cycles as to when the next batch will be available for pre-order. Watch this space.

Dude on a Bike

How is this self leveling?

You would still need to adjust the preload in order to address the sag front and rear.

Do the authors here at bother reading and understanding products before they type the marketing fluff from these companies?

Chad
Reply to  Dude on a Bike

Does “Dude on a Bike” even bother reading and understanding products before replying with snarky comments even though they are wrong? This bike has a calibration with an on board compressor where it adjusts the air spring for the rider’s weight.

That’s all well and good if that’s what you’re into…but don’t go bringing that to a bicycle shop for ANY repairs.

Nothing about this bicycle is outside the skillset of a competent bicycle mechanic. Adapt and thrive or whine and fade away. every business has that choice. As a lifelong bicycle mechanic I can see the writing on the wall, and I choose to accept the challenge and look forward to expanding my skills.

Unfortunately, that is not the case for many of the bike shops around the US. Many show preferential treatment to bikes and ebikes they sell, sometimes to the point of refusing to service any unfamiliar brands. Just look at any forum dealing with ebike maintenance and repair: they’re filled with people who’ve either had their bikes turned away or ignored by shops for weeks, are stuck in customer service email hell with swamped online vendors, have their unrideable bikes collecting dust in a garage, or were forced to learn how to fix their bikes themselves via youtube and trial and error.

That isn’t to say some don’t welcome all brands, just that one shouldn’t expect it. Better to check with your local shops before you buy a bike than after.

Front rotor is on backwards in the promo photo. Nice one.

750W with Mid-drive motor?
Crazyness ! Hope users love to change gears, chain and sturmer archer hub once a month… Only rear hub motors works with this amount of power.

Looks like an astounding modern day rendition of the old moped.

I suspect it may use a bit “more” chain than the typical bicycle, given the power?

Love the designs but this is not a bike if it can be throttled everywhere. I love ebikes but pedal assisst is simply the law. stop bolting pedals to fake ebikes. This is the kind of law bending feature that bings ridiculous sized 100 pound behemoth on bike paths with lunatic pilots.

The information on the self leveling was originally left out of this article. Classic BR PR issues. This clears up some things and I’m still interested how it levels the front fork as well. How much weight does this system add?

There are other brands with a similar suspension design in the moto world however, they are bit more complex based on the stated information here.