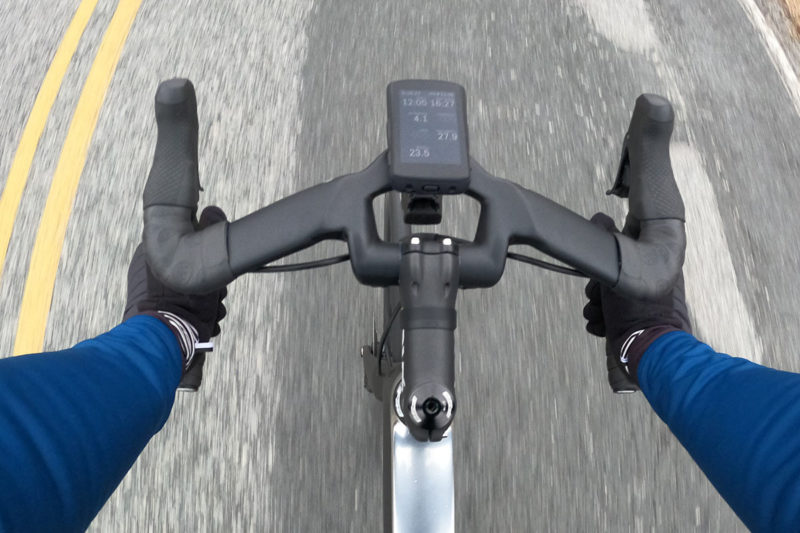 The new Coefficient Wave RR handlebar takes its shaping to extremes to produce a more comfortable bar that puts you in a more ergonomic, aerodynamic position.

Called Swope, the Wave RR (for “Road Race”) handlebar uses a riser shape that then slopes downward to the hoods. That, plus thumb grooves and palm recesses throughout provide a plethora of hand positions that are among the most comfortable I’ve ever found on a handlebar. First up, tech specs and details, then my first impressions…

The RR uses a unique shape all over, but most noticeable from the top is the integrated computer mount bridge. This isn’t just a very fancy, overwrought way to hold your GPS cycling computer, though. It’s there to provide a platform for your thumbs to wrap around while your palm rests on the rise to either side of the stem’s mounting point.

From there, the tops slope down and angle back, giving you an ergonomically correct angle that has the dual benefit of positioning your arms in a narrow, more aerodynamic position.

They say it also puts your shoulders in an optimal position and improves core stability and breathing mechanics. All this because you’re hands and arms are more relaxed by being better aligned. 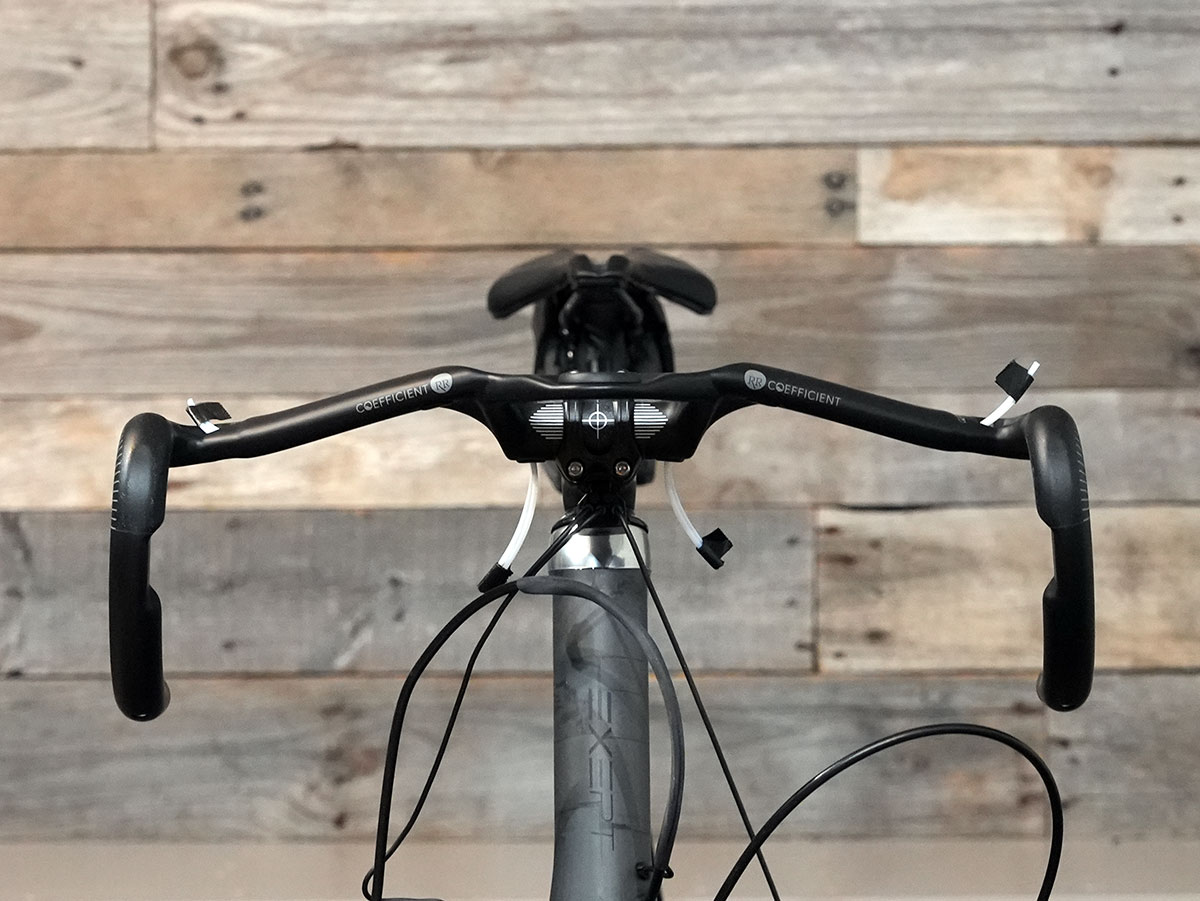 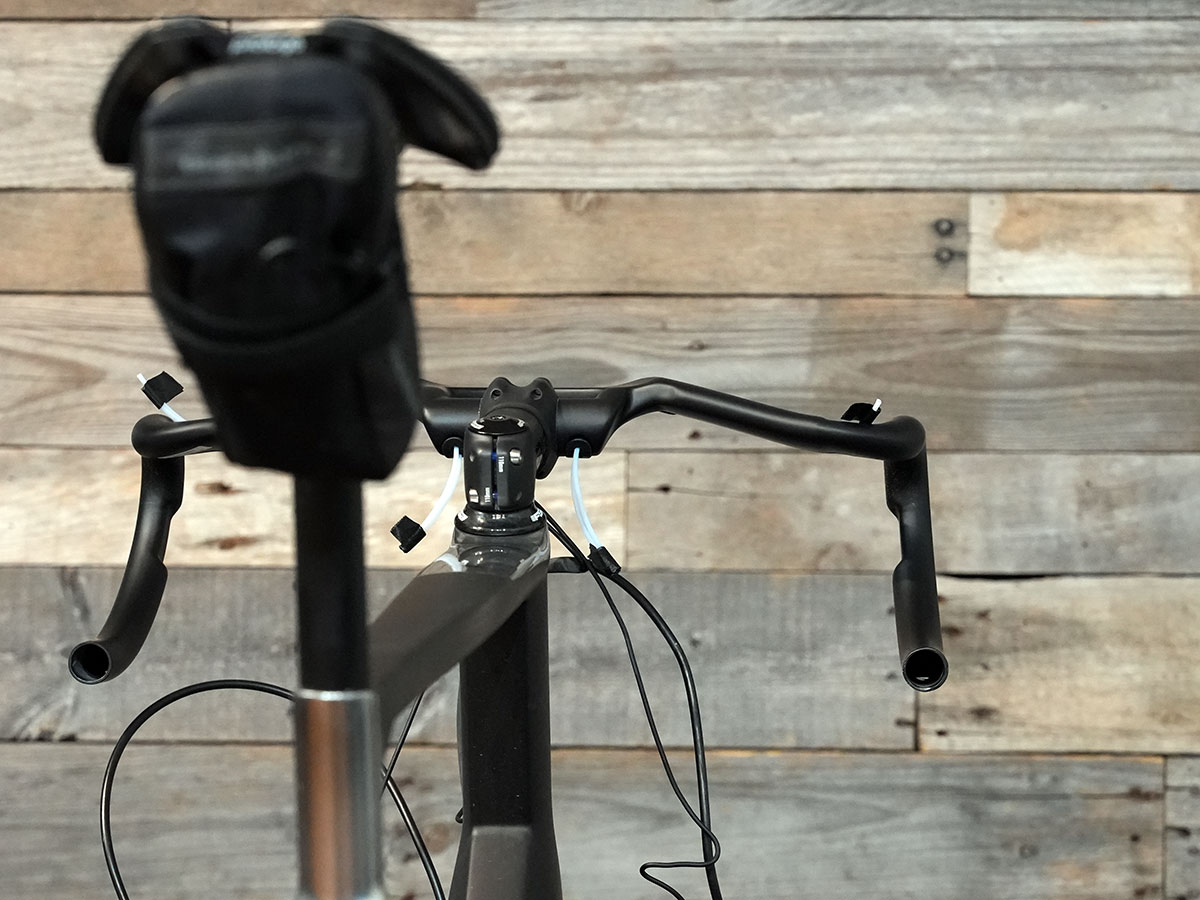 Get to the bends, and the bar is formed to provide an extremely comfortable perch for your palms and thumb. It’s designed to run the cables, wires and hoses internally…more on that below. 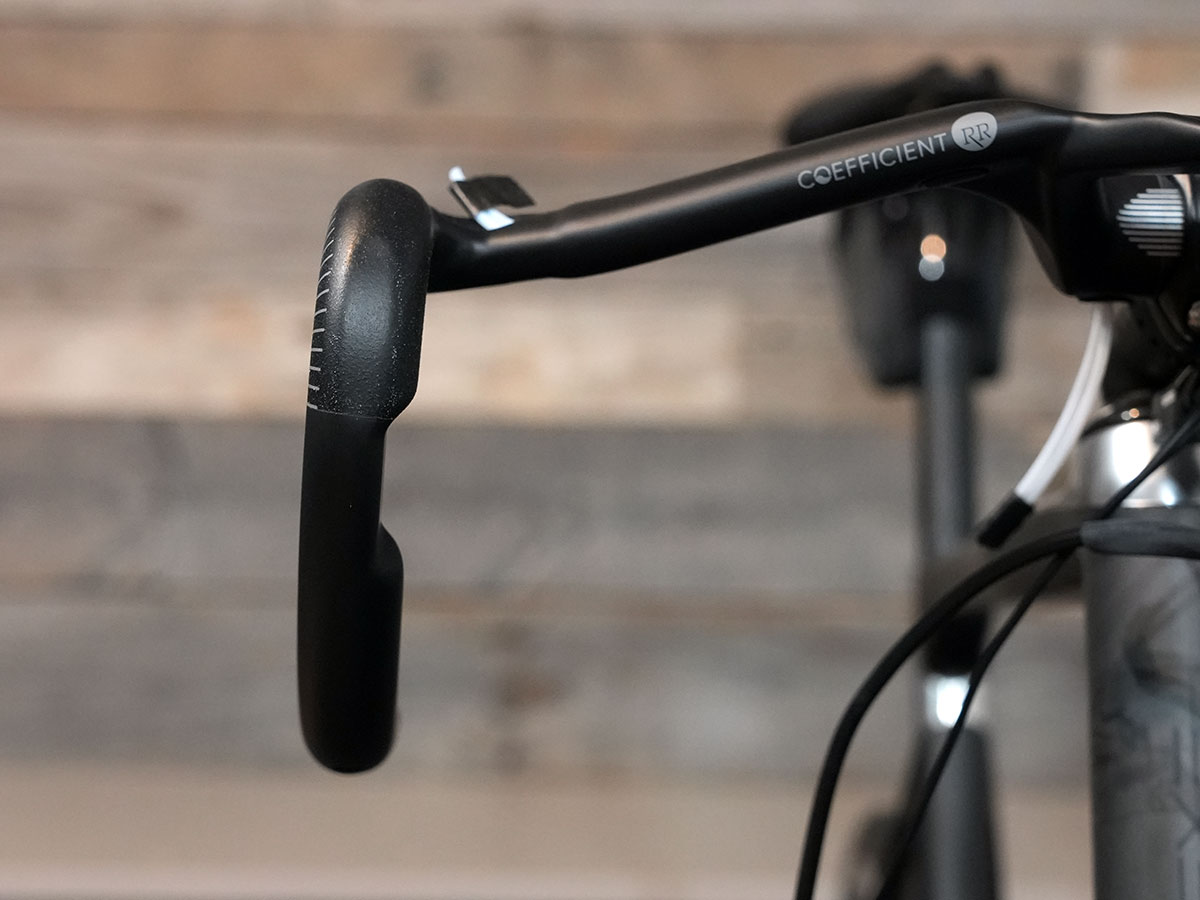 The drops use a compound curve design that’s fairly common, but add an indent for your thumb that provides a surprisingly useful little perch.

Basic specs and measurements are the same across all widths (38/40/42/44), with a few size-specific ones. Here’s what’s shared:

Above, my 42cm bar weighed in at 327g with the cable sleeves still in it (bars shipped with these pre-installed to assist with internal routing)…so, it’ll drop a gram or two with those removed. 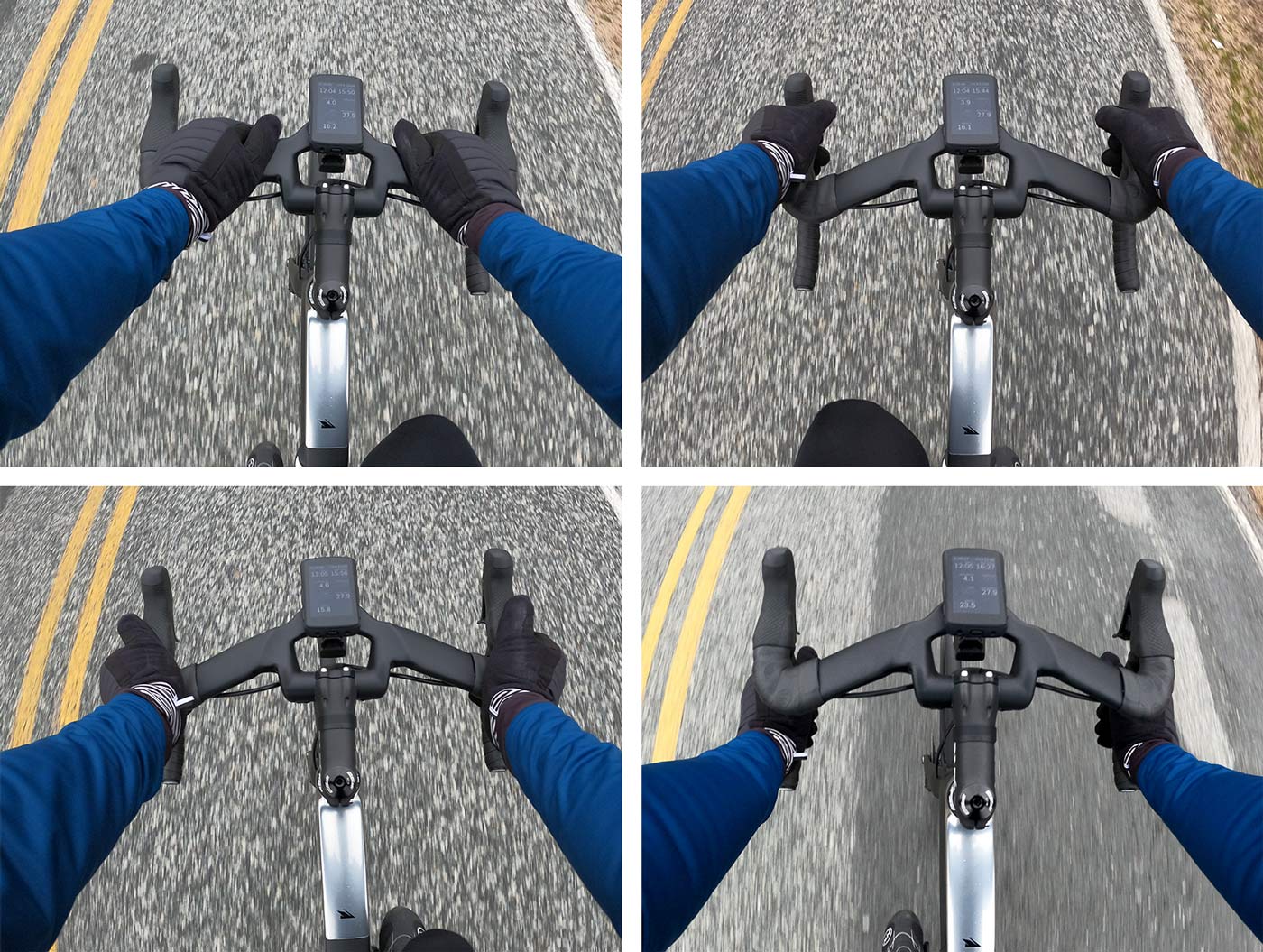 You’ll notice that I did not run my brake lines inside the bar, and that’s because early inventory of the Wave RR was limited to 42cm wide bars. They come in 38, 40, 42 and 44 cm widths, and I’d typically want the 44. But I also wanted to test it prior to launch, so I’m “borrowing” a 42 until the 44 comes in.

As such, and because I didn’t have the spare barbs and small parts to re-do my hydraulic brake install, I kept the brake hoses external. But, honestly, I’d have to take an honest look at how the Wave RR would redirect those hoses anyway. 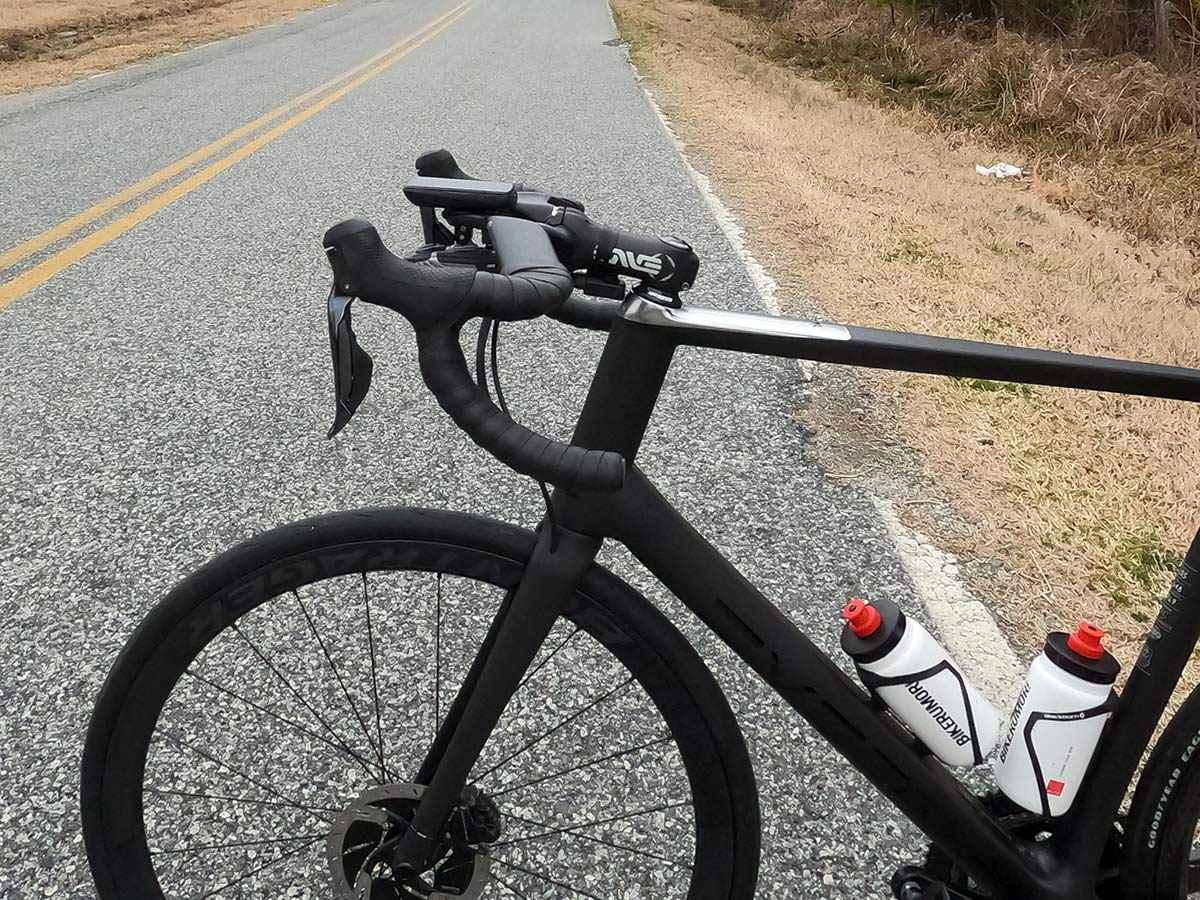 My Exept road bike puts the ports for anything running internally very low on the head tube, feeding straight into the downtube. Running the brake hose out of the back of the bar (near the stem) would put it in a weird spot to then cross in front of the head tube and into that port. 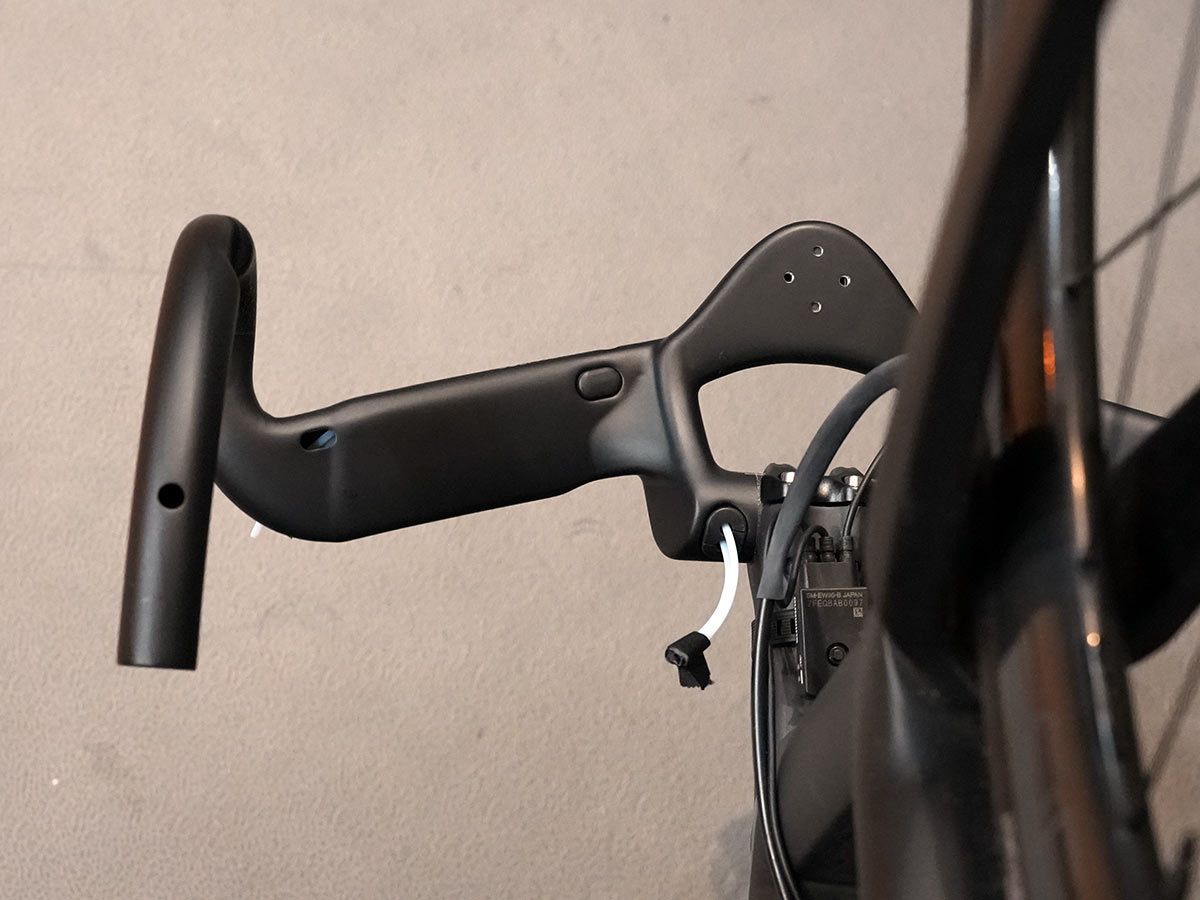 An alternative would be to use the other ports on the bottom of the flats. These are shown here plugged, and they’re intended for remote switches (like Shimano’s Di2 climber’s buttons and SRAM Blips), but I suspect for some frames, they’ll make a better option for brake hose exits.

Until then, I’ll ride it like this, and that’s fine. 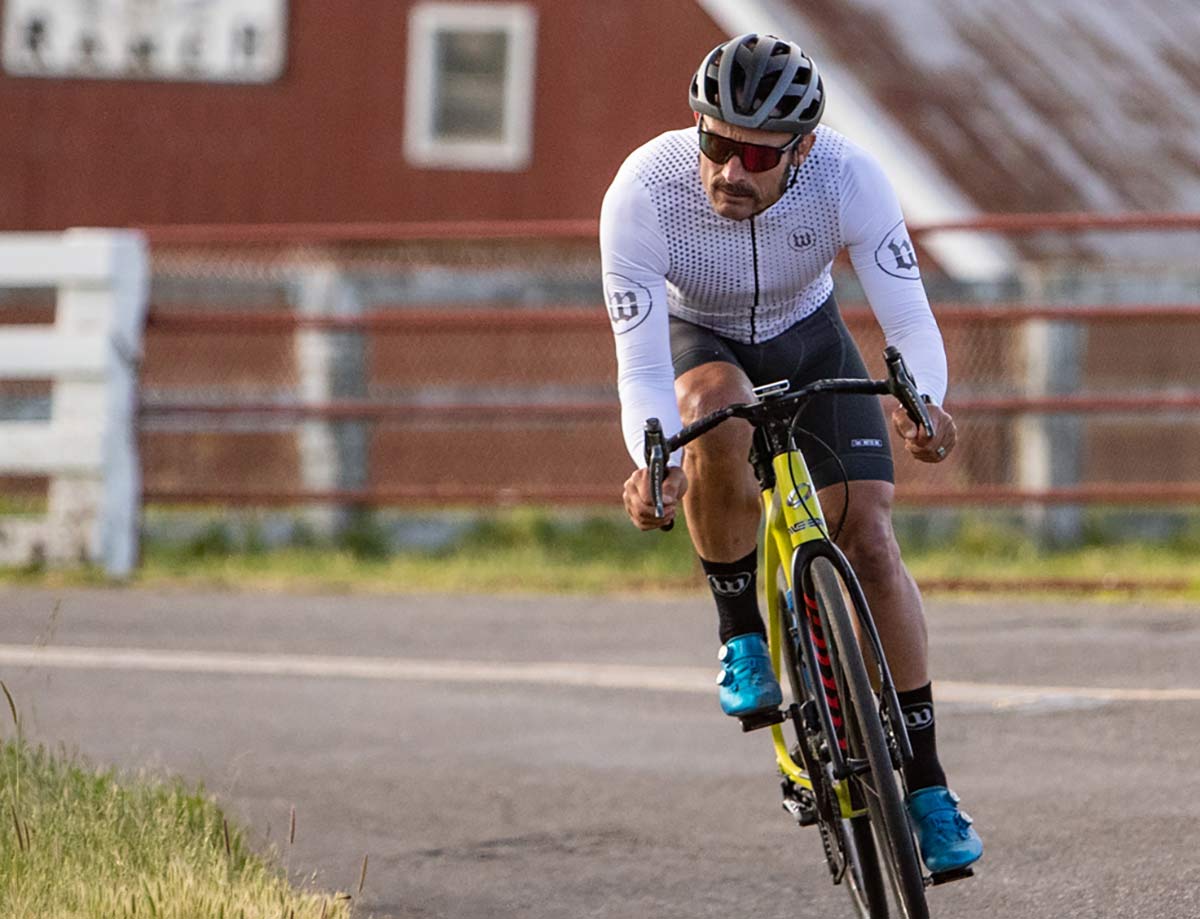 Yuri Hauswald is a fan, and shows that the Wave RR might be equally good on a gravel bike, too.

It didn’t matter where I rested my hands, it felt good. I’m inclined to say it’s the most comfortable handlebar I’ve ever ridden, but I’d like to get the 44cm width in and log more miles and longer days before definitively stating something so bold.

Coefficient says the bars put your hands in the same position as with a normal bar, however I ended up running a 10mm shorter stem and it felt better. 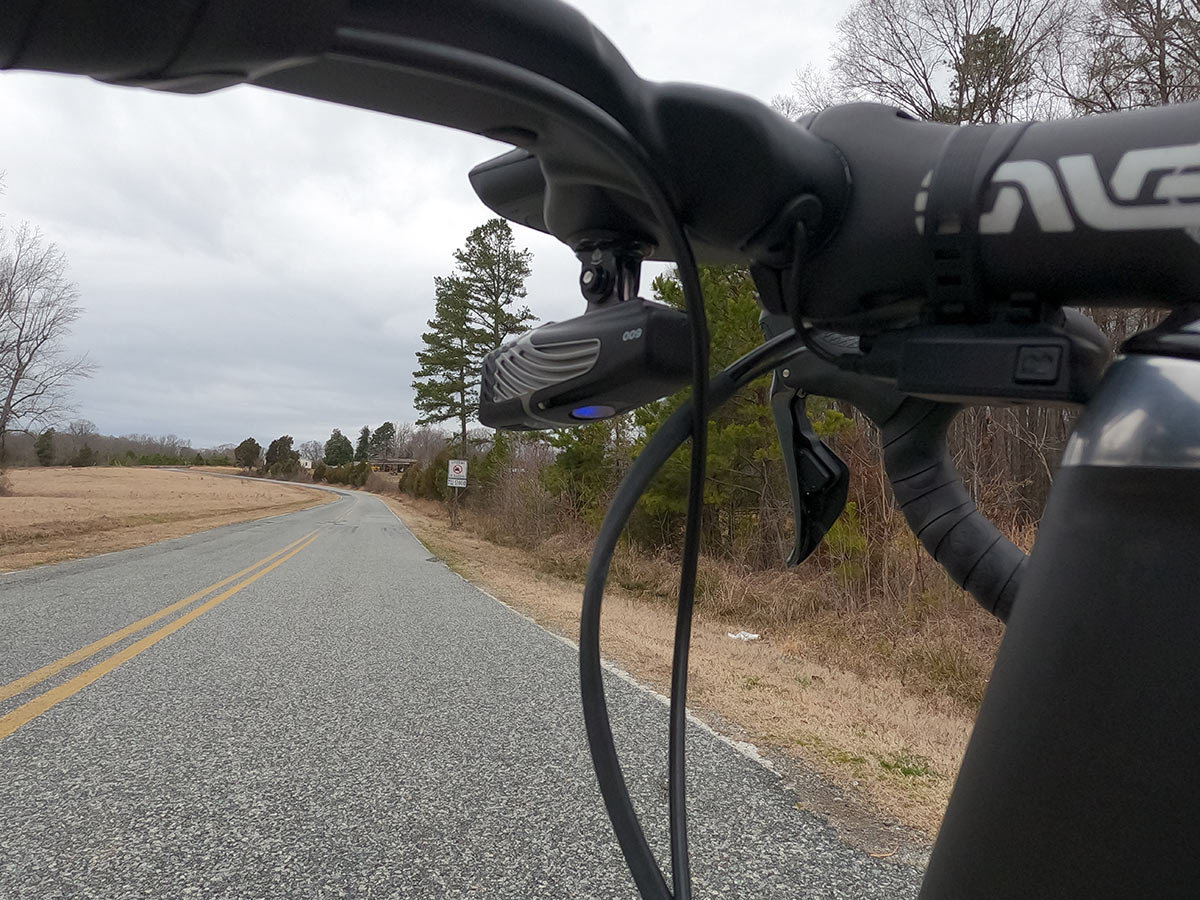 All those bends and angles do raise the question of safety. Coefficient says the bar uses Toray UD fibers throughout, and is tested to ISO standards for road and mountain biking. It feels solid, and seemed to damp road vibration quite well…which may be partly because the bars are further offset from the stem with that forward angle.

Retail is $399 and it comes with one computer mount, but options are available for 10 different GPS cycling computer brands.

There’s even a mount for a GoPro adapter underneath, which works great for lights.

Honestly?! Articles like this make me stop reading Bikerumor.

So much ** in here, I don’t know where to start.
But the worst: marketing holding your bar like that. With thumbs up the bar in stead of around it. Lesson one in riding/racing your bike is: hold your bar correctly to make sure you go where you intend to go… (which I’m sure is not: scraping your skin over asphalt)

Uhh, I’ve been riding for nearly 40 years, raced a long time and did pretty OK. Thumbs wrapped around bar has never been an issue that’s come up. In fact, when I’m busting my ass up a climb, I like having my thumbs alongside my fingers, whether on a flat or round bar. Whatever point you are trying to make, this is not the hill to die on.

I wonder if it’s possible to add clip-on aero bars to these aero bars. Looks unlikely.

No…it isn’t designed for that…and based on the design intention of this specific bar, why would you even want to put on aero bars. It was designed to allow for an aero position that the UCI has gone to great lengths to outlaw…On that note, I suspect it is a matter of time before these bars get blanketed into the UCI rules

Cant do anything that extends reach even further out . Short head tubes and long too tubes is the downfall of race bikes for 99% of the population outside pro racing over the age of 30. That’s why so many develop herniated discs later on and sore necks

Look at those things. like canyons bars had baby in a wind tunnel. Out of wedlock

This is quite brilliant really. Every little bit of the spec (other than no 46cm, but that’s a personal thing) is quite well thought out and the end product is quite beautiful.

Innovation like this probably would be suppressed if pro bikes were not struggling to come up to the weight limit.

Thumbs up for the thumb notches. It would have been good to see a photo of rider in “breakaway” position.

Ignore the ranting comment that say something about your thumb on top of the bar.
Thumb along side other 4 fingers is the correct way to hold flat top bar. So many people put thumb on the opposite side of the other 4 fingers and then complain that flat top bar does not feel comfortable… No, you just hold it wrong. Wide flat surface is very comfortable if you just put thumb along side other 4 fingers.
You don’t have to dead grip the bar all the time. When you are about to experience rough road, just a gentle squeeze of 4 fingers will hold the bar in place (providing that the bar has some anti slip texture– otherwise, add bath tub anti slip tape), or just get out of the top. Why would you put hands on bar top when riding through rough stuff that can dislodge your hand in the first place…

I’m in the process of switching my gravel handlebar for flat top one. This has nothing to do with aero but because the round bar is a lot less comfortable than flat top one. Round bar has no flat surface and the curve dig into my palm while broad flat surface of flat top bar is just flat and provide very nice area to rest my palm.

I have a pair of the first gen version on my gravel bike and after some initial skepticism about the shaping, the more I ride, the more I love the positioning of my hands on the tops. I will be ordering a pair of these for my main road bike in 44cm when they are available.

Re: the comments about thumb under or over bar. I ride thumb over when I climb alone but I wrap my thumb around the bar in urban or race/hard group ride environment. I never had a problem with hands slipping but one of the most accomplished riders/racers I knew (was also a full time courier) broke most of the bones in his face when a bump he didn’t see caused him to lose his grip and put him down. Better safe than sorry.

Neat looking bar but it’d be a lot lighter if they got ride of so much backsweep and the computer mount.

Looking good. Im a fan. Like the outsweep. I think the integrated comp mount is thoughtful but superfluous. Would rather have the comp lower in line with the bar anyway for i presume less drag.

I like the look of these for my gravel bike and the Coefficient website says that the 44cm are in stock but I couldn’t find if the bar widths are measured C-C or outside. Anyone have input on this?