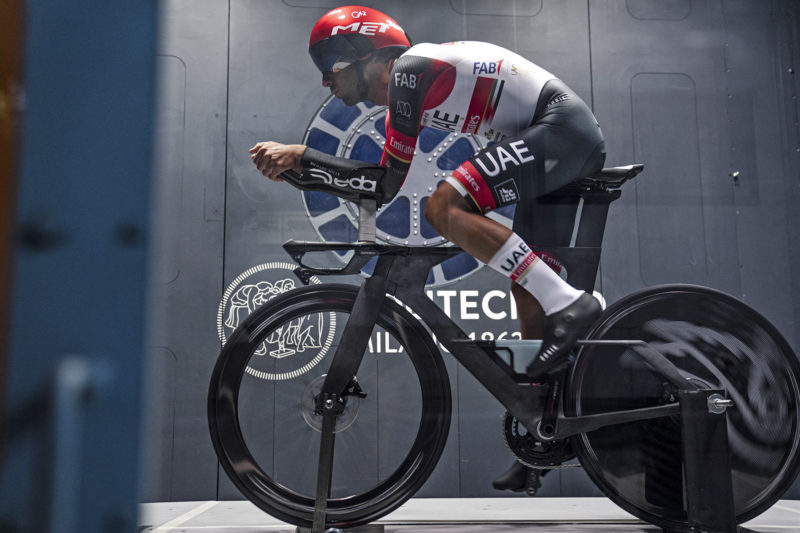 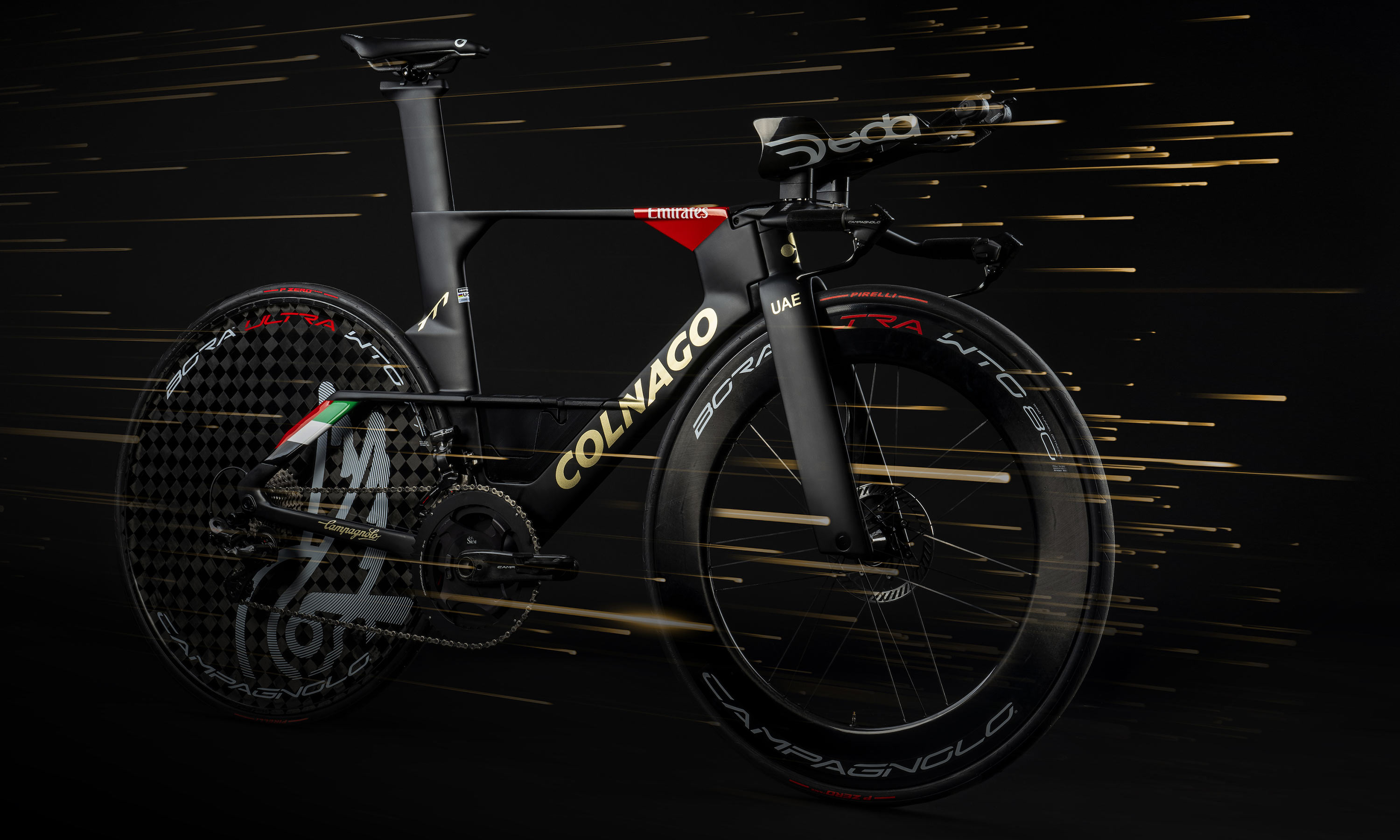 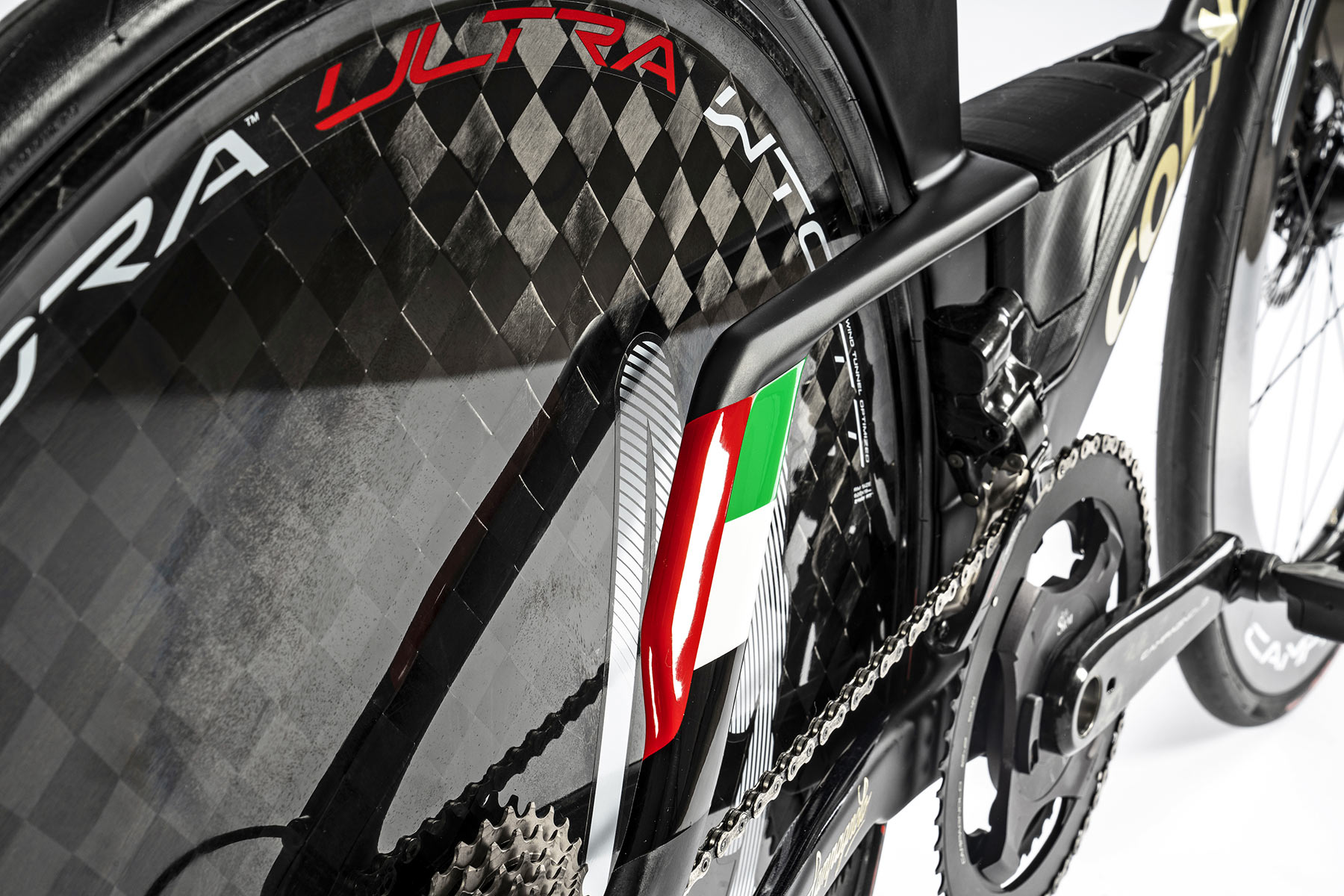 The new Colnago TT1 cuts a more distinctively angular profile through the wind with sharp edges, deeper tube profiles, complete integration, and a set of deeply dropped horizontal seatstays that transition smoothly through a nutrition & hydration box into the downtube. 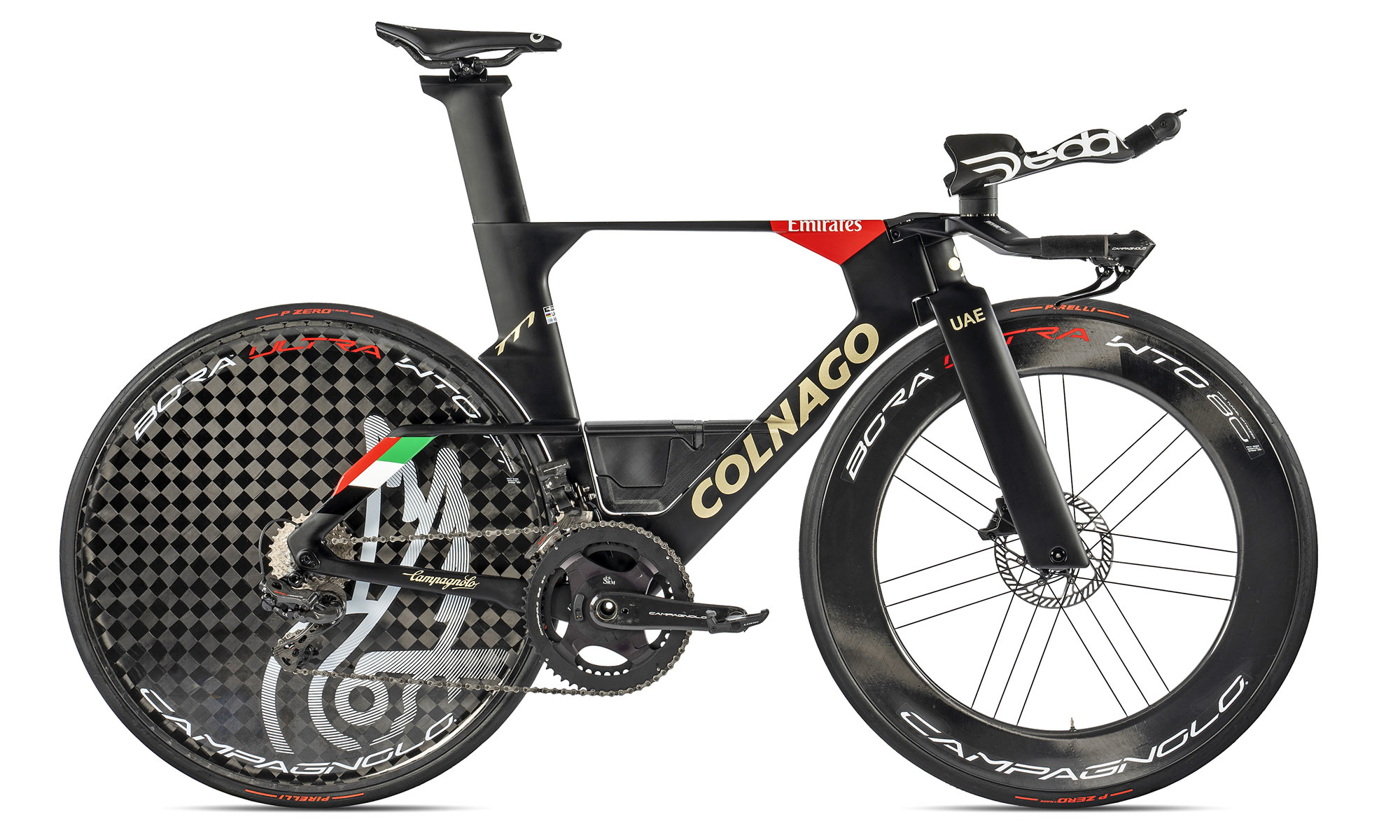 Plus, while the previous Colnago still was built up with the prior generation of Campagnolo’s electronic groupset, this new bike is teasing an all-new set of Campy Super Record EPS brakes & shifters! 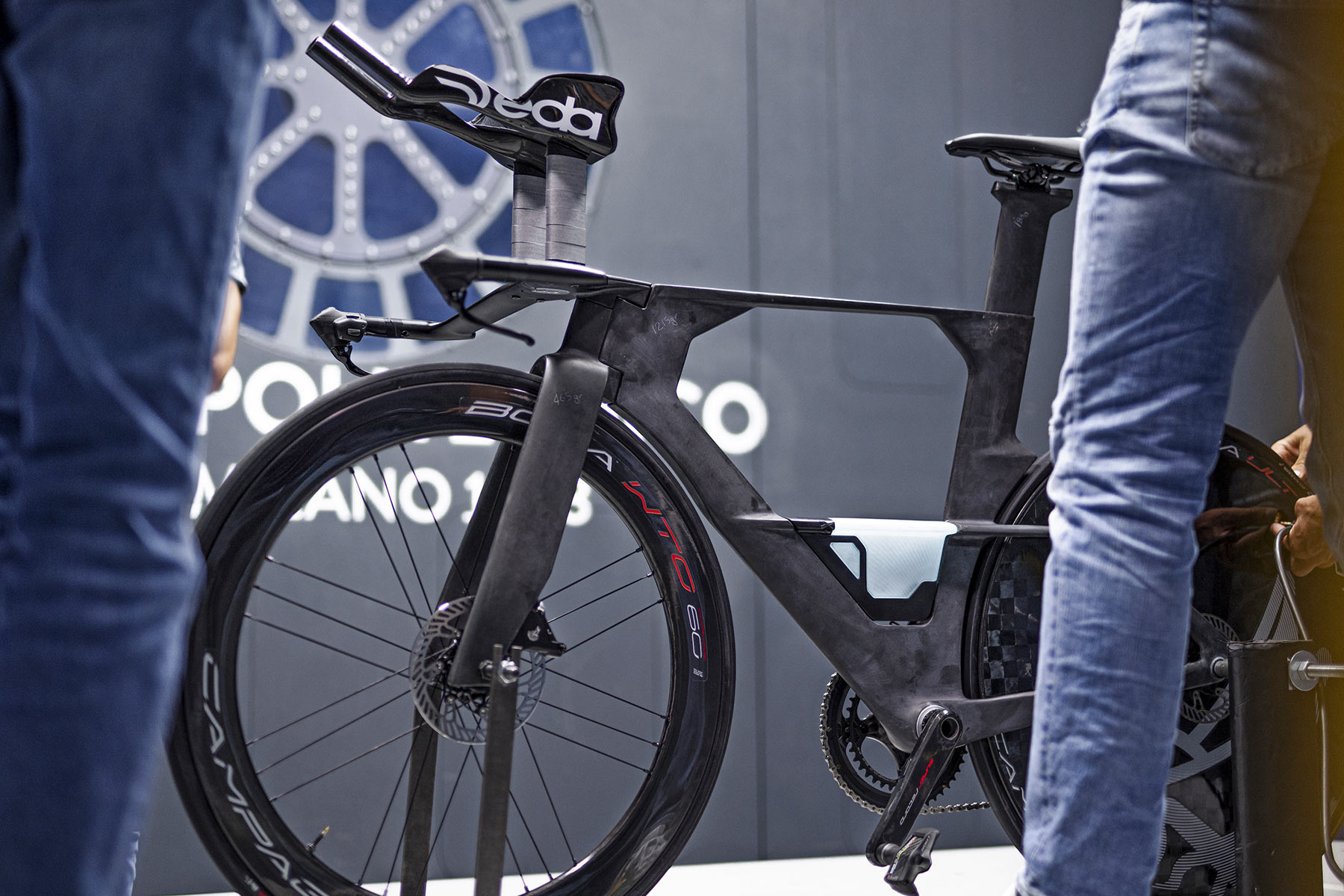 This new TT1 is the first-ever Colnago time trial bike fitted with disc brakes. But it’s also the fastest, saying the new TT bike, “represents all of Colnago’s knowledge in maximum aerodynamic performances”. Developed first in CFD, then refined in the wind tunnel at the Politecnico di Milano University, the TT1 obtains unprecedented results in terms of performance at high speeds. 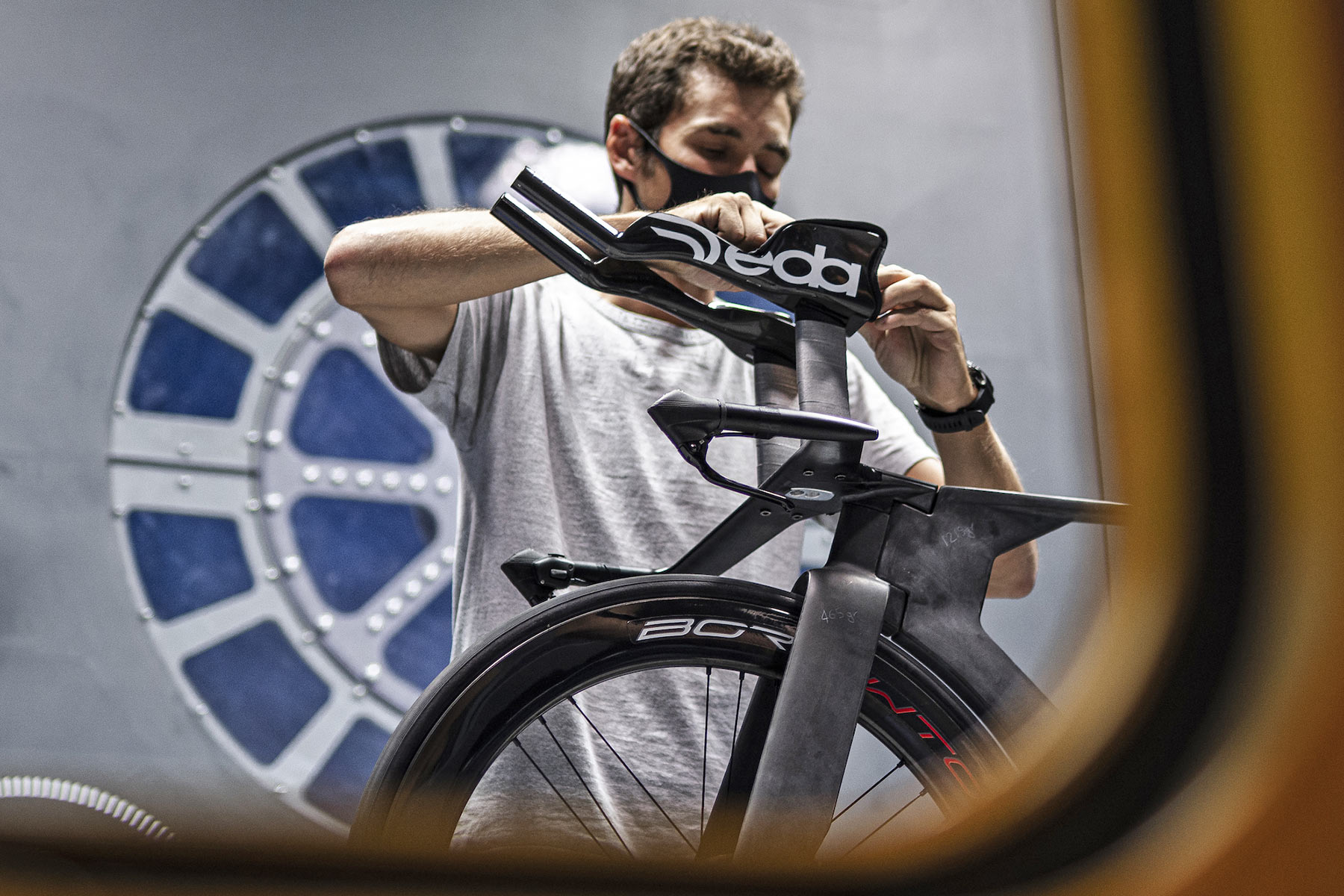 The Italian designers may have been slow to adopt discs, but say that hydraulic braking freed them up for more neatly integrated internal cable routing without compromising braking performance. The accompanying 12mm thru-axles also allowed them to engineer a stiffer bike overall without minimal weight impact, while at the same time reducing the width of individual tube profiles in the wind. 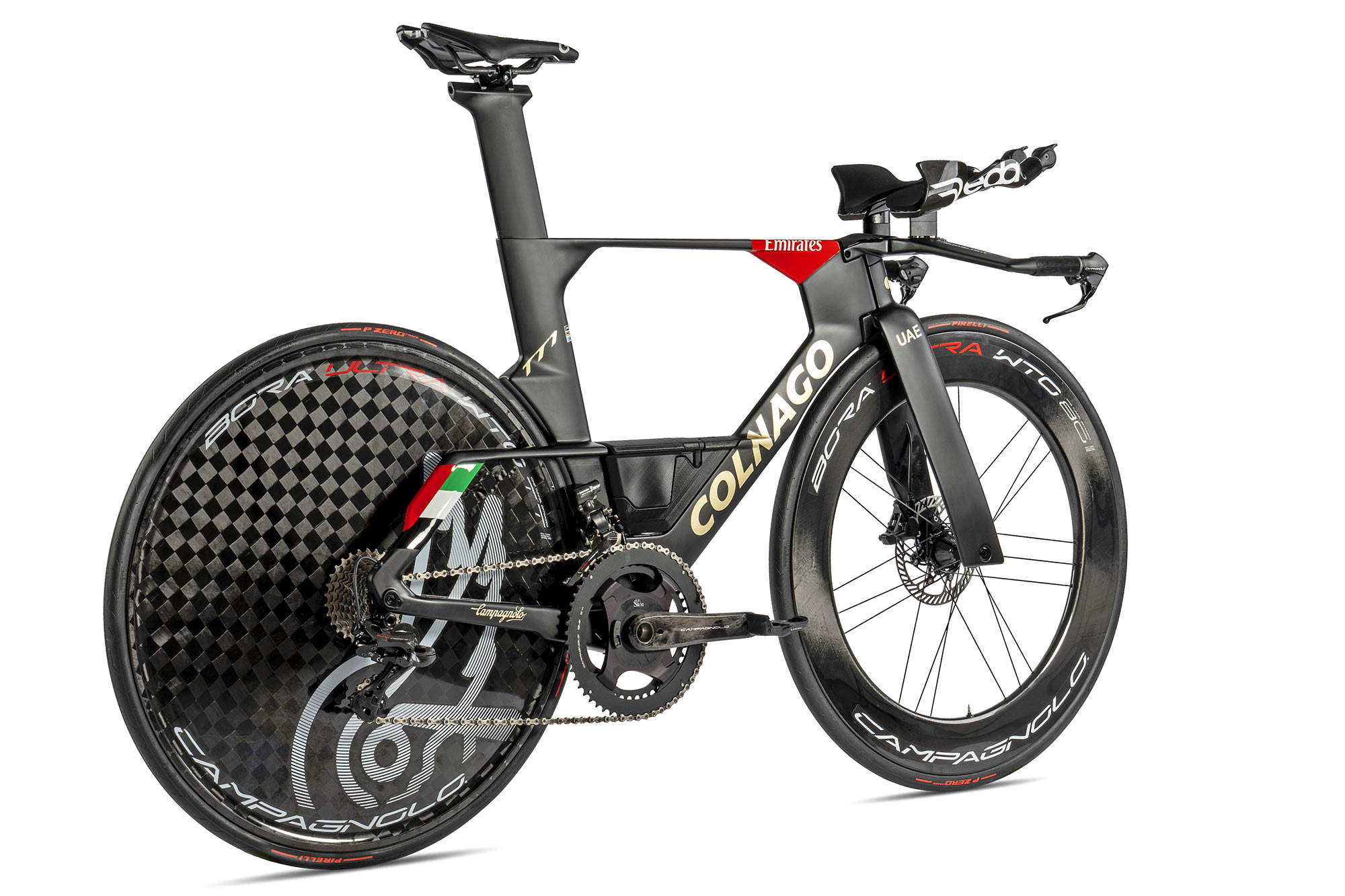 Plus, time trial bikes naturally put the rider in a narrower, more precarious position on the bike, so the more predictable disc brake performance means increased rider safety, even allowing them to hold off braking even longer to maintain their aero tuck on the bike. 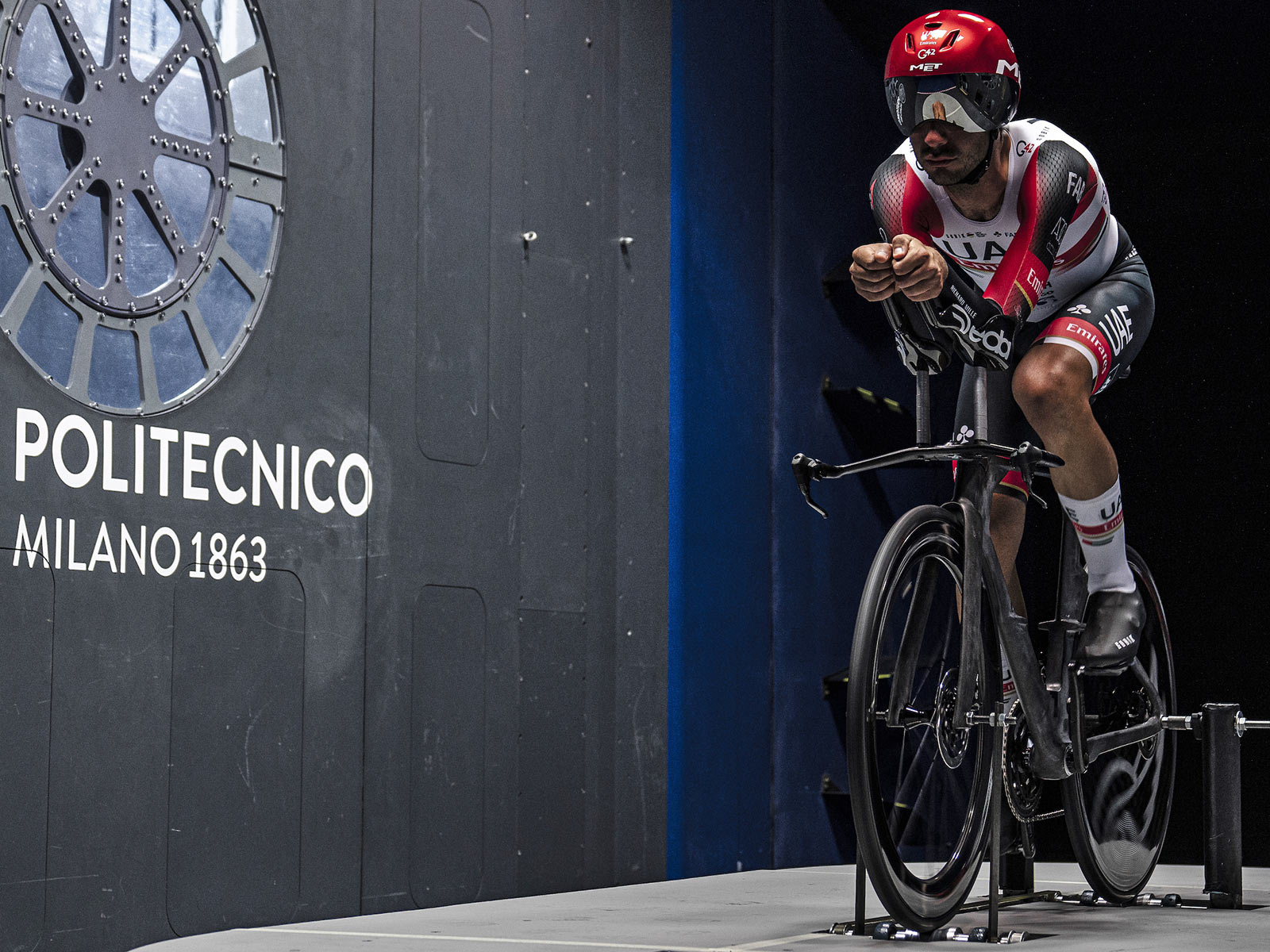 Thanks especially to the front thru-axle, Colnago says they were able to create the ‘bayonet’ fork with the legs more or less serving as two separate thin, aero plates connected just at the top & bottom without sacrificing torsional rigidity. That means a “drastically reduced” frontal area at the front of the bike where airflow is not yet disturbed, having a greater aerodynamic impact. 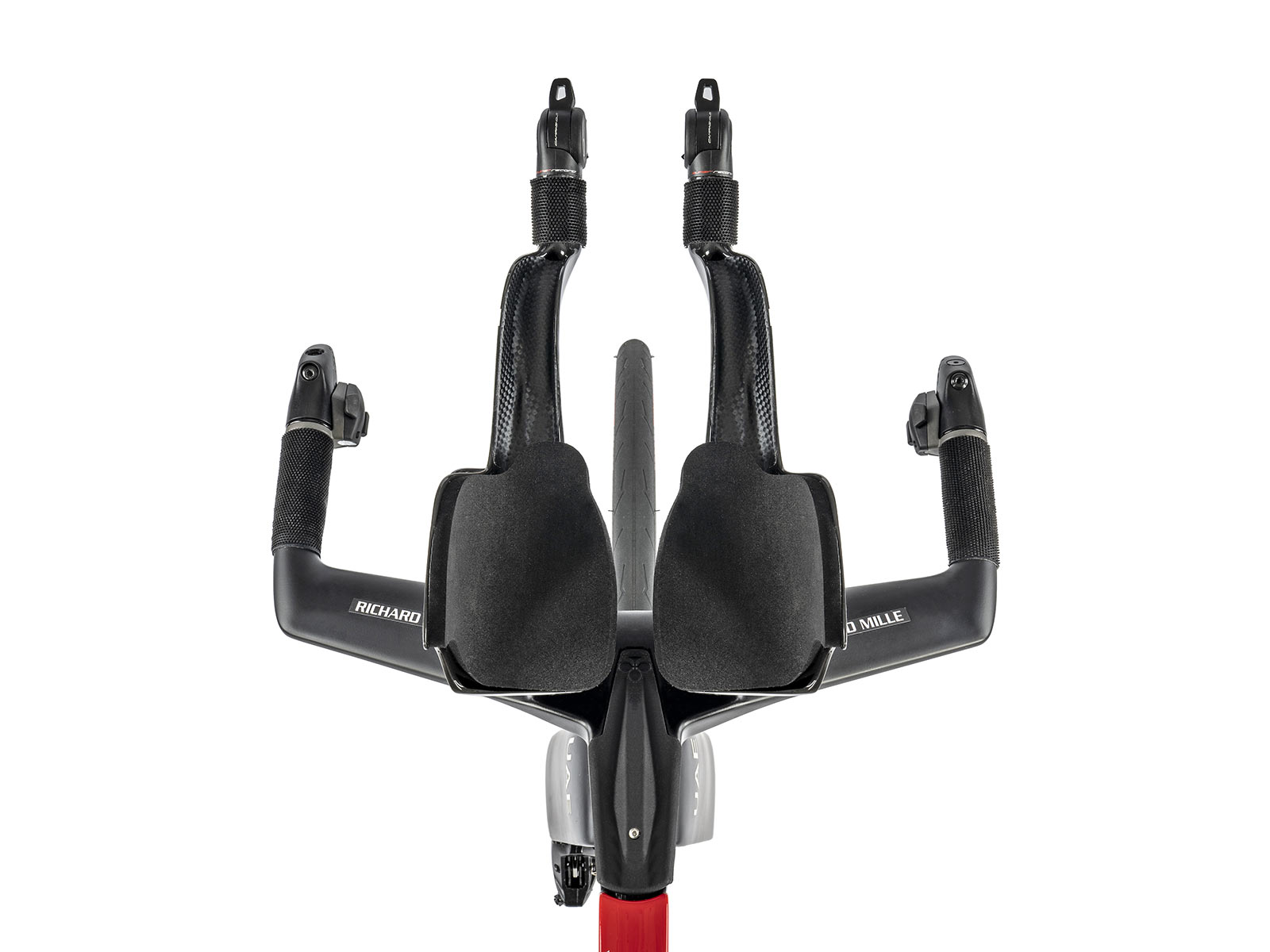 The TT1 also gets a new lighter monocoque carbon basebar that is more aero, more rigid, and highly modular. Working with Colnago’s own aero cockpit (coming soon, this autumn) or most popular aftermarket aerobars, gives the UAE team and you ultimate flexibility in dialing in the ideal aero position on the new time trial bike. 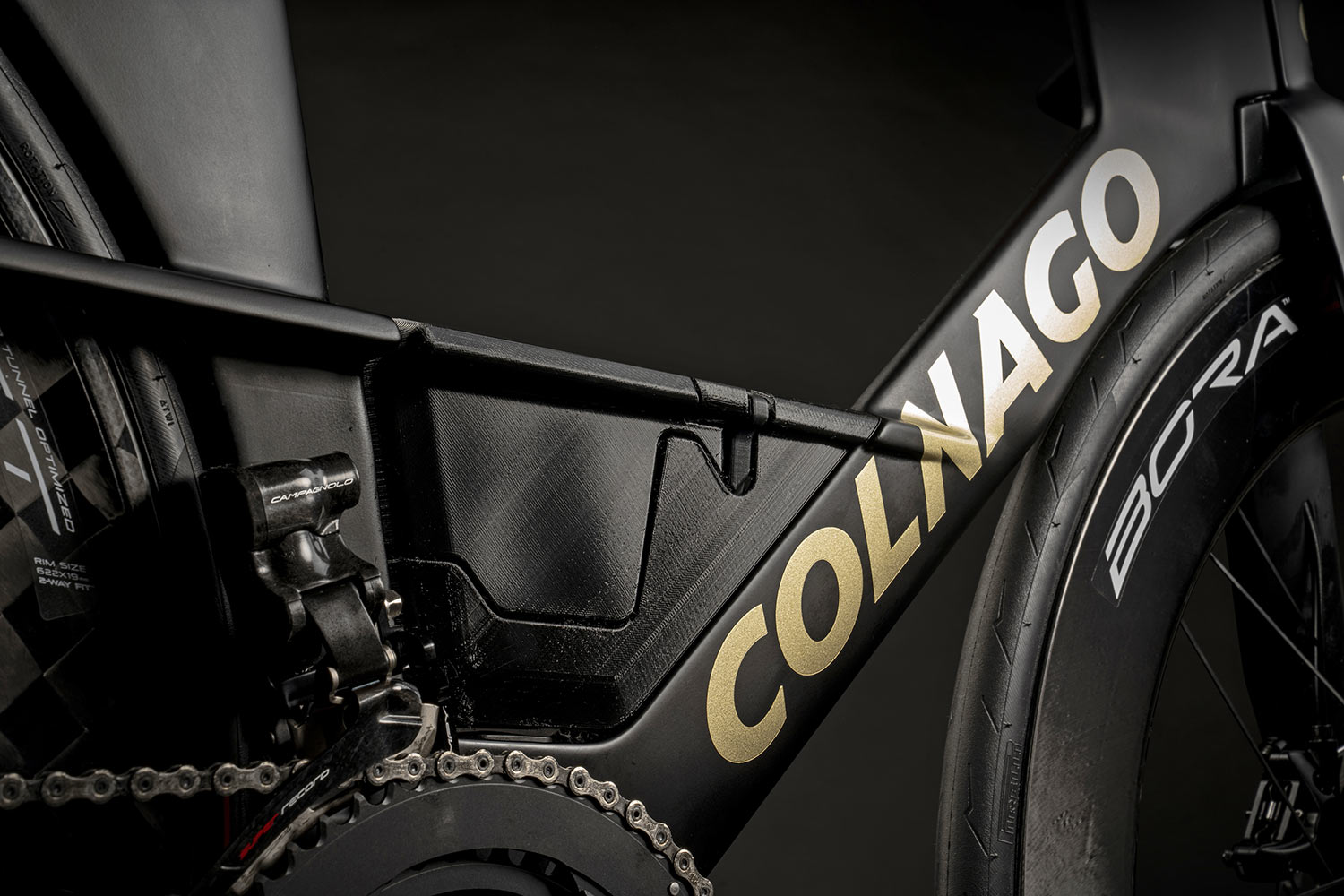 One of the details that is hard to grasp now as it’s still in a 3D-printed prototype stage, that integrated box above the bottom bracket appears to simply be a shaped aero water bottle and interlocking cage ‘kit’. Colnago says the Elite-produced bottle holds 500ml of water (available autumn 2022, too). Presumably, making it an actual bottle will get it through UCI approval, while resulting in undeniably sleek aero integration into the deep downtube and those horizontal seatstays. 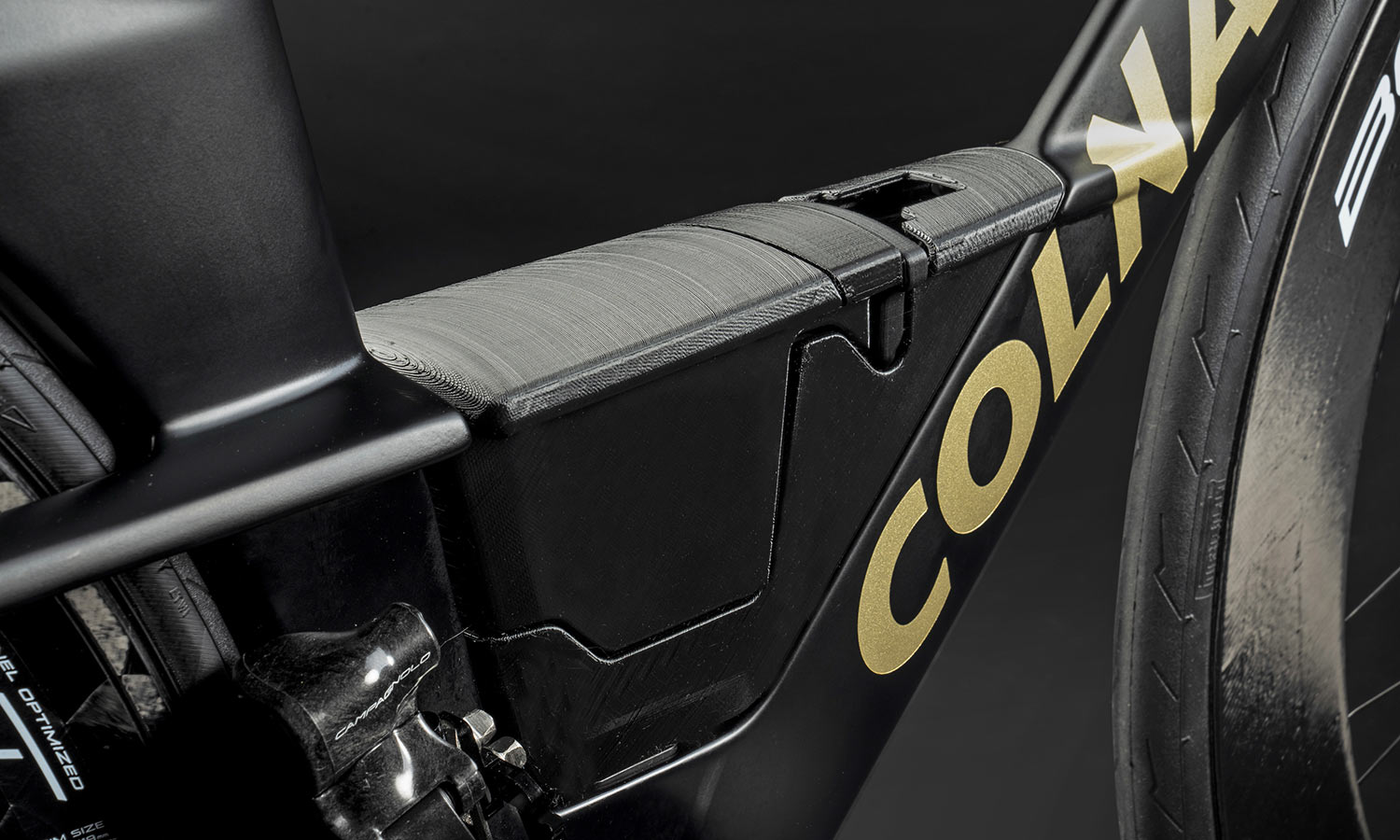 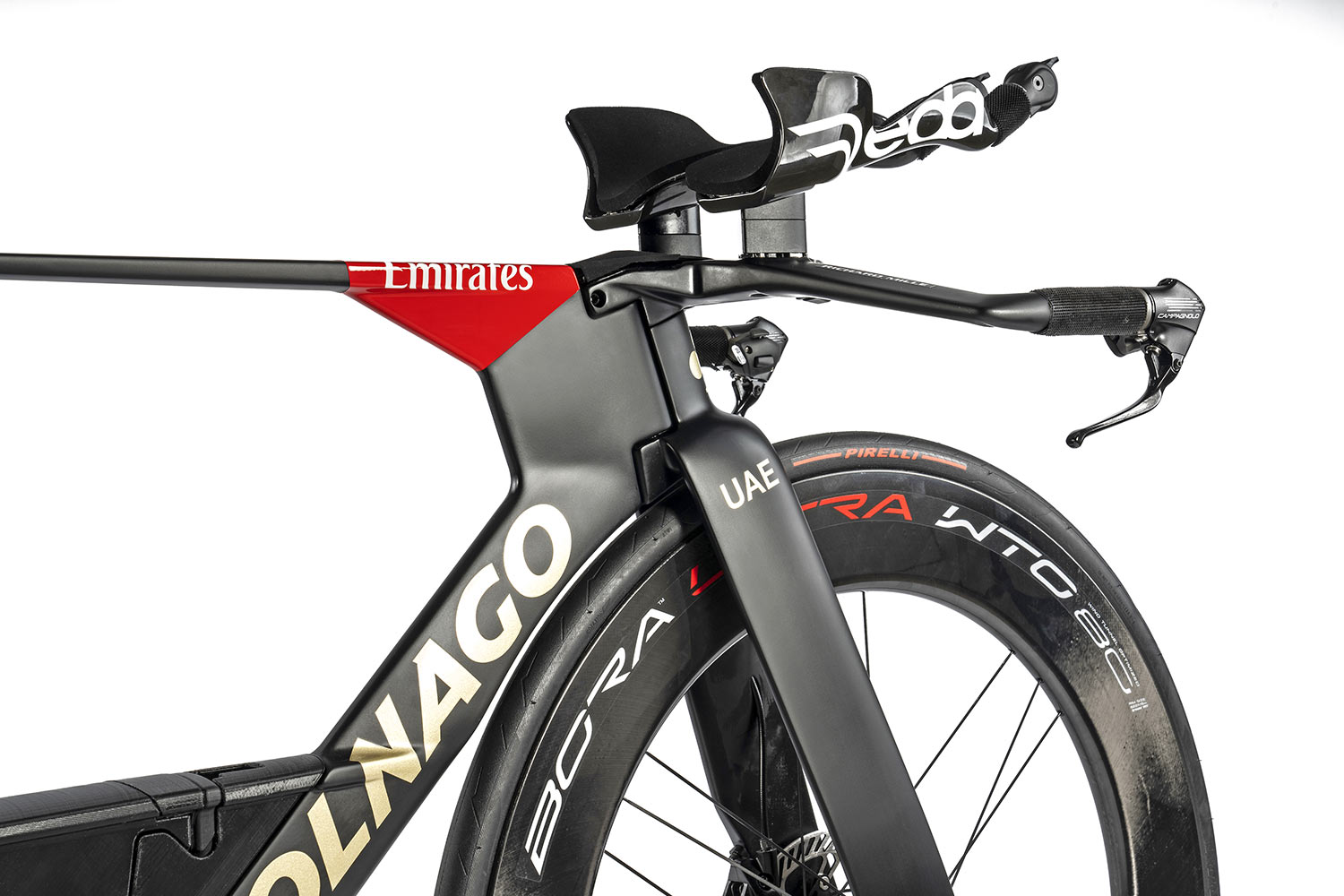 Colnago dramatically chopped down the TT1’s headtube length (frame Stack height) to optimize aerodynamics, with the thought that it gives more fit flexibility, and riders can dial-in their aero position with taller aerobar riser stacks, as needed. Riser stacks result in less drag than taller frames, plus it allowed the TT1 to move to a completely horizontal toptube vs. the K.One’s slightly sloping design. 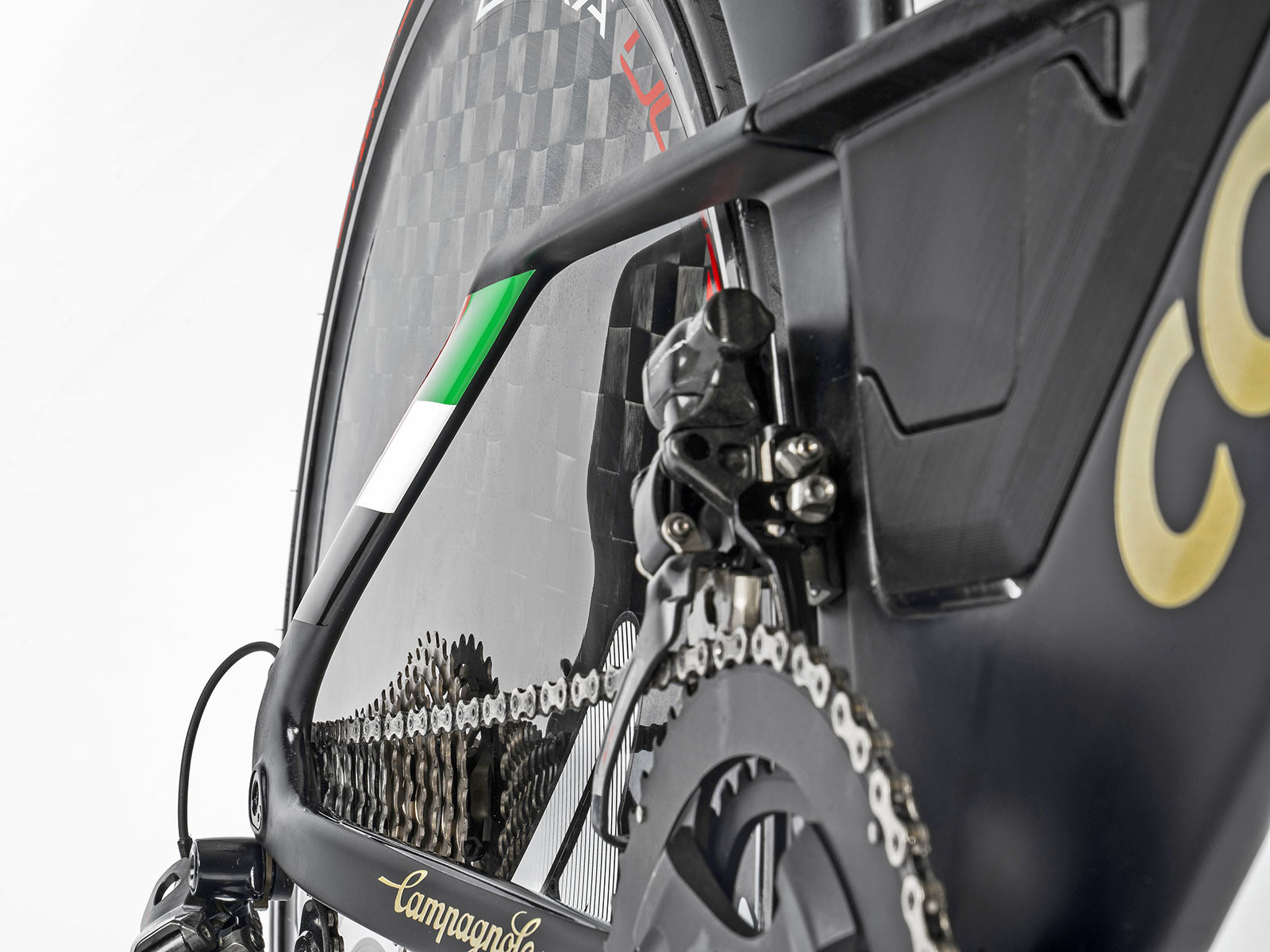 The new carbon Colnago TT1 is disc brake-only and is only compatible with electronic shift groupsets – wired or wireless.  You can however run either a 1x or 2x setup, with its removable front derailleur mount.

The new TT1 is officially still in development, so Colnago has received UCI approval to allow UAE to race the new bike as a prototype. Colnago expects there will be some minor modifications necessary to get it through the approval process and says consumer availability should be in the autumn of this year.

did they just jump the gun on this? no one in the public domain should have seen those TT brake levers and WTO80 & WTO TT before.