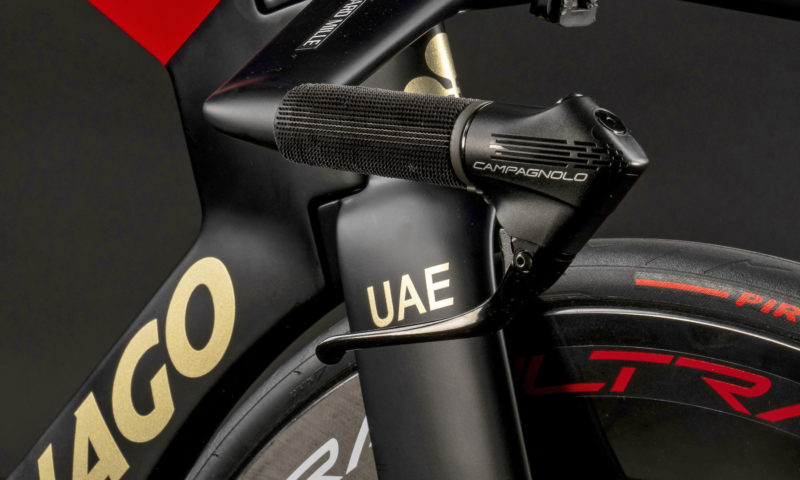 Did we just get a sneak peek at the next generation of Campagnolo Super Record EPS? And will it be wireless? Rumors persist, but the new Colnago TT1 time trial bikes of the UAE team certainly reveal something that’s been missing since the debut of Campy’s Movement 12 – a set of hydraulic disc brake time trial levers with 12-speed shifters… 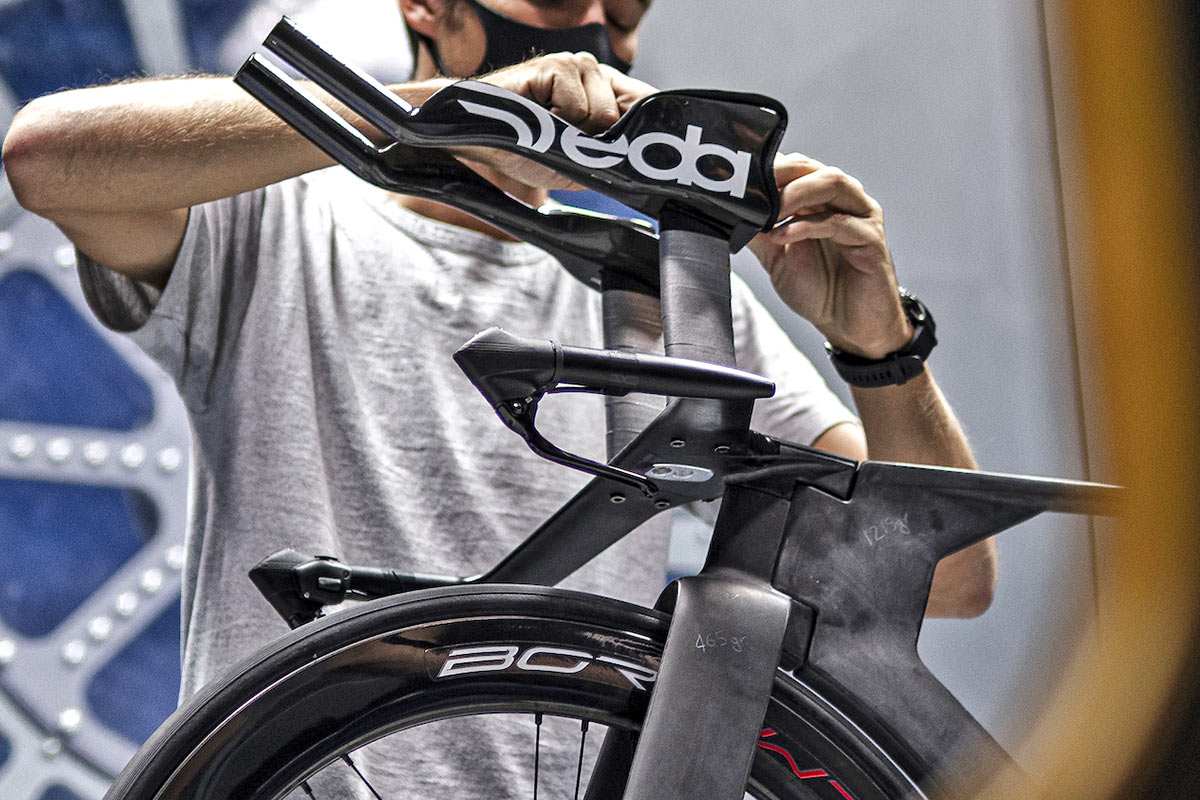 all c. Colnago (except where noted)

You see, even though Tadej Pogačar may have won the last two editions of the Tour de France on Colnago’s V3R aero road bikes with Campy Super Record EPS 12 groupsets, his K.One time trial bikes still had integrated mechanical brakes and were still running 11-speed EPS from the previous generation when rim brakes were still a thing. 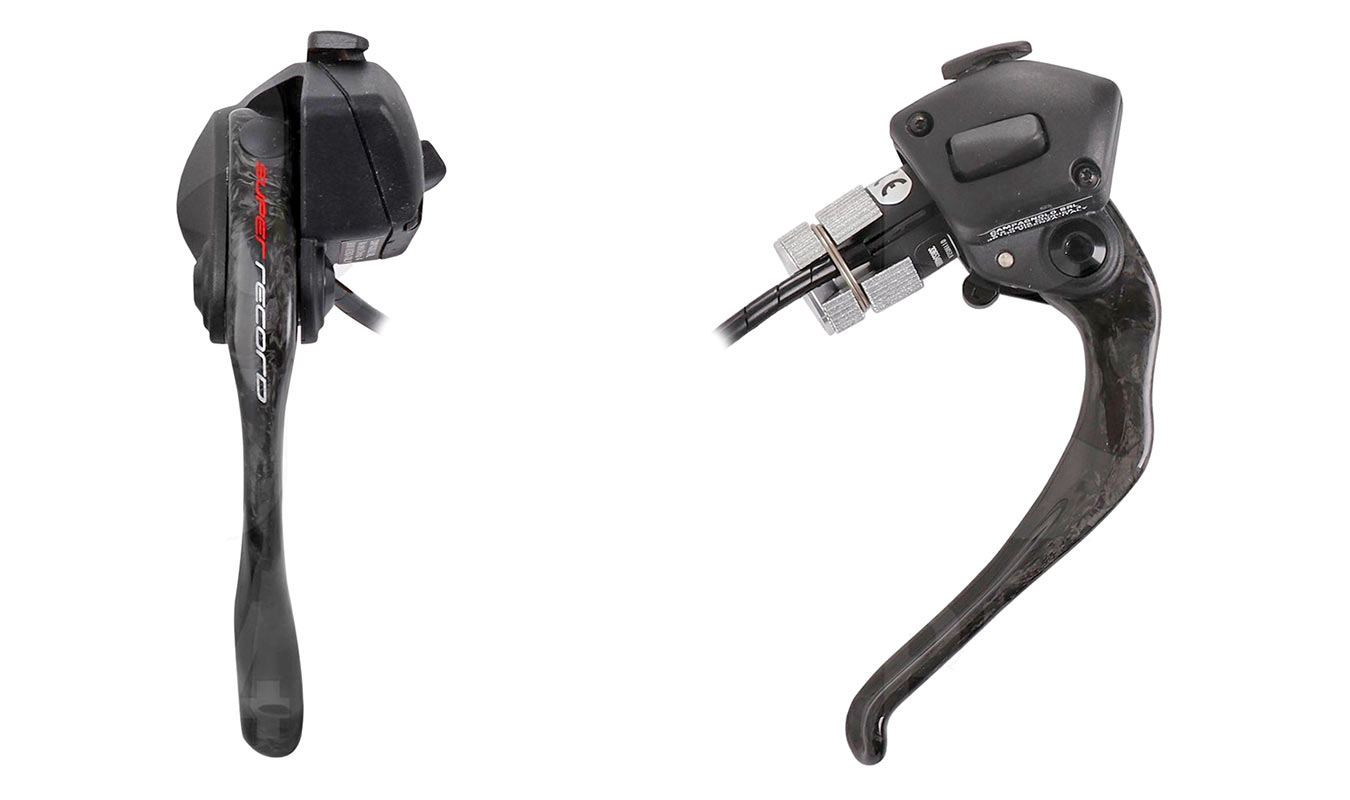 Because, even though Campy officially offered an electronic 12-speed time trial setup for mechanical-pull rim brakes (only slightly tweaked & relabeled since their 11sp debut), there was not yet a set of TT levers to use with hydraulic disc brakes. 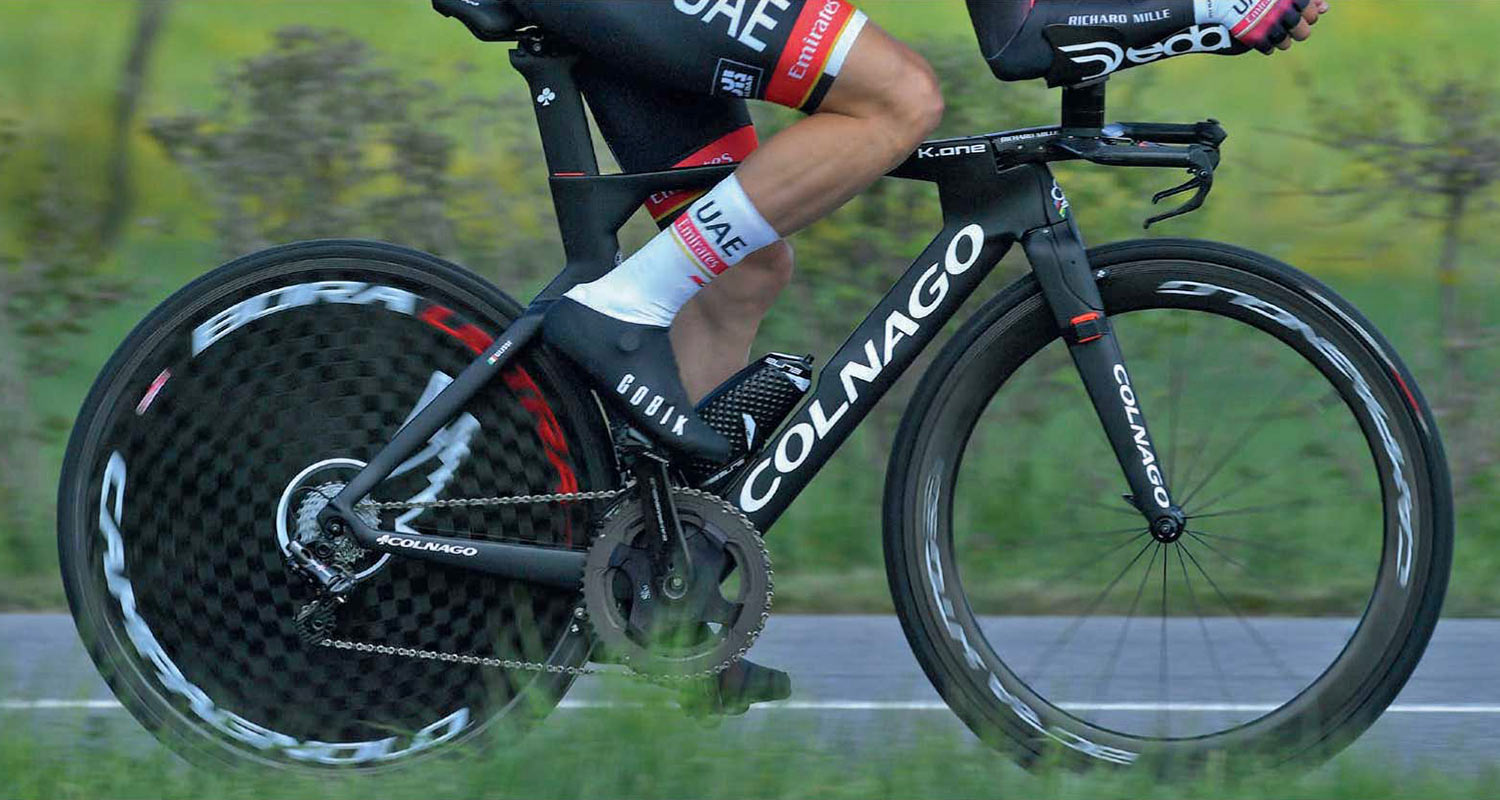 And many riders still on rim brake TT bikes like Pogačar & the UAE team, simply stuck with the 11-speed generation of EPS. 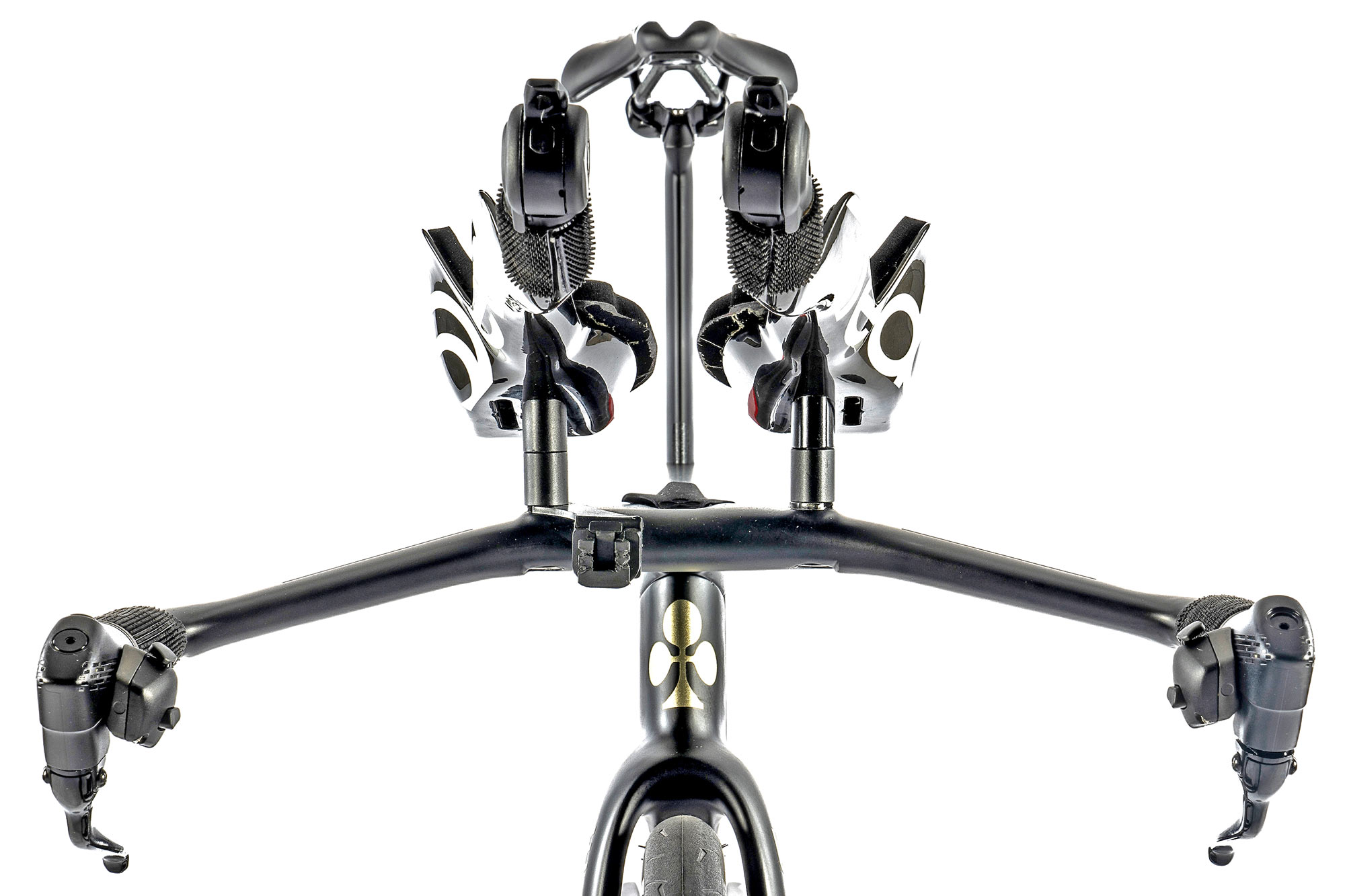 It seems odd that in the three years since Campagnolo upgraded EPS to 12-speed to outfit their professional road teams for racing, these are the first hydraulic disc TT levers we’ve seen. Just like the 12sp rim brake versions, these new 12sp disc brake TT levers plug directly into the forward-facing opening of an aero time trial basebar, and house the EPS electronic shifting mechanism inboard almost completely separately. 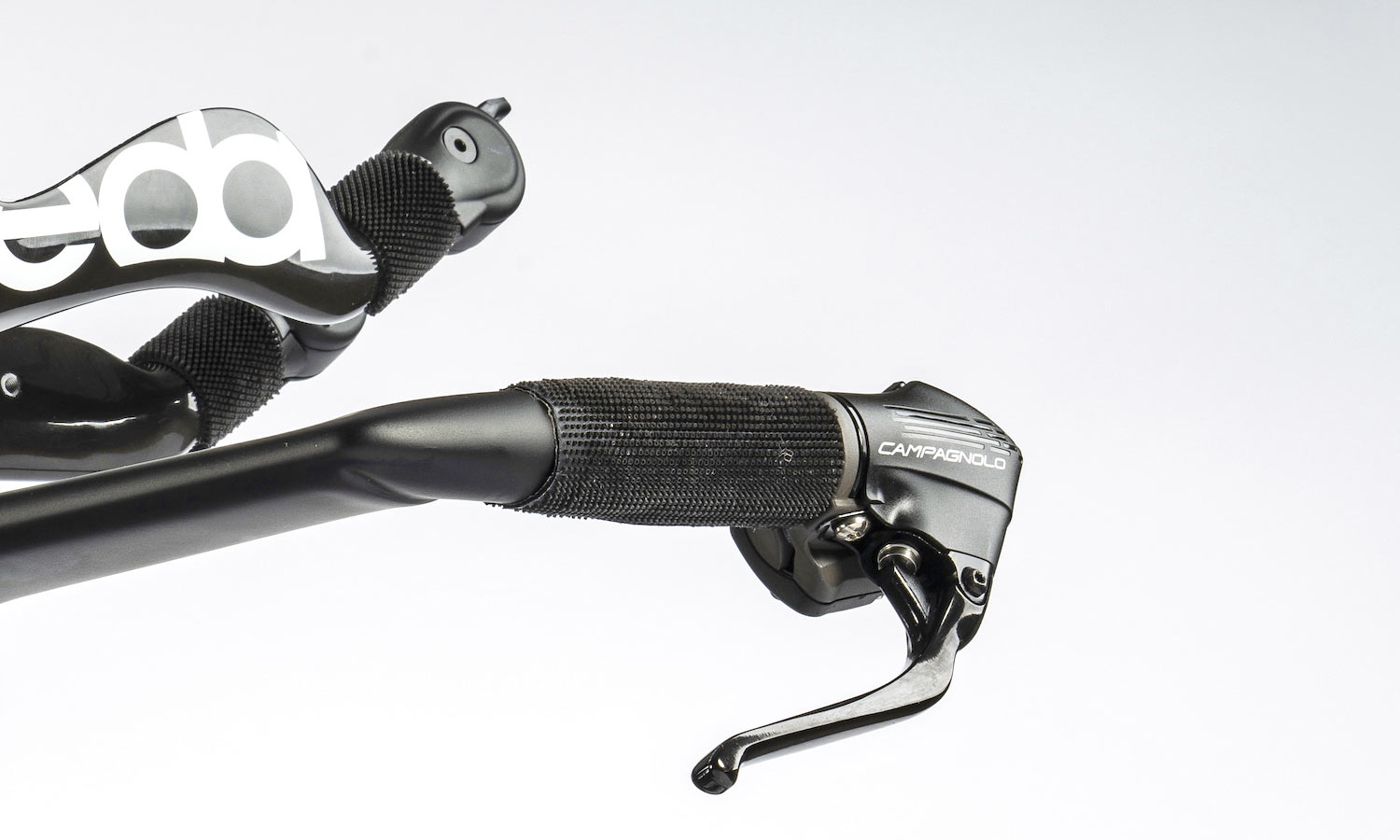 From the looks of a visible bolt & clamping mechanism at the bar (above), the shifter and brake lever assembly may even be completely independent, allowing TT racers to mix & match their shifting & braking setups.

The carbon Super Record brake lever shape looks quite similar to the rim brake version, yet with a lever pivot point further from the bar, optimized for the decreased leverage needed to actuate the hydraulic cylinder inside the larger body of the brake. Based on the size of the body, all hydraulics do appear to be outside, and in front of the bar end. 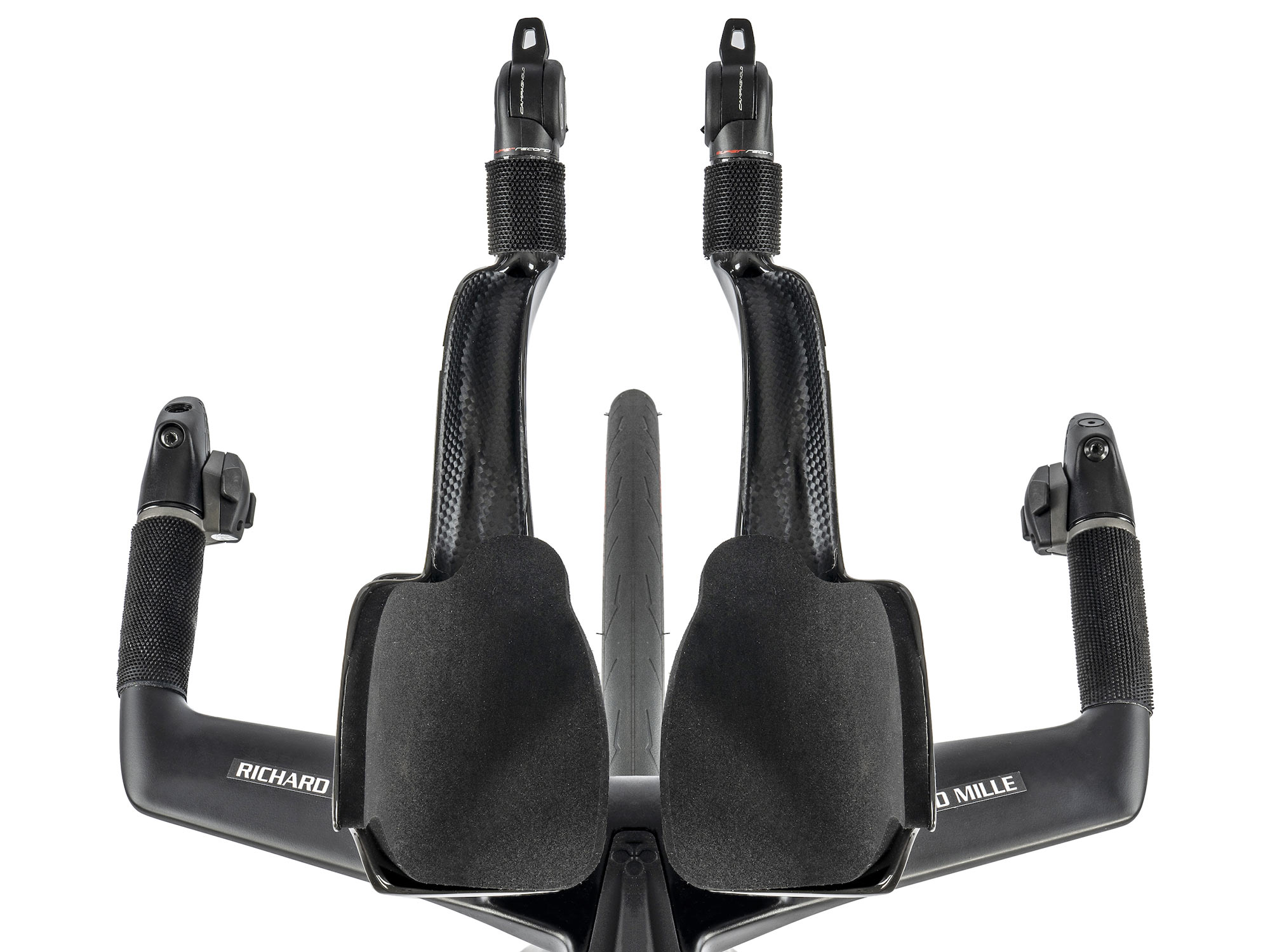 From the top, it’s even more obvious that the EPS shift assembly and its integrated clamp (lighter color composite, above) are independent of the brake lever body. The shift pod & buttons also appear to be identical to those of the current Campagnolo Super Record EPS 12 rim brake TT levers.

On the end of the aero extensions up top, we still see the same stubby EPS bar end controls which launched for the 2013 racing season. 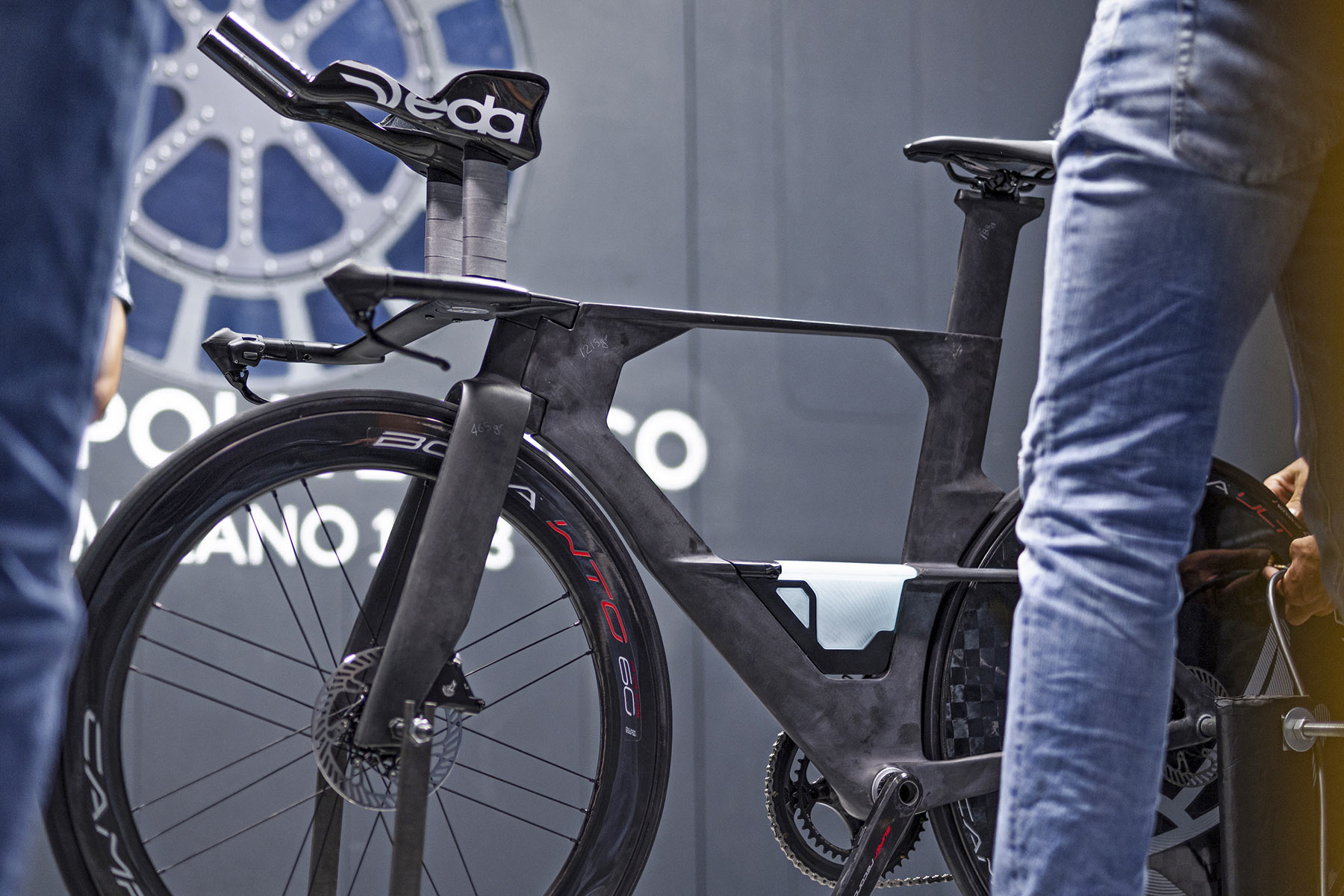 The question remains whether these new hydraulic disc brake, electronic shift time trial controls are a sneak peek at an all-new Campagnolo Super Record EPS groupset (which based on previous development schedules would make sense)? And then, whether the next EPS would be wireless, or even 13-speed to take advantage of Campagnolo’s shift to their new N3W freehub standard?

A close look at the unwrapped Colnago TT1 bar in their wind tunnel fit testing only shows one visible line coming out of each lever body. But realistically, the hydraulic brake line routes directly into the end of the bar, and the team’s race bikes still have current generation wired Super Record EPS 12 derailleurs. So we assume these EPS pods are still wired.

But the modular mounting does support the idea that wireless EPS modules could be swapped in for an easy future upgrade in the very near future? Campy has been teasing us! And there are a ton of new patents floating around. Maybe, in time for the Tour?

I’d settle for a 13 speed indexed bar-end shifter so I could run Ekar on my triathlon bike.

” yet with a lever pivot point further from the bar, optimized for the decreased leverage needed to actuate the hydraulic cylinder”
The pivot point is moved because the lever pushes instead of pulls.