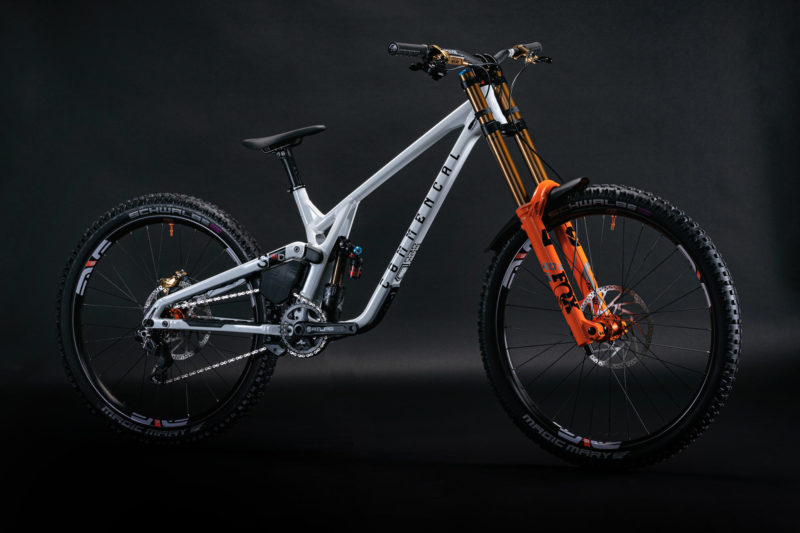 We got a good look at Commencal’s next gen alloy downhill bike as a prototype last summer in Leogang, but now it is finally here as the newly released Supreme DH V5. Well, it’s almost here. Commencal has teased a lot more details on the new gravity race bike… But unless you are on one of their sponsored teams, you still aren’t going to be racing one this year. 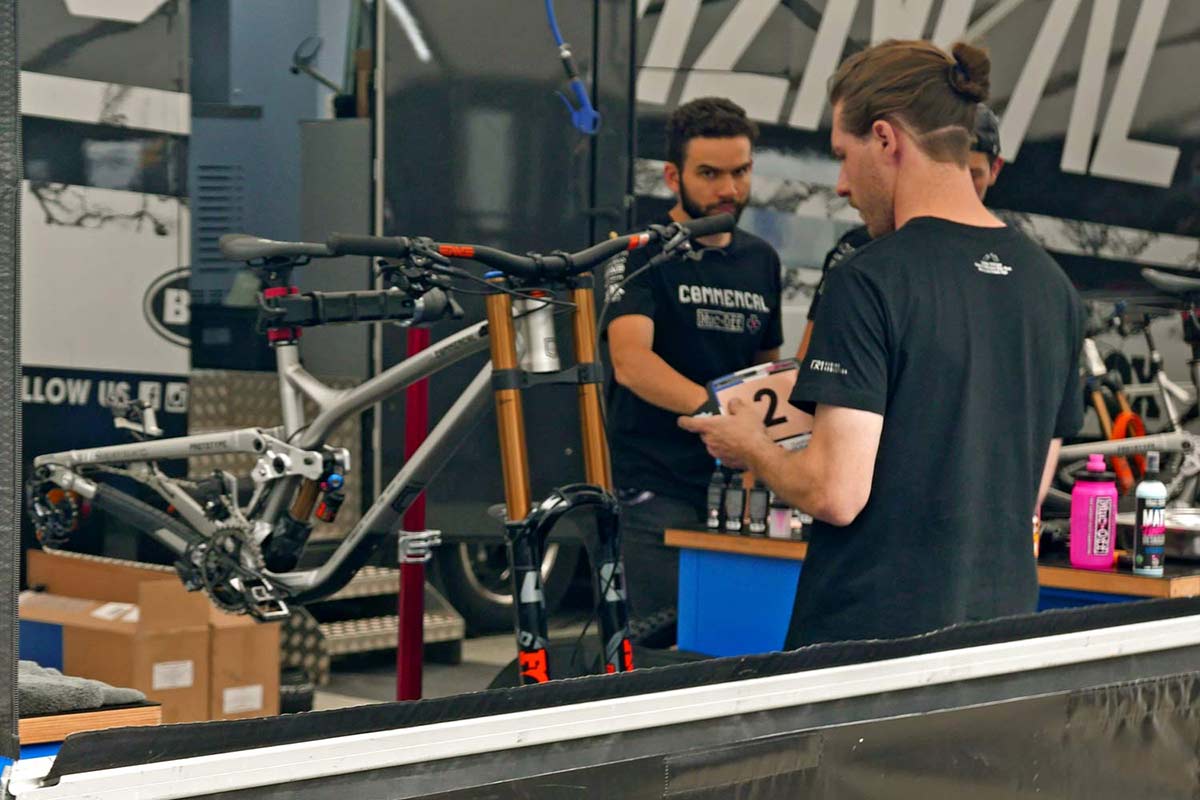 Nine months ago Commencal was calling it P019, describing it as an extreme conditions test sled with a “brand new kinematic with a Virtual High Pivot”. Beyond a new pivot location & idler pulley, it had some wild new linkage concepts going on too. So, of course we already suspected that this prototype would be their next Supreme DH bike. You don’t mount a number “2” onto just any test bike. 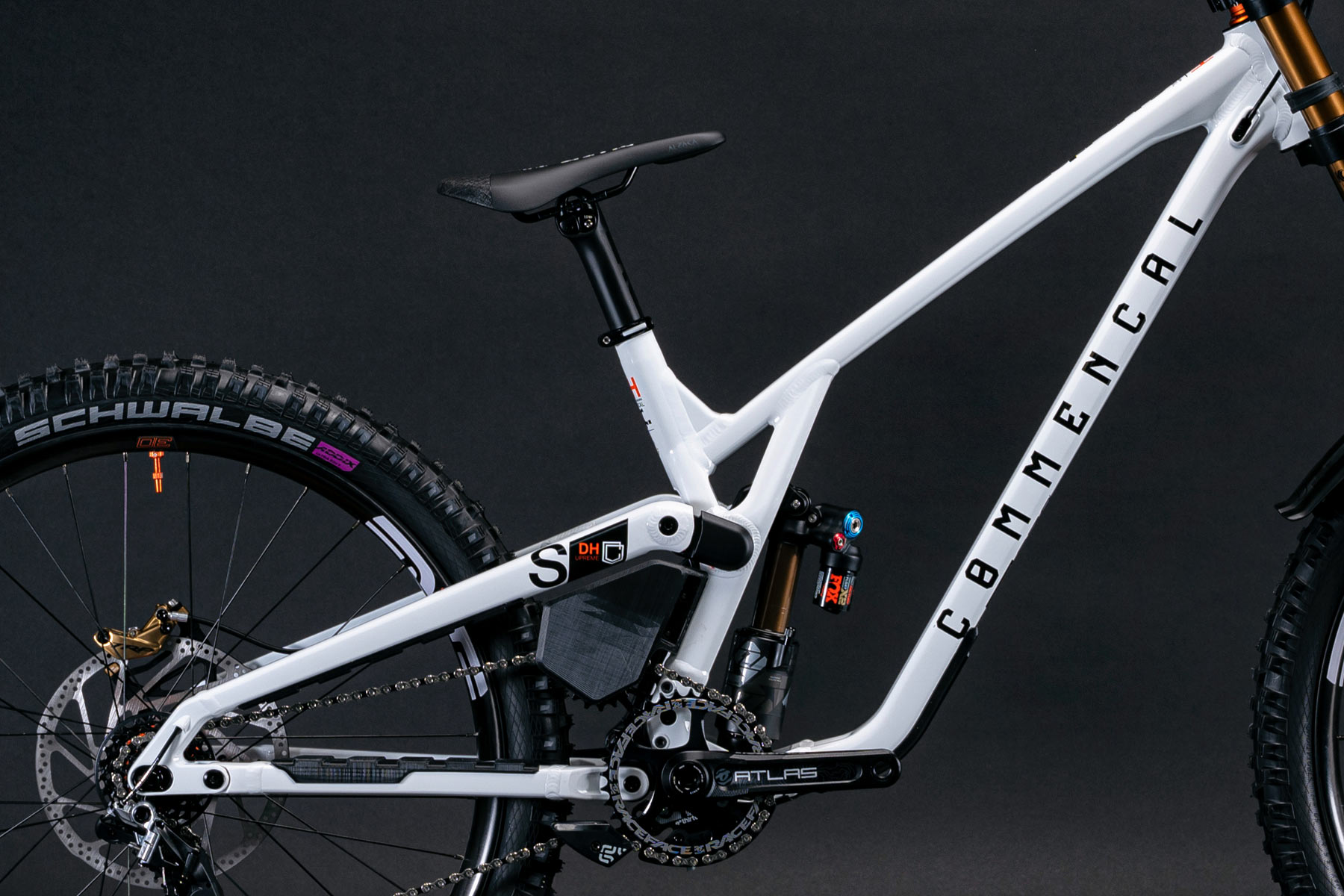 all others c. Commencal, photos by Nicolas Brizin

Now, it’s official. Sort of. The new Supreme DH V5 officially enters the fray in 2022. And we have tons of photos to dig through. But only tiny bits of true confirmed detail. 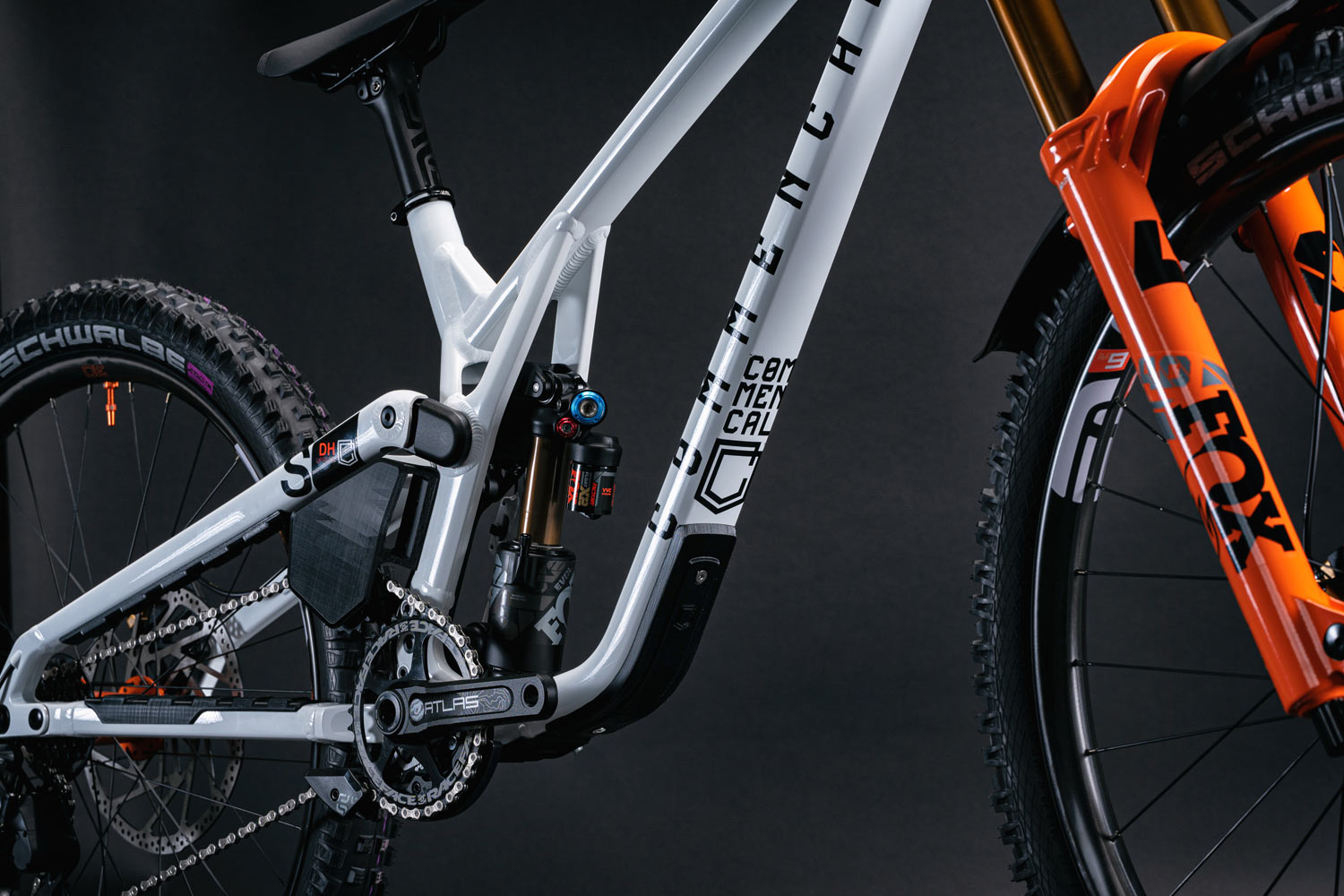 It is still a mullet and aluminum, and likely to stay that way, now with a more refined mix of shaped tubes and machined details. Amaury Pierron raced on a 205mm travel bike last season, so that’s pretty likely to stay, as well. 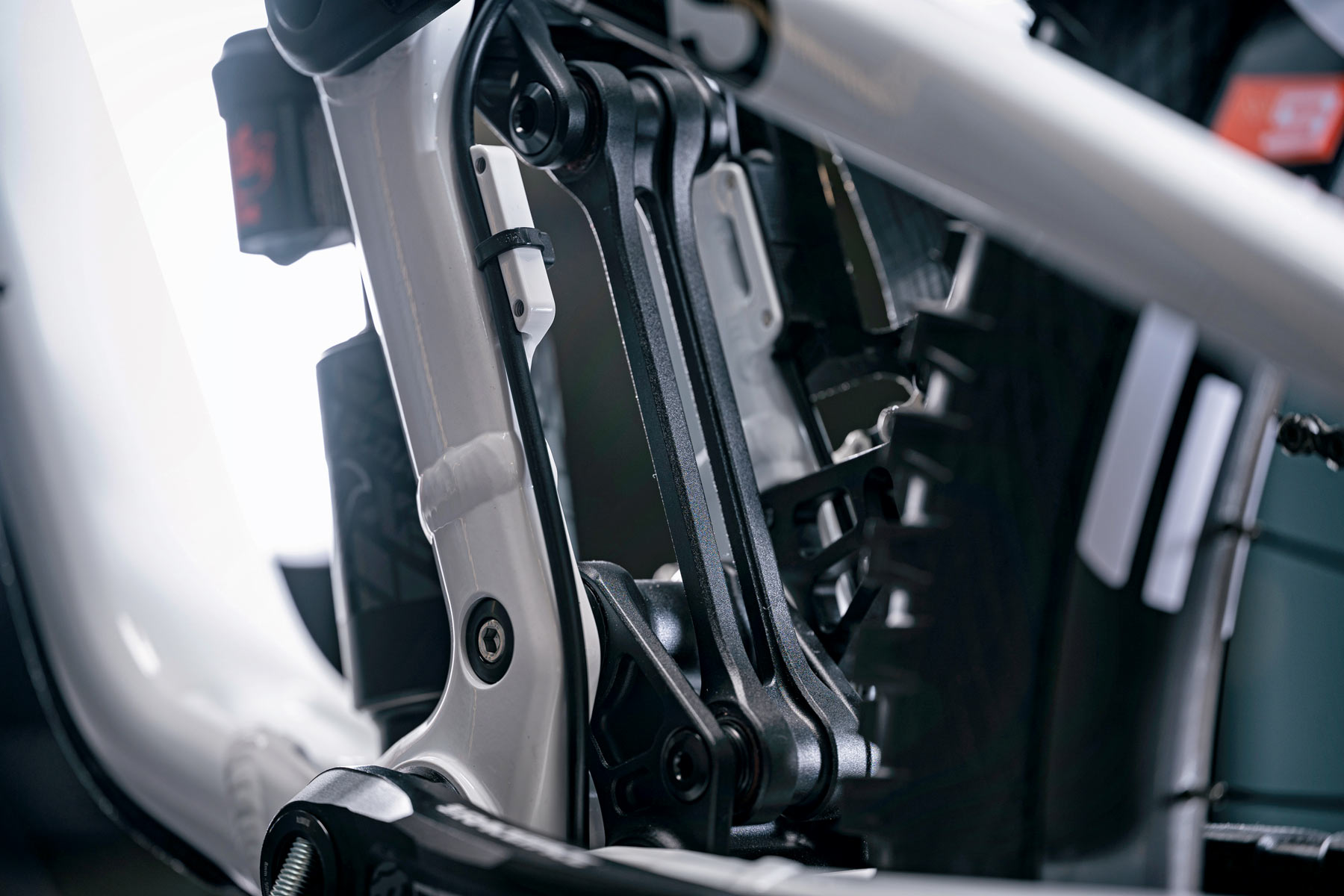 Two separate links actuate the shock, in a complicated layout that we’d love to have an animation of to truly comprehend. It is a 6-bar suspension layout with plenty of forged links inside that gives the bike the ‘virtual’ pivot point. 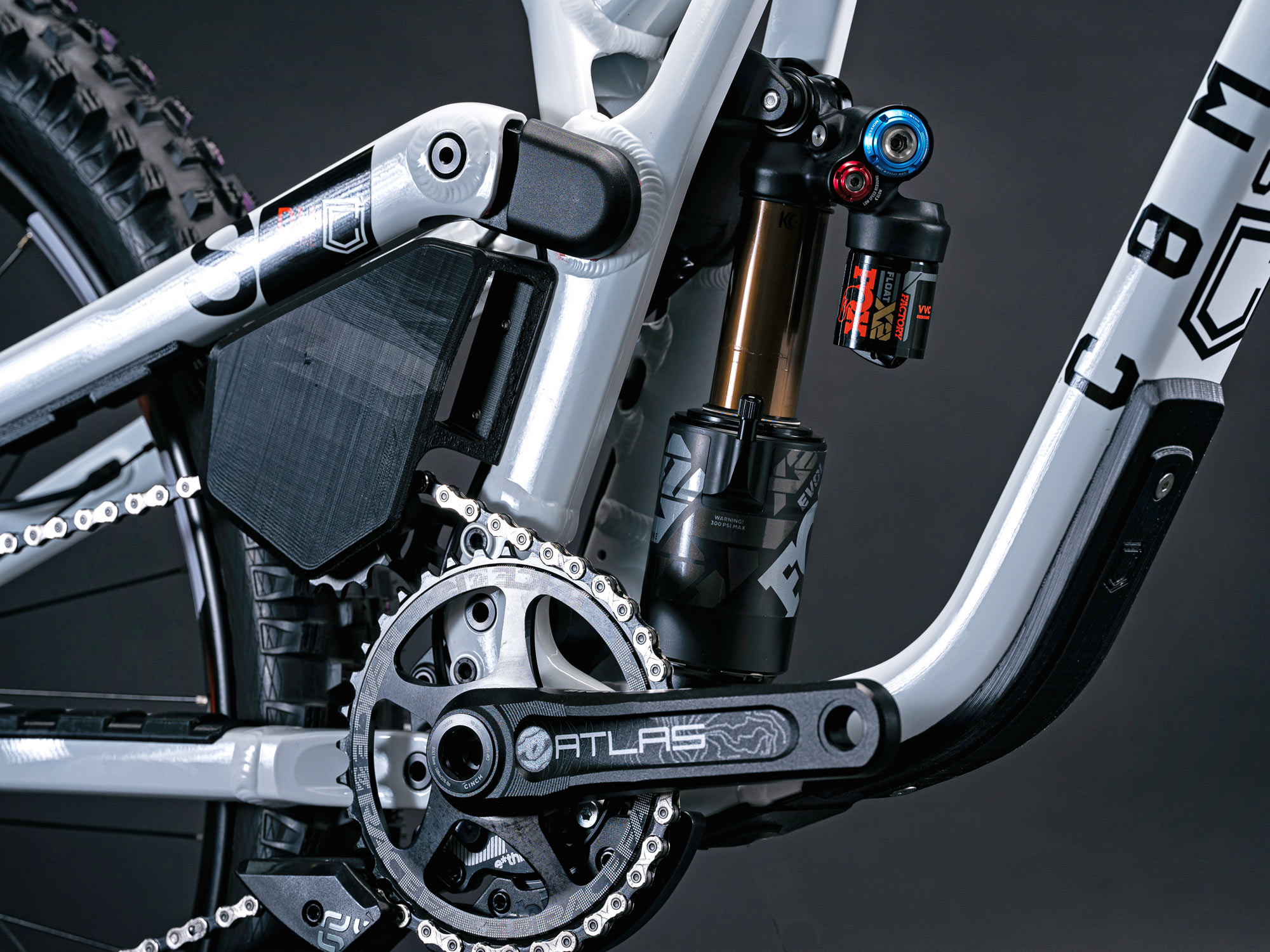 It is a high pivot, and will get an idler pulley to isolate suspension movement from the chain. This obviously pre-production bike gets a huge 3D-printed shroud over the pulley, although a similar plastic/composite guard will probably make it to production. 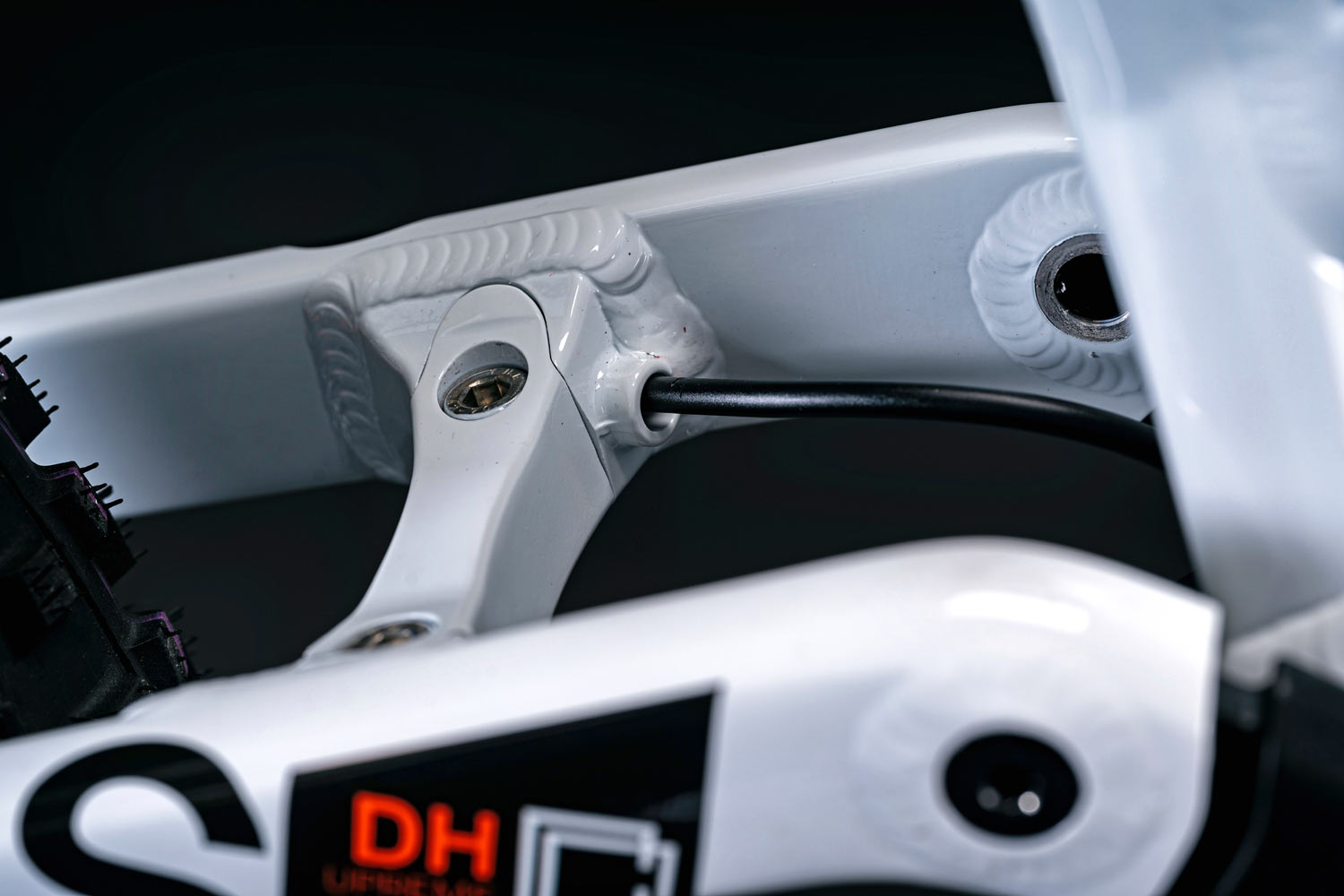 The seatstay bridge that was previously hidden, now reveals that it is semi-removable and includes rear brake routing. We’re still not entirely sure what to make of that. Hopefully it will have something to do with an integrated fender to protect all of this linkages & pivots from every bit of mud thrown off the rear tire! 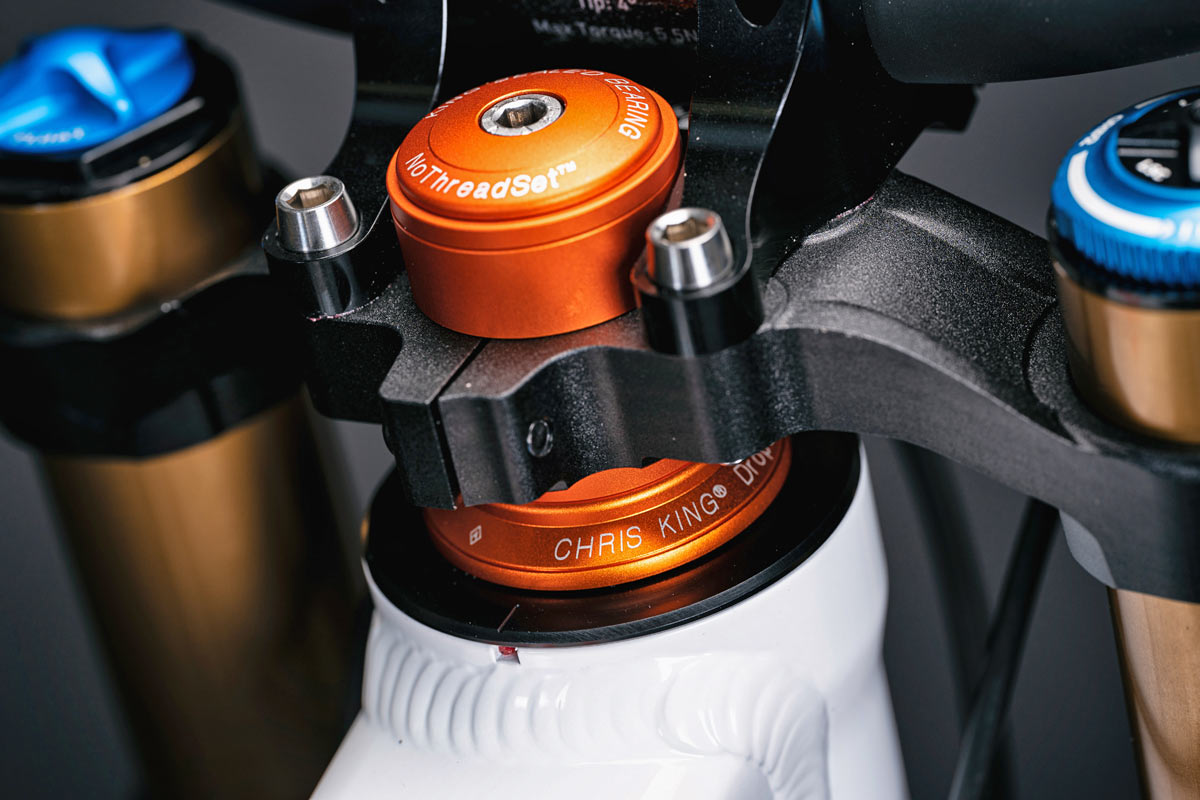 The new bike will feature an adjustable insert under a more conventional Chris King headset, likely giving the team frame head angle or even Reach adjustment. 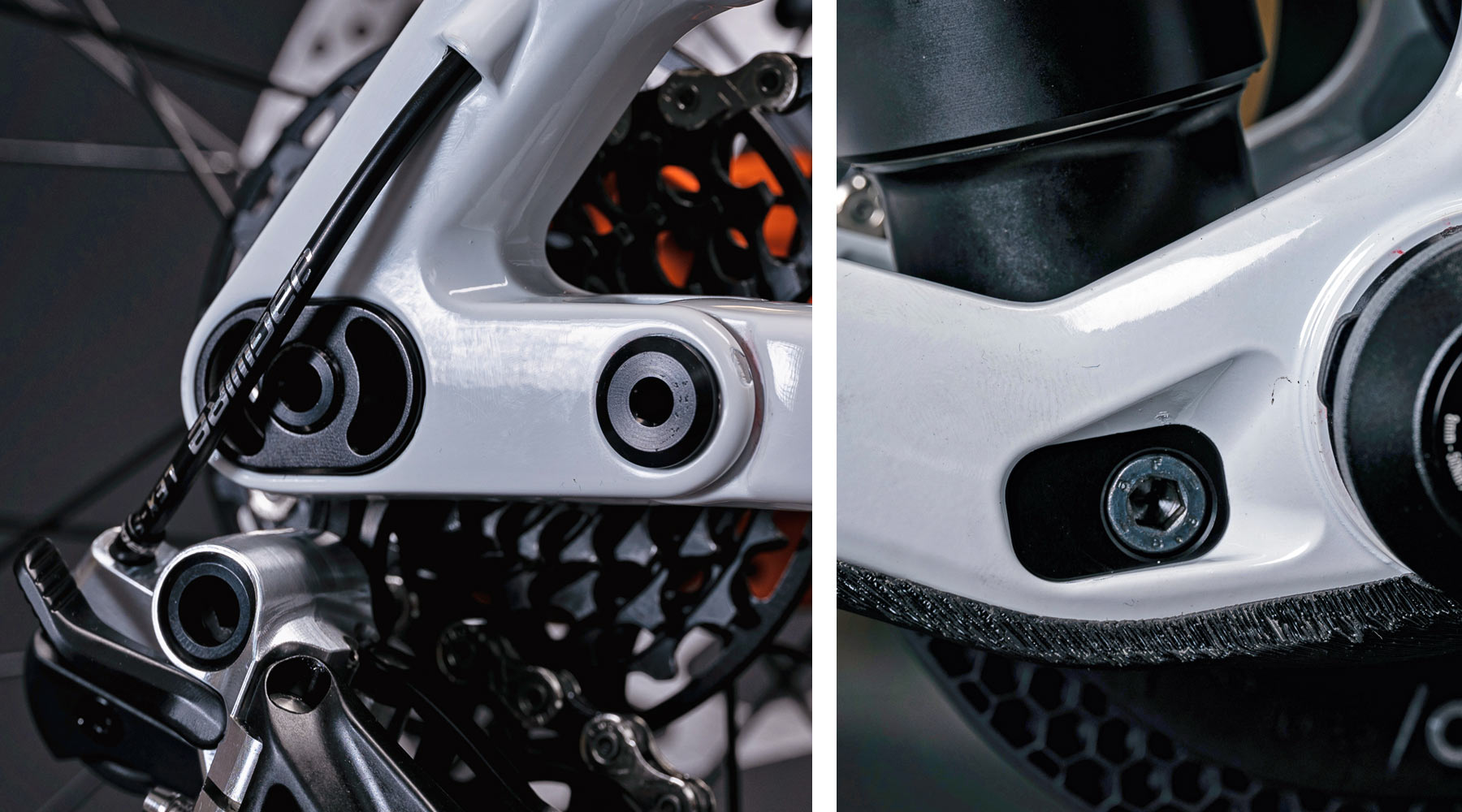 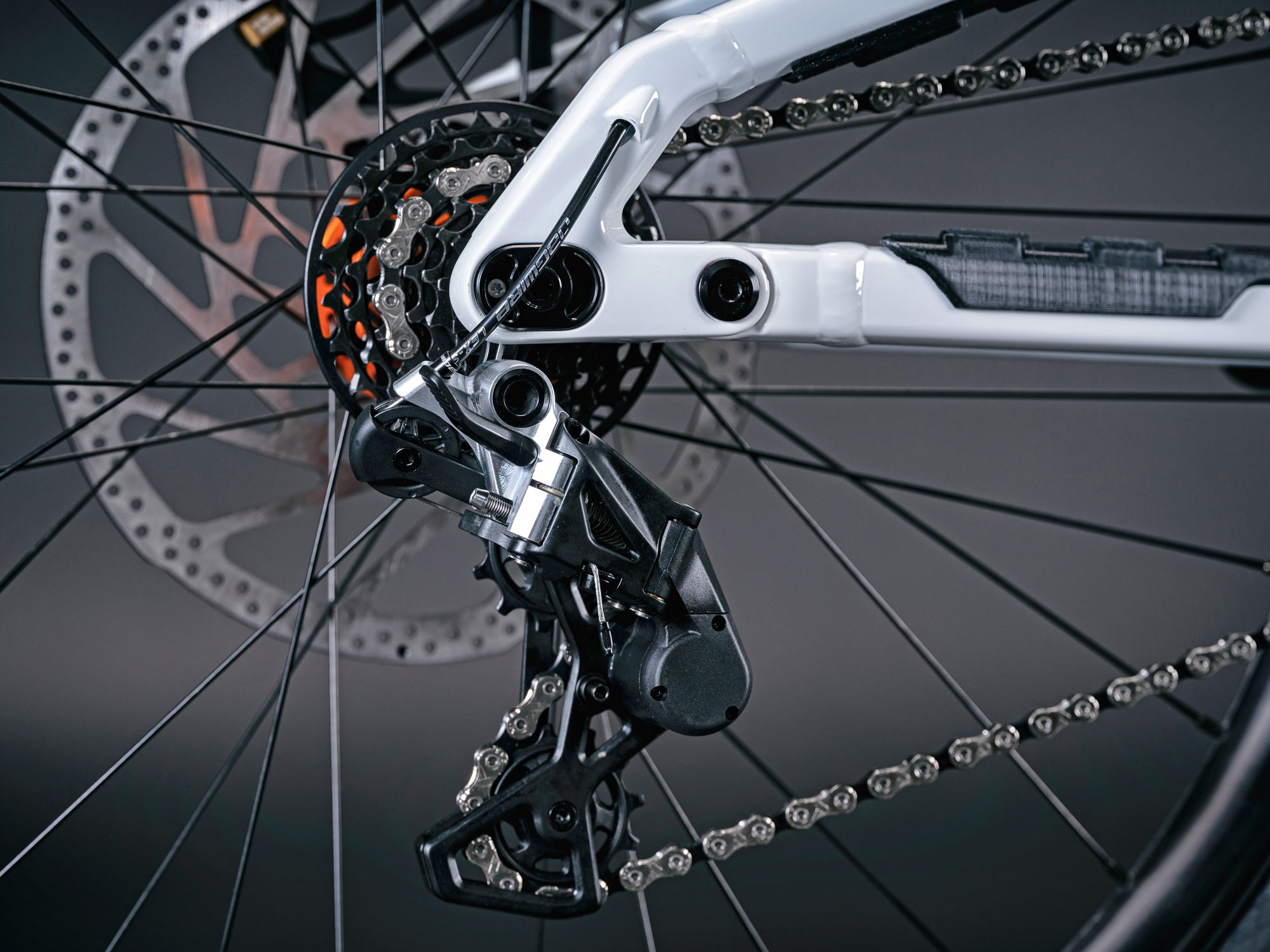 Notice anything unique about that unlabeled rear derailleur? It looks like an even more-refined prototype of the next-generation TRP TR12/TR7 rear derailleur we’ve been spotting every once in a while. 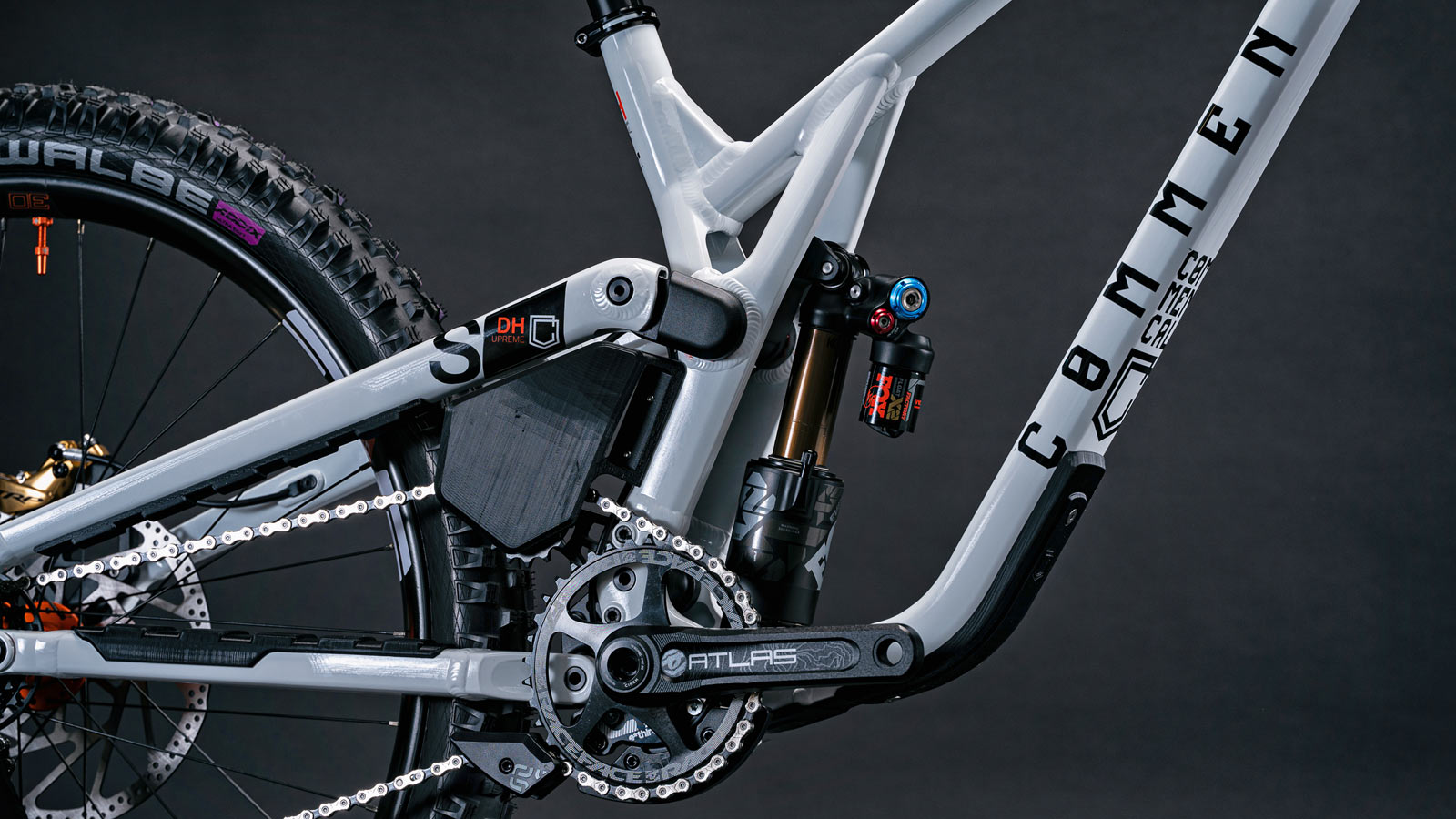 On top of all that, there will be integrated downtube, chainstay & seatstay protectors, which should keep the alloy bike running as quietly as possible. 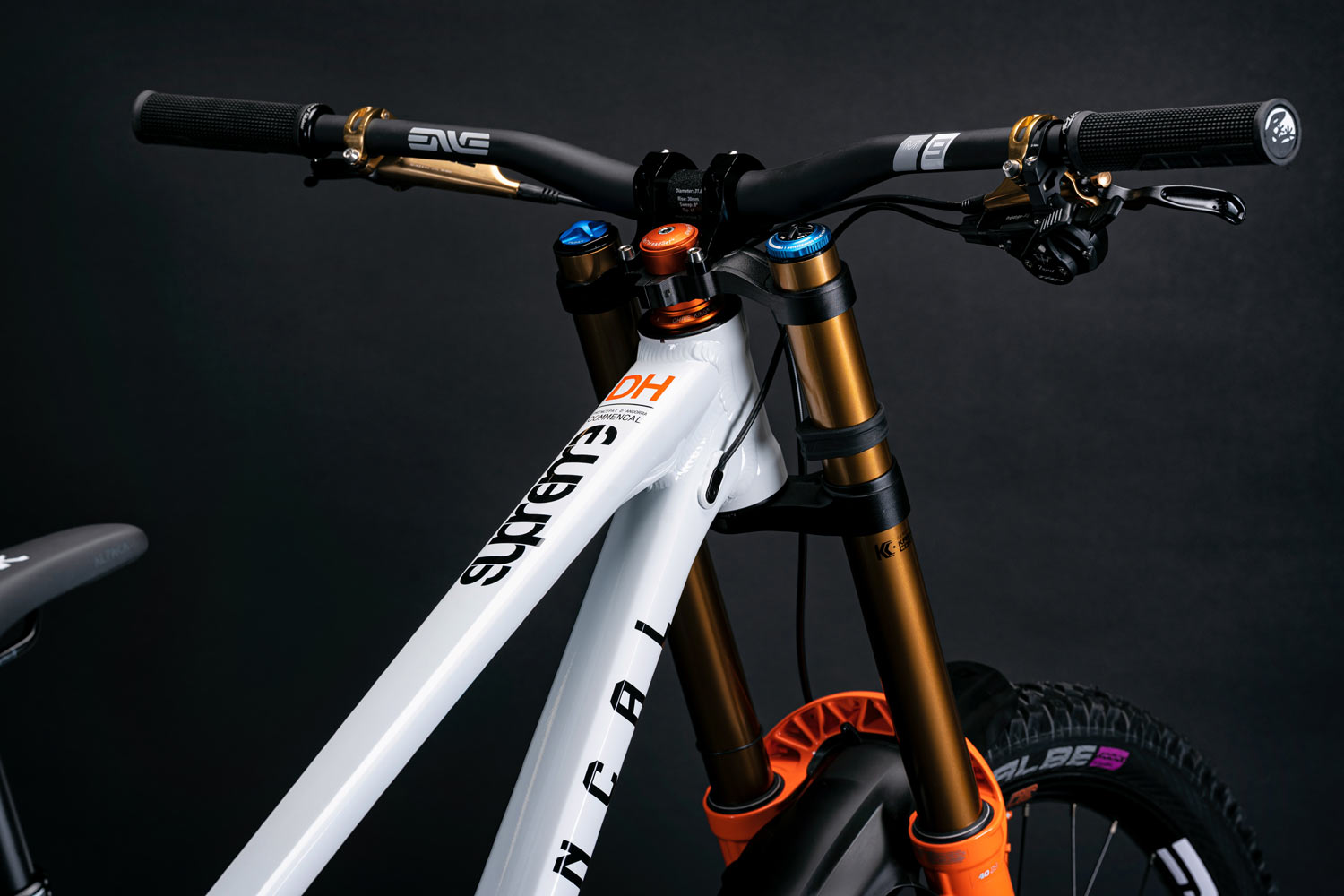 “The terms were simple… To make a bike with no compromises, which works very well whatever the type of track and which gives the rider confidence. Alongside the evolution of the discipline itself, we could see that the time when you could make a strategic choice on the settings of the bike at the start of the season is over.” 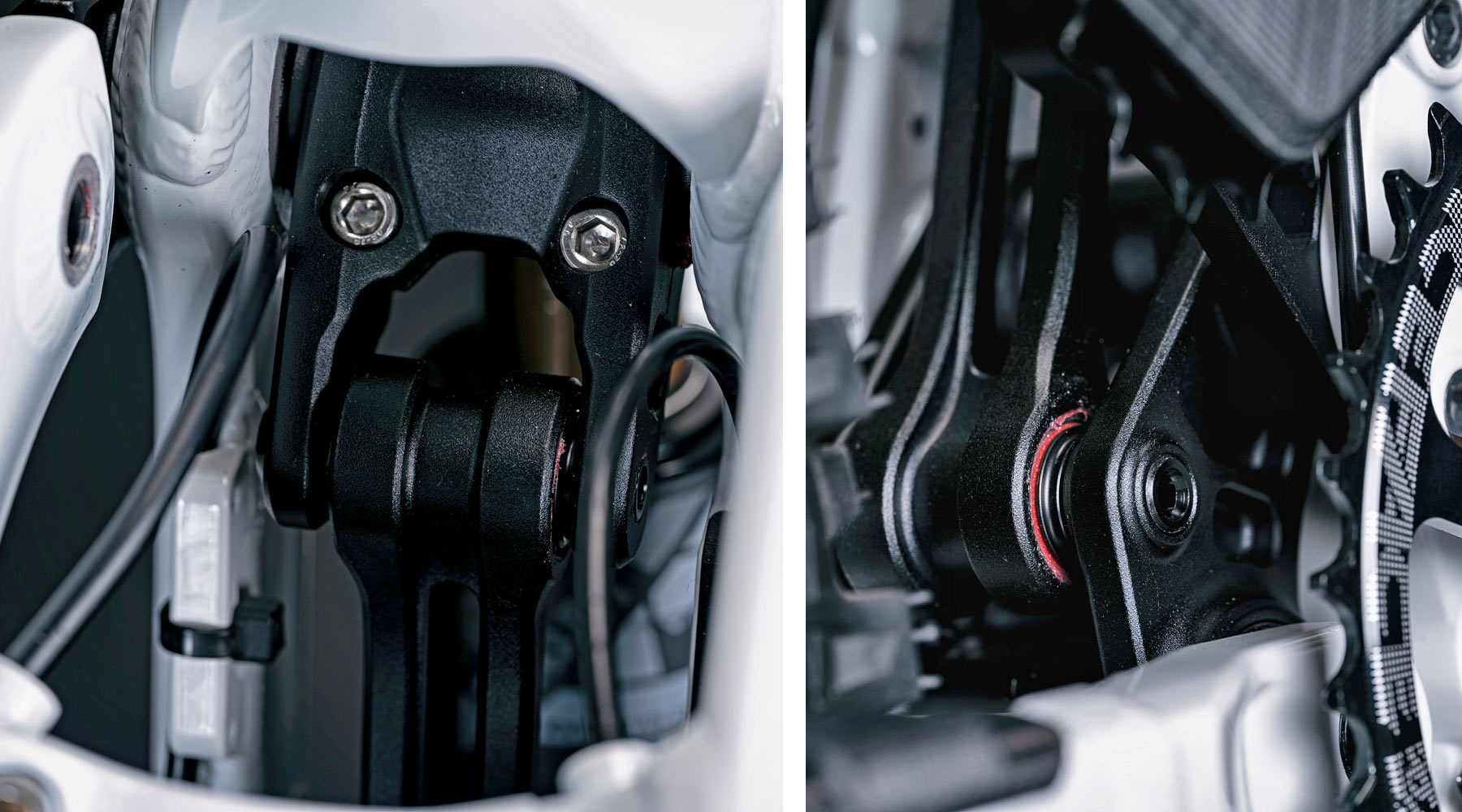 “For example, making it very efficient, or very comfortable. Race tracks are complete and varied, and it takes versatility. Additionally, the level is so high that riders have to spend a lot of time working on their lines on track and they have less time to think about bike settings.” 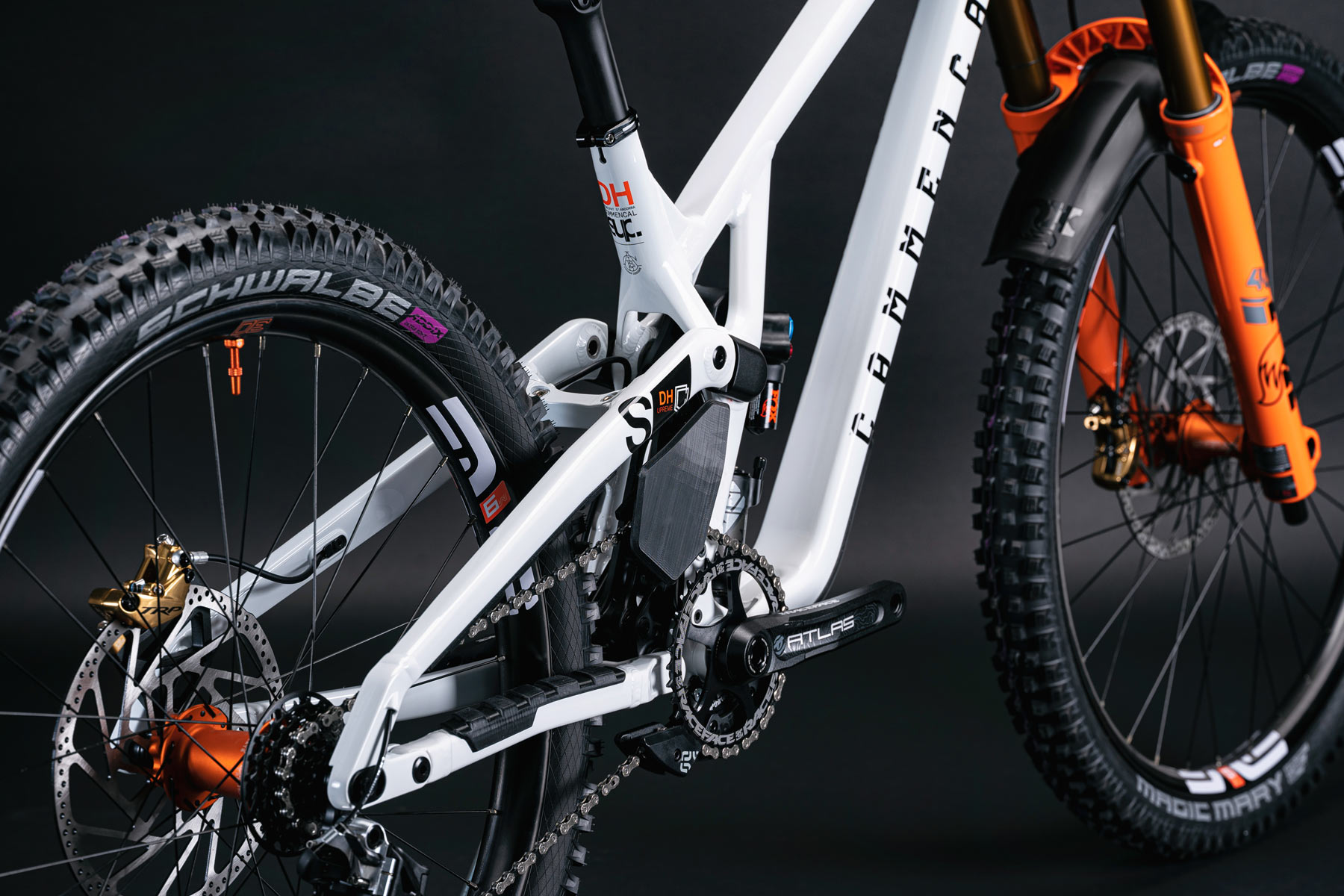 “In the technical sense, we chose to work on the ‘virtual high pivot point’ kinematics. Using a 6 bar system allows us to create an ideally controlled virtual pivot point trajectory and suspension leverage ratio evolution, regardless of the range of travel used. The result is a significant improvement in the balance, shock absorption and overall liveliness of the bike. That was the goal and that’s what we’ve got!” -Arthur Quet 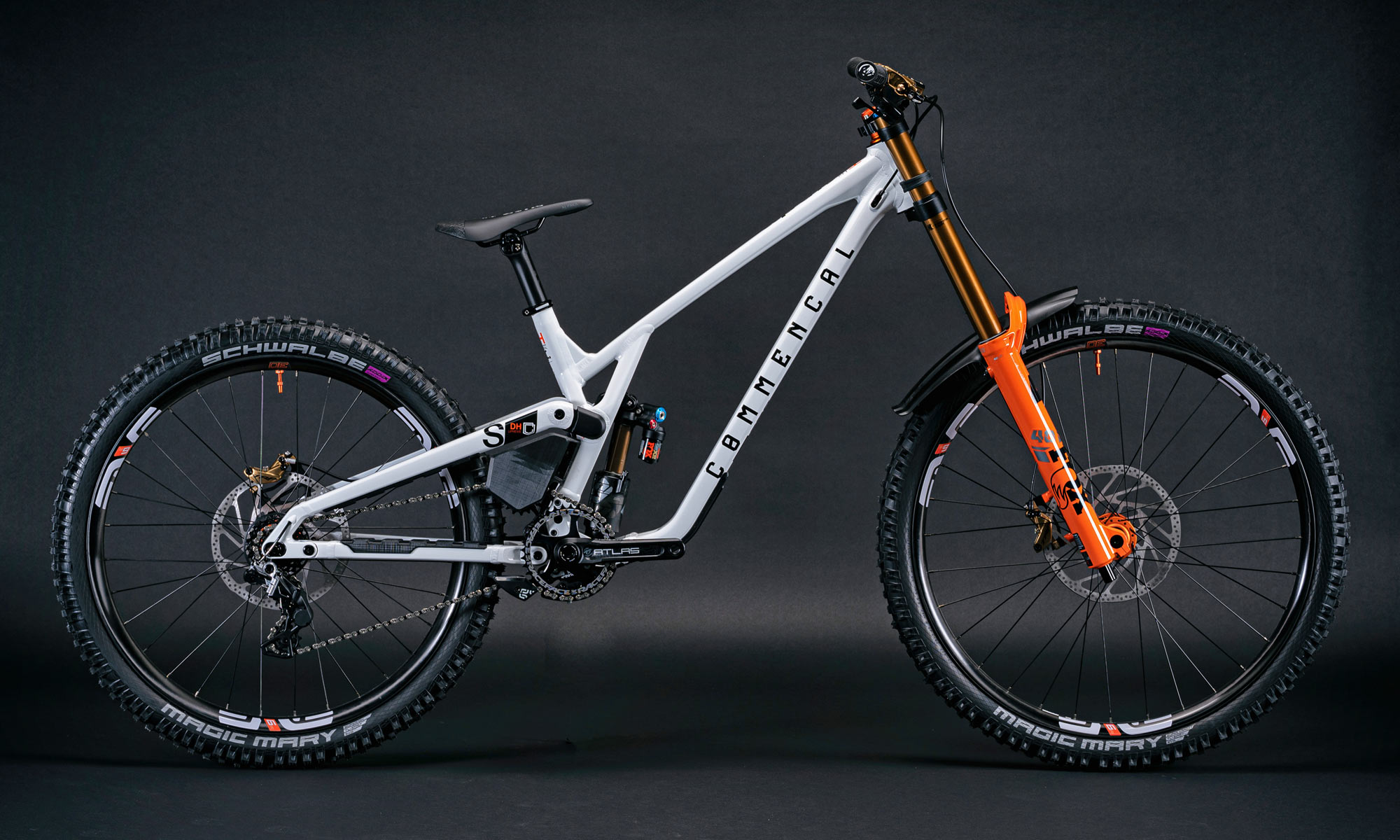 Here’s the rub… The new downhill bike isn’t exactly as ‘coming soon’ as we all might hope.

Commencal says frames and their À La Carte online customizer builds should be available at the end of 2022. Complete bikes will take even longer, estimated delivery in the “beginning of 2023”.

So I guess you have another season to dial in your lines and try to earn your way into the bigger DH races.

Not satisfied with still having to wait… why don’t you buckle up for more than an hour following Amaury Pierron, Myriam Nicole, Thibaut Daprela, Thomas Estaque & Hugo Frixtalon as they race the full 2021 DH season – with plenty of time on the new bike.