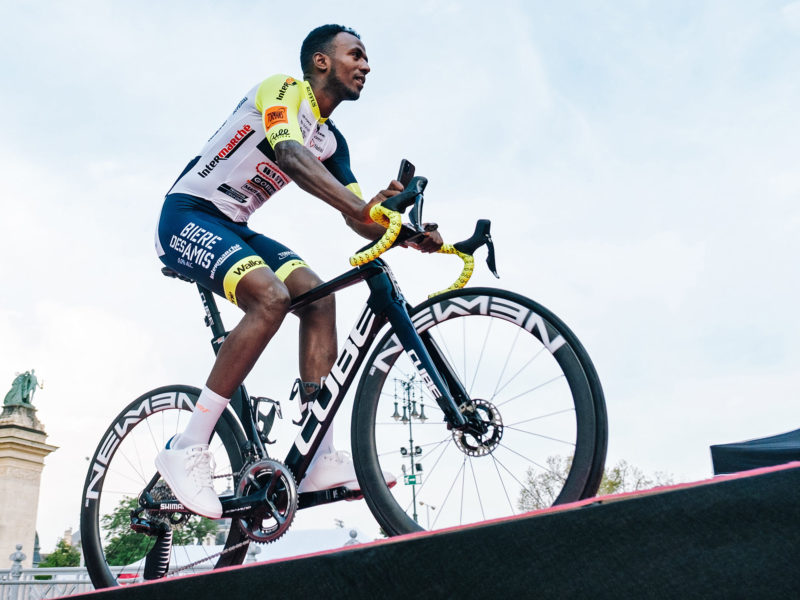 We got an up-close look at the CUBE road bikes of Intermarché-Wanty-Gobert’s Biniam Girmay(e) earlier this week from the Giro d’Italia as they gave us a first detailed look at a prototype CeramicSpeed Aero OSPW derailleur upgrade. But we wanted to dive more deeply into the bikes themselves, so we reached out to Girmay’s team and sponsors for a full Pro Bike Check… 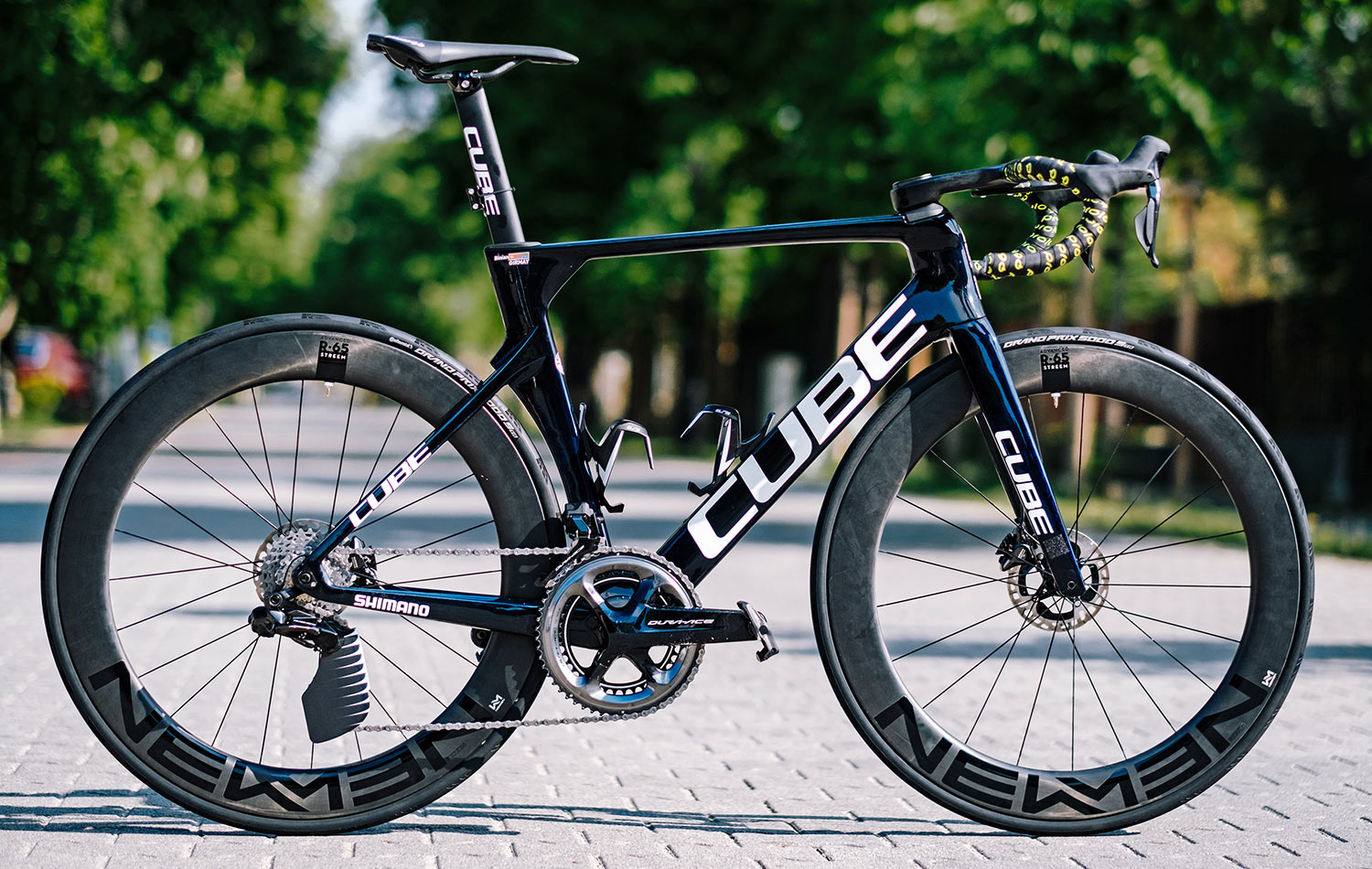 The CUBE Litening C:68X of the Intermarché-Wanty-Gobert team at the 2022 Giro d’Italia is the same integrated aero road bike we got an early look at almost three years ago now. Developed by the German bike maker, specifically to give the then Wanty Group team a versatile race bike, it has much of the sleek aerodynamic tech we see in newer bikes now, yet is still surprisingly affordable relatively speaking.

When it launched, a complete build with Dura-Ace Di2 & deep DT ARC aero carbon wheels sold for just 6500€. Compare that to more than 10k€ for many of the bikes in the pro peloton. 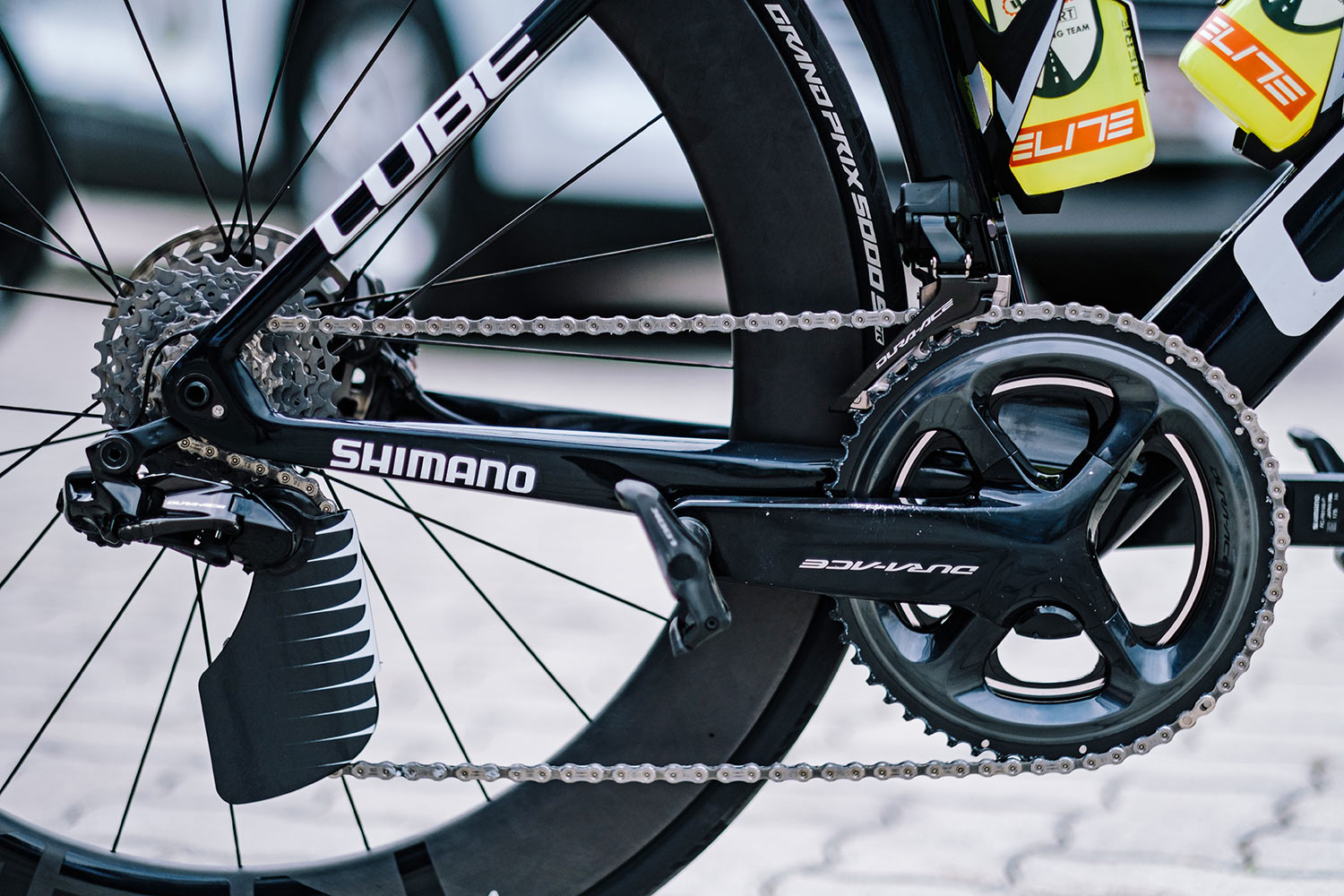 This prototype CeramicSpeed Aero OSPW derailleur pulley cage upgrade was what first caught our eyes, after Eritrean pro rider Biniam Girmay Hailu went head-to-head with Mathieu van der Poel in the Stage 1 sprint of the Giro, his first-ever Grand Tour. (Somewhat confusingly to me at least, official results & his team also refer to him as Girmay, without the extra E he adds to his name.)

Update: A couple of weeks later, Girmay beat van der Poel in the head-to-head sprint for the Stage 10 win, with MvdP conceding with a thumbs upwith a thumbs up once he realized he just couldn’t catch Girmay. In a surely wild rollercoaster of fortunes & emotions, Girmay was accidentally struck in the eye by his own champagne cork at the podium celebration, needing medical attention and forced to withdraw from the race after becoming the first-ever Black African to win a Grand Tour stage. Wild. 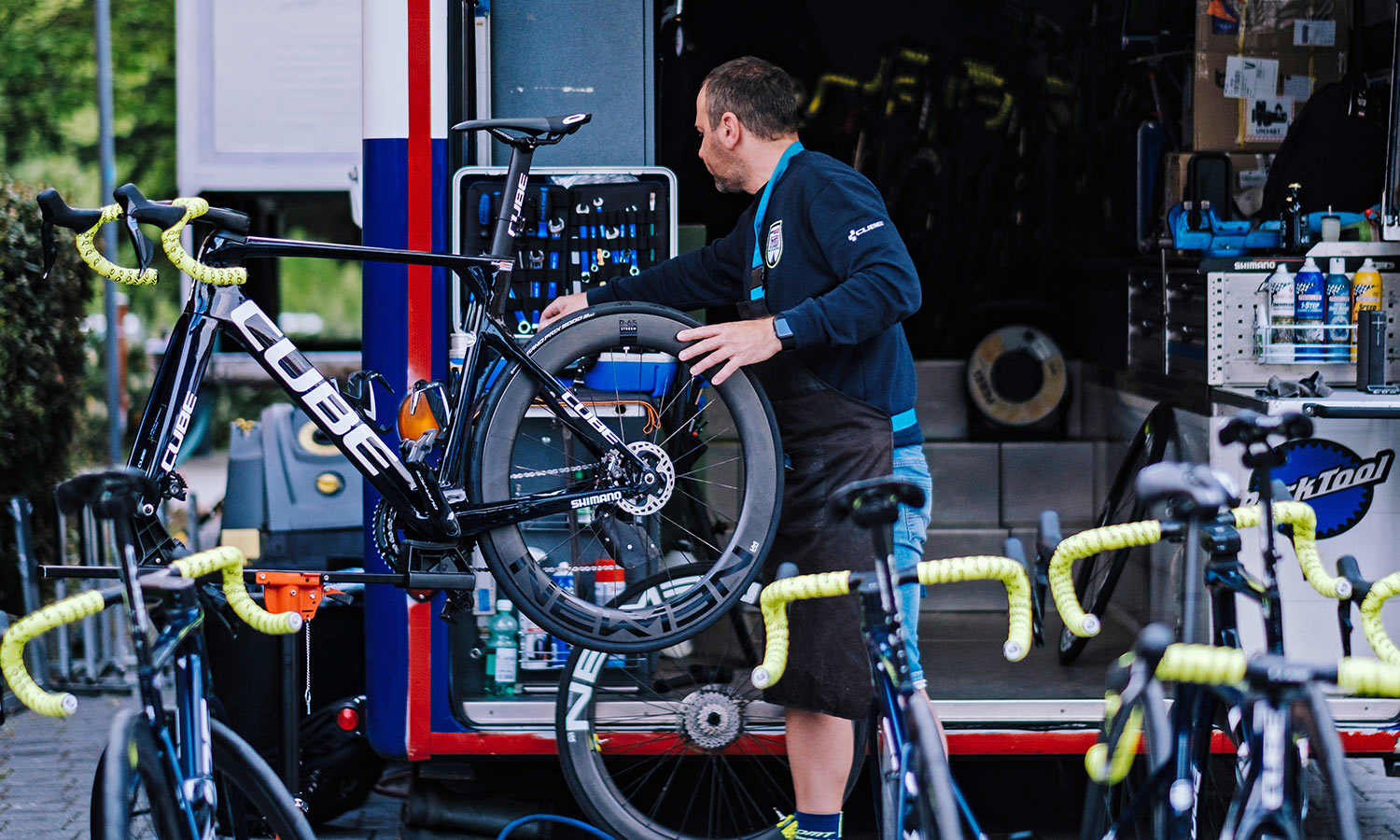 Girmaye’s Cube Litening is built up with a full new Shimano Dura-Ace Di2 groupset with the new 140mm rotors, but sticks with the previous generation integrated powermeter cranks. 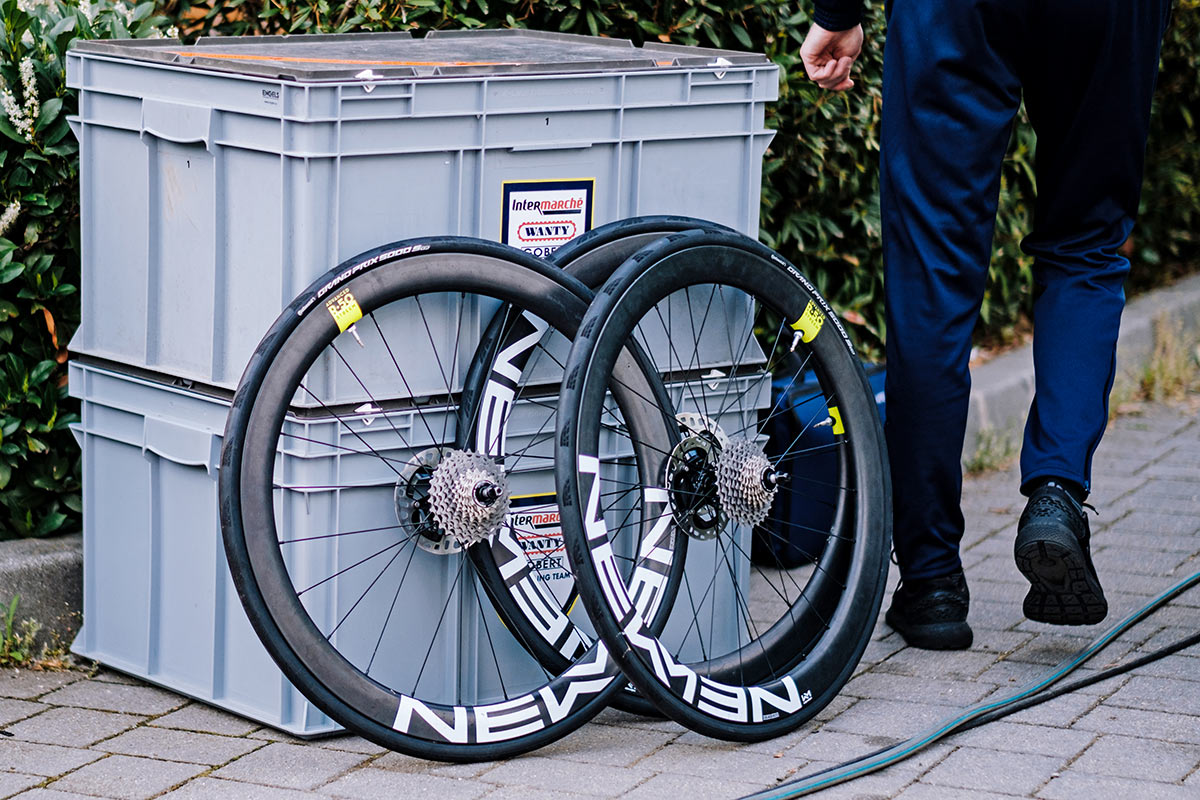 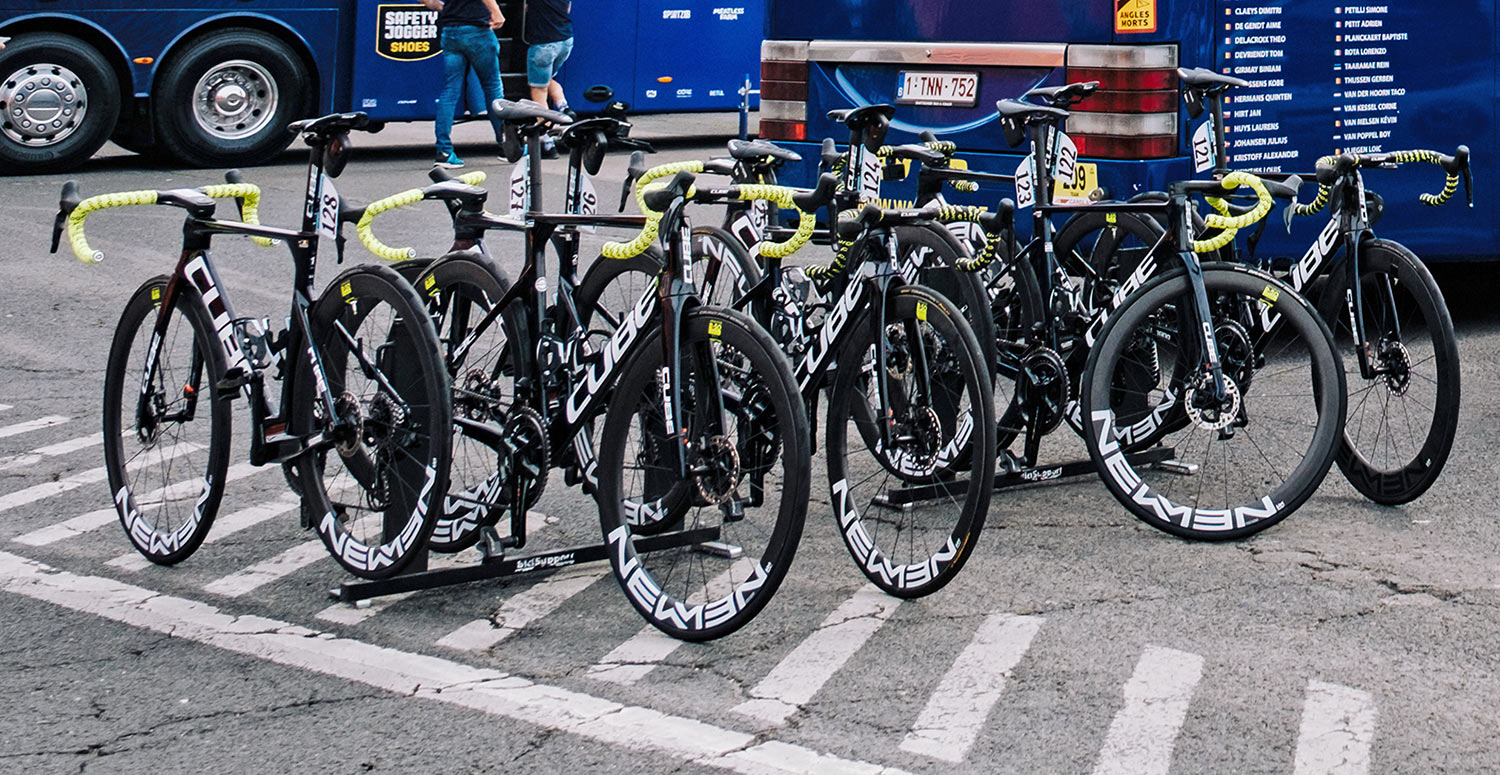 But the easiest way to pick out Girmaye’s bike is always the stealth black logos on the lightly deeper Newmen Streem Advanced SL R.65 wheels. 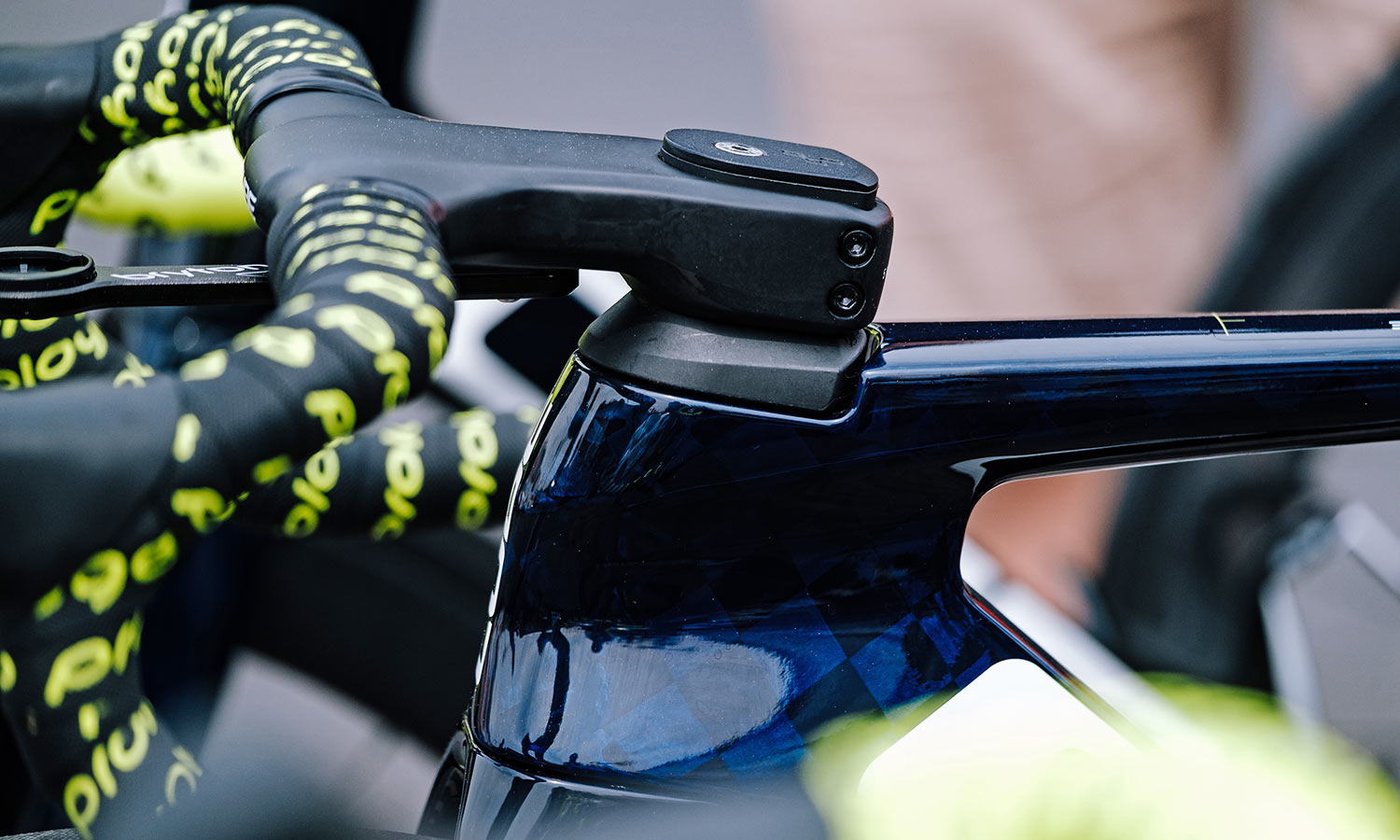 The team bikes are all fitted with Cube’s own one-piece carbon bar+stem cockpit with fully internal cable routing, and a direct out-front mount for their Bryton GPS computers.

The Intermarché-Wanty-Gobert Cube Litenings almost look black, but in the right light you can see they are a special TE team edition with a translucent blue finish that reveals the C:68X carbon layup underneath. 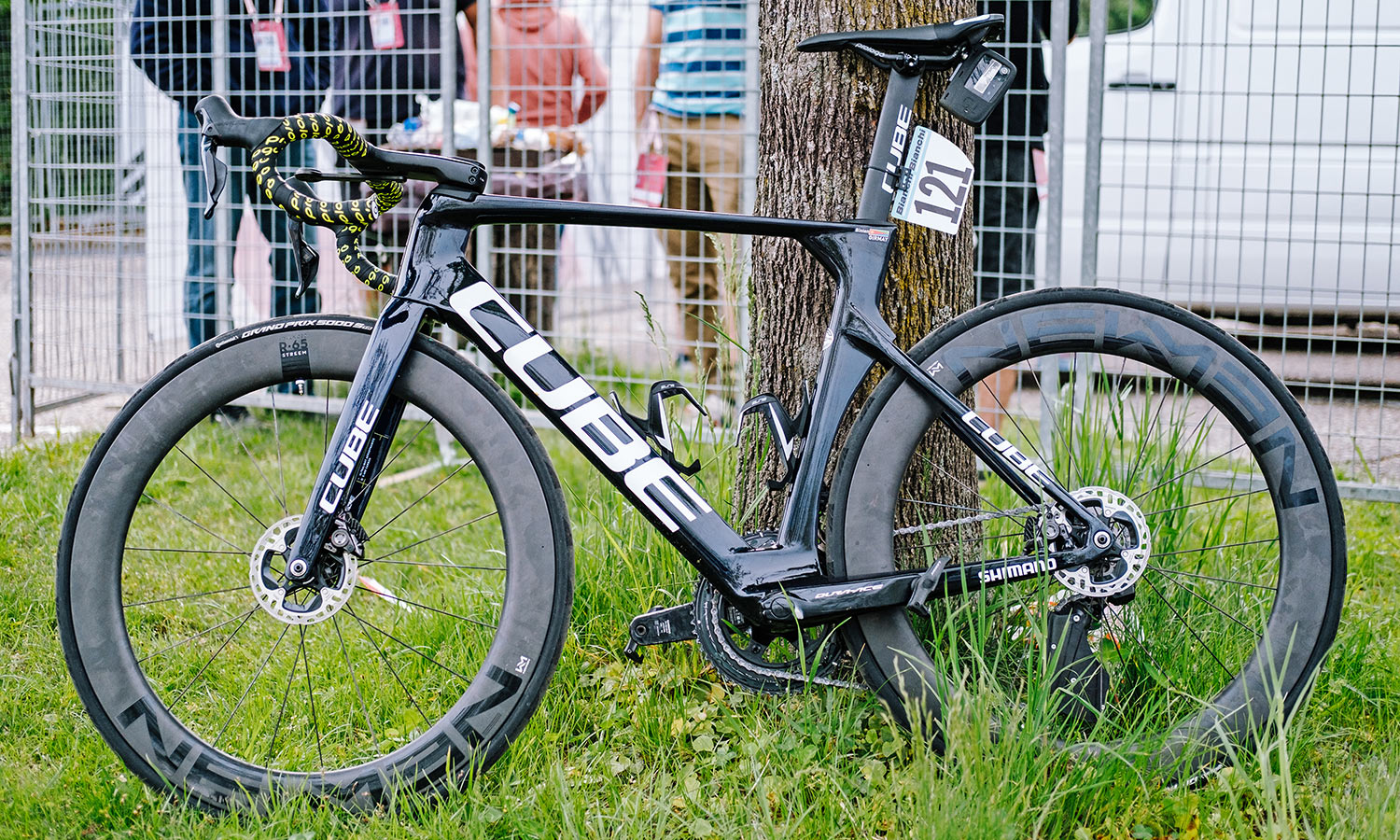 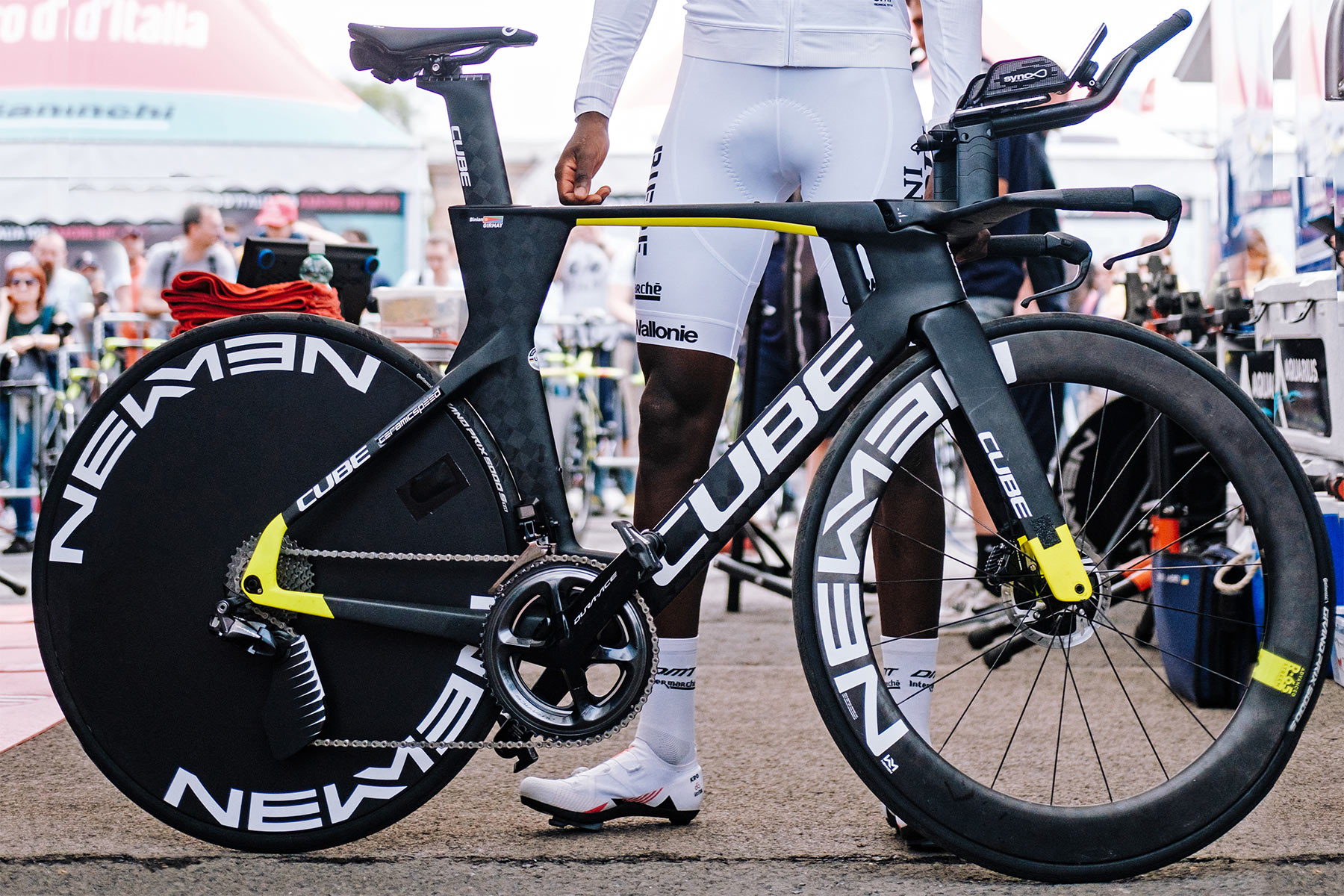 After earning the white Maglia Bianca jersey behind MvdP in pink, Girmaye raced the Stage 2 time trial on his CUBE Aerium TT C:68. Another bike that has been in the Cube lineup for several years, Girmaye’s bike is still running the previous generation 11-speed Dura-Ace Di2.

A fun bit of super-pro mechanic trivia: The front wheel of Girmaye’s TT bike doesn’t have a visible external valve stem, as his mechanics installed a Schrader tubeless valve inside the inner section of the deep carbon rim, then use a Schrader-Presta adapter with a valve extender to adjust tire pressure, removing it for racing to improve aerodynamics. #sopro 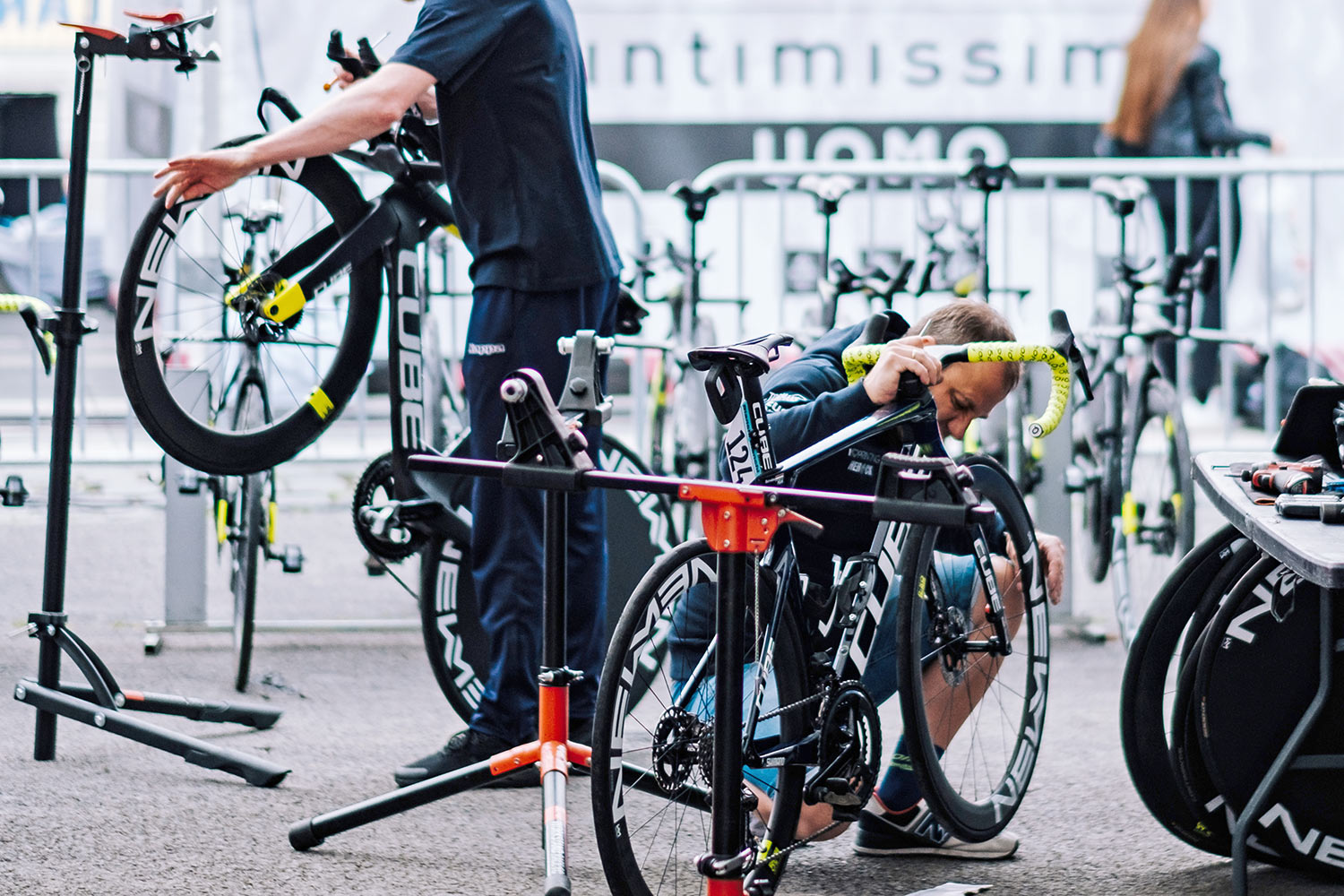 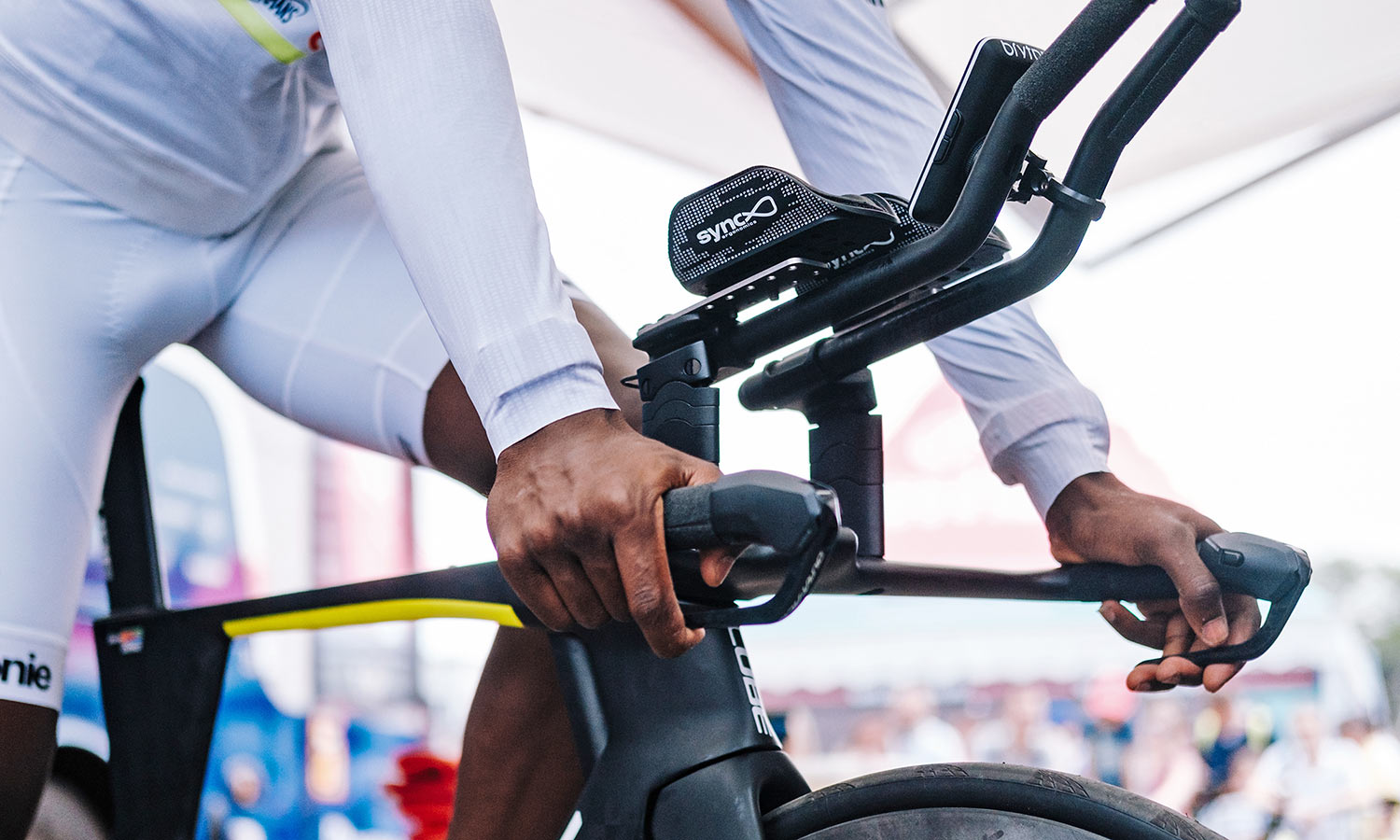 One truly unique bit of kit is his customized Sync Ergonomics aerobar setup. His position on the bike appears quite high with a healthy stack of spacers under his extensions, but with a very far forward set of arm rests. 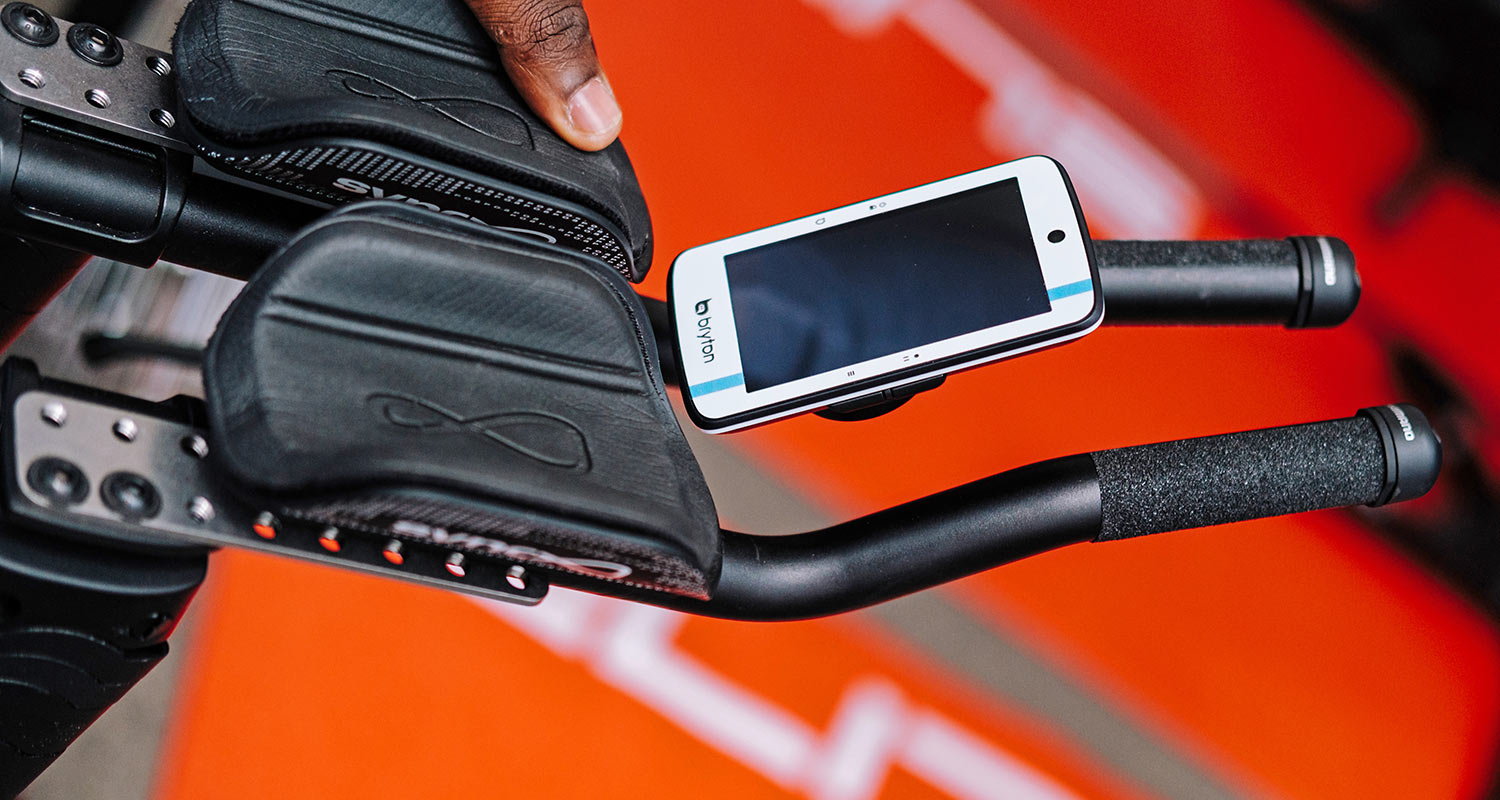 The Sync Project 0.2 cockpit angles up a set of S-bend extensions, but moves the forearm supports further forward using a set of custom fabricated mounting brackets.

Simple grip gives him something to hang onto, and a custom-finished version of the new Bryton S800 cycling computer collects and displays all the data he could want. It’s even voice-activated. 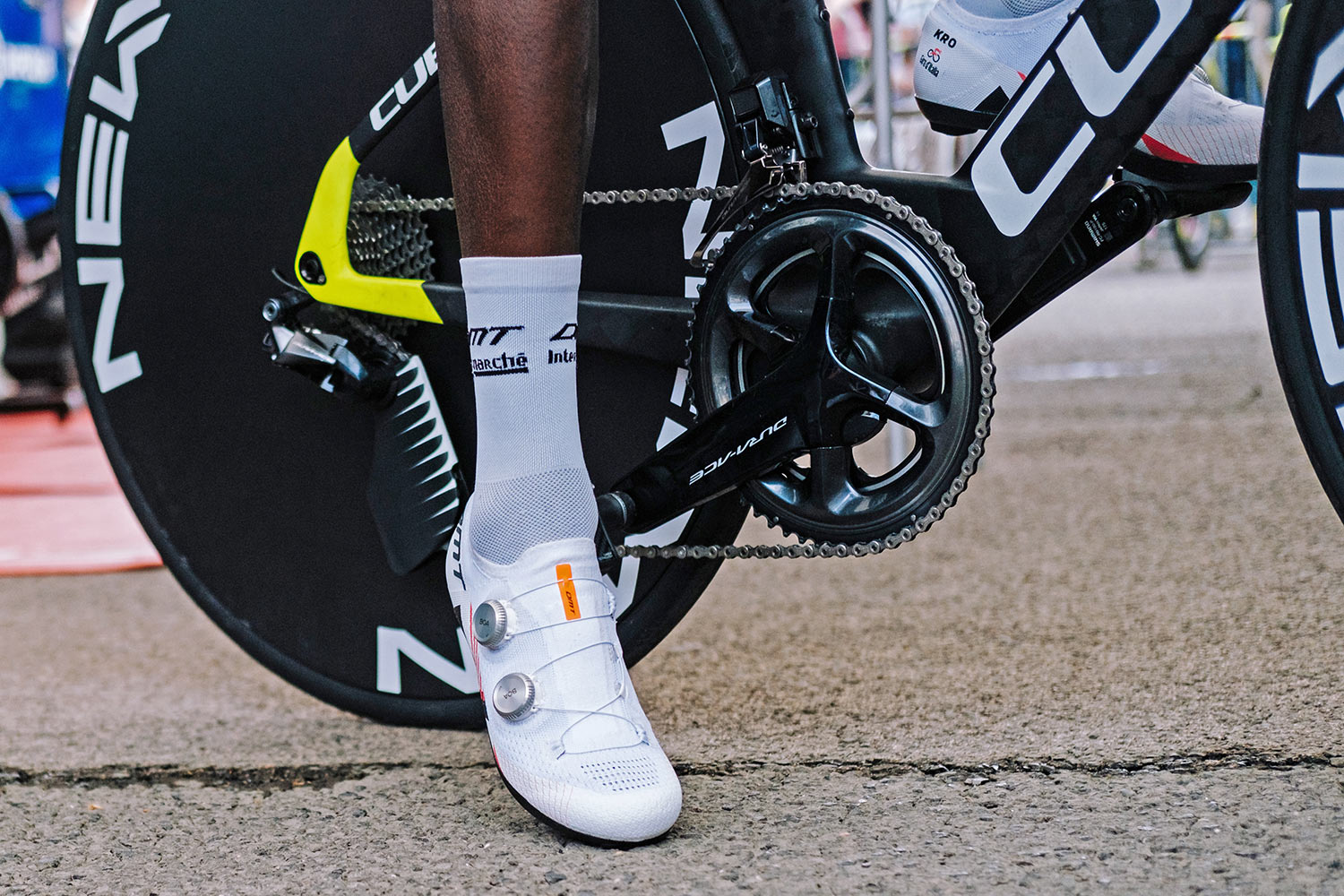 The TT bike also gets the prototype CeramicSpeed Aero OSPW derailleur upgrade, as every second counts for the rider in a classification jersey. 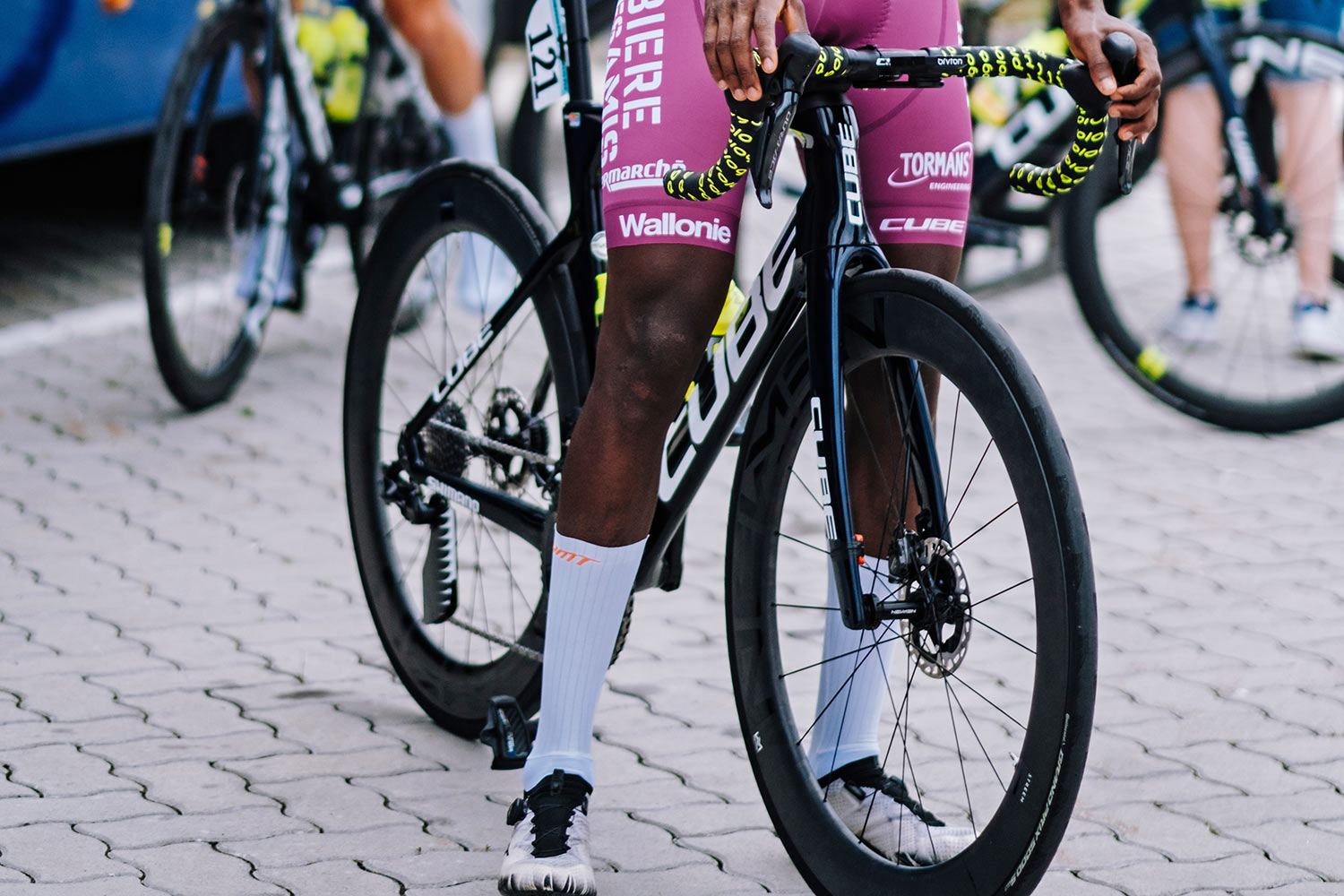 Girmaye generally still races in DMT’s previous generation tech knit KR1 shoes with a single Boa, but for the TT it looks like he broke out a set of the newer 2-Boa knit KR0 shoes covered of course with a set of aero shoecovers for those extra #freewatts! 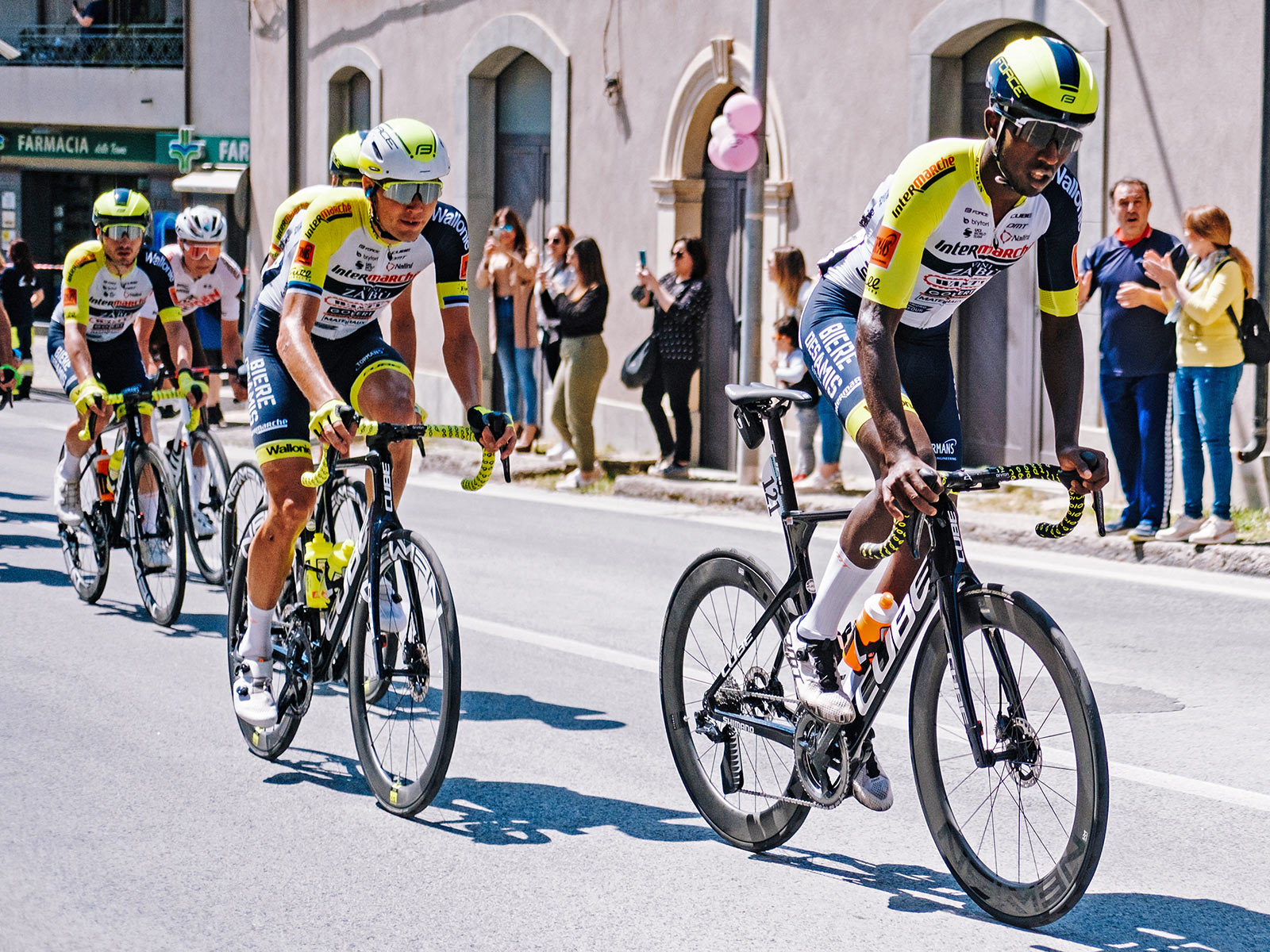 Biniam Girmaye had another good day today, getting in the Stage 5 sprint and coming out just off the podium. But for now he’s back to his regular team kit, although that might not last forever. After earning more spring points again, he back in the 2nd position for the mauve Maglia Ciclamino again after today. (He was just a few points of the Sprint Classification  lead when he had to abandon after his Stage 10 victory.)

His name is Ghirmay and not Ghirmay”e”. I don’t know where did you got that.

Just for your information, in Eritrea / Tigrinya the name sounded and spelled exactly as it is written.

He ever in Ethiopia/ Amharic they add an “e” and write it and sound with an “e”.

I am writing this, in case you are wondering why some write “Ghirmaye” instead of Ghirmay.