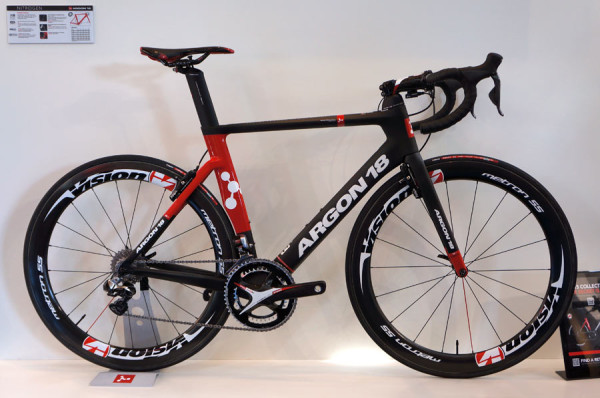 Argon 18 has been rather busy, bringing about new bikes for all the hot pavement categories -adventure road, aero road and triathlon- and equipping them with some new components from TRP and, from the looks of it, Shimano.

The biggest news is the all-new Nitrogen aero road bike, which incorporates all-new TRP linear pull road brakes. The frame utilizes many of their existing technologies and designs, including their HDS (Horizontal Dual System), which slices an imaginary line from the top of the head tube back to the rear dropout. Everything below that line is stiff and oversized, above it things are thinner and more compliant. The idea, now common, is to enhance power transfer without sacrificing comfort.

It also uses their progressive sizing and integrated head tube spacers, albeit with an aero shape, to accommodate a wider variety of rider shapes and sizes. The bottom bracket gets a 75mm drop to put the rider’s center of gravity low and keeps the head tube height low for a stiffer front end and snappy handling. It’s all assembled with a 7003 HM nano-tech carbon, which brings the medium painted frame weight to just 960g. Hardware (+60g) and Di2 bits (+23g) add a little more. Fork weight is claimed at 366g when cut to fit a size medium frame.

UPDATED…with the real deal on that “new” Shimano Di2. 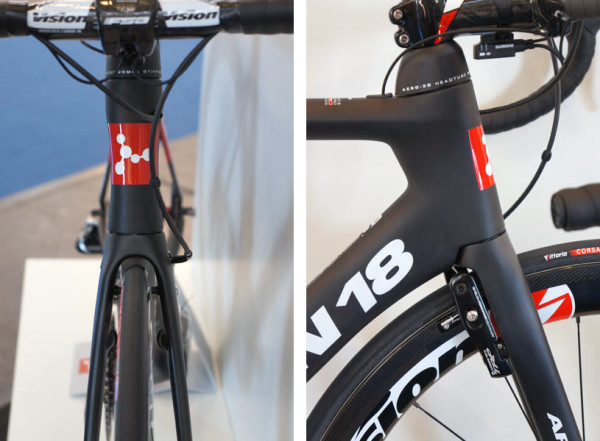 Slender headtube and fork legs slice through the air and trailing edges reduce turbulence. Their 3D pressfit head tube extenders provide extra height without giving up stiffness. On most of their bikes, they’re much rounder, but here they get a tear drop shape. 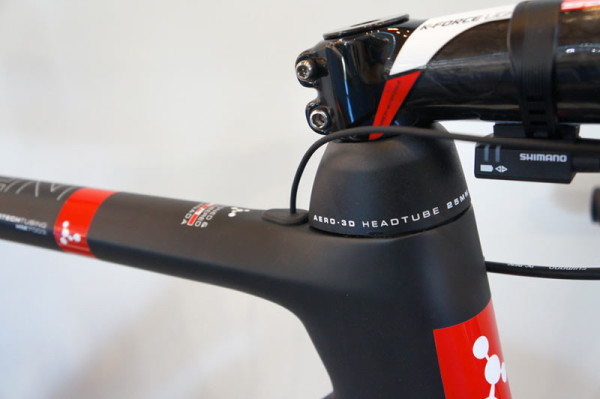 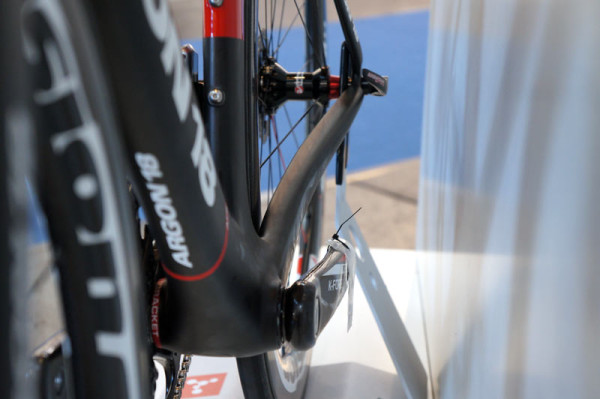 Down below, the huge bottom bracket surrounds a PF86 shell and mates to asymmetric, oversized chainstays. 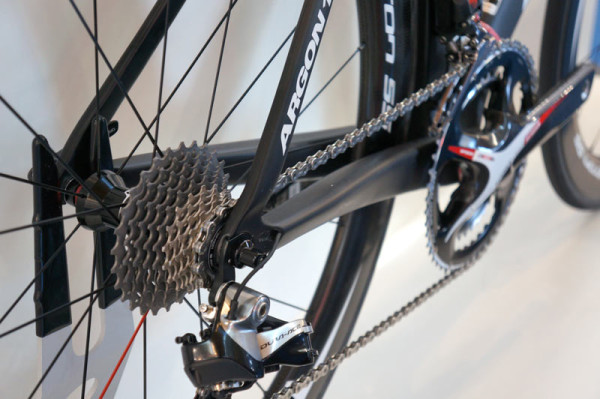 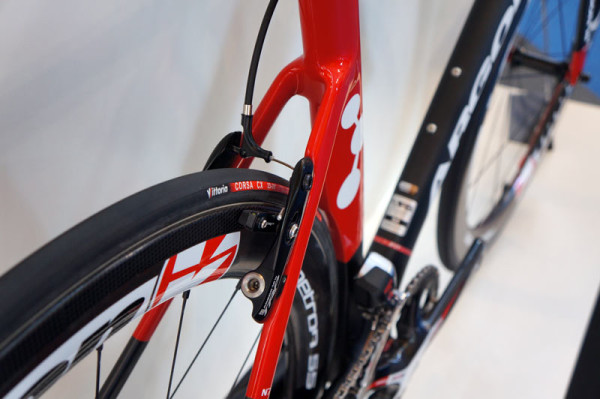 Argon 18 codeveloped these new direct mount linear pull brakes with TRP, but they’ll be available to any manufacturer. 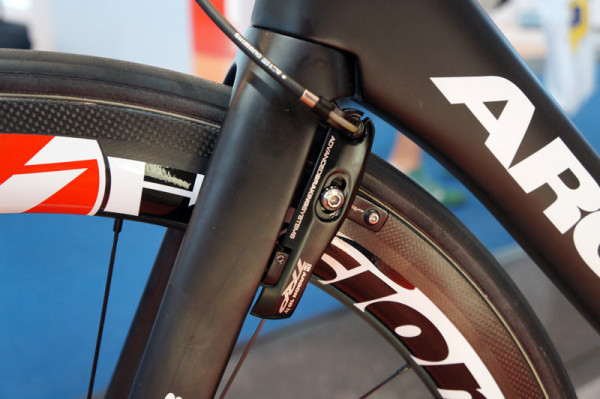 Dubbed TTV Road, they get improved pad clearance over the original TTVs, which were designed for TT/Triathlon bikes. They also get linear springs rather than a coil spring and a two position cable noodle. 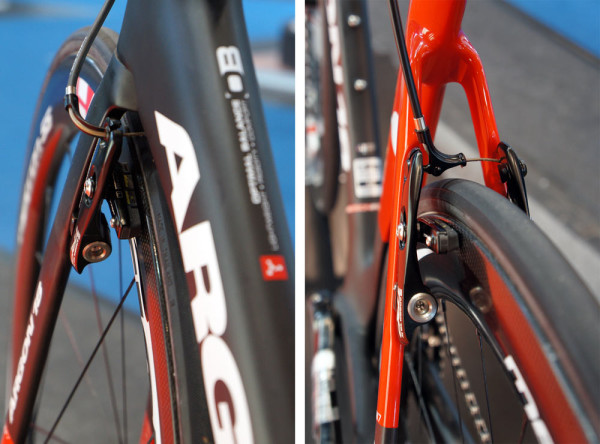 The noodles can be placed inside or outside the arm, allowing for more fit options. Other features include oversized 11mm diameter pivots with bushings and adjustable brake pad position. TRP says they can’t be retrofitted to any bike, the frame must be made with these in mind, but the updates and improvements found here will migrate to the TTV soon.

Click to enlarge. The bike includes their flippable seatpost and saddle cradle, allowing for a -15 or -25mm setback per position and an effective 72º or 76.5º seat angle. Add aero extensions to the handlebar and you could substitute it for a tri bike in a pinch.

Argon 18 doesn’t have full build specs on their website yet, but they did have some rather interesting build pics: 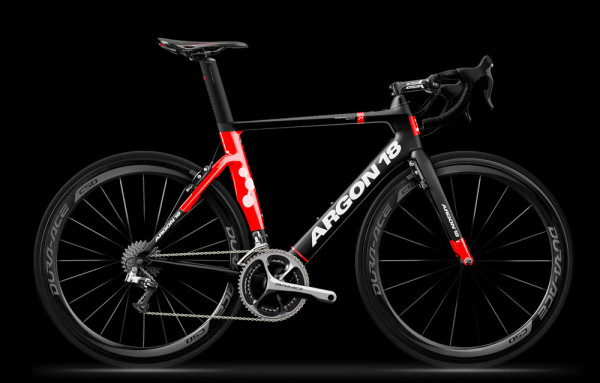 UPDATE: We first heard rumor of a new Di2 group spotted on an Argon 18 road bike while walking Eurobike. Then, we got the full download on 2015 bikes and a tip from a reader, hence the speculation below. The descriptions have been left intact for fun by turned italic to set them apart. Why leave them in? As a reference point for one, but also because they look great. Sadly, they’re not real. Argon 18’s marketing chief chimed in to say: “The images you’re referring to are actually 3D renderings. This is why there are some slight differences with the angles and light on some of the bikes’ parts. So, to answer your question, our 2015 bikes are not showing a new Shimano Dura-Ace Di2.”

Besides the very different build from the Eurobike display model, it appears to out what could be a next generation Dura-Ace Di2 (thanks to Michael for the tip!). 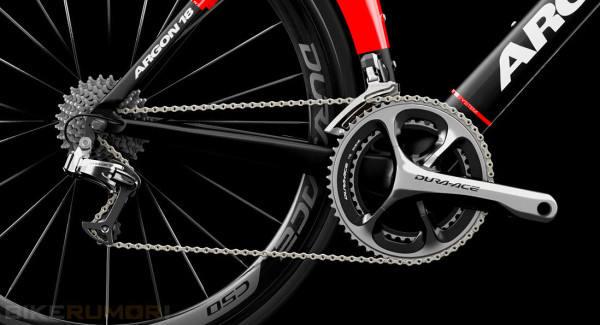 Two things jump out: A more angular design to the rear derailleur with a slightly smaller tail end and harder lines to the front “P” knuckle. The front derailleur looks much, much more compact with a more distinct crease and indent at the front of the outer cage. 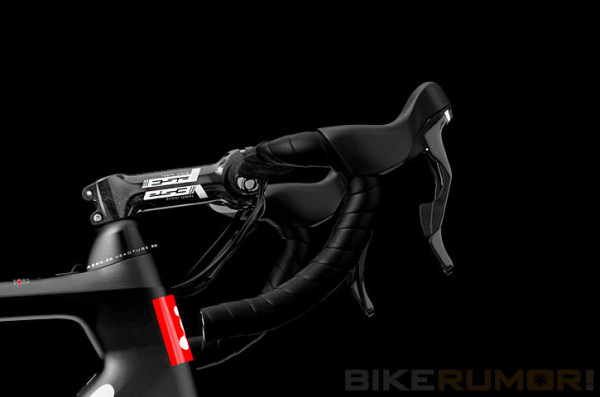 The levers get a more pronounced point at the top of the hoods and very angular button shapes. The front button that sits against the brake pad seems to move most of it’s surface area lower, creating a more cohesive button area. Altogether, the group looks a little leaner and meaner.

So, is this the next gen Di2? Or just renderings to fill the website? (…) a leaner and meaner seems like the right progression for a group that’s seen a couple years of action.

Now, back to truthiness: 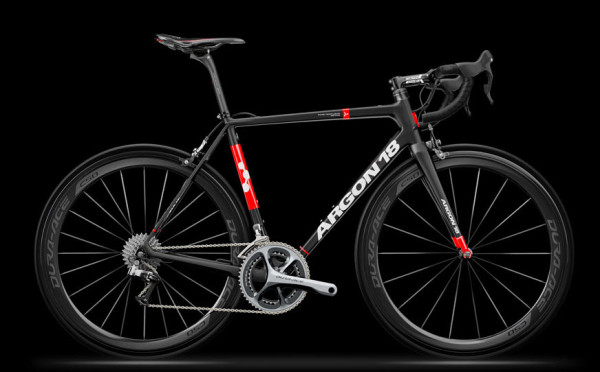 Their Gallium Pro race road bike (above) gets the same image treatment along with blacked out C50 carbon tubular wheels, as does the updated E118 Next triathlon bike: 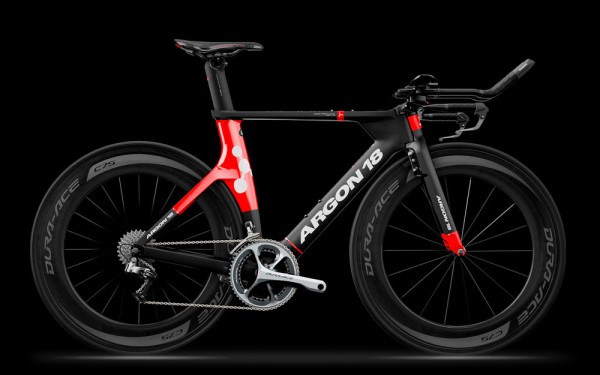 If you need more aero than the Nitrogen, Argon 18’s E118 Next is the, uh, next generation of their flagship triathlon bike. They took the frame and rider through a CFD analysis and wind tunnel to improve overall aerodynamics with someone actually on the bike. Compared to it’s predecessor, the E114, this one proved to be 5% to 20% more efficient depending on wind angle. They did this by tweaking the geometry to make the rider more comfortable when tucked – the chainstays are a bit longer to improve stability and shifting (longer chainline), and the BB was dropped to 75mm below the axles, putting the rider lower on the bike. Combined, it allows for better control even in cross winds, which lets you stay lower longer. 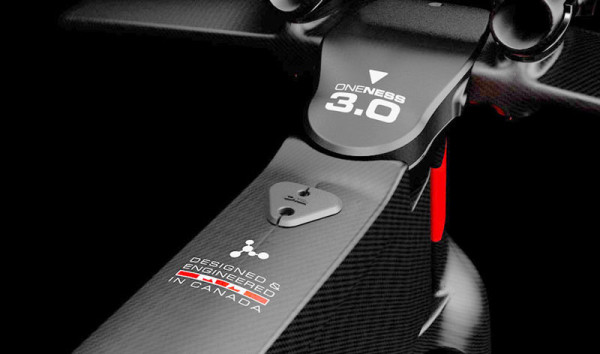 The Oneness 3.0 stem integrates the top half of the stem into the steering column to clamp the bar in place with a sleek solution. That keeps stack height lower, which keeps the rider lower. The handlebar can be flipped for a 10cm height adjustment at the ends, and two sets of aero bars (straight and S-bend) are included. 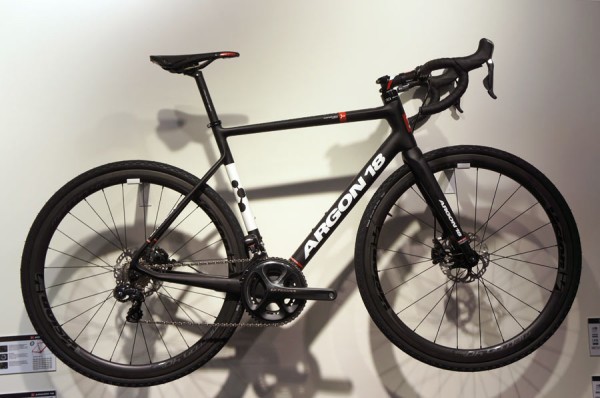 On the gravel front, the new Krypton XRoad borrows the new 5007HM carbon layup of the standard Krypton and adds disc brakes and clearance for 32c tires. Combine that with a 27.2 seatpost and you’ve got the trappings of an off-pavement pounder. 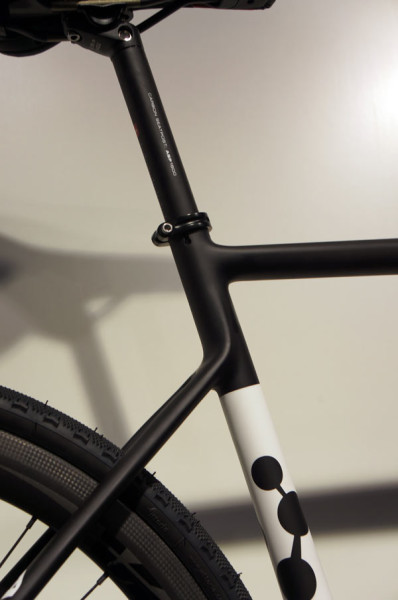 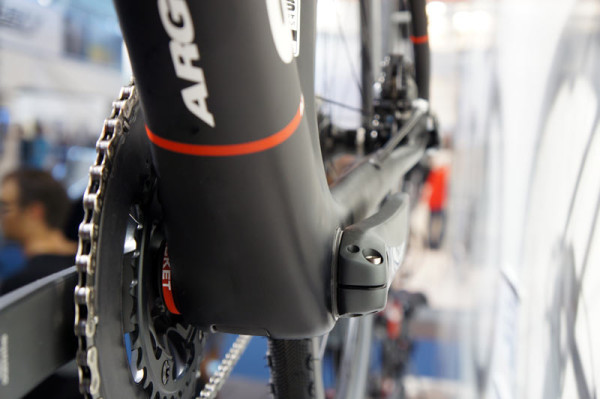 …while the massive BB and downtube keep your perfect circles moving the bigger circles efficiently. 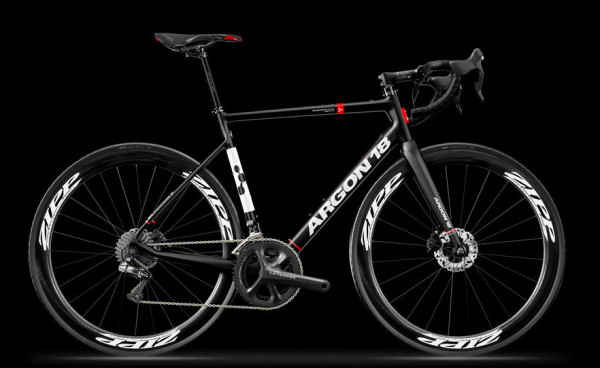 The official spec looks different than the display bike, and full specs aren’t available yet online.

Close inspection of the Di2 rendering reveals a too small cog and a too small top pulley resulting in a funky chain profile. Also, some chain suck on the bottom of the crank. Clearly an artist’s rendering.

Even closer inspection reveals that these don’t have disc brakes, sales of bikes this year must be way down while people wait for something that (works) won’t be obsolete in 6 months.

Gravel bike with clearance for 32c? As per BR reputation I hope that’s a typo. Damn nice looking bike but 32c won’t handle any kind of gravel I know of.

yup just checked the argon18 website and 32c it is 🙁

Those Vision wheels are sick. Buddy has a pair and said they ride insanely good.

the trp linear brakes look like they improve on their current ones a lot. pivot is much farther from the pads, decreasing leverage, so pad clearance will be greater and lever feel will be firmer. it also looks like the leftover cable after the pinch bolt stays inboard of the brake arm instead of sticking out with nowhere to go.

The TRP cantilevers are poorly designed. The cable gutter that shifts the cable 90° creates too much friction. Releasing the brake lever doesn’t fully release the pads off the rim. A play therefore appears in the rear lever, and the pads stay close to the rim. Also, the lever ratio of the canti is way to long: you brake lever comes at close range of the handlebar to actually only displace the pads onto the rim. I am not going for cantilevers anymore. I miss calipers.