Building off their existing inverted fork designs, the new German:A Flame fork takes the internals are from their 130mm 26″ fork, then limits the travel to 100mm to allow proper tire clearance at the crown under full compression.

It’s built around a 142mm front hub and has clearance for 26×4.0 tire. Up top is their travel adjust button, found on all their forks, which uses a dual air chamber with a valve in between. Simply put your weight on the fork and push the button and it’ll drop into its travel. Stop it anywhere you want and release the button and it’ll stay there, working as normal in the reduced travel mode.

The rebound knob on the bottom uses a very different actuation design. Click the image to enlarge – it threads the ramped pin in or out, allowing a spring loaded adjuster to raise or lower, thus affecting the rebound port inside the damper. Retail is €1,100, which is €100 more than the standard width crown.

If you look at the top image again, you’ll notice the Flame fork’s mounted to a standard straight headtube. Sure, they’re getting rarer by the minute, but German:A’s solution allows the same fork to be used on straight and tapered steerers with no adapters: Their “tapered” steered uses a 1.5″ lower race that seats directly in the bearing on the frame. It’s only 5mm tall, so if you want to run it on a 1-1/8″ frame, you can, simply putting the crown race on top of the 1.5″ seat. Brilliant. Announced last year, the new Revo dual crown DH fork has seen a few interesting placements and add-on features. First though, a look at what makes it special: Inside the uppers, the stanchions change to a tear drop shape to prevent twisting and reduce stresses on the axle. We covered the tech behind this design last year. It also has the travel adjust button on the right, and it uses the same modified tapered steerer as the other forks, so it’ll fit any frame. What’s new is that they’ve designed a version for e-bikes, too. Say what you will, there is a market and place for these in some countries. The integrated handlebars aren’t installed, but they make them to work with their dual crown forks, which allows the center section of the top crown to double as a system display. It’s a clever integration that saves space and makes for a very clean cockpit.

Also not shown here, they mentioned their own electronic suspension damping system. Called Trail Tronic, it was invented in 2006 and 2007 for Trek, but at that time no one wanted to have a battery on their bike. It electronically locks out the fork or shock, then automatically opens up when you hit a bump. They seemed to have a renewed interest in it, what with systems from Rockshox/Lapierre and Magura hitting the market and all. 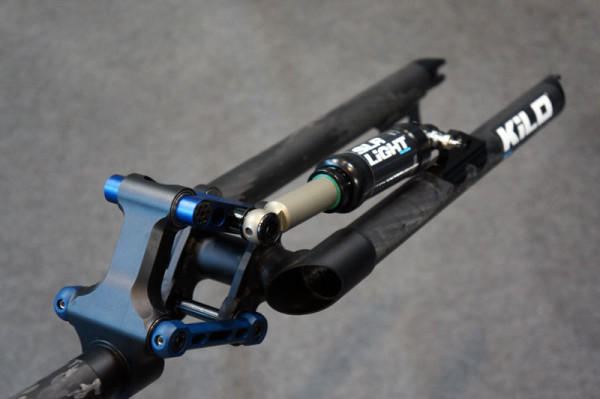 With all the electronics looking forward, it’s comforting to know they’re still making their parallelogram Kilo suspension forks, and they’re some of the lightest suspension forks in the world…as light as 1,098g!

They said Dean Titanium Bikes is their U.S. distributor, and that they’ll get some OEM spec on Ellsworth bikes for 2015.

Whilst I’m unlikely to ever buy any, I love German A and their gloriously over engineered everything. The bike industry would be very boring without companies like this.

Bit of a blast from the past – the KiLO reminds me of the old AMP forks. I know that inverted forks have come back, but I still think of the Halson’s from back in the day.

Looks like already a blown seal on the left leg of the new fork. Ohlins seals, perhaps…?

They have been selling the fat bike version of the flame for a couple years already.

I don’t like how their “tapered” steerers are not tapered. It looks like they invested a lot of money in machining fork crowns from a certain size of billet block back before 1.5″ lower races became standard, and are now stuck with their decision.
It’s also weird how 100 percent of the offset on the inverted forks is in the dropout. People forget that forks are also a type of rotating weight- they rotate when you turn them. The original Halson inverted forks also had all of their offset in the crown, and they were noticeably harder to turn than forks of similar weight with all their offset in the dropouts (for example, Manitou).
The Kilo is seriously rad, though. Would love to try one out. Just wish it had a 1.5″ steerer…

@ Tim:
The design of the 1.5″ lower race is a special idea. Normally the forces of riding and breaking are going through the (tapered) steerer into the crown and down through the fork(or the other way around). With the bearing seat on the crown the forces are going directly from the Frame to the fork. So they are able to use a carbon steerer because this part is nearly force free!