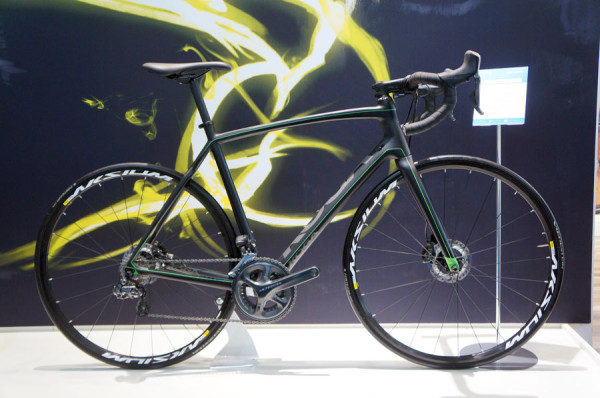 For 2015, the Koga Solacio road bike will get a hydraulic disc brake model. It’s the one they’ve used to tease their new flat mounts with, and it’s finished off with the new Mavic Aksium disc brake wheels, an Ultegra compact group and Vredestein Fortrezza Duo Comp 25mm tires.

The bike is laid out for endurance racing, combining a lightweight frame with slightly relaxed geometry. All the usual modern standards are here: PFBB30 and tapered headtube, plus a chainsuck preventer behind the cranks.

Even more impressive was the collection of anniversary road bikes leading up to the all-new 40th anniversary Kimera Road Pro. The oldest, a Miyata Road Pro raced in 1981, was decked out with original first generation Dura-Ace, a group that had far more parts to it then than the modern iteration does. In between was a 25th anniversary build, all fitting neatly together since Koga (’74) and Shimano Dura-Ace (’73) almost share a birth year…

A few different angles of the Shimano Flat Mount disc brake standard. Frames are getting ready, but actual compatible brake sets may be a little ways off. The Solacio Disc should be available later this year. 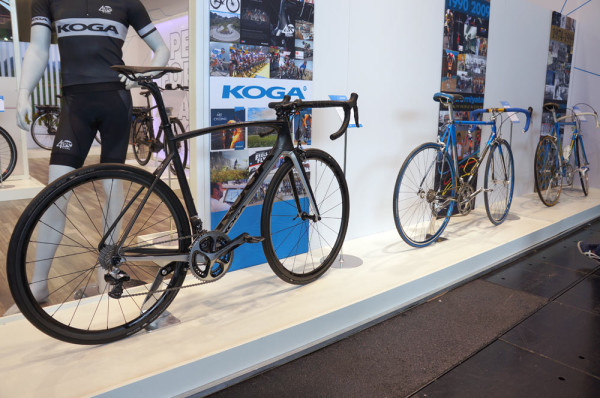 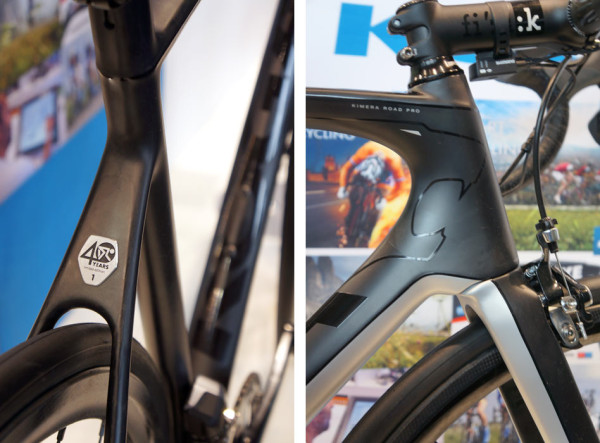 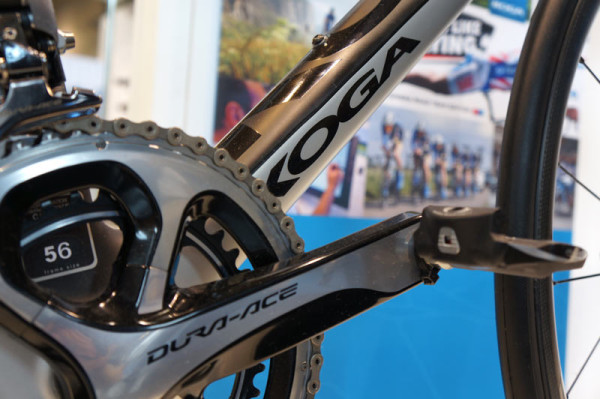 The frame is 40T hi-mod carbon with a UD outer finish. All cables are run internally. Other features include full carbon dropouts, replaceable derailleur hanger and chain suck protection. 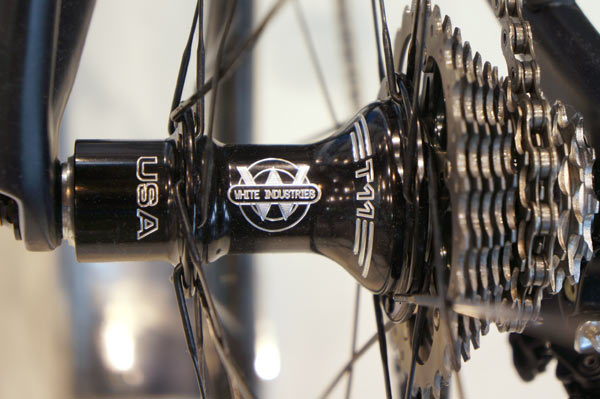 The wheels are custom, UD carbon rims from a well-known manufacturer that shall remain unnamed (basalt braking surface). They’re laced to polished black White Industries T11 hubs with Sapim CX-Ray spokes and internal nipples. The entire bike comes in at claimed 6.6kg (14.55lb, size 56 without pedals) and will retail for €7,999. 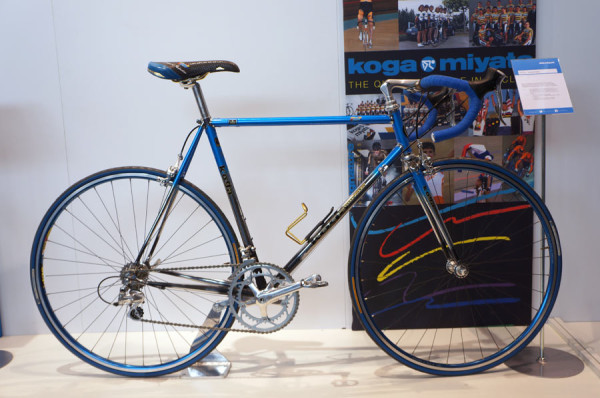 Until 2010, Koga’s frames were produced by Miyata, and their name was placed as a suffix behind the Koga branding on those models. Stepping back in time fifteen years, the steel Koga-Miyata Road Pro was built with the then-latest Shimano Dura-Ace 7700. 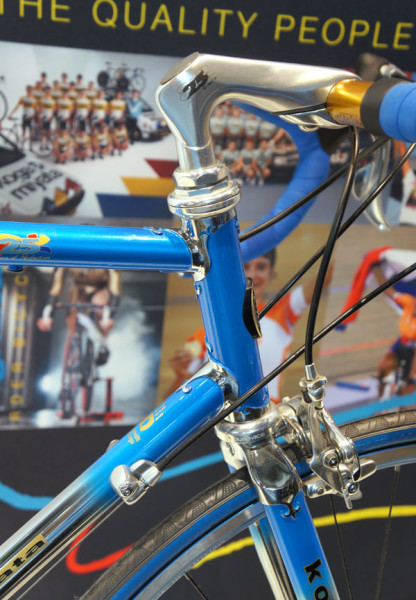 Only a limited number of 25th Anniversary branded components were made, coming in an aluminum suitcase with full color book and more. The group included a DA-branded headset and seatpost, something you don’t find on Shimano’s modern high end collections.

Shimano didn’t make the stem or handlebar, but this build got the commemorative graphics. 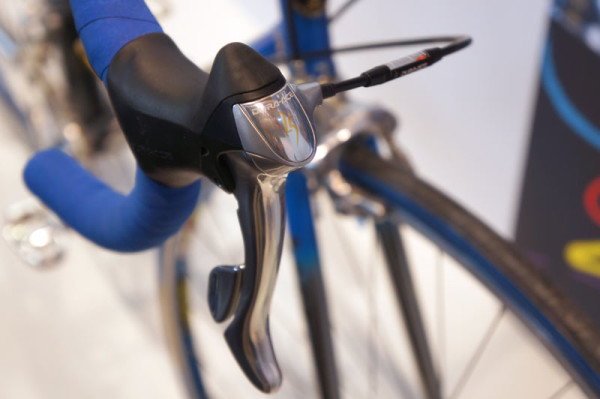 All 25th Anniversary components received a polished finish. Other than internal cables, the functionality of the STI shifters hasn’t changed much over the years. 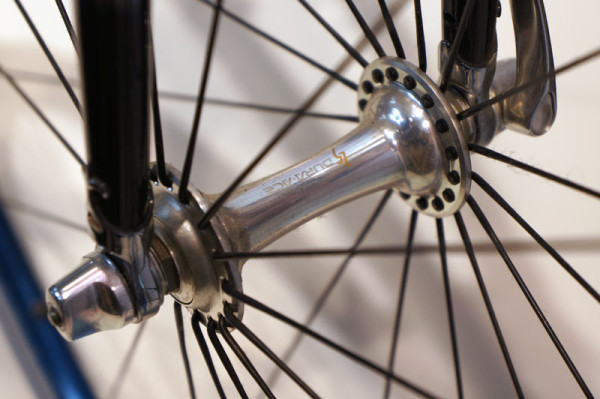 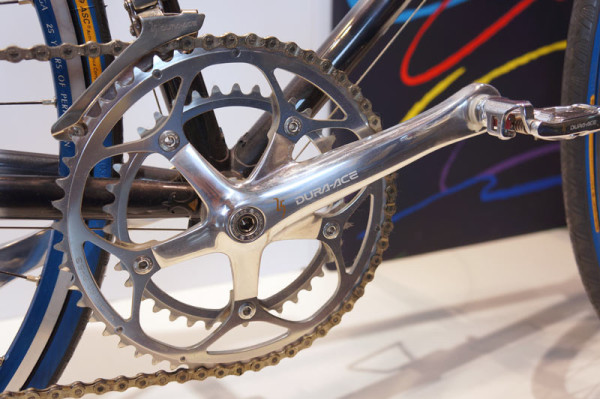 Pristine 25th Anniversary groups are selling for $3,500 and up these days! 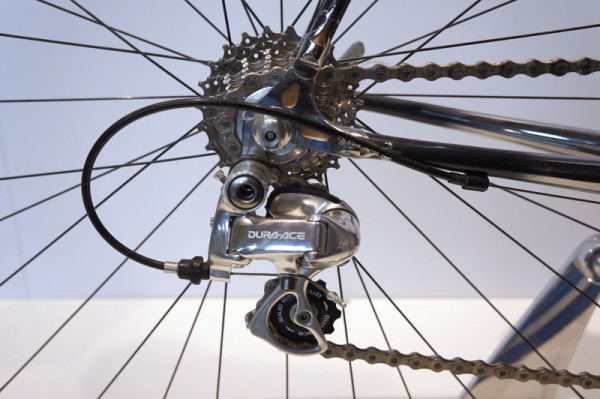 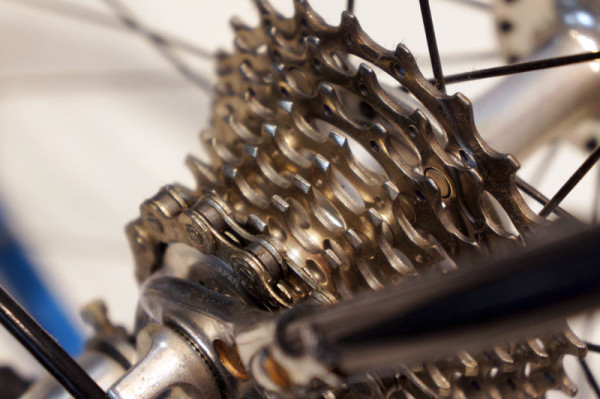 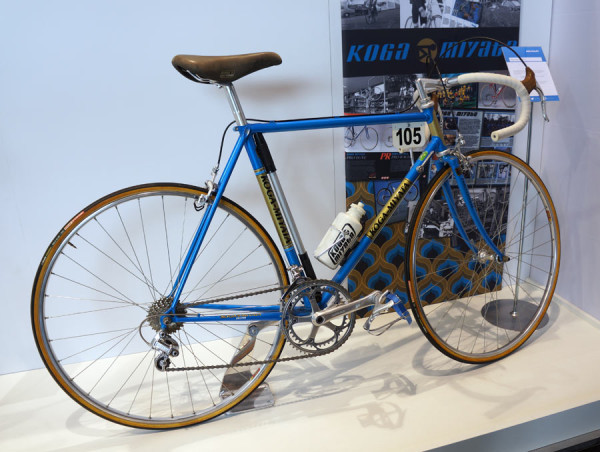 Koga started small, as most brands do, with founders building a few frames by hand, and also becoming an early importer of Shimano cycling components for the Netherlands. The brand is more storied than we realized, and their history page is worth a read (H-ball rode them!) for the true fan. Above is the Koga-Miyata Road Racer, which debuted in 1976. 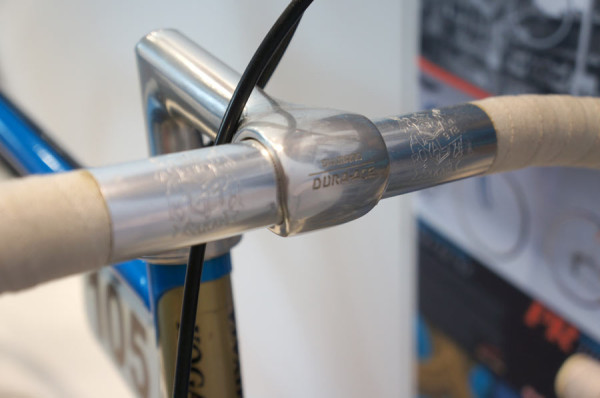 Yes, once upon a time, Shimano had Dura-Ace stems. 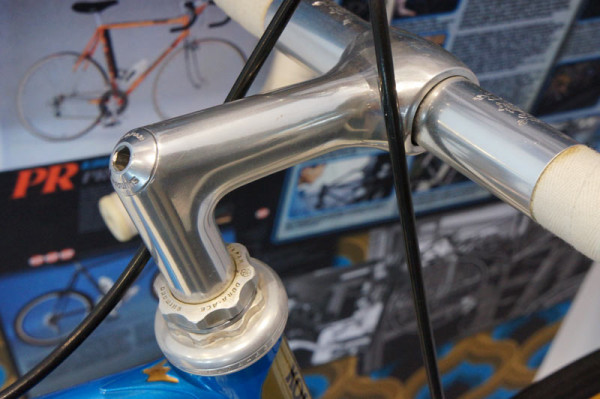 Check out the locknuts for the threaded DA headset. 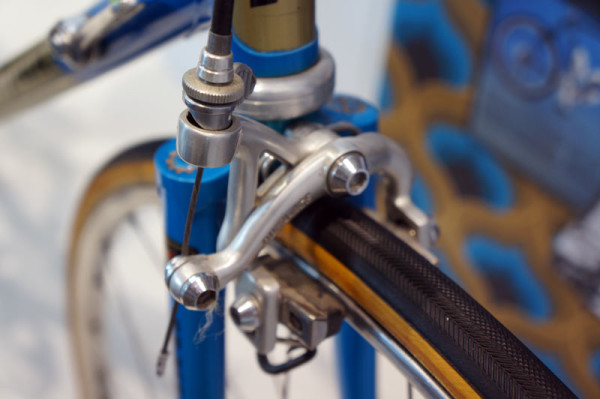 Quick release lever was there from the outset. 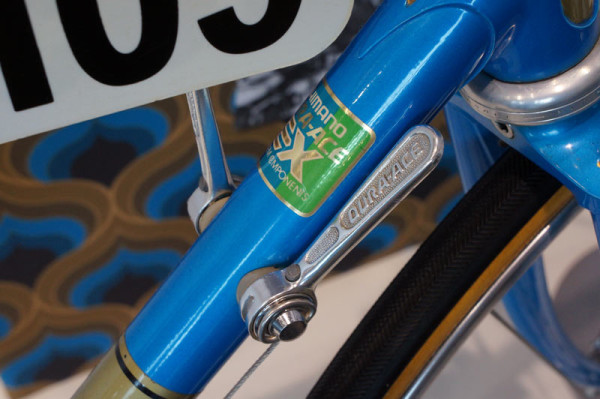 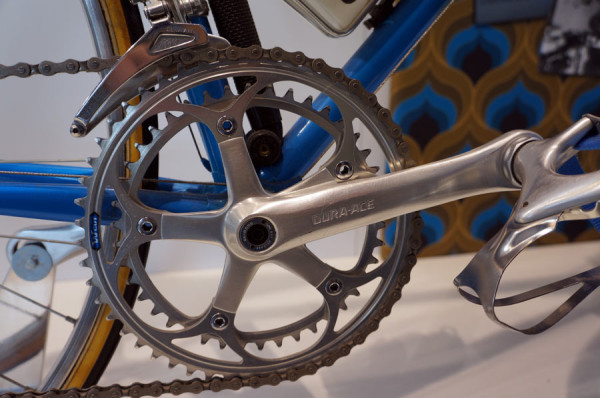 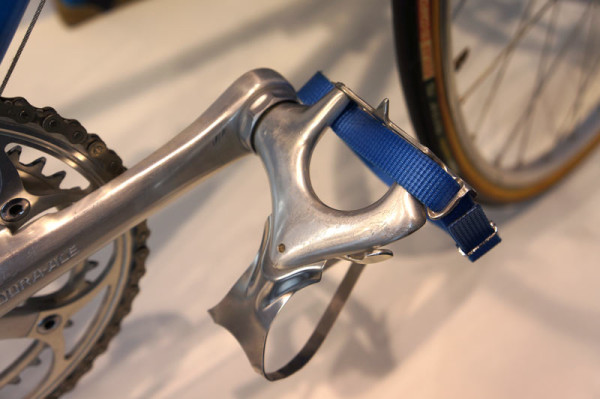 Forget Campy seatposts, the Dura-Ace seatposts are the real find! 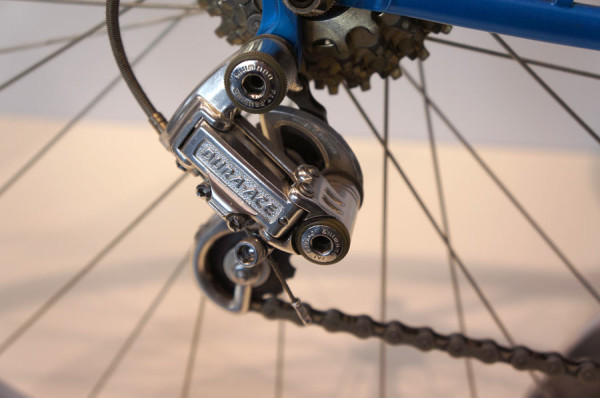 Originally called the Crane derailleur, the first Dura-Ace refined Shimano’s materials selection and design to create a top level group, a good idea since 1973 was the first year they set up their own domestic Japanese pro cycling team. 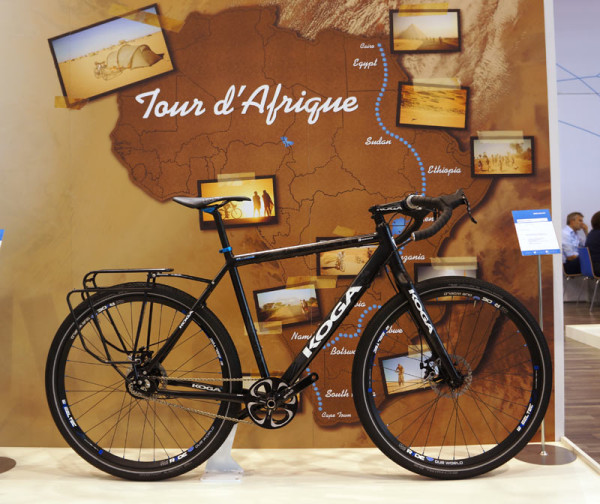 This one gets full rack mounts at the rear with a carbon rigid fork and Rohloff internally geared hub. Check out the event’s page about Koga’s team here for more of the story.

Just mentioned the Dura Ace AX pedals this morning during a sales meeting. Never mind the stem or seatpost, the DA AX pedal conversions are the real gems.

That’s not a locknut on that stem. It’s just a dust cap.

No that is a locknut, came with their own wrenches. I worked on them.

That’s not the stem they are referring to, it’s the headset. Look at the non-hex race and lock nuts.

For some reason I read the locknut thing with the stem.

The headset did use its own special tools to avoid slippage. The stem has a dust cover for want of a better word. You take that off and there is a an Allen key access for both the expander for the steerer tube and one going towards the bars to tighten the bars. It was really neat idea.

I see a bloke on the train commuting on one of those older Miyata’s just like the one in the pictures. Time hasnt been kind on his example and it looks very tired. I will have take a closer look tomorrow.

I just acquired a 1981 Team Miyata, not knowing a lot about the marque. It’s not been ridden in a long time, but it doesn’t have a speck of rust anywhere. I think it just needs its bearings repacked, new rubber, and new chain. That 40th anniversary Koga-Miyata is amazing. How might someone in the US acquire one?