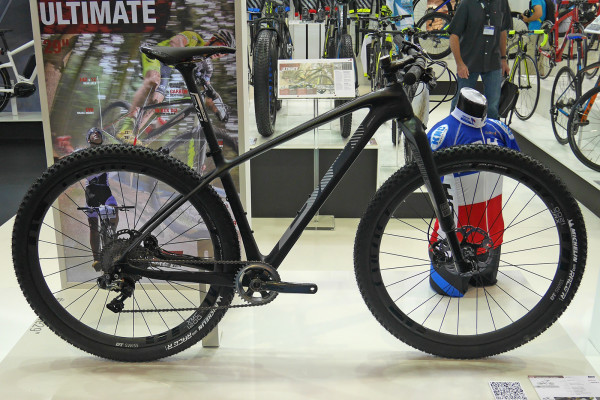 BH has a number of new bikes available this year, from their updated EMotion e-bike line-up to a couple of new road bikes, and several new mountain bikes. But there were two bikes they were most interested to talk at length with us about at Eurobike: the Ultimate 29, an all new carbon XC race hardtail, and the aero road G7 Disc that they introduced just before the show. We got a closer look at these two bikes and came away more details on both. Hop across the break with us to take a closer look… 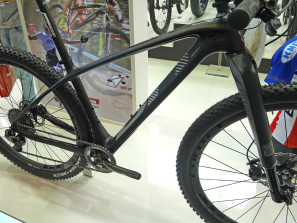 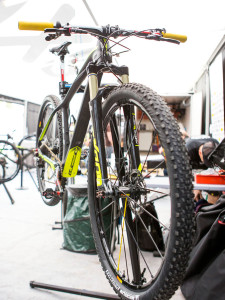 The Ultimate was developed as a top-level race bike for their World Cup team – BH Suntour KMC, and we had a chance to get a bit of a sneak peek of the bike at the early XCO races. The claimed 980g carbon frame gets the typical geometry update of the 2015 with longer toptubes and shorter stems, plus a steepened head angle for more aggressive handling. It does gets optimized for 1x drivetrains, but can accommodate a front derailleur with a BH-specific clamp. 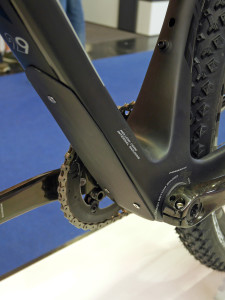 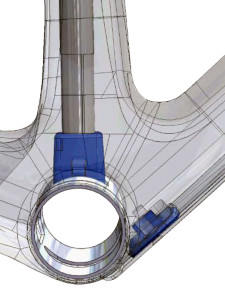 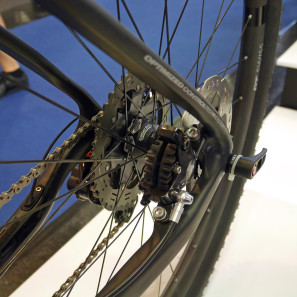 The Ultimate has a large carbon rock guard on the lower end of the downtube, which also covers a small removable panel for internal cable routing access and to install a Di2 internal battery. The pro team wanted to get the battery lower in the frame for a better center-of-gravity, but the team mechanics weren’t satisfied with existing battery mount options. So BH developed a small holder that clicks into the PF92 BB shell and locks the battery securely in place (with charging done remotely.) The rear end uses a Q12 12×142 thru-axle, and gets an updated post brake mount located inside the rear triangle directly over the dropout to reduce brake vibration in the lightweight tubes. 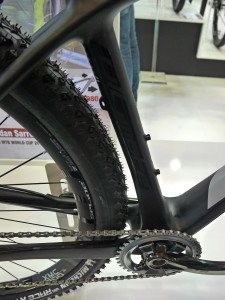 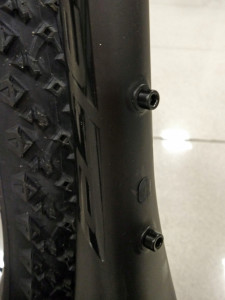 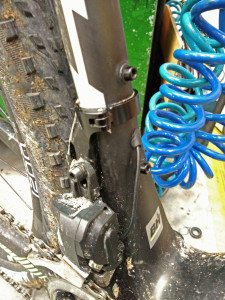 The bike gets fully internal cable routing, with modular covers for singles, doubles, and Di2 setups for either option. The Ultimate also gets set up for a 31.6mm seatpost, which allowed the bigger tubing to make the frame lighter, but also made the add-on of a dropper post possible, with included internal or external routing. 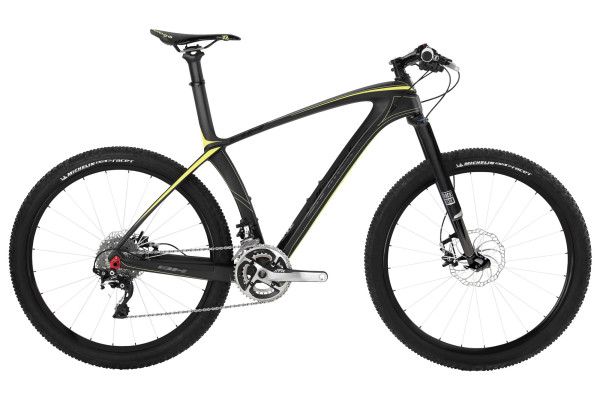 At the same time as working on the new Ultimate 29 for their race team, an Ultimate 27.5 was also developed. Designed with generally the same goals, the 27.5 bike goes about it in a much different way. The smaller-wheeled bike gets chainstays only 5mm shorter than the 29er and about 10mm shorter reach across the sizes, both of which shift the rider back for a more playful ride, but required some dramatic seattube shaping to get the saddle position correct. Add in a partial seat mast to allow more seatpost adjustability and you end up with a completely different bike. The 27.5″ 9.7 and 9.5 share the same price and spec as their 29er brethren, but the 9.9 is a bit cheaper at 6400€, mainly due to getting a lower wheel spec. 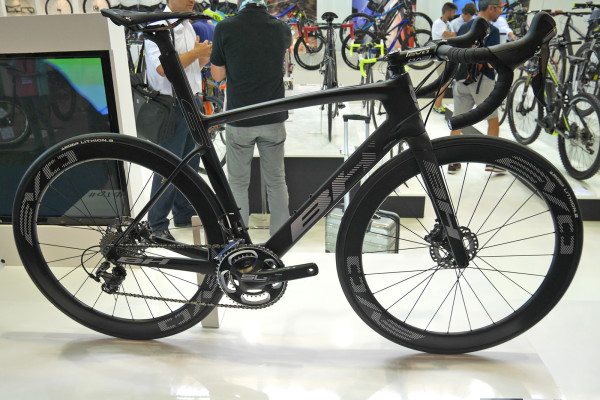 We were teased with the new BH G7 Aero Disc just before Eurobike and were curious to see it up close. The bike takes over the top of the aero line for BH, and the caliper-equipped G6 will carry on for those opposed to disc brakes on an aerodynamic road bike. But BH isn’t too worried and fully committed to the new bike. They combined wind tunnel testing and computer modeling and were happy with the minor penalty for shifting to discs, which they said they easily made up for (and passed) by optimizing several elements of the new G7 frame design.

The G7 Disc will be available in December for 8000€ with Dura-Ace Di2 hydraulic, for 6500€ with either Red22 Hydro or Ultegra Di2 hydraulic, or 5000€ for Ultegra mechanical/hydraulic. All four builds get FSA cranksets and BH’s branded Evo50 Disc wheels. The D-A Di2 bike gets a claimed weight of 7.3 kg, the Red version 7.2kg, the Ultegra Di2 7.4kg, and the standard Ultegra at 7.3kg. 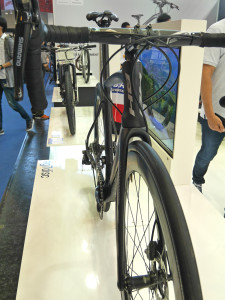 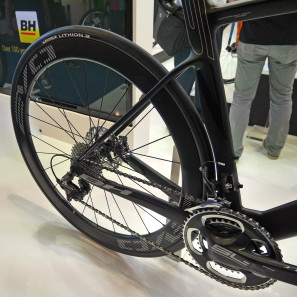 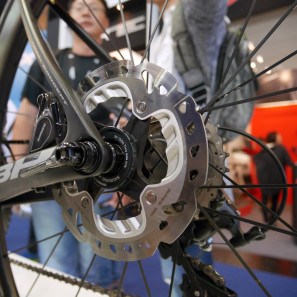 The frontal profile of the G7 is fairly clean and simple for a road bike, without getting crazy with cable routing or a lot of integration, and the lack of a caliper both cleans up the air space around the fork crown and allows more tire room. The rear triangle continues that nicely with the dropped seatstays and a wheel cutout that sill keeps ample room for wider tires. Nicely looped thin stays around the thru-axle (12mm front and rear) finish out the bike in the back with flat mount disc brakes keeping the brake impact on aerodynamics low. BH stick with smaller 140mm discs front and rear for even less impact, but it isn’t clear whether the Shimano Freeza rotors will make it on production spec bikes. 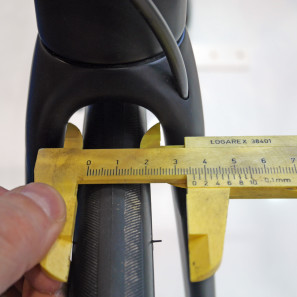 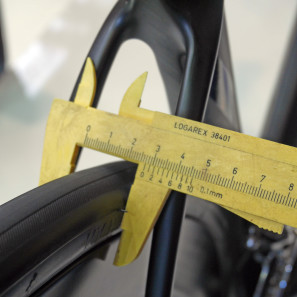 Tire size and clearance was a big topic of discussion for BH with the move to disc brakes on the G7. They recognize that a lot of disc-brake road riders want the option for wider tires to expand the capabilities of the bike, even with an aero-focus. But BH also knows that the widest tires most cyclists interested in aero benefits will buy are 25s, so that is what the bike was optimized for and what comes spec’ed on each build. But the wide, blunt profile of BH’s in-house Evo50 Disc carbon clincher wheelset pushes those 25s out to 27mm. And with the most constricted part of the bike a toss-up between the fork and chainstays, either one looked to clear tires well over 30mm, which should satisfy the fat tire road crowd.

A last interesting point to add to all BH bikes bought through the regular dealer network… all frames road or mountain get a lifetime warranty against defects. It’s good to hear that BH have confidence in their manufacturing and stand behind their bikes. We’ll be excited to try the new G7 when it is available.

I’m not convinced that they didnt just take a TT frame and put 650B wheel on it. That thing looks terrible. And please, they couldn’t have used a ST that looked a little more traditional?

No I’m wrong, it is different isn’t it?

If you blow up the pic and look at the dropout, you’ll see some bad photoshopping going on. I’m leaning more toward the theory that someone in BH cobbled together an “RS-1” onto a bike w/ a traditional crowned fork. Then again, it could be a leak of a lower-priced inverted XC fork from RS…

@Marco They didn’t specify it so it might not be set, but both samples we saw had 50/34 compacts, which is a bit strange for something aero. We would hope that it gets a standard or mid-compact by the time it becomes available.

@Every One Else It is a 27.5″ RS-1, but unlikely anything we hadn’t seen before. The newer RS-1s weren’t available when they did the photo shoots, I suspect. (Even the 29er gets the same Photoshop hatchet job on their website.) Most of the spec sheets hadn’t been updated to show the smaller wheeled RS-1, but it is what we’ve been told will be the spec. We did not see this build of the bike in person at the show, hence the studio pic.

@Cory: Unfortunately that’s exactly what the swiss distributor told me. They will receive the dealer catalogue next week with the detailed specifications. I hope it will not be compact.