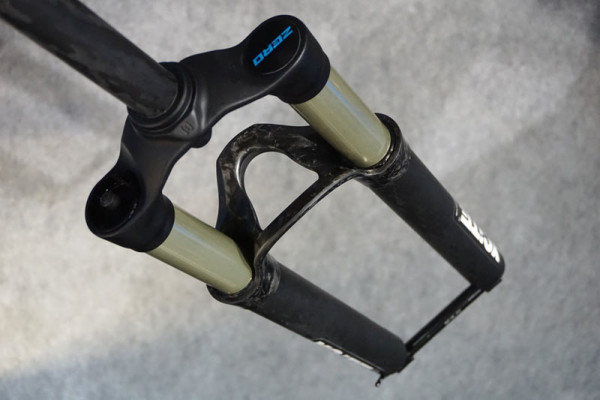 German:A is no stranger to lightweight forks, having offered the linkage driven Kilo model for years. But the new Zero-series forks and shocks take it to a whole ‘nother level by getting traditional lowers and stanchions into a package that’s under 1kg.

The new Xcite Zero comes in as light as 988g and is the lightest traditional suspension fork available. Lauf’s leaf spring forks still come in a bit lighter in some configurations, but German:A manages to do it with more travel and adaptive damping…

Much of the weight savings comes from a full carbon lower and crown/steerer, save for the alloy bearing race. they build the taper into the race rather than the steerer tube, so while it looks thin, it is designed for a 1-1/8″ to 1.5″ taper.

What you can’t see is the new IIAS (Intelligent Integrated Adaptive Suspension) all-air damping cartridge. Because the ink isn’t dry on the patents yet, they wouldn’t give up too many details other than to say it’s a combination of more than three air chambers. The damping comes thanks to a series of valves working between negative chambers.

The only adjustment is in the air pressure. The damping system adapts to the speed and depth of the hit it’s taking (or your weight pushing on while climbing), keeping it firm and slow while climbing and in slow compression, but instantly opening up on big hits and instantly resetting after each cycle. They say it’s theoretically perfect, and the demo fork did feel very impressive. 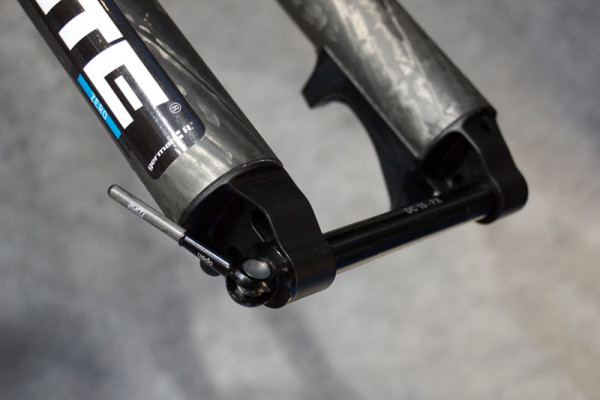 Their forks build the offset into the crown rather than the dropouts, which points the fork legs more toward the approaching obstacle. That keeps the moving forces completely linear, so there’s less shearing forces between the stanchions and bushings. Standard issue will be with a 15mm thru axle, and the production dropouts will be in carbon, not alloy as shown here.

There’s not a drop of oil in the fork. They use a light grease on the seals and bushings, and the outer casting can be easily removed and relubed, then reinstalled. The air cartridge is fully closed and stays intact, so there’s no way to mess it up.

Choose either 100 or 120mm travel in three wheel sizes, all of which use 36mm stanchions to keep it stiff. Claimed weights are: 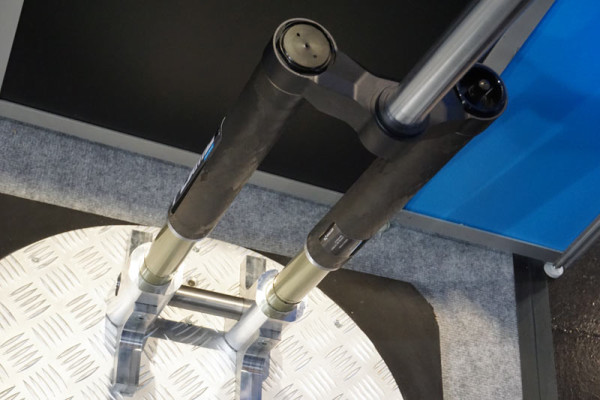 Will also be offered on their inverted Flame Zero, which also uses 36mm stanchions. Options are:

Weights are a bit higher on this model but weren’t available. 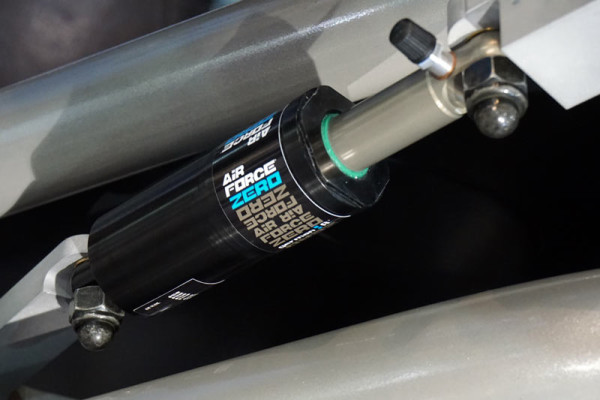 The Air Force Zero borrows the same air damping design as the fork to keep your rear wheel planted on the ground regardless of your speed or terrain. In it’s lightest configuration, it comes in at an amazing 98g (165mm eye to eye). Others include 190/195mm (109g) and 200mm (111g). 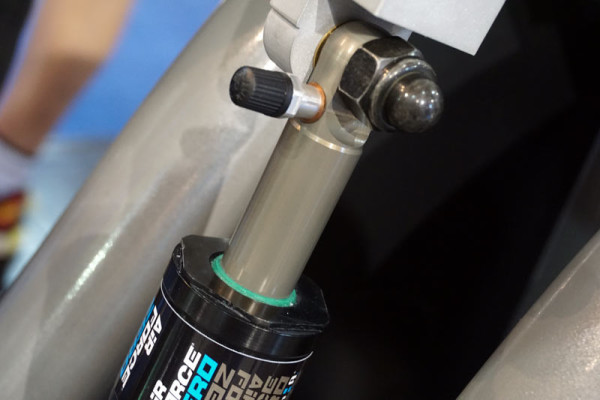 It’s only for bikes up to 120mm travel, mainly for XC. Like the forks, the only adjustment is air pressure, the rest is preset internally to automatically adapt to low or high speed hits. 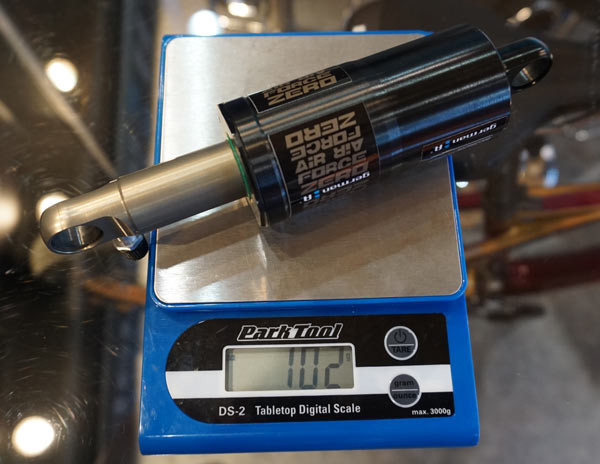 Pricing isn’t set yet. The forks shown are also available in their standard (non air damped) versions, which includes a new Boost model Flame and the fat-bike spaced Flame we saw last year. They’ve also added a Flame Wide Carbon for fat bikers looking to drop a bit more weight. It comes in at 1,535g and shares the same wheel/size travel options shown for the Zero model.

So what do they do about heat?

methinks there might be some typos in the weight chart. Unless they have 5 26″ versions with only 2 travel options and different weights.

What they do about heat is the fact that 100mm xc forks don’t generate that much. I have a Magura mx shock (which is zero maintenance since there is no oil or sliding seals), and can attest that so long as you don’t need a real firm lockout, pressure damped suspension can work in light-duty applications like XC.

i – good catch, I’ve fixed the weights chart…two travel options for each wheel size only, internals are all the same.

I look forward to see what they are doing for the air damping. Unlike oil, air is compressible so damping will change based on pressure build up (compression of the shock). So air damping is a bit of a wild card. I’m sure that is why it is XC only.

Gotta work better than Halson’s did.

Englund Total Air Cartridges. I used these back in the 90’s. The damping was super fast at the top. Would eat through top out bumpers. Unlike this design the damping could be adjusted.

Here’s hoping German A got around those issues.

OR they could have just given the option for a 15mm through axle on the kilo models. That’s the only thing holding me back on one of those. (Rode the original amp fork back in the day, it was fantastic).

i never found out for sure, but I thought earlier cane creek shocks were fully “air damped”, weren’t they?

Hah… you’re exactly right on this one…

lol “the extra strength of a tapered steerer.” You still get the larger bottom bearing which is really the only thing that matters. And then you can use this for both types of frames and it weighs less.

the cloud 9 shock i had on my old trek fuel was well better than the rock shox it came with… that was about 2006 though… why fid i sell that bike last of the usa made fuels..

@Veganpotter there are still far more 26″ bike then any other size! I personally still see lots of people riding 26″ bikes. So it makes a lot of sense!

Except that the taper is what adds strength to the fork, and there is no provision for mounting a 1 1/8 race. The wider bearing is only kinda nice, in the case of lighter frame materials, the larger lower headtube makes for a better junction with the necessarily larger downtube, but the fork is definitively weaker with a straight steerer. I would think that making a fork light, one would have an eye towards its possible failure modes. Building a lovely stress riser right into the bottom of the steerer tube, is, IMO, pretty dumb. That said, having never used an air fork for any length of time I have no idea if they’re onto something or not, other structural decisions seem to be less problematic.

@Dominic- I totally agree that tapered steerers are better and stronger than non-tapered ones. But… I don’t remember lots of people bending or breaking straight steerers. 1.5″ bottom diameter improves steering through increased rigidity in theory, and is additional insurance against damage. But yes, a modern fork should have a real tapered steerer, and if it doesn’t it’s either a weight-weenie fork or a low end one. BTW- give us 20mm, 15mm is in why-bother territory and saves only around 20g.
Anyways, steerer aside, this is a pretty cool-looking fork with some interesting tech and I am curious to hear ride reports about it.

@Tim People absolutely had problems with breaking straight steerers. maybe not on XC bikes, however. As to weight, color me unconvinced, as a tube with a smaller diameter needs thicker walls to attain the same strength. that’s why everybody is building frame tubes with large diameters, as it allows them to make thinner walls, & lighter frames. the Steerers on longer travel forks with straight 1 1/8″ are massively thick at the crown(as in, you can’t even get you pinky in the hole,) & the tapered models of the same forks are lighter.

@groghunter- You have convinced me, and are proof that reasonable discussion takes place in these comment threads.

@Tim Shhhh, don’t tell anyone or they might get jealous. 😀

not to contribute to this already too long thread- but I suspect this is just about cost savings, via not having to create a more complex tapered carbon tube vs. a regular straight wall tube.

Check out German:A`s explanation of their 1.5 system. Looks quite smart actually.
Race on the crown puts most of the forces away from the steerer and can make lighter solution. http://www.german-a.de/en/pdf/flyer/GA_katalog_2014.pdf

They’re right in principle, but i have my doubts about practice. The saving grace of their implementation is that the reduction in diameter is above the lower bearing. Having been one of those people who’s had a steerer fail on me, I’d still be sketched out.

cool brochure, in any case 😉