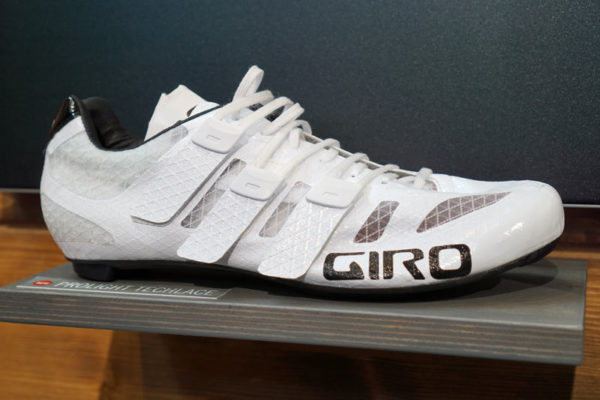 Giro unveiled their new Techlace enclosure system on the Factor just before Eurobike, then used the tradeshow to drop two more shoes using the technology. Designed to offer the comfort and fit of a lace up shoe with the quick adjustability of straps, the design marries the methods quite well. And now it does it in one of the lightest shoes ever.

Borrowing the name from their old (and dearly missed) Prolight helmet and currently Velcro-strapped shoe, the new Giro Prolight Techlace measures around 150g per shoe thanks to minimalist construction and their see-through Techmesh with a TPU skeleton. All of that is built on a TeXtreme carbon outsole shaped around their Supernatural last with an X-Static anti-microbial footbed. Step on in for more, plus lots of new helmets and a look at their upcoming Spring 2017 clothing…

While all of their carbon-soled shoes have thus far used Easton’s carbon fiber, these get TeXtreme’s wider, interwoven sheets to save even more weight without giving up stiffness. 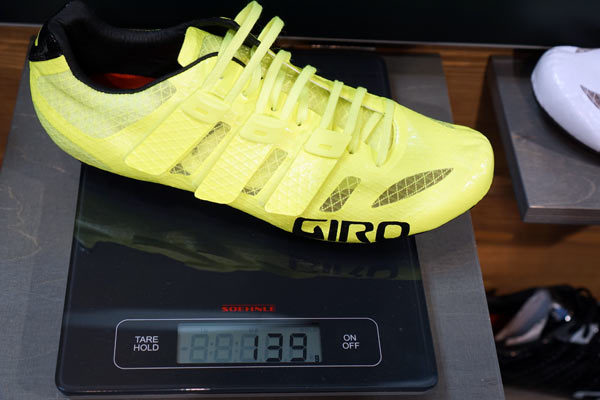 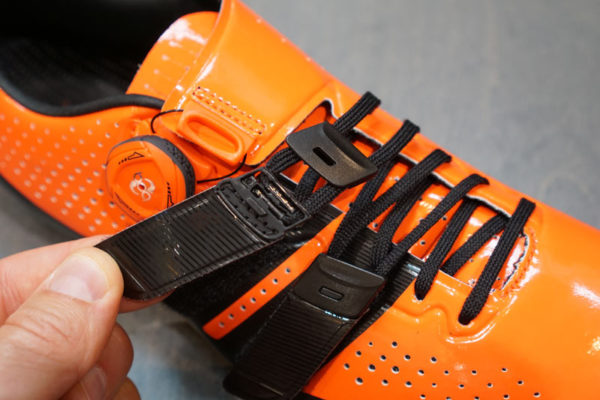 Check our earlier coverage on the new Factor Techlace, which sits between the Prolight and the Sentrie, below. This photo shows how the laces connect to the velcro straps – the aglets simply pop into the plastic base and get locked in once the cover is closed. This lets you replace them, and also switch to shorter or longer ones to accommodate different foot volume and somewhat customize the fit. Giro will offer these options aftermarket. 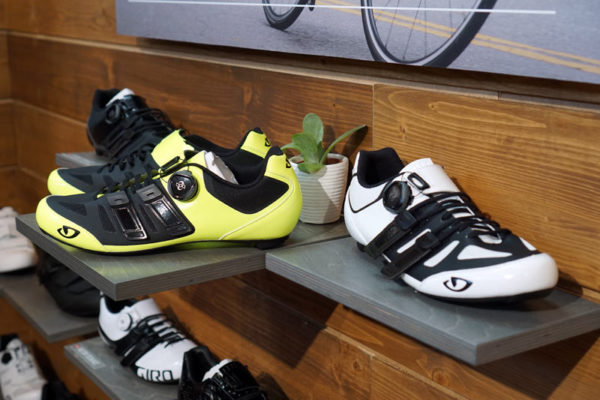 The Sentrie (men’s) and Raes (women’s) is similar to the Factor, but puts several mesh panels into place rather than a full microfiber.

It also uses the Boa L6 dial instead of the top end IP6, which still has 1mm increments of adjustment, but you need to pull it up to loosen rather than just click it backwards. The sole trades down from EC90 to EC70, but still full carbon with a front mesh vent and toe and heel grips. Comes in white, black and day-glow yellow. 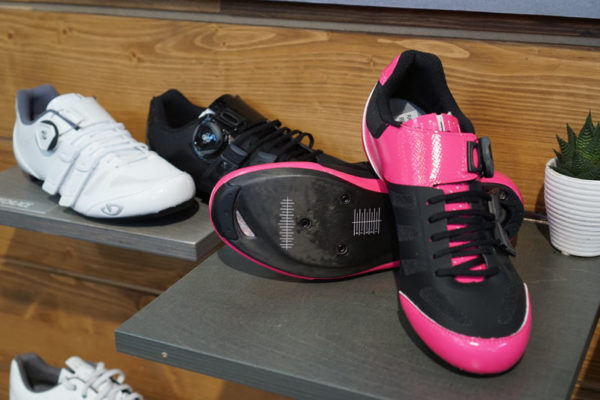 The women’s version trades hi-vis yellow for pink. They’ll retail for $250 when they become available later this year. Claimed weight is 245g for a 42.5. 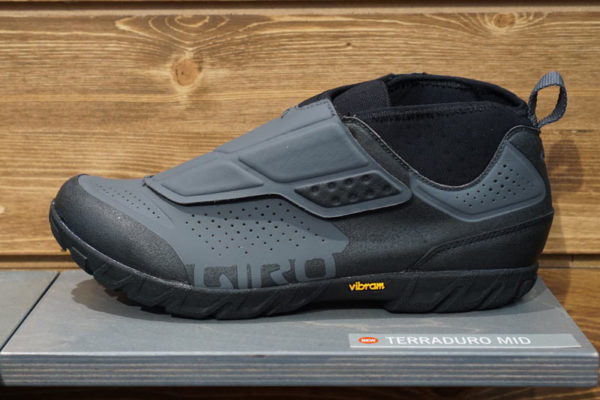 The original Terraduro is one of our favorite all-purpose “enduro” shoes thanks to its easy walkability and killer Vibram rubber treads and traction. The new Terraduro Mid keeps all that, but uses a taller mid-top design to provide better coverage and ankle protection. It’s a full lace up with a Velcro flap cover. The upper is made of Evofiber, a breathable microfiber, and the upper is DWR-treated Areaprene, which keeps dirt and rocks from getting in, but lets heat and moisture out. On the bottom, the cleat holes get an internal gasket to prevent water from penetrating under your foot. They’re not waterproof, but darn close. Retail is $190, sizes 39-50 with halves from 39.5 to 46.5. 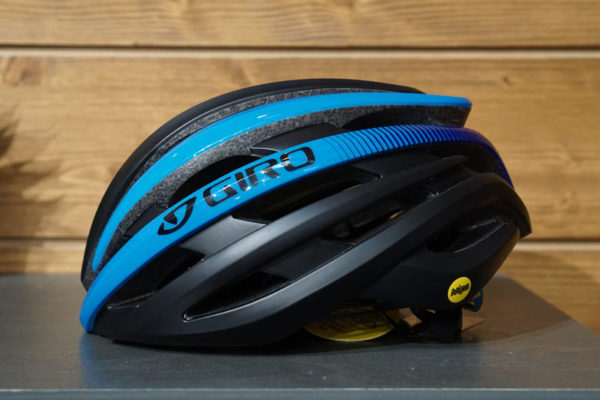 It doesn’t have the aero shielding, leaving all of the vents wide open, and it uses their SuperFit retention mech rather than the Roc Loc Air. Final weight is TBD, but they felt similar. 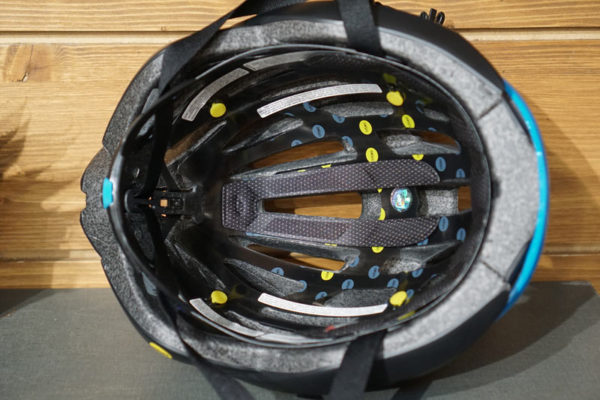 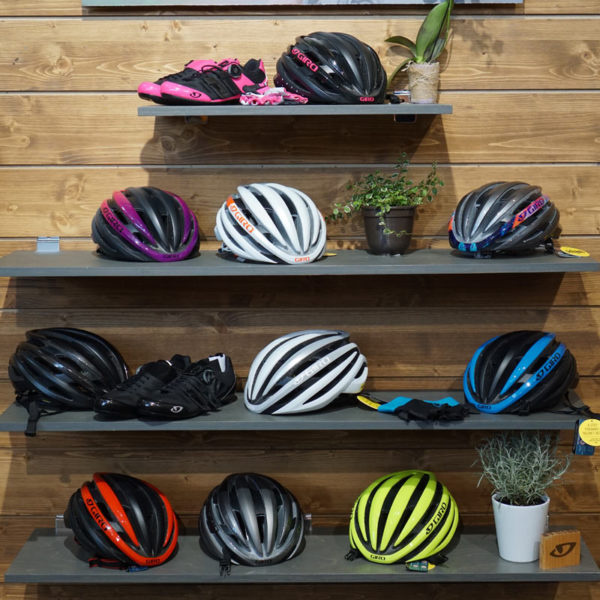 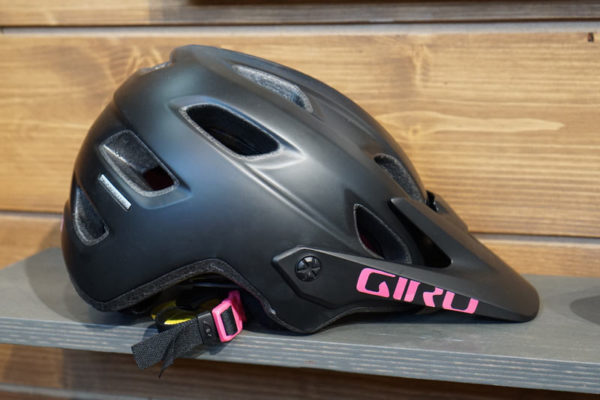 The Chronicle (men’s) and Cartelle (women’s) trail helmet provides deep coverage, a highly adjustable hood that tilts up a whopping 30º so you can get your goggles up onto the helmet underneath it, and 14 large vents. 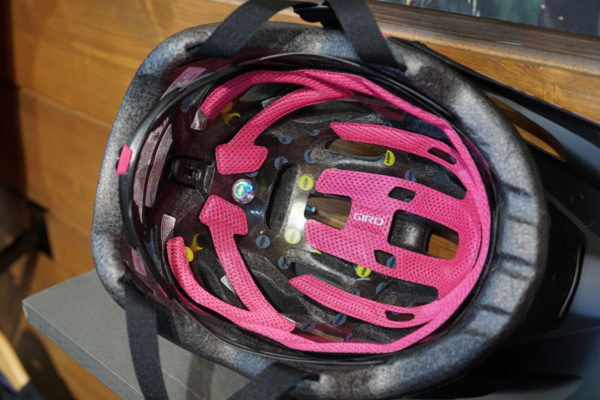 It also gets MIPS and lots of color options, but retails for just $100. 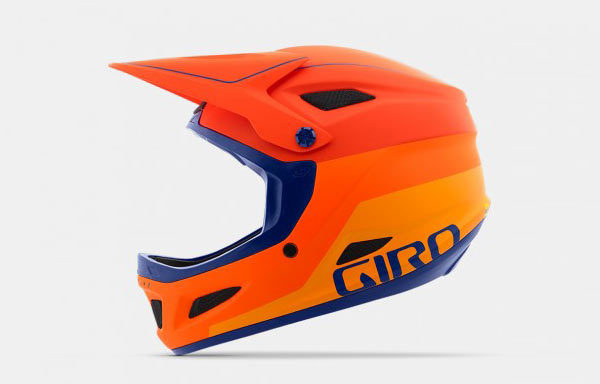 Giro introduced their Switchblade convertible half-to-full-face helmet at Crankworx, but for those wanting a dedicated full face helmet, the new Disciple takes over the top of their podium. It’s ASTM-1952 DH certified with a fiberglass shell that builds in vent ports and an integrated breakaway action cam mount. Inside are emergency removable cheek pads with vinyl nitride padding throughout the chin bar to cushion hard hits. Speaker pockets near your ears let you keep the tunes going without totally blocking outside noise.

The visor is adjustable and removable without tools, and brow vents help keep goggles from fogging. Add in MIPS and you’ve got a well protected noggin for $220 (€249 / £209). 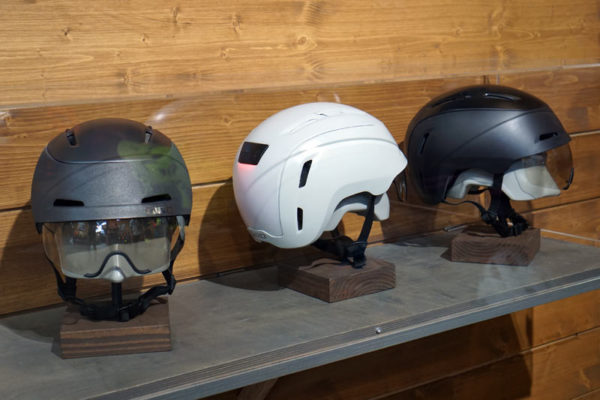 For commuters, the new Bexley MIPS combines an integrated tail light with a retractable, replaceable eye shield (good for higher speeds on e-bikes or in inclement weather).

One color option uses reflective paint, but all get the tail light inside the shell to make it glow. Removable ear pads keep you warmer in winter, and 10 vents (four of which can be closed) help you regulate temps the rest of the year. Retail is $250 (€/£TBD). 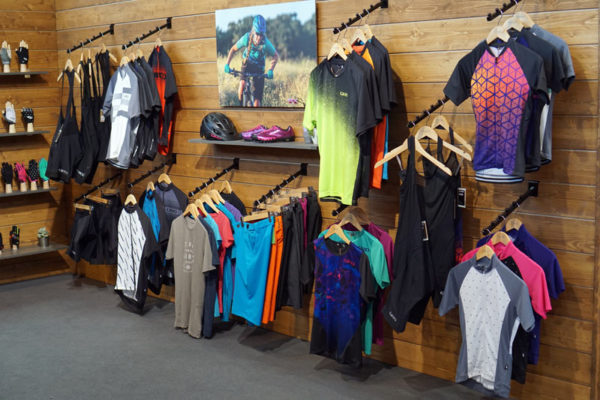 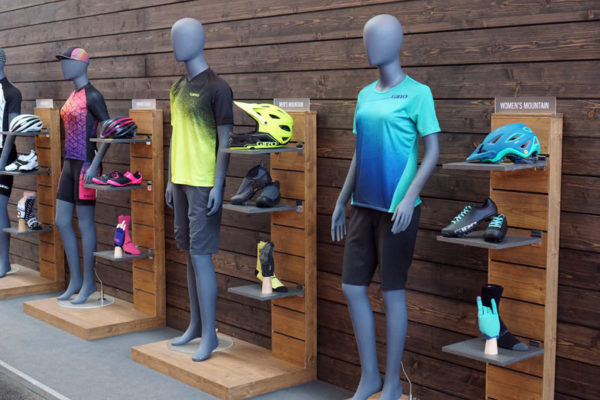 Giro’s clothing continues to impress, and the color matching for 2017 is above and beyond without taking it too far. Helmets, shoes, gloves and clothes are all coordinated very nicely. 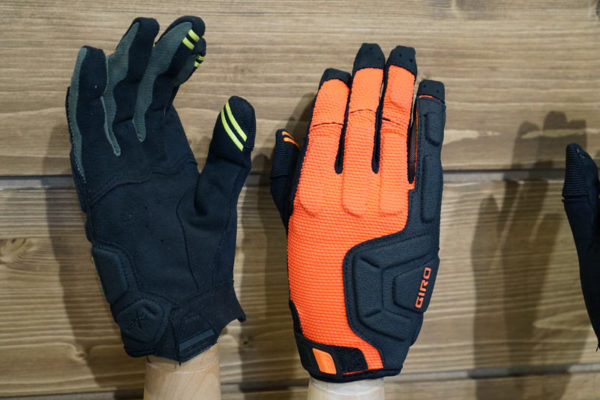 The Remedy X2 glove moves all padding out from under the palm, shifting it to offer additional protection on the outside of the hand. Poron XRD padding at the knuckle and palm keep you from banging up your fingers, and double stitched seams should help them hold up to repeated bail outs. The thumb and two first fingers get touch screen friendly material, too. Retail is $40, down five bucks from the prior model, and without the somewhat unnecessary dual Velcro closure system (but still my go-to gloves for big mountain days).

These new urban gloves are the D’Wool, based on the DND but with New Zealand MAPP merino wool. Retail is $30.

I’ve always wondered why mtb shoes have a heel on them (like a hiking boot). When I have to do hike-a-bike I’m always on the toes. The big treads on the heels always seem pointless. Anyone know why they make them this way? I thought it might be for riding unclipped (to keep from sliding forward off the pedal), but my current shoes have a minimal tread right behind the cleat that works much better than a big heel.

I wonder if you could remove the velcro/lace hybrid things and run straight laces like the empires? Of course, the important question is would it be lighter?

Those new shoes look HORRIBLE!!!! I can’t image they are better then 100% cable BOA shoes. Also the new remedy glove looks super chunky and uncomfortable, maybe they had to reduce the price so someone would actually buy these things….Guess I’ll have to wait till interbike to try…In any case I like the old Giro designs better.

Can’t wait to see the Bexley MIPS helmet in person. We love the face shields on our Giro Air Attacks. Much better all around vision and great for rainy weather. Just wish they offered the Bexley in Hi-Viz colors.