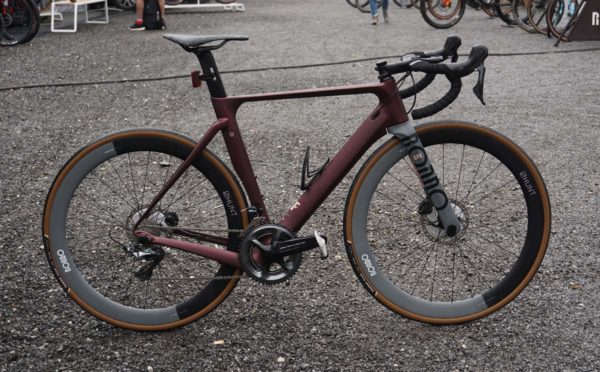 The Rondo HVRT aero road bike made its informal debut as a prototype last year, but now it’s ready to hit the road less travelled with just about any size tire. What sets it apart from other aero road bikes that can run 650b or 700c wheels and tires are the aerodynamic touches and the brand’s signature adjustable fork. That means it could be your crit racer, fondo bike and gravel grinder all in one. 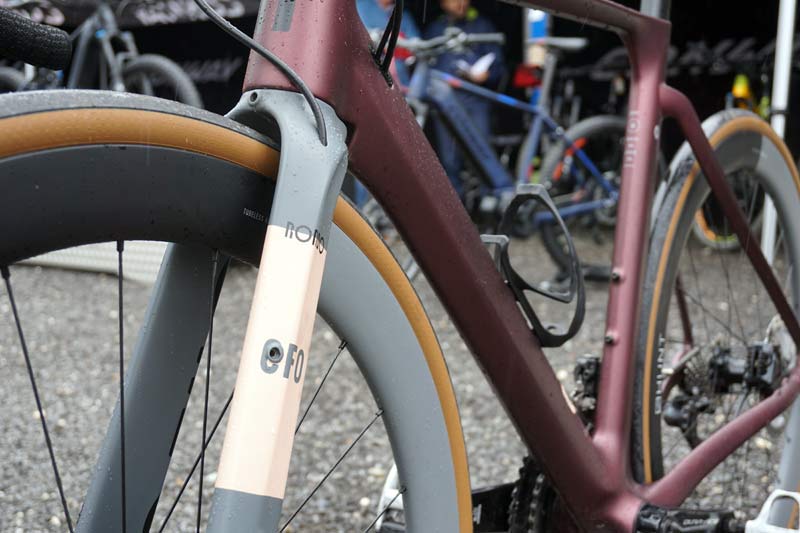 The HVRT has an aero frame with aggressive geometry that fits 700×30 or 650Bx47 road plus tires. In addition to tube shapes designed to keep the air flowing smoothly across it, the fork has a wide opening to prevent high or low pressure zones that could create drag. 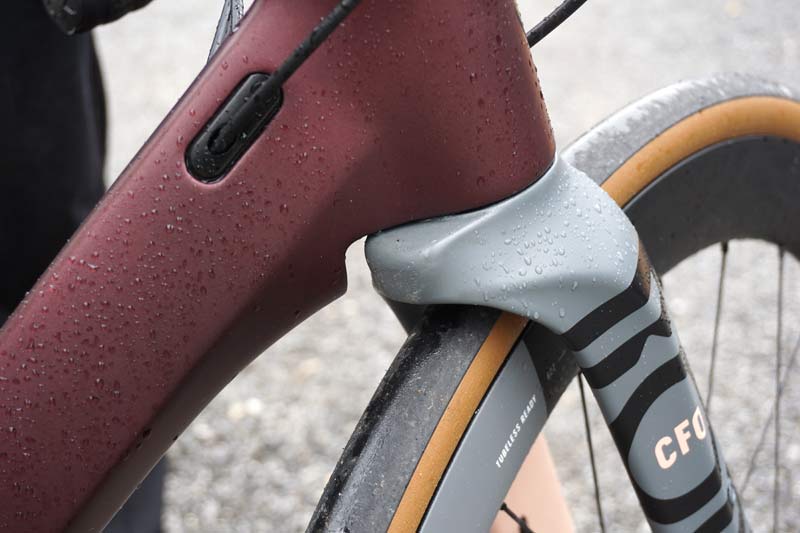 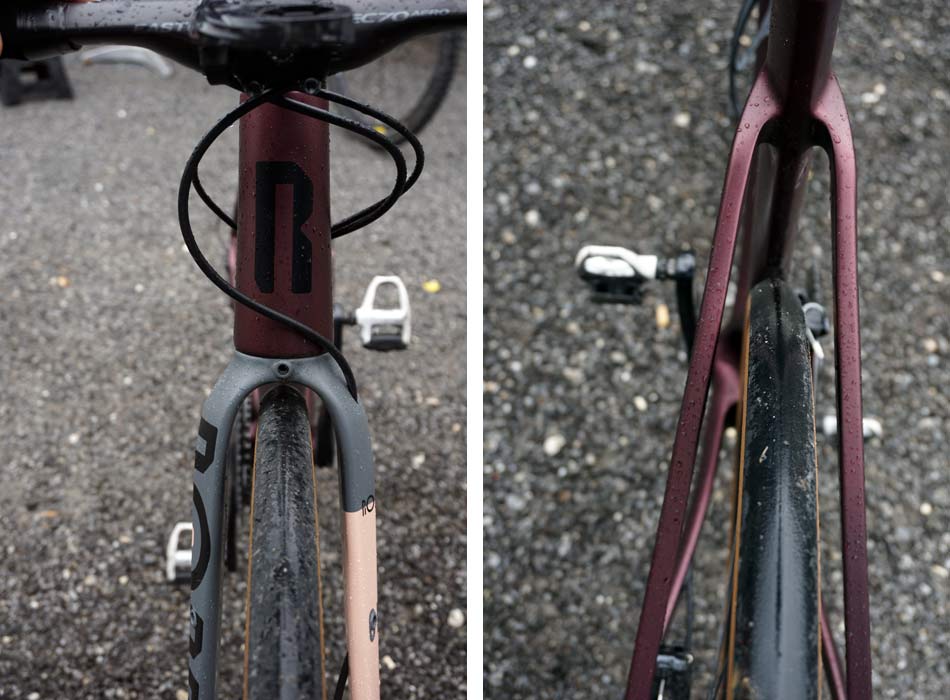 Their TwinTip fork lets you tweak the geometry to go between full race mode and more upright training mode. Note the fairing over the disc brake caliper…bolts on the front of the fork leg help with the install and setup since the caliper is hidden. 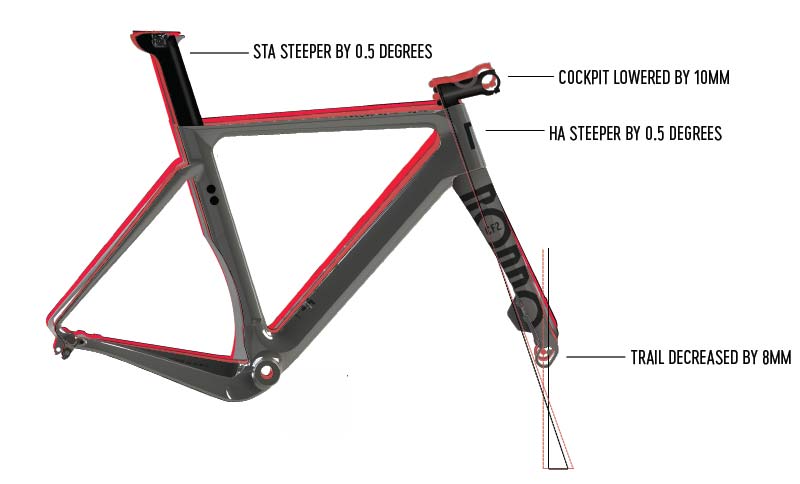 It’s still a sporty geometry in both, but they say the difference is noticeable. Raising the front wheel brings you more upright, raising the cockpit by 10mm. which also gives it a bit longer trail 8mm and 0.5° slacker head and seat angles. 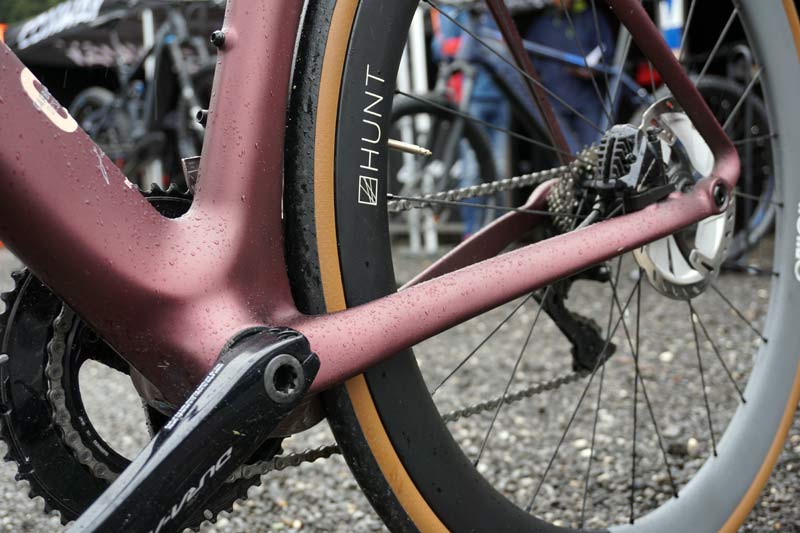 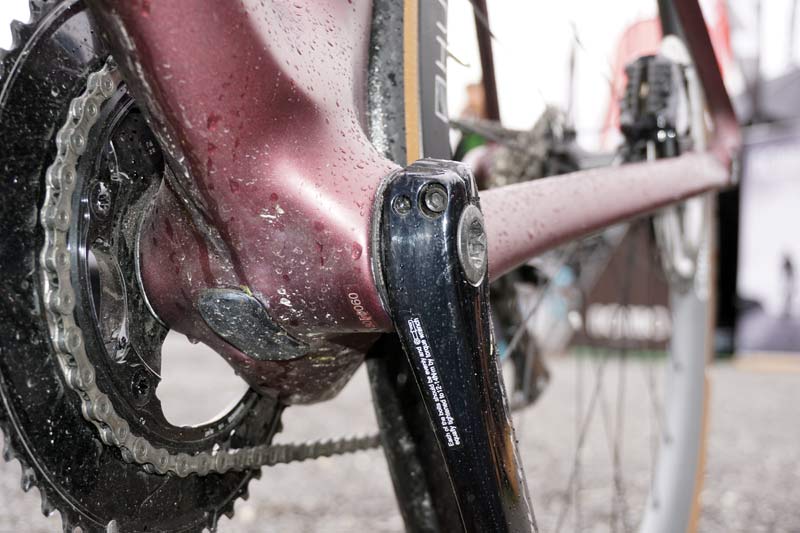 There’s a little vertical compliance in the stays, but mostly made to be torsionally stuff for sprinting. 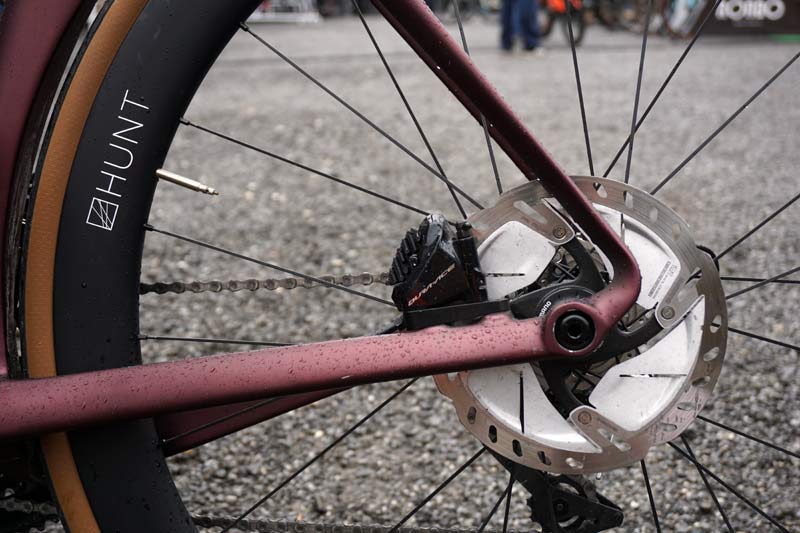 The HVRT carries many of the same design touches as their original RUUT gravel bike, but gets this clever new seatpost: 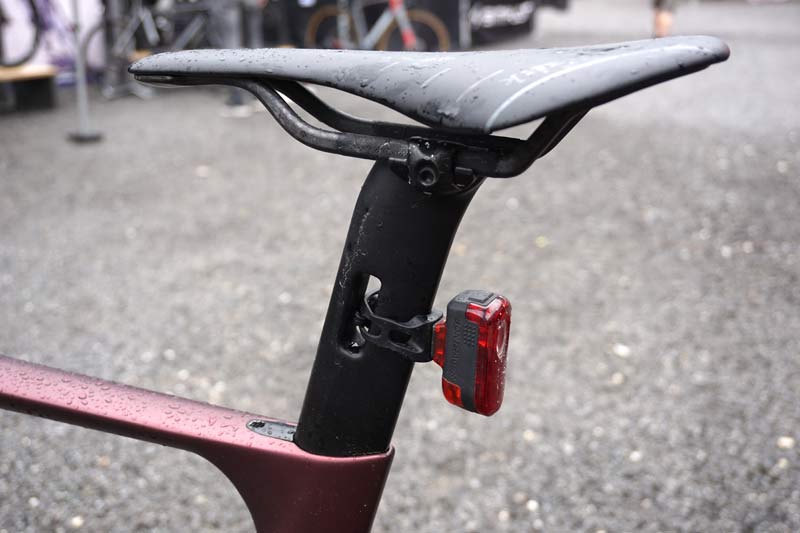 One of the problems with aero seatposts is how to attach a blinky light. They solved this by adding a slit in the center. 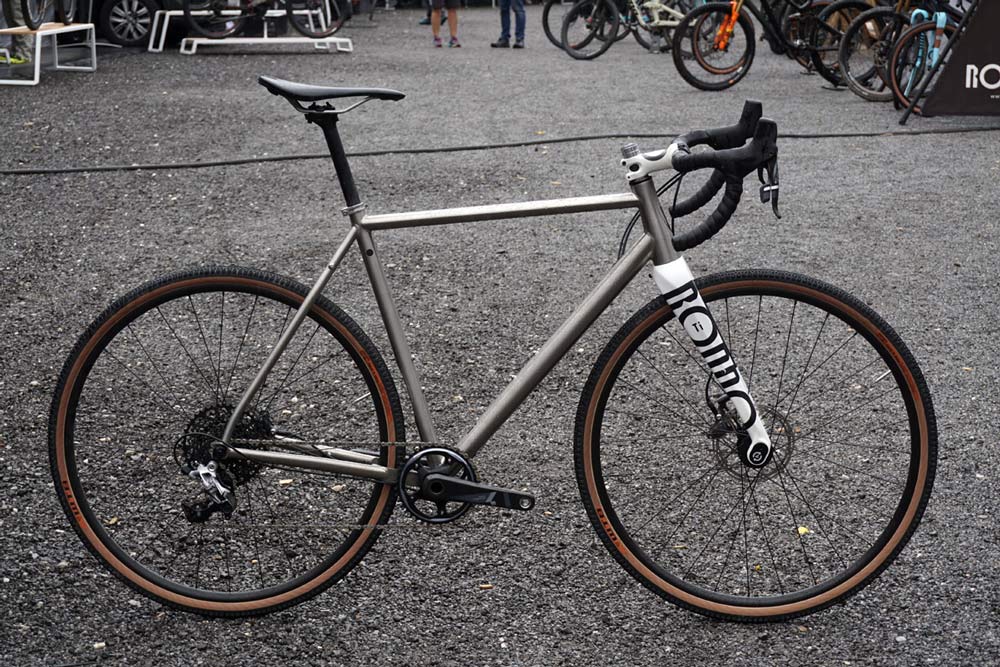 They’ve also added a new 3/2.5 titanium version of their original Ruut gravel bike, offered as a complete bike and a frameset. It has the same geometry as the carbon, steel and alloy Ruuts, but with the wonder metal that makes for good lifetime bikes. 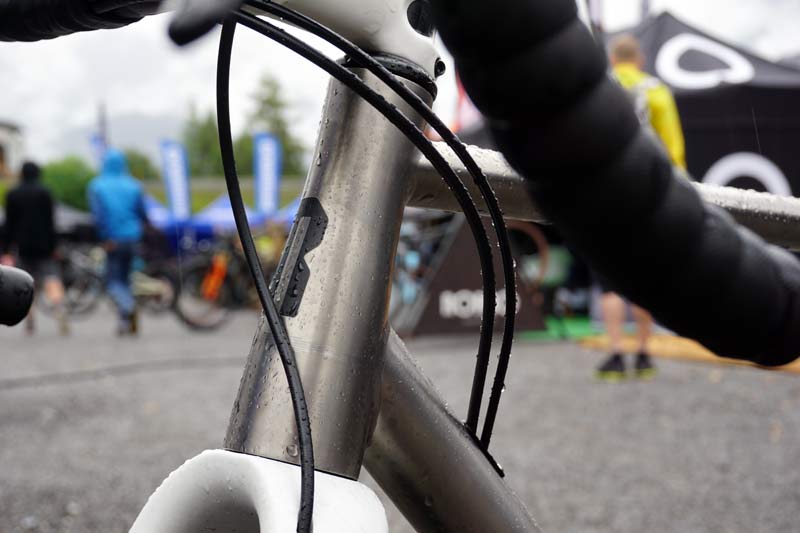 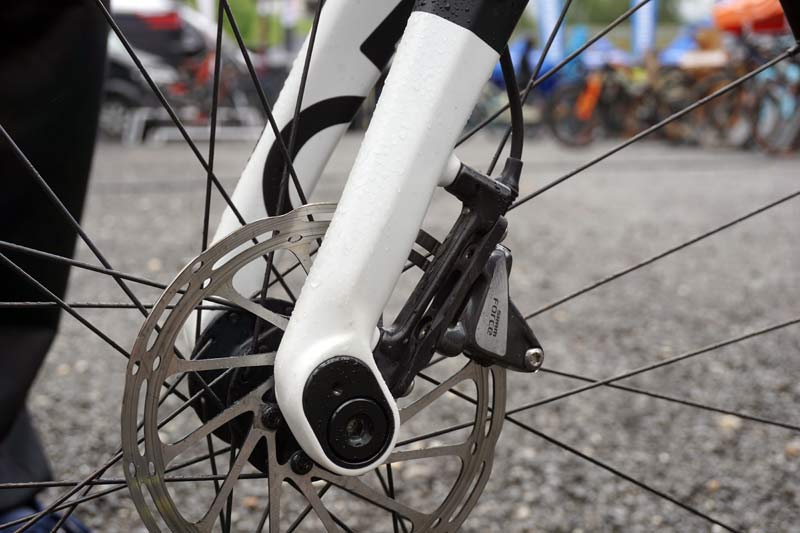 It, too, gets a TwinTip fork for adjustable geometry. 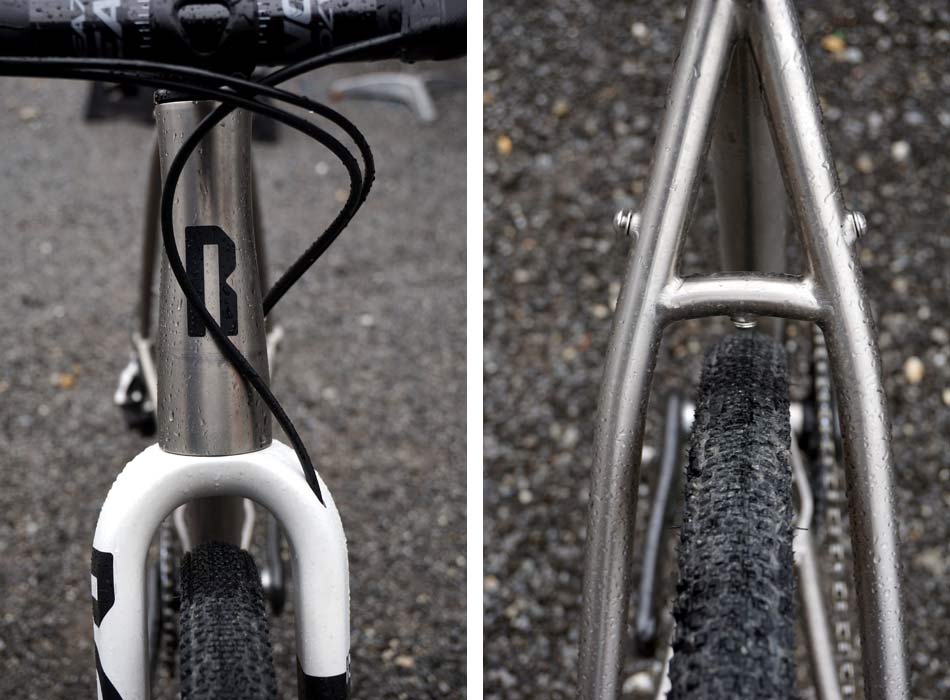 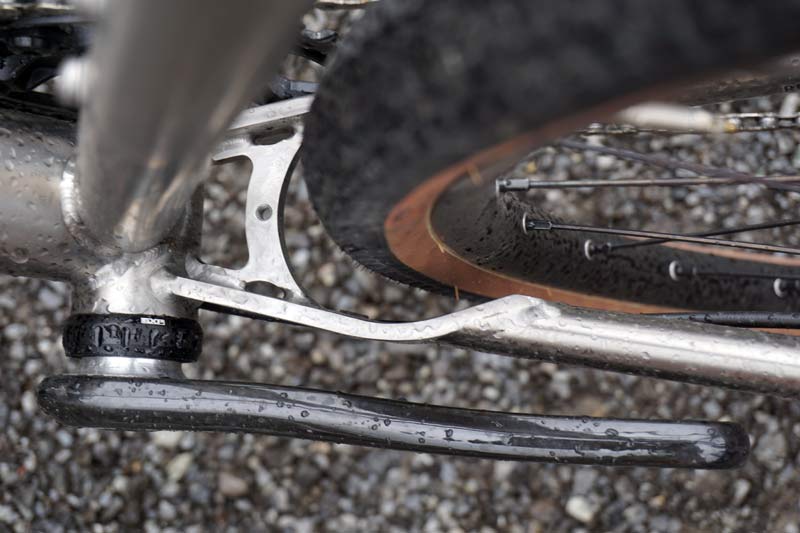 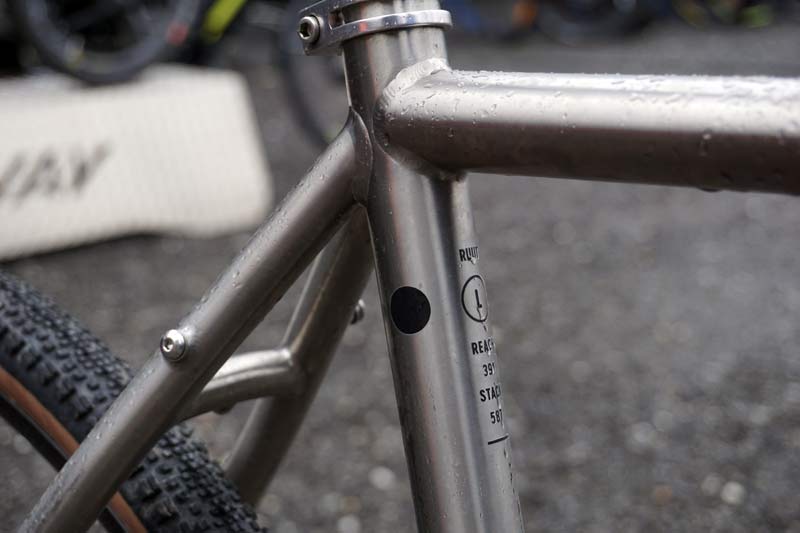 Fender and rear rack mounts open up more options for use, like fast commuting. 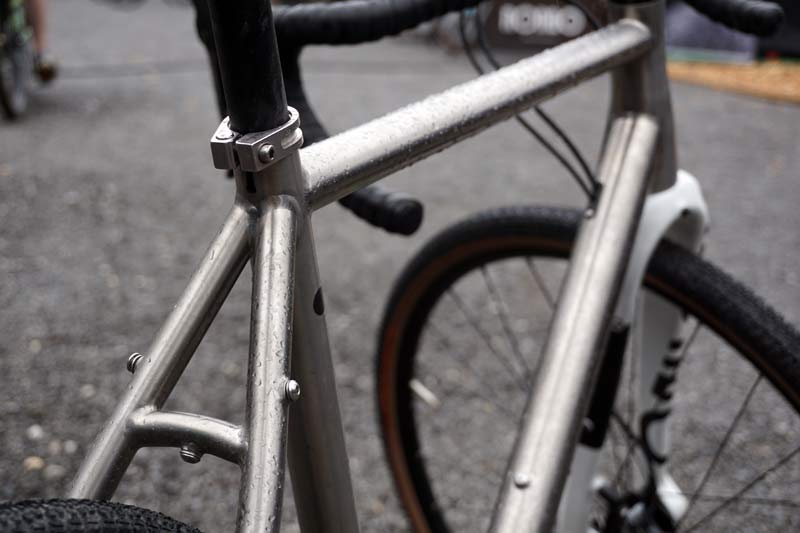 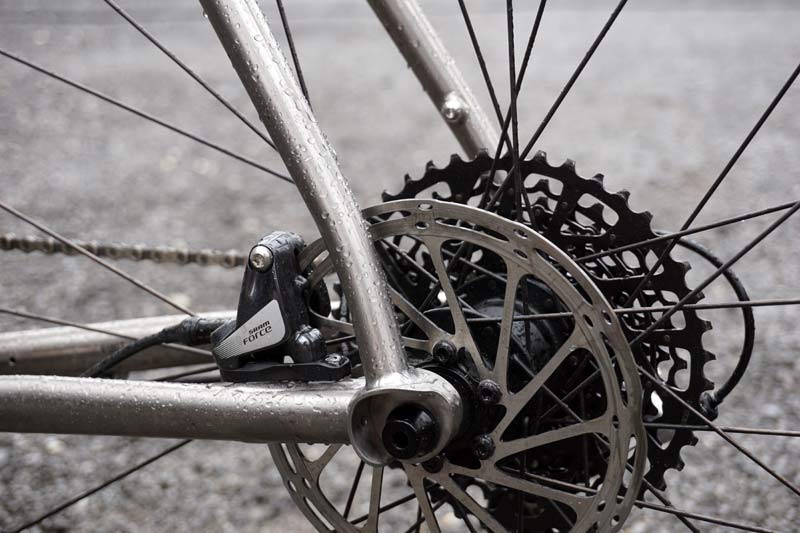 It’ll ship with the fork, thru axles and a carbon 27.2 seatpost for the frameset at €3,399. One complete bike will be offered with SRAM Force 1 for €4,899 For the carbon, steel and alloy models, there are more build options and new colors, including a full black steel frameset.

Not shown, the Booz is a new urban racer with aggressive geometry and road plus tires, belt drive and flat bars. It has a steel frame and a Shimano Nexus 7-speed internally geared hub.

Super nice guys too. Got to spend a lot of time talking to them at Interbike last year.

You would think that they would update their website with the new model.

I’ve been sorta looking for something like this: a generally aero road bike that would take larger tires for the occasional dalliance onto gravel via an extra set of tires (or wheels). Any other frames out there like this?

Though, while I sort of like the idea of the adjustable fork the same way I like the Ride 9 chip on my RM Altitude, it seems a bit gimmicky on a road bike (as well as a touch ugly…especially if it requires a caliper adjustment).

That housing bend on the RD. Woof

A versatile aero bike? Hmmm. This appeals to me a lot more than it should.

Genius idea on the hole in the seatpost for rear light mounting too.