The all-new e*thirteen XCX gravel wheels borrow a few tricks from their mountain bike lineup, but they introduce an insanely light 320g gravel rim, plus new lighter hubs and complete builds. In fact, the XCX Race Gravel wheels come in at a claimed 1,280g for the set!

The XCX Race Gravel? Just $1,599. Let’s take a look at how they did it, followed by first ride impressions and actual weights… e*thirteen entered the gravel market in 2019 with the XCX gravel cranks, which are also among the lightest available. Those, like the carbon rims here, borrow from their World Cup DH products, so they’re designed to take a lot of abuse. For these wheels, durability and strength were givens, but it was an ultra-low weight target that drove them to find new parts for the build. They say they looked at a couple boutique hub manufacturers in California (we’re guessing White Industries and Chris King?), but ultimately decided to build their own. The tricky part was finding the right bearings that fit a smaller hub design that were both light and durable. And it had to have a 6-bolt brake rotor mount because they didn’t want anyone getting stuck way out on an adventure ride because they couldn’t use their mini tool to tighten a rotor bolt.

Yes, Centerlock is awesome, but it can come loose and we haven’t seen a mini tool yet that solves for that. They’re also offering an alloy rim XCX Gravel wheelset that uses non-butted Sapim spokes and brass nipples. Claimed weight is 1,820g and the price is just $499 for the set.

Our test set came in at 609g front and 727g rear, with rim tape preinstalled. That adds up to 1,336g with XDR driver body. Considering e13 recommends two layers of tubeless tape, ~56g of tape for two wheels sounds about right. Their tubeless valve stems are more robust than regular ones, offering a dual tube design that makes it stronger. The larger girth of the outer tube and a hex-shaped opening on the bottom make it easy to get them nice and snug. One uses a standard cap, the other gets their valve core removal cap.

They weighed in at 15g for the pair, putting the total wheelset weight at 1,351g. To be fair, the other brand’s claimed weights are without tape and stems, too, so you can expect a similar 65-71g increase in ready-to-ride weights there, too.

The carbon rims are crazy light at just 320g (claimed), but measure a respectable 28mm deep with some level of aero-appropriate shaping. (Bontrager is 37mm deep, ENVE G23 is 25mm deep.)

What makes them interesting is how thin the sidewalls are at the top. It’s the first thing I noticed when pulling them out of the box, and it’s a notable departure from rims using a rounder, thicker top section to combat pinch flats and snake bites. Both the carbon and alloy rims have a 24mm claimed internal width. For reference, the Bontragers are 25mm, and ENVE G23 is 23mm.

Our test set came in at ~24mm wide internally, and ~29mm wide externally. Since they’re hookless, that means each sidewall should be ~2.5mm thick. Compare that with 3mm and ~4.3mm for the other two brands. Between weeks of rain here in North Carolina, I’ve logged a few rides on the wheels mounted to the Lauf True Grit…which is the bike they’re debuting on. More on that in a separate post soon.

Compared to the stock DT Swiss XR1501 wheels that came on the True Grit Race AXS build spec, I dropped ~250g of rotating mass by switching to these new wheels. That’s more than half a pound (0.55lb), which is a lot.

The difference is immediately noticeable in both overall bike weight and acceleration. They’re every bit as stiff and handle great, but much snappier under power. Inside, they have a very wide pawl-to-tooth interface that should handle torque quite well. The hubs have a claimed 6º engagement thanks to four sets of offset pawls, so we’re thinking only two are engaged at any time (we’re confirming, will update).

Their “floating” threaded axle system (see diagram here) makes it really easy to service the hub while also capturing the end caps so they won’t fall out when removing or reinstalling the wheel. And you can do it all with your fingers, no tools needed. 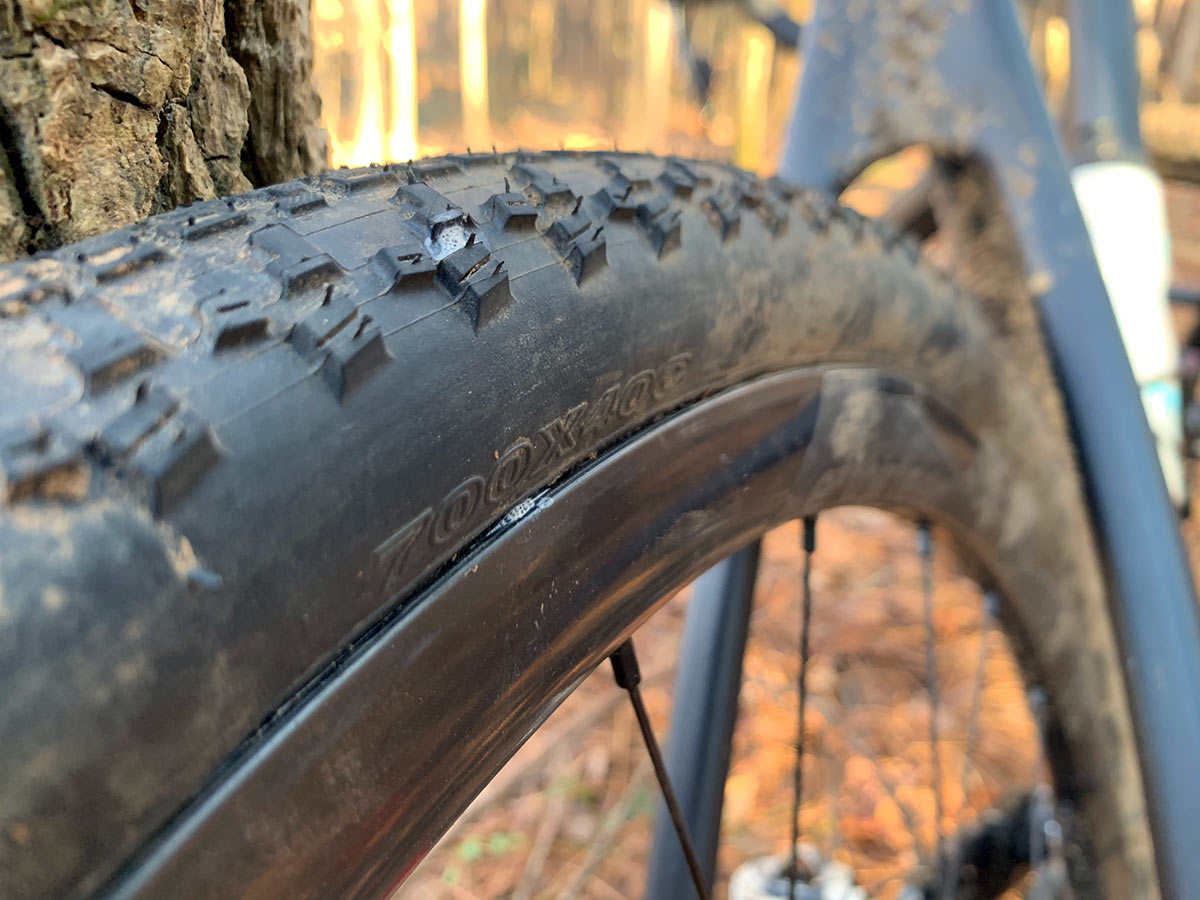 I tend to run lower tire pressures when testing rims and wheels for two reasons: First, to see how well the rim will hold the tire and if it takes any damage when hitting roots or rocks. Because, you know, product testing.

Second, because it’s more comfortable and provides better grip, so I try to see what I can get away with before feeling the tire squirm. Here, with the stock Maxxis Rambler 700×40, I got down to about 20psi front, 21psi rear before my fears were realized…pinch flat.

To be fair, these tires are a thinner 120tpi version that’s not listed on Maxxis’ website, where you’ll only find a 60tpi option, but they do have the EXO casing. Regardless, they got bit, leaving one slit just above the tire bead, and one next to a knob, neither closing up with sealant.

I don’t want to blame the thin rim wall entirely – I was looking for big roots to hit, but it happened. I’ll be riding these for quite a while, with slightly tougher tires and slightly higher pressures. Look for a follow-up long-term review later this summer.

In the meantime, the Lauf and e*thirteen folks have been riding them all over the world for 6+ months with no issues, so my takeaway is this: For a race like The Rift in Iceland I could see these being the perfect rolling stock. But maybe not Grinduro. If you’re not regularly bashing roots and rocks (or you run normal tire pressure) and want an insanely lightweight yet fairly priced carbon wheelset with a lifetime warranty, these are definitely worth a look.

Worth noting they say the spoke bed is thicker, and the rims are made with rigid bikes in mind, and mountain bike-style riding expected. Hence the lifetime warranty for rim damage.

Also – “Centerlock is awesome, but it can come loose…” – if one does it properly, that thing will not come loose for years. Mounted CL rotors 3 years ago on my fatbike and not touched it again ever since.

Designed their own hubs, and this is v1? I’ve seen this movie a few times before. I’ll wait for the beta testers to work out the kinks by v2 or v3.

Aaron Gwin (DH world champion) rides eThirteen wheels – they definitely know what they are doing. I actually have their XCX carbon gravel cranks too – they are great.

Wait, Pulstar is still around??

I’m drooling over that True Grit! and E-13 usually knock it out of the park with their product development (imo).

“And it had to have a 6-bolt brake rotor mount because they didn’t want anyone getting stuck way out on an adventure ride because they couldn’t use their mini tool to tighten a rotor bolt.”

I have an instinctive dislike for 6-bolt.

That’s kind of cool. They advertised other gravel wheels for the last year or two, but never offered them in anything other than boost hubs. Hopefully these wheels actually come to market and the hubs hold up.

…is very compact and works well for removing or fitting CL lockrings; I use it in conjunction with one of these…

…which is good for pedals too.

“Insanely Light” – but heavier than a couple of different Stans rims that have been around for a while. I built a set of wheels with the Grail rim, those were 290G actual weight.

Strange choice of rotor interface going with ISO considering their main focus was weight, and not to mention every single gravel/road group set out there comes standard with CL anyway. Head scratcher for sure. Every once in a while some of these mfg’s really pull some Bizarro World stuff.

Genuinely curious to hear about these centerlock rotors that are coming loose… if e*thirteen want to go with 6-bolt power to them, but the rationale sounds a little goofy.

Fully agree,
in my opinion 6 bolt is the way to go for a lightweight setup, works flawless on hundreds of millions of MTBs, offers countless rotor options and is probably available even in Tadschikistan or any other third world country at the other end of the world, but a loosening CL-Rotor….that’s something i have never heard of since 2002, when Centre Lock was first introduced.

It makes absolutely sense to go with the lightest possible option if lightweight is your KPI, why not simply state that?