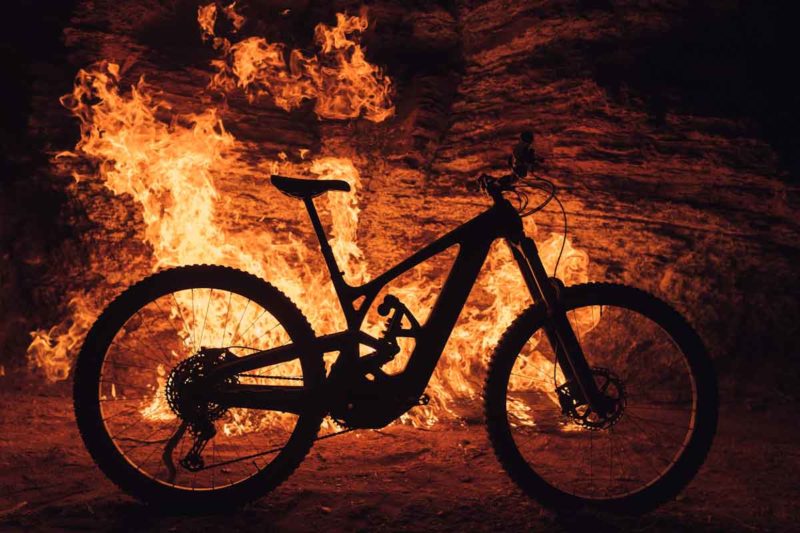 It’s hard not to crack an evil smile when motoring by non-assisted riders on a climb, isn’t it? The folks at Evil Bikes have been experimenting with this schadenfreude for the last few years, and they’ve just unleashed the Epocalypse!

Evil’s first electric offering, the Epocalypse eMTB is based on their long travel Wreckoning 29er, but with an insidious dose of power on tap. The Epocalypse features a full carbon frame, 166/170mm travel, 29” wheels, Shimano’s EP8 drive system, and a new eMTB-specific handlebar from Evil themselves.

A few weeks ago I got the chance to ride the Epocalypse in Evil Bikes’ hometown of Bellingham, Washington, so be sure to check out my ‘first ride’ impressions below. 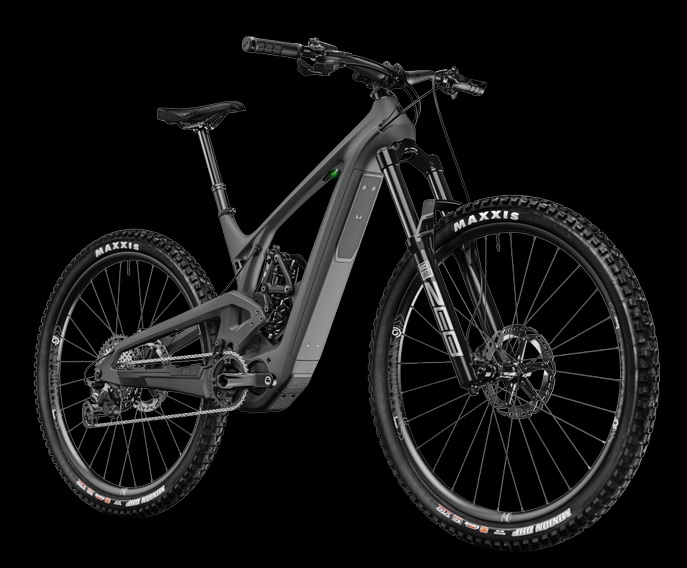 The Epocalypse is only produced as a full carbon frame, which has 166mm of rear travel mated to a 170mm fork. The bike rides on 29” wheels, and sorry MX/mullet lovers but it is not intended to run a 27.5” rear wheel. 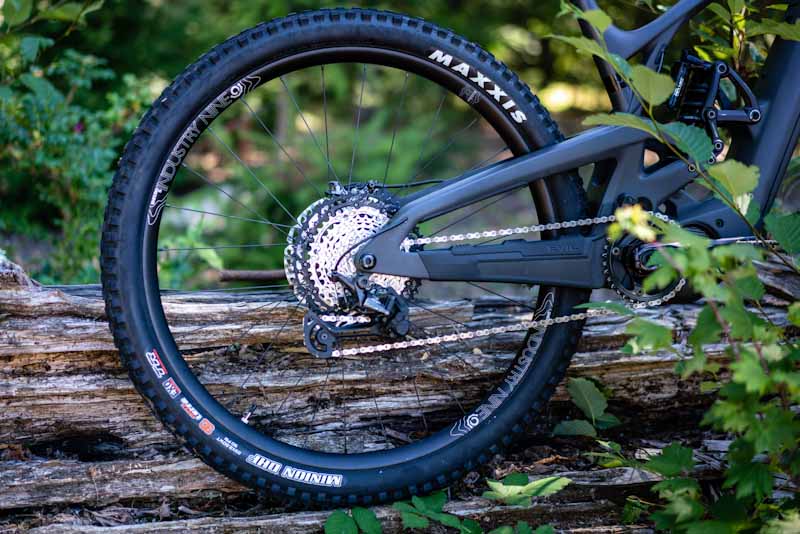 Designed by Dave Weagle, the DELTA suspension linkage offers a dual progressive rate curve that was developed for coil sprung DH bikes. The compact linkage aims to provide a supple initial stroke, maintain solid traction through the mid-stroke, and significant ramp-up at the end stroke to offer a bottomless feeling. This linkage leaves plenty of tuning room for different terrain or shocks, so you can run an air shock if desired.

Evil wanted the Epocalypse to have a clean look that integrated the electronics as subtly as possible, so the power button is neatly hidden on the underside of the top tube. The motor isn’t concealed, but it was positioned very low in the frame to ensure good stability. 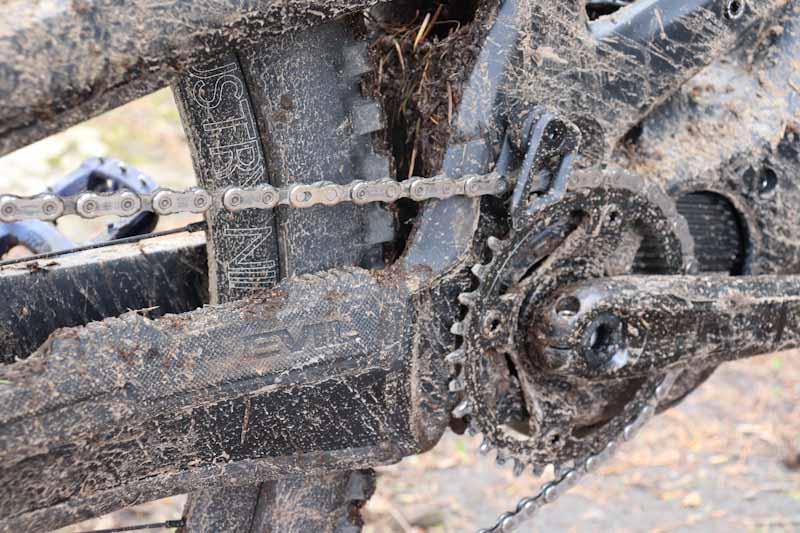 Notice how close the rear tire is to the motor? There’s no bridge between the Epocalypse’s chainstays.

The Epocalypse’s rear end was kept as short as possible, so Evil revised their rear triangle with a new split-yoke chainstay design. Where their non-electric bikes have a yoke at the front of the chainstays, the Epocalypse cuts that piece out to get the wheel closer to the motor. This allows for 442mm chainstays, while the width of the SuperBoost+ rear end provides ample clearance for 29×2.6” tires. 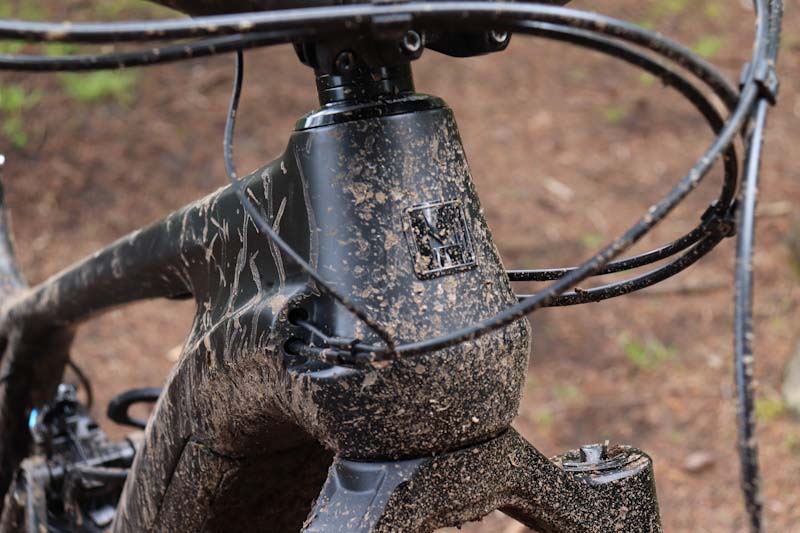 The Epocalypse offers internal cable routing, with internal guide tubes for easy maintenance. The frame accepts 30.9mm seatposts, can run up to 36t chainrings, and has one water bottle mount in the front triangle. Evil has adopted SRAM’s UDH derailleur hanger, which is widely available and easy to replace.

As for protection, the Epocalypse features a skid plate for the motor that has rubber padding and drain holes to keep water out, a shuttle guard on the downtube, and chain protectors on the chain and seat stays. To keep the ride quieter, the proprietary upper chain guide is lined with silent rubber. 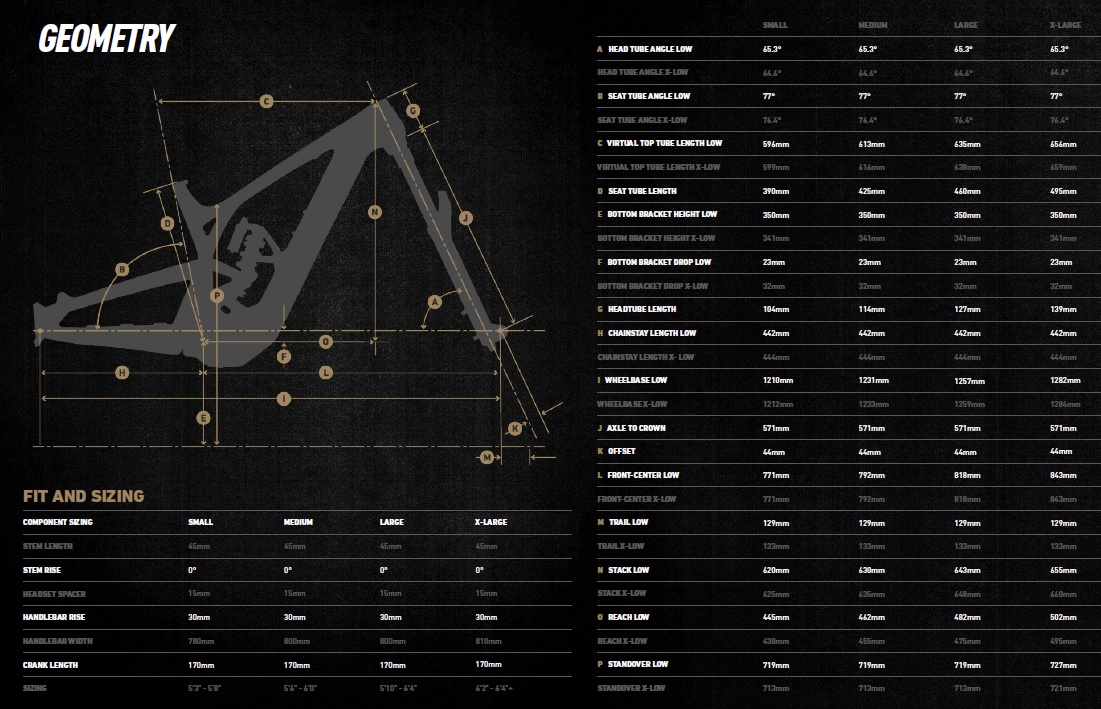 Evil’s Epocalypse is up-to-date with today’s frame geometry but does not go to extremes with its angles or dimensions. The frame offers a generous but reasonable reach (462mm for mediums, 482mm for larges), fairly slack steering, a low BB, and the stubbiest possible rear end. 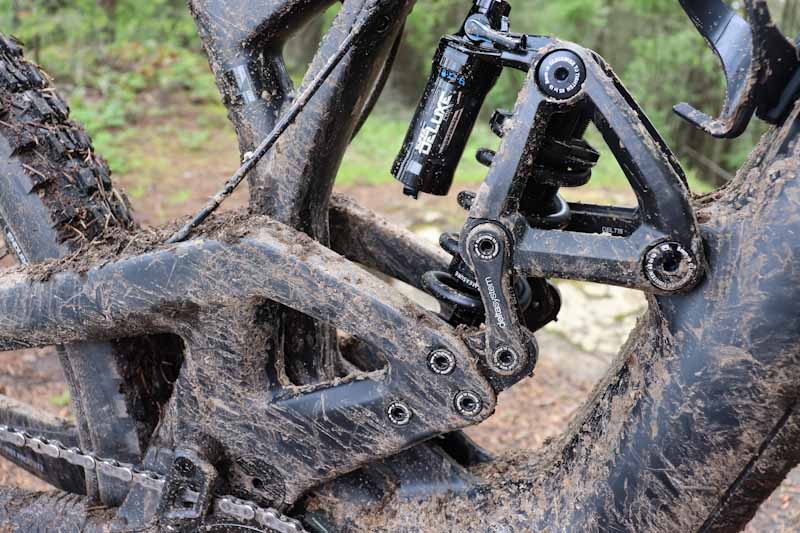 The chips at the bottom of the dogbone links flip to offer Low or X-Low positions.

The frame also includes a flip-chip that offers Low and X-Low positions. Flipping the chip makes no change to the bike’s suspension curve, but it alters the geometry in a few ways; Most importantly, it slacks out the head tube by 0.7° (from 65.3° in Low to 64.6° in X-Low), changes the seat mast angle from 77° to 76.4°, and lifts/drops the BB by 9mm.

Flipping the chip also adjusts the frame’s reach by 7mm, and the chainstay length by 2mm. Evil claims the Epocalypse has the shortest chainstays of any eMTB available at 442-444mm (across all sizes). See the chart above for all other geometry figures. 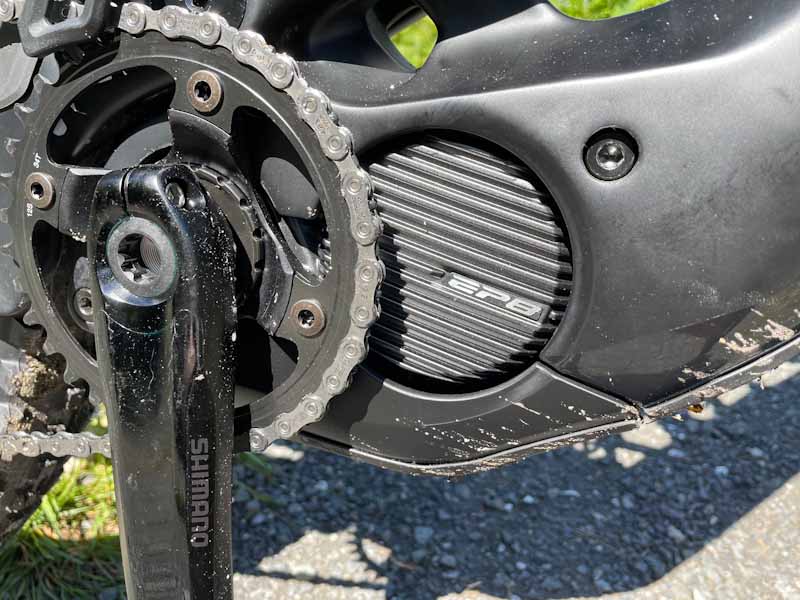 The chosen one for the Epocalypse’s powerplant was Shimano’s EP8 system. The EP8 motor puts out a maximum 85Nm of torque, and this bike runs Shimano’s 630Wh battery. The EP8 system offers three power modes (eco, trail, boost), and a ‘walk’ function.

The EP8 system’s cockpit consists of a compact handlebar remote on the left side, and a small display unit sitting on the right side of the stem which shows your battery life, assist level, and other ride metrics. The Epocalypse’s battery hides in the downtube, and is easy to remove for quick swaps; the battery door features a quick-release mechanism that can be opened with a 4mm Allen key. Fully charging the battery takes 6 hours. 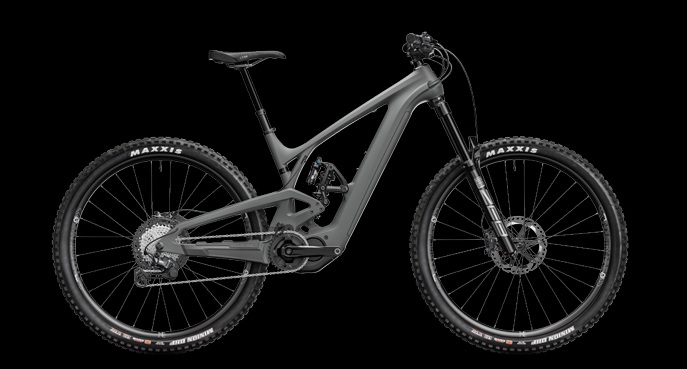 Keeping things simple, Evil is only offering the Epocalypse with one build kit – The Rockshox XT I9 Hydra. As the name suggests this kit features a Shimano XT drivetrain (though not the new XT Di2 group with automatic shifting), Rockshox suspension (A Zeb Ultimate fork and a Super Deluxe Coil Ultimate rear shock), and Industry Nine’s Enduro S Hydra wheelset.  The bike is also only offered in one color – Wasabi Shadow. 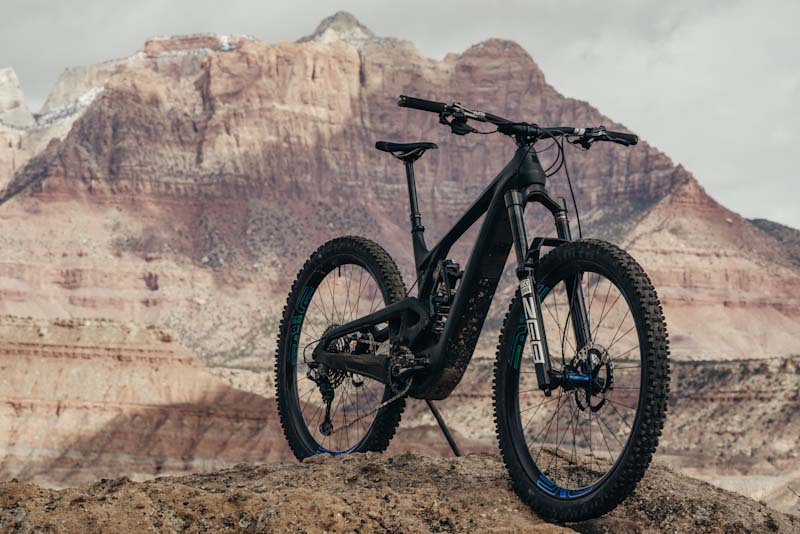 One unique component on the Epocalypse bikes is Evil’s new Energy Bar. Boasting internal cable routing for the controller and display, the carbon Energy Bar keeps your eMTB cockpit clean. The bars feature an 8° backsweep, a 5° upsweep, and can be run from 760-810mm wide. Evil sets up the small Epocalypse with a 780mm bar, runs 800mm on M/L, and goes to 810mm on the XL’s. All sizes of the Epocalypse come with Evil’s 45mm 12 Gauge stem.

Other notable components include a set of 2.5” Maxxis Minion DHF EXO TR tires, a Bike Yoke revive dropper post (125mm for small, 160mm for medium, 185mm for L/XL), and a WTB Volt saddle. One nifty option Evil offers buyers is an angle adjust headset. If desired, Evil will pre-install and ship your bike with a Works Components 1° or 1.5° angleset. 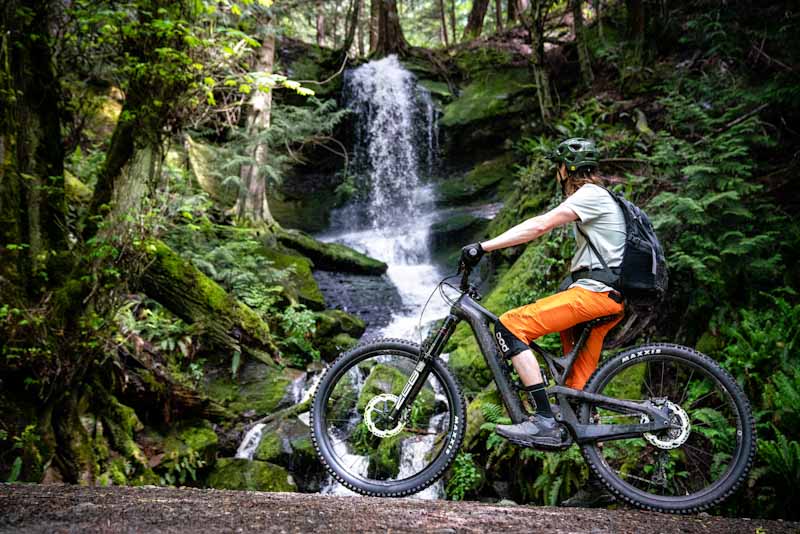 I only had one day to shred the Epocalypse around Bellingham, WA’s excellent trails, but myself and my host (Gerow from Evil Bikes) rode until our batteries were nearly dead.

Right away I found the medium frame’s geometry comfortable for me (I’m 5’10”). My demo bike was set up in Low mode, and I really liked the reach at 462mm. The steering angle was certainly slack enough for Bellingham at 65.3°, and the BB height offered a stable feel without me clipping pedals all over the trails. While Evil did their best to keep the rear end short, I can’t say a 442mm chainstay with a 29” wheel feels that stubby… the bike is no slouch in corners, but overall it feels like a pretty large bike with a lengthy wheelbase. At high speeds this stability feels great, and this bike’s geo and stiff ride encourage you to ride full-tilt. 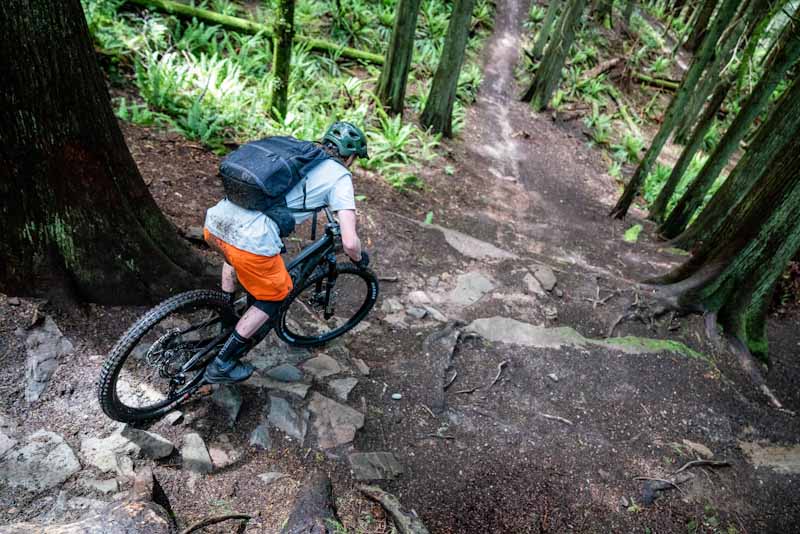 After a lap or two, myself and Gerow both agreed the Epocalypse frame feels stiff and solid. With that one-piece Superboost+ rear end the bike descends like a DH bike, plowing straight through rough sections with ease. Its generous amount of travel doesn’t hurt either, and I would agree that the linkage’s ramp-up provides that bottomless feeling Evil claims. I noticed landings from jumps and drops felt soft and slow, and the bike also rounded off sharp hits quite nicely. The stock coil shock seems like a good choice to emphasize this monster-trucking bike’s descending capabilities. 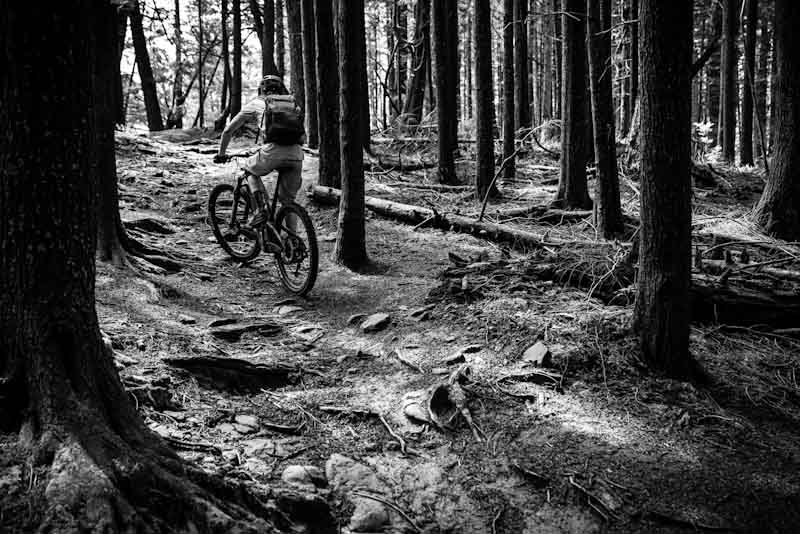 As for climbing and traversing, the Epocalypse does an impressive job of resisting pedal bob even without the shock in its climb position, so you can enjoy a comfortable ride or maximize traction when needed. As the linkage intends, the bike climbs smooth terrain without wallowing deep into its travel. I left the shock open for most of the test ride, and shot up a few rough climbs without ever losing traction. 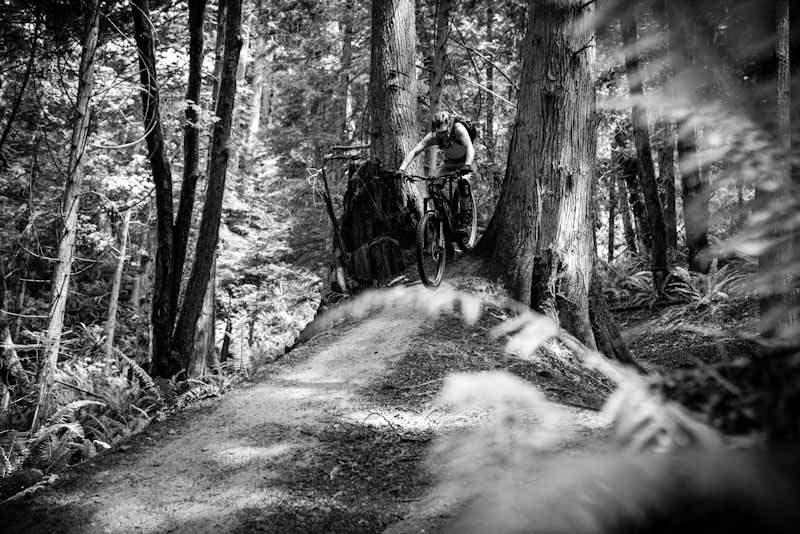 The rear end has a nice tendency to deaden trail impacts but not give up all feeling from the ground below. It smooths out small chattery bumps really well and does have good mid-stroke support for bursting out of corners, but the inherent weight of the electrified bike (50lbs for a medium) does kill some of its pop on bumps and jumps.

I was impressed with the output power of the Shimano EP8 motor (especially since I’ve ridden Rocky Mountain’s eMTB’s which have more torque). Eco mode is fine for traverses or mellow climbs, but jumping to Trail increases the power quite a bit. The Trail mode’s output is ample to cover nearly anything, and would likely be the most used setting for most riders, but Boost mode ramps it up considerably again to tackle the steepest pitches or fastest laps.

I was pleased to find the EP8 motor was fairly quiet while operating, and I liked Shimano’s simple handlebar remote. As for battery life, we rode several climbs and descents over four hours, and that almost drained the batteries on both bikes. 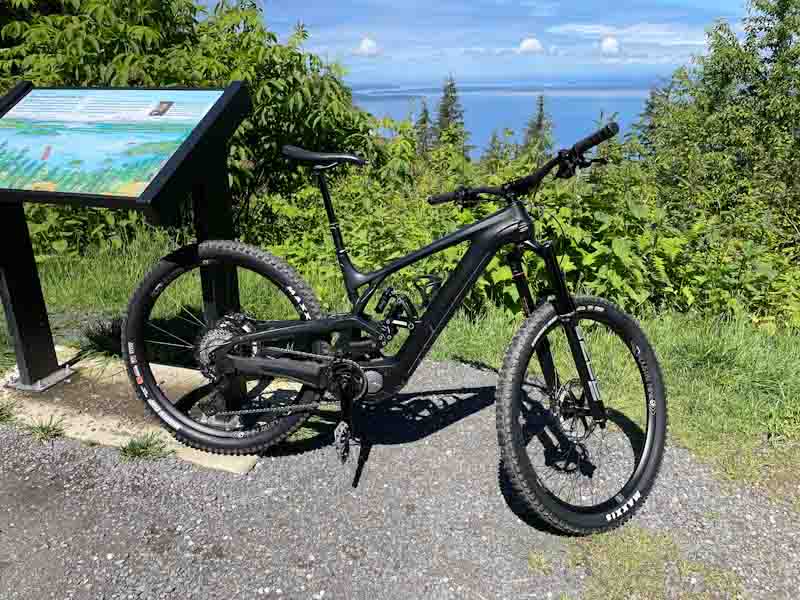 Given my one-ride experience, I don’t have much to say about components except that the four-piston Shimano XT brakes were great, offering ample power for an ebike. Aside from that Evil has loaded the Epocalypse with a high-end Rockshox suspension package, a solid wheelset/tire combo and a proven XT drivetrain. As you’d hope, I had no functional issues with any components during my test ride which should be a requirement at this price.

Ebike haters running low of options if they refuse to buy from any company that supports ebikes by selling an ebike themselves.

Jonathan
Reply to  whatever

My amigo rides a 2018 Evil Insurgent and is mostly joking about being anti-eMTB. But he HAS joked that likes Evil because they haven’t jumped on the eBike wagon. I will be rubbing this in his face.