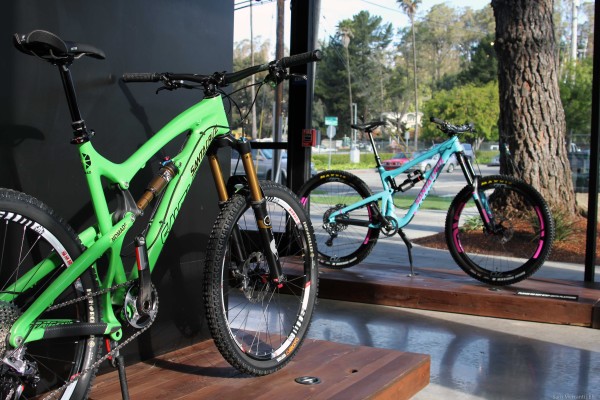 When we arrived, the mean green Nomad 2 C was sharing its last few moments on the showroom floor with the new Nomad 3.

After staying up late to glean through a press release and bring you detailed coverage of the new Nomad, I woke up bright and early to visit the Santa Cruz Factory and take some pictures of the bubble gum pageant queen. While at HQ, we had the opportunity to discuss the bike with both Marketing Manager Will Ockleton and Sr. Engineer Nick Anderson.

Drop past the break to check out some pretty pictures and learn even more about the new bike! And in case you missed it, here’s our initial coverage with a Q&A from Engineering and Quality Director Joe Graney. 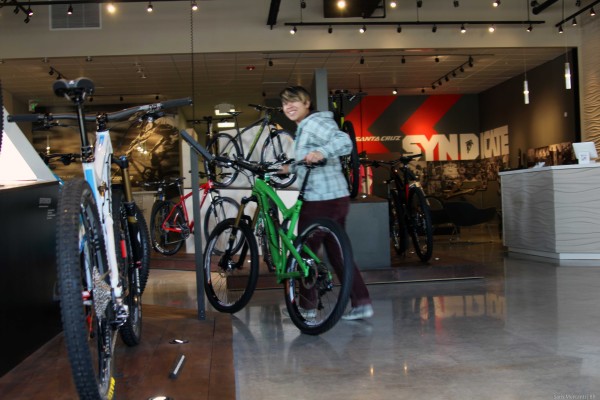 We had barely gotten our camera out when SCB Receptionist Maggie slipped off with the Nomad 2 that had been on display on the factory floor. As they say “the king is dead, long live the king!” and then we turned our attention to the new Monarch. 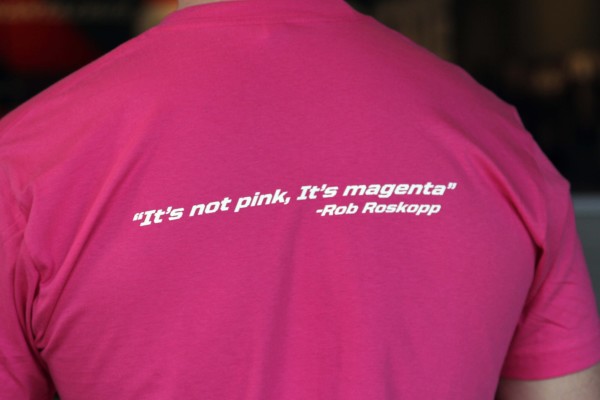 But before we started snapping away, Production Coordinator Ryan Heywood stopped by with an important message from Rob Roskopp. 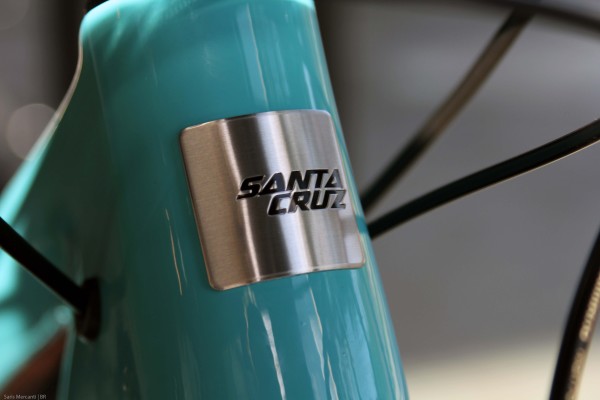 At the head of the bike you’ll notice an all new headtube badge. The simple logo will likely adorn future models. R.I.P. S-man. 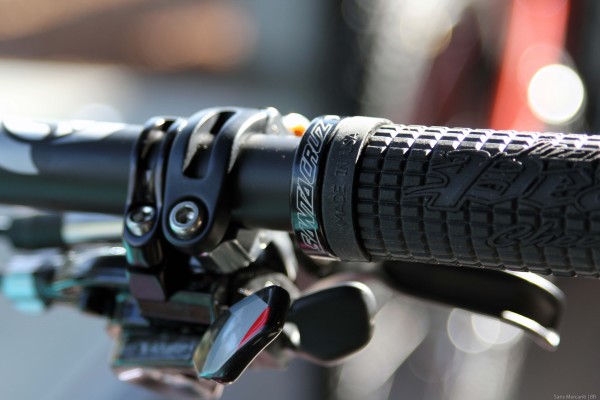 Peaty grips are matched to custom SC lock on grips. Its the small details like this that really make the bike stand out when you get up close. 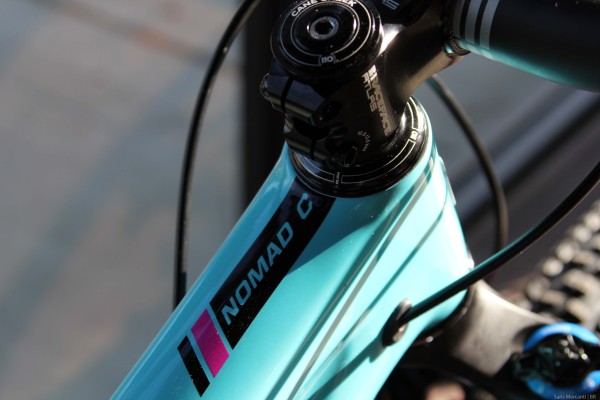 Earlier today we called it “internal routing,” but just like Joe Graney’s “bus” there’s a lot more than meets the eye. Santa Cruz has a reputation in the service department for being some of the easiest bikes to work and they refused to buckle to the internal routing trend until they could do it right. Their implementation allows you to turn the bar completely without generating cable rub.

They’ve achieved this by crossing the rear derailleur cable and running it on the left side of the headtube, while the Reverb Stealth port is located on the right. The molded carbon fiber tubes eventually cross, but carry the housing to their respective destinations without interruption. You may think I’m putting a lot of emphasis on how awesome this routing is, but anyone who wrenches on bikes will understand and share my enthusiasm. 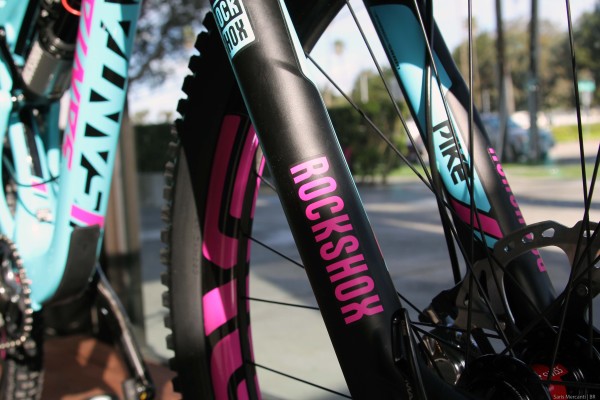 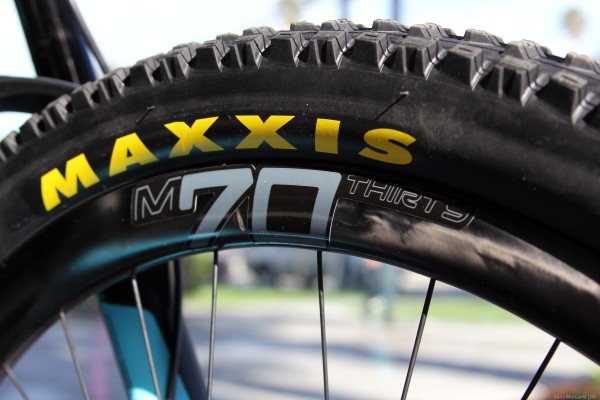 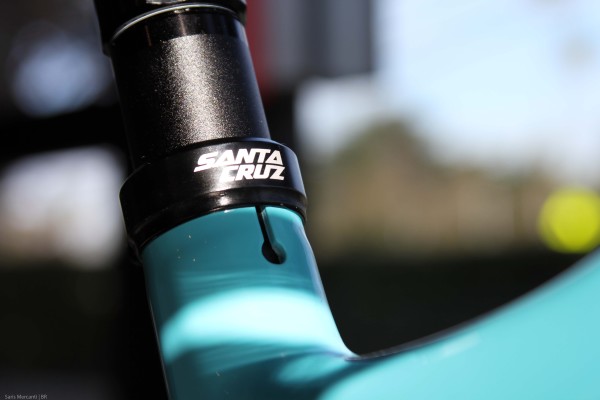 In order to make this giant beast of a bike friendly uphill, Santa Cruz has made several important changes to the ‘Mad. The one you’ll most easily detect is the change in seatpost diameter due to the new seatpost clamps. Due to the low standover on the smaller size frames, the team wanted a seat tube that was long enough to accommodate a 6″ dropper post, so that small riders could get the seat low enough. The only droppers available in that length require a 31.8mm diameter, so the new model now features a larger seatpost tube than the other full suspension bikes in the catalog.

The seat tube angle was also made steeper because the more travel a bike has, the more weight you put on the rear suspension as you climb. So as you start uphill, the bike sits further into its sag, which causes the front end to wander. By steepening the seat tube angle and increasing the reach of the bike, you place the rider in a better position over the BB when negotiating hill climbs. 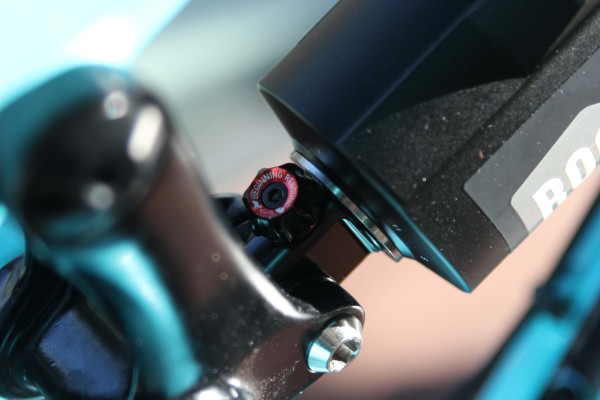 As part of the move to make the bike more pedal friendly, the team created an upper link that would allow them to shorten the seat tube so you could fit a longer dropper. 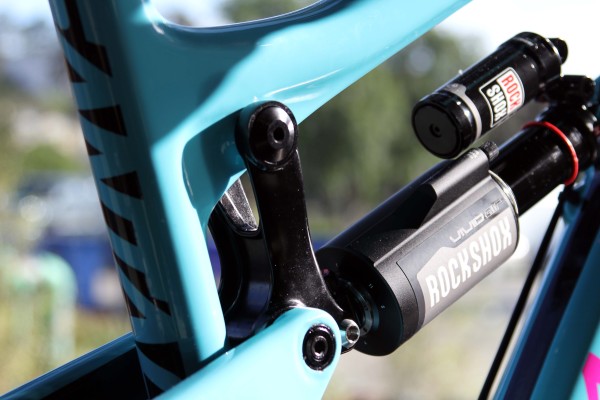 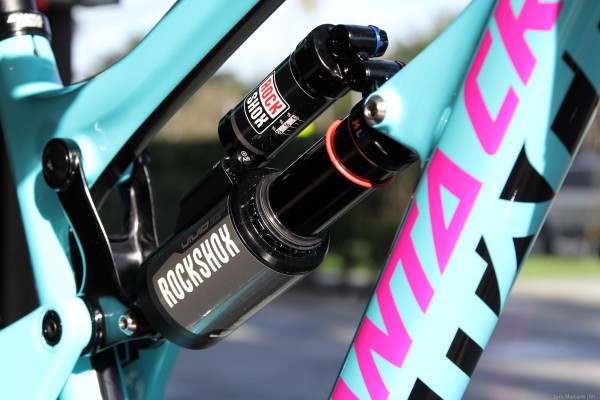 Both the shocks that will be spec’d on the Nomad, the Vivid Air and New Monarch Debonair,  have a stiff negative spring that works well with the progressive nature of VPP suspensions and offer a very supple feel at the top of the stroke. 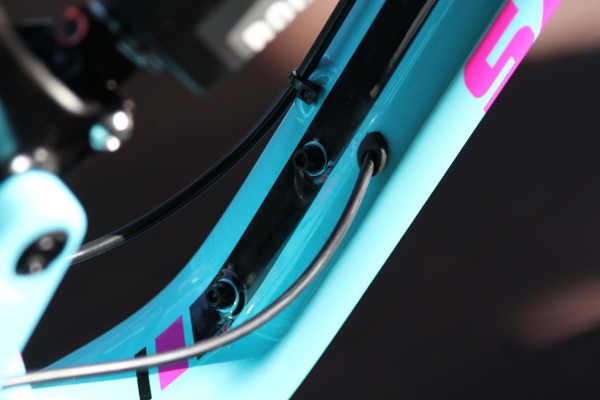 Hydration bag haters rejoice. If you lust after this bike, you won’t need to resort to a fanny pack or fancy bib to carry water. 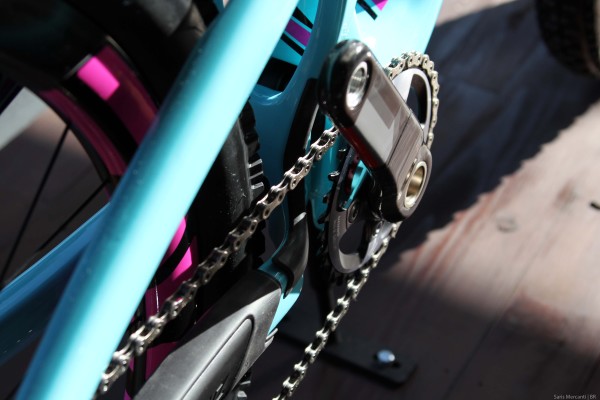 The big news is the Nomad’s complete lack of front derailleur compatability. During the bike’s development stages, the engineering team really struggled to find a way to shorten the chain-stays while maintaining  FD clearance. Its an issue that many manufacturers have struggled with, but it was mid way through the development cycle that a viable solution came in the form of the XX1 drivetrain.

After the decision was made to ditch the extra shifter, the lower link could be recessed to avoid excess mud buildup and rock strikes. This also allowed them to use a symmetrical chainstay, which offers a small advantage in stiffness. The dedicated trail models will still retain the asymmetrical chain stays for FD clearance, because in many parts of the world that compatability is still a necessary evil. 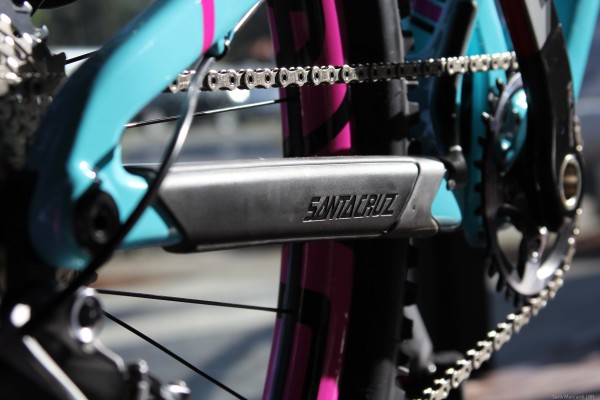 The chainstays on the 165mm travel big bike are now the same length as those found on the 125mm travel 5010. 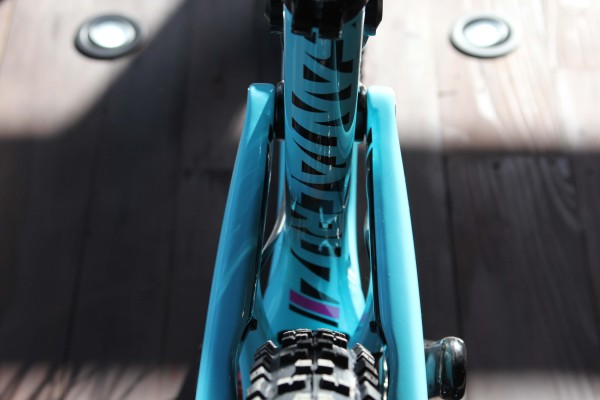 The show room bike was sporting 2.3″ Maxxis High Roller 2s front and back, but the bike was designed with enough clearance for up to a big 2.5″. 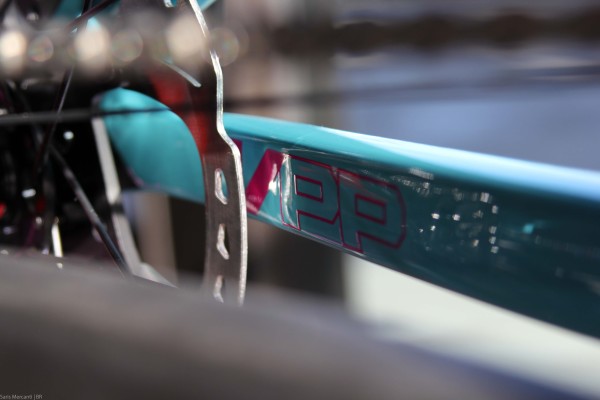 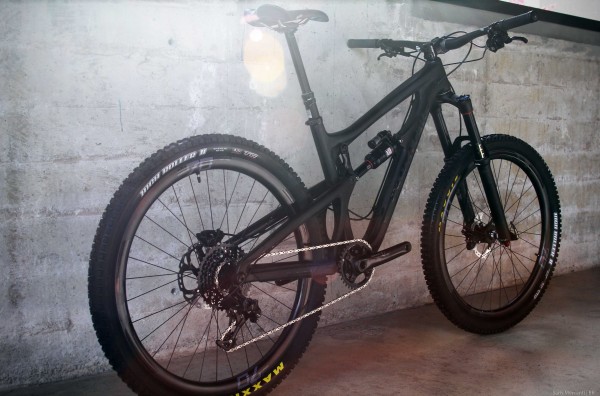 I know, its hard not to drool. 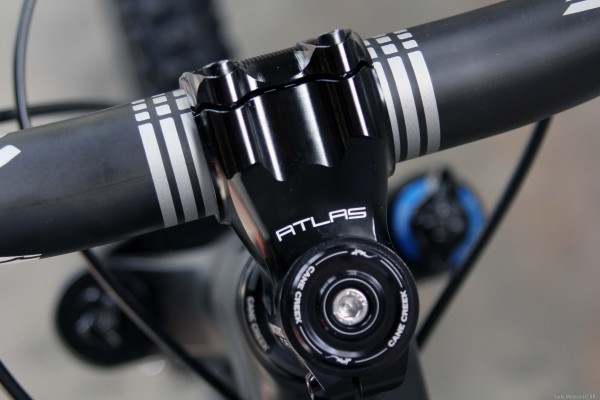 At a cursory glance of the geometry figures, the Nomad/Solo/Bronson may share the same top tube figures, but the Nomad sports a longer reach than previous models. The new geometry combined with the bike’s gravity intentions mean this bike comes stock with a 50mm stem. The 800mm wide carbon RaceFace bars are also a nice touch. 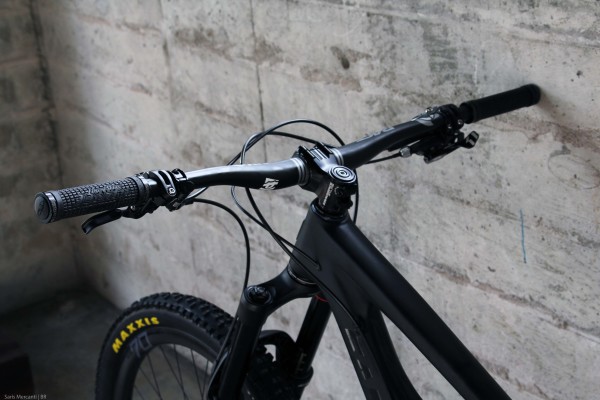 While it may not be obvious from the image, the bar and stem combo use the new 35mm standard. 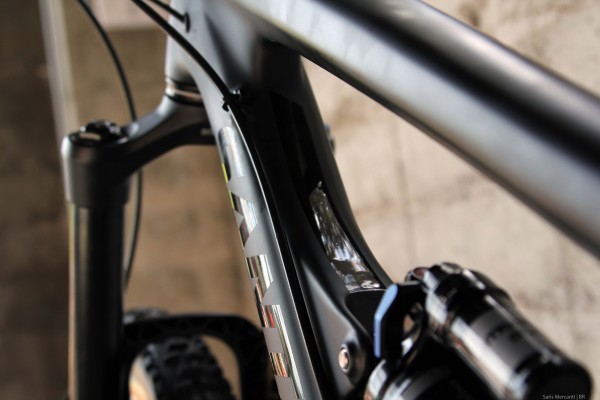 The more time you spend looking at this bike, the more the attention to detail impresses you. 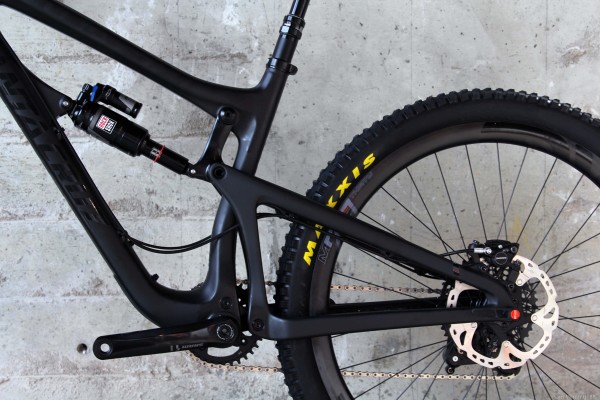 The lower link now uses only one grease port to lubricate the 4 bearings.

Wonder how the new link looks in action? Watch this clip to see the bike cycled through its suspension a few times. 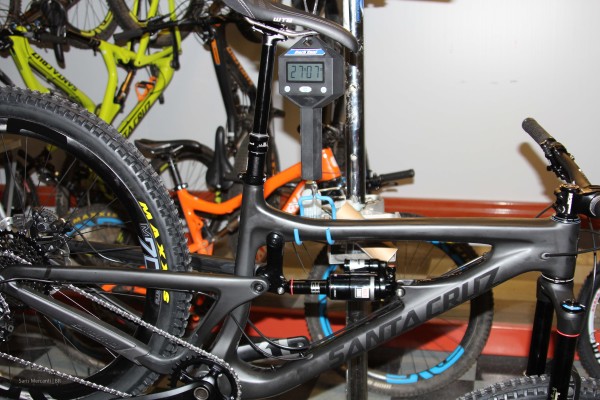 Weight fluctuates easily with tires, but this X01 equipped model with optional Enve wheel upgrade and make-no-compromise-tires weighed in at 27 lbs, 7 oz or 12.4 kg. That is .2 kg lighter than claimed and it will only set you back $8,344. Currently the cheapest build available is the X01 kit pictured here sans Enve wheels. That setup will retail for $6,599. There is currently no plan for an aluminum model, although SCB has a history of releasing more budget friendly options after the initial carbon launch.

Special thanks to Will, Nick, and Maggie for taking the time to chat with us!

Great work Santa Cruz and Bikerumor! I have never been more excited for a bike. I can’t wait to shell out my cash for this one.

The tech specs page on the Santa Cruz website says that the new Nomad seatpost is a 31.6, not 31.8.

Awesome! Choices choices. The new carbon Tracer or this, hmmm…. Now the issue of money.

Call me old school, or just call me old, but my Superlight and Bullitt are both running as solid as ever. But when it comes time to throw down and upgrade to the latest generation of bikes, I can absolutely guarantee it will be from Santa Cruz.

The cable routing is awesome IF you can brake yank style. For most of the rest of the world and those who run Moto, the brake routing fails the rub test.
Other than that tho…..

I am man enough to ride pink (er… magenta), just not rich enough… not for a long while anyways…

glad they got rid of that ugly hump of a tt.

I my opinion, it has some similar visual cues to the Turner czar.
The czar still takes the design aesthetic award! (yes i understand it is a different bike category)

ALUMINUM. I’M WAITING FOR YOU.

Beautiful bike and another fine piece of work from Santa Cruz. This is on my wish list once my ML8 stops working. Trouble is, it’s an ’05 and works like it will last another 10 years at least. Guess I’ll just have to wait for the Nomad v5.0 instead. It’s cool to see a sub-30 pounds 6+ travel bike, I just don’t understand the need for all the fancy carbon (frame, wheels, cranks, etc.); the fact that my decade-old aluminum Maverick can do exactly the same thing with the same travel makes me wonder a bit about the state of tech in the industry these days. Still, a pretty rig that I would love to ride (probably not in magenta though…).