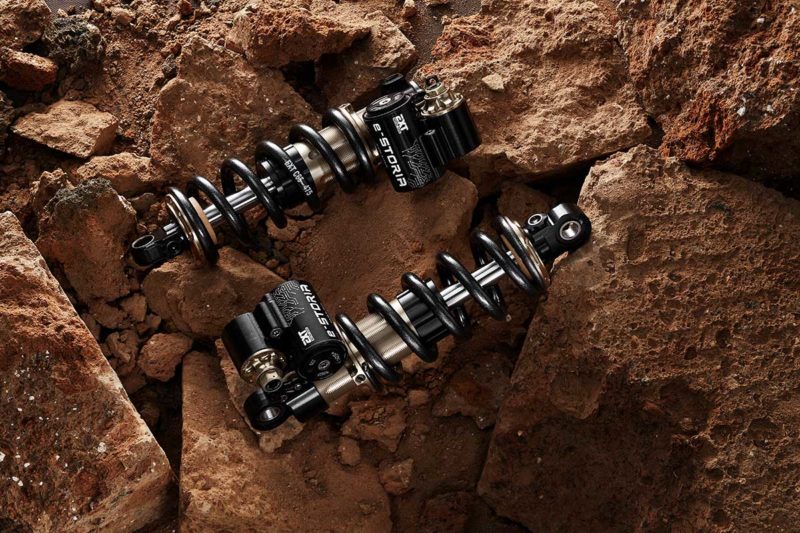 Extreme Shox have released an eMTB-specific coil shock. More than simply an overbuilt version of the Storia V3, the EXT e-Storia is engineered to withstand the additional weight and forces associated with eMTB, with a number of key upgrades to the chassis and damping system to improve reliability. Here’s the tech breakdown.

Extreme Shox are of the opinion that the current offering of mountain bike shocks don’t necessarily have the robustness and reliability to manage the extra weight, leverage ratios and suspension curves of eMTBs. Hoping to fill this gap in a market that feels as though it’s growing exponentially, the Italian Suspension manufacturers have released the all-new EXT e-Storia coil shock. 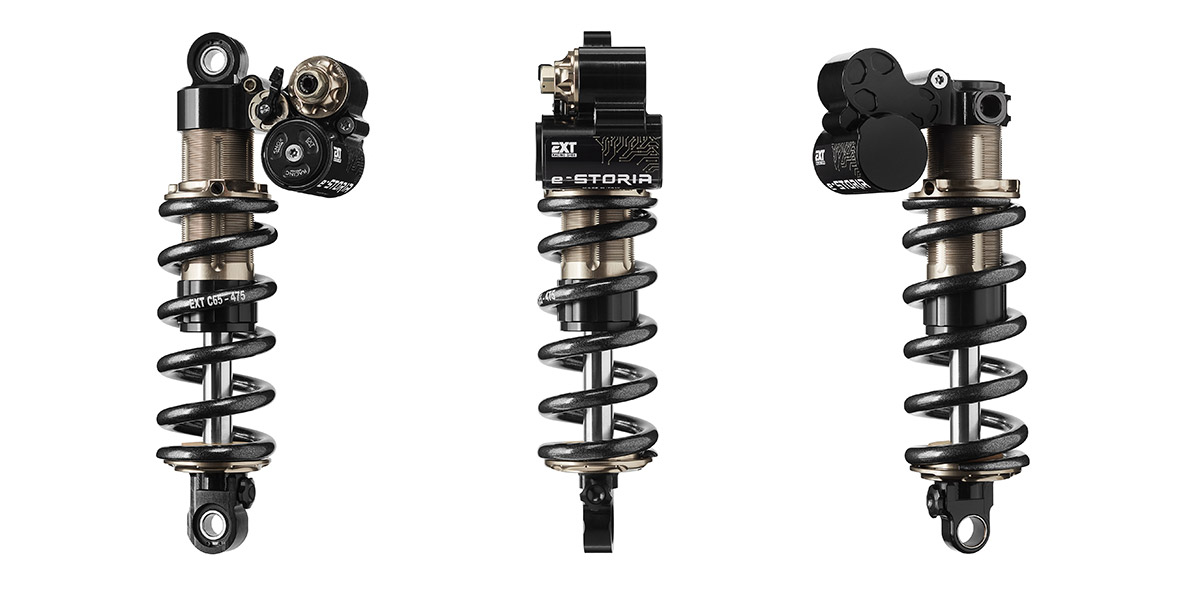 Having developed dampers for motocross, cars, quads and UTVs, there’s no real question as to whether the team behind the new e-Storia are capable of engineering something suitable for eMTB. EXT could have simply overbuilt the Storia V3 enduro shock with a stronger chassis and had done with it. It is no surprise to us however, that they’ve manipulated almost every aspect of this shock, from the chassis body, to the friction surfaces, to the damper circuitry, and the main piston itself. 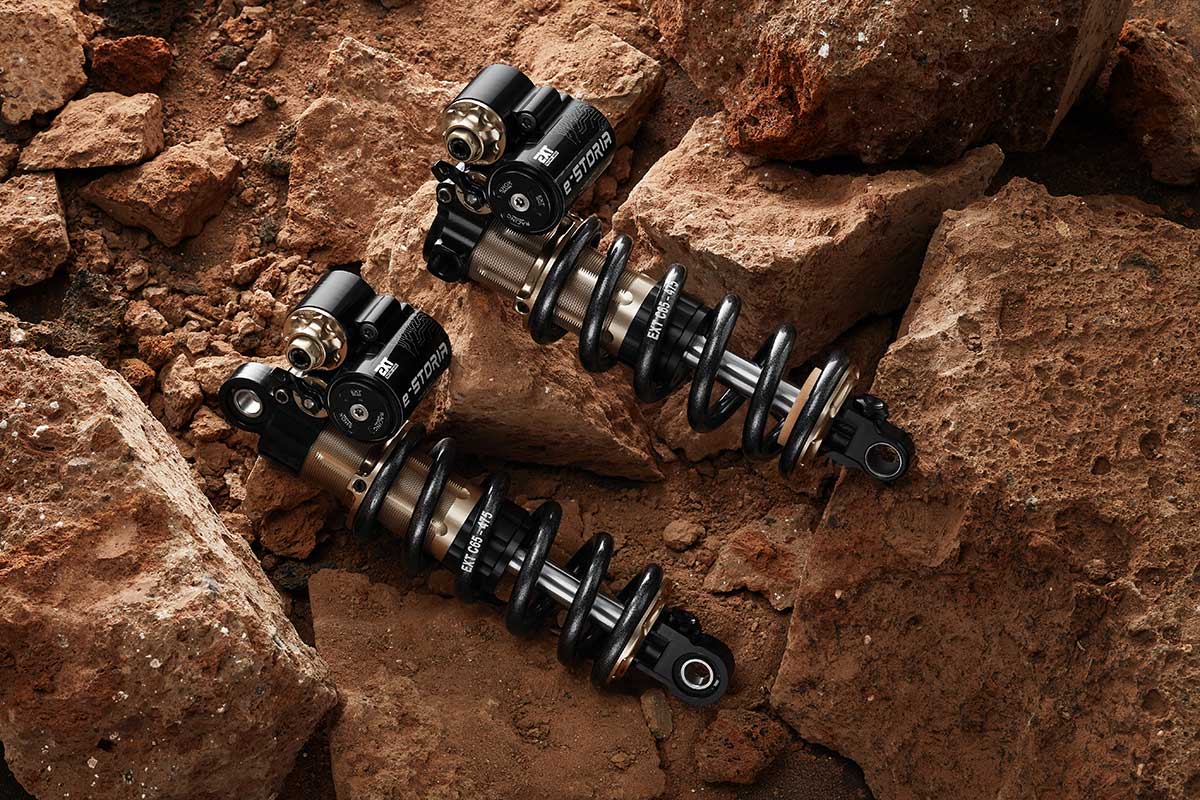 That said, the e-Storia is of course based on much of the same technology we see on the Storia V3, but with an altered damper anatomy, upgraded specifically for the stresses involved with the higher vehicle weight of ebikes. EXT claim the stronger shock design can help increase the lifespan of bike chassis components as well, and increase tuneability range to accommodate a wider range of bike and rider types.

So, what specifically is new and improved? 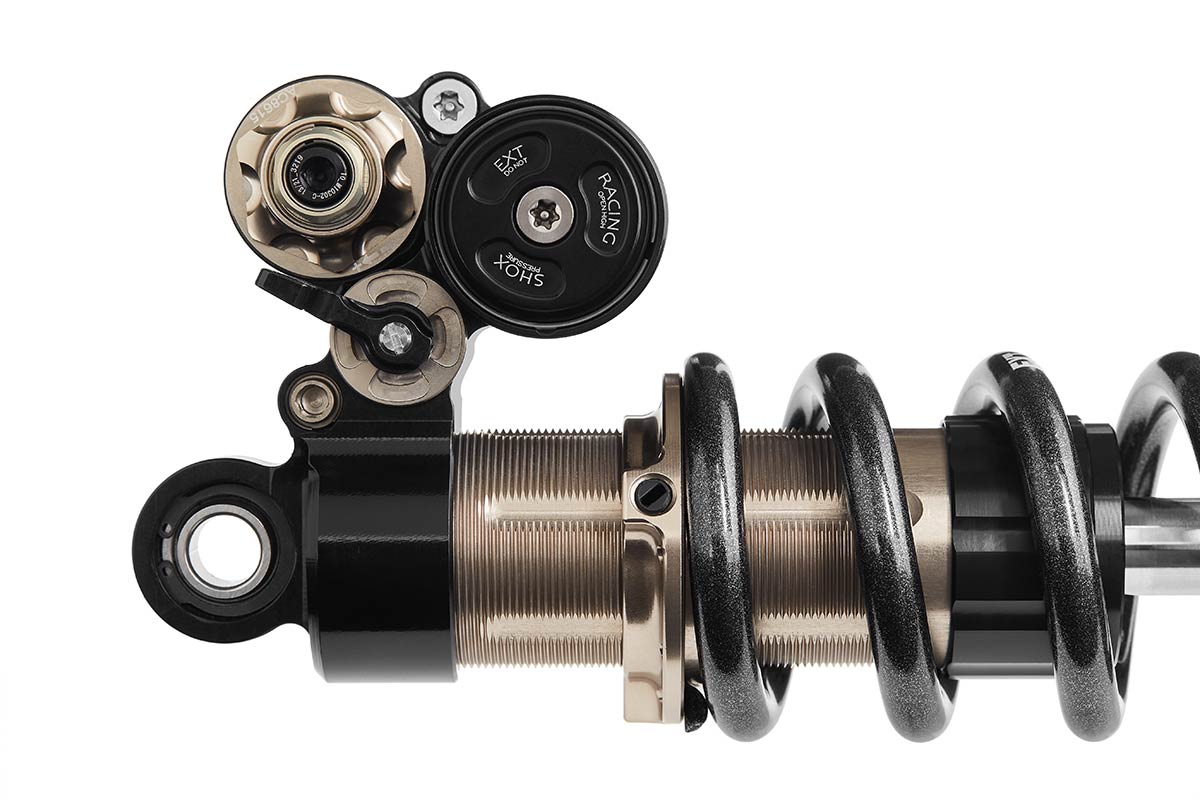 Riders familiar with EXT will immediately notice the anatomy of the piggyback is different as compared to that of the Storia V3. This is where some of the most significant upgrades to the shock are seen, with alterations to the reservoir bladder (which replaces the internal floating piston seen on traditional shocks), and the compression and rebound damping circuits. 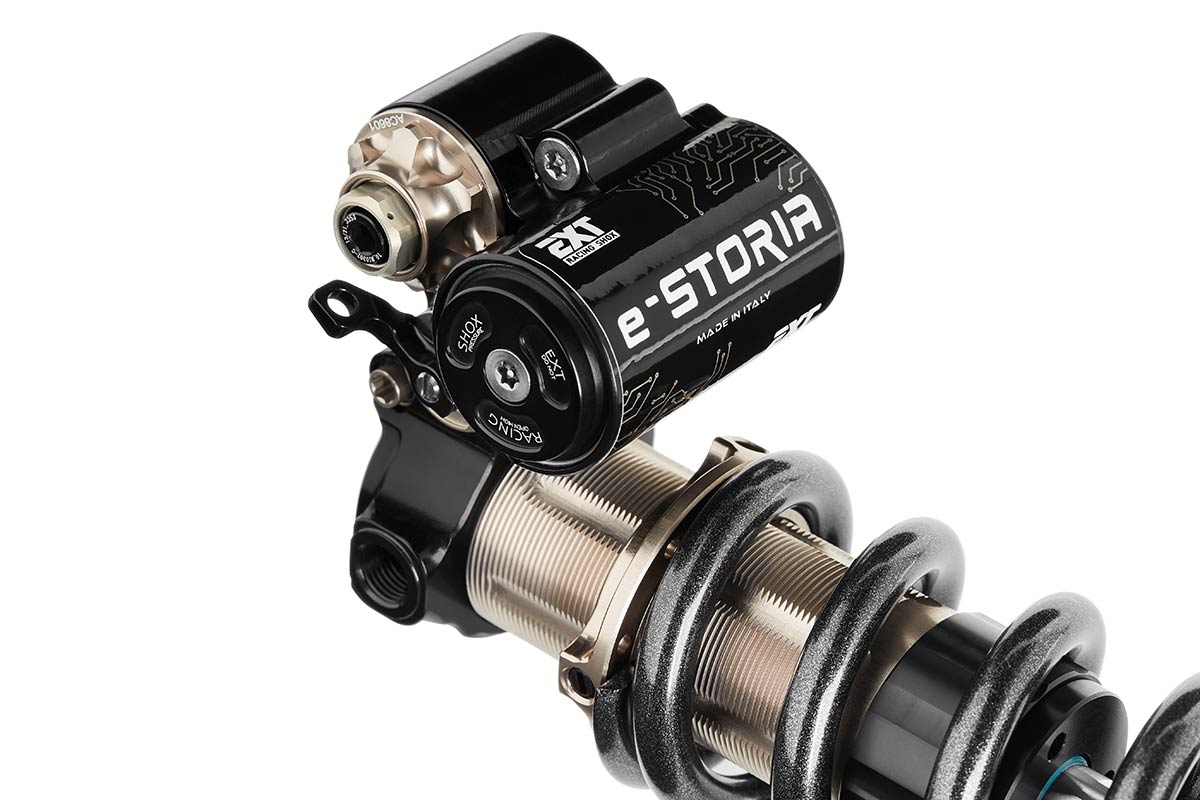 Regardless of what it looks like, the main take home points for the rider are these:

What’s important to note here is that EXT say changes can be made to one of the circuits without affecting the behaviour of the other. They exist in complete isolation of one another. Flowing through the valves is a new oil of a higher viscosity index, meant to improve ride feel consistency from season to season.

All valves within the damper feature turbulent flow technology said to to assure consistent damping under different temperatures and under extreme conditions of use. 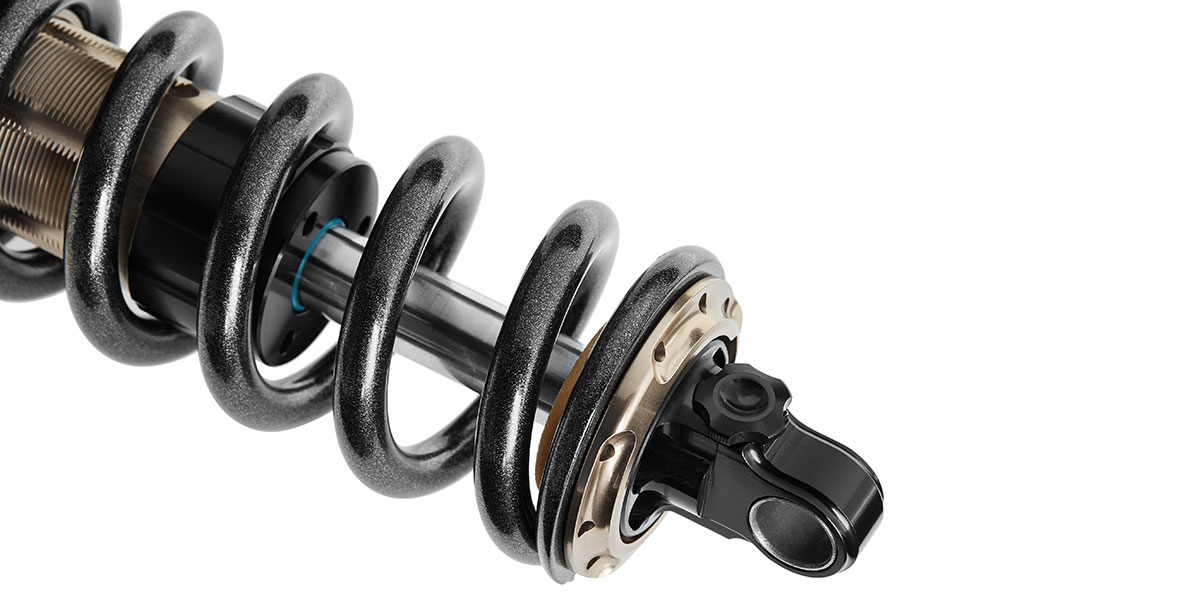 Something the stock Storia V3 doesn’t have that the e-Storia does is a negative spring, something we don’t see very often on coil shocks (read about why that is here). On air shocks, large negative springs can improve plushness off the top of the stroke. Due to the comparative lack of stiction and friction seen on a coil shock, relatively speaking, a negative spring isn’t so important. However, EXT say it avoids harsh top-out and improves bike platform stability. 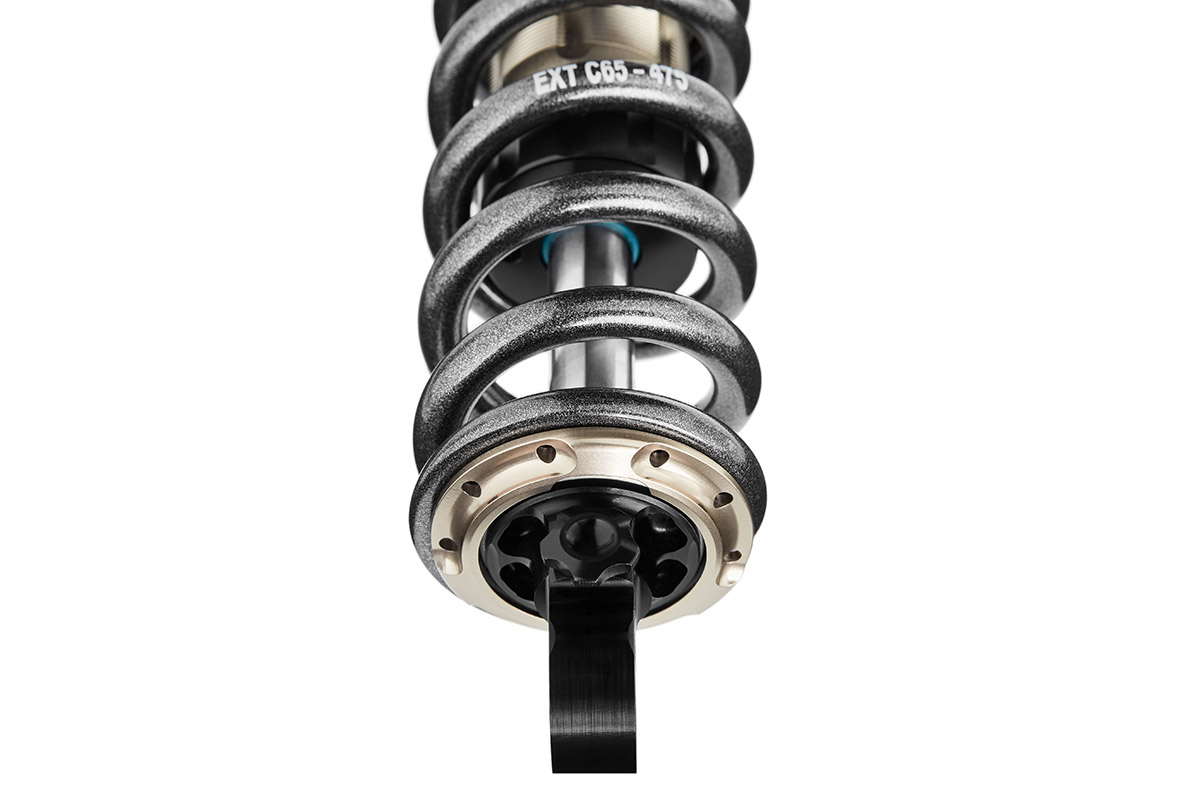 In addition to the enhanced strength of the shock body, the spring platform has been re-engineered to accommodate the stiffer springs riders will run on eMTBs.

Other improvements seen on the e-Storia eMTB-specific shock, details about which we are still waiting on, include the following:

The EXT e-Storia shock for eMTB will retail at 879€ +VAT and delivery can be expected from July 2nd. It comes as a regular eyelet or Trunnion-mount. Springs are available up to 800lbs. Spherical bearing hardware is available upon request. Sizing is as follows: