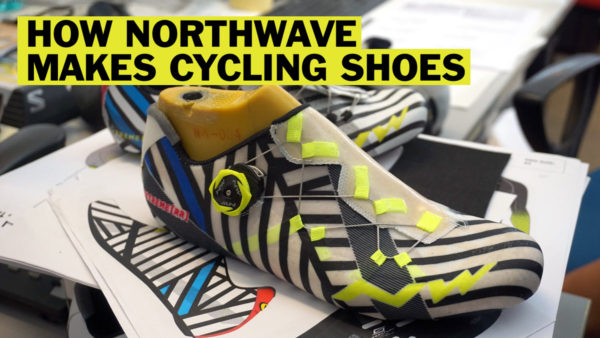 Northwave has long been known for their high end road bike shoes, which have found a home on some Bikerumor editors’ feet for the long haul, so we wanted to see how they were made. We visited their headquarters in Pederobba, Italy, which sits just north of Treviso and is home to many a high end shoe manufacturer. And boots. And plenty of outdoor gear brands, too. After a quick lunch (of pizza, naturally) and an espresso, we set off to see what was inside… 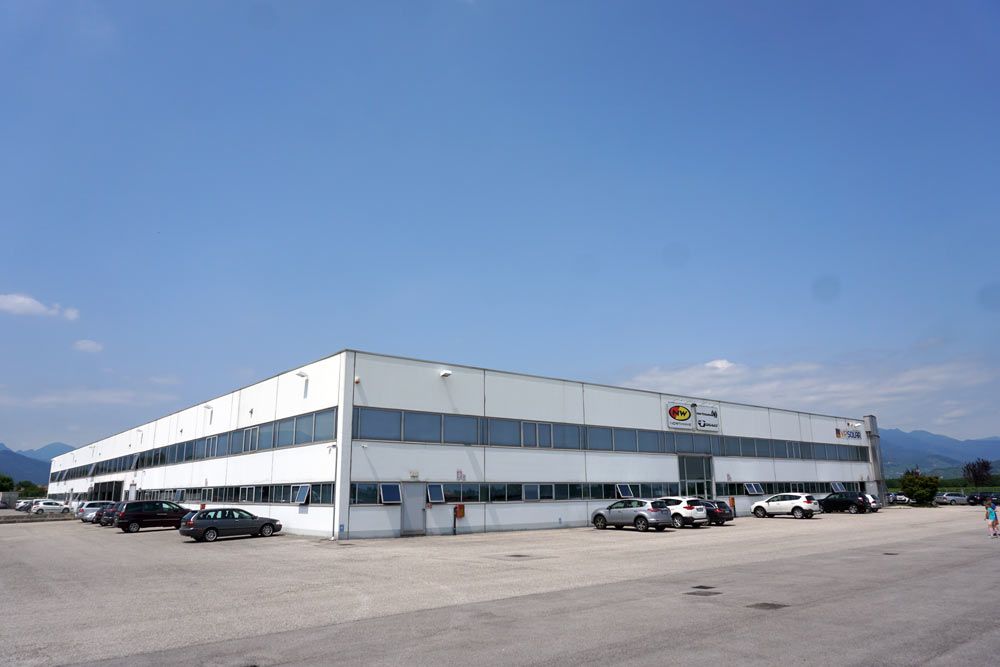 Their headquarters is home to all marketing and administrative duties, and some inside sales. It’s also home to a full manufacturing plant, which is where they make all of their high end shoes by hand. The less expensive models are made elsewhere, but benefit from what they learn from years of crafting the more expensive models. And custom shoes for their sponsored riders, a few of whom you’ve definitely heard of…

Follow along on a visual tour, then watch it come to life in video at the bottom of this post! 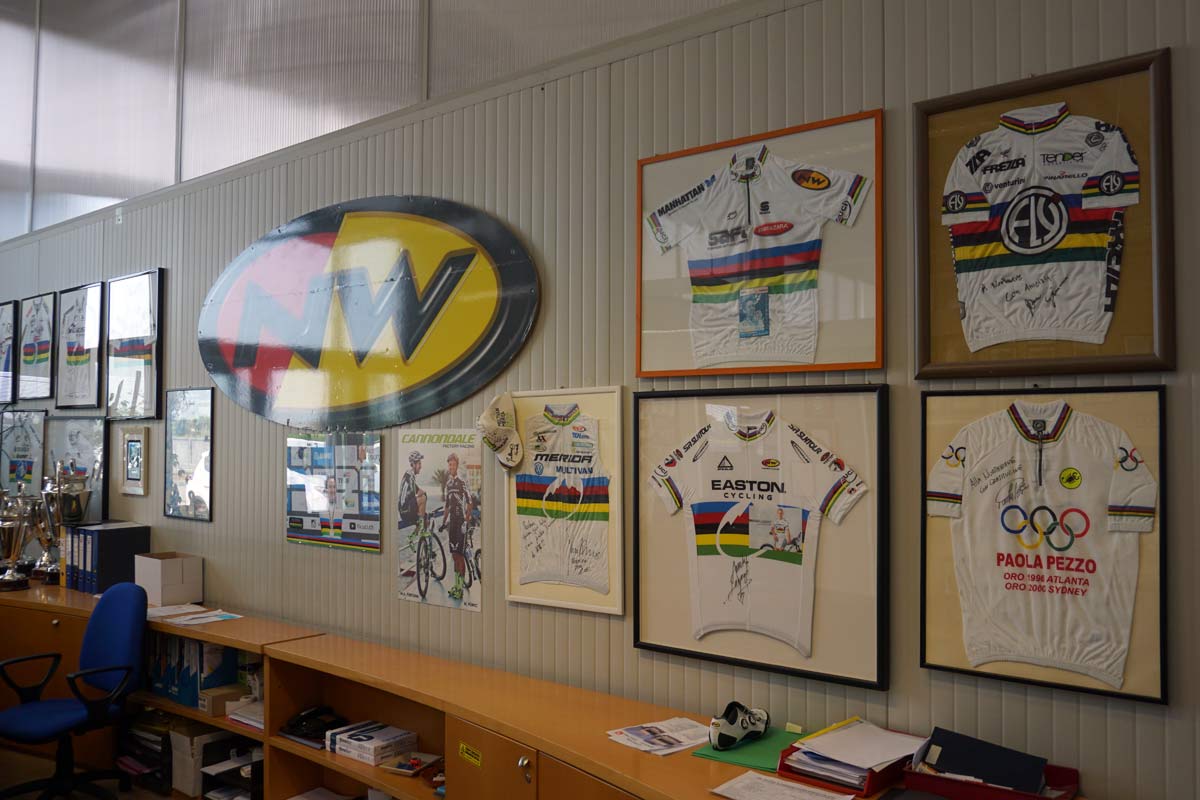 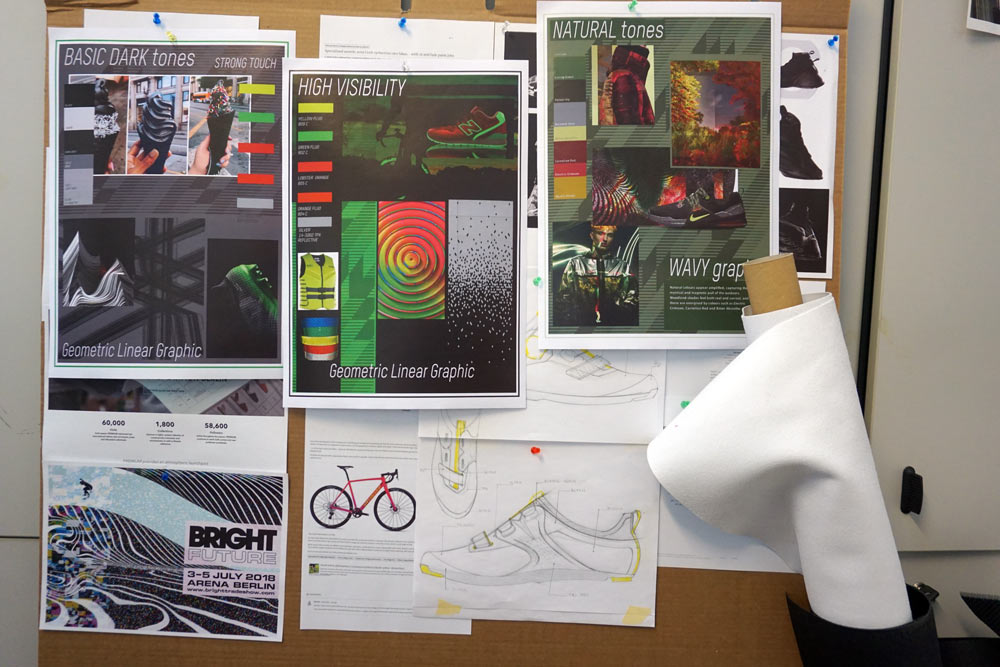 …but not as vivid as the various design inspiration boards they had pinned up in the creative department. Like virtually every other brand we visited, Northwave collects patterns, colors and themes they like to come up with future collections. 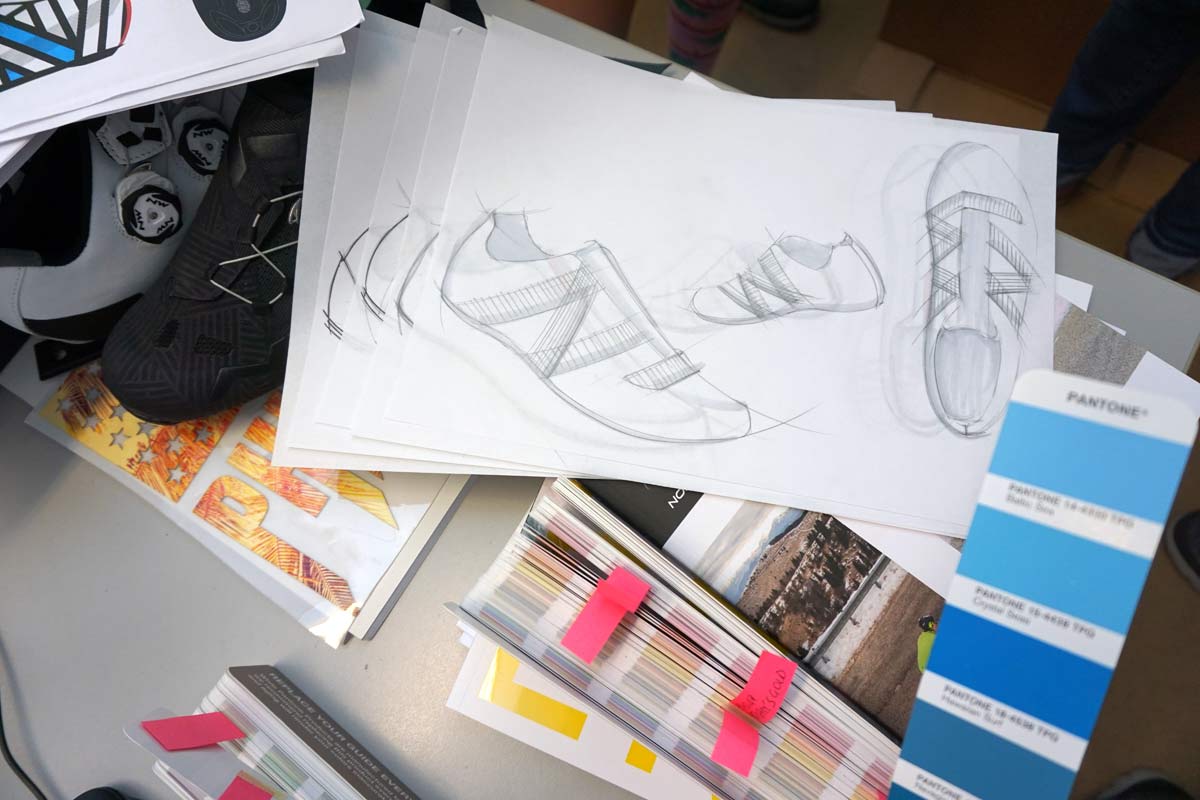 From there, they sketch their own designs and choose colors. 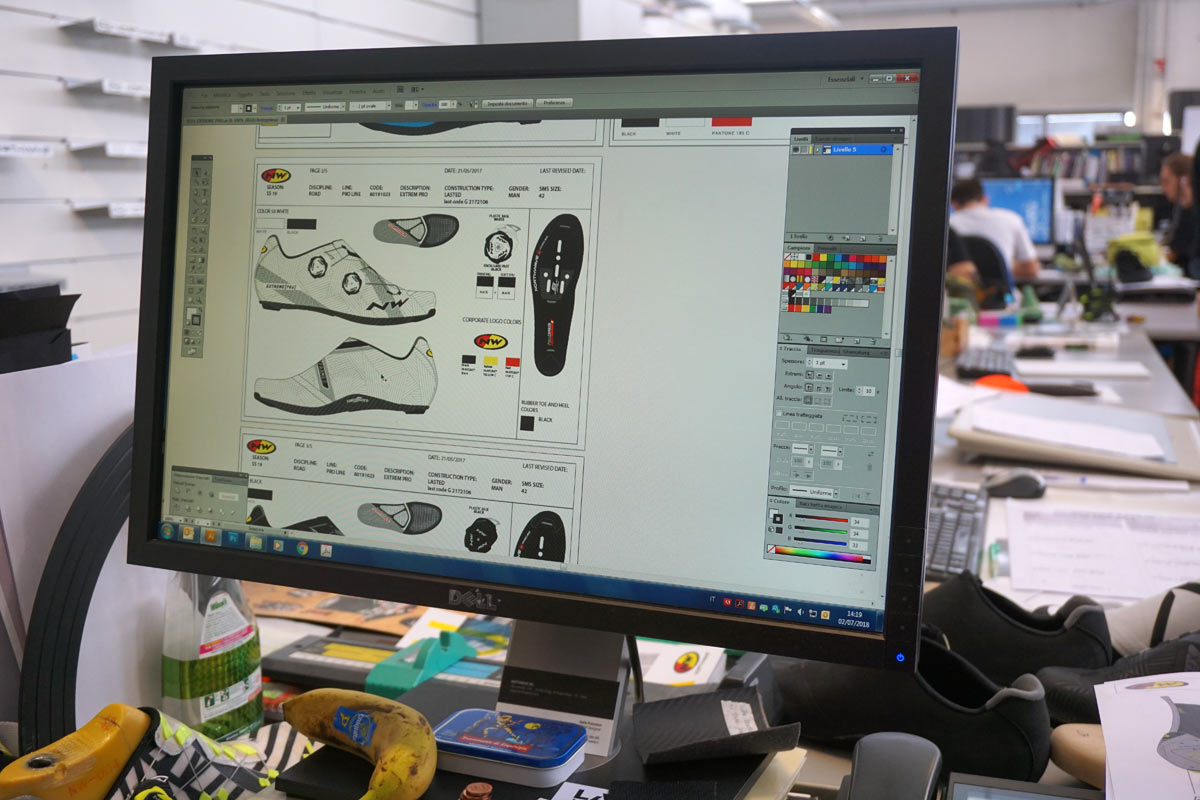 Those are input into the computer, where they go from paper to Adboe Illustrator for a 2D proof. Then the engineers are shown so they can weigh in on the placement of the dials, straps, seams, etc. 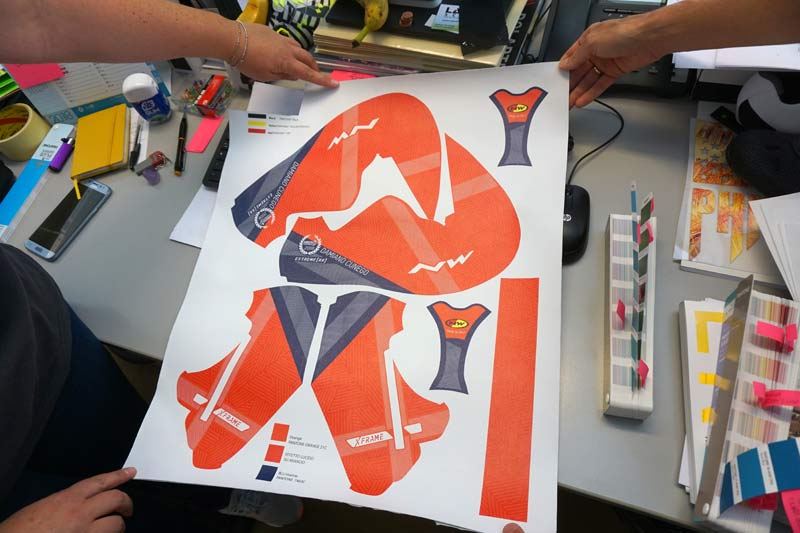 After that initial OK, it’s print out on a textile material that’s able to be cut and sewn into an upper for the next round of proofing. 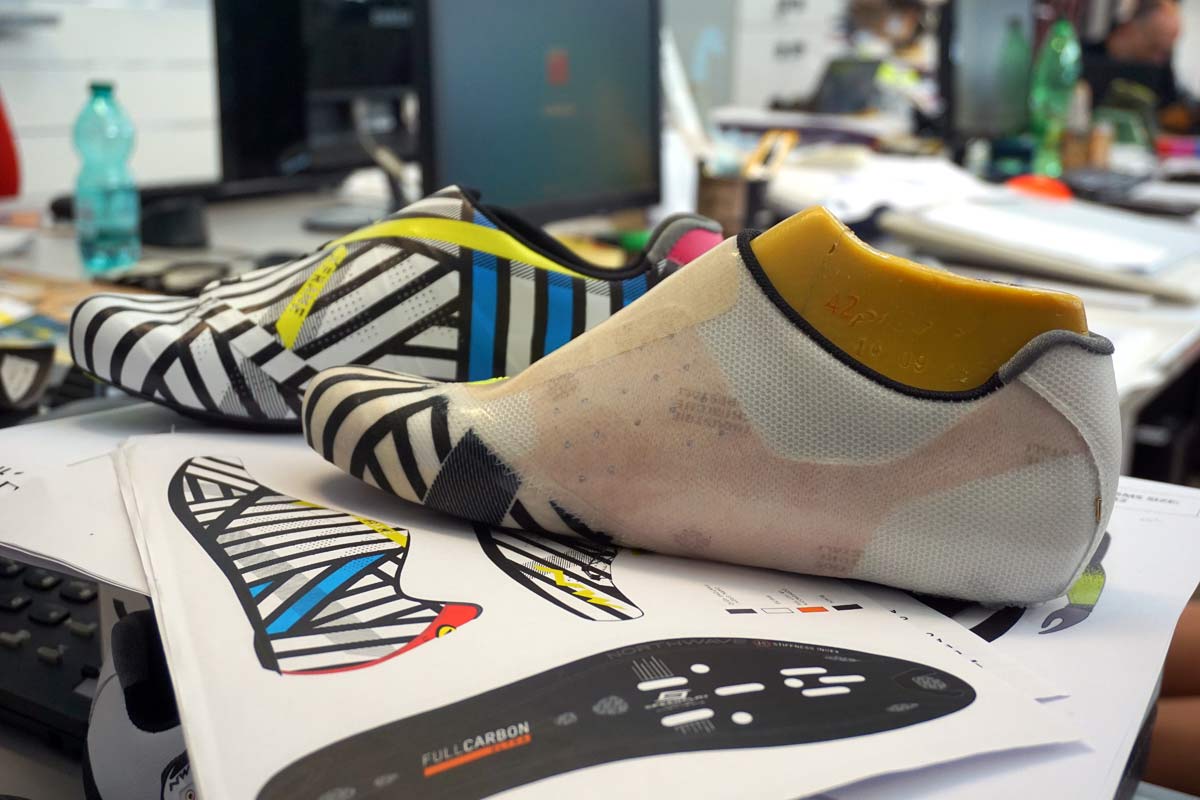 They create an upper using this intermediate manufacturing method to see how it lies on the foot shaped last, which lets them see if their concept does actually line up as they’d hoped. Sometimes it takes a lot of samples to get it right, but it also lets them test how new fabrics and materials will act when stretched and sewn. 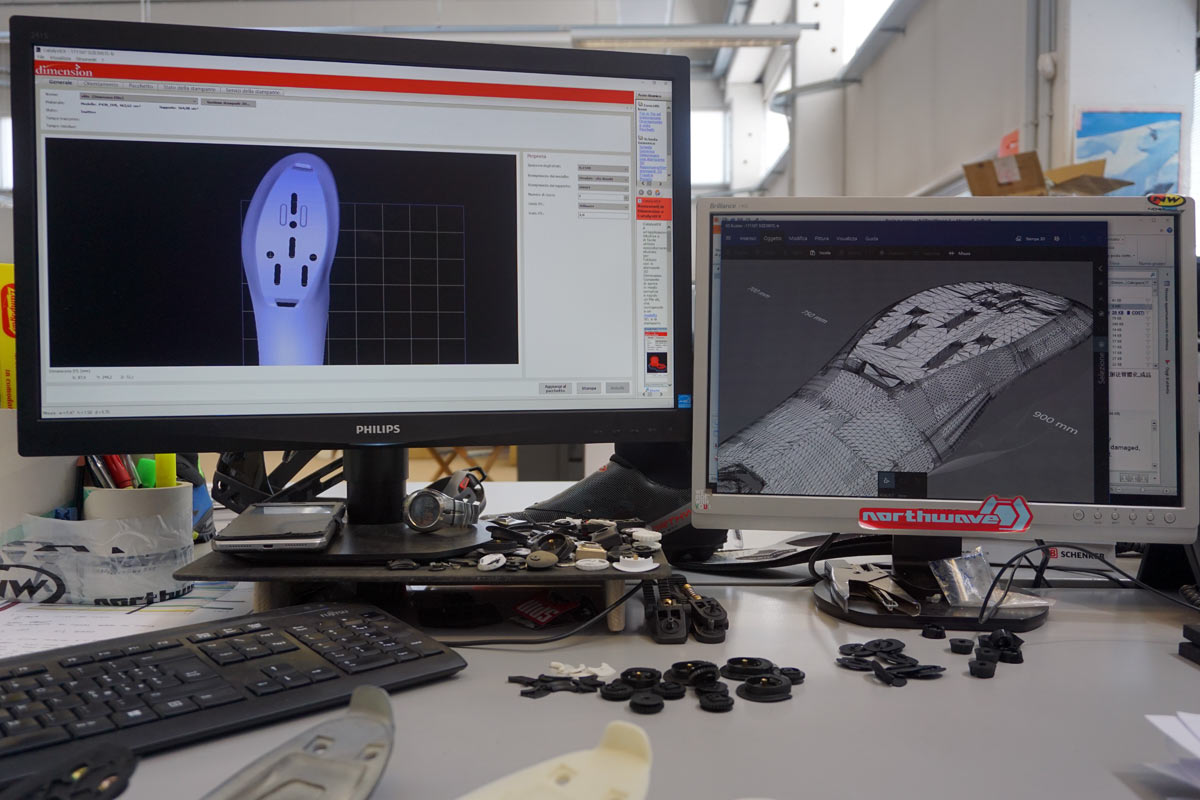 Across the aisle, the outsoles and hard physical parts are being designed in CAD, then can be 3D printed to test fit and shape.

Above are various outsoles and layers, along with a pile of different ratchet closures they’ve designed and tested. Northwave creates their own ratcheting mech rather than use a 3rd party supplier like BOA.

Hot off the press during our visit was this sneak peek at the new PowerShape outsole they launched at Eurobike. Unlike the ultra-narrow mid-sole they’ve used before, these add a bit of arch support.

We also got an early look at the layered tread and cushioning construction of their new (and first-ever) flat pedal shoes, also launched at Eurobike. 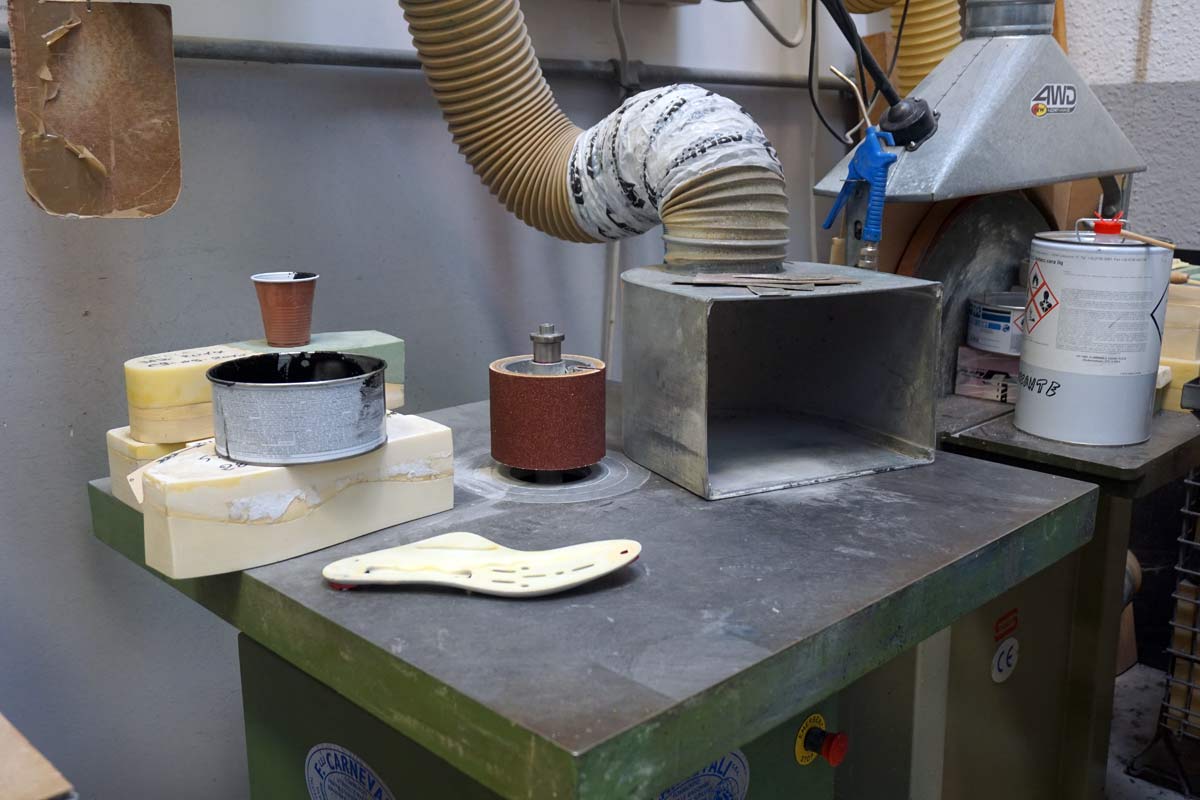 Before the CAD system and 3D printer they would carve soles out of resin blocks. From 2 weeks to about 2 hours, which saves a massive amount of time when they need to make continual refinements to get them right.

Custom Cycling Shoes for the Pros 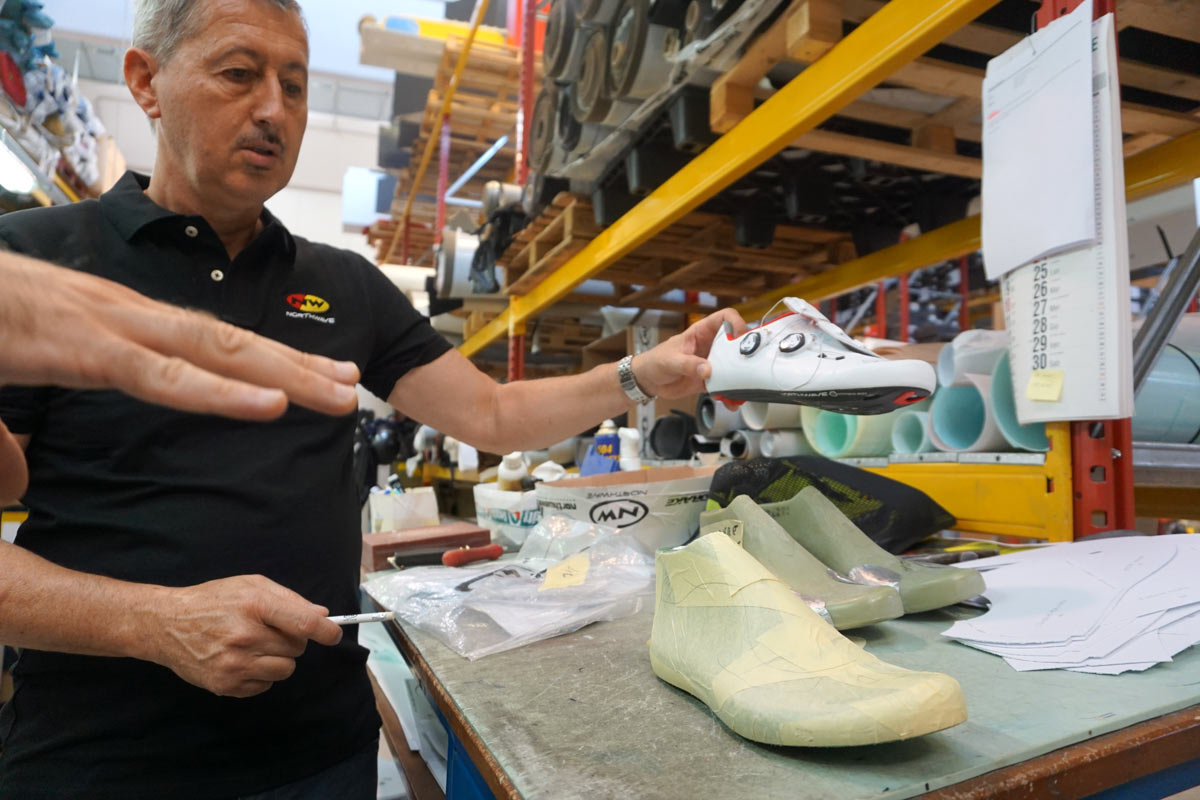 However, there is still a lot of hand trimming going on in one department. This is where they shape the lasts for their sponsored pro athletes, some of whom have had very uniquely shaped feet over the years. Or widely differing sizes and shapes from left to right. 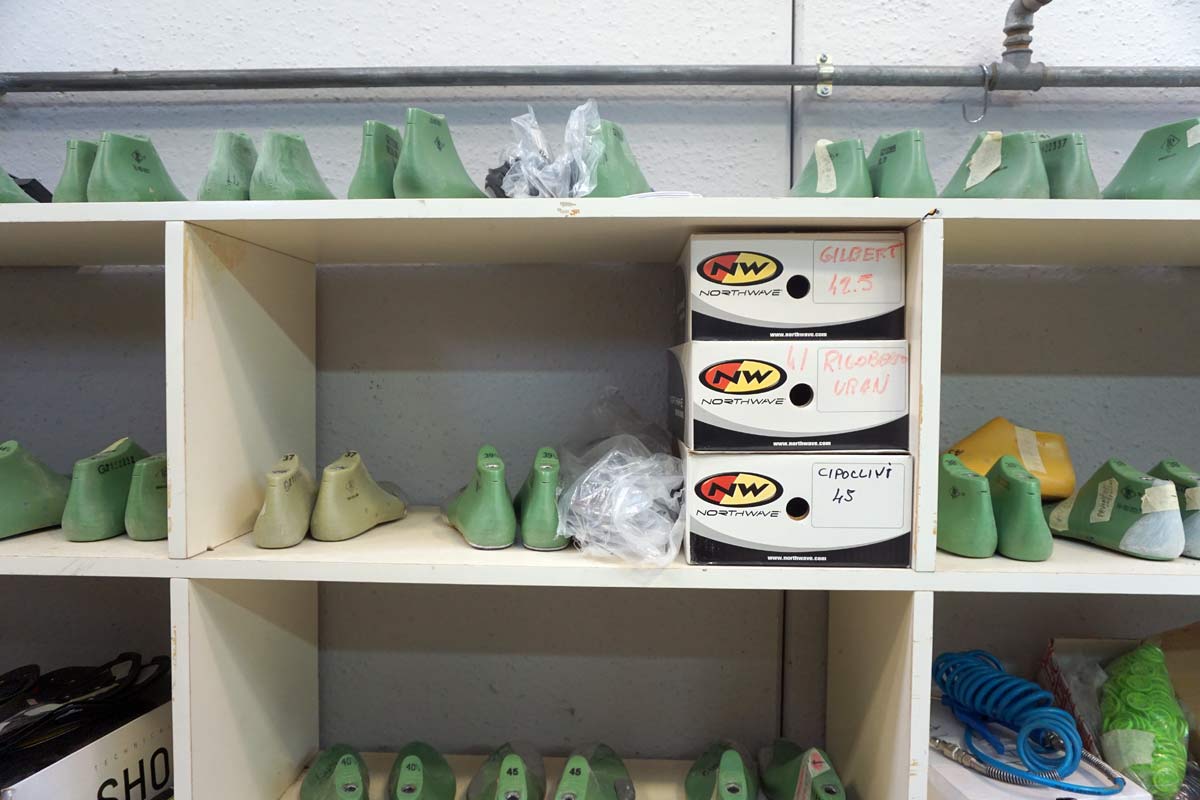 Recognize anyone? They keep the custom lasts on hand so they can make new shoes as needed. 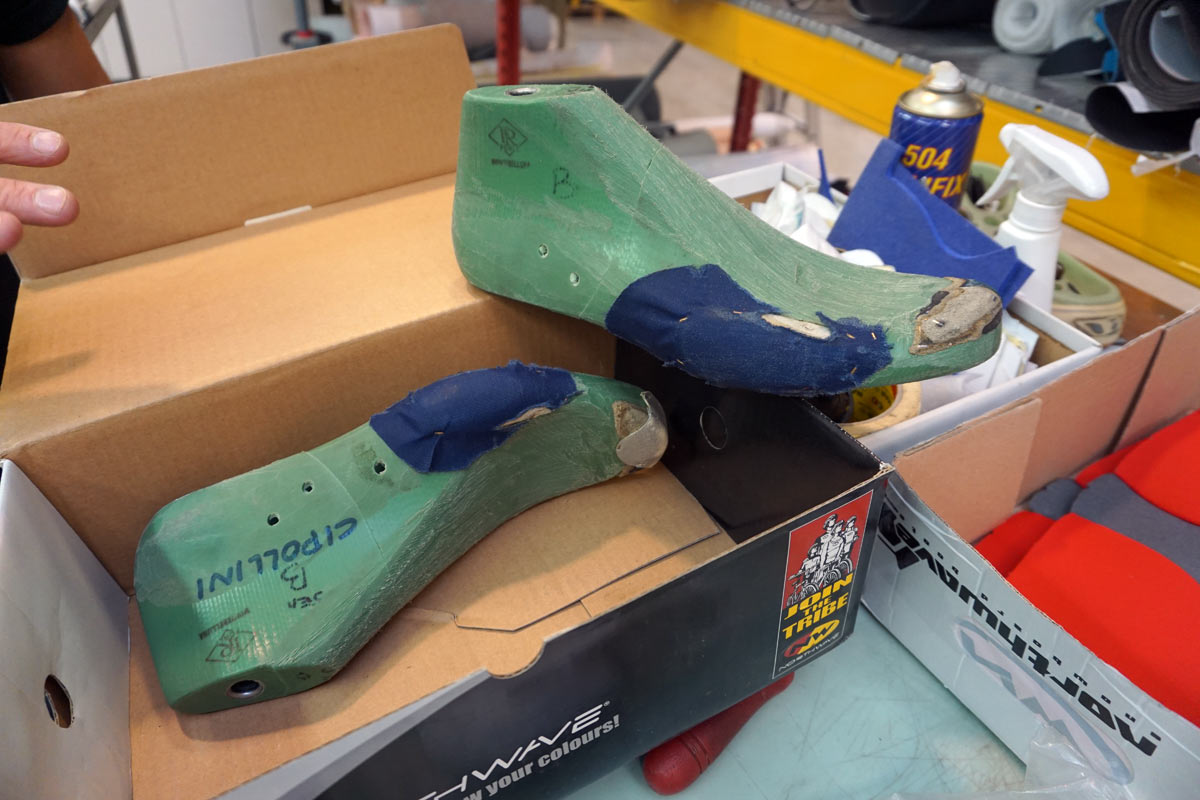 Note the build up or removal of material, that’s how they match the athlete’s foot profile. From there, the process is very similar to building their traditional shoes. 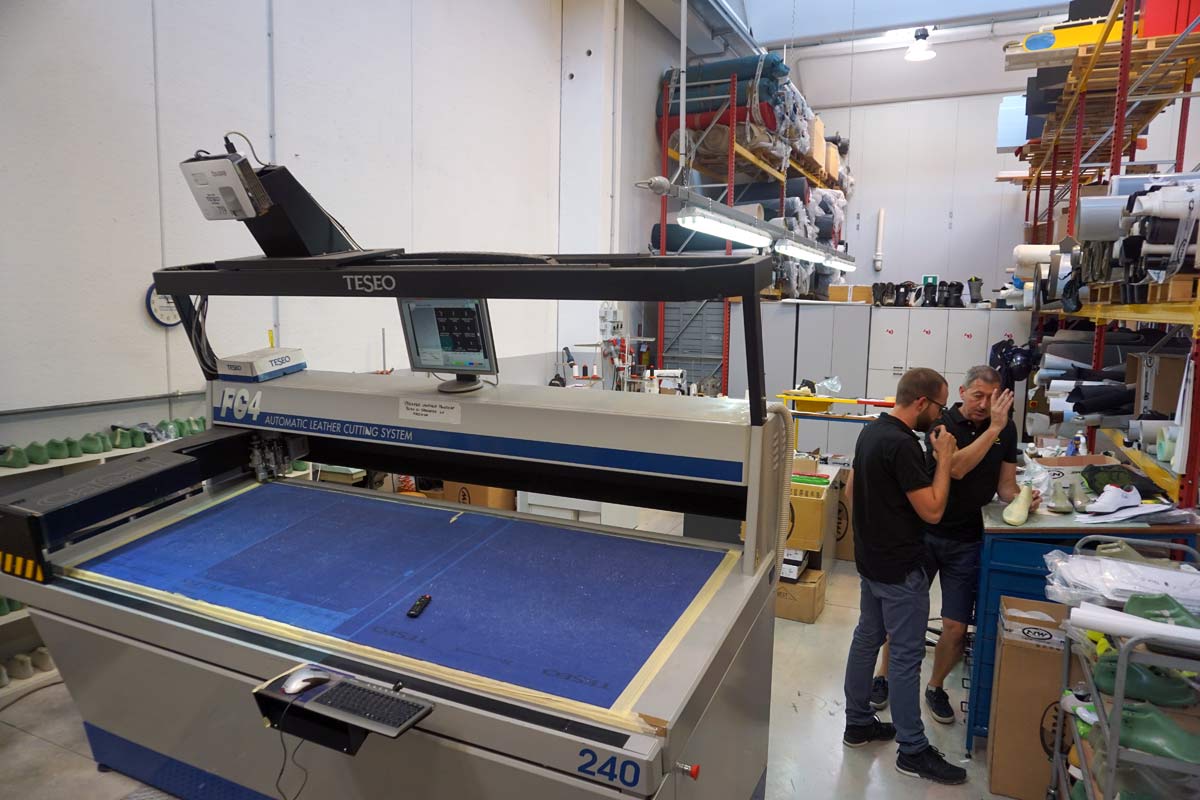 The uppers come together in several steps. First, the inside mesh and outers are cut to shape.

The synthetic microfiber outer layer has an adhesive back, which is then stuck to a matching mesh inner layer. This helps provide some structure, but mainly helps transfer sweat and moisture to the openings. And, where there are other holes in the upper, prevents rocks and stuff from getting into the shoe.

Before they can be bonded together, though, any lacing loops and other bits are pulled through the holes and attached. 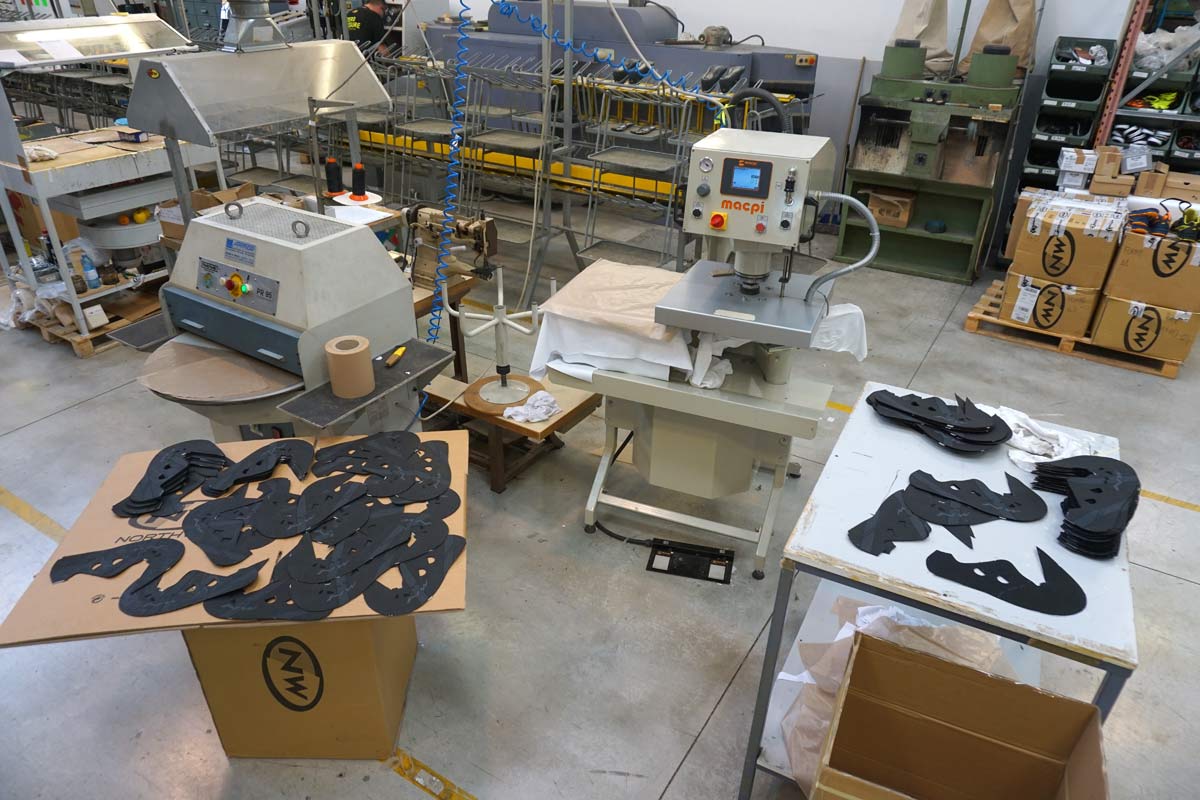 Then they’re pressed together. 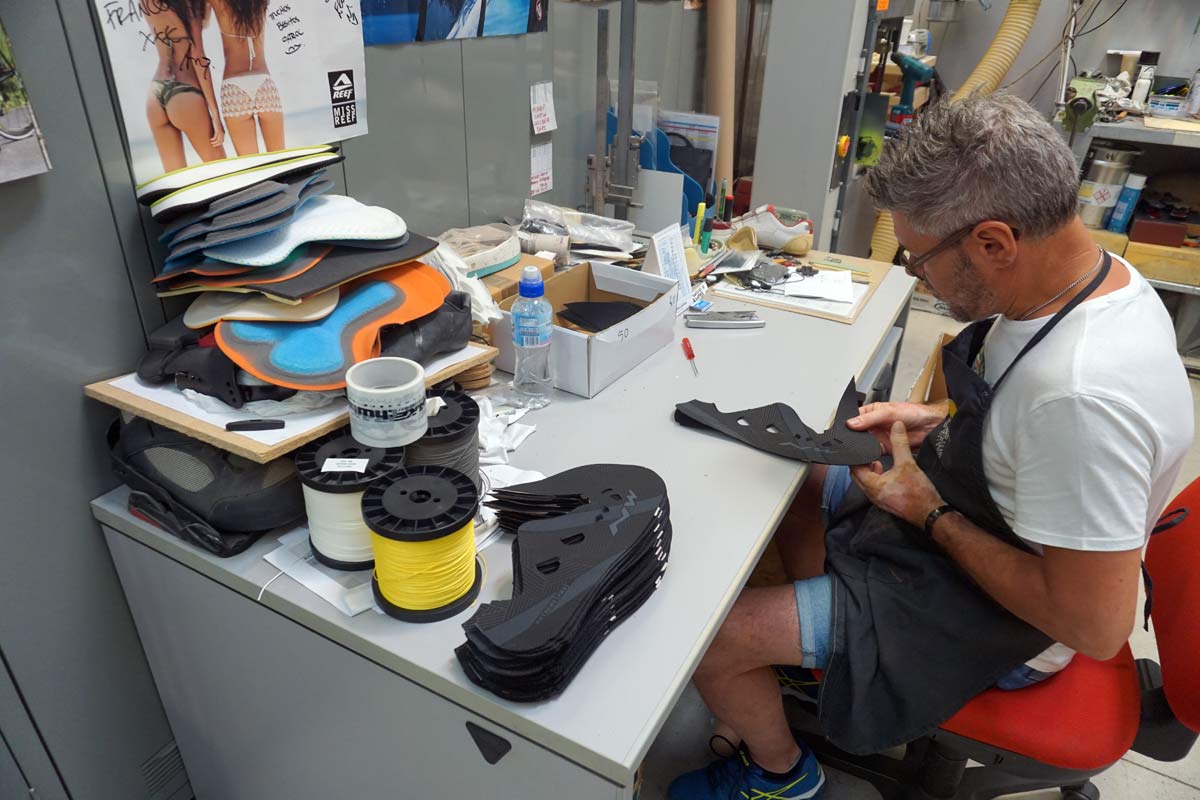 This is the guy that puts those loops and parts in place, pulls them through the slits and holes, and double checks alignment. 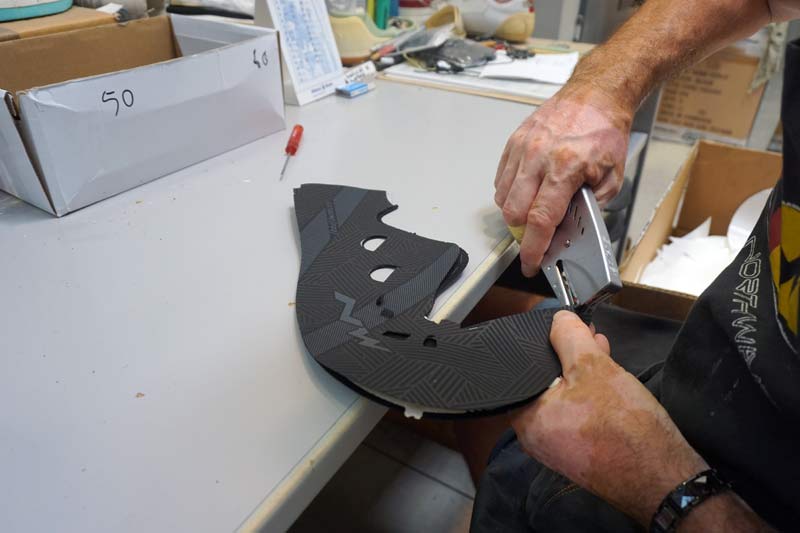 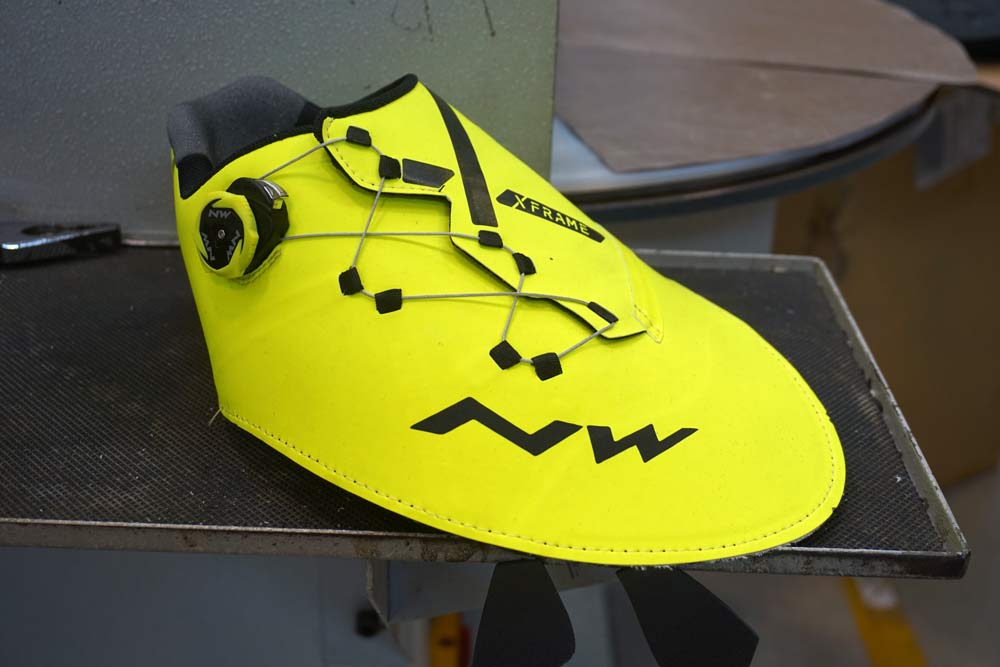 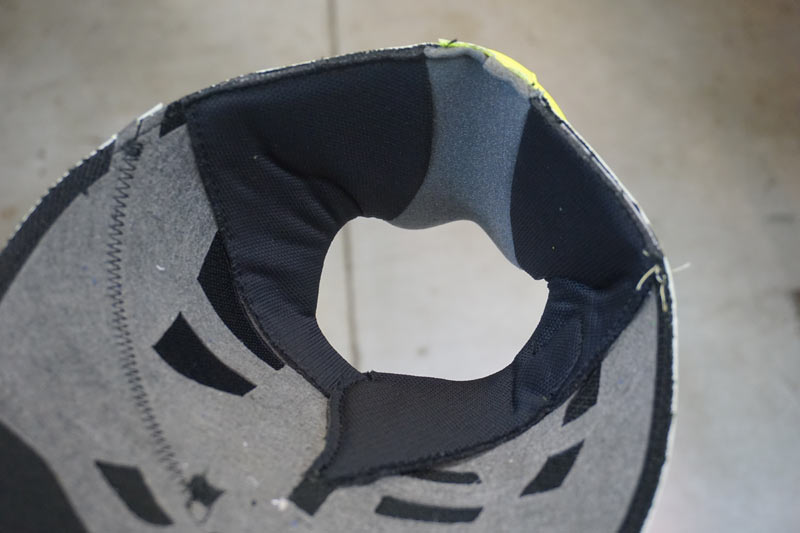 Next, the heel cup is attached and the upper starts to take shape. 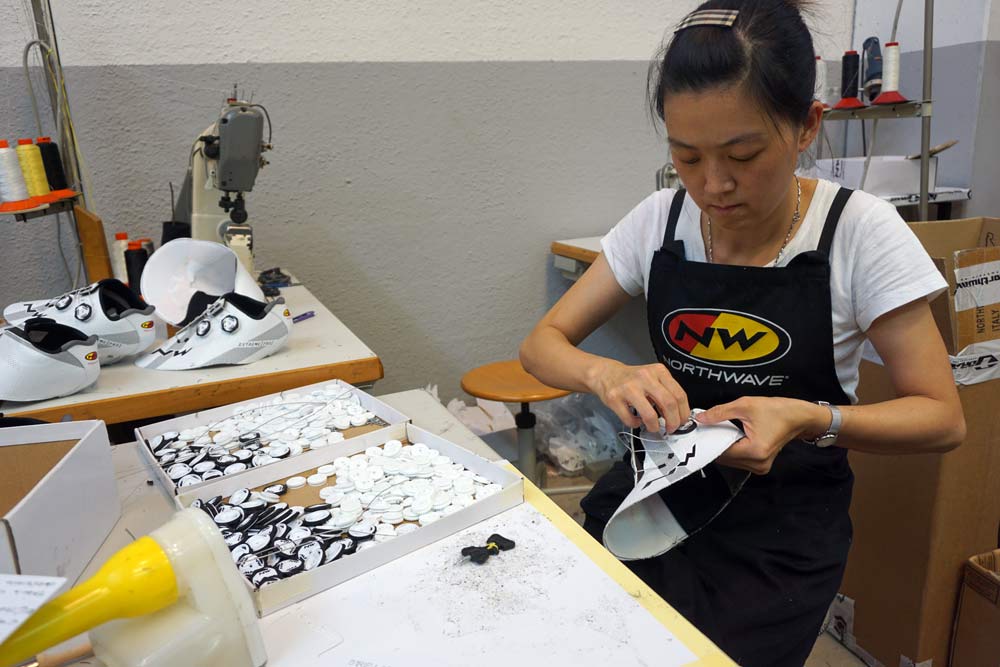 Then the ratcheting closure cables are threaded through the loops, tied into the ratchet, then it’s screwed together onto the shoe. 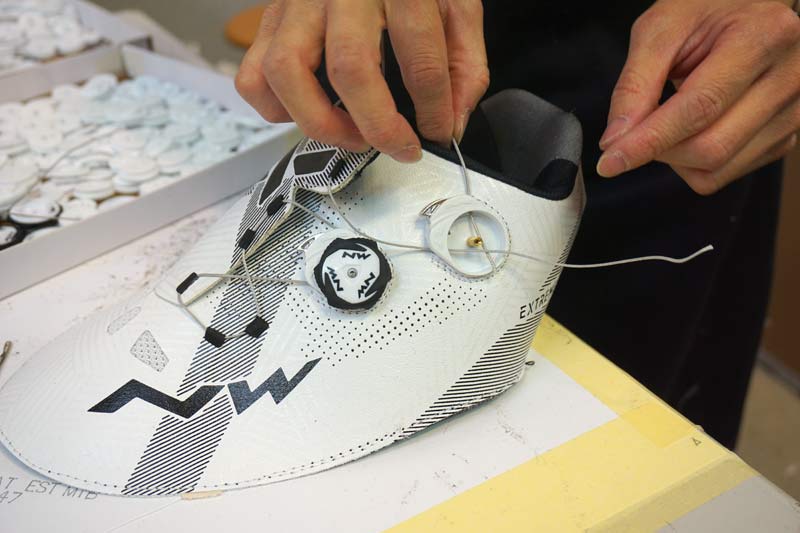 If you’ve ever wondered how these things come together, there video of it being assembled at the bottom of the post!

The next step is placing the uppers into a heat press to shape the heel cup, then rapidly chill them to set that shape permanently. 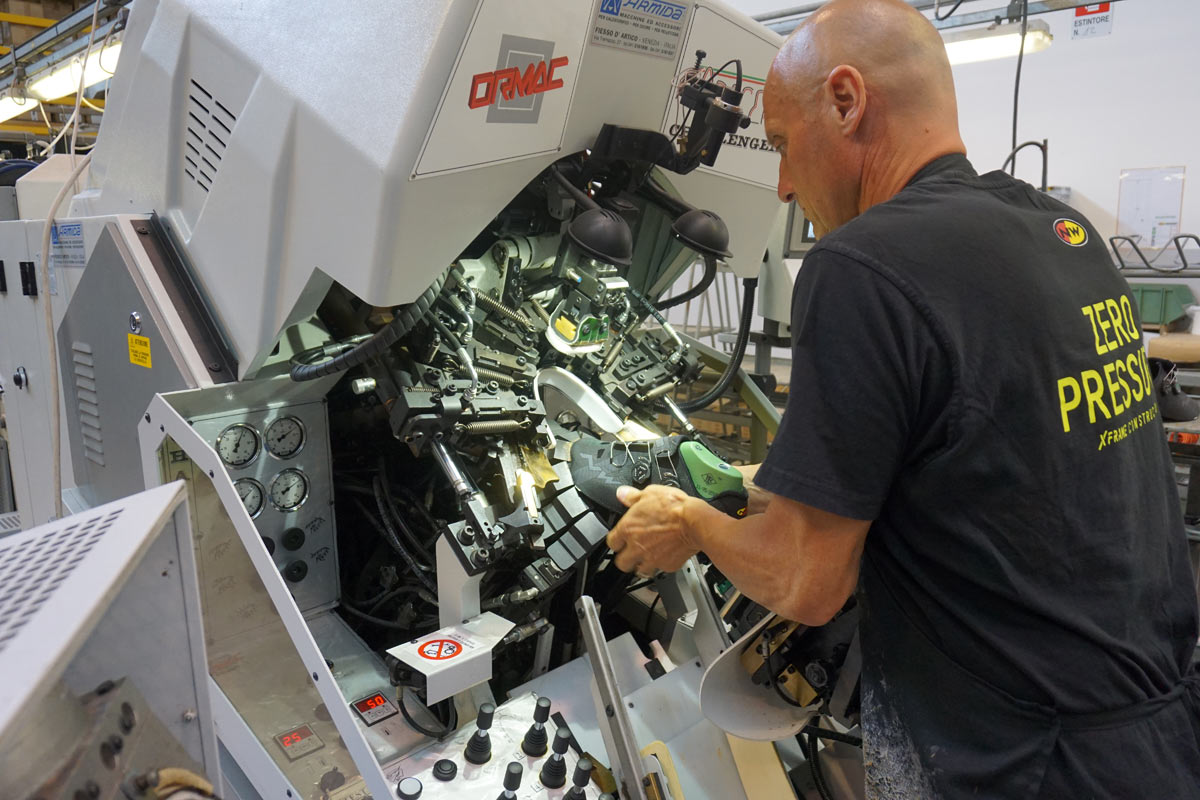 While that’s happening, this guy staples a bottom layer to the last, then uses this machine to stretch the upper over the last…

…and bonding it to the inner layer. Now it’s really starting to look like a shoe. 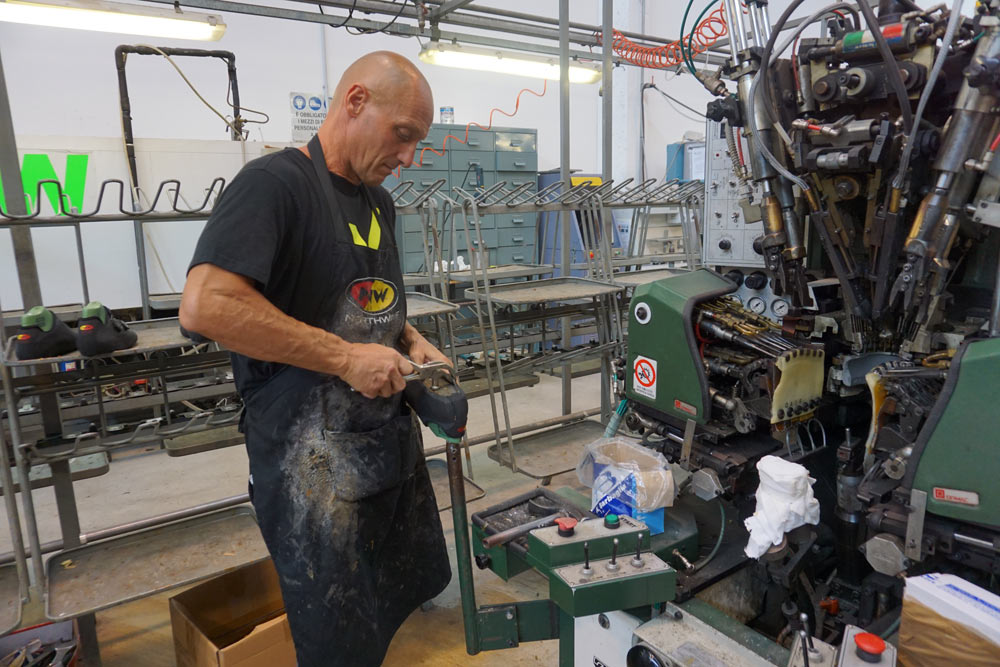 Next, he pulls the middle and rear parts of the upper tight around the last and hammers them onto the bottom. Glue helps hold it in place… 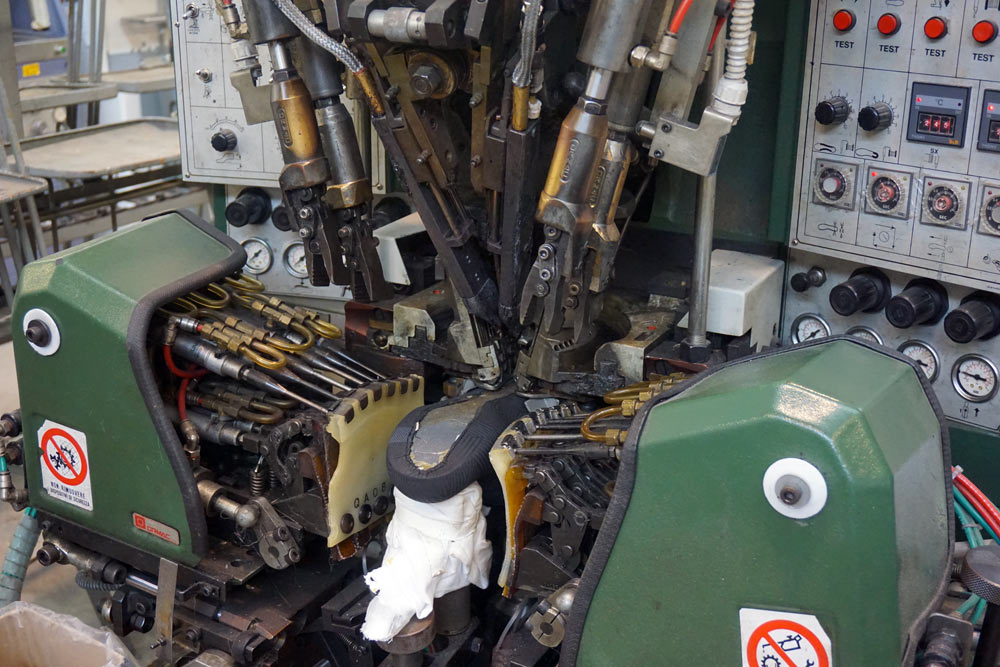 …while it’s placed in the next press… 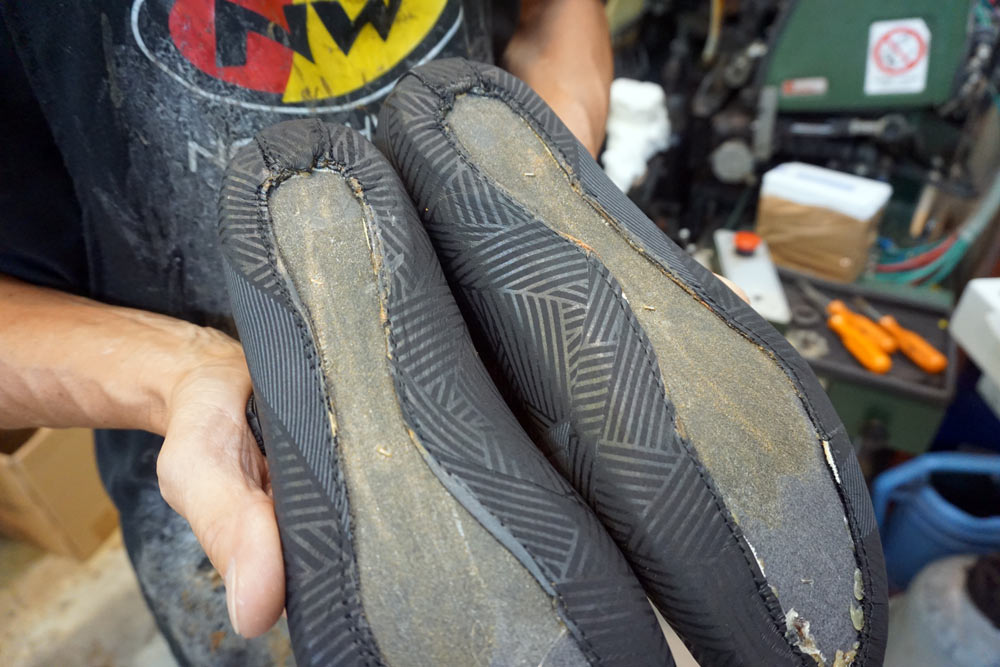 …which heats and bonds the middle and rear part of the upper into place. The sharp edge of the lower is sanded to help it transition into the bottom more smoothly, but also to roughen everything so the glue will better stick the outsole to the upper. 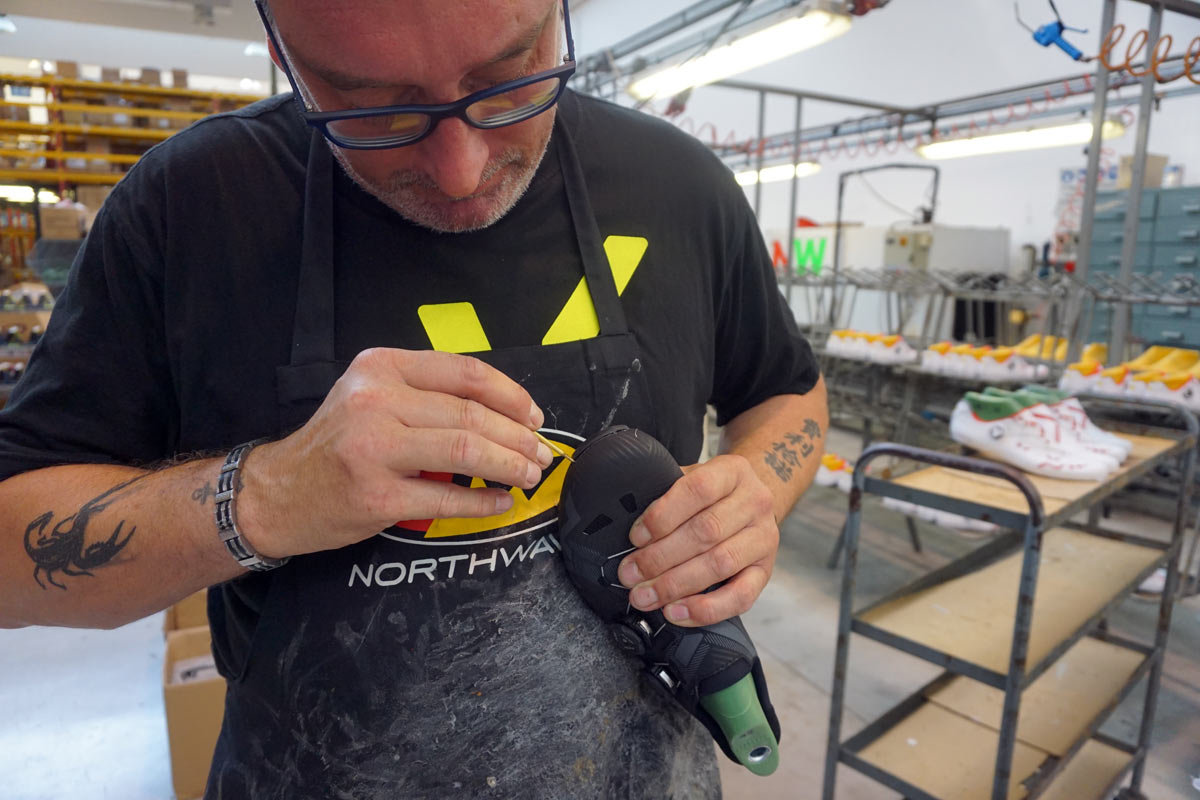 Once that’s done, the outsole is placed onto the shoe and they trace the shape to create an outline for gluing. They only want glue where the outsole will go.

On the left, a sanded shoe, and on the right, the upper section with glue on it. 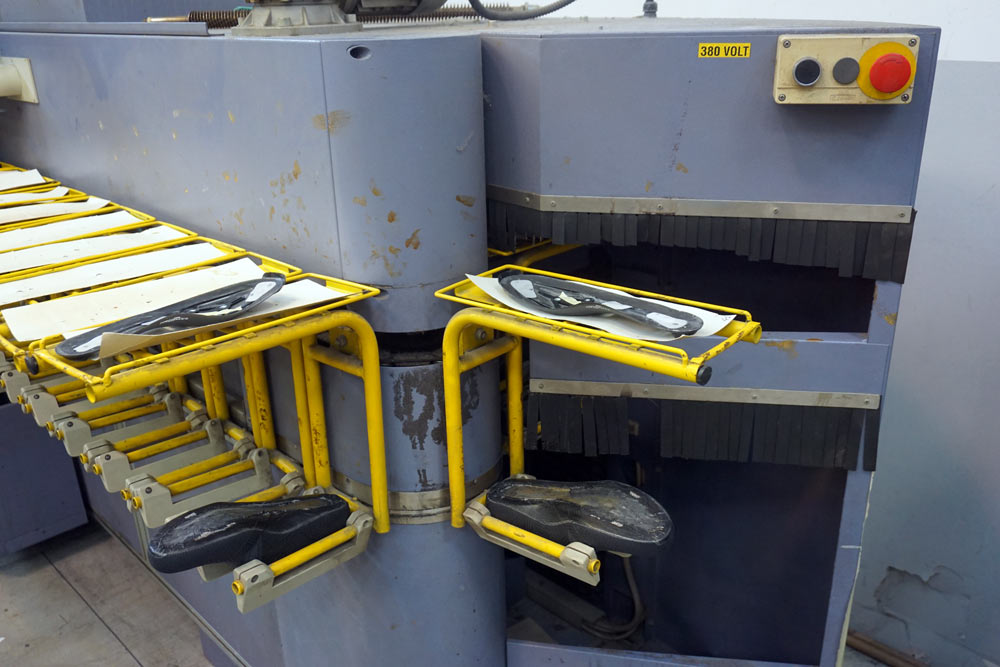 With both uppers and outsole glued, they’re run through an oven to start the setting process. They come out with the glue looking dry, but this isn’t the last time they get heated. 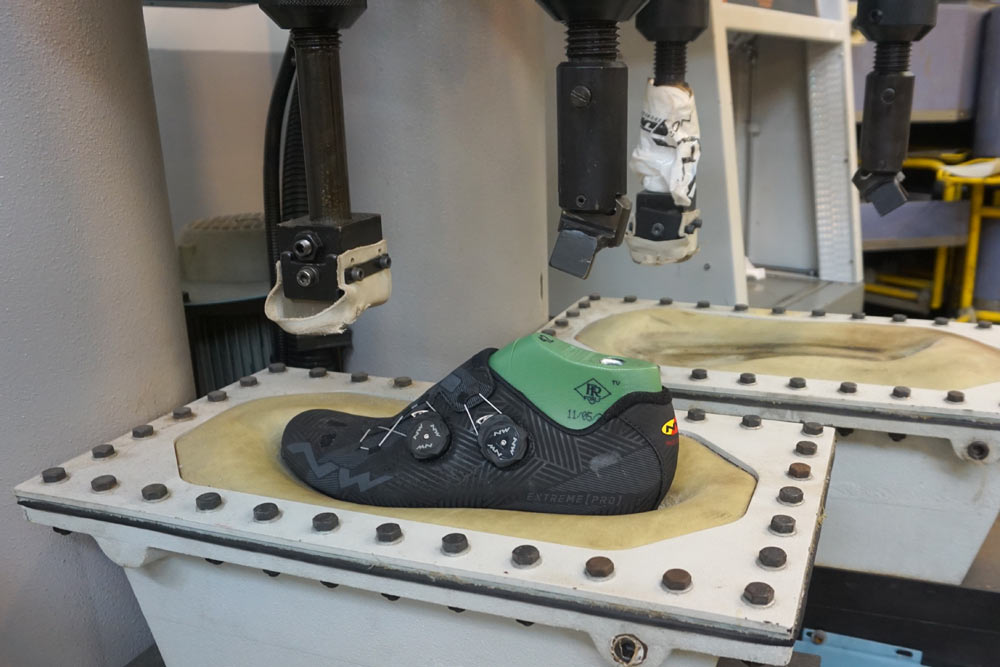 They parts are attached, then put into this machine that presses the upper down into the outsole at 70 atmospheres of pressure. It’s pressed into a firm squishy blob that conforms to the shape and ensures even pressure across the entire foot bed. After this, they are cured in the over for four hours. Once cool, they’re ready to wear. 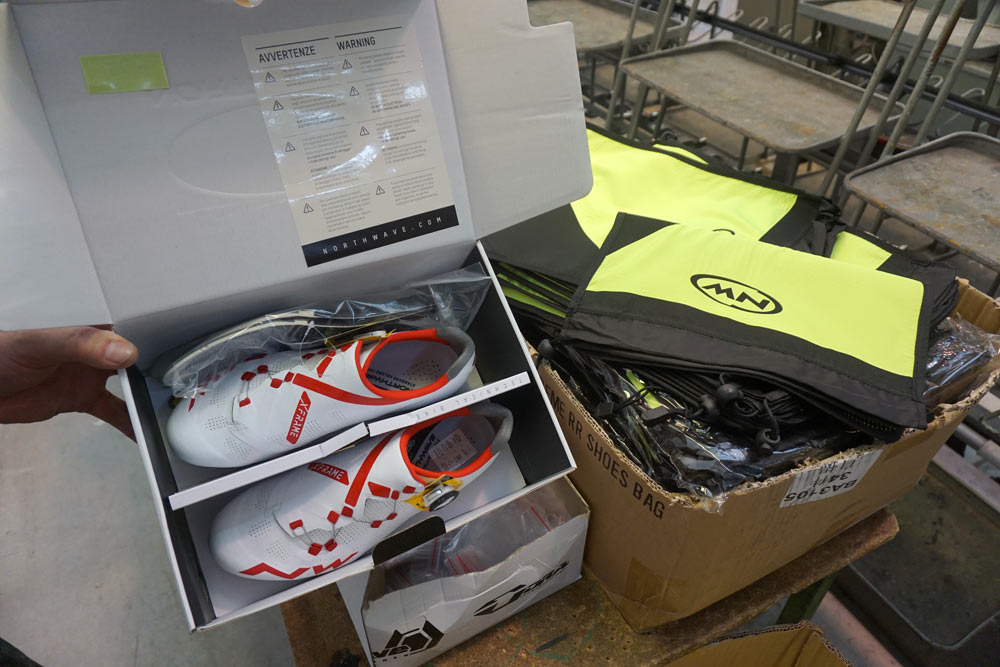 Insoles are inserted, boxes assembled, and goodies placed alongside them, then they’re ready to ship!

Huge thanks to Northwave for the hospitality!

I miss making custom cycling shoes. The process here is very similar to what I did.

Some of the best shoes I’ve ever worn. I’d gladly buy their road shoes if they’d switch back to BOA dials as it takes a week and a half and 17 dollars to order the replacement dials off some guy in Italy on Ebay for my MTB shoes.

BAH!!! If you only KNEW what it means to ride THE BEST on Earth…be it a tempramental perfect brand new Ferrari…or my brand new 2018 Record brakes that do not fit over a CorsaCX tire due to the failures of Reynolds and Litespeed….if only I had my litespeed built in italy…

Yeah its definitely not Campys fault…..