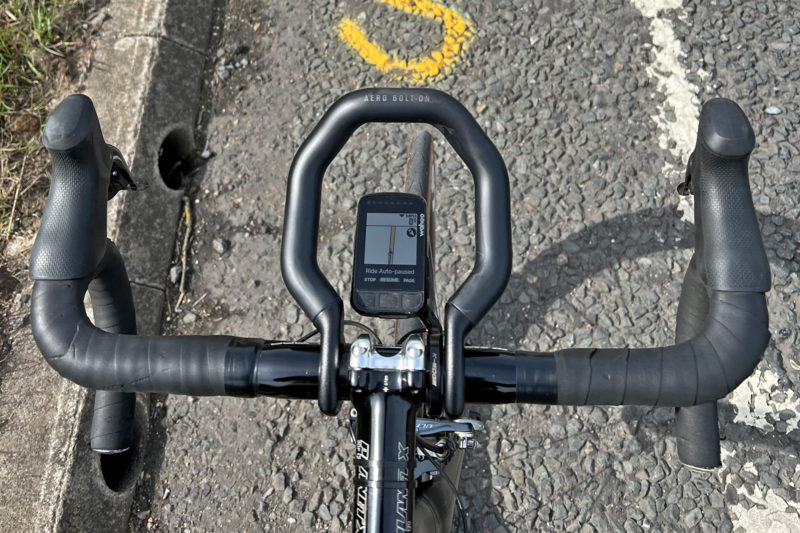 Farr extends their mini clip-on aerobar farther out in front with a new longer Carbon Aero Bolt-On Large with a revised shape offering more hand positions. Apparently, we weren’t the only ones asking for a slightly longer mini aerobar, so Farr has stretched out their original lightweight Aero Bolt-On to get your hands about 5cm further forward for a more aero tuck and a more comfortable position to help take endurance racing farther… 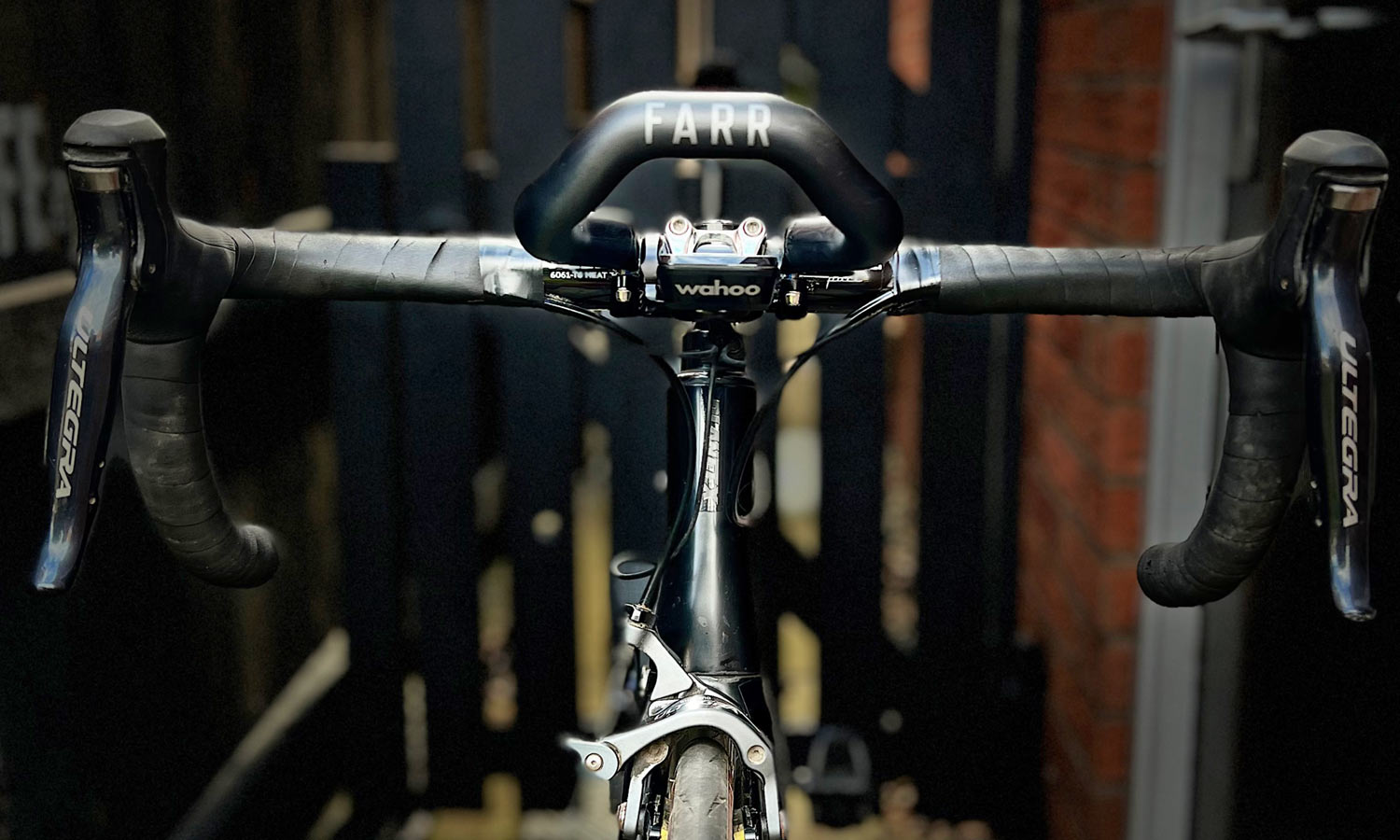 c. Farr, all bike photos by Tony Rees of TheRaceForTheCafe

Last fall when we reviewed the original Carbon Aero Bolt-On combined with Farr’s Arm Rests, one of the only real downsides we hit on was that the tiny aerobar was just a bit too tiny, not quite extending far enough forward for an optimal position. Part of that had been an original effort to keep the little bar from extending forward beyond your brake hoods, but really Farr just wanted to keep it as light and small as possible.  But in the last 4-5 years, Farr has seen more cyclists riding far(r) and adapting & customizing their cockpits for ultra-long-distance ride efficiency and endurance racing comfort, so it was time to revisit the little light aerobar. 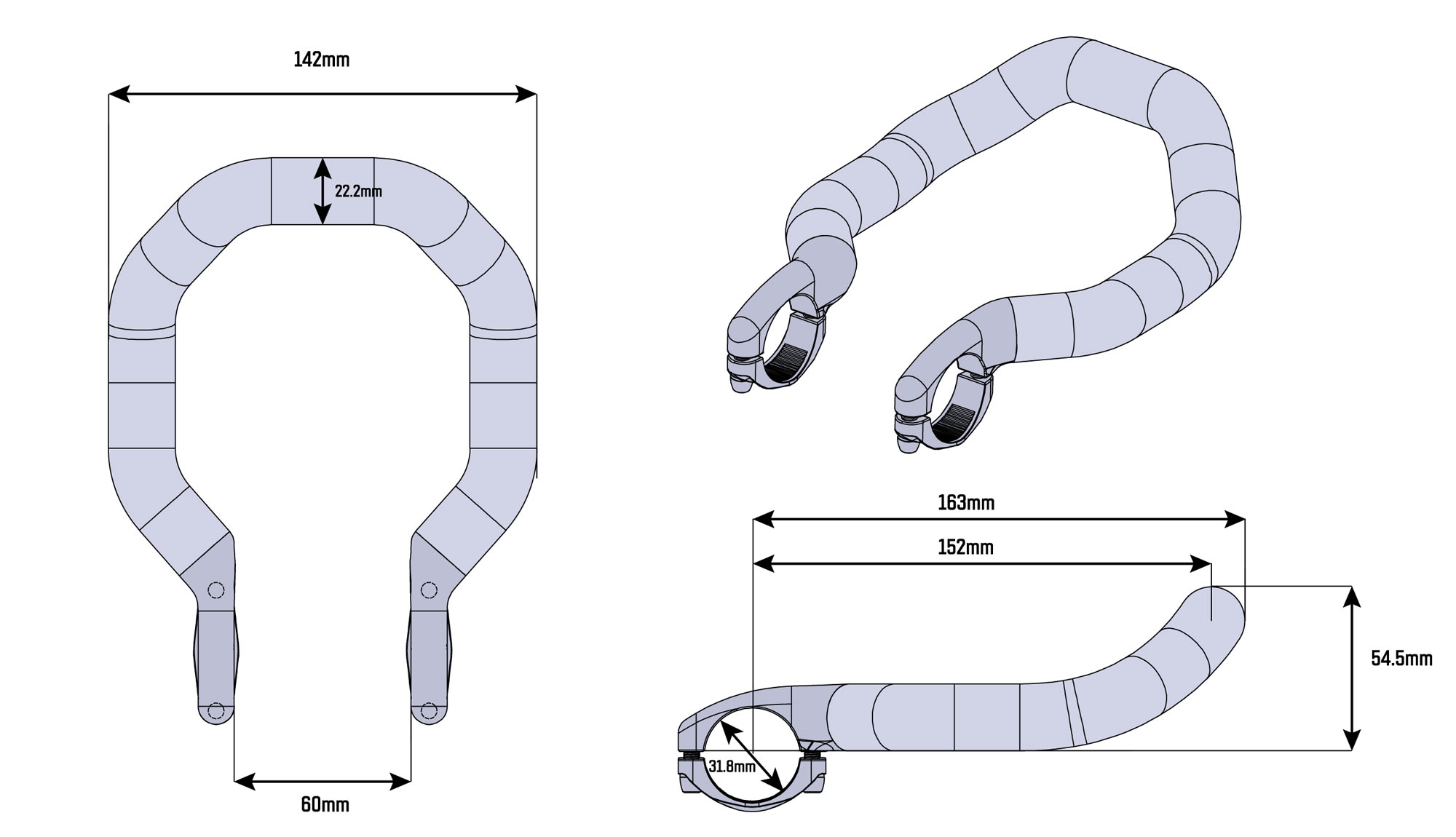 The new Farr Carbon Aero Bolt-On Large now extends 152mm forward from your 31.8mm handlebar, measured center-center (vs. 104mm for the original carbon or 108mm for the alloy Aero Bolt-Ons.) Farr says, “it does NOT extend past your brake/gear hoods on a drop bar bike”. We mostly agree with that, but you results may vary. We measured 10 road, CX & gravel bikes in the office with Shimano, SRAM, Campagnolo & Rotor groupsets, and just one gravel bike with Campy Ekar & one cross bike with Campy Athena 11 popped up with under 160mm from the center of its bar to the front of the levers. 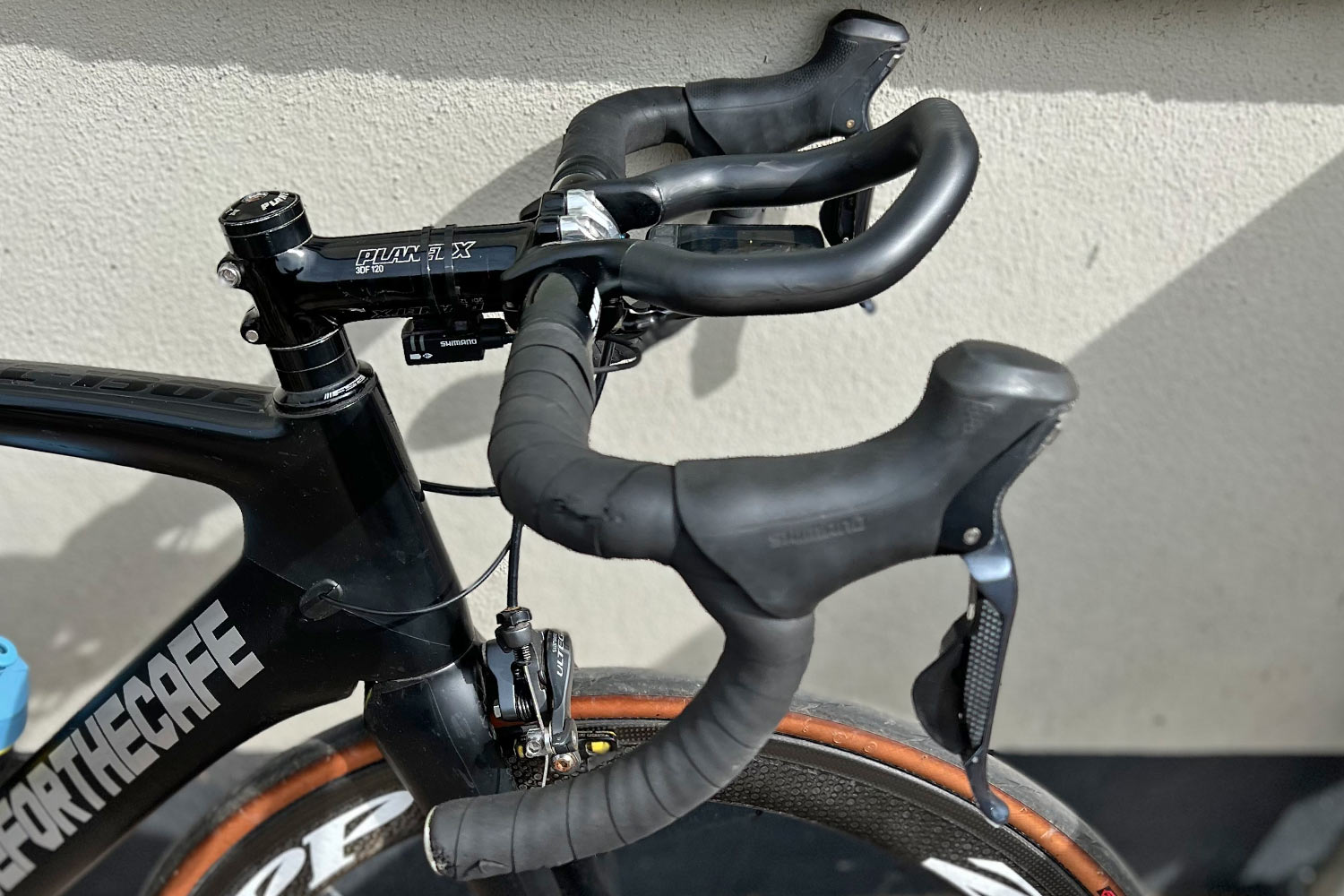 It also rises around 5cm from the center 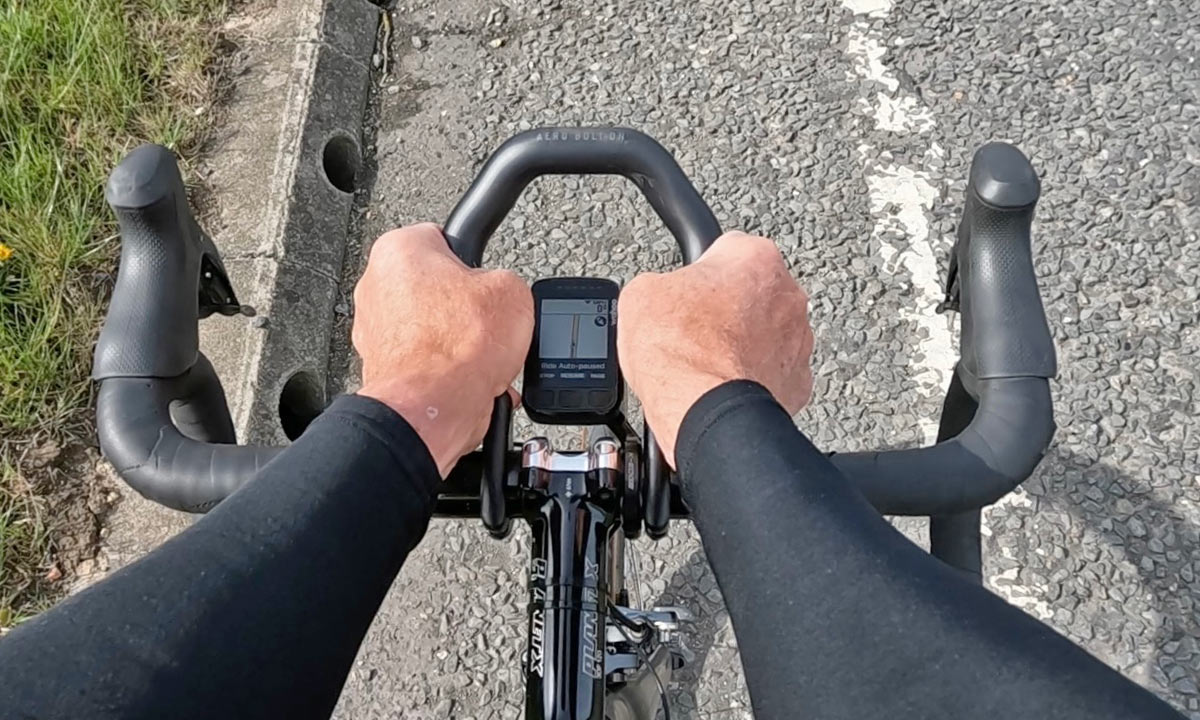 Overall the new Carbon Aero Bolt-On Large is actually a few millimeters narrower than the smaller Carbon Aero Bolt-On. But it adapts the same round tube shaping of the alloy version meaning there is more space inside the loop – now almost 10cm wide inside the middle. And especially, there’s much more flat room in the middle to hook your thumbs around the front of the Aero Bolt-On loop, which rises just under 4cm from the top of your bar in a flat setup. 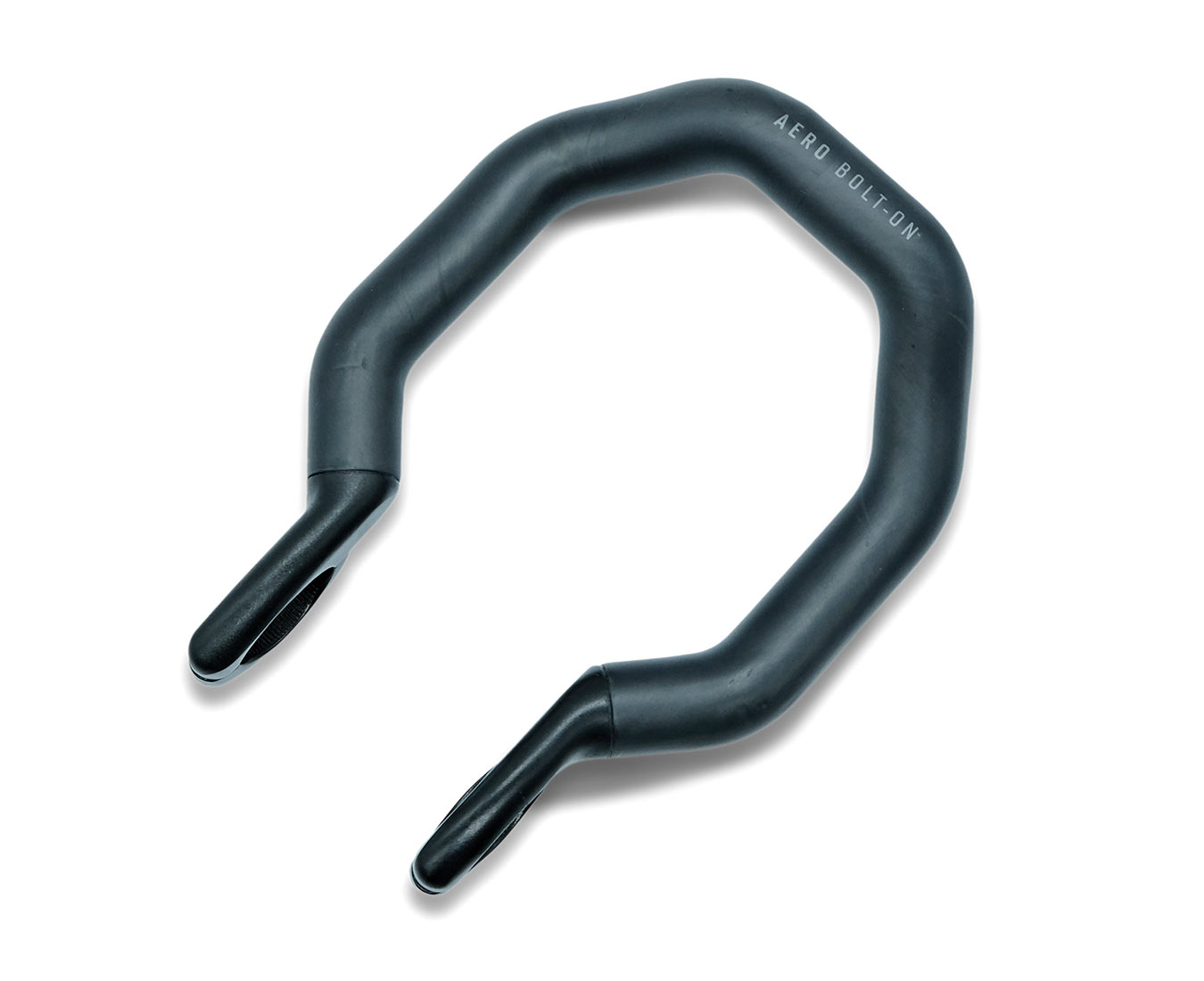 The Carbon Aero Bolt-On Large is constructed of a single ergo-octagonal shaped carbon loop bonded into low-profile alloy bar clamps. The carbon loop has a 22.2mm round section, so classic flat bar or standard aerobar extension mounts will fit on the flat sides or out front. 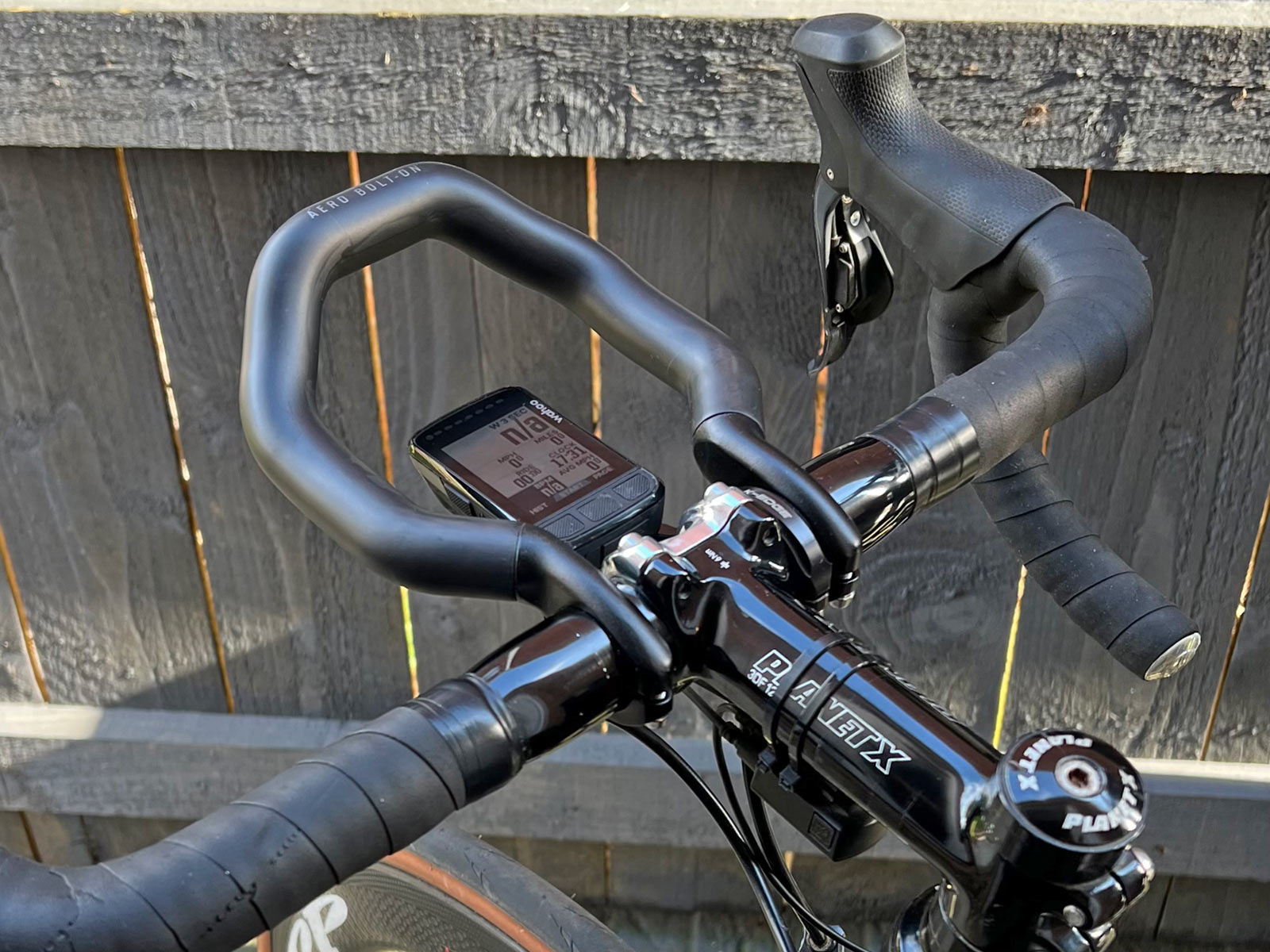 The 31.8mm clamps to the handlebar are still spaced 70mm (c-c) making it direct-mount compatible with Farr Arm Rests or Headspace stems. But they now have 60mm clear between the clamps so you should be able to fit most out-front mounts next to your stem, protected inside the loop. 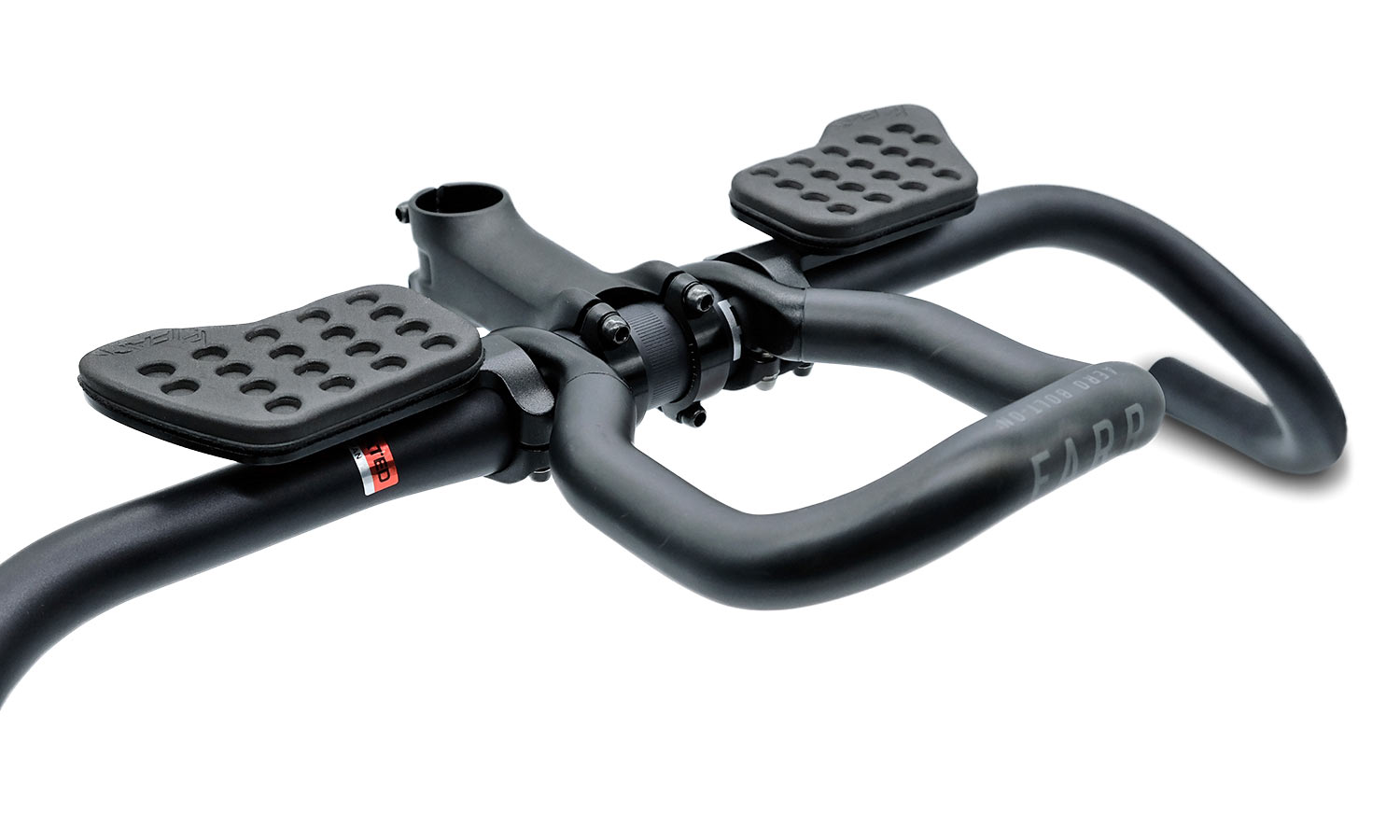 Farr has also quietly added a new direct Top Mount version of their Arm Rests for the same price as the originals that clamp directly to your 31.8 bar, and can be mounted next to the new longer Aero Bolt-On if you have enough extra clamping area. 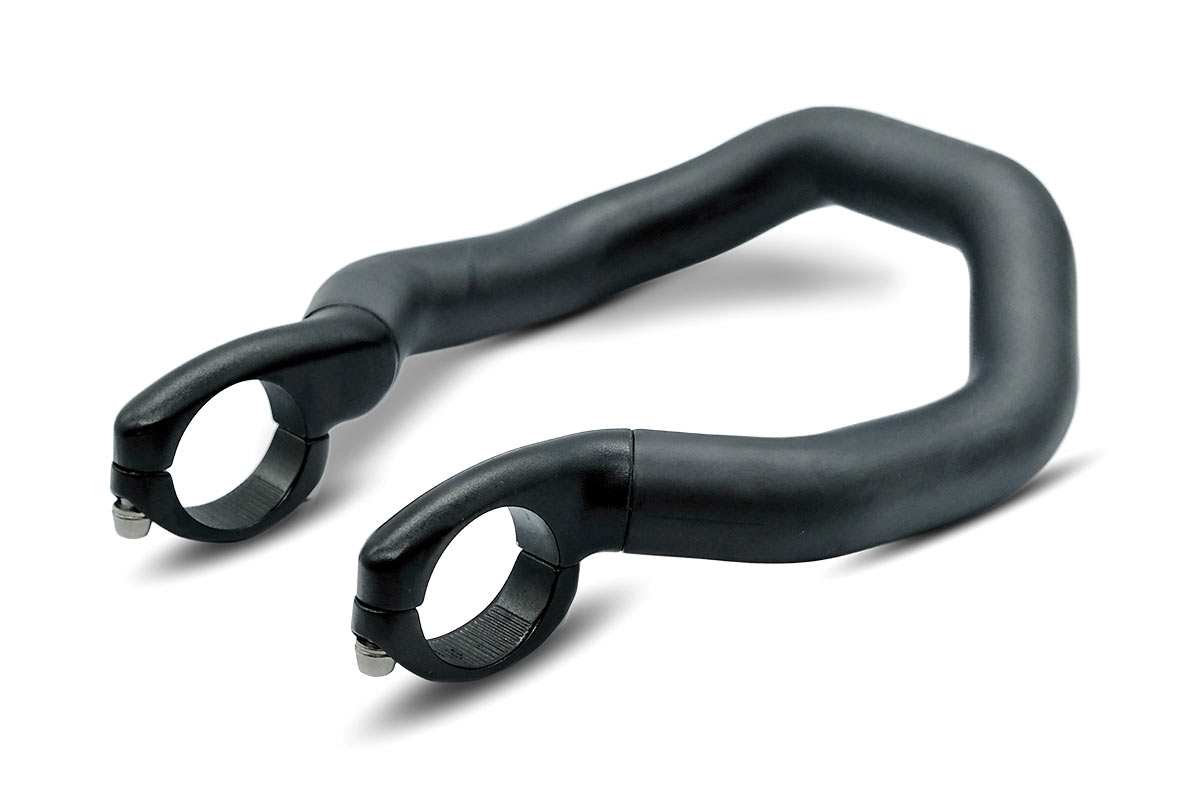 All the longer and wider position upgrades & alloy clamps add about forty grams over the original smaller all-carbon or five grams over the smaller alloy version. That puts the minimalist Carbon Aero Bolt-On Large at still only 138g making it lighter than almost every conventional aerobar setup.

What difference will a few centimeters make? 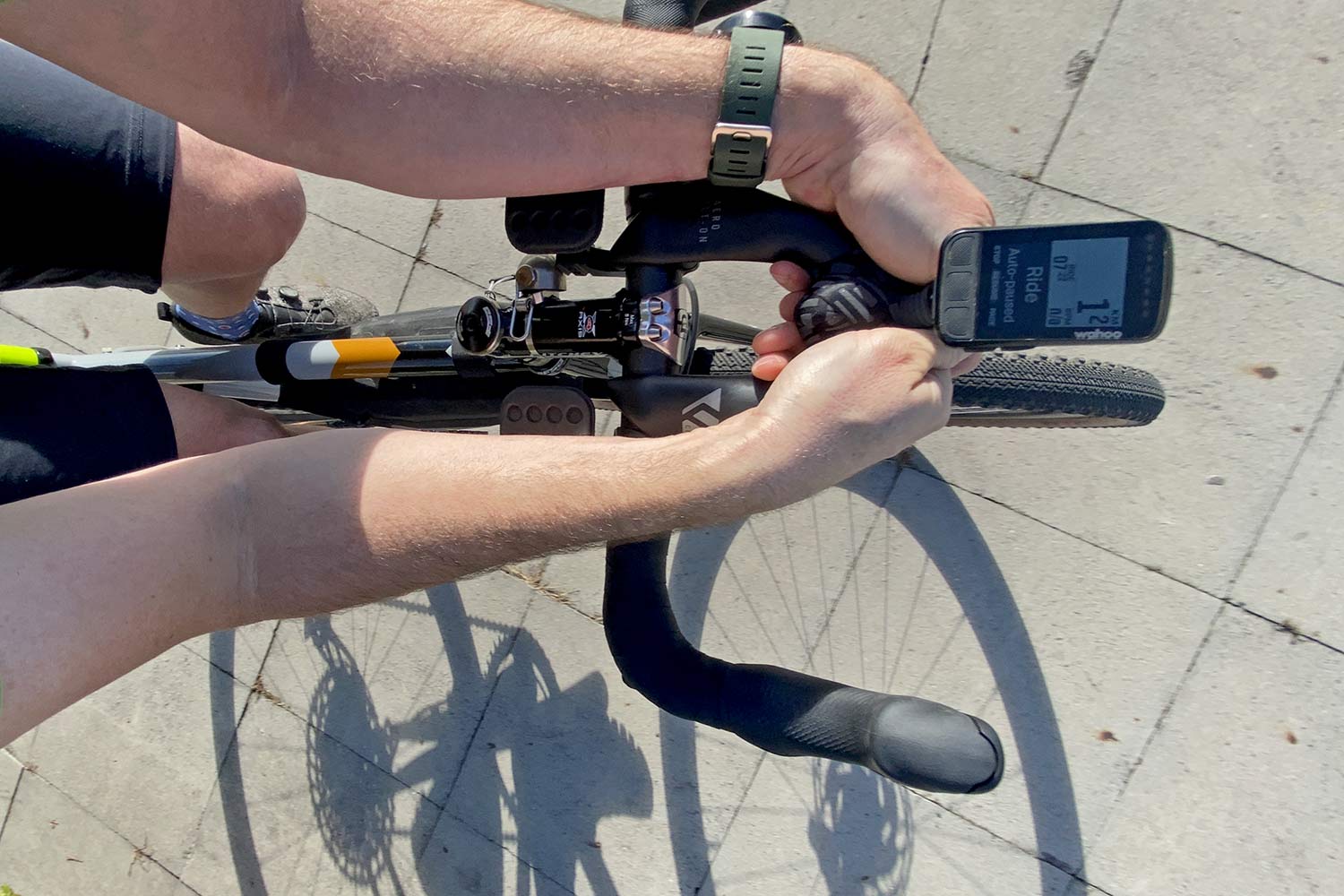 Combining that ~5cm longer position with the wider front loop compared to the carbon original should mean one full hand position further forward. That would be perfect for riders like me who had sought out grip over the front of the original. The real downside of the original for me was that the shorter position meant that my knees would just hit my elbows in an aero tuck, requiring me to move to a 1cm longer stem. Now, I’ll be able to move back to my ideal reach to the bar tops & hoods for a better all-around fit, while still getting an improved fit in the further forward aero tuck. #marginalgainz 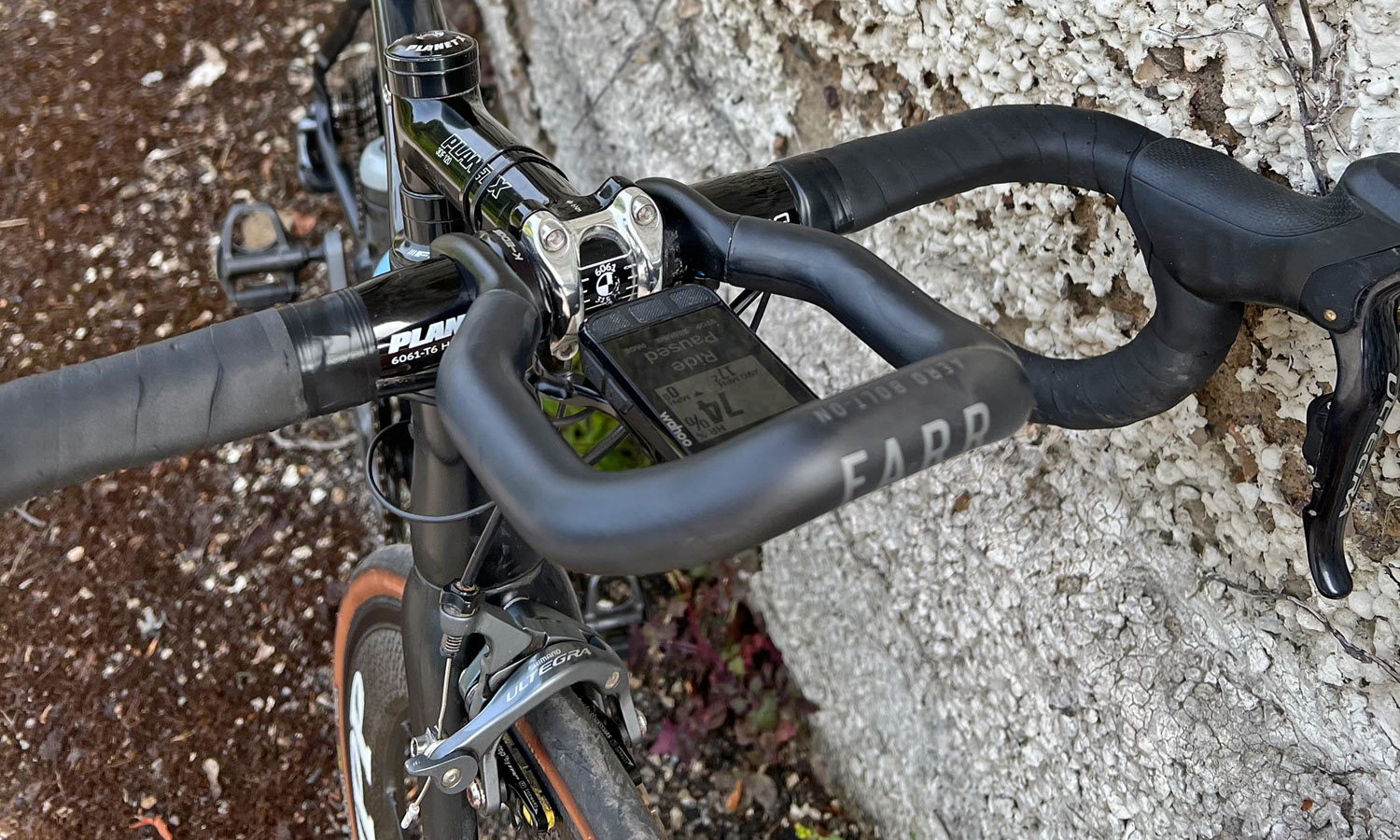 The new Farr Carbon Aero Bolt-On Large isn’t quite ready to clip onto your bars right away. But you can pre-order the newly larger mini aero bar for $150 now (yes, that’s $15 cheaper than the shorter one) with deliveries on track from the middle of June 2022, just over a month away. Farr also has a $75 articulated GPS mount that can position your cycling computer pretty much anywhere/way you want off the front of the new aero bar, or you can use any 22.2mm round clamp mount.

Questionable use case for these for endurance racers, no real benefits compared with adjustable clip on bars (like profile designs, deda) other than weight. Over ultra-distance I’m not sure an extra 500g has ever slowed me down much, discomfort definitely has, resulting in more time off the bike. Loading through the forearms on the aero bars without shifting your pelvis angle onto the nose of the saddle is a challenge unless you can get risers under the aero bars. You need to keep your wrists neutral as well otherwise you’ll find your fingers going numb after a day or two or (worse) lose grip strength, so more rise than this is required IMO.

Exactly. No benefits at all. But that’s kinda their mission statement.

Looks kinda like an extra hoods position that doesn’t let you get as low.

*Spinaci has entered the chat*