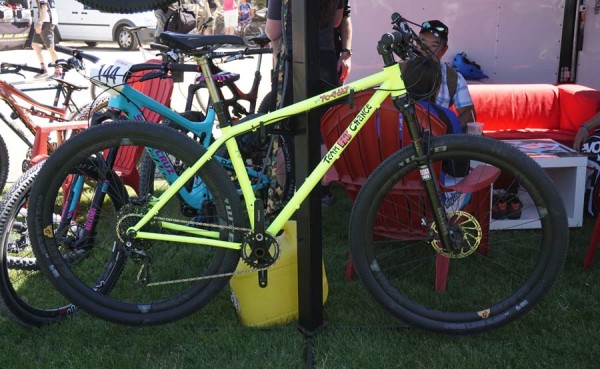 When they made their debut appearance at NAHBS this spring, the new 2015 Fat Chance Yo Eddy looked good, using a True Temper steel frame in both 27.5 and 29er sizes. One common attribute was the very short 433mm (17.04″) chainstays, which made for some very tight rear tire clearance on the 29er.

Chris Chance listened, and he’s reworked the 29er’s seat tube with a slight bend, opening up space for improved mud and debris clearance. It’s not enough to up the tire allowance, so 29×2.25 is still about the max recommendation. But it does lead to other changes… 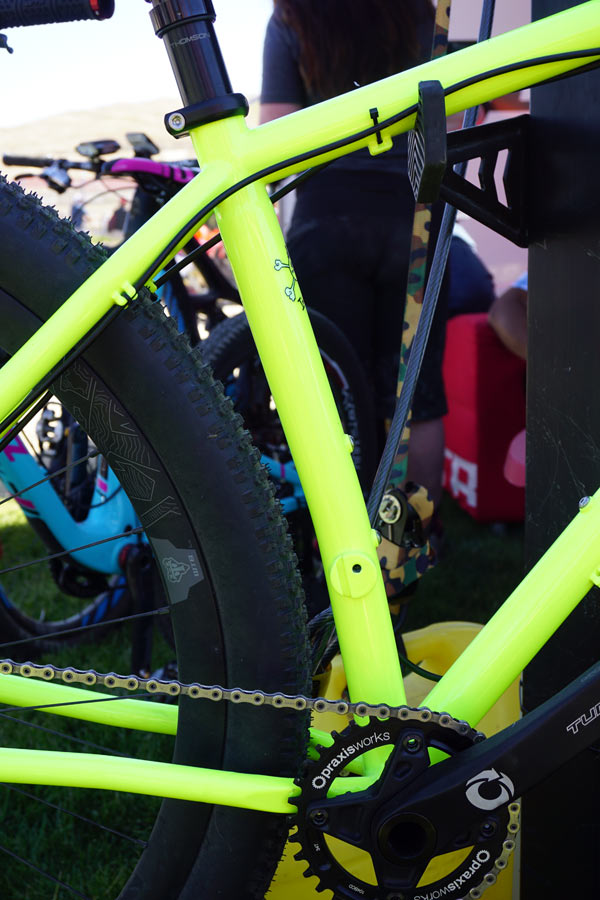 Aaaaahhh, that’s more like it. While that may have opened up room for a front derailleur clamp (barely), they went ahead and added a direct-mount FD mount to the seat tube should you want to put more than one chainring up front. 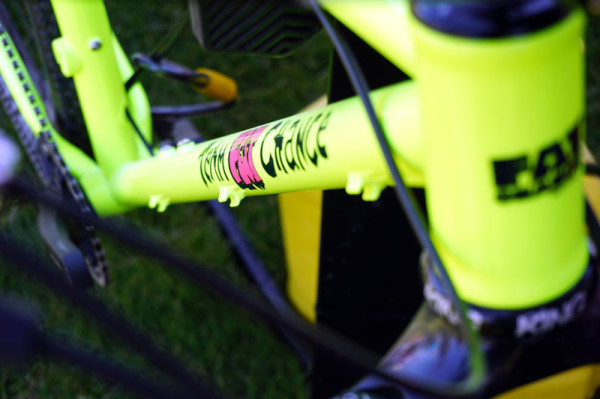 That means they had to add cable routing for a front derailleur, too. It runs along the downtube with full housing. The dropper post remote line runs on the other side of the downtube and into the port on the bottom of the seat tube for a stealth post.

I assume they boosted the clearance as opposed to a move to the Boost standard? Boost is a dirty word these days, gotta be mindful of usage.

The position of those downtube housing guides look like they’d rip your leg to shreds if you hit them. Just put them all the way under the downtube.

My first real MTB was a Fat Chance Kicker back in 1981 if I recall. Had a Wicked model later on as well. But for some reason I cannot get excited about these bikes. Perhaps it is that I know a lot more than I did back in the 80’s? Or maybe because you can buy a full custom steel frame for far less?

That display bike does a good job of making the case for longer head tubes. Enough with the tiny head tubes that force people to use stacks of spacers.

Just give up already. 2.25 Max?! Horrible cable guide placement, so-so geo; it’s like Chris forgot about bikes when he stopped making them. I love my old Buckshaver, but the new Fat[Chance] bikes are not lust worthy.
Shame.

@alex your out of your mind! There is a reason for low stack. Unless your 7′ tall it shouldn’t be a issue

Darn, had I just spent the money on a custom bike instead of paying the same money for a Fat chance, I could have gotten all these fixes and features built into my bike in the first place.

that color makes my eyes hurt

I would usually say the trolls are out in force with the comments but they are not far off. The routing of the cables seem strange and I know that w/o a doubt Chris Chance knows more about bike design then I could hope to but I am just not very inspired by the end product. It still looks 100% better then the Domahidy

Is there enough clearance for that crown to rotate?