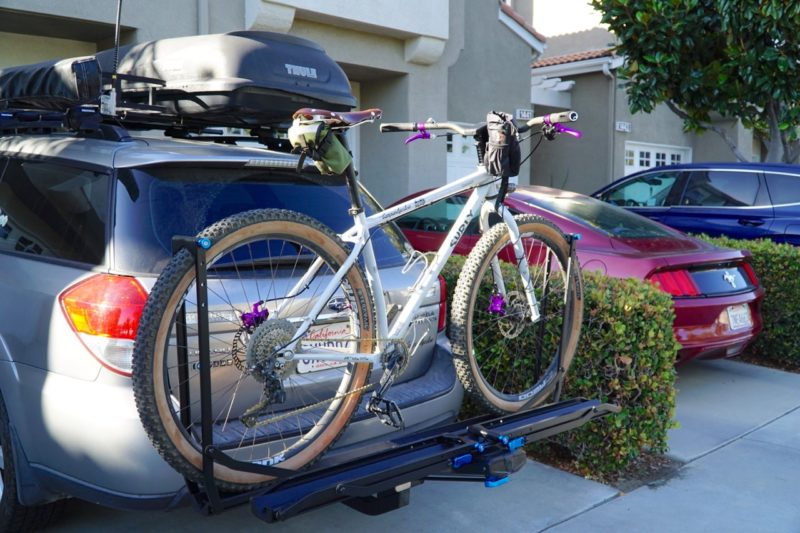 A few weeks ago, I was offered the opportunity to review the new Rocky Mounts GuideRail 2″ but was reluctant to do so. The reason being, I already owned a 1Up Super Duty Double that I bought about a year ago, and they were, what seemed to be, very similar racks.

I loved the simple aesthetic of both the GuideRail and the 1Up SD Double… I mean, that’s what attracted me to the 1Up originally.

But, how they look and how they hold the bikes, are where the similarities between the two end…

I don’t feel like I’ve had the GuideRail long enough to do a review yet, but I did want to give you guys my first thoughts on the install and some of the glaring initial differences between the 1Up and the GuideRail. 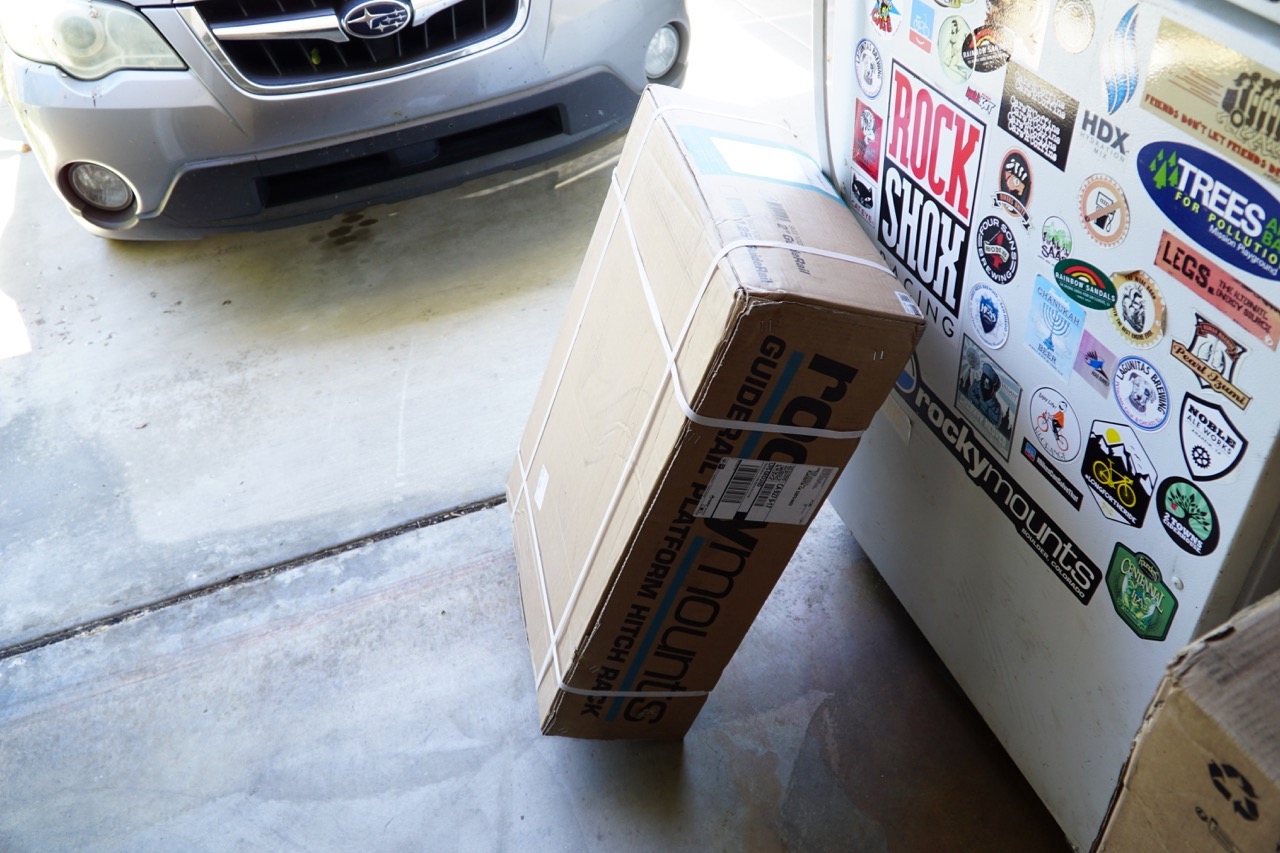 The GuideRail came in a relatively small box. 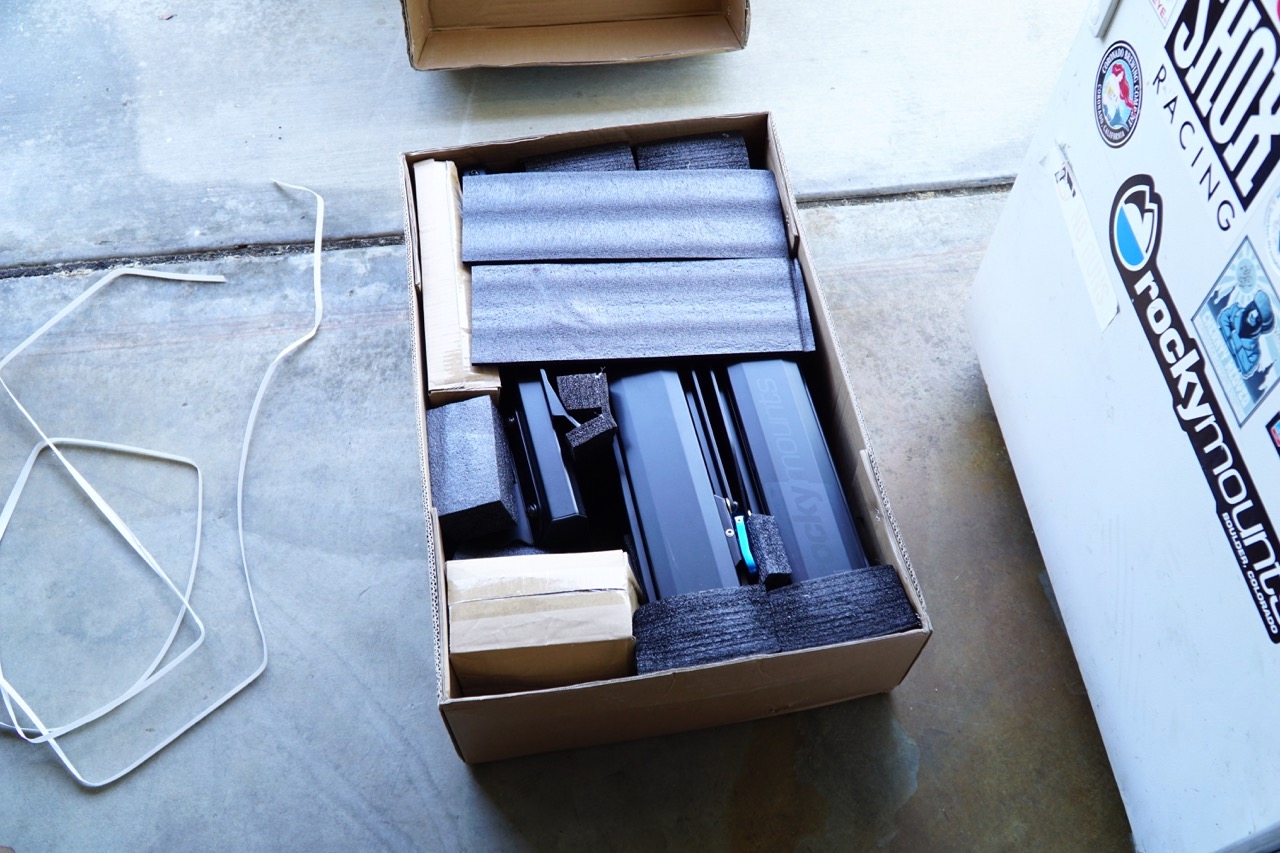 My first thought when it arrived and I grabbed it from the UPS Driver, was that it was surprisingly light. The box was small, so I thought there were going to be a lot of actual rack parts to assemble. 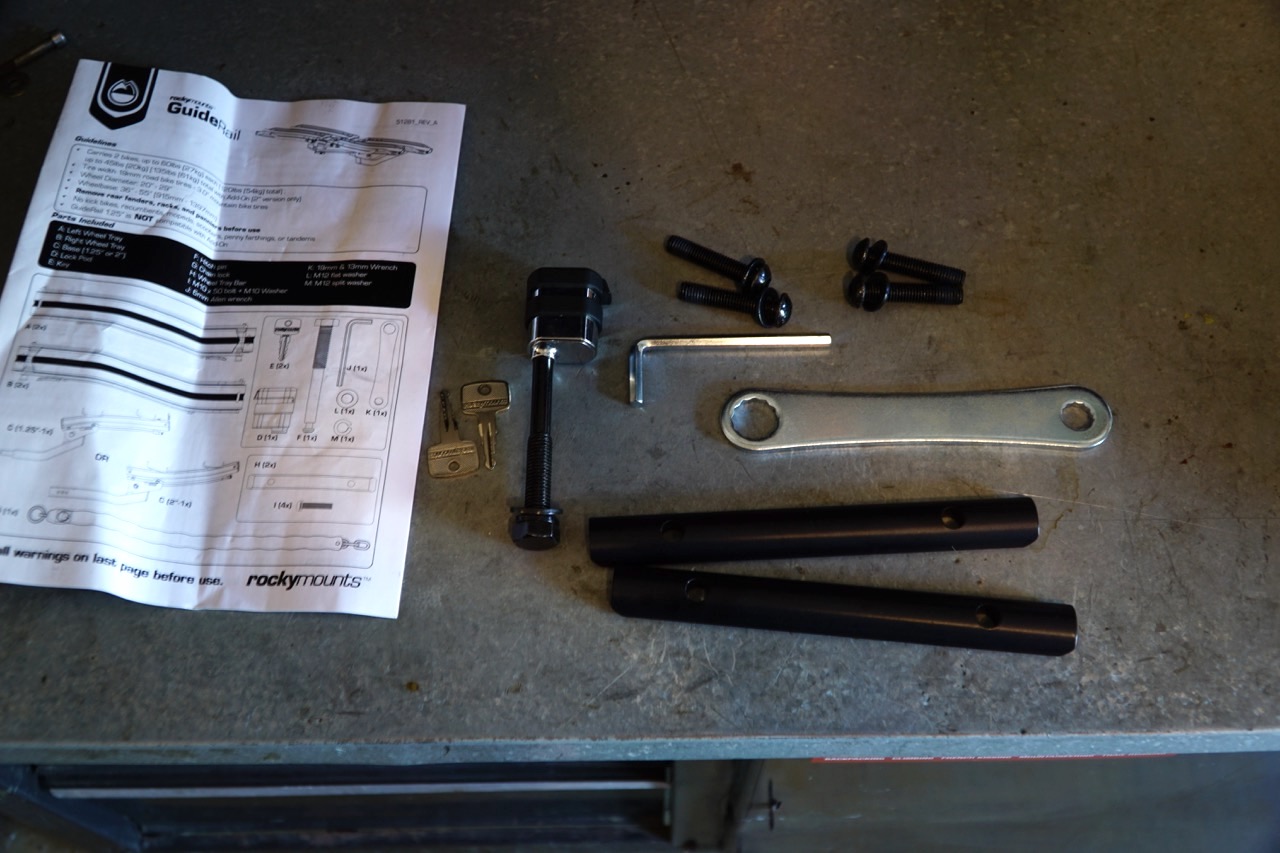 Not too many small parts to deal with. The directions were stellar!

And I was right, there were quite a few actual rack pieces that needed to go together, but taking the rack down to smaller parts is what kept the box small and easy to ship. So kudos, Rocky Mounts.

When I opened the small parts box, I was pleasantly surprised at the small number of parts that were in the box. The assembly directions were really good. To be frank, the design and assembly of the rack were so intuitive that I didn’t really need the directions to assemble anything… it seemed really obvious how it was going to go together. But I followed the directions regardless. 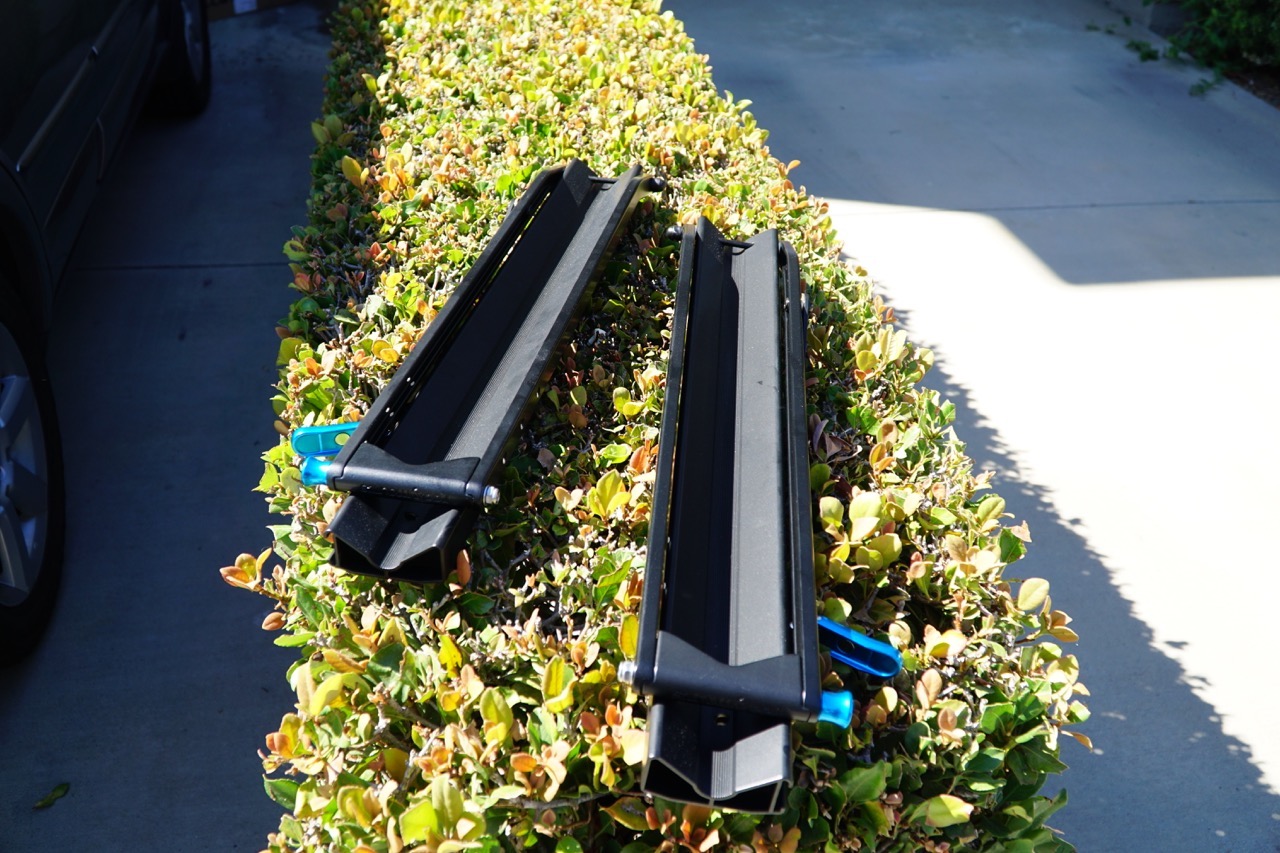 Two half-trays equal one full tray. They seem to be high-quality aluminum.

Upon removing parts from the box, I found myself inspecting for any plastic parts. For me, being a 1Up bike rack owner, “no plastic” was always a big deal. But as I looked at everything that I was unpacking, I noticed that very, very few of the parts Rocky Mounts used in the design of this rack, were plastic. There is a lot of attention to detail, all the way down to the brass washers used on all of the pivot areas. 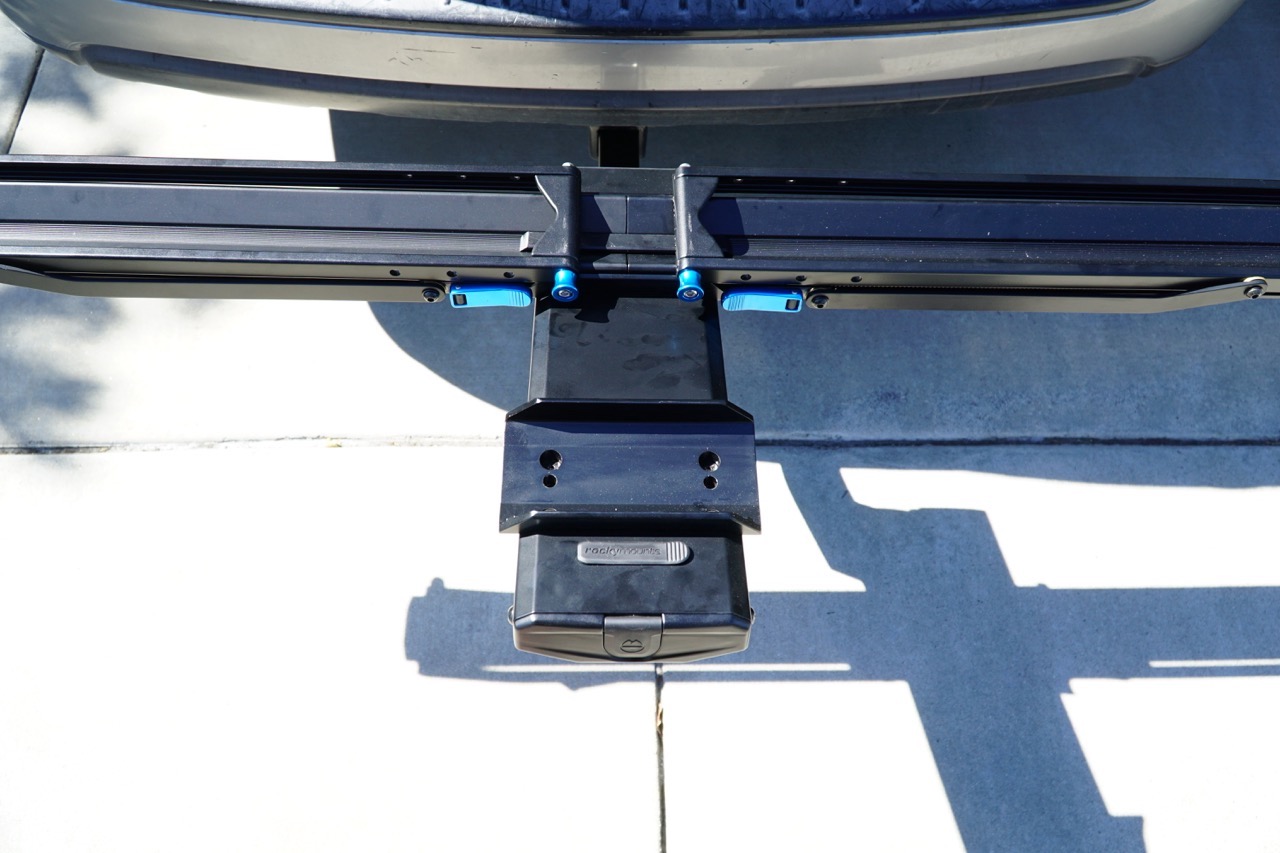 The rack came in basically 5 main pieces (not including small parts), the hitch/tray base or “spine”, and four “half trays”. The installation was so simple and intuitive. I slid the spine into the 2″ receiver and used the blue spine handle to lower the rack into the “use” position. Real quick… all of the “touch points” on the rack are anodized blue, that’s a nice touch and I think really adds to the overall aesthetics of the rack. 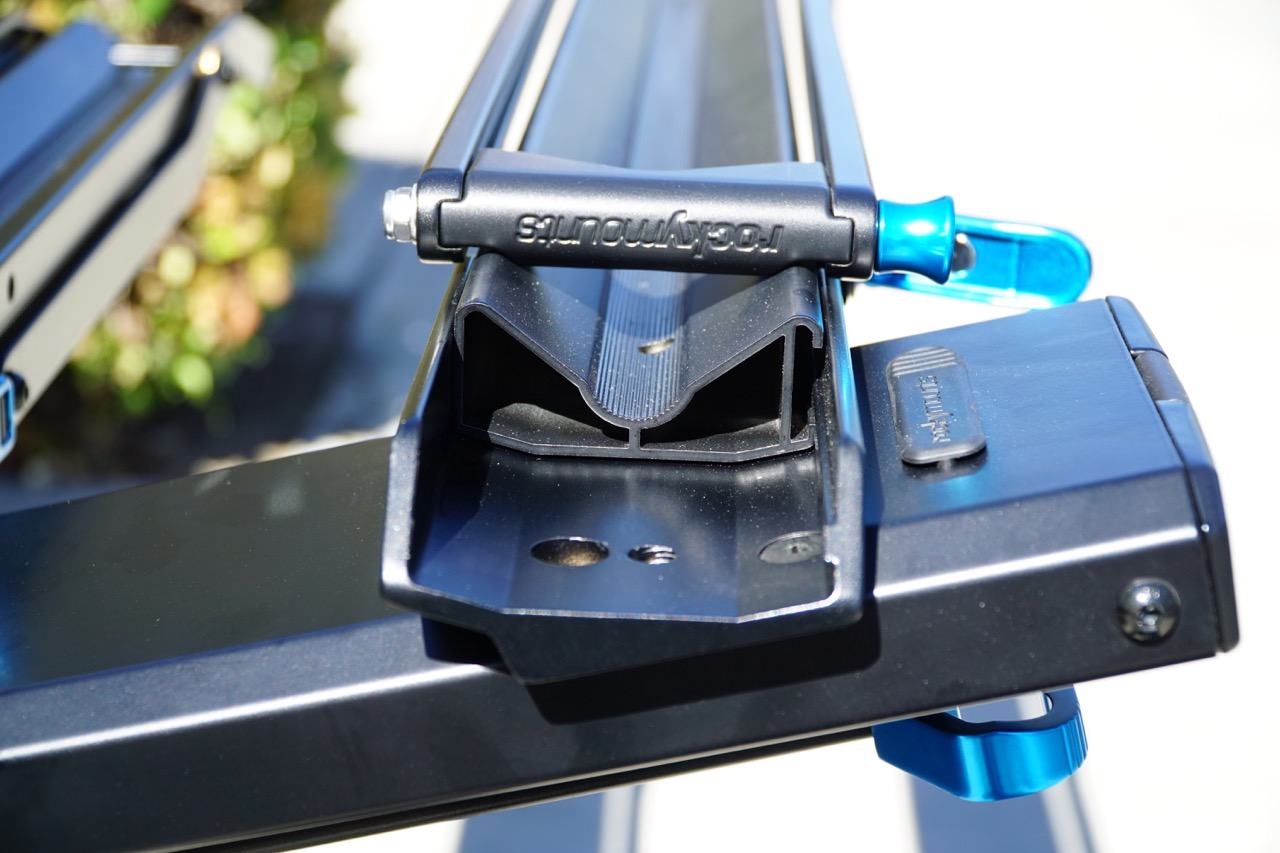 Each of the half trays slides onto the spine from either side. 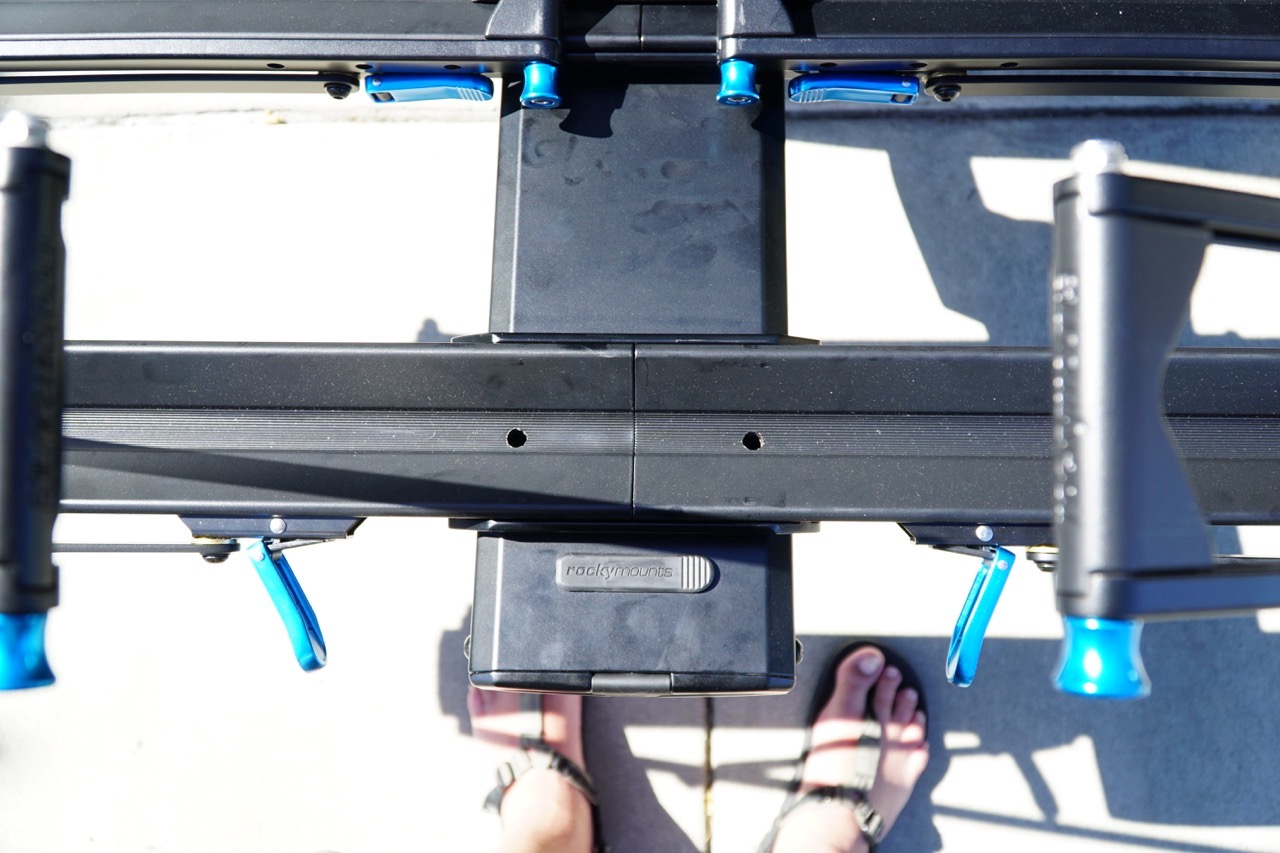 Lining up the holes.

You slide the trays onto the spine from both ends, having them meet in the middle and line up with the mounting holes. Once they are lined up, you take the “wheel tray bar” and line that up with the holes in the wheel tray. 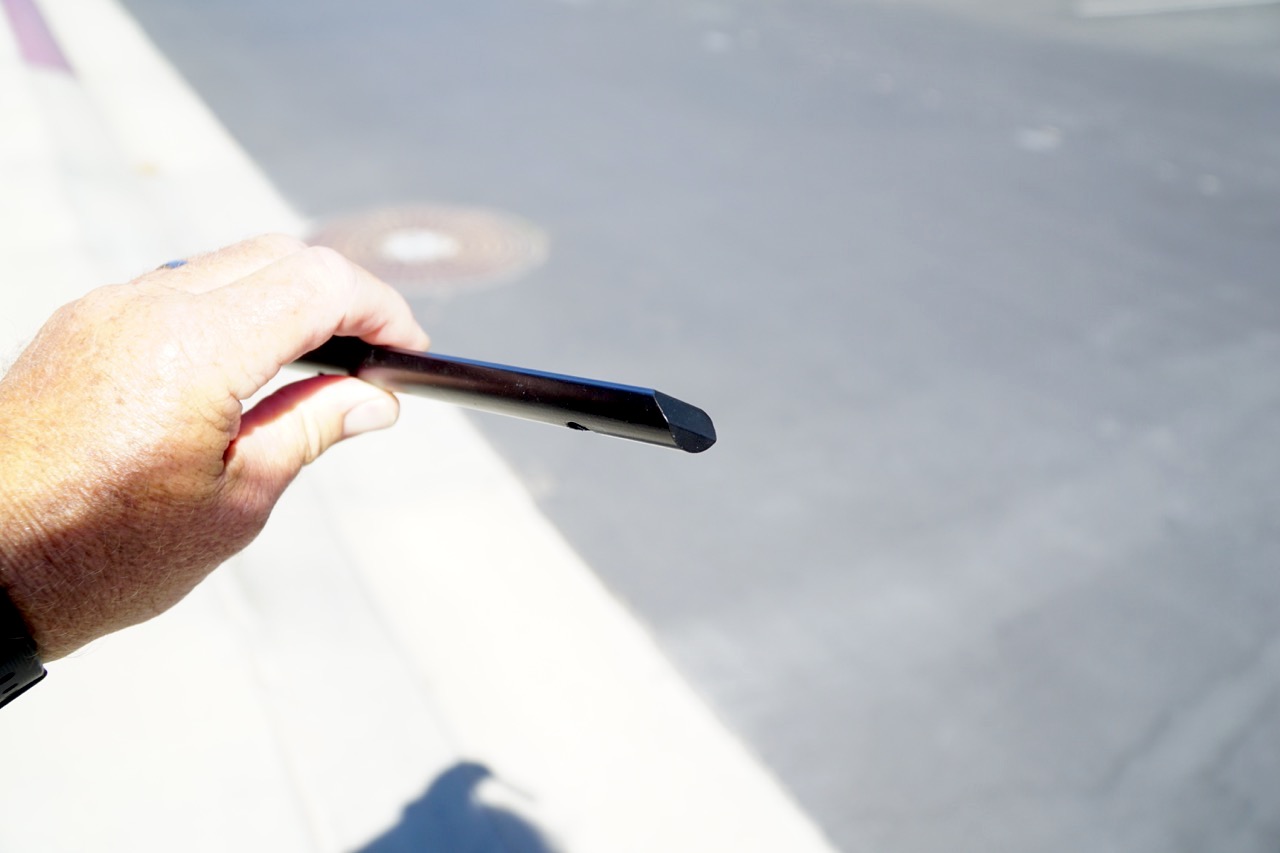 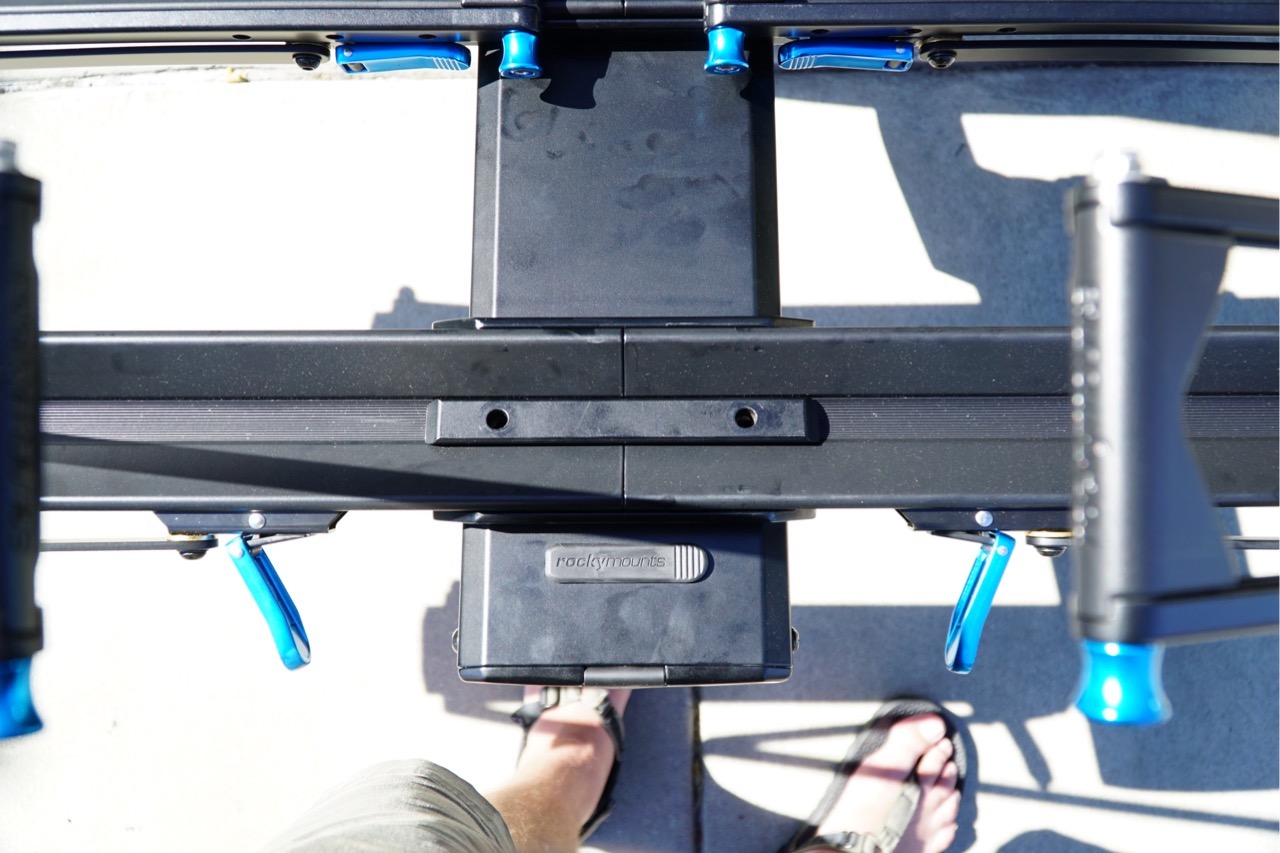 The wheel tray bar is in place.

After mounting the wheel tray bar, secure the two half-wheel trays to the spine. I am just showing the outer wheels tray here, but you would repeat this process twice for the inner and outer wheel trays of the rack.

Remember, this isn’t the review of this rack, I just wanted to give you the skinny on how I received it and the installation of the rack. But I also have some initial thoughts, below. 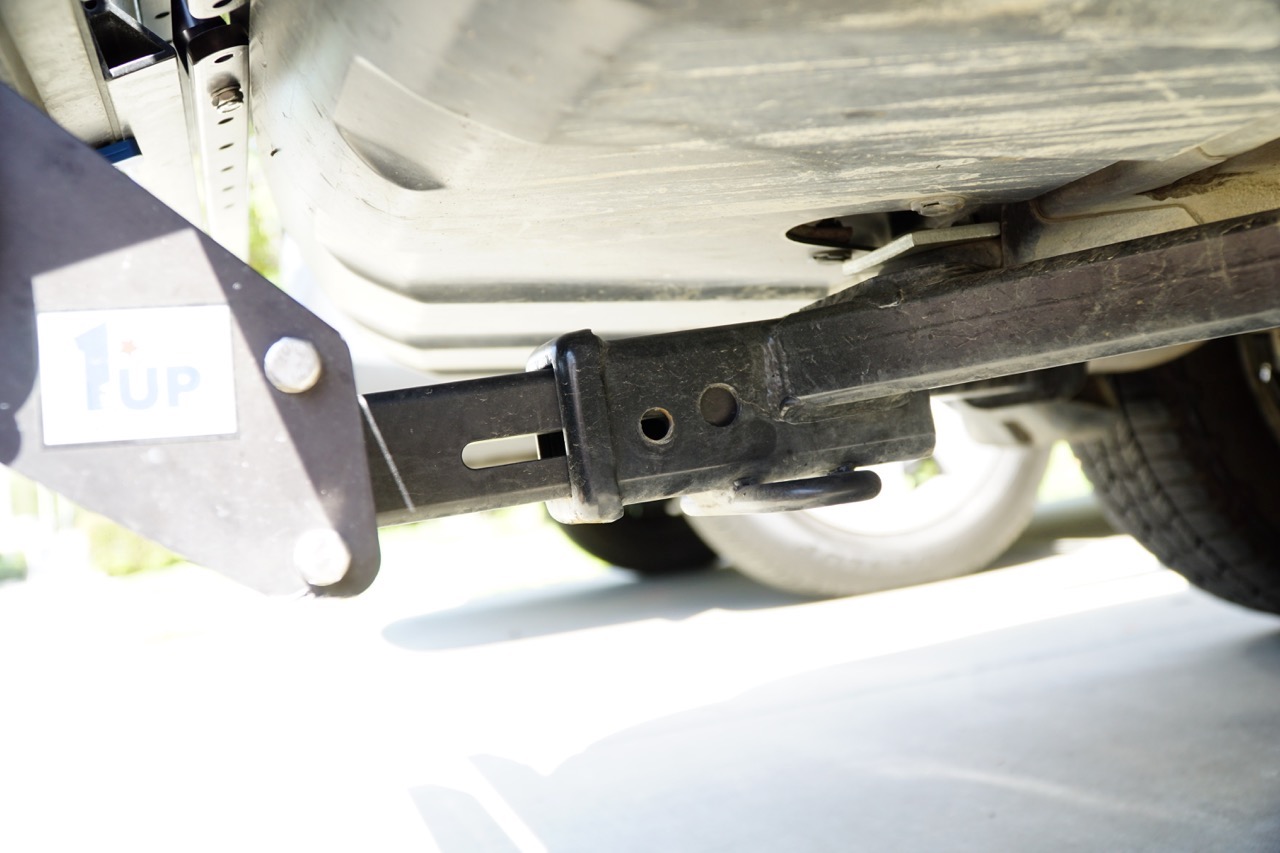 My 1Up rackl wouldn’t fit without modifying the receiver. An extra hole was drilled in the receiver to pull the 1Up rack out further to clear the bumper.

I drive a 2008 Subaru Outback named Shiela. The way the actual tow hitch/receiver is mounted to my Subaru is horrible. It sits really low, and very far under the rear bumper. That being said, the 1Up Super Duty Double would not fit and fold all the way up without modification.

It would, however, fit in the factory hole of my receiver with the rack folded down to the first slot, which 1Up calls the “extra clearance” position.

In their defense, they say that this “extra clearance” position is for larger bumpers or spare tires that get in the way of folding it to the “storage” position. 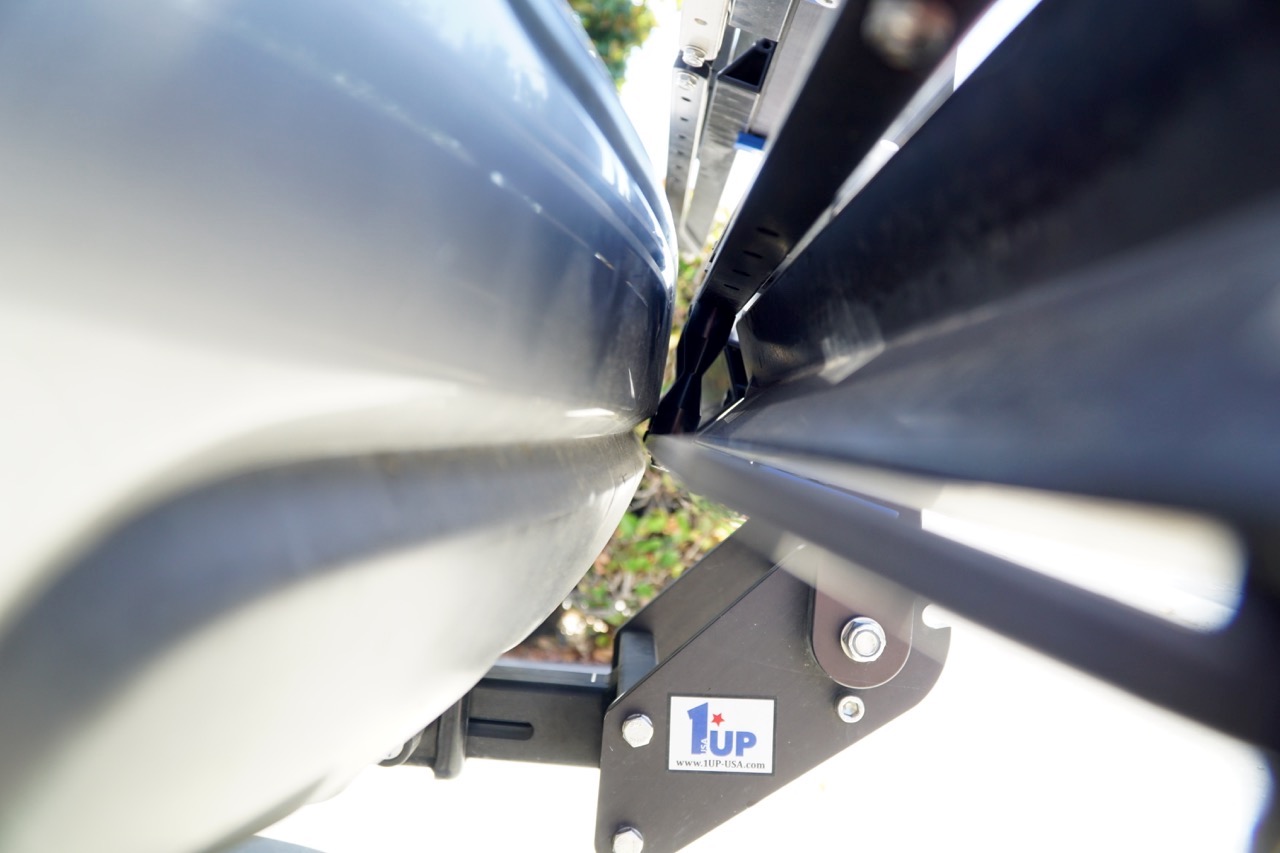 The 1Up rack still very close to not fitting, after the modification.

On the Subaru, the “extra clearance” position put the rack too far out and was aesthetically unpleasing for me. So, I opted to modify my receiver and drill an extra hole. When it’s closed in the “storage” position and pulled all the way out in the slot on the rack… it’s still really close. 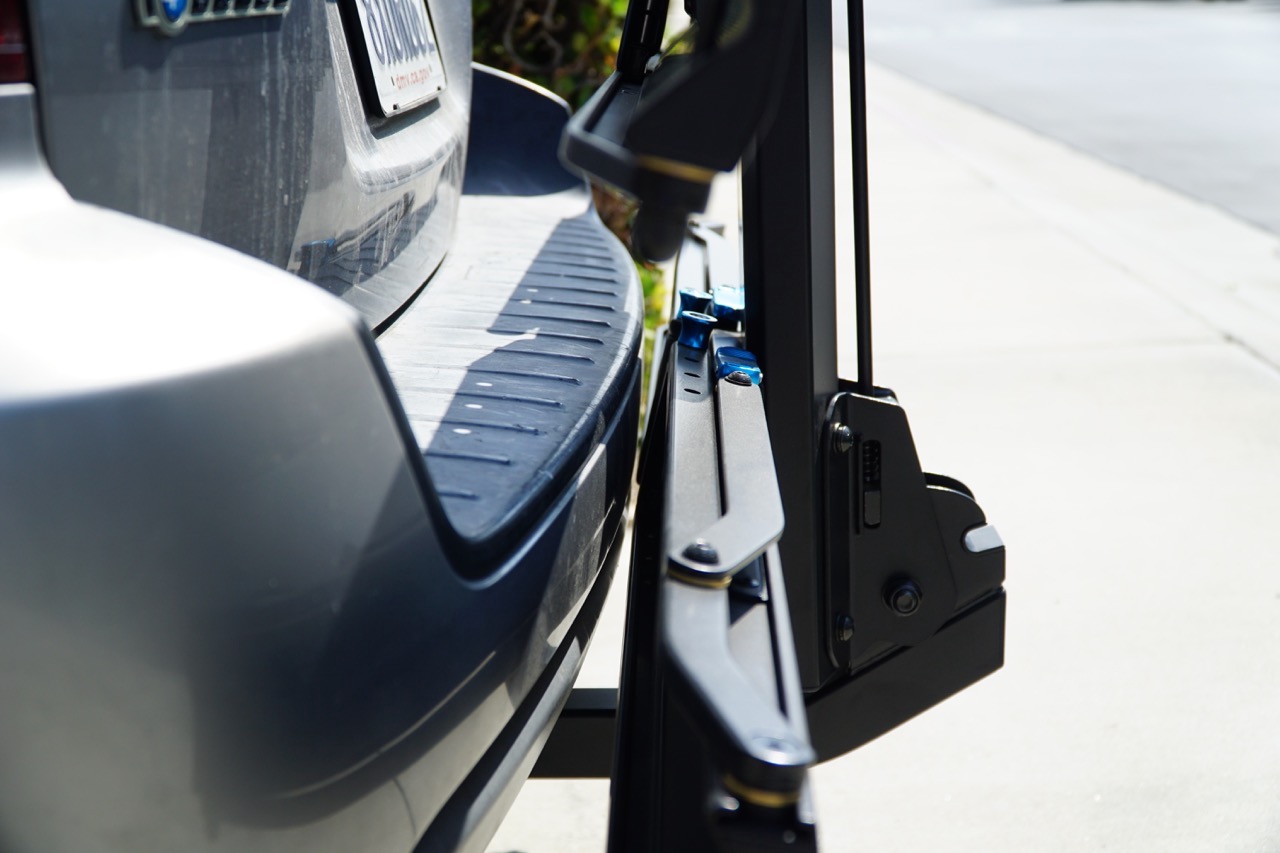 Still tight, but the GuideRail fits right out of the box…in the factory hole of the receiver.

The Rocky Mounts GuideRail is still a really close fit… but, I didn’t have to modify anything and the receiver lock is in the proper factory hole on the receiver. 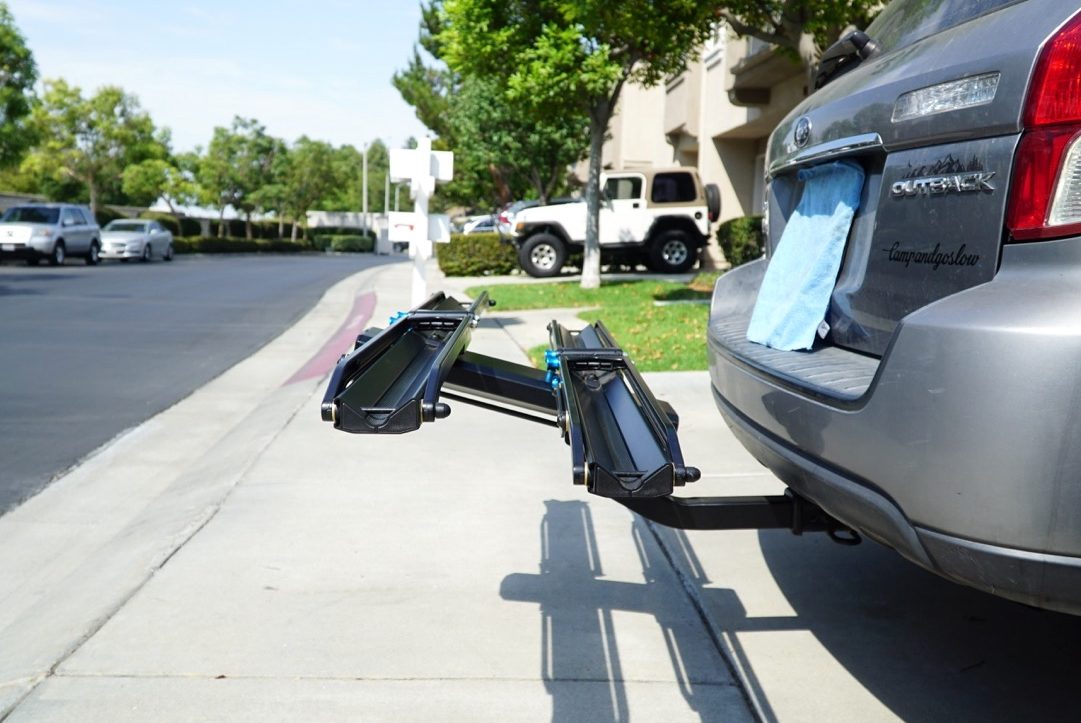 The GuideRail In the “carry” position from the side. 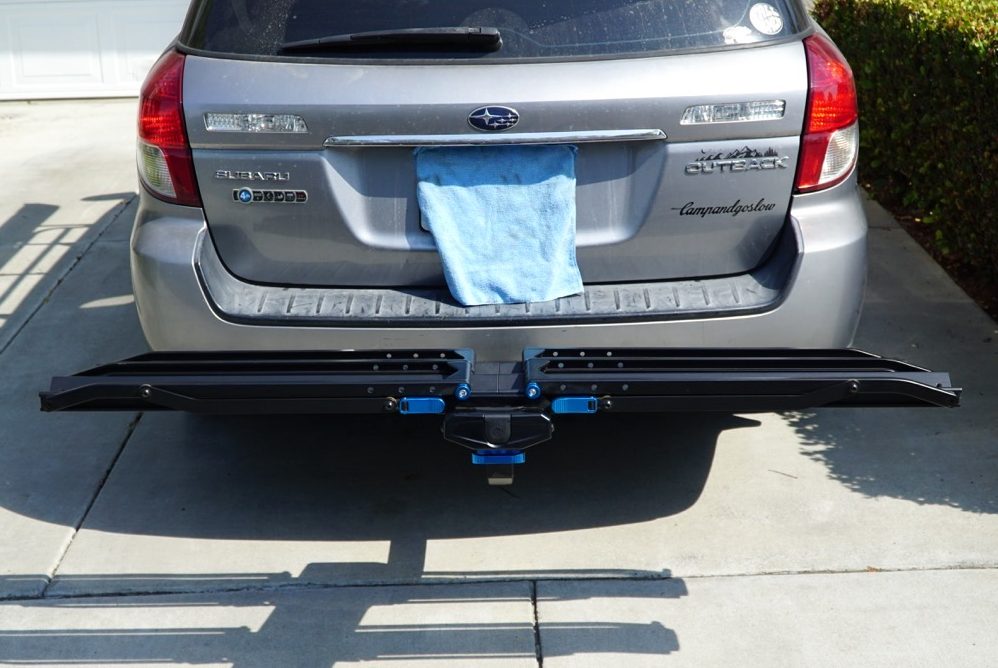 GuideRail in the “carry” position from the back

I’ll get into way more detail on the review, obvi, but still need some real time with the GuideRail. I will say that one of the glaring differences between the Rocky Mounts GuideRail and my 1Up Super Douty Double is the ratcheted load arm releases. 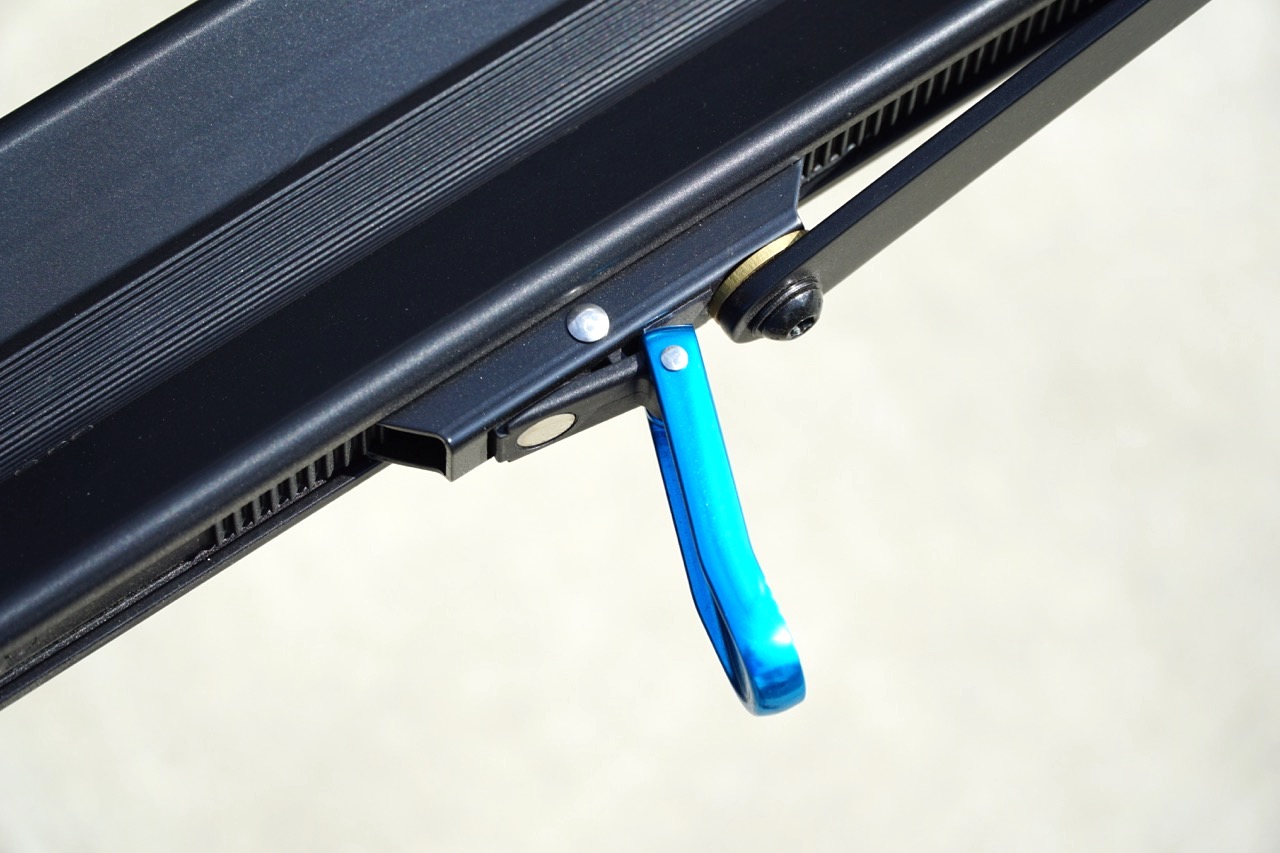 Being able to release and move the load arms up or down with one hand is, not to be dramatic, kind of a game changer and one thing that you can’t do with the 1Up rack.

You can see in the picture above that the release levers can be pulled out to a 90-degree position keeping the ratcheting mechanism disengaged allowing for free “up” or “down” movement of the load arms.

When the release levers are closed they ratchet again. You can also easily just push in the levers to do fine adjustments to the load arms. When engaged the ratcheting feels positive and strong. 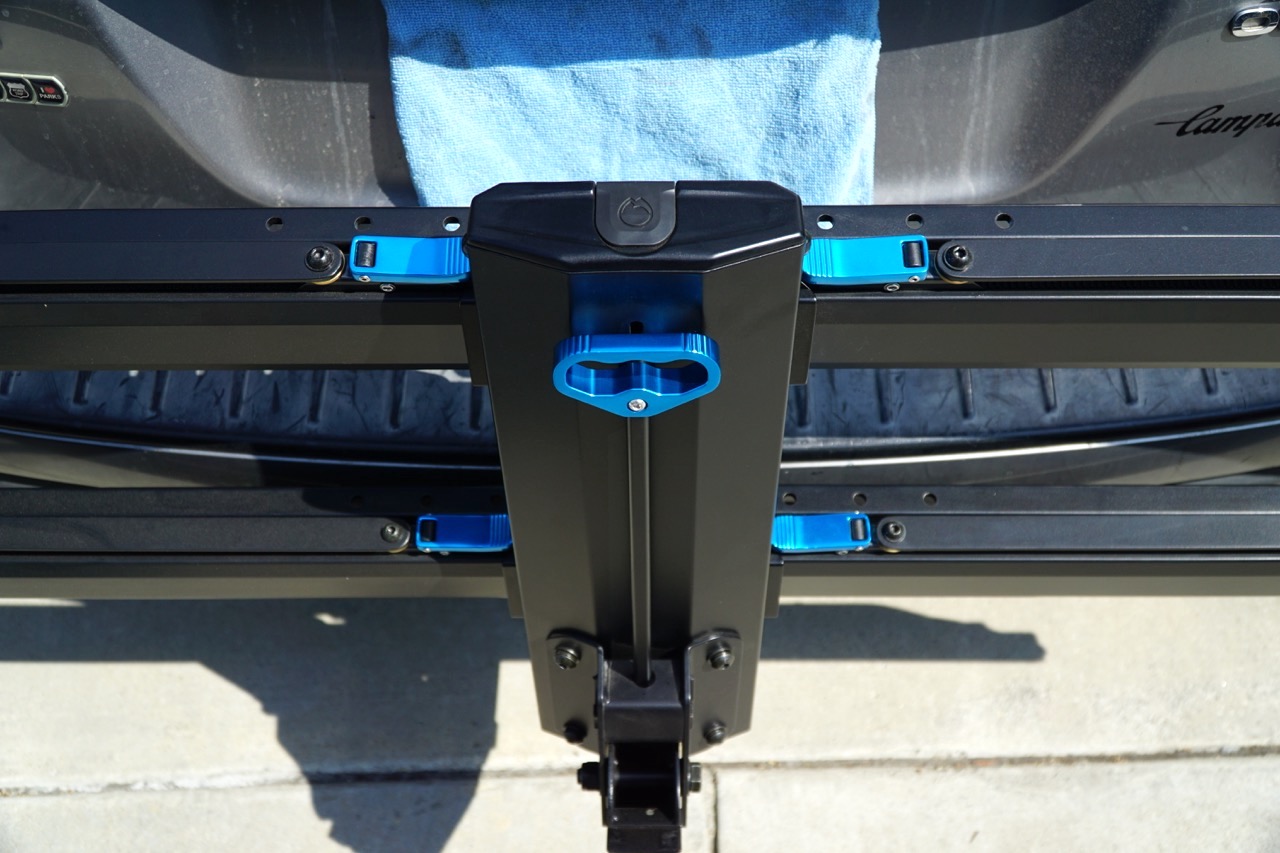 The last thing I will touch on is the GuideRails spine handle. The absolute ease of using the spine handle to raise into the “storage” position and lower the rack for access to the rear of the Outback or load the bikes is a real treat.

And honestly, a real welcome after dealing with 1Up’s mechanism… but we’ll touch on that and other big differences between the two racks that, upon first glance, look very, very similar.

Looks pretty nice. In the full review, I will be interested to learn where the plastic is on the RockyMounts rack. Also, where is it made? Thanks!

Why does it matter where it’s made?

Some people like to keep their money local. Some people also like supporting folks who support folks.

It matters to some people. Let it go

Thanks, @Astro_Kraken and @Jason Askelin for your replies. One additional comment in response to @Brandon Smith is that this rack is specifically being compared to the 1Up racks, which are made in the USA. If this RockyMounts rack is not American-made, then it isn’t quite as similar to 1Up as it appears, and the potential purchase decision for some people (myself included) is easier.

Unfortunately “made in America” is no longer an indicator of quality the way it once was.

IMHO the 1UP rack is poorly engineered and excessively overweight, and it’s price tag reflects these inefficiencies.

Also, assuming the aluminum is extruded domestically, they are benefitting greatly from a huge protectionist tariff that is imposed on foreign aluminum extrusions.

But on the plus side you have a 50% chance of finding a bible verse leaflet within the packaging.

Regarding “poorly engineered and excessively overweight”–could be, I’ve never owned one. A 1Up rack is cheaper than this RockyMounts rack ($849), though, which, if manufactured overseas, benefits greatly from cheaper labor costs. I guess I would need to see them both in person to see if either warrants the price tag. In the meantime, my American-made Thule tray rack, while lacking some of the niceties of the 1Up and this RockyMounts rack, is still serving me quite well and was about 1/3 the cost of either of these when I bought it in 2009.

Most likely the same place the majority of bicycles and parts are made…most consumer goods at that.

No mention if the carry position can be lowered even more to clear tailgates on trucks and hatchbacks on SUVs. Important feature for access when loaded with bikes. Also, what about an extension for addt’l 2 bikes, I also need that.

Mike Pupach
Reply to  A H

Yes it can be lowered to access the trunk area

Mike Pupach
Reply to  A H

Hi AH, thanks for reading. This is not the actual review of the rack, just some first thoughts. I will be covering all of the details of the GuideRail in the actual review. But, yes… it does lower all the way down with or without the bikes loaded for additional access. The 2″ version is expandable to carry 3 bikes up to 45 lbs per tray.

You’ll have to wait for the rest when I publish the actual review. 🙂

You may not be aware but you could have gotten an extension tube that would have solved the issue of the rack hitting your bumper. No modifying to rack neeeded!

Using an extension tube would reduce your tongue weight by 50%. Becomes an issue when using heavy ebikes.