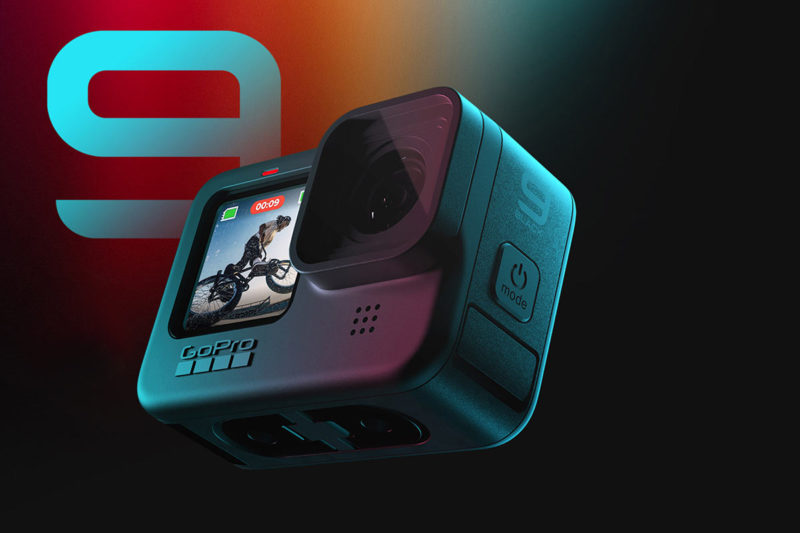 After a brief tease, the new GoPro HERO9 is official, and it brings two of the most requested upgrades – front screen, and replaceable lenses! But there’s a whole lot more, both in physical features and technical capabilities.

The new GoPro HERO9 introduces HyperSmooth 3.0, TimeWarp 3.0, 8x stabilized slow-motion, and new features like Hindsight that ensure you get the shot, even when you miss the shot.

Because when the prior model offers industry-leading 4K oversampling to create insanely good stabilization, where do you go from there? Add more of everything, of course…

One of the biggest asks from users was the ability to replace the lens. Until now, a scratch on the lens meant you needed a new camera. Now, the camera has a removable lens, and an optional Max Lens Mod that gives the camera superpowers (more on that below). The stock lens allows for GoPro’s “digital” lens options of Wide, Linear, and Narrow. 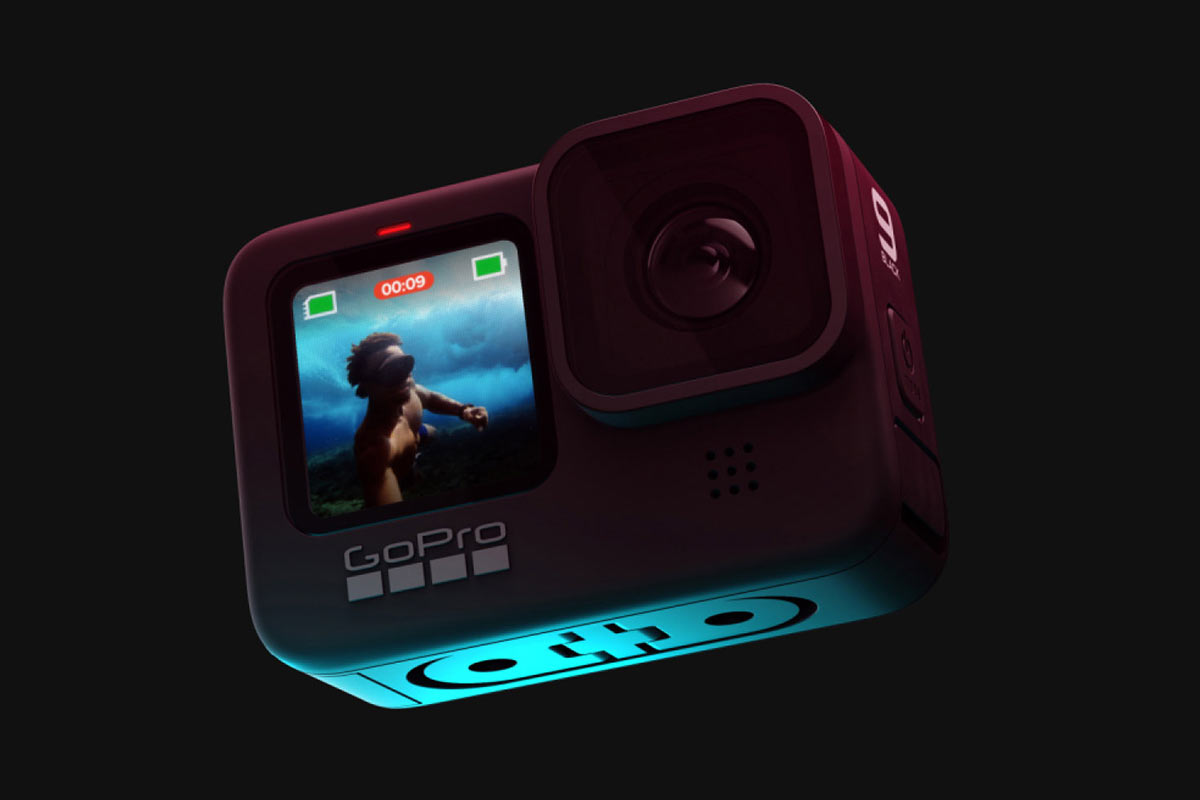 The other big request and improvement is a front facing, full color Live View screen. It still shows your settings and recording/battery stats, too, and has the recording indicator light just above it.

All these features and screens and resolution draw more power, so there’s a larger battery now. The HERO9 battery delivers 1720mAh (500mAh more than HERO8 batteries) to give it a claimed 30% more battery life than HERO8. Fortunately, they’re still just $20 each, same price as before. 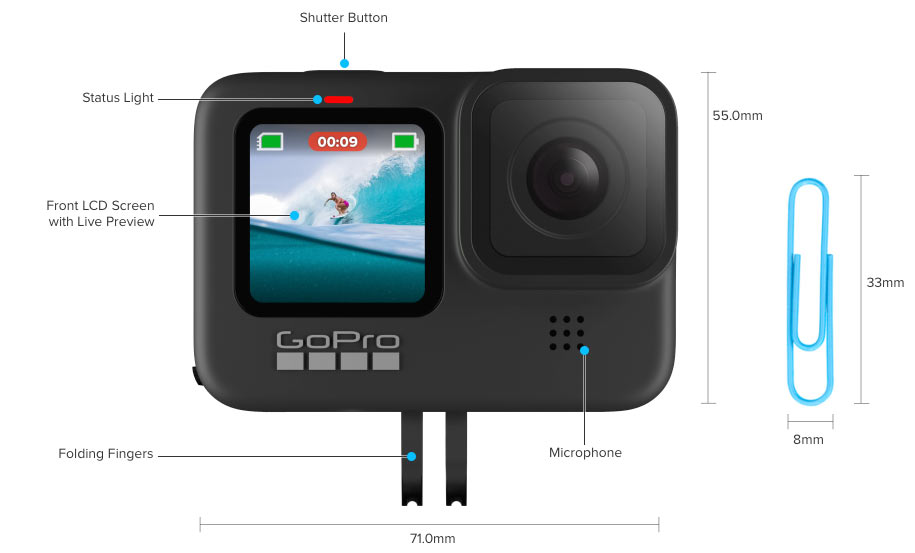 Visually, the biggest front update is the new full-color LCD screen. It lets you see what the camera sees, making it hugely useful for vlogging and selfies. The camera is slightly larger than the HERO8, measuring 4.7mm wider, 6.4mm taller, and 5.2mm thicker.

The new camera keeps the same two microphone positions, front and left side, to capture better sound and filter out wind noise, but has a new trick for the side mic:

The left side mic is hidden behind a cover so that it drains water out better and faster.

The Mode/Power button sits above it, and the battery/SD card/USB-C port are all still behind the single door hatch on the right. These are the same spots as on the HERO 8, so it should feel familiar. 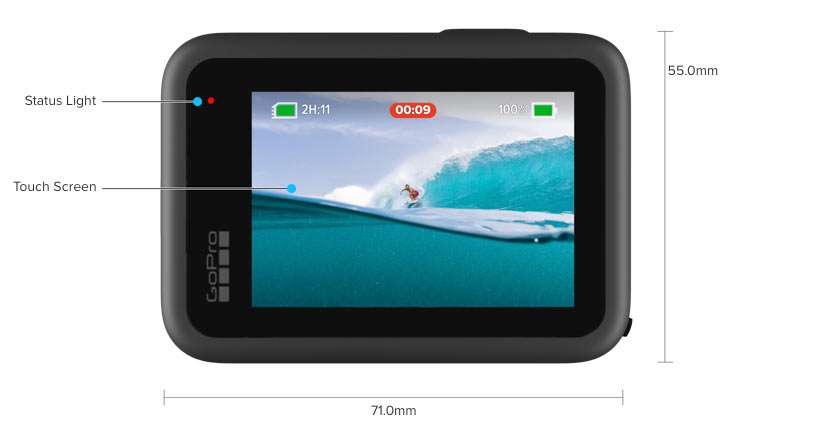 The larger dimensions allow for a slightly larger screen, which will be really appreciated when trying to review footage trailside. It’s still touchscreen, giving you quick control over settings and viewing. 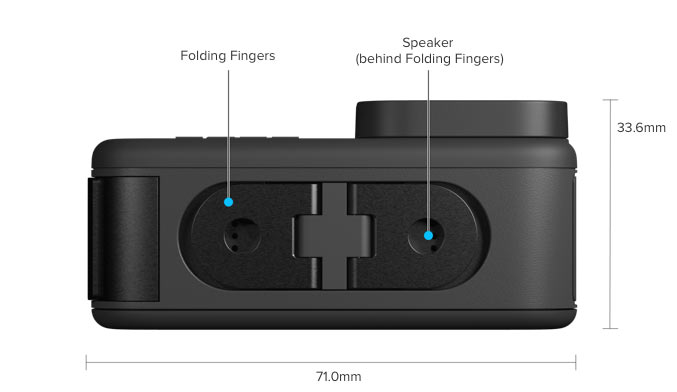 Thanks to the Folding Fingers mount design introduced on HERO8, the new dimensions mean all the old mounts will still work with the HERO9…just not the HERO8’s Media Mod cases. But…

…there’s a new HERO9 Media Mod case ($79.99) that combines a shotgun mic with removable windscreen and a 3.5mm microphone input. It uses the same cold shoe mounts, so you can add their Light Mod ($49.99).

They also have a new Max Lens Mod ($99.99), which does more than just switch the angles. It has a 155º field of view, the widest ever for a GoPro, and it supercharges the stabilization when installed.

It bumps things to Max HyperSmooth, making footage even more stable than the already upgraded HyperSmooth 3.0. And it’ll smooth you TimeWarp time lapse footage better, too.

It also lets the camera perform 360º Horizon Lock…so, if you’re into barrel rolls (intentional or otherwise), it’ll keep the footage level even while you’re spinning.

One caveat, using the Max Lens Mod drops the HERO9 Black’s waterproof rating to 5M, half the depth rating as without it.

Photos are upgraded to 20MP, with Superphoto + HDR to grab pics that are both wide and vibrant. But let’s be real, we’re getting this for the video, so here’s the complete frame rate and resolution chart for the new GoPro HERO9 action camera:

There are also looping video specs that are similar to the 4:3 options. While photo performance is upgraded to 20MP stills, it’s worth noting that when shooting in 5K, each frame is almost 15MP, so you can pull hi-resolution pics from video footage.

Hindsight lets the camera save the 30 seconds of footage Before you hit the record button, so you won’t ever miss that sweet segment just because you couldn’t find the button quick enough. 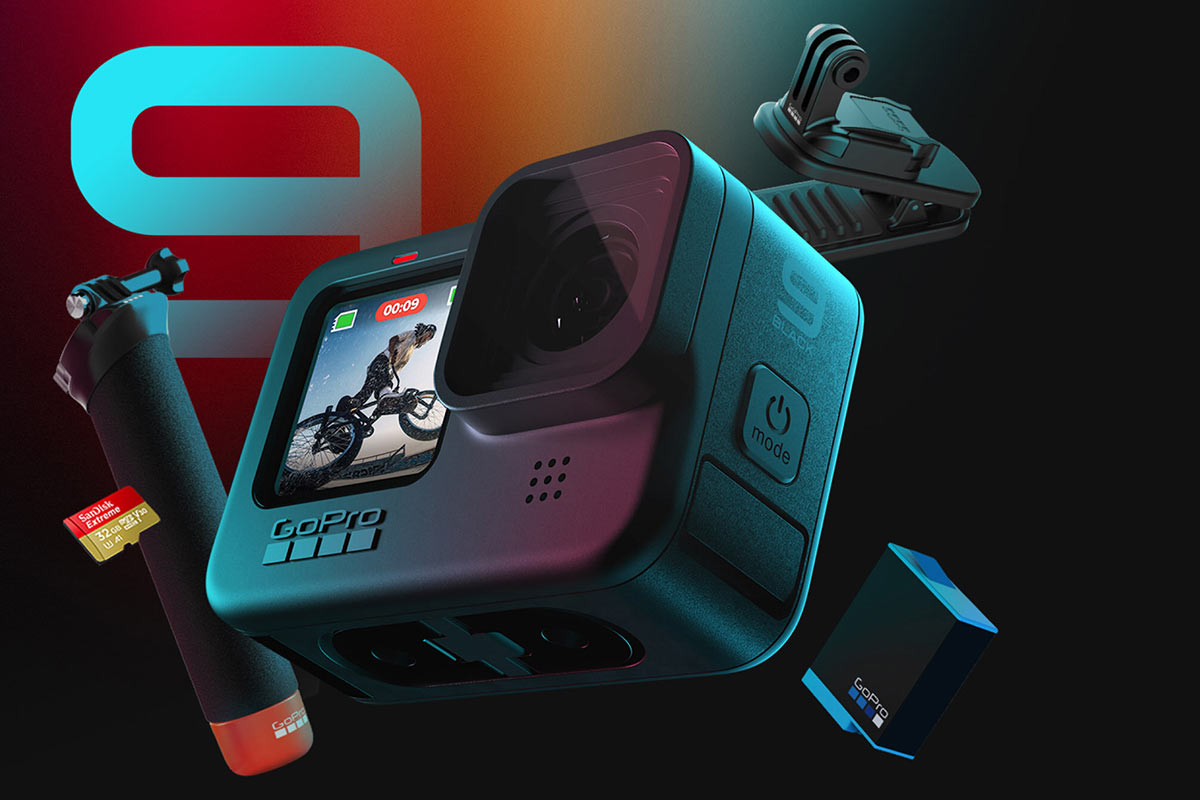 Technically, the new GoPro HERO9 Black retails for $449, a $50 bump over the HERO8’s original price. But, they’re pushing their GoPro Plus membership, giving you a full year subscription, the camera, and a 32GB MicroSD card for $349.98.

Or, get the Bundle shown above with hand grip, hat clip mount, and a spare battery, for $399.98. The same bundle is $499.98 if you opt to get it without the Plus subscription. Similar “Subscribe to GoPro Bundle” deals are being offered for the Max and HERO8 Black cameras, too.

can you get a clean hdmi out without the media mod? Hero7 was yes, but 8 was no.