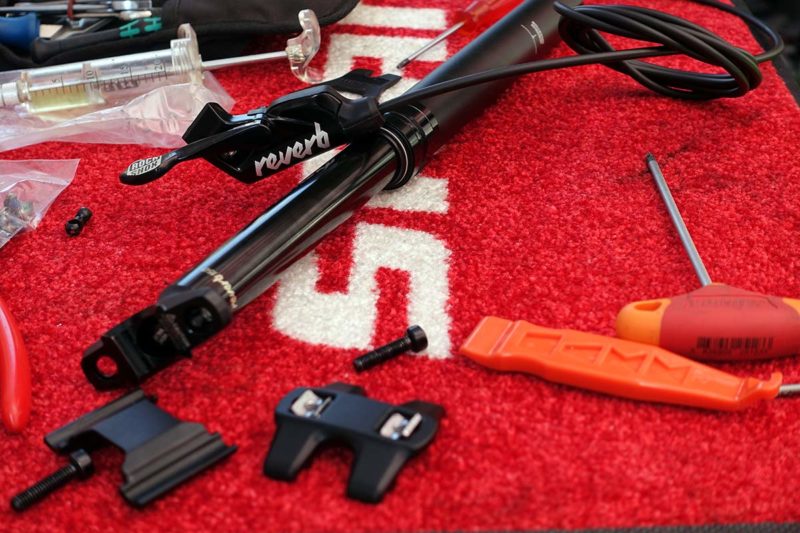 The new 2020 Rockshox Reverb just landed, and it promises smoother action, better durability, easier service, and longer travel for a given length. So how did they pack all that into a new post? Does it really live up to the hype? In this video and post, we show you all the differences between the prior generation Reverb B1, and the new MY2020 Reverb, which gets the internal designation of C1. But you can just call it the “New Reverb”.

This video shows off the internals, how it works, and provides a visual comparison between two 150mm travel posts, and how a new 175mm post compares to a prior gen 150mm version…you’ll be surprised at just how similar in total height they are, which is one of the biggest improvements to the system: Shorter riders on smaller bikes can now (probably) run longer travel dropper seat posts.

Drop effort reduction is one of their big claims. To accomplish that, they reduced the main piston diameter. The effect is a decrease in pressure and force required to move it, partly thanks to less surface tension that would come form using more oil. The oil itself is new, from Maxima, and seals and materials are updated to reduce friction, too. All of which is very similar to the internals for the new Reverb AXS (check that post for a deeper dive on the air release valve service feature). 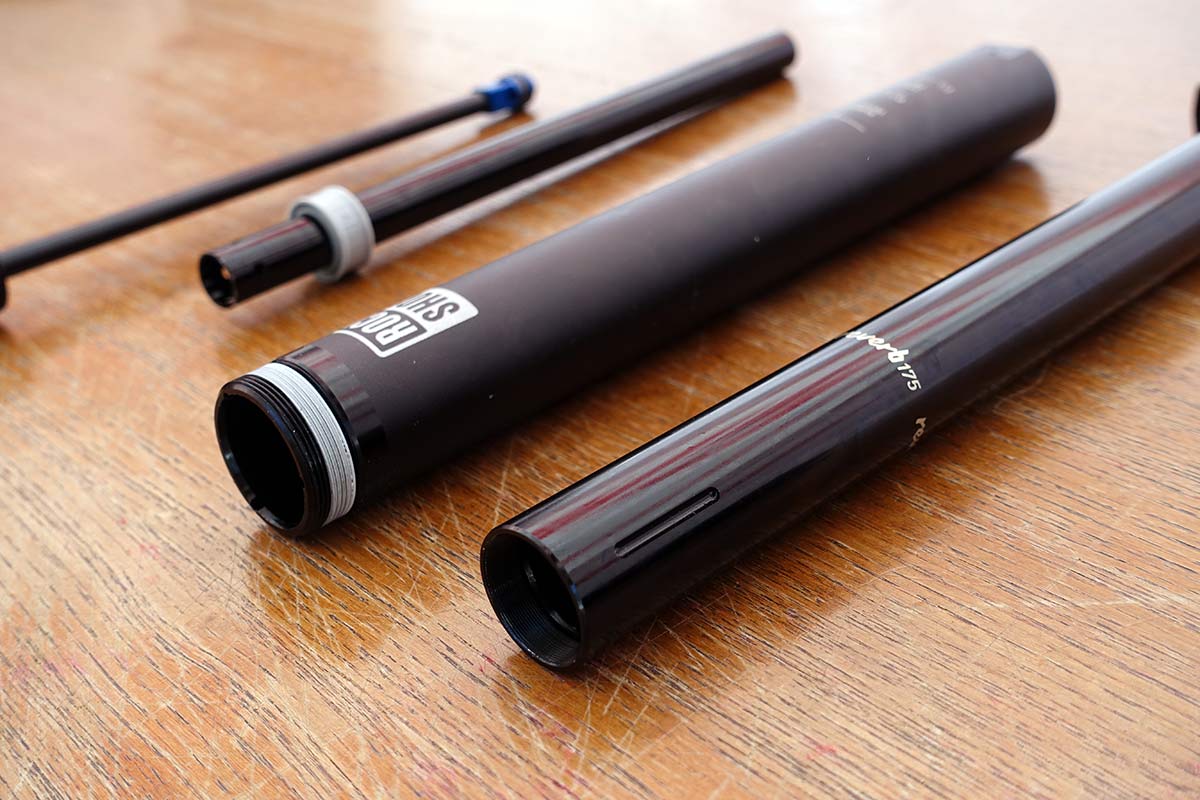 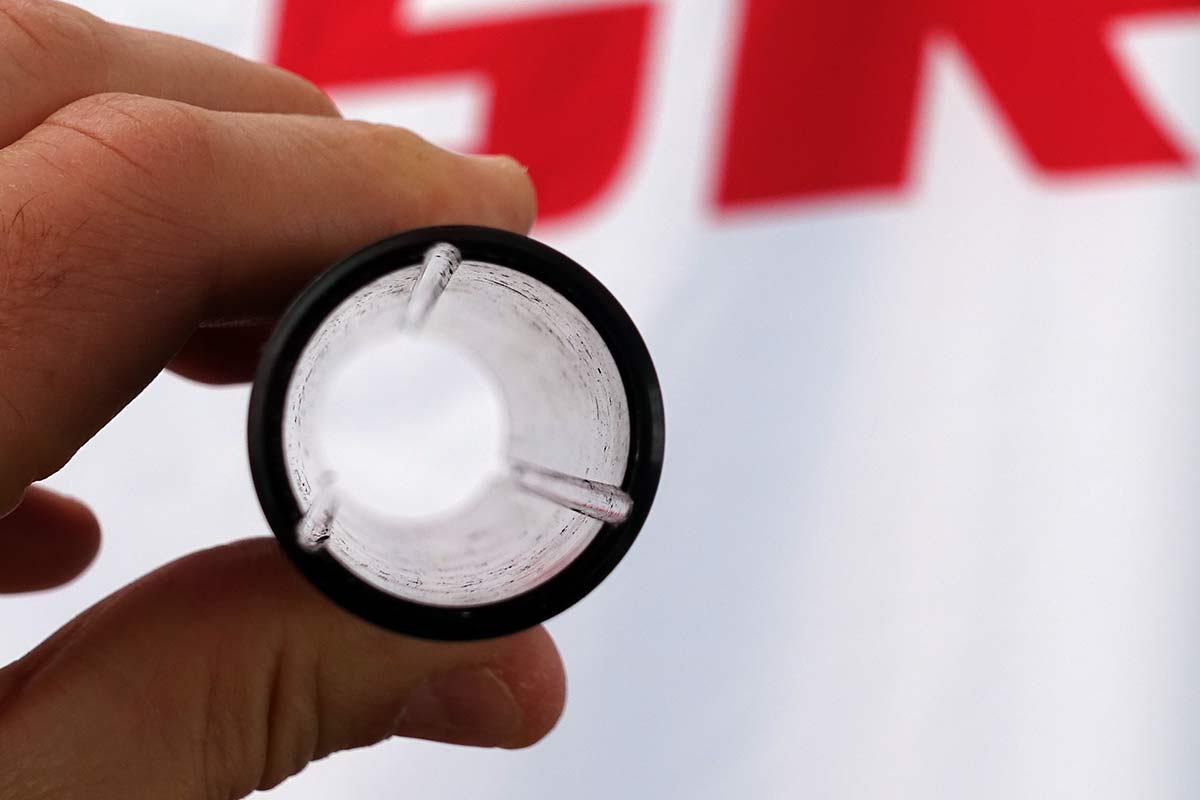 Not new, but still interesting if you’ve never seen it, is how they prevent the saddle from twisting. The stanchion has three short indexes, and the main tube has three full-length slots. A plastic brass “key” sits in each slot and keeps the stanchion sliding straight up and down instead of twisting. Those do eventually wear, which is why you develop more saddle twist over time.

How the Reverb got longer, yet shorter 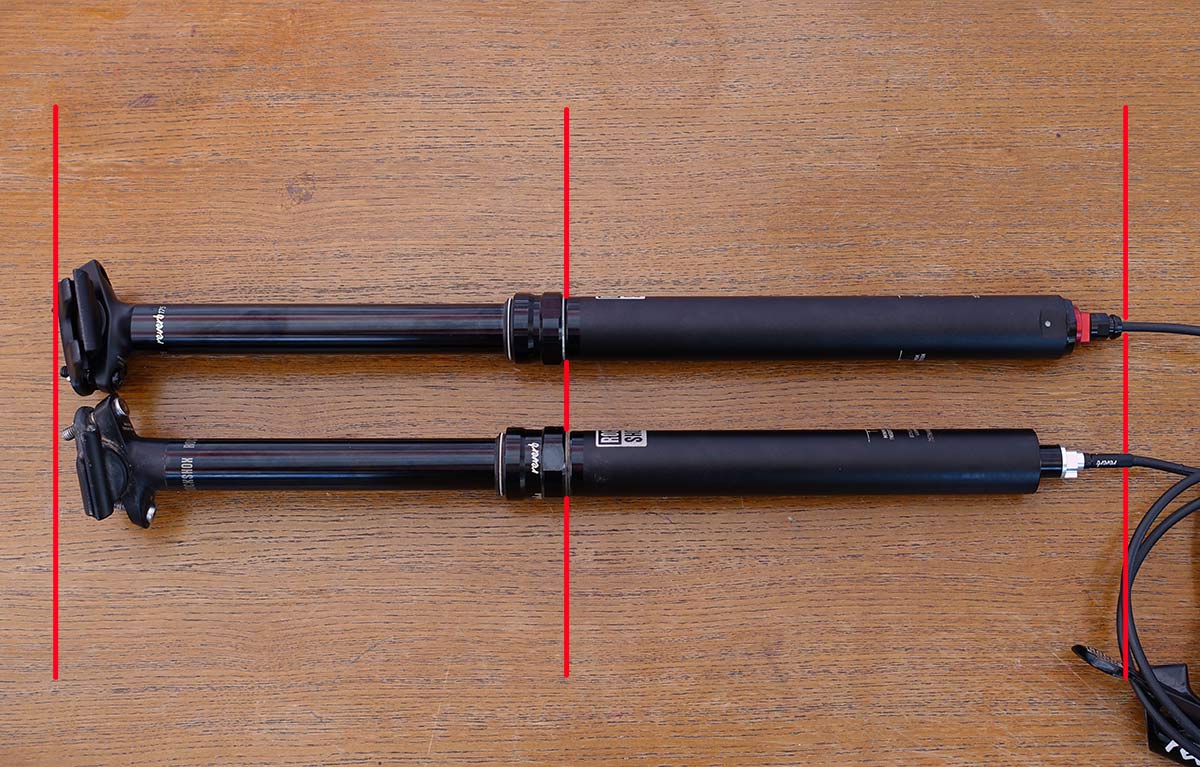 In the photo above, the new Reverb is on top in 175mm travel, and the older 150mm travel version is under it. Compare the total heights from tip to tip of the fixed, hard points, and there’s only about a half centimeter difference. Yet, you gain 2.5cm in travel. Here’s how they did it…

First, they reduced the collar height, which bought them a few millimeters. Then, they reduced the stack height of the hose connection on the bottom. This gave them about 15mm. While the photos above make it look like the new one is longer, keep in mind that the new one on the left is a 175mm dropper being compared to a 150m dropper. So, for the same insertion, you can get 25mm more travel. 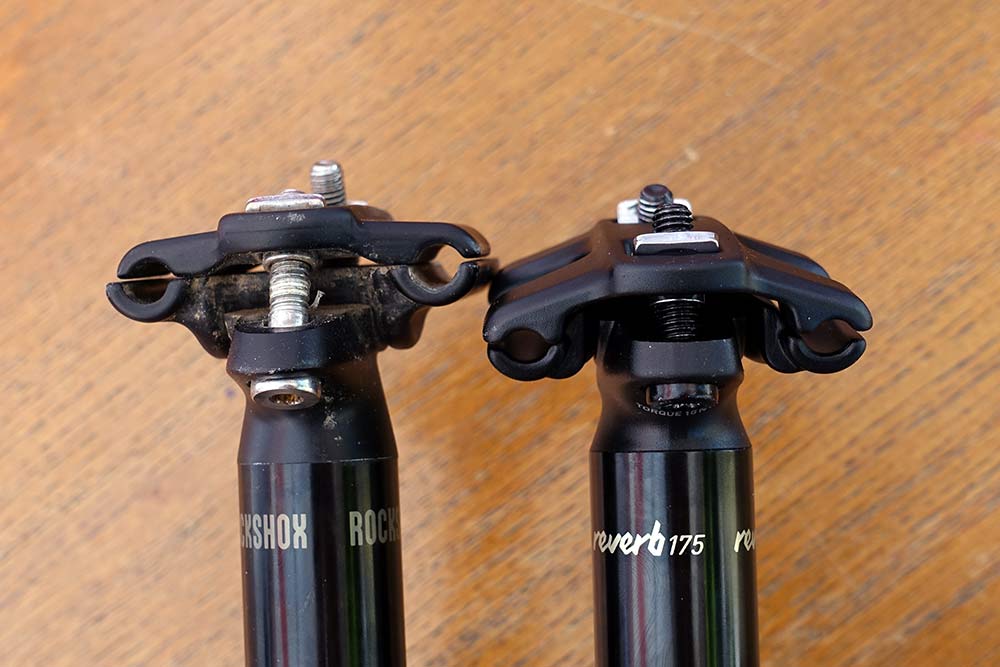 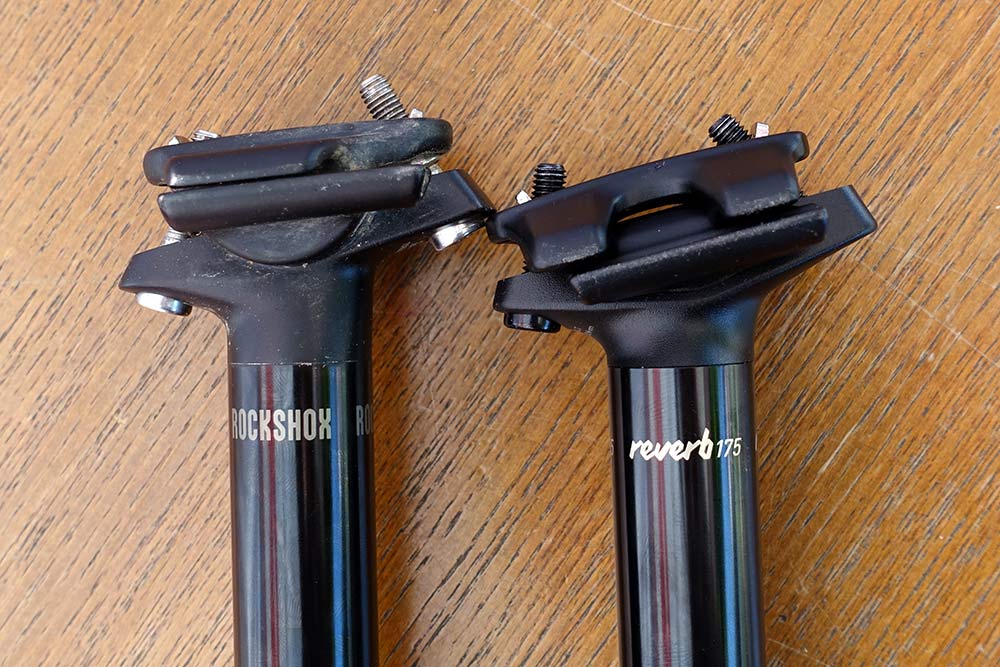 The final trick was to design new saddle rail cradles that drooped downward and decreased effective saddle height by about another 7mm. Add it all up and you end up with a post that’s only a few millimeters higher, but offers 25mm more travel.

How to tell the difference between Reverbs

Visually, it’s super easy to identify the new Reverb. Just look for the travel to be etched into the top of the stanchion. That, and the tilt markings are gone from the side of the seatpost cradle, probably because you wouldn’t be able to see them anyway with the new dropped cradle design.

Other tell-tale signs are the shorter collar at the top of the main tube, though without an older one next to it, you may not know that’s new. And of course, if you see anything that says 175mm travel, then it’s definitely new as that’s a new travel measurement for the Reverb, up from the prior 170mm option. And there’s a 200mm travel version above that. For all the options, pricing and other specs, check out our original launch coverage here. 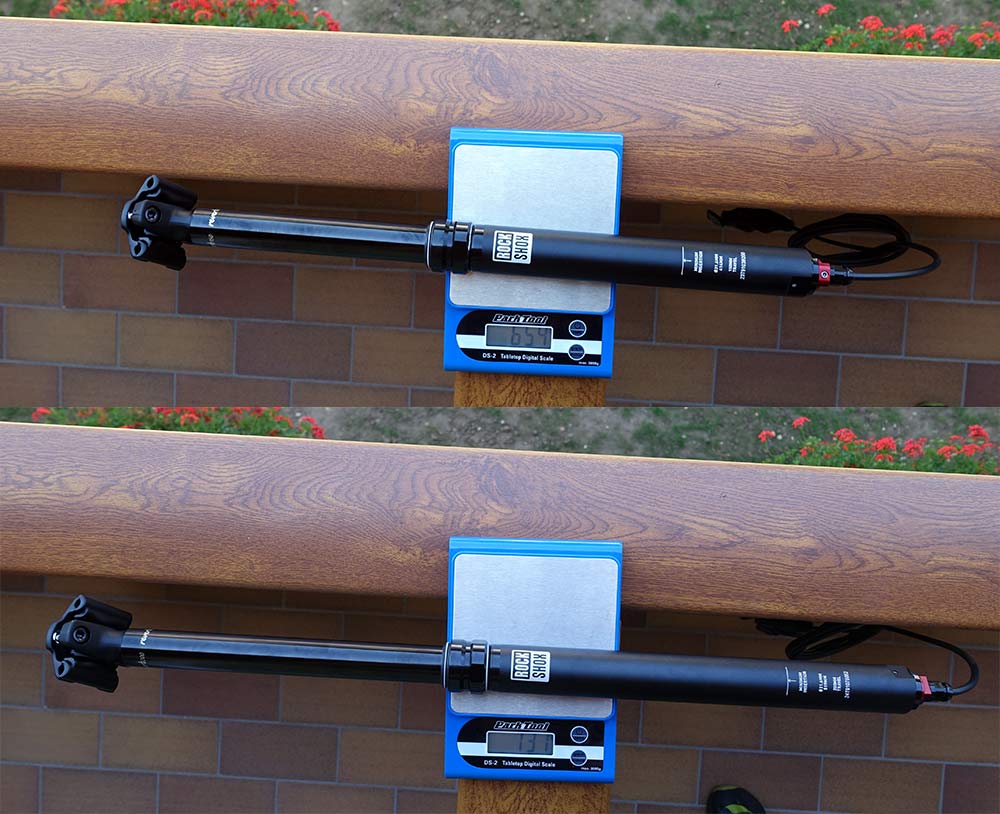 While SRAM offers the Reverb in five lengths (100, 125, 150, 175, 200 mm), we only had access (or is it AXS?) to the 150mm and 200mm to weigh. At top is the 150mm travel Reverb, which weighs in at 654g. The 200mm travel Reverb on the bottom came in at 731g. Both weights are will full length remote hose and the 1x thumb lever remote attached. Claimed weights, when published, may be lower since they don’t always include the remote. If you were to extrapolate and guess, that’s a 77g difference. Split that, and the 175mm travel Reverb should come in around 693g, and subtract about 39g per size to get 615g for 125mm and 577g for 100mm travel versions. These other numbers are only estimates. Check the original post on the new Reverb for more tech specs and info.

So they just took everything OneUp did (drop rails, short collar, minimal actuator height) and copied it. Excellent cloning, SRAM!

Plus, on many frames it’s not the actuator that limits insertion, it’s the main tube running into a bend or other intrusion in the seat tube. So not really same insertion for the extra travel.

Most excellent. Now then. A discount? Warranty approval? For all of us that bought a Reverb on the premise that it would work the way it was supposed to, then shelled out tons of loot to rebuild saggining or poor performing posts that didn’t do what Sram marketed/promised?

Pretty sure the keys are brass, not plastic, unless something has changed.

Greg, you are correct, sir! We asked and were told plastic, but double checked and confirmed it is still brass. Good catch!

there’s no reason to buy this over a bikeyoke. none. only three keys. 100g overweight. not much mention of that janky remote lever either.

Until it lowers on it’s own, let’s call it what it is, a “riser post”.

I have just serviced my failing Reverb’s IFP last month with the new blue IFP piston.
It was really a pain, much more difficult that you could imagine and very messy. You also have to buy some tools or it will be very difficult, but not impossible. Now the Reverb is harder to operate but it will keep its height. It has a lot of friction with this blue IFP (I did put SRAM butter as told in service instructions) and make a silly noise. Sure it “works”.

I don’t think this new piston will totally solve the friction problem and leak. Better materials will remove friction but smaller diameter could increase leakage.

If only I’d new, I would have NEVER bought a Reverb. Hope this could prevent other people from having these issues. There are tons of cheaper alternative and lighter. And working. Thanks SRAM.

In my humble opinion, using hidraulic lever for lock out or dropper posts it’s unnecesary and over engineered. They already made this mistake with top line forks. A cable lock out is an annoyance already, much more annoying hidraulic.

Most riders lack the mechanical knowledge and understanding of how to maintain and keep a mountain bike operating. If it moves on your bike it will need to be serviced. Most bikes I see on the trail have a drive train that’s never been cleaned or seen some type of lubricant. Riders don’t understand that forks have foam filters and need the oil changed after so many hours of usage just like dropper post. The Reverb has been in the game a long time until recently ever body and their brother now makes a dropper post that is the best on the market they swear.They all have their issues and will need to be repaired or serviced. The Reverb is easy to service and parts are readily available. I personally own six of them two of them are spares. The MTB game is not a cheap hobby if you cannot afford take up checkers. The Reverb is a great post you will find it hard to convince me other wise.