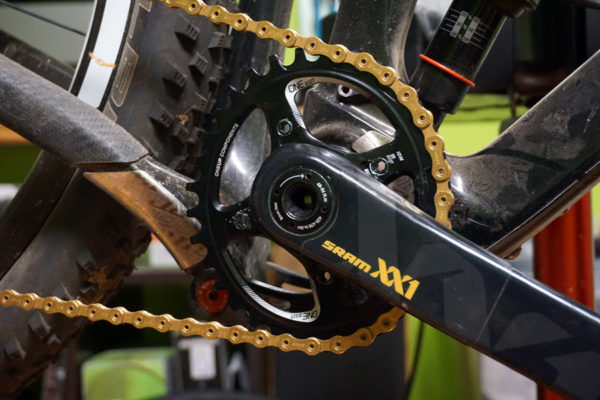 We covered the launch details of the new OneUp Components Switch chainring system as soon as it came out. But we’ve also had our hands on a set for a couple days, and it’s pretty slick. Here we’ll show the install notes and actual weights of a few variants, and next week provide first ride impressions.

I received spiders for SRAM, Race Face and Hope, along with three different size and shape chainrings. The short of it is this: It installs incredibly easy, and chainring swaps are exactly as fast and easy as they claim…

Even without practice, it was under 90 seconds to pull a chainring off and put it back on…and that’s because I wasn’t sure how many rotations of the allen wrench to make (about 2.5 full rotations works). My second attempt was quicker. It’s easy to see using a smaller gear on the way up the mountain then switching to something a little larger for the descents if you’re racing enduro and really want to pull out all the stops. And as an earlier commenter mentioned, this would indeed be perfect for cyclocross if they make a bigger version. 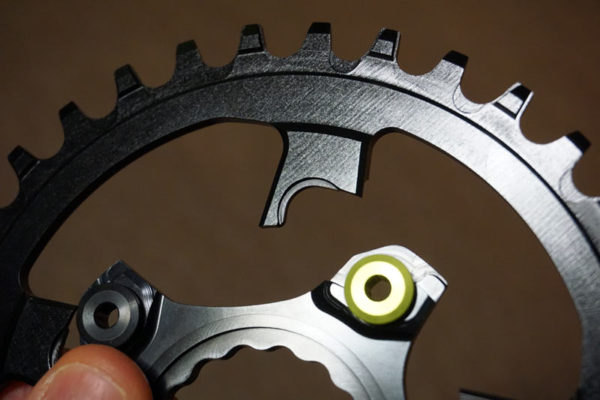 The chainring and carrier are machined to nest around the bolts, which are threaded in from the back of the carrier. 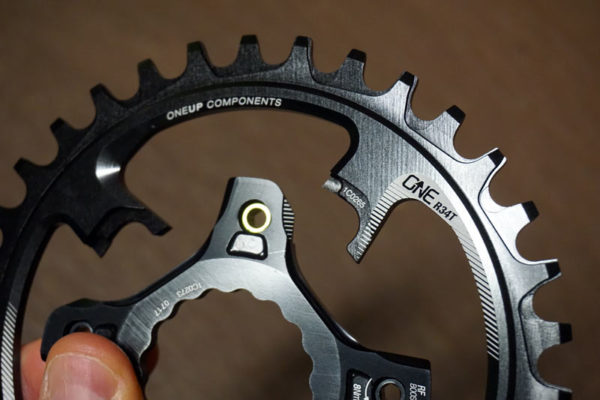 The bolts are hollow, so you can loosen them from the outside, but it means the rotation is reversed – righty loosey, lefty tighty. The chainrings are clearly marked with their tooth counts.

To install a chainring, simply loosen the bolt, position the ring so you can rotate it and slide it onto the carrier, then tighten the bolts. Reverse the process to remove it. Literally, a minute’s worth of work once you’ve done it a couple times. 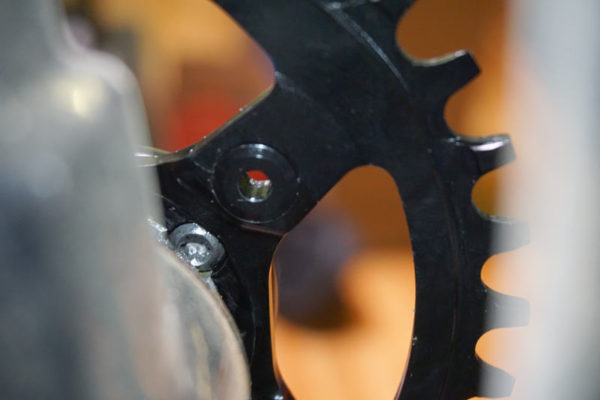 A view from the backside.

Carriers come in at 32g (Race Face Cinch, Boost), 35g (Hope, non-Boost) and 31g (SRAM, Boost). Yes, that’s with five bolts being weighed and, yes, you only need four, so subtract one gram for catching that. They come with four back bolts and one green one. Go stealth or fly the OneUp colors, your call.

Looks nice and all but Is it really that hard to take out four bolts? Say you save five minutes with this chainring, I usually am not in a hurry when I’m wrenching. I worry more that it’s going to break one of these days I get out of the saddle and stomp on the pedals.

It’s interesting for racer. Usually i’m using 28 on my 29er for my XX1, but let’s say a race track has a quite long straight which start after a gathering speed in a downhill part. I would need the 30. And usually there not that much time for a week end racer between checking the track and racing, so being able to swap quickly chainring is cool.

How is this any different than your XX1? Bolt retention?

I’m a professional mechanic, and I HATE chainring bolts. No, they’re not hard to use. But they’re annoying, and necessary to get right. I hate them enough that I’m usually excited to install a direct mount ring, or a chainring with threaded standoffs.

The exception would be for steel rings, like Wolftooth’s deal. There’s a fair amount of weight to be saved in a steel ring that isn’t direct mount. And this matters to me because I sort of figure that steel (or titanium?!) is the future of 1x chainrings……..hello?

Here we go, the “Boost” of 2018 will be this new invention called front derailleurs…

Yes, to a range of 4 teeth, 2 in either direction from ideal.

If your going to carry a second chainring on a ride and change at the top of the hill, why not just use a double? Am I missing something?

i
Reply to  Ivan

If you think a double is a viable solution for a mountain bike with 150+mm of travel, then yes, you are missing something.

elvis
Reply to  i

Front derailleurs limit how short your chainstays can be or how wide of a tire you can run. There are a lot of 1x only frames out right now and this would be an option for those frames.

Next they will be inventing a chainset with 2 chainrings with some kind automatic device to change rings while you ride!

OneUp now really needs to come up with a product called “Bait”.

^ The one after that should be “Switch.”

ELEVEN_g
Reply to  the biz

Isn’t it more of a case of the bike industry coming up with stuff, to come up with stuff, so they can keep on selling said stuff, even though they all know, and they do, that said stuff is, for the most part, pointless?

the biz
Reply to  ELEVEN_g

Is it just me who only changes their chainring when it wears out?

As a 1x CX racer, I would like something like this. A lot of the courses I’ve done I’ve been “ok” with my existing 38. However, if I had a 40t sitting around, I would have switched for a few courses.

I’ve just come back from a holiday in Spain, where we were shuttling some days and pedaling up others. This would have been good to have. I have, but didn’t take my different size chainrings with me because I flew. It would also mean taking all the needed tools for cinch DM. This is a good concept . I don’t why people complain about having options! (deleted)

So there are 4 bolts to “release” which is pretty much equal to SRAM direct mount (one for the crank, 3 for the direct mount ring). If I’m correct raceface cinch system is also very quick to swap.

Not sure I see the need for that only slightly faster, but unproven solution.

FWIW, Yes the Raceface one is quick to swap as long as you have a free hub tool (and preferably a sturdy vice) and a feel like taking the off the DS crank on the side of the trail. A lot of people will find no use for this; however, living where I do and considering some of the places I ride, I see this as legit, being able to make a 4 mile 4000 foot ascent with some spots being 18-20% with a 28 and then switching to a 32 for the ride down the hill or for use in other riding areas. I’m a fat and plus bike rider and change gearing to suit the place where I’ll be riding pretty often so being able to switch rings in a couple minutes without removing the crank or the pedal makes this worth a try for me. Additionally the fact that the chain rings are $40 instead of the $65 I normally spend isn’t really a bad deal either

For me it’s about saving money replacing rings as they wear out. I go through a few a year and the rings by themselves are fairly cheap vs buying a whole new direct mount ring.