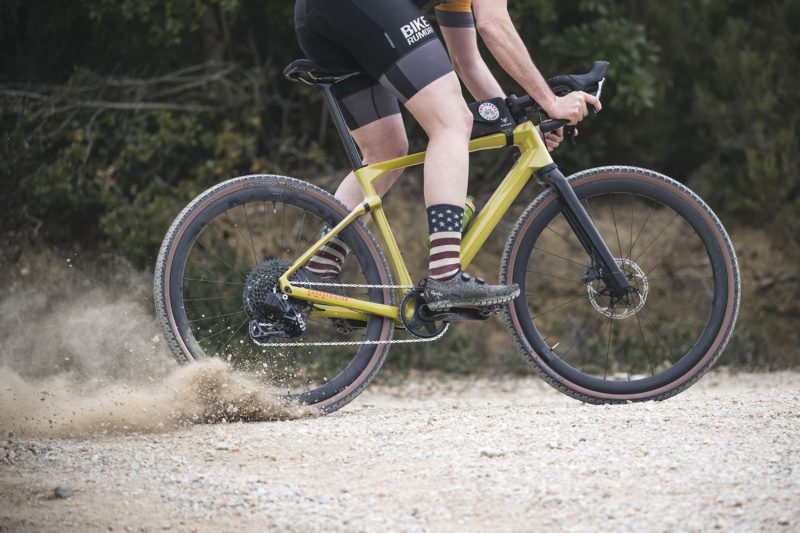 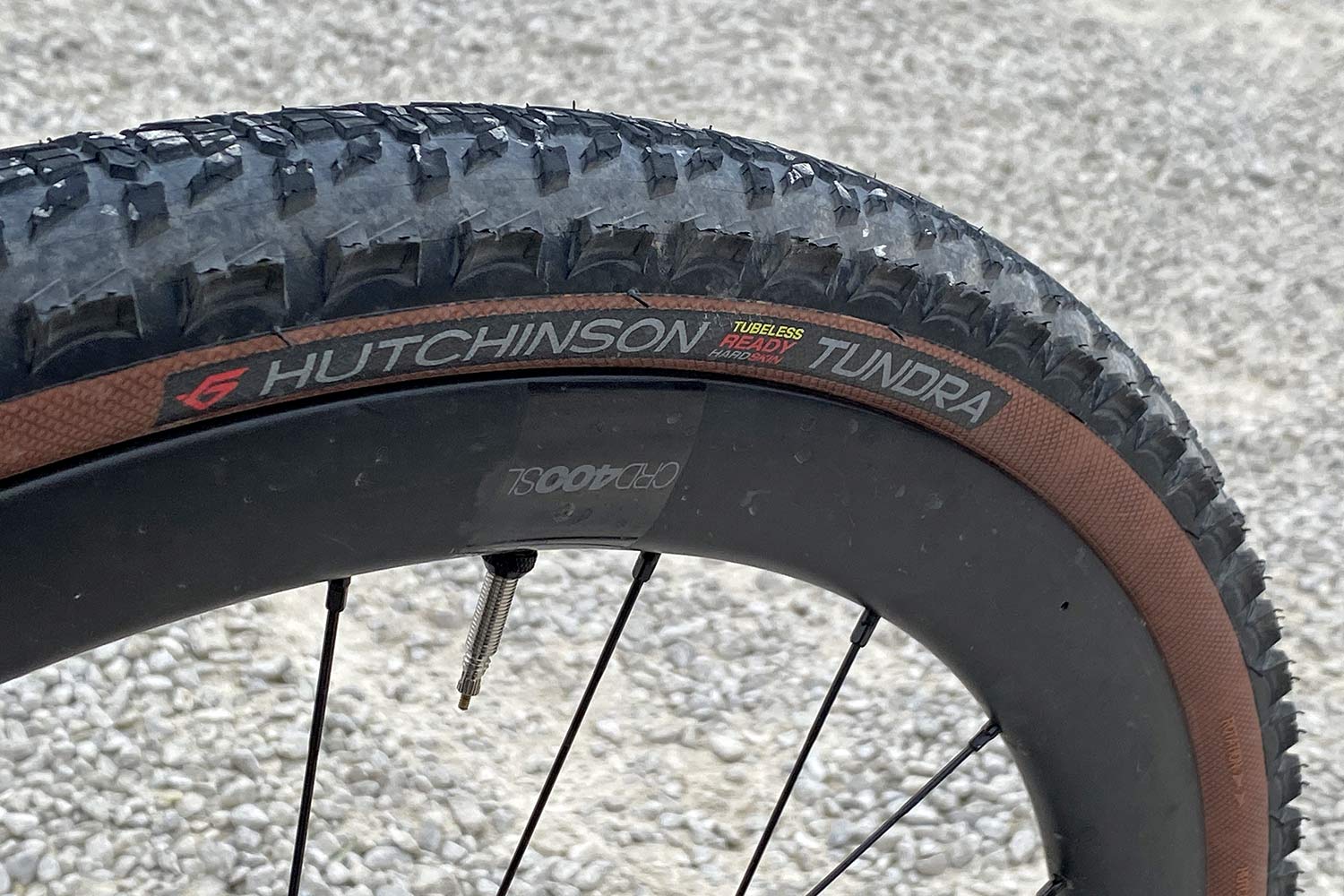 Hutchinson designed the new Tundra gravel tire to give dropbar adventure riders more grip in loose gravel, muddy tracks, and technical terrain that bleeds into trail riding. But at the same time, it maintains a fast-rolling center for speed and efficiency on hardpack & asphalt. 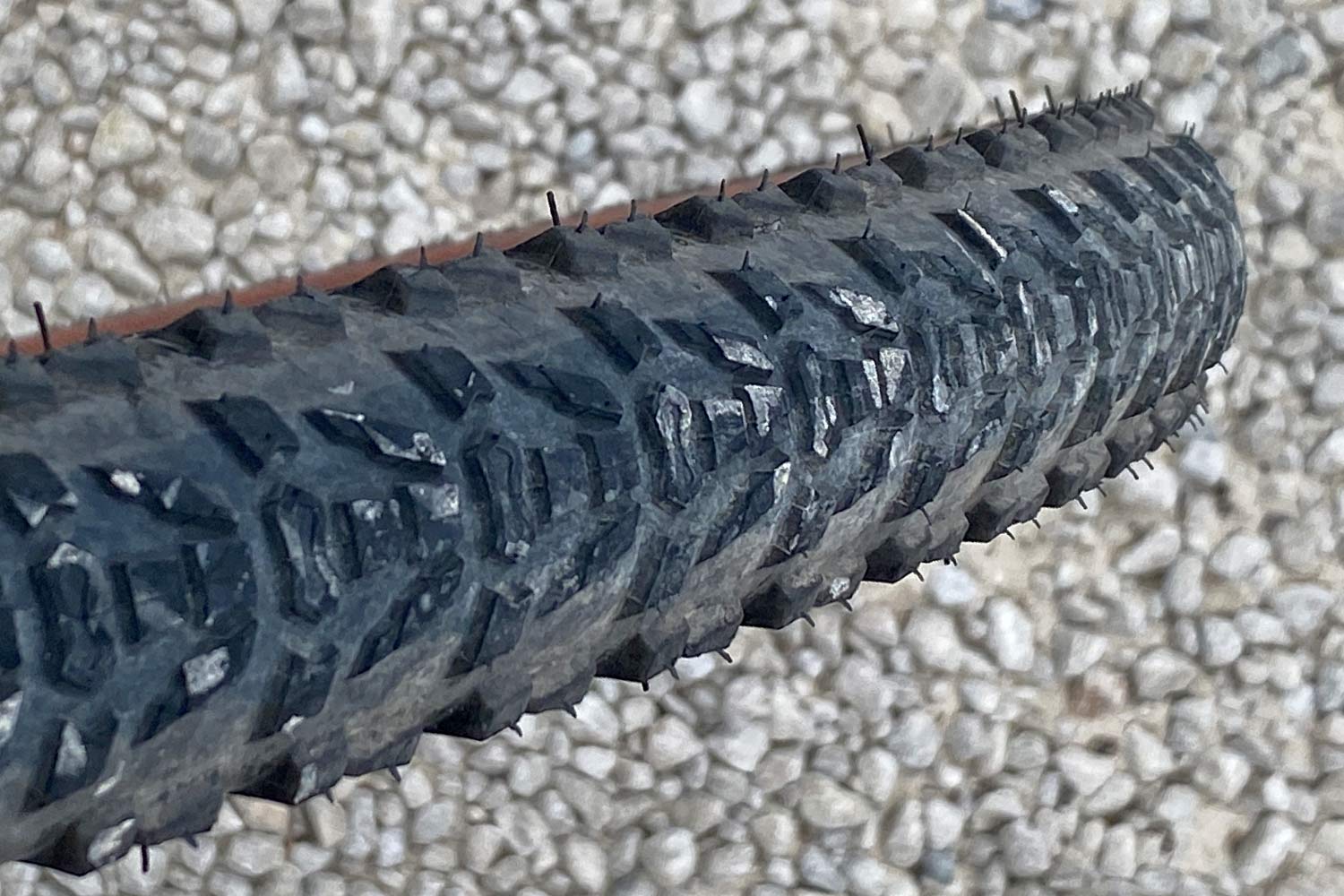 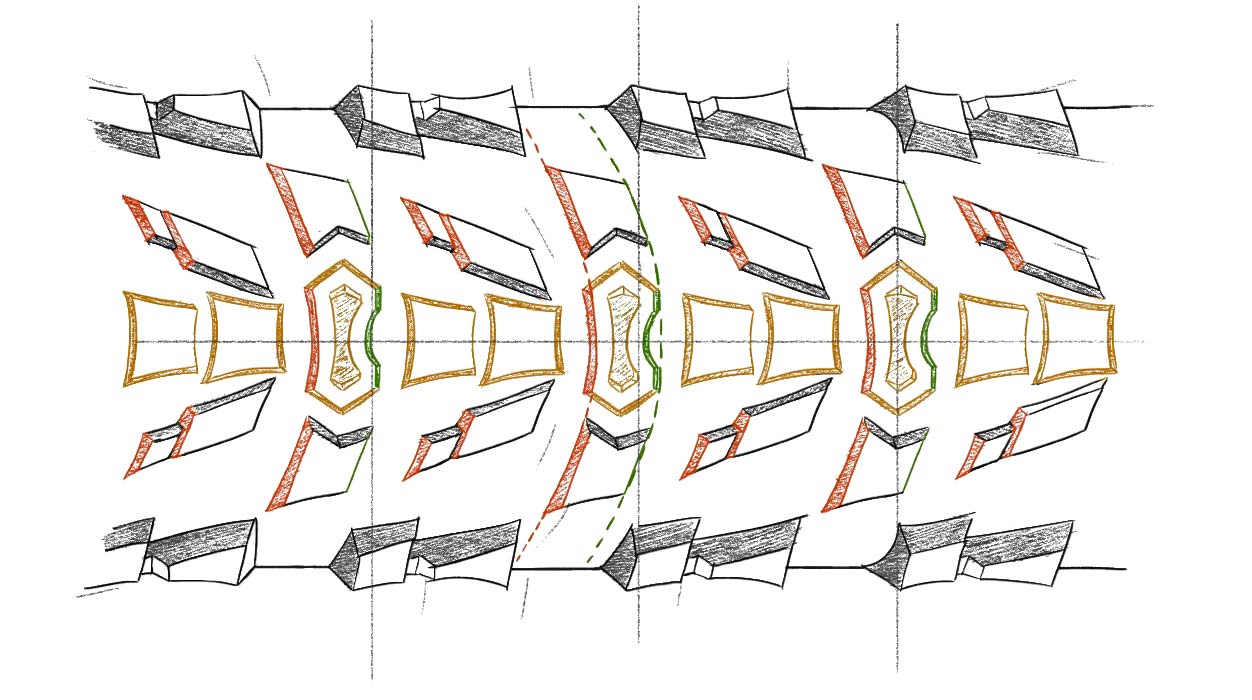 The Tundra gets a much more complex tread design than we are used to seeing in a gravel tire (more common on MTB tires) with Hutchinson detailing: the hollowed-out center knobs for extra braking grip, radial braking lines (red) & gripping lines that provide control at all lean angles, and cut out buttressed side knobs for mountain bike-level cornering grip without weight penalties. 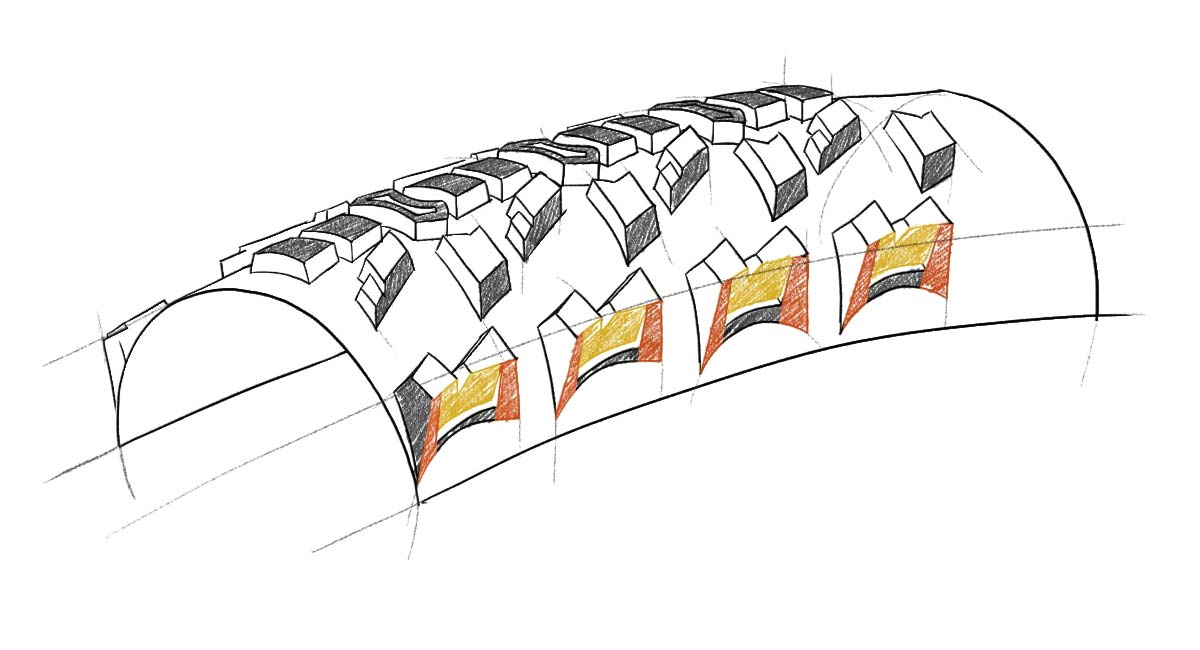 Like the Touareg, the Tundra is a dual-compound gravel tire with fast-rolling 60ShA rubber to support the entire tread, topped off by softer 50ShA rubber on the shoulder & transition knobs for increased cornering grip. The tires get bead-to-bead puncture protection just like the Touareg and Hutchinson’s XC MTB tires. The new Tundra is available in two colors, both that share the same 127tpi casing construction – the tan sidewall Hardskin which is a tiny bit more supple is made in France, while the slightly stiffer black tires with the ‘Reinforced+’ sidewalls. 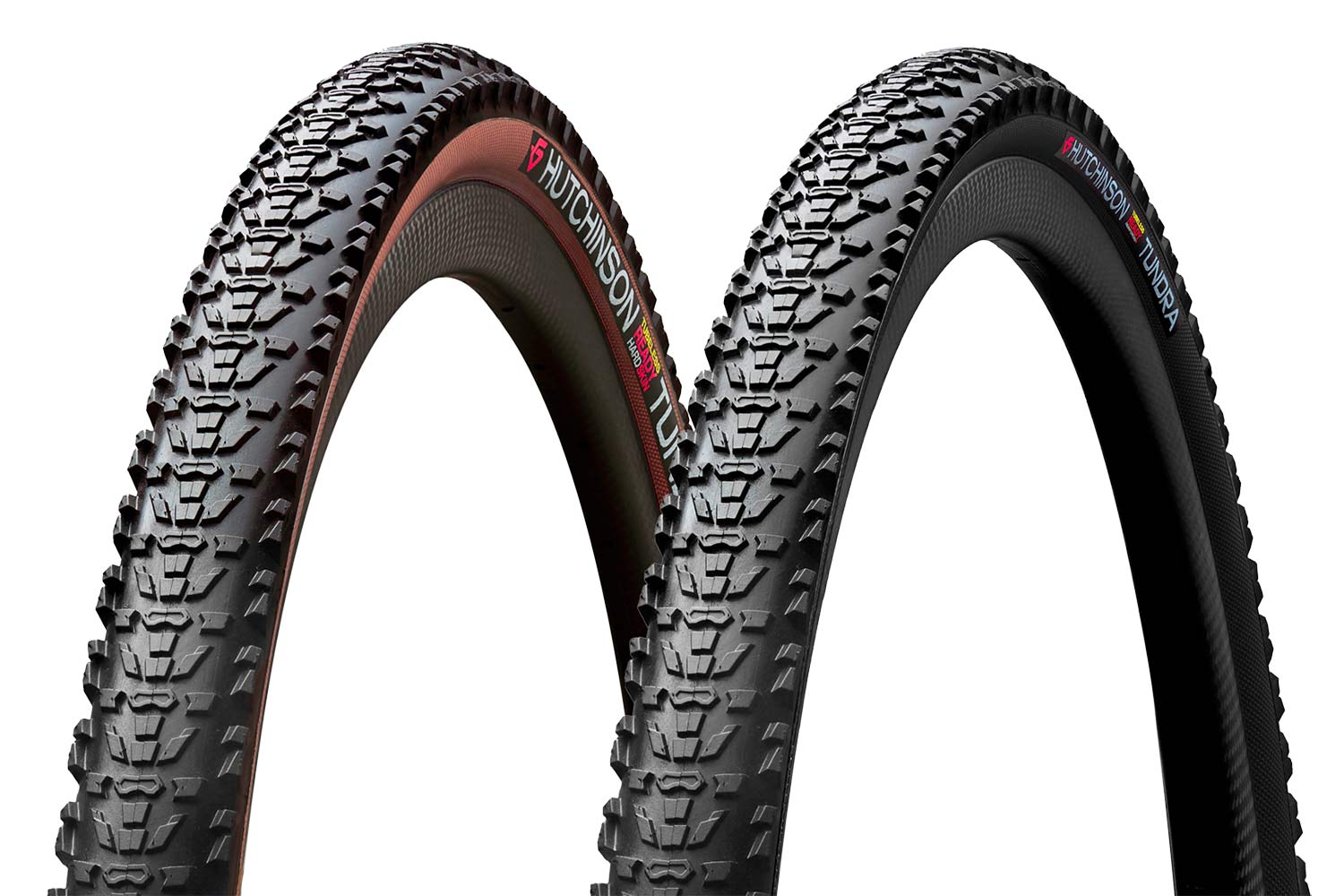 We don’t have official pricing or real in-store availability yet, but we expect they should sell for the same as the Touaregs, ranging from 37-60€ depending on sidewall spec. 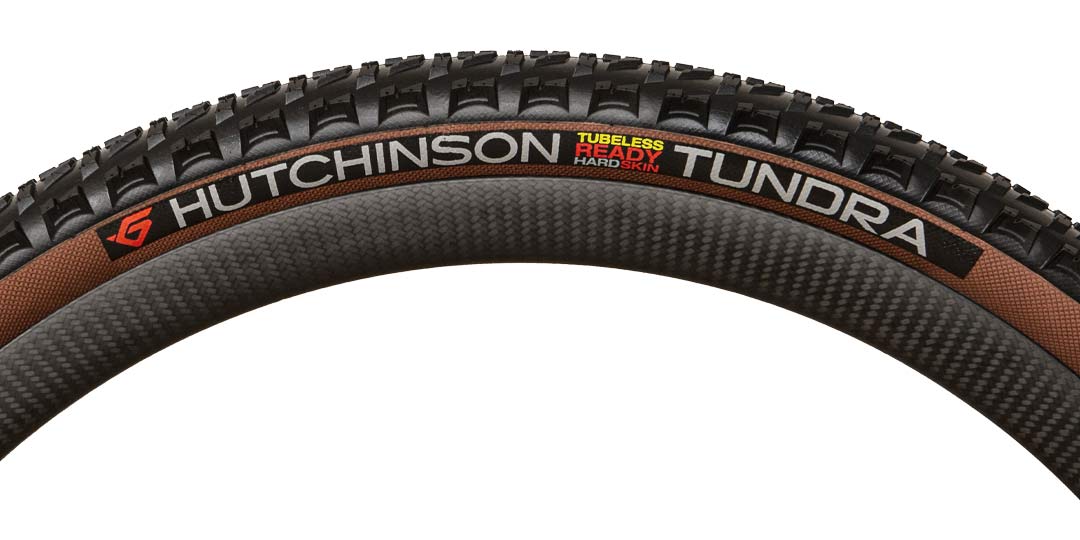 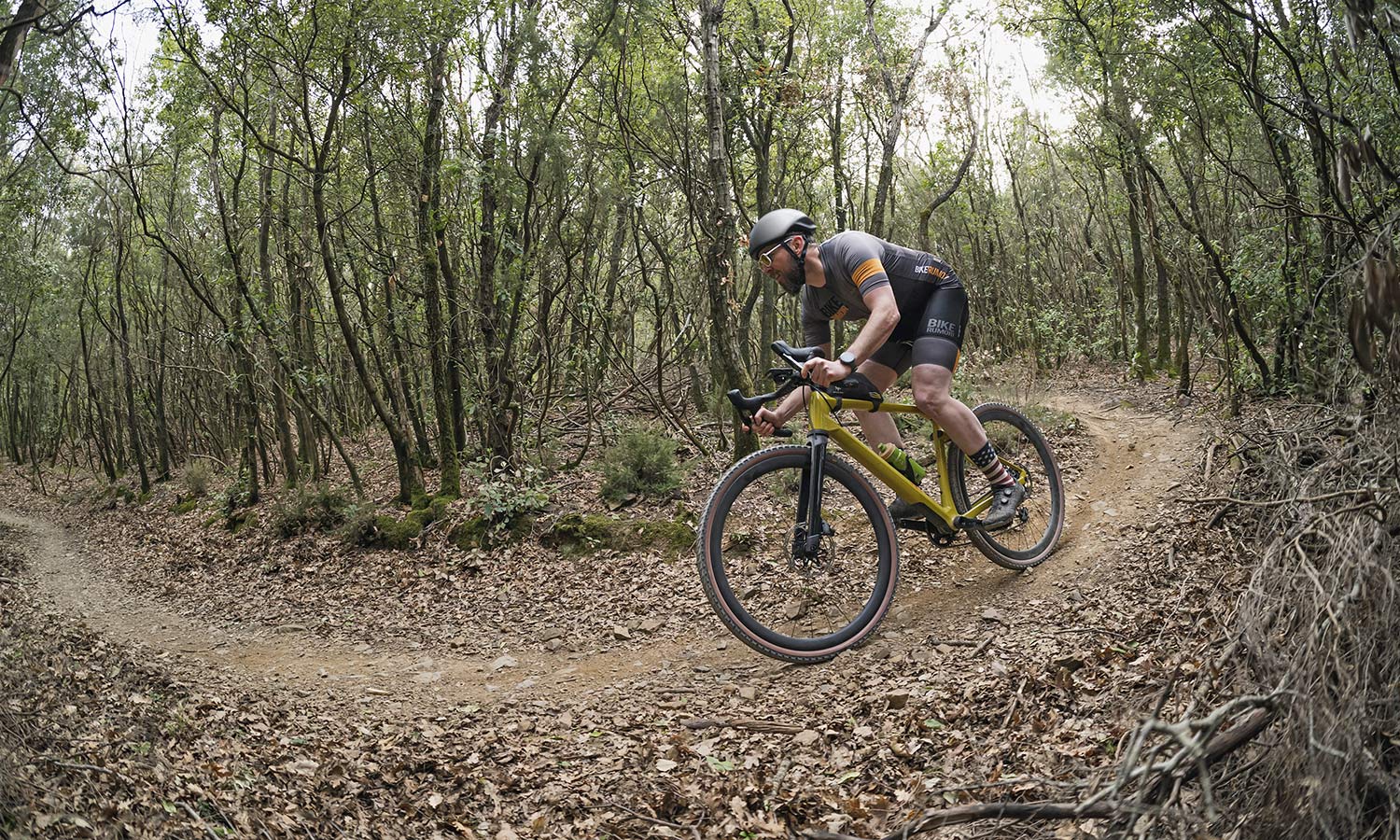 Hutchinson describes the new Tundra as something of a scaled-down mountain bike tire, inspired by their old fast-rolling Black Mamba XC (& CX) tread design. But in fact, I remember the Black Mamba not just for its continuous row of central tread blocks, but for super low-profile tread lugs, so much so that it felt more like a semi-slick. 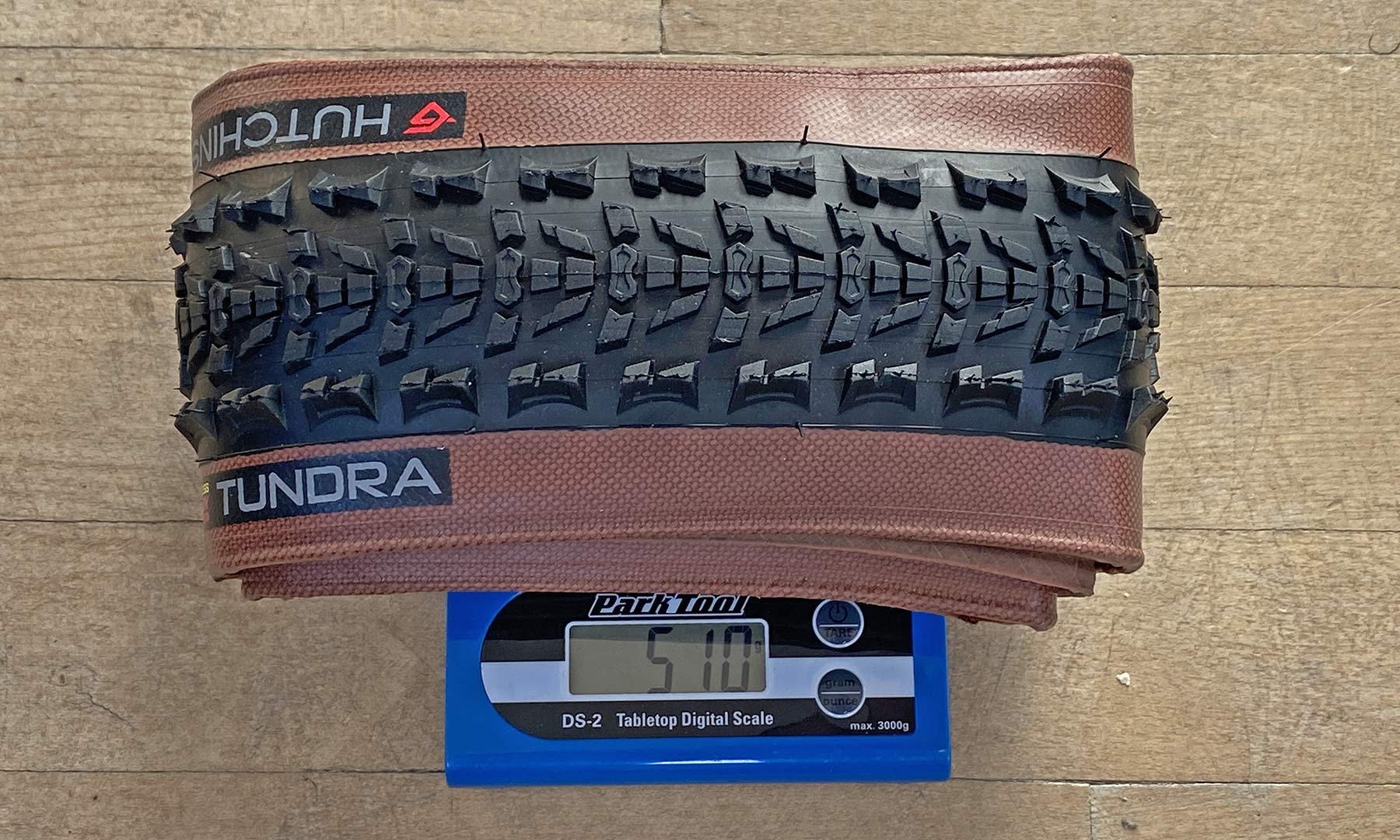 Instead, the new Tundra tread blocks are taller both in the center and on the shoulders, with extra space between the two to keep them from packing up with mud, and to dig deeper when cornering. So it’s maybe better described as a scaled-up XC race tire.

And our 40mm tires were just a bit heavier than claimed, at a still reasonable 510g a piece. 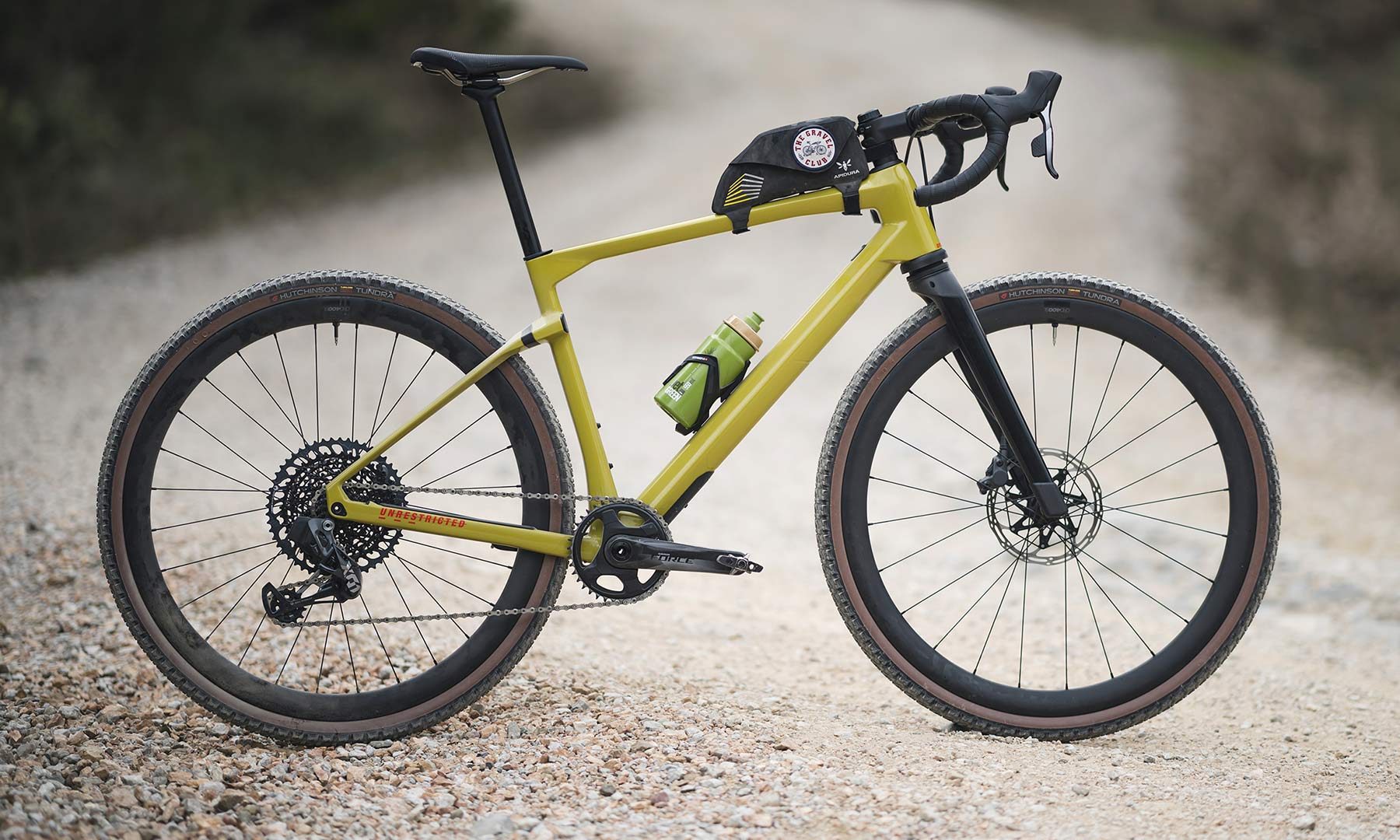 The result is a gravel tire that looks like a proper mountain bike tire, just in a narrower width. At first look, I didn’t really think I would like it that much. I typically prefer a lower-profile, fast-rolling gravel tire like the Touareg, and am happy to drift a bit in the turns. 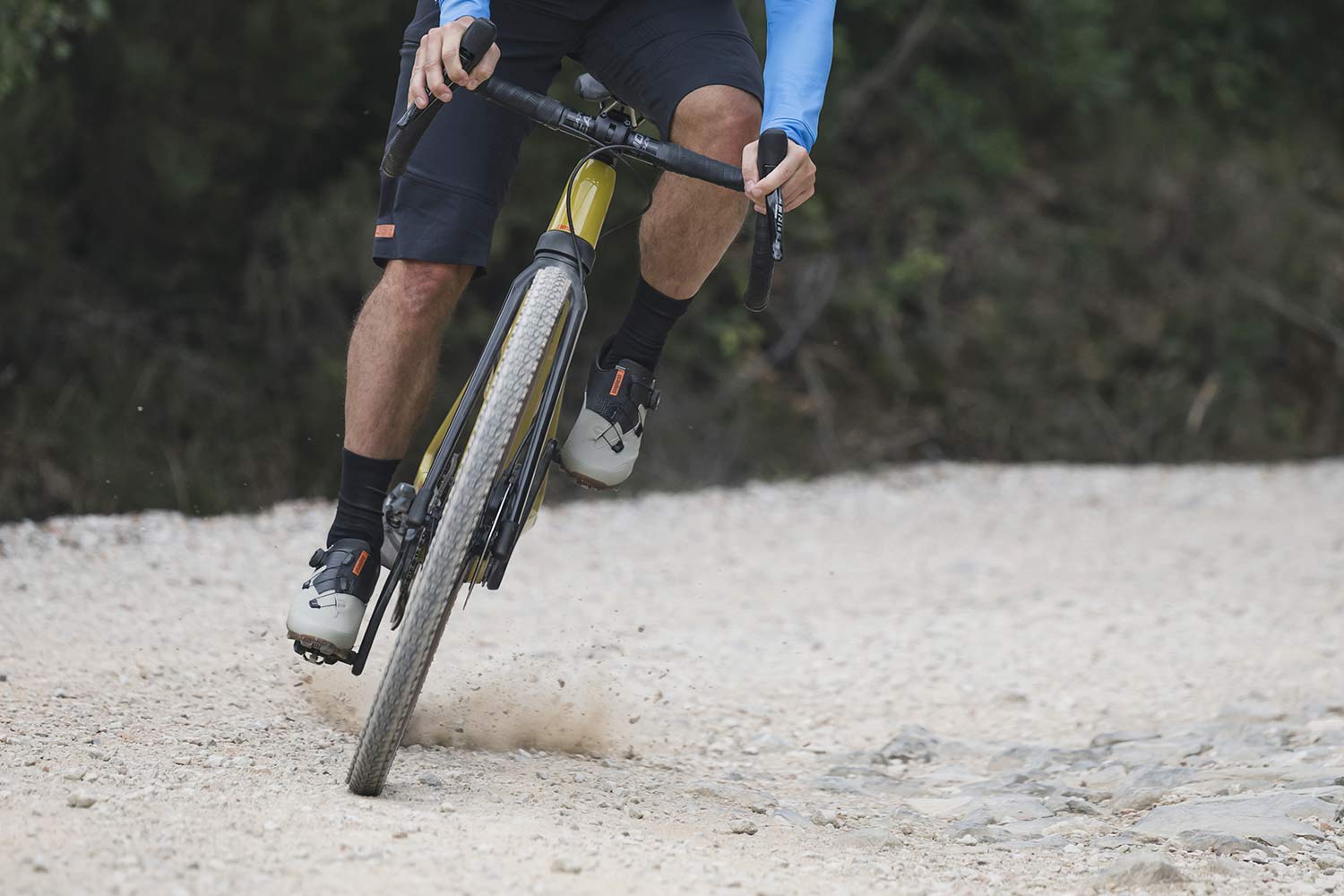 But the variable height, sharp edges, and careful placement of the transition knobs manage to deliver a predictable lean over to those well-supported, grippy shoulder knobs, all while never feeling slow when riding straight on pavement or hardpack like many mountain bike tires do. 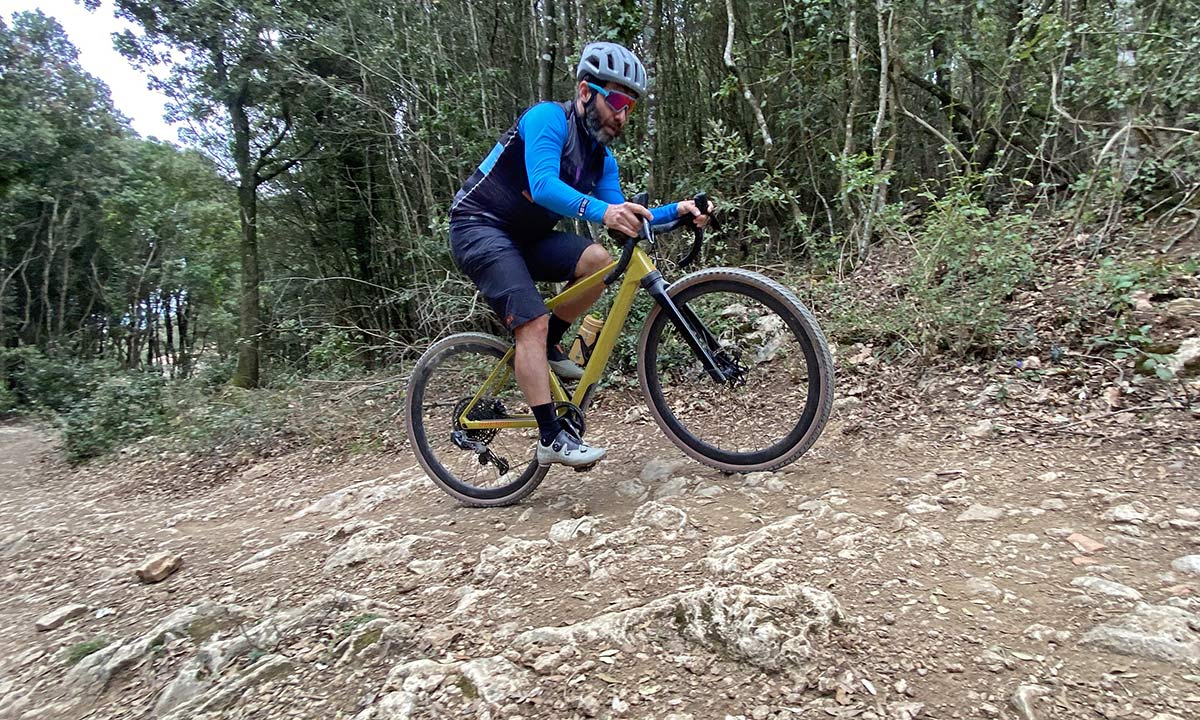 The Tundra roll fast on hardpack dirt and don’t feel like much of a drag on asphalt. In deep, loose gravel the tires consistently hook up well. And in both dusty berms and slightly wet dirt, leaning over hard delivered consistent support & grip. If you ride more asphalt than deep gravel, the Touareg is still the better option (and likely still my first choice for long-distance gravel riding). But if you spend more time in the dirt, and especially if those trails tend to be wet, the new Tundra is likely a great off-road gravel tire choice. 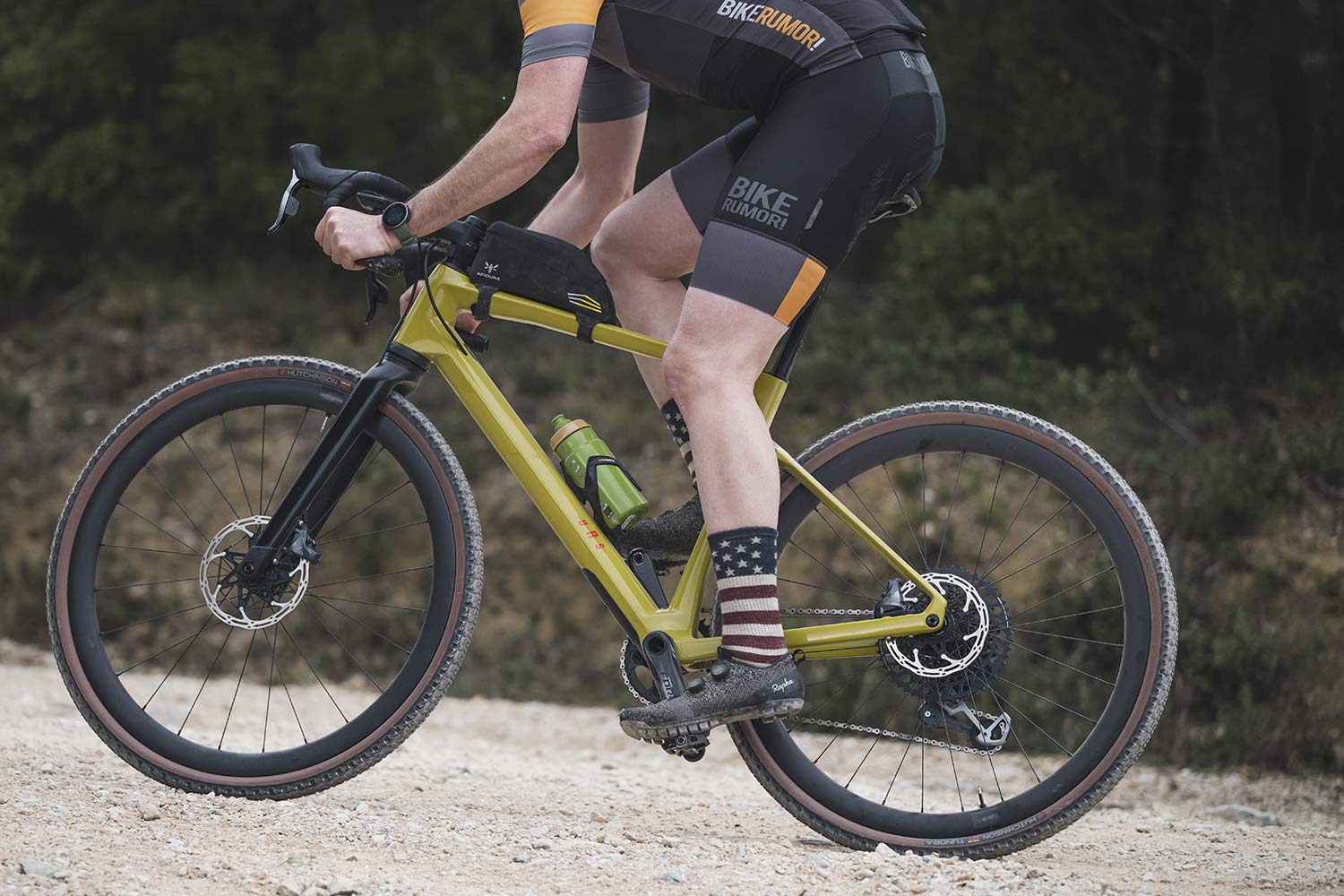 1990’s mountain biking all over again.