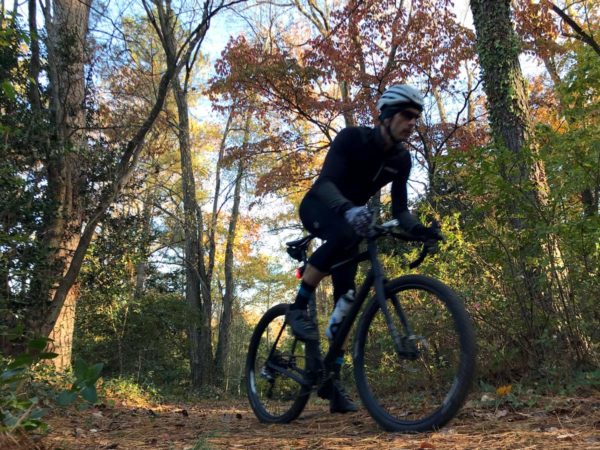 After Chris McNally put this early test production version of the all-new Ibis Hakka MX through its paces in the New Belgium Ramble Ride in Asheville, we picked it up for long term testing. A few rides in under two different riders, early impressions are very positive. Considering it came to us after hauling a full bikepacking load in a multi-day event, the bike looks and rides perfect, barely a scratch on it, and nothing’s creaking. In fact, it’s almost perfectly quiet, which is a huge accomplishment considering we’re riding flat out across root sections, gravel trails, and curb drops. Sure, there aren’t many cables and hoses running on the bike, but still, it’s off to a good start. 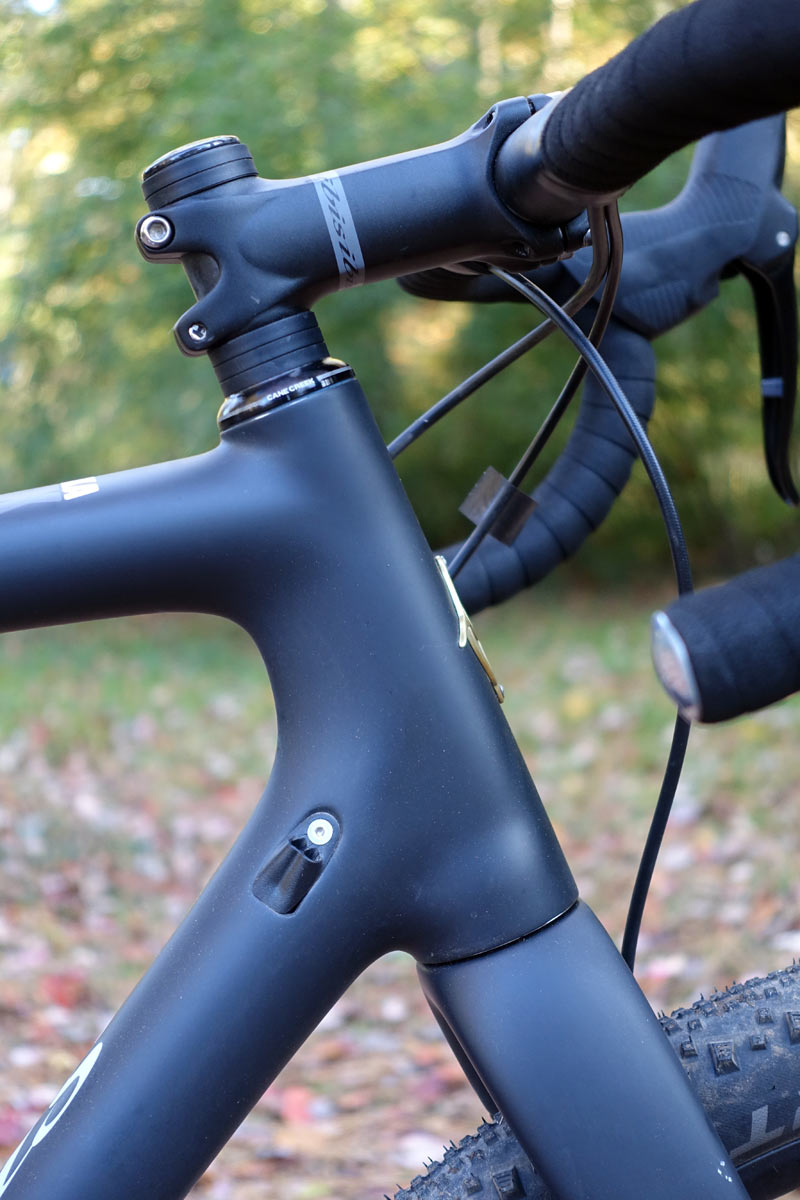 Up front, things look very normal. No oddly shaped tubes, just the slightest bump at the bottom of the headtube, and mostly round tubes. It’s not until you get to the super-dropped chainstay that it starts showing a personality. Riding it is much the same – hop aboard and it’s straightforward. Pedal and it goes, rather efficiently. Drop into some dirt and the personality starts to show there, too. In a good way – nothing weird. It just likes the dirt. And the road. I sprinted up our neighborhood hill intervals and it obliged. I flicked it onto the grass paths that skirt residential parks, and it held the line. Basically, it just did what it was told in a totally predictable manner. 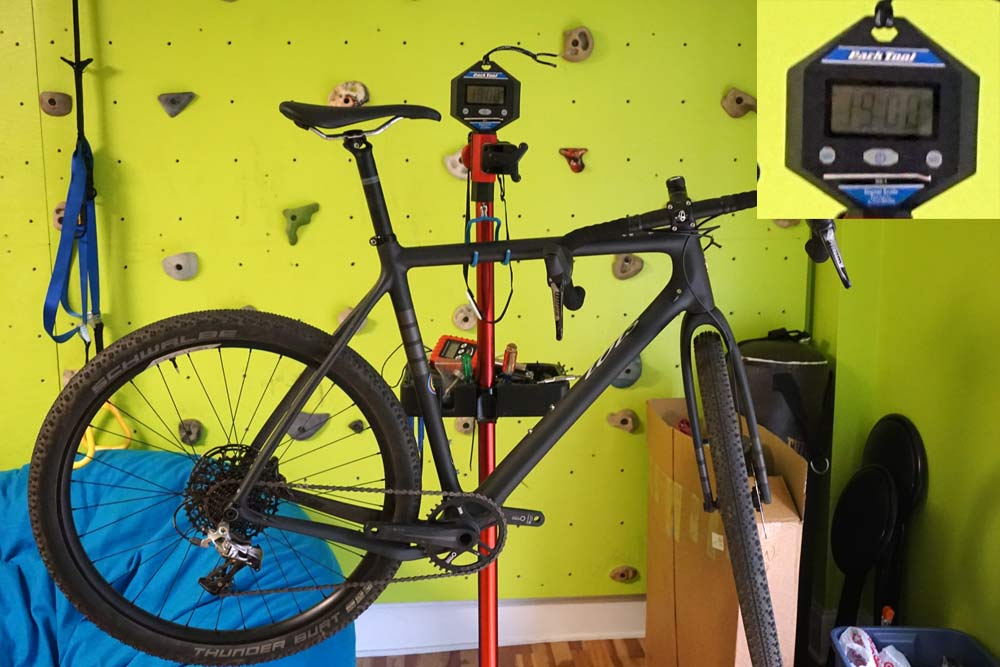 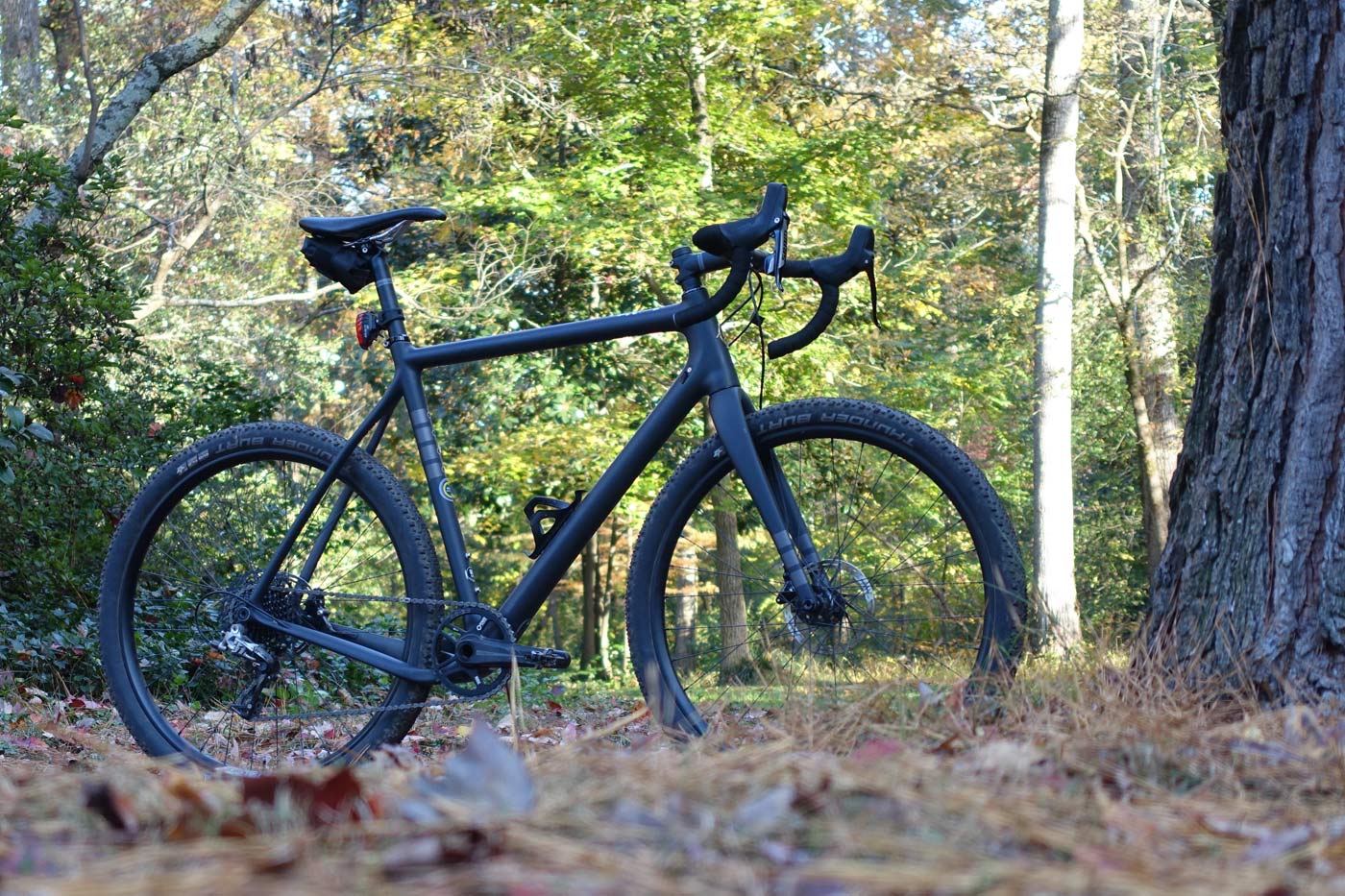 This is the first “gravel” bike I’ve ridden with 27.5″ mountain bike tires, and I’m impressed. The Cannondale Slate I reviewed also had 650B (aka 27.5″) wheels and tires, but nothing with the (slightly) extra tread used here. The extra traction and buoyancy made the rougher rows of roots far more manageable. And I didn’t feel any slower. To be totally honest, I just assumed they were 29er tires until I got the spec sheet in from Ibis days after receiving the bike, at which point I double checked the sidewalls. Sure enough, 27.5×2.1. It seemed to roll along just as quick as my other gravel bikes with 700×40 tires. If you’re riding a rigid hardtail mountain bike, this could easily replace it…and make you faster.

So far, first impressions are good. This is a bike I could see myself grabbing almost any time I wasn’t riding my full suspension mountain bikes. Trip to the store? Yes. Gravel ride? Definitely. Cyclocross training? Sure, with 700×33 wheels and tires. Group rides? Why not…Barring a straight up race bike, the new Ibis Hakka MX might just be the only bike you need with drop bars.

Check out full tech specs and details in our launch coverage here.

this bike will literally take you places

Tyler, are you limiting yourself to 33c tires for cyclocross because you’re doing UCI races? Why not use 40c or even 27.5 x 2.1?

Yeah, I like to see what I can do within the rules, otherwise I’d feel like I’m cheating. Even though they don’t really enforce it (at all) in the NCCX state series, I wouldn’t be able to gauge my performance against others equally if I had larger tires. Most of my competition is running 33’s (from the looks of it anyway) with a few obvious 35mm tires on the course. I’ve only seen a couple folks running 40’s or full-on MTB tires.

Also, since most of the bikes and tires I’m riding/racing in cyclocross are things I’m reviewing for this site, I tend to run proper (legal) CX equipment because that’s how they’re sold and delivered.

I can see your point, but I could just as strongly argue that “proper” and “legal” in non-UCI and non-USCF races like we have here in the Northwestern US should legitimately include 40c and larger tires. It’s just progress, or on the flip side, we feel OK ignoring stodgy old Swiss guys who work for the UCI.

i agree with you to Tom that’s why i going to turn up to your next race on my wr 450 man i going to smoke some people, stuff the rules i’m out to win, now there’s progress strava here i come!

this is absolutely the type of skinny tire bike that 80% of ‘road’ market should be riding, copying Gerard Vroomen’s Open U.P. was the best idea Ibis could have had.

Why should 80% of the road market be riding this?

coz 80% of road “race” bikes are underutilized and said owners would be better of with a do it all bike for just plugging away and having a good time!

Why 80%? Because dustytires independent research findings conclude that 79.82% of ‘road’ market should be riding this type of skinny tire bike. Therefore, dustytires merely rounded-up the number to 80. Even with the +/- 3% error margin, dustrytires is being reasonably scientific in his conclusion. Subscribe to dustytires to stay on top of the latest research.

terp research is a Russian funded research study “One UPsmanship in the Roadie Goes Gravel Movement” has not been peer-reviewed (nor even beer-reviewed). Therefore terp research and its 160% finding must be considered dubious.

How is this a copy of the Open U.P.? Are you referring to the drop stay? That’s been around since the late 80’s..

Nearly perfect. Subtle fender mounts on the fork similar to what the frame has would make it perfect. Whisky Parts has such a fork.
http://whiskyparts.co/forks/no9_cx_fork

Can you explain why it’d be faster than a hardtail mtb on the same tires? Simply the aerodynamic benefit of drop bars?

I think so, cause they’re MTB hardtails that are just as light and the front suspension will make going through rough obstacles faster then a rigid gravel bike.

Saying that, I took my 2017 Roubaix (the one with FutureShock) on a local MTB trail the other day, the handling and how fast the bike goes totally caught me off guard even though I rode on that trail many times before.

Riding position, geometry, and drivetrain/wheels. Imagine the difference between the two with a set of street tires on the road. The MTB will be significantly slower.

Drivetrain/wheels? They are the same except the shifters. A road rear derailleur will not make one faster than a mtb based one. They do the same thing.

The only reason a XC racing geometry mtb would be slower is because they tend to run higher stack heights and that would affect your aero position. Handling will be vastly different, but are we now going to say the slacker XC racing MTB geometries make one slower through more technical terrain?

By drive train, I was referring to gearing combinations. MTB rear gear clusters are much wider with bigger jumps between gears. Road cranks don’t fit on MTB’s so you’d have smaller chain rings, putting you in the smallest cogs on back at road speeds. Small cogs are noticeably less efficient. Wheels are heavier and typically have more spokes, so they’re less aero.

Weight could be similar if one spent many thousands on their MTB, but come back to the middle of the price range and the MTB picks up several pounds, whereas a road or gravel bike gains far less at the same price reduction, so for the vast majority of riders, the drop bar bike will wind up being much lighter.

An MTB could be a good deal more comfortable for gravel racing or CX, even with both on the same tires but there’s good reasons why you don’t see many guys choosing to go that way. It’s slower. Try it and you’ll see.

I don’t disagree with those points. My original comment more reflected the article mention of it being faster than a rigid, which I maybe mistakenly take as being ridden on more technical terrain than gravel.

Who is Chris McNally? Is he a euro-pro

Being so late to the market with a type of bike that everyone wants just screams profiteering. Zero respect. Where was this when the desire was strong but market demand was low? BS. I bought 2 bikes with these specs just waiting for ibis to come with a proper hakkalugi. Late to the game, followers, not innovators.

@Andy: Get a hobby dude. You know that development of a nice carbon frame takes a while and costs a fair bit too, right? A small company like IBIS has to prioritize their resources, and then you go an bash them for it.

“but market demand was low?”

That’s pretty much the answer, right there. Now gravel is getting popular and you’ll see bigger brands throwing their hats into the ring, and it’ll be good for the rider because there will be more choices and better availability.

@Andy – Ibis was years late to the market with the Ripley, you know the first iteration that was one of the best trail 29ers around.

This looks really cool. They say you can run 2X but no braze on so you use a clamp on front der with a carbon seat tube? Is that kosher?

What I want to know is whether the MX has the same toe overlap issue as the Lugi Disc? The HTA is steeper, and the top tube is 5mm shorter on the 55. Wheelbase is 3mm shorter, so it seems it will be even worse?

Not sure why you are experiencing toe overlap. I ride a 55 cm disco Lügi and never had an issue.