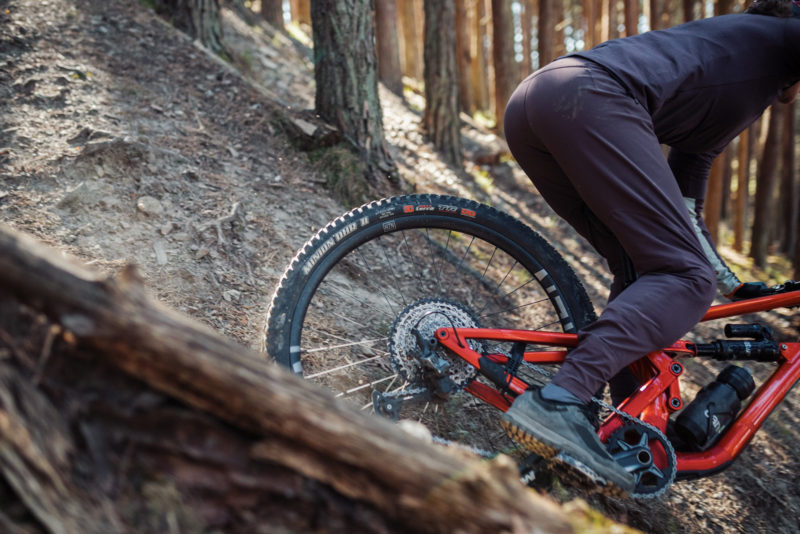 Last year, Nukeproof updated their long-standing aluminium enduro wheelset, adventurously naming it the Horizon V2. The overhaul saw Nukeproof replace 29mm WTB rims with their very own 30mm internal width rims. They maintain a symmetrical profile, but now lace those rims to the Horizon V2 fast engagement hub, increasing the POE from 42 to 102. Reasonably priced at £399.98, this wheelset is likely an attractive option for folk looking to upgrade their OEM wheelset, especially in the knowledge that Team CRC spent the 2021 EWS Season on them.

I’ve spent a solid six months riding the Nukeproof Horizon V2 alloy wheelset on my local enduro trails in the Tweed Valley, Scotland; recent host to the EWS season finale, might I add. I’ve also ventured out of the valley to the granite rock descents of Fort William and Aberdeenshire, the fast and loose downhill tracks at One Giant Leap in Wales, the lesser-spotted loamy singletrack of the Lake District, as well as the sculpted berms and booters of Bike Park Wales. Thus, I’m satisfied this wheelset has been put through its paces sufficiently. Here’s how it fared. 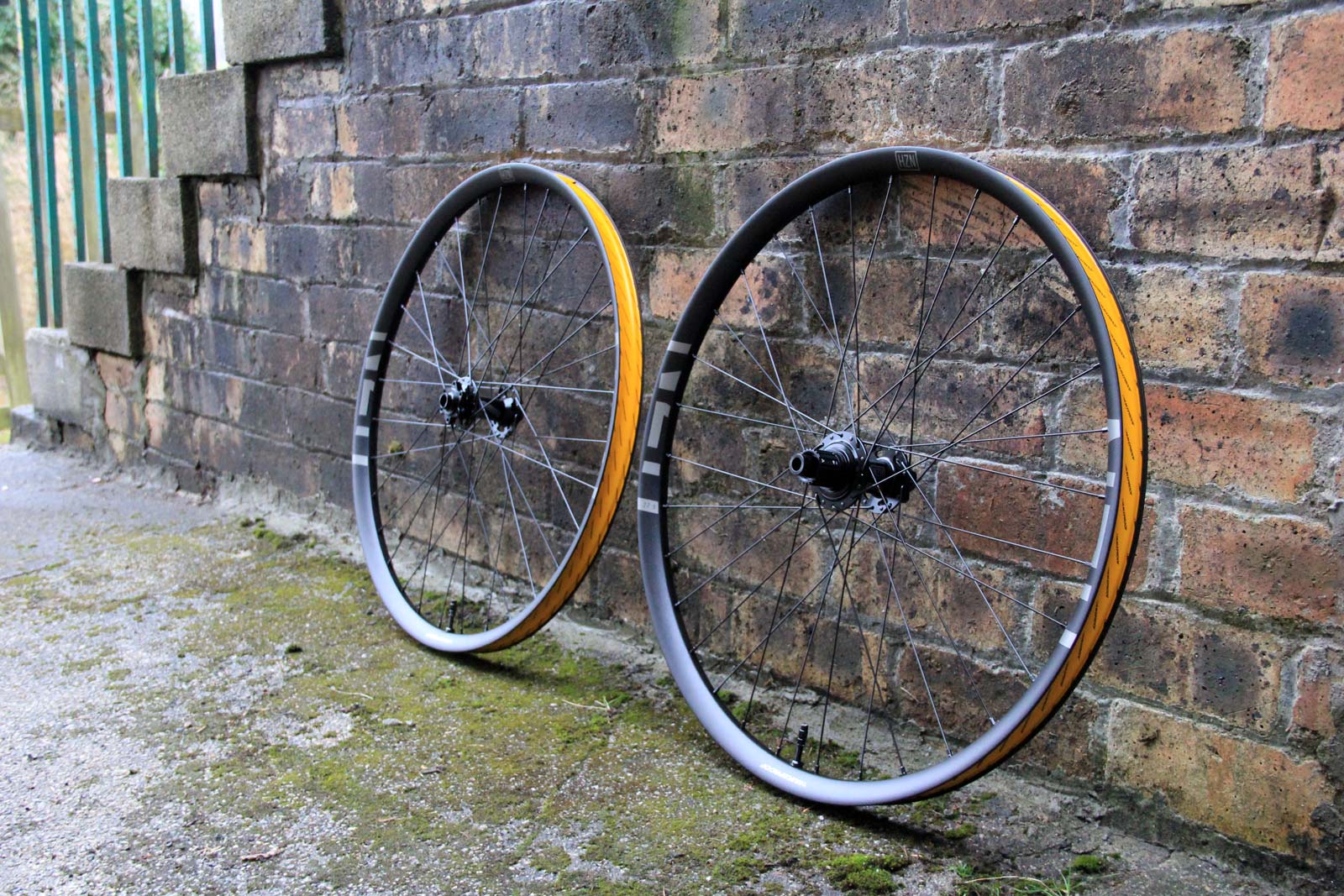 The Nukeproof Horizon V2 wheels are hand built, laced with 32 J-Bend spokes laced in a three-cross pattern to 6-bolt hubs

The 27.5″ Nukeproof Horizon V2 wheelset arrived taped with their tire insert compatible tubeless valves pre-installed, ready for a quick tubeless setup. The front wheel weighed in at 0.83 kg, while the rear with MicroSpline freehub body weighed 1.07 kg, giving this aluminium wheelset a total weight of 1.9 kg. Both wheels arrived round and true, not something to be taken for granted.

The valve cap of the pre-installed rims is also a valve core removal tool, though the metal bends easily if you accidentally over-tighten the core; the valves work very well with tire inserts, allowing air and sealant to flow freely.

If you’re looking to build your own wheelset, you can also pick up the Horizon V2 rims separately for £70 a piece. They are made from a dynamically aged magnesium-silicone enriched alloy blend, said to give the stiffness and hardness of a 7-series alloy, but the ductility and yield properties of a 6-series. We measured the internal width at 30.3mm, the external at 35.2mm, the height at 21.5mm, and the rim edge at 2.5mm thick. 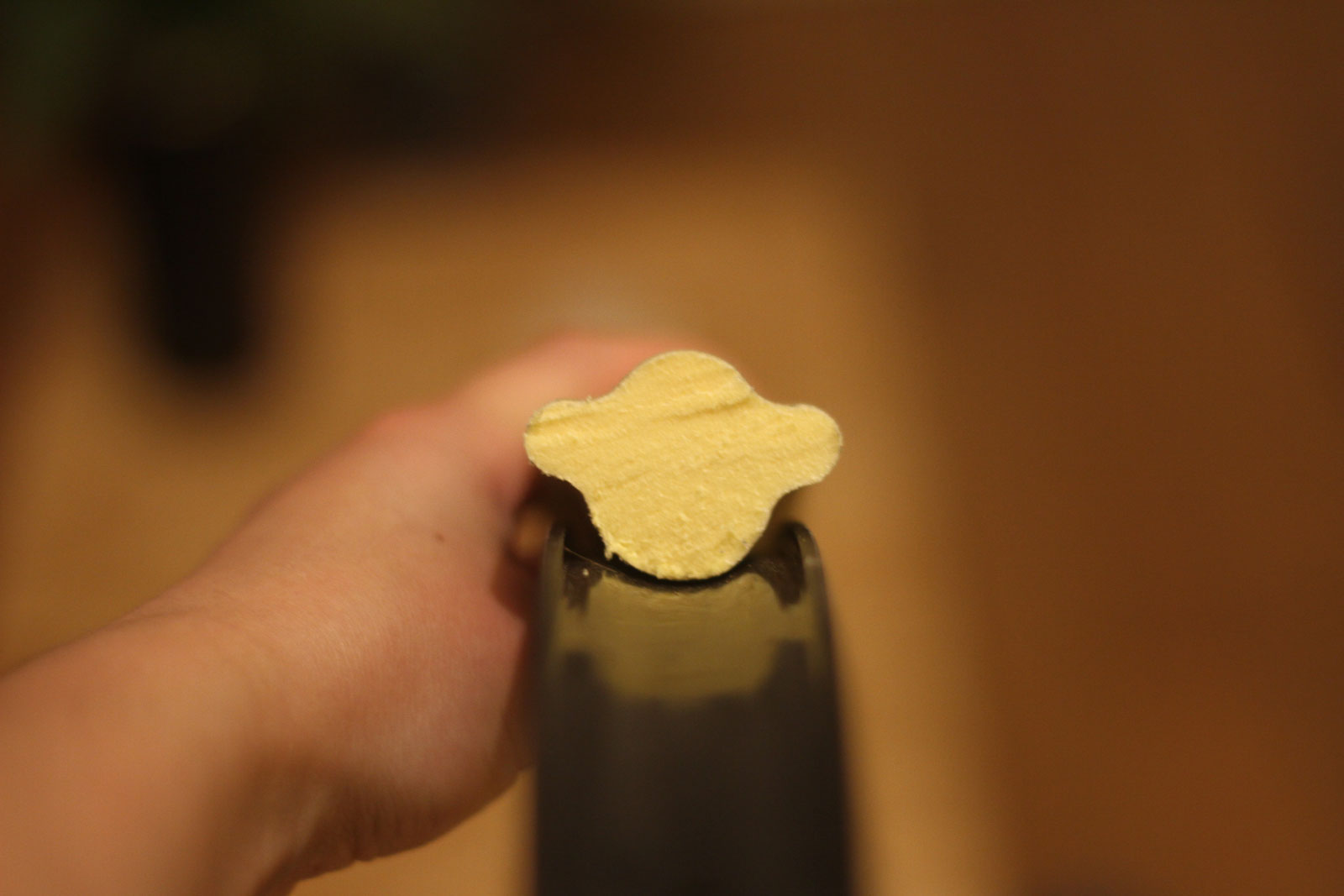 It should be noted that I spent much of the review period also testing a number of tire inserts (see reviews for Nukeproof ARD, CushCore Pro, and RockStop). Please don’t think that invalidates the testing. For some of these tire insert tests, I dropped tire pressures to as low as 12 PSI (front and rear), cutting through the insert material on bottom-out on numerous occasions, so be satisfied the rims have taken a fair beating. 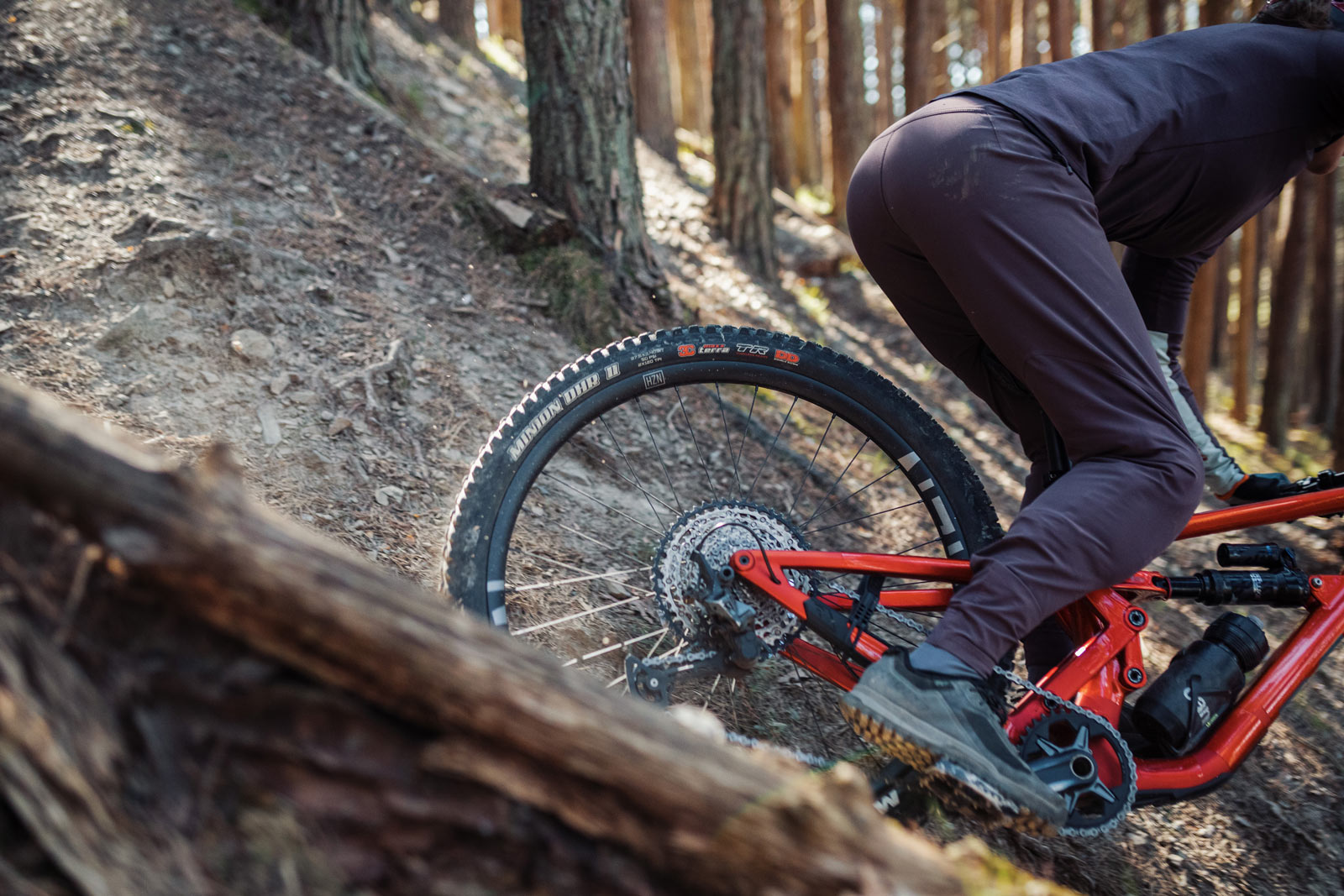 For the most part, testing was carried out with a 2.3″ Maxxis Minion DHR II Double Down casing tire on the rear, paired with a Maxxis Assegai EXO+ upfront. At 26 PSI, containing a Vittoria Airliner insert, the DHR II measured 2.28″ wide, with the sidewalls standing marginally proud of the outboard edge of the side knobs. Throughout the test period, this rim-tire combination has held pressure very well, with no issues seating the bead onto the rim. The rim tape has been changed once as it was nicked during a tire insert install at some point along the way.

Horizon V2 On The Trail 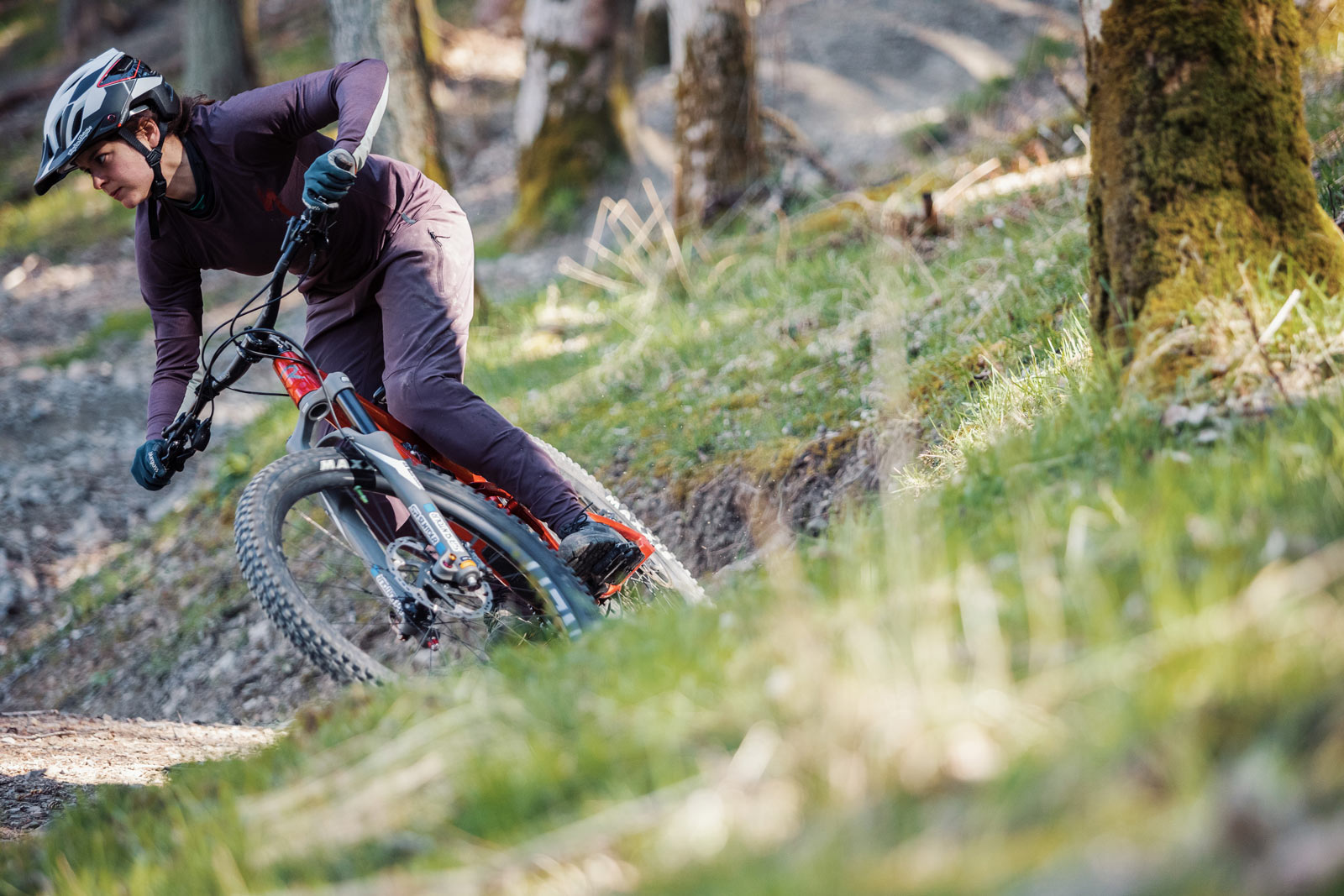 I have no qualms on the ride feel of the Nukeproof Horizon V2 wheelset. Through loose rock and rooty chunder the wheels felt stiff enough to offer good precision, with no undesirable flex felt through hard cornering. The 3.52° engagement of the hub is a welcome update, delivering fast pickup when you want to put in that quick half-pedal stroke through technical terrain, and when you need to get back on the pedals frequently through undulating terrain. The 0.12mm thick pawl springs deliver a loud buzzing sound when freewheeling, feedback as to how fast or slow you’re rolling. You can upgrade to thinner 0.1mm pawl springs if you’d prefer a quieter hub. 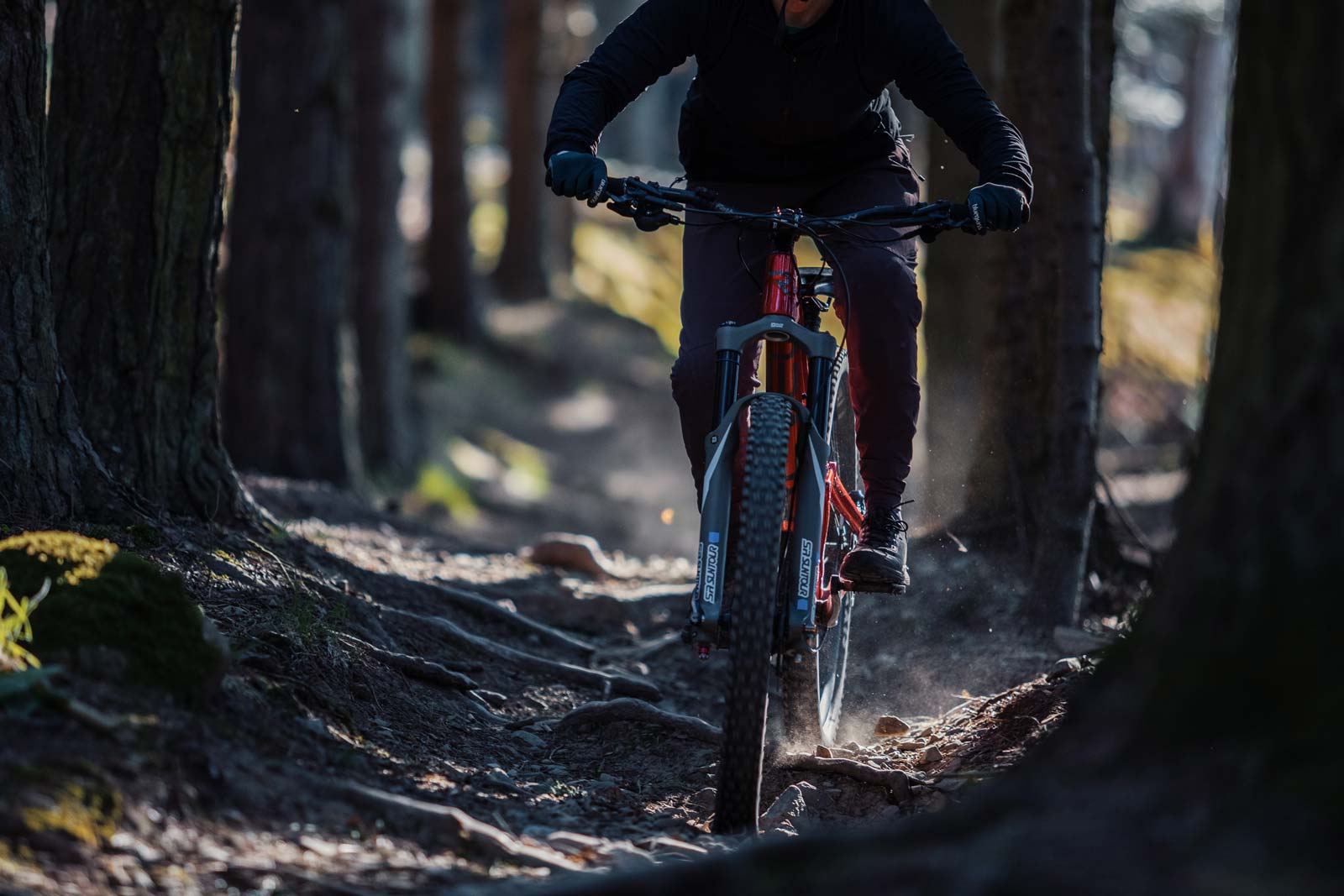 Aside from that, I don’t have too much to say about ride feel. At least for the first four months of the review period, I had no reason to consider the wheels at all, in that they were performing well on a variety of terrain, rolling freely to the point where they basically went unnoticed.

How did they hold up?

It wasn’t until I came to swap the Shimano SLX cassette for an XT cassette that I came across any issues. Removing the cassette revealed the MicroSpline freehub body which had suffered obvious wear along the splines. Small detents along the splines, where the cassette pushes against to drive wheel rotation are generally to be expected. 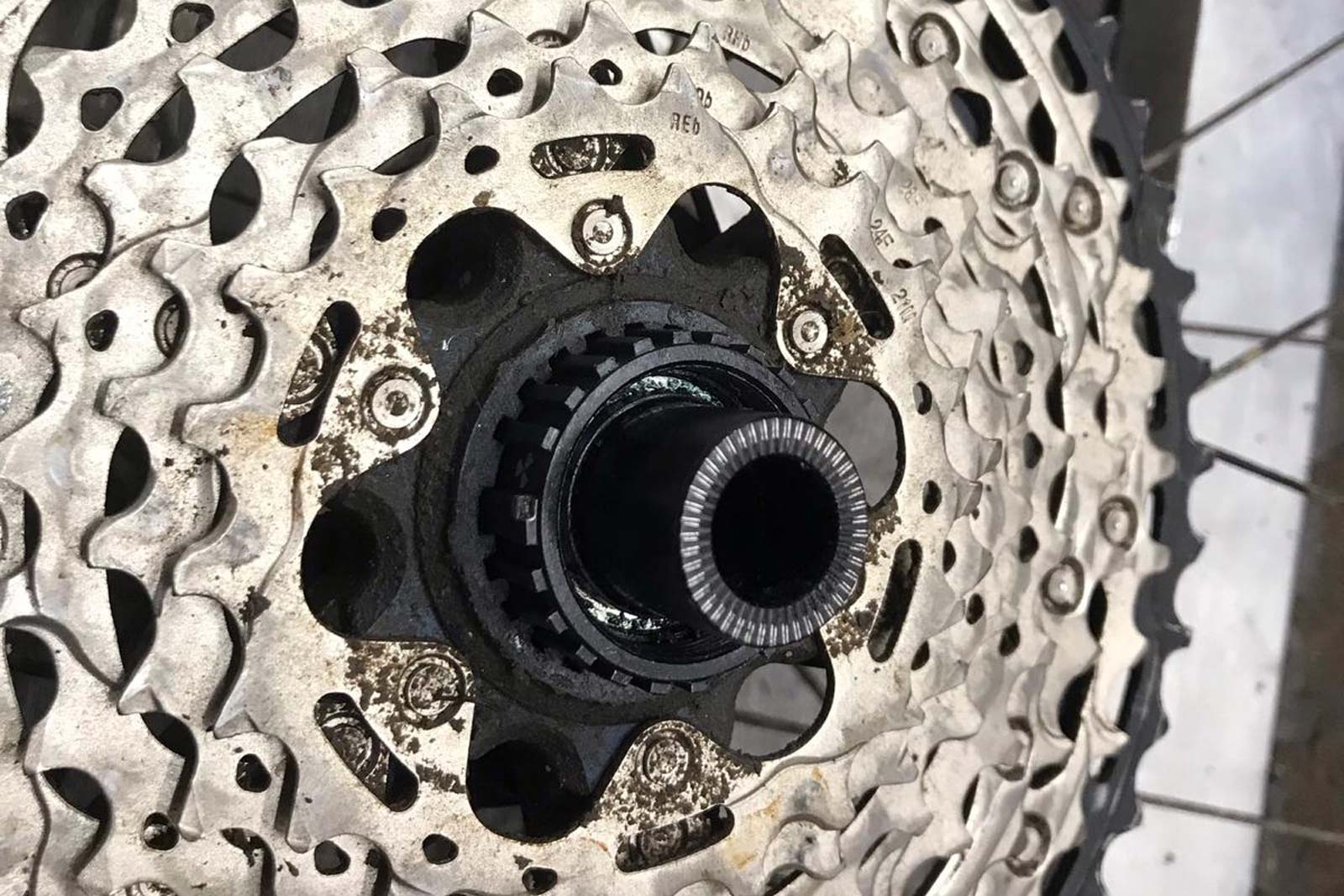 Rob Sherratt at Nukeproof informs us the brand will soon be offering steel versions of the MicroSpline, HG and XD freehubs for the Horizon V2 wheelset

However, the outboard edges of some of the splines had cracked, with some material having sheared off under load. This is where the smallest sprockets interface with the freehub body, so likely where the highest torque is experienced. 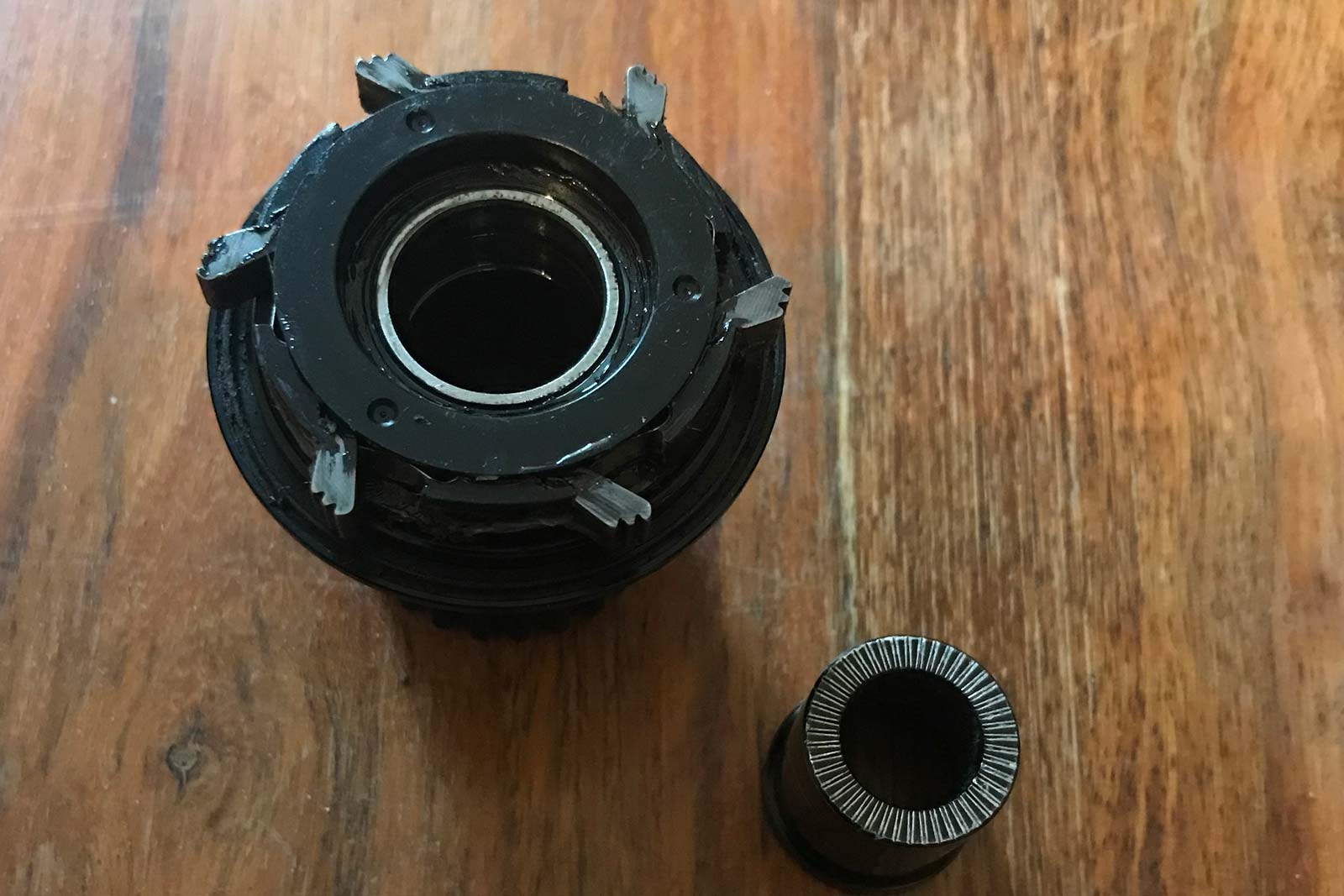 Following an inspection of the six triple-stepped pawls inside the freehub mechanism, I’m pleased to report they are all still intact, with no evidence of any cracks forming. They still spring back freely when compressed, with no hint of sticking. The hub internals had suffered dirt ingress, as is to be expected after 6 months of UK riding.

The Enduro ABEC 5 bearings inside the hub are, admittedly, quite rough, and will soon be in need of replacement. That’s not a complaint; this wheelset has seen a great many miles, having survived a whole season of enduro riding and racing. The bearings have an LLB/LLU full contact seal type with two lips that make light contact within a groove. 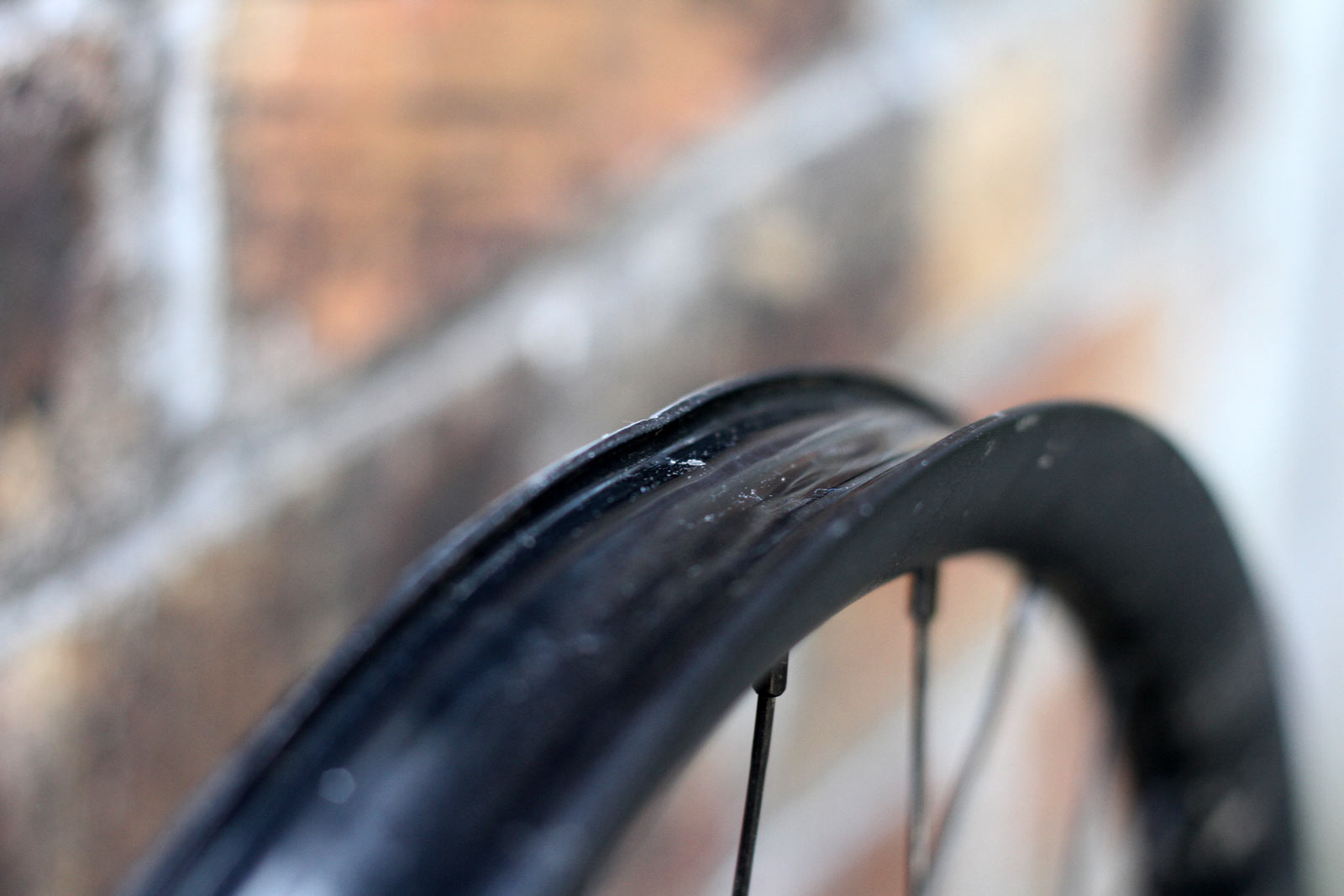 How about the rims? Only one incident of note, here. I put one ding in the rear rim while riding Fort William’s Top Chief descent, the offending article being a chunk of granite rock which makes up a good 70% of the trail’s surface. Running 22 PSI in an EXO+ casing tire with CushCore Pro installed wasn’t enough to protect the rim entirely. Externally, the ding is subtle but damage to the rim bed is evident upon closer inspection. There’s also a very subtle flat spot in the rim as a result, too. The wheel is no longer true, with the non driveside spokes having lost measurable (by feel) tension in some areas. 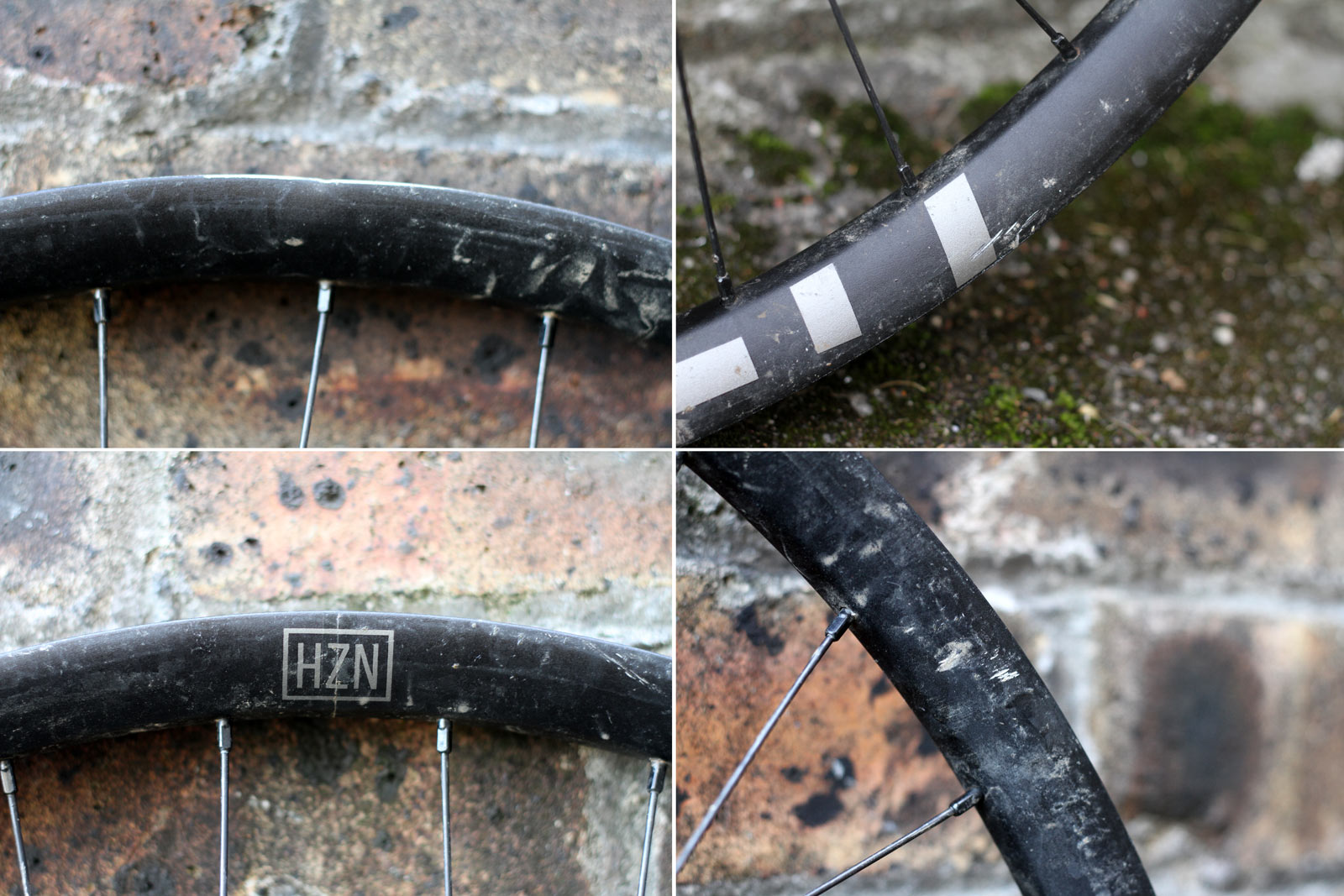 Top left; the one and only rim ding sustained over 6 months of riding, Top Right and Bottom Right; aesthetic damage to the rim finish, Bottom Left; no damage at the sleeved rim join

To come away with the abovementioned damage only, after being the subject of several tire insert tests where pressures were dropped as low as 12 PSI (more often around 17 PSI), is a credit to the rim strength. The rim also suffered a good bit of aesthetic damage, with chips to the finish and, in a few places, small gouges to the aluminium; none of these had a functional impact on the wheelset. 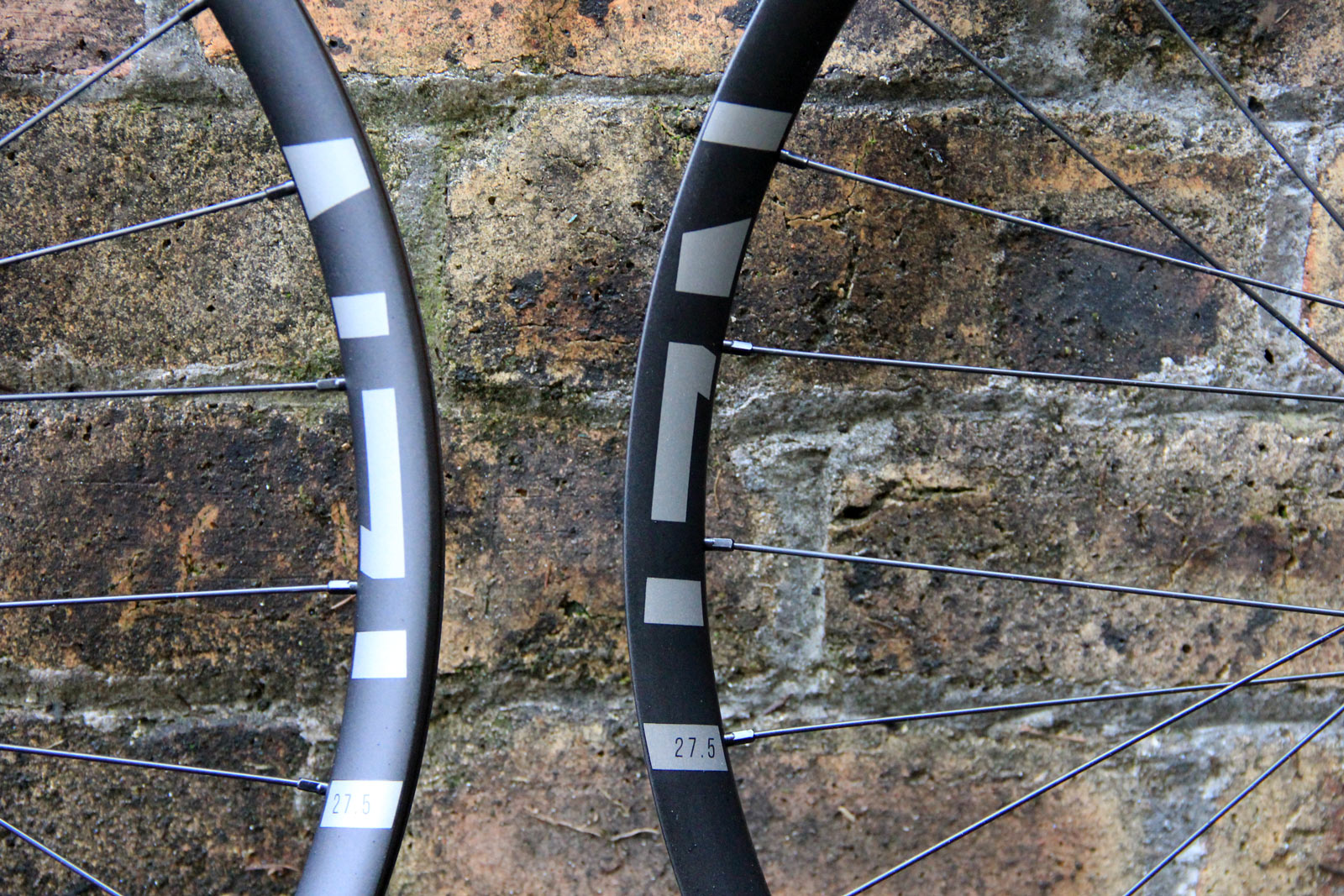 The Nukeproof Horizon V2 wheelset is available with the 6-bolt standard only (27.5″ and 29″) retailing at £389.99. You can also purchase the front and rear separately at £149.99 and £249.99, respectively. The rear wheel is available in boost (148mm) spacing for Microspline, HG, and XD drivers. You can also get it in 142mm with an HG driver only, and 150/157mm spacing with HG and XD drivers. Nukeproof also offer 15mm RockShox Torque Caps for the front wheel for use in downhill applications.