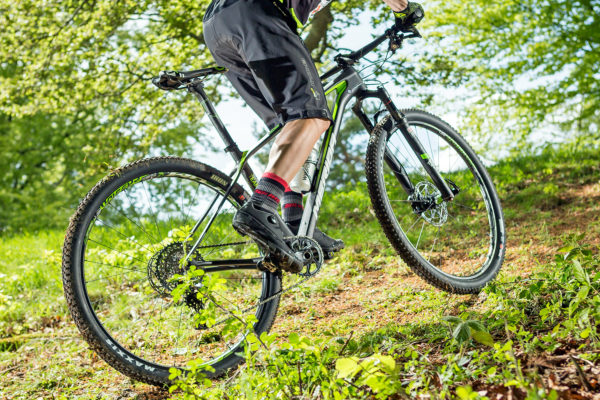 Last year Merida reworked their cross-country race full-suspension bikes, so it was time to do the same with their hardtails. Again they used the German XCO World Cup race in Albstadt to bring out the new bikes. The BIG.NINE is Merida’s revised top-end, lightweight XC race bike and gets updates to its geometry to handle the elite race courses which are trending towards the more technical. At the same time the bike makes improvements in both weight reduction and comfort to satisfy racers of all levels. The BIG.SEVEN takes essentially the same steps, but with smaller 27.5″ wheels for smaller racers or tighter courses. Added in is the all-new alloy BIG.TRAIL that pairs long, low & slack with capable components and plus-size tires for a fun and more affordable ride. Take a closer look at all three after the break… 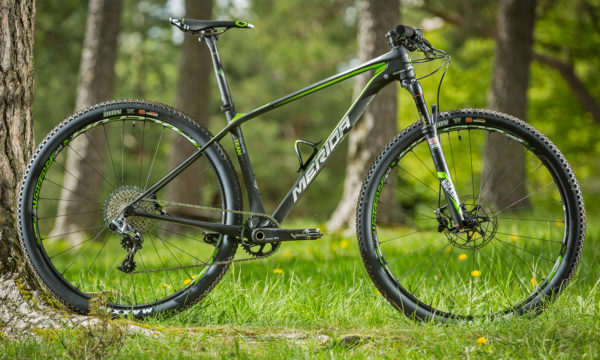 Weight has always been a big focus for Merida and their carbon XC bikes, with a strong focus on pro racing. The new bike shaves weight to get the complete bare 29er frame down to a claimed 900g. Then for a more realistic weight, add about 104g to throw in the essentials like its seat clamp, DT rear thru-axle (minus its removable 6mm allen lever arm), Smart Entry routing setup, replaceable derailleur hanger, and chainstay & downtube protectors. Add all that up on complete bikes, and the top Big.Nine Team comes in at just 8.5kg/18.7lbs.

Merida makes those weight savings with new and improved carbon base material, further optimization of their layups and the frame’s EPS core, and a revised all-carbon integrated headset. They also eliminated the front derailleur for 1x specific setups across the board on the top-end CF5 carbon hardtails; the same that are raced by the Multivan Merida team. Both 29″ & 27.5″ bikes will also be available in a slightly heavier and less expensive CF3 version with lower grade, less advanced carbon (and the possibility for a side swing front derailleur.) Alloy ‘Lite’ versions appear to be in the pipeline as well. 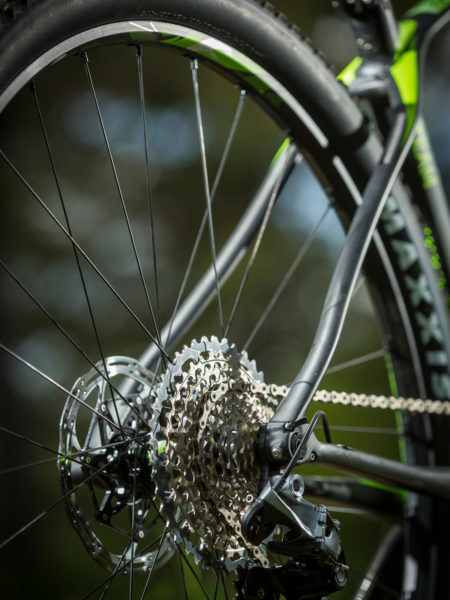 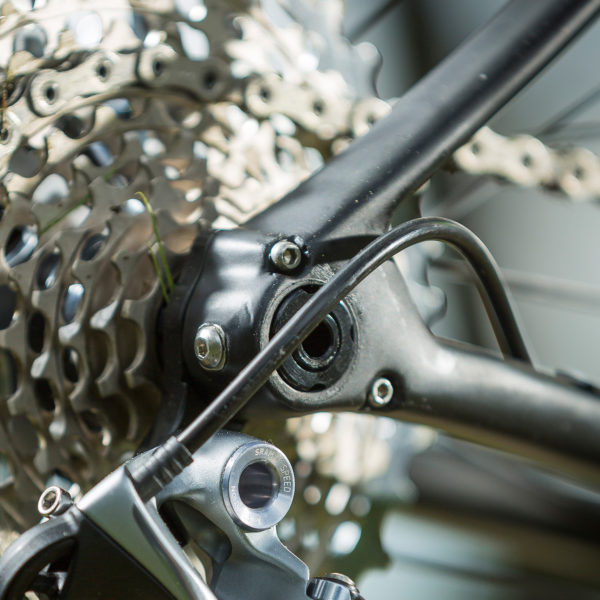 To make comfort improvements over the last generation of bikes, the new frames use thinner seatstays to act as a flat spring. Those pair with chainstays that quickly taper from a deep section at the bottom bracket to thin in front of the axle to allow for controlled vertical flex. Merida has also added some new undefined Bio fibers into the rear end to add a bit of extra vibration damping. 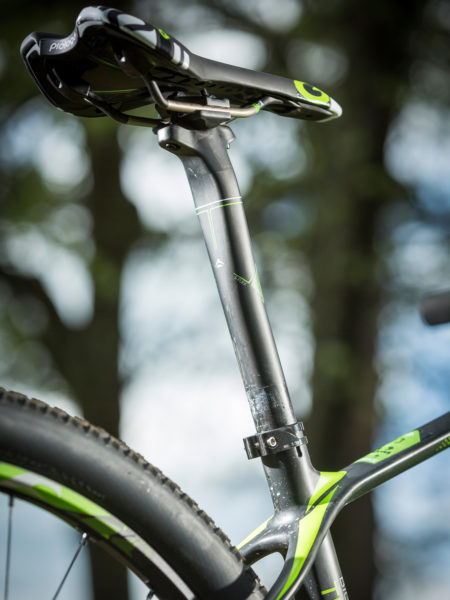 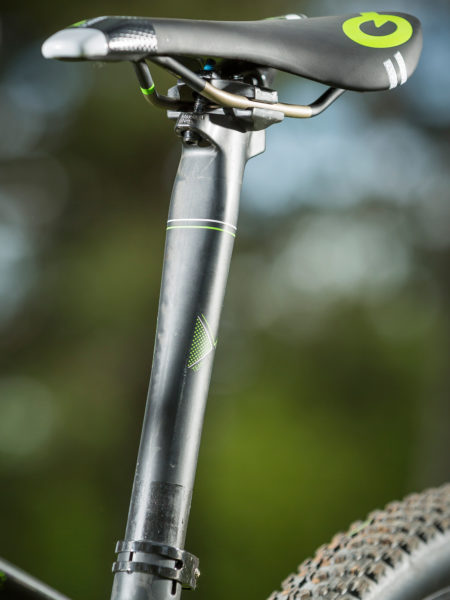 Lastly they’ve put a good bit of effort into designing a comfort-boosting seatpost that lessens shock without feeling too flexy. The new post gets a unique shape that is dramatically flattened laterally at the top to confine movement close to the saddle clamp. 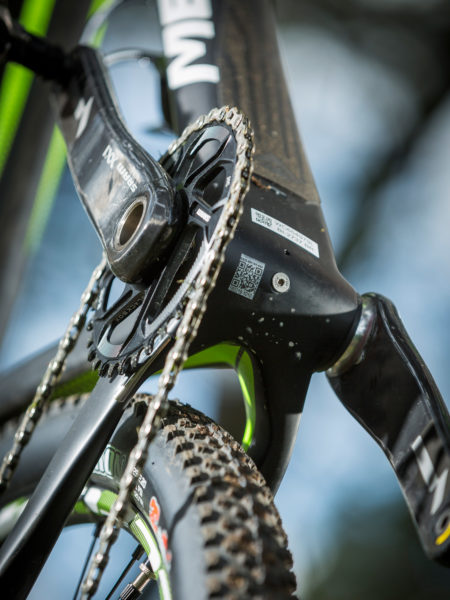 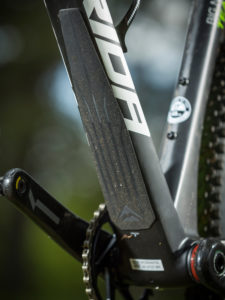 Carrying on from the previous generation the new Big.Nine & Big.Seven get wide downtubes coming all the way out to the edges of the press fit BB92 bearings. While the full-suspension XC bikes will have to wait until next year, the new carbon hardtails get upgraded to Boost 148 now.

Merida give the new hardtails their newest flexible cable routing port system called Smart Entry. The stops provide a more flexible solution for various cabling setups, and most importantly they clamp onto the housing at the stop and again at the bottom bracket to keep them from rattling around inside of the hollow carbon tubes. 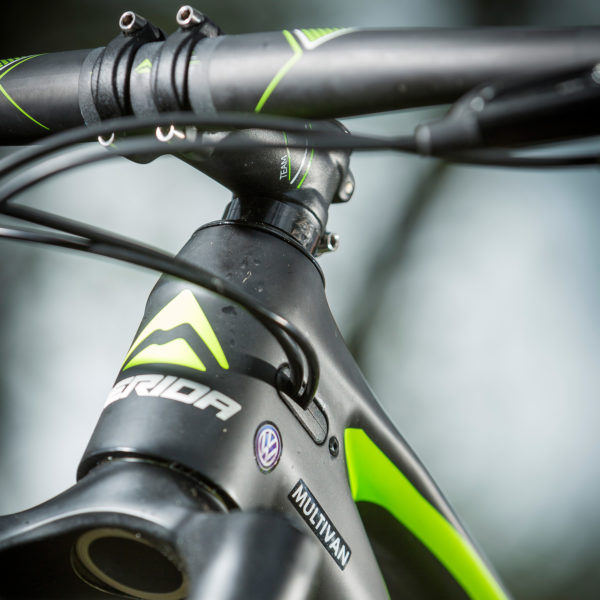 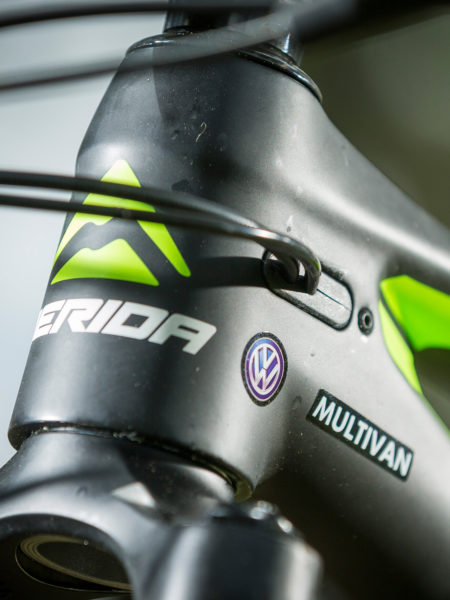 Geometry wise, bikes of both wheel sizes get shortened headtubes, so the pros can get that bar drop that they need. They also get longer reach in the top tubes and transition to shorter stems, and shorter chainstays. As is becoming more common, the wheels are size specific, with the XS being 27.5-only, the XL & XXL 29-only, and the middle sizes left up to rider and course-style preference.

While it is less common on mountain bikes due to their relatively slower speeds, Merida also chose to optimize the new bikes for aerodynamics. The new hardtails use a similarly shaped downtube as their Scultura Disc, and went through CFD simulations to try to eke out some aero gains. 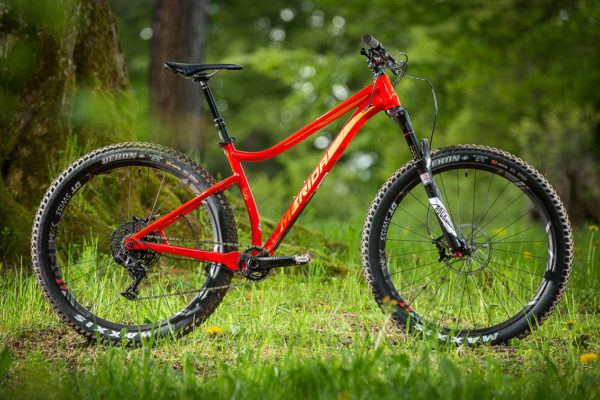 The Big.Trail is a bit of a departure for Merida who had previously only built hardtails with relatively tame cross-country riding in mind. Since they tended to put a lot of focus on racing (as seen by the fact that even this bike was debuted at the XCO World Cup), they hadn’t devoted much effort to the regular trail riding crowd, who maybe didn’t want or need the extra complication or cost of full-suspension, and wanted to hop on some fat tires. 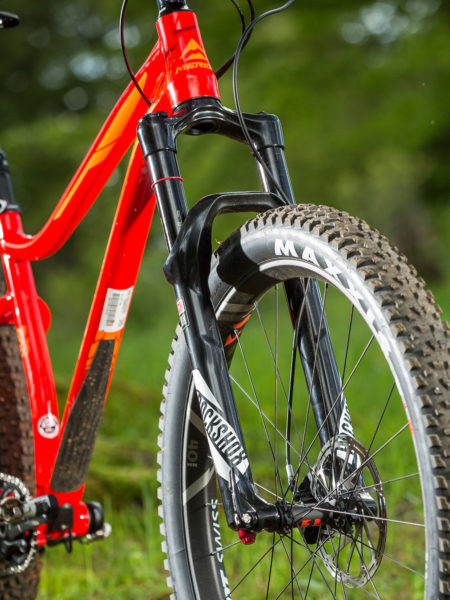 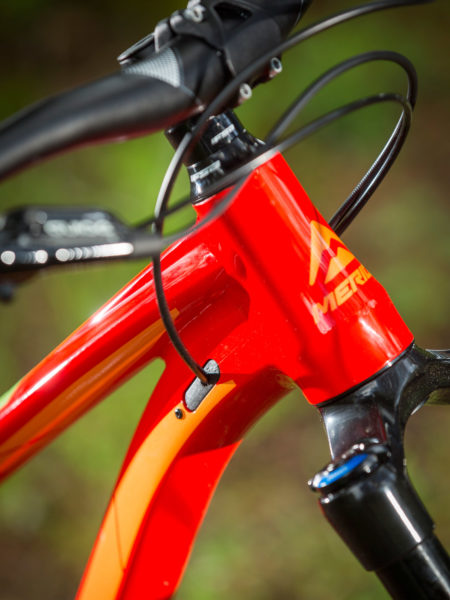 The new hardtail is built around the recent trend of trail geometry, so it gets long toptubes, low bottom brackets, and slack 67.5° headtubes paired with short stems. The frame itself aims to be lightweight, yet still strong to handle a 130mm fork. Key to the new ride, the Big.Trail rolls on a fat 27.5+ wheel/2.8″ tire combo, marking it as Merida’s first foray in to 27.5+. 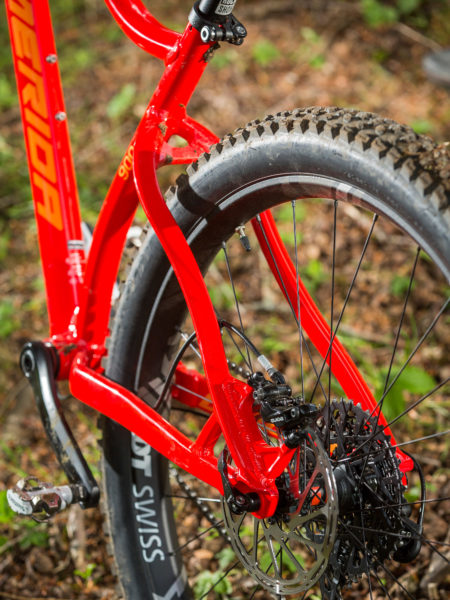 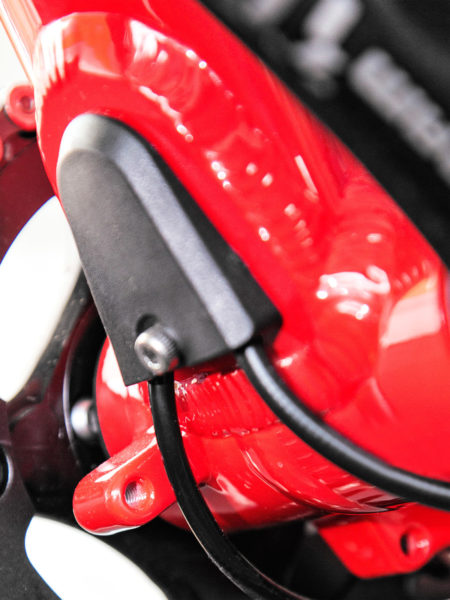 With hydroformed tubes and a lot of standover clearance, the Big.Trail claims a total frame weight of 2101g, including all the same essentials as the carbon bike, but with a standard thru-axle for the Boost rear end. 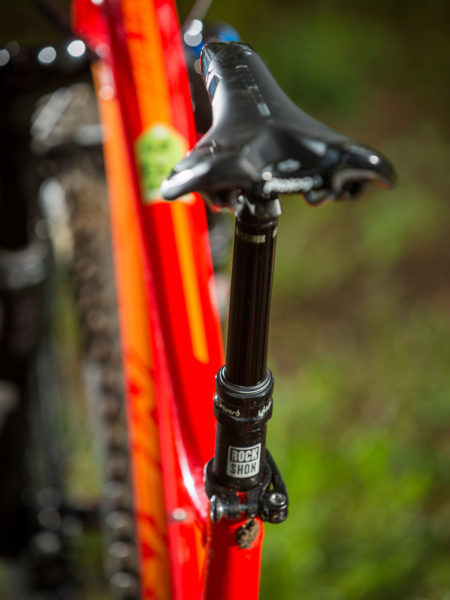 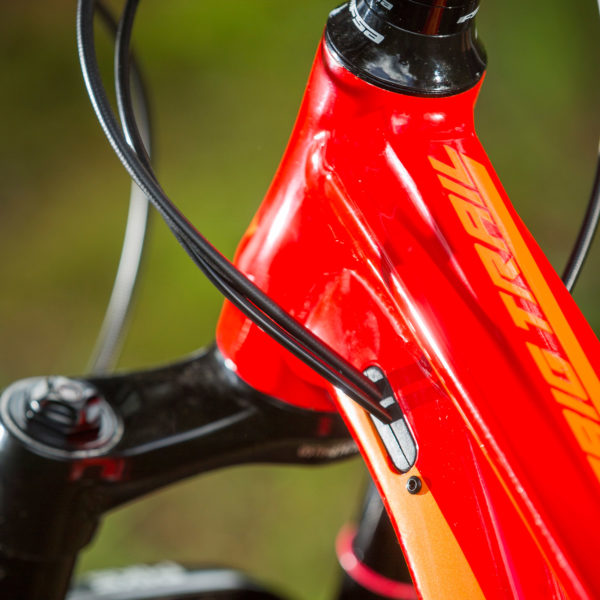 Every bike in the new line gets a dropper post to give you hardtail climbing efficiency, but plenty of clearance for bombing down the trails. The alloy hardtail also gets an ISCG05 mount, a BB92 bottom bracket, and the Smart Entry routing with an external housing clamp at the BB and external chainstay routing. 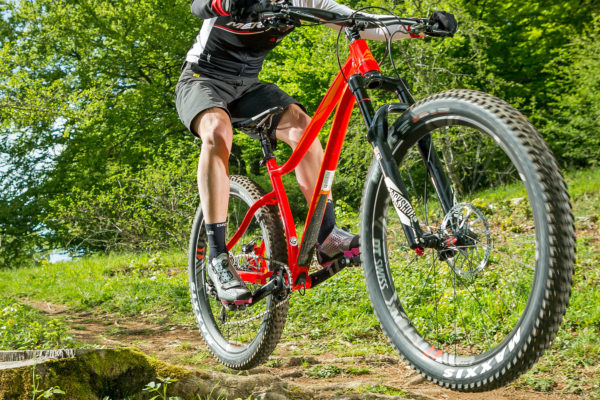 The Big.Trail will come in S, M, L & XL sizes and three different bike builds. No official word on pricing or availability, but we expect to get the details late in the summer. 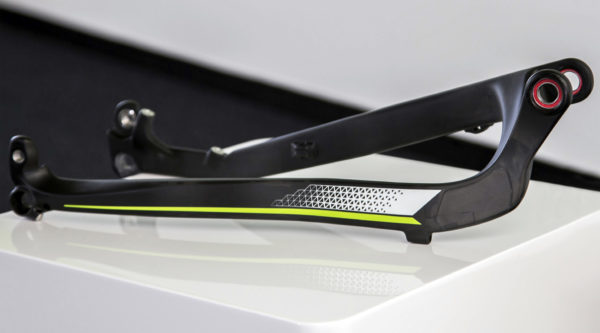 Word also has it that the XC race full-suspension Ninety-Six has updates in the works as well. With the Olympics this year, we can expect to see some premier Merida-sponsored men and women competing on new versions of the bikes, even though consumers will have to wait. Part of the wait is that Merida is overhauling their carbon hook-up with better materials now becoming available in bigger quantities, but also a newly designed and stiffer rear end with shorter, asymmetric chainstays and Boost spacing in the wings…

Nice diamond chainstays. I wonder how they get around the Specialized patent.

by owning a very significant portion of specialized… Basically Merida saved Specialized when it was going under. That is part of why you don’t see Merida in ‘Murica.

Ah, just looked that up. Apparently Merida owns 49% of Specialized since 2001. Didn’t know that.

Does Merida even sell products to the States yet? Why even bother looking at their new releases?

What with that whole internet thing existing, it means that Americans aren’t the only ones visiting this site.